I decided to ride the LC-11 Rally. LC for Lower California and 11 for eleven hours of fun. The rally started in Yuma, AZ and finished in San Diego, CA. On Friday, April 29th, Eric and I left home and headed toward Yuma, about 425 miles. We had a leisurely ride but for the terrific winds going through Las Vegas. Wow! Cheek clenching winds through heavy Vegas traffic on I-15. That certainly kept me alert! Our route to Yuma took us down Hiway 95, a two laner all the way to Yuma. I have fond memories of Hiway 95 as that is the route I took on my first Saddle Sore 1000.

We arrived at the designated Motel 6 in Yuma with plenty of time for a hot shower and clean up before meeting up with the Rally Master and other riders for dinner. Following a decent meal and lots of BS, we returned to the motel, got everything rally ready and retired for the evening.

Up at 4:30 a.m. or so, we re-packed our bikes, swigged some coffee and took off for the rally launch location at the nearby Chevron station. We had a half hour or so window to launch. Our gas receipt was the start time - as long as it was before 6:00 am. We waited quite a while to get some light going. About 5:46 or there abouts we fueled up and started our rally.

Eric and I had both received the rally packet one week in advance and planned our own routes. After route planning we realized we had both planned basically the same route. My initial attempt was a bit more aggressive but after discussion, I cut out some bonus locations and we agreed on what we thought to be a doable route in the time allowed. Turns out most of the other riders were on the same route as we were.

First bonus stop was Swasticka Bridge on Laguna Dam Road, an in and out of about 8 miles with the last 0.3 mile being an easy gravel road. I immediately spotted the bridge, got turned around and snapped the photo. Poor Eric blew past it and went further down the road before he realized his mistake. I was considerate and waited :-) 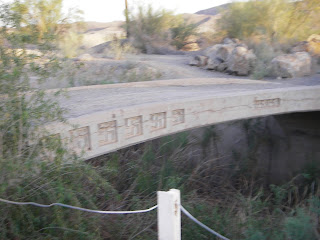 Next on our bonus list was the Yuma Duster, an anti-aircraft gun parked at the Yuma Proving Grounds Museum. Our goal was to write down the lettering on the front hatch. Teddy's Roughriders! Second bonus done. From there is was scoot up Hiway 95 to Blythe. Just about 15 miles north of Blythe are some Intaglios which are gigantic human, animal and geometric figures on the ground surface. Our task was to take a photo of the "Animal and Spiral Figures" information sign. What wasn't in the bonus instruction was the fact that the road to the Intaglios was not just gravel, but real rough, big rock, rutted, washed, interesting off road riding. My little GS roared over the crud and up the hill with no problem. I got myself turned around and pointed in the out direction then crawled between the fencing, ran across the field, down the valley, up the other side and snapped the required photo. I then ran across the field, down the valley and up the other side to crawl between the fence so I could re-mount, tackle the rough road and get to the highway. Oh what fun! 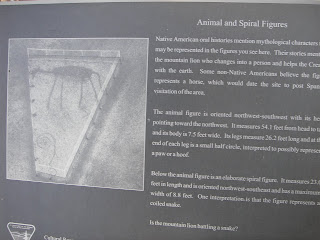 Next on the agenda was the Gateway Park Armed Services Memorial. From Blythe, we hopped on I-10 for a short jaunt to the Memorial. The instructions said to place your helmet (without your head in it) over the marker of the branch of service of your choosing, take a picture and say which branch of the Service your helmet is resting. I put my helmet on the Marines pillar. (Oh, it's the nice, new Schuberth C-3W helmet on it's maiden voyage!). 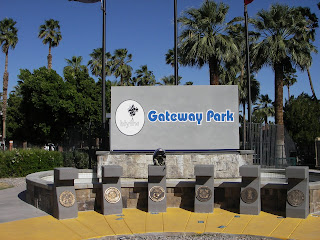 From Gateway Park, is was a long slog across I-10 in high winds. It was quite the adventure to come up behind a semi-truck, feel the turbulence off the back end coupled with strong side winds, start the pass to have the wind blocked so instead of leaning all of a sudden I was upright. Then completing the pass to have the huge gust hit me again. I was literally diving into the right lane after the pass. What fun :-)

We were heading to Mecca, CA where our goal was to take a photo of the Gracie Salazar fountain with the flagpole in the background. Nice Ms. Garmin took us directly there and photo scored! 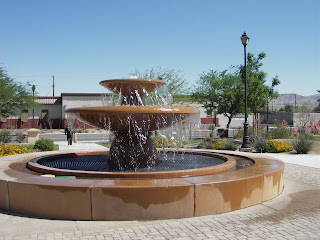 The next bonus location was Salvation Mountain. No picture required but dang, I wish I had taken one. It is quite a site to see. Next time I'm in that area, I'll definitely take a picture or two. Our task was to find the plaque from the "Folk Art Society of America" and write down the name on the plaque. We rolled into a dirt/gravel parking lot with the wind going full on. Eric ran off but I walked over to a fellow reading a book under a canopy. He looked like he belonged at that strange place so I very politely asked if he could direct me to the plaque. He gave me directions and I ran over to the place he described and yup, there was the plaque. We got the required information, hopped on the bikes and took off for our next bonus location, the Whistler Mud Pots.

Oh, what an adventure getting there!!! We were warned it was a dirt road but little Ms. Garmin took us down several semi-paved or at least hard packed roads and then said to cross the bridge and take a sharp right. Okay, we did just that. Oh my heck!!!!! It was a goat trail. Very narrow, rocky and tall bamboo or willows on each side as there were irrigation canals. We were between two canals and guess what? The trail stopped. Dead end. Like if you went any further you'd be in the canal. Oh eff. We have to turn around. Did I say it was narrow and rocky with deep water on either side. Dang, that was scary. I somehow managed to get the little GS turned around without falling down or dropping her. After we got off that trail it took TWO cigarettes to calm down.

As Eric was patiently waiting for me to calm down, another rally rider came by and pointed us in the right direction. Easy, peasy. Instead of the sharp right, take the next one then a left and there they were, the Whistler Mud Pots. The instructions said to take a picture of the geothermal activity, so I took this picture. We then found the proper approach road which was dirt but I was able to ride along about 40 mph no problem. Of course Eric was doing 60 but he kindly waited for me at the highway :-) 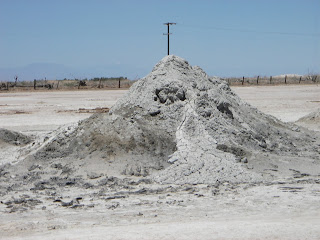 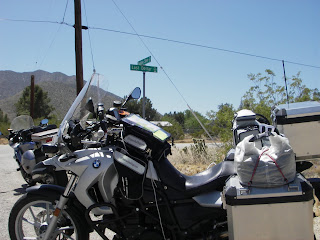 Next stop was the Butterfield Ranch where we needed to get a receipt. I hadn't eaten all day and was feeling kind of shaky especially after the Mud Pot fiasco. I walked in and spied some applesauce donuts covered in maple frosting on the counter. I didn't need to look any further. Donut and receipt in hand, I practically inhaled that donut. Eric, being the kind person he is, insisted I eat some cheese and crackers and an apple rather than rely on the sugar high. 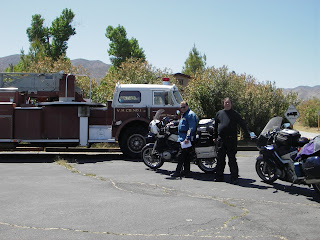 From there is was on to Julian for a photo of the Julian Veterans Memorial. The ride there was fantastic! What terrific roads are hidden amongst the hills in Southern California. Julian is an artsy place and thus tourists and bikers were everywhere. We managed to find the cemetery, climb up the hill and snap the required photo with helmet. 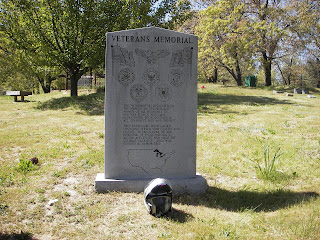 Leaving Julian was SLOW. Tons of traffic and large motorcycle groups doing about 10 less than the posted speed limit. Ugh. We had intended on snagging the Arizona Cafe bonus to give us a combo but traffic was slow and we decided to head for the barn rather than be a DNF. Smart choice because traffic just got thicker and slower as we made our way to I-15.

We arrived at the finish with time to spare and only a few other riders came in after us. We were treated to chips and salsa and soft drinks while we waited to be scored. We didn't lose any points at the scoring table. Woohoo! All photos were good and all required receipts neatly labeled with all the appropriate information. Our rally pack required us to keep odo posting for each bonus as well.

Following scoring, San Diego BMW bbq'd a fabulous dinner for us, hamburgers with all the trimmings, rib eye or sirloin steak, potato and macaroni salad and ice cream for dessert. Wow! After our fine meal the results were announced. Peter Perrin was the hands down winner with a fantastic score! Yay Peter! Eric and I finished 6th which was pretty much in the middle of the field and we both felt good about our route and the ride.

Craig Chaddock did a superb job as Rally Master (or Bastard depending on which road I was riding). I got a lot of good practice on some easy and some difficult dirt/rock/gravel roads which I needed. The bike ran flawlessly and all my farkles worked just how they are supposed to work. It was great riding with an aux fuel cell.

Next week I'll be heading to Okalahoma for The Rally - IBR Shakedown. This will be my final practice rally before the Big Dance. I hope it will be as successful as the LC-11.