Houston, We Have Bacon!

Today was going to be our longest yet scooter ride yet so we got up early.  Well, early for me and we were out the door and headed down the road by 8:00 am.  First we topped off the gas tanks and then jumped on the Natchez Trace going north.  About 30 miles later we took an exit and proceeded in an easterly direction following small, rural, two lane roads.  For the most part our speed was around 55 mph and fortunately we encountered very little traffic.

Our goal was Houston!  Yes, another Houston, hahahahaha.  This time it was Houston, Alabama home of Chef Troy's Talk of the Town Restaurant.  Houston, AL is also home to the country's only surviving log jail but more on that later.

After riding a bunch of miles we made a bootie stop.  We pick the most scenic and interesting places to take a break 😄 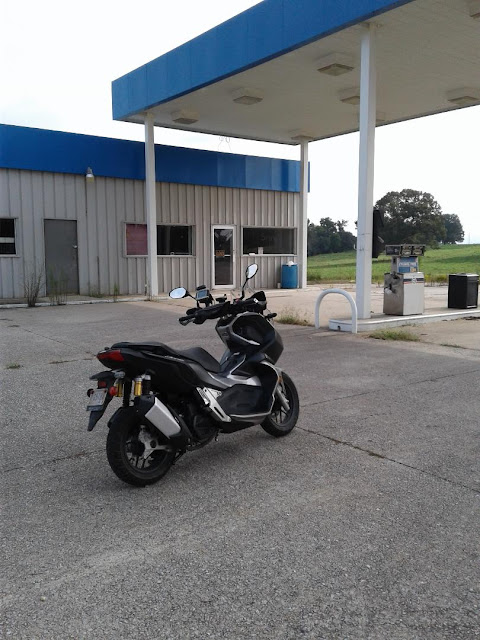 We continued our journey with an overcast sky but no rain.  Temps started out at 73 degrees and reached 90 by the end of the day.  Most of the roads were in good condition and we just scootered along.  After 120 miles we came into Houston, AL.  First stop was the historic jail. 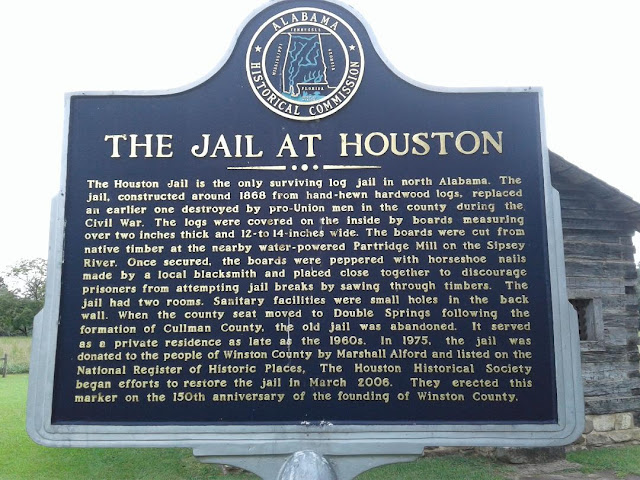 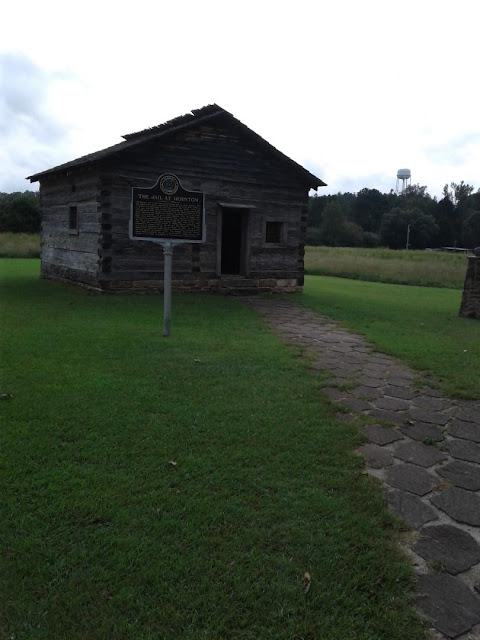 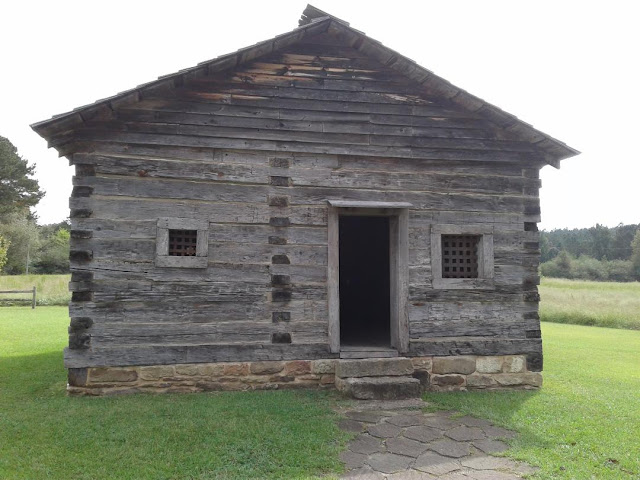 In addition to the jail there were other things to see and learn. 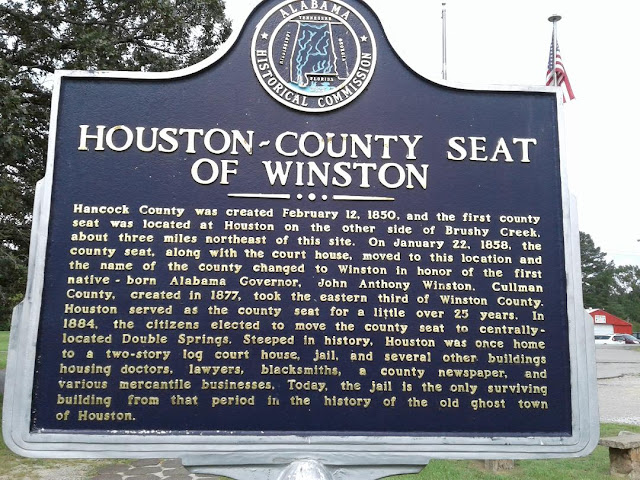 There was a Howitzer cannon on display in the yard. 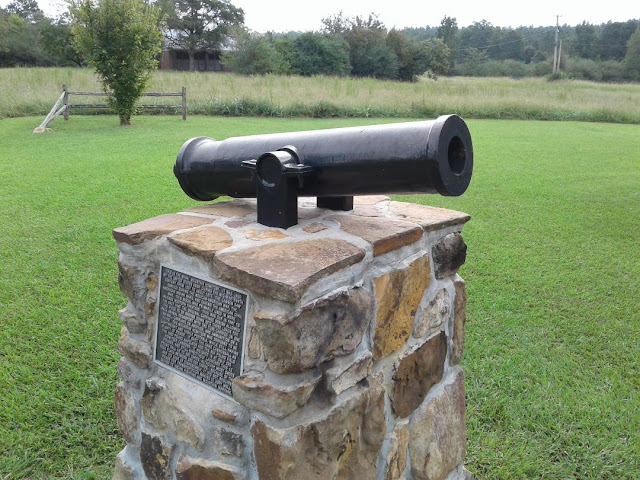 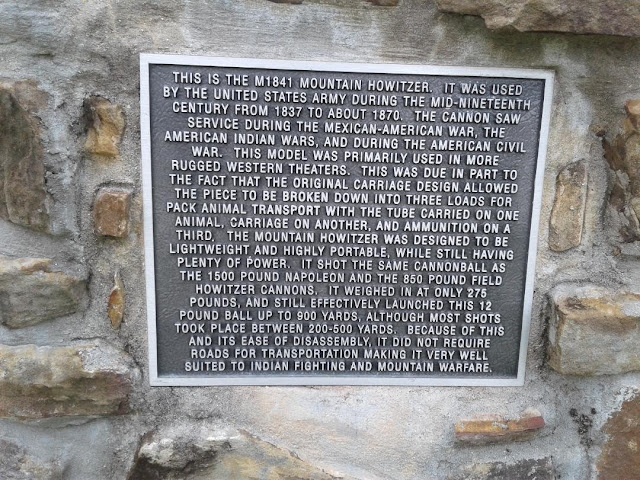 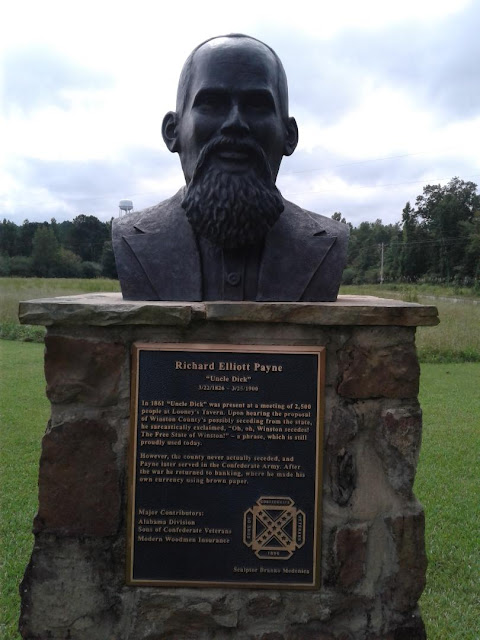 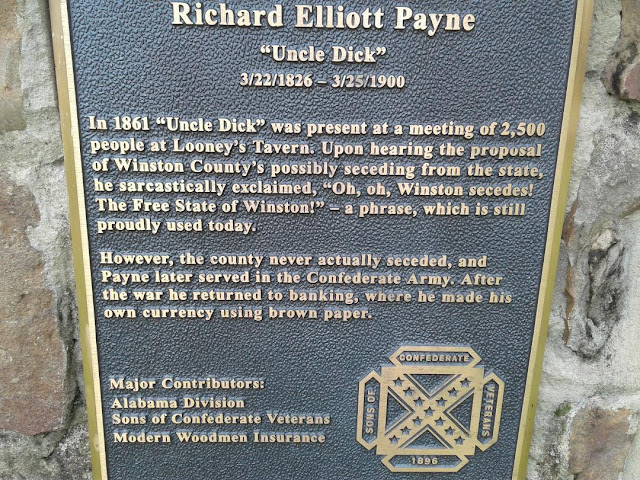 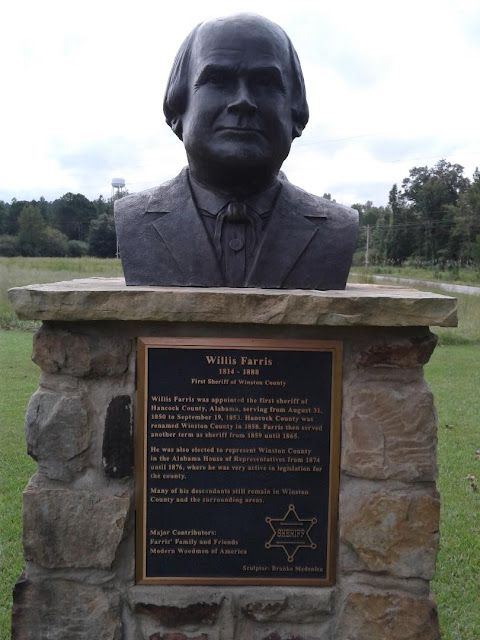 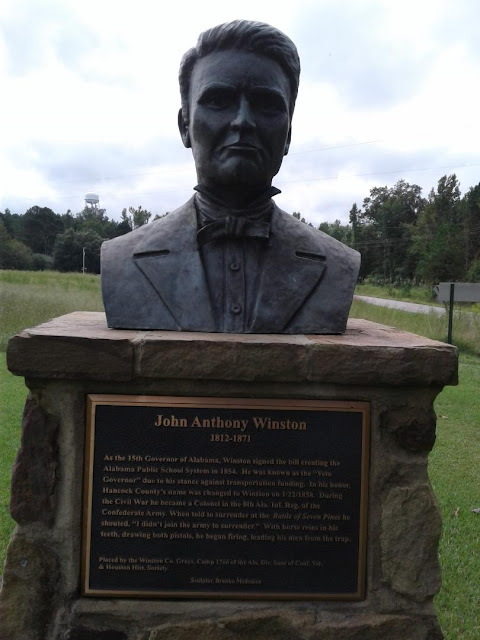 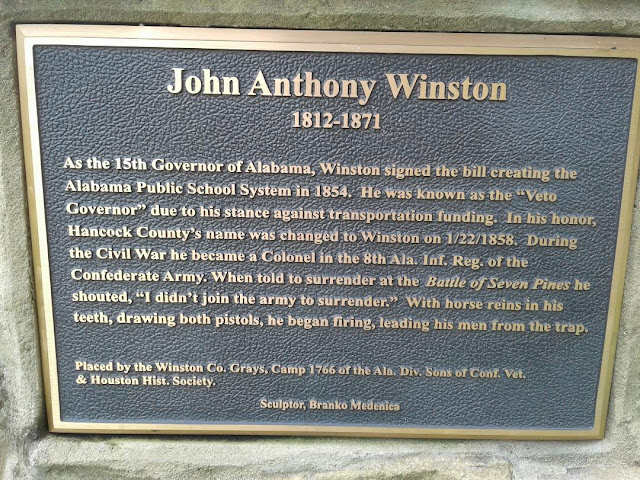 That concluded our little visit to the Historic Houston Jail and we made the arduous trek across the street to the main attraction, Chef Troy's Talk of the Town Restaurant!  Eric had previously been to Houston, AL to take a picture of the Historic Jail for one of his tag games and stopped at Chef Troy's and looked at their menu.  When he came home that day he described the restaurant and menu to me.  I'm a sucker when it comes to a full American Breakfast and Chef Troy's seemed to offer all the good stuff and they serve breakfast all day long!!!  Oh, you can also get lunch or dinner as well.  But I was only interested in the brekkie offerings!

Chef Troy's did not disappoint!  The exterior is not fancy or modern and the interior wasn't either.  The food though - the food - was AWESOME! 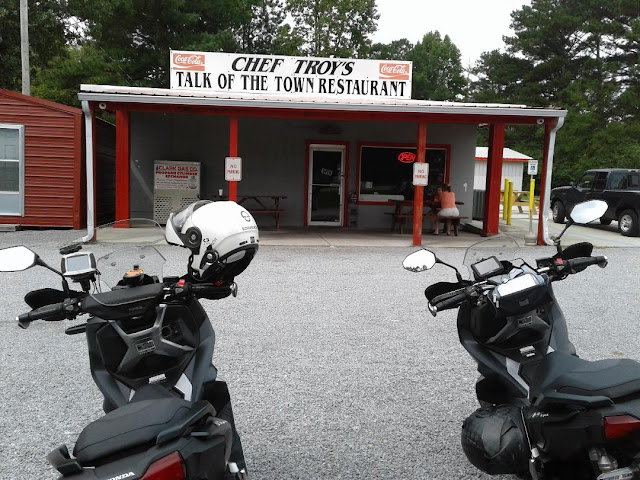 Eric order chicken fried steak with eggs, hash browns and toast.  He said the chicken fried steak was one of the best he has ever had!!   When he asked for hot sauce the server described a myriad of sauces and he ended up with Siracha, a Habenero sauce and Texas Pete.  He was a happy camper with no complaints as he sauced his eggs and hash browns with hot goodness. 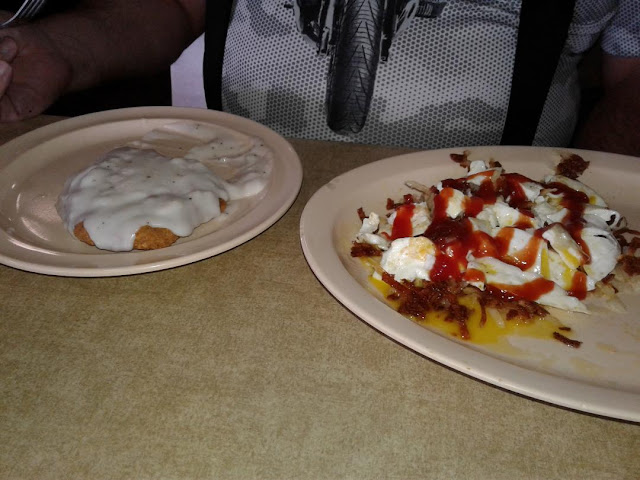 I ordered bacon, scrambled eggs, hash browns and toast.  OMG!  The thick cut bacon was cooked perfectly and so full of flavor.  To die for!!  The eggs were perfect and the hash browns nice and crispy on the outside and soft inside.  The french bread toast was a superb complement to the meal. 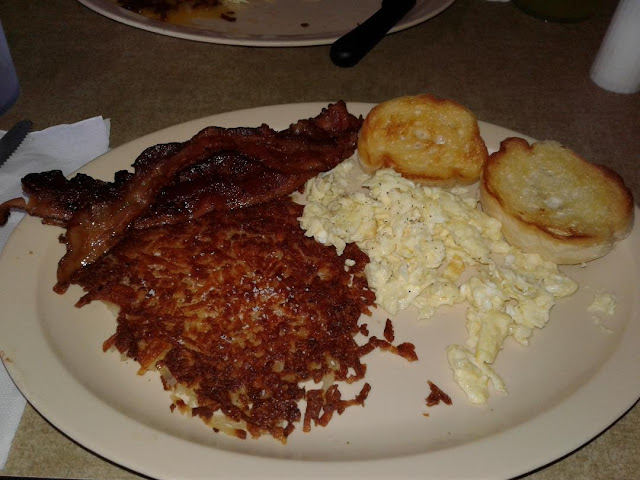 Chef Troy's Talk of the Town Restaurant served us an outstanding meal with great service and a reasonable price.  Heck, I'm tempted to go back and try some of their other menu items.  No, I'm not tempted, I WILL go back.  It's worth a road trip.  I can't wait to try their French Toast with a side of that delicious bacon.  Then I'll have to go back again to try a lunch or dinner.  Put it on your "To Do" list. (Yes, they were practicing good social distancing and wore masks.) 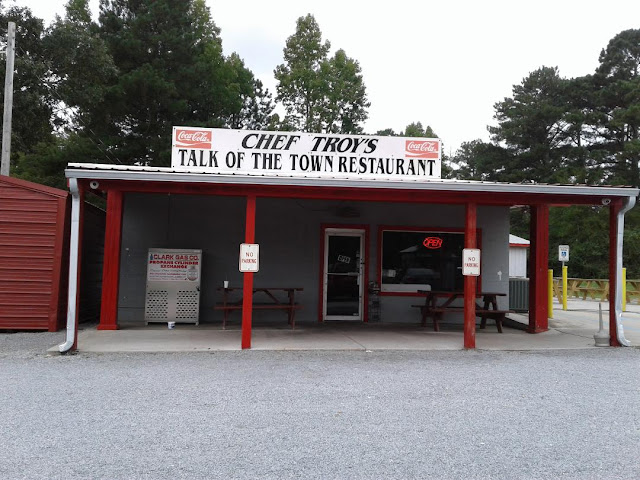 Fully sated we re-mounted the mighty scooters for the return trip home.  Again, we stayed on very rural highways.  We didn't retrace our route but instead made a big circle.  Northwest Alabama is hilly and some of the roads were like roller coasters!  Up, down, up again, down again.  Big silly fun especially because on the down hills we would go WFO to get enough momentum to take the uphill without falling below 45 mph.    Hahahahaha.  We both got the scooters up to 66 mph at some point.  Eric said he felt the limiter on the scooter at 66 mph.
After a while it was time for another bootie break.  This time we chose a slightly more scenic place to pull off the highway in Hamilton, AL. 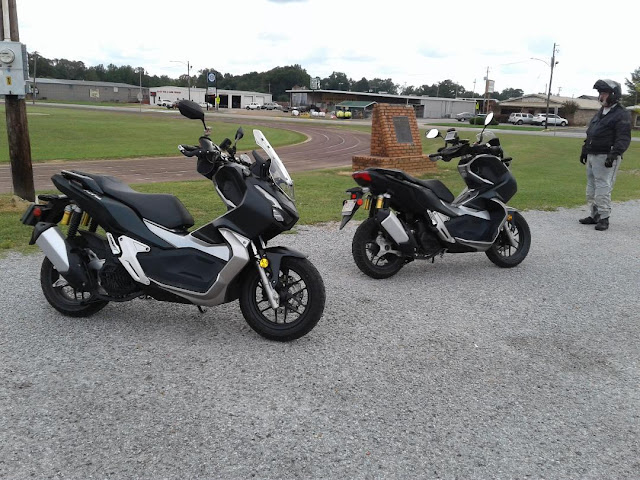 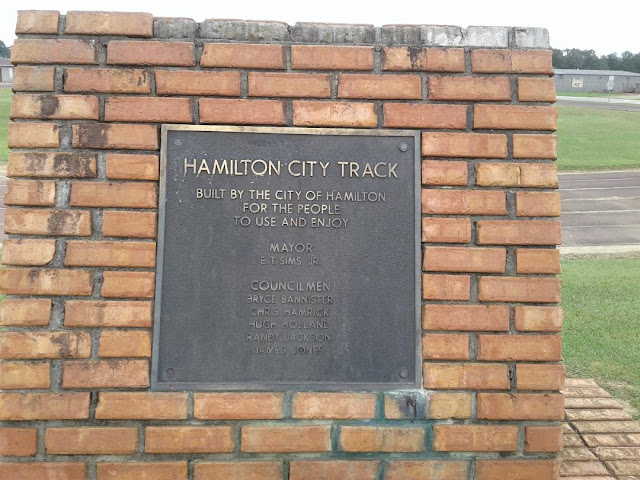 Back on the highway we finally crossed the state line and were back in Mississippi.  A quick stop in Amory to shake out the bootie yet once more. 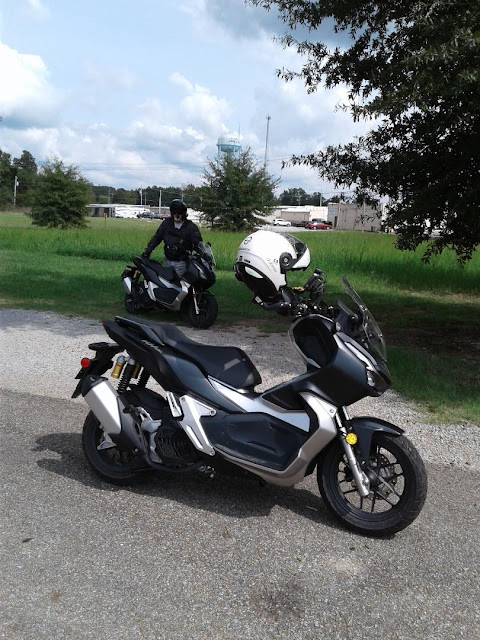 And then ... we were back on the Natchez Trace only 20 or so miles from home!  Hooray!  Of course a stop on the Trace is mandatory!  Isn't that just the cutest little scooter?  Just wish the seat was more comfortable.  I suspect the more I ride the easier the seat will become.  And if not, well there are plenty of custom seat makers!  We'll see if it comes to that or not. 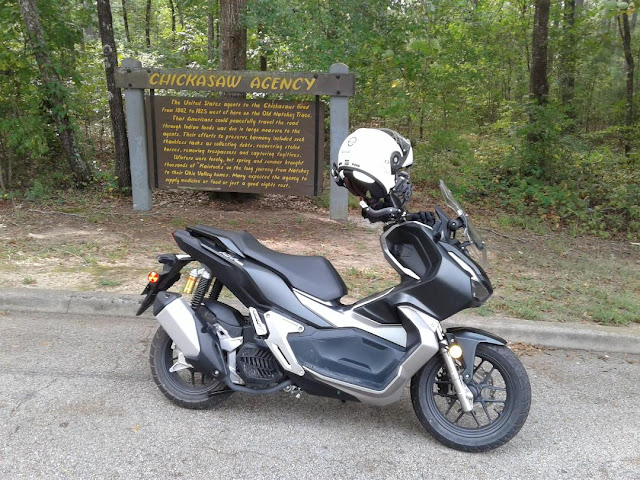 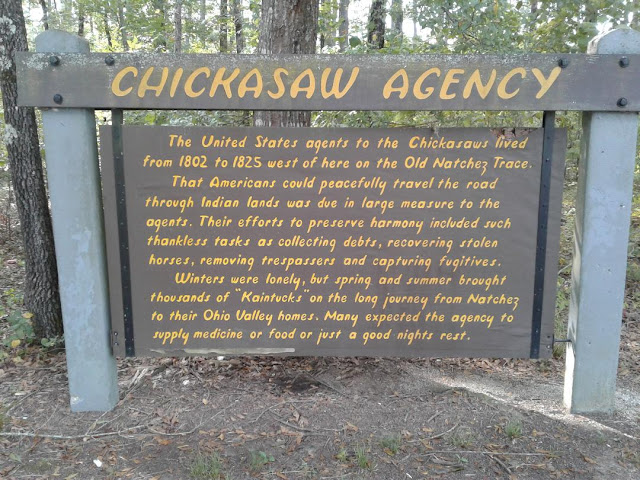 Our round trip ride to Houston, AL was 262 miles.  We left Tupelo at 8:00 am and got home about 3:30 pm.  We probably averaged 50 -55 mph.  I got around 84 mpg and Eric managed about 70 mpg.  We started out with full gas tanks and had two gas stops along the way.  The scooters performed flawlessly and we are now just shy of 1,000 miles on the odometers.  I'm thinking I need to ride a lot more and get my bootie toughened up for the Scooter Cannonball Run next summer.  Good thing I have a few months to make that happen!
As always, thank you for following along on our adventures.  Don't know yet what's next but it's sure to be interesting ;-)
Cheers,
Cletha