After way too long searching for someone to fabricate a custom mount for an auxiliary fuel cell for the F650GS, I finally scored with D. Ironworks. I had taken the original mount and bike to another fabricator who told me no problem, a day or so. Well, a week later, they hadn't even touched the mount and the bike was dusty from sitting in their shop. And, to make matters worse, I went a week without riding. Aaarrrggghhh! Frustration!

That, and I had to have a friend follow me to the shop (all the way across town) to give me a ride home. Then a ride back to the shop to pick up the bike. Good thing I have kind friends!

So, I collected the bike and mount, came home and let my fingers do the walking through the yellow pages. Yes, the old fashioned paper type. A nice ad jumped out at me, D. Ironworks. So I gave them a call and explained what it was that I needed. Doyle, (the D. in D. Ironworks) said bring her on down and let's have a look. So, that is just what I did.

Doyle and his son, Kyle looked over the mount and my bike. We discussed what was needed and how things were supposed to work. They felt confident they could make something for me. So, I left the bike and the mount and had the same good friend take me home. The next day, Doyle called and asked me to bring in the actual fuel cell that would sit on the mount. I complied and we had further discussion as to how this whole thing should work.

I think this was mid-week. On Friday, I called Doyle and said I needed to pick up the bike for the weekend. Really, I just needed to ride. So, collected the bike and had a great weekend riding around the local area. Took it back Tuesday for the finishing touches. Doyle and his sons, Kyle and Tony, had re-worked the whole frame, especially where it attaches to the frame to give me a custom, absolute true connection. They also painted the mount and it looks terrific.

Doyle and Tony attached the mount and then we put the fuel cell on and secured it. Then, the custom Linda Tanner fuel cell cover went over all. The photos below are the end result. I couldn't be more pleased.

I still need to get it plumbed and test it all out but I really think this is a good solution! Oh boy, now I'll have 8.5 gallons of fuel :-) 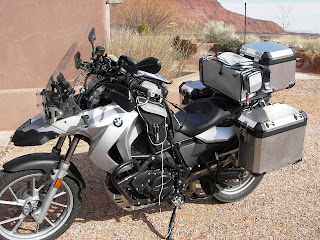 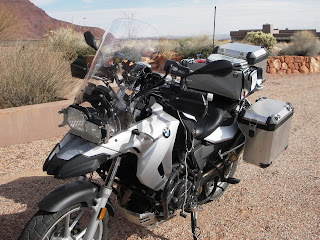 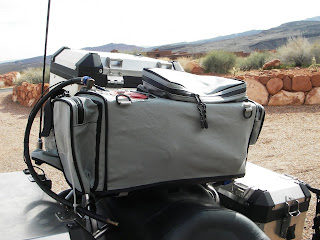 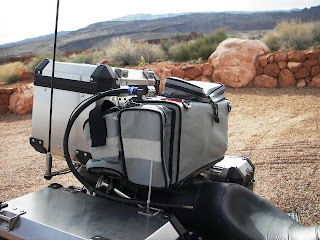 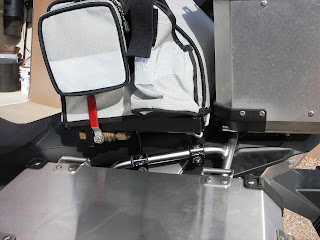 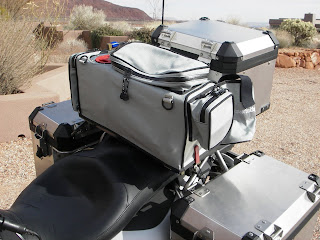 It seems like I'm making baby steps to get my sweet little BMW F650GS rally ready, but I am making progress! Last few items include plumbing the fuel cell, adding an electronic cruise control, radiator guard, aux lights and highway pegs. Then, I think I'm done with farkles and just need to ride, ride, ride.
Oh, there is that little problem that popped up over the weekend - the CB lost all power and all audio (XM Radio, ZUMO come through the CB). The Zumo is getting power but not the CB. I've spent a lot of time going through the wiring but to no avail. I cannot find the problem. So, when I take the bike to have the rest of the farkles installed, I'll have them troubleshoot that issue as well.
Oh that and practice entering waypoints and routing. Just got a new Lenovo ThinkPad and added solid state drive to make it rugged enough for transport on the motorcycle.
So close, yet so far away. Just so you know, I got accepted into the Big Dance that starts late June and want the bike completely set up, tested and totally comfortable long before Waltz Day!
Cheers,
Cletha