I just couldn't wait to start riding toward Denver so I departed on Monday for Bluff, UT. The Spank rally was in process and the checkpoint was in Bluff, UT on Tuesday at noon. Tuesday morning I met up with George Z., the Rally Master, and a couple of riders who were going to participate in the 2 day Spank for breakfast. 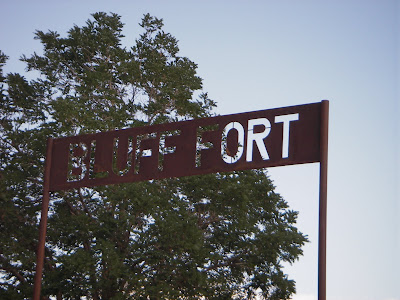 Although not planned, I ended up helping check in riders as they came to the checkpoint. It was good fun to watch them arrive and hear their stories. Lots of dropped bikes which made for good story telling and some roadside repairs. Apparently, George provided bonus locations that were somewhat interesting and challenging. I saw mirrors missing, duct taped windshields, duct taped tupperware, zip tie repairs and others. 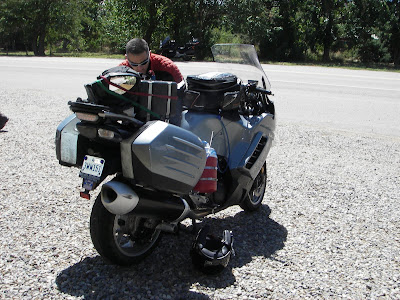 I think Robert Bolger is missing a mirror!!! 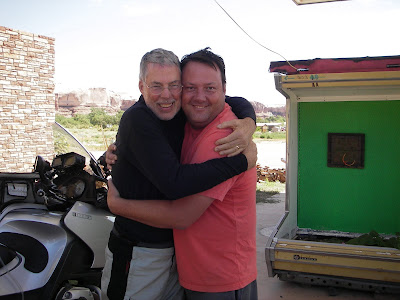 Peter was sooooo happy to see George at the Checkpoint 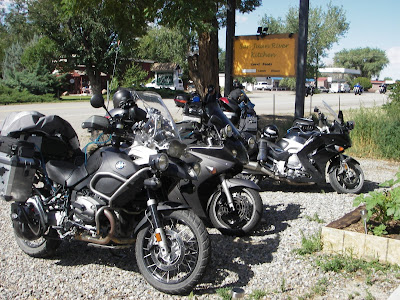 Riders starting to arrive at the Checkpoint 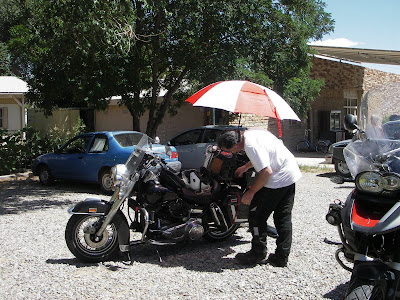 The umbrella dude! How cool is that?

After the riders left the checkpoint, I had a leisurely ride to Durango, CO where again I met up with George for a few brews at the pub and ribs at a BBQ joint. The next morning I spied Dennis Powell and Peter Perrin at the breakfast buffet at my hotel. What???? Spank riders actually rest???
Later that morning I went to the Brew Pub checkpoint to witness George performing unnatural acts. This was a bonus location for the riders. Heidi Still, Chris Ogden, Peter Perrin and Dennis Powell all showed up at the appropriate time to see George washing his bike. Good fun! 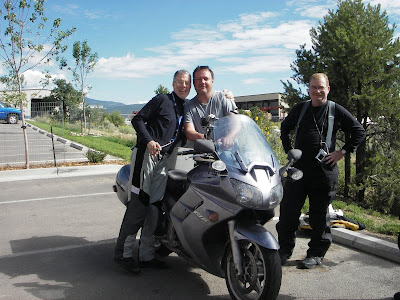 Peter Perrin is happy to see George yet again as Chris Ogden looks on fondly. 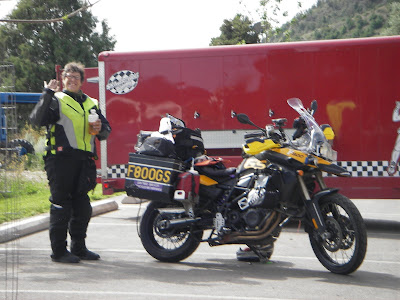 The lovely Ms. Heidi Still at the Brew Pub bonus
Chris and I were headed the same direction so we rode together and I got to see several more of the Spank bonus locations. We rode over Wolf Creek Pass (absolutely stunning) and stopped at the Desert Sand Dunes National Park. Who knew there were sand dunes in Colorado? It was great fun and I got three (yes 3) stamps for my National Parks Passport. Whoopee. 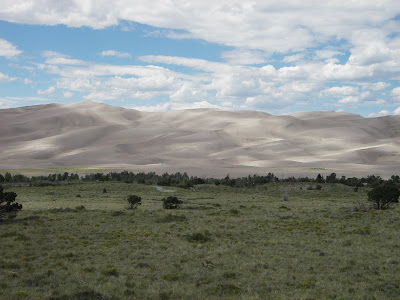 Sand Dunes in Colorado - who would of thunk?
We then rode on to Bishop's Castle. What a surprise in the middle of nowhere. First, great, twisty roads getting there lined with trees, boulders, streams. Just perfect. Then, at the top of the pass, the Harry Potter looking castle complete with dragons. Awesome. The ride over the other side of the pass was even better. There was a big sign that said WARNING - MOTORCYCLISTS USE "EXTREME" CAUTION. Oh boy, nice twisties!! I'm still laughing out loud about that road. Fantastic !!!! 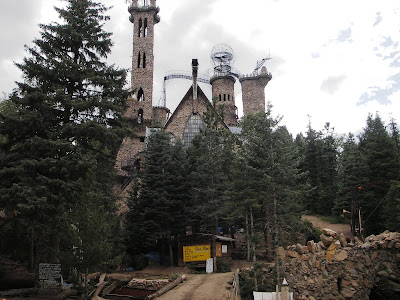 Bishop's Castle - simply amazing!
After Bishop's Castle, we turned toward Pueblo so Chris could get a shampoo (another Spank bonus) and I could stop at a liquor store (a Cletha bonus). We accomplished both tasks quickly and hit the interstate toward Denver. We arrived in Denver shortly after 8:00 pm. Time to start the Iron Butt Association National Meeting! 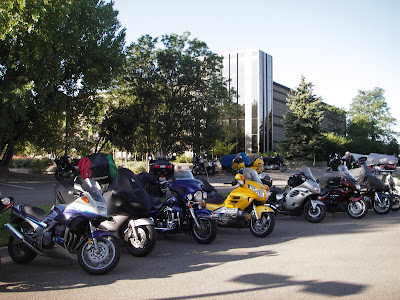 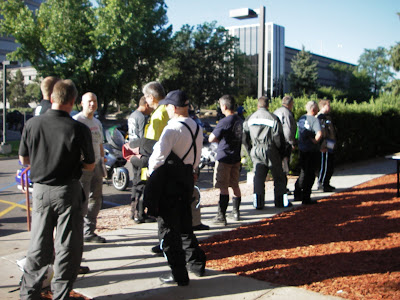 Thursday was check-in, mingle, kick tires and tell stories. It was such fun to meet people in person that I had only met in cyberspace or had heard stories about. Great to put a face with a name. 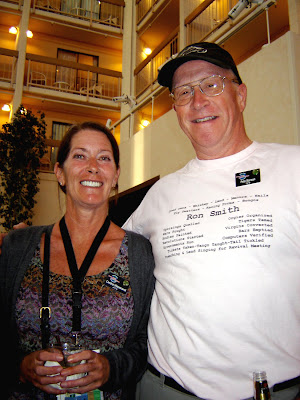 I finally meet Pete Bansen - a Facebook Cyberspace LD Friend! (Photo by Chris Ogden)
Thursday night was the Spank Rally awards banquet which had good bbq on the menu. Winners were announced and presented beautiful paintings of motobikes done by George Z. What an accomplished guy, that George! 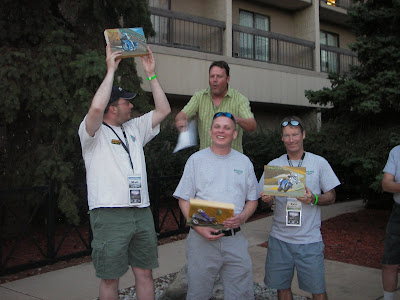 Top three Spank finishers with Rally Master, George Z.
Friday offered keynote speakers and breakout seminars. Everything I attended was amazing and chockfull of useful information and tips. I took lots of notes. Both lunch and dinner were sumptious and entertaining. I was so thrilled to meet the legends of LD riding. Kinda like a little groupie - I was in awe.
Saturday again offered keynote speakers and breakout seminars. I also attended the tire plugging demonstration in the parking lot and successfully plugged a tire. I hope I never have to in real life - but I think it is a very good skill to have. So, now I know how to thanks to Mr. Brian Roberts. I also attended the Aux Lights shootout. That was very educational and a ton of fun watching Matt Watkins do his deer prance in the headlights! Congratulations to Ray Blair for beating up the competition and walking away with first place. 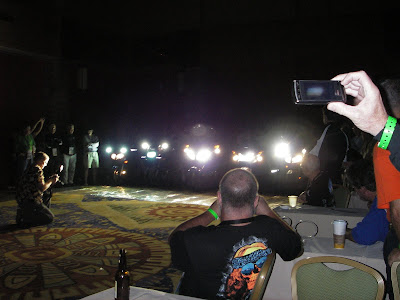 Aux Light shootout - can you guess which one is Ray Blair?
Lots of tire kicking and looking at bikes in the parking lot. It is amazing some of the things people come up with for their bikes. It gives me lots of ideas :-)
Again, another terrific lunch and dinner. This was a first class event attended by first class people and hosted by first class people. Kudos to those that made it happen. 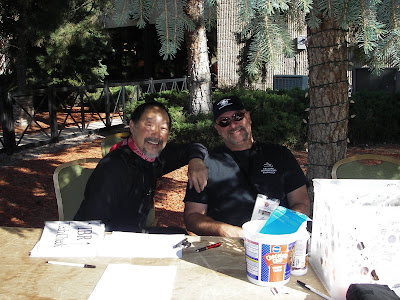 Dean Tanji and Dale "Warchild" Wilson (I'm such a groupie).
And then, suddenly, it was time to leave. Sunday morning I met up with Chris Ogden again to ride home. I wish I could say it was uneventful - but it wasn't. Unfortunately Chris had a medical issue and about 70 miles west of Denver we had to stop at a hospital. Many hours later, Chris was released (he is fine now) and we headed homeward. 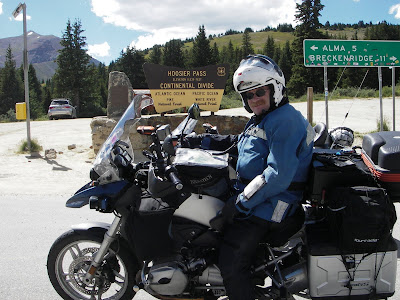 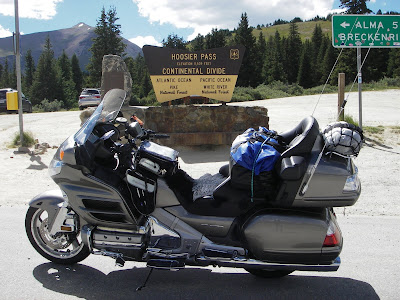 My steed at Hoosier Pass.
We stopped at a blink your eye and you miss it town for a late lunch. Only we missed it so had to turn around. This is where I dropped my bike! Yes, after almost 100,000 miles of riding, I finally dropped the sucker. Turning around, not enough throttle, too tight turning right and down she went. I just let it go and stepped off. Shit. Oh well, an opportunity to try the pick up bike technique. Chris ended up helping me but I think I was close to getting it up by myself. A very nice cager stopped immediately to offer assistance. I thought that was nice. All just part of the adventure!! (I think Chris got tired of hearing that from me).
We only made it to Gunnison, CO. After a good night's sleep, we were up and ready to ride the rockies! I should mention that I've been on the Million Dollar Highway 5 times and it has ALWAYS poured down rain on me. But, I thought, gee, I'm going to ride this in the morning not the afternoon. I should have sunshine!!!
Ha. Not. It was raining when I woke up. On to Montrose where we would turn south to hit the passes. Not looking good.......No, it wasn't good. It was a real gully washer, a frog strangler, a downright downpour. For miles and miles and miles and miles. Well, you get the point. I quickly find out my water resistant pants are not very water resistant and my waterproof jacket isn't at all. Should have put the Frogg Toggs on. I know they work. Oh, well, all just part of the adventure. Even though I couldn't gawk about the scenery because I had to focus on the road I still had a grand time and again was laughing out loud. Good thing it wasn't cold on top of the wet :-) 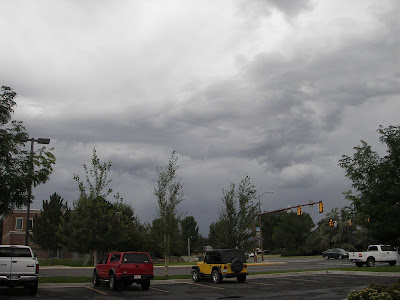 The view of what's to come from Montrose, CO. It got worse.....
We stopped in Silverton and had lunch at Grumpy's followed by their delicious apple crisp. 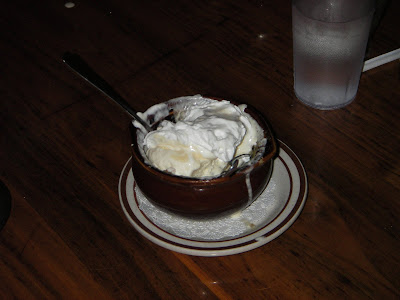 While there, another downpour flooded the main street with a 5 foot wide 1 foot deep river. LOL otherwise I might cry. Nah, it was all good. 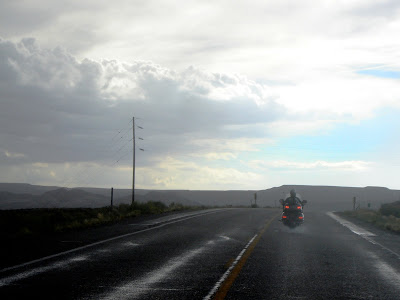 Me coming out of the storm (photo by Chris Ogden)
Pressing on from Silverton, we avoided cows and wild horses on the road and land again in Bluff, UT for a fuel stop. Looking west from Bluff was scary. The sky had that tornado cloud look about it. I suggested we wait in Bluff until it passed as there is no shelter on the road and a long way to anything. Good suggestion - we waited and sure enough, the wind blew in and the torrential downpour started.
Leaving Bluff about 6:30 pm. It's still 6 hours to my house. We move on. The ride through Monument Valley was beyond spectacular. A photographer's dream. Black clouds in the background, the rock formations bathed in sunlight and rainbows everywhere. Wow. Thank you God. 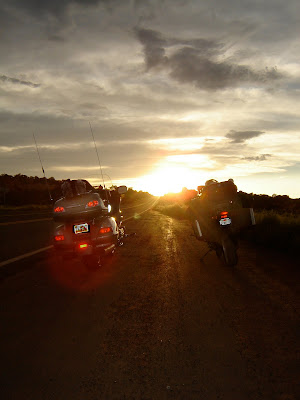 About 60 miles east of Page, AZ at Sunset (photo by Chris Ogden)
We stopped for dinner in Page, AZ and considered stopping for the night - but heck, almost home now so on we went. Another quick rest stop in Kanab, AZ and a quick stop in Washington, UT. Then.......HOME at 2:30 am or so. Blessed home. So glad to be home.
I had a wonderful, incredible time. Fantastic riding through the rockies. Met awesome people. Learned a ton. This kind of adventure just serves to remind me how lucky I am and how much I truly enjoy riding.
Hey, the folks you meet aren't too bad either :-)
Cletha
Posted by Cletha at 3:04 PM