Oh boy, the first rally of 2011, The White Stag Rally (some might call it the White Stagger Rally). White Stag is held in Beatty, NV the last weekend of January. The 2010 White Stag was my first rally ever and I learned a LOT. However, the 2011 White Stag was to be a lounge rally with different participation events. Okay, sounds like a good time to me. I packed up the F650GS and headed toward Beatty on Friday. The weather was beautiful and traffic light. I cruised down Old Hiway 91 to I-15. Then through North Las Vegas to hit Hiway 95 which is then a straight shot to Beatty.

I made a quick stop at Yucca Mountain Truck Stop and spotted this: 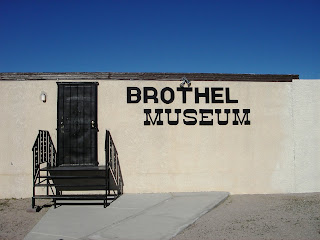 I don't know how I managed to miss this Museum considering all the times I've been by here. Located next door to the Cherry Patch II Brothel. I didn't go in but maybe next time.
After a pleasant 250 mile ride, I arrived at the Stagecoach Motel in Beatty and found several riders had already started kicking tires and telling lies. 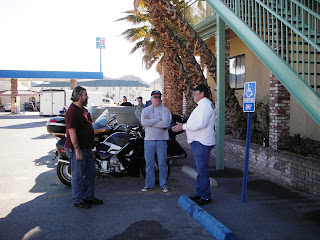 Patrick F. and Chris P. telling stories with a rider whose name I forgot (sorry). 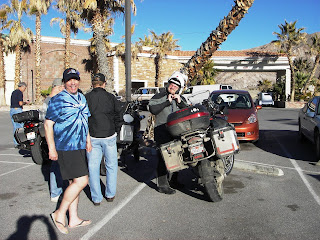 Doug B., Chris O. and Andy M. show up for White Stag fun. 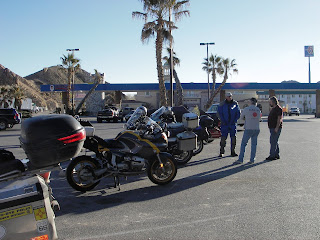 The parking lot starts to fill up with bikes of all makes and models. But most definitely, all set up for long distance riding! 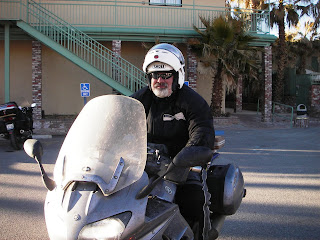 My sweetie, Eric V. finally gets to Beatty. I think he needs to wash his windscreen! 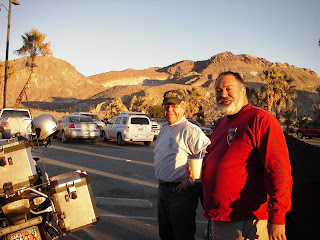 Eric and John L. preparing for the White Stagger. Unlike riding rallies, at a lounge rally, riders are encouraged to imbibe prior to, during and after the riders meeting. We tried our best to follow the rules. 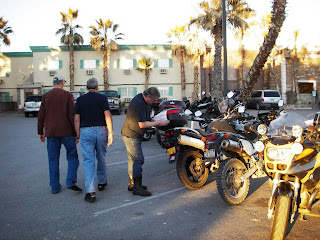 More riders show up, tell lies and boast about having the best rally bike and LD set -up. 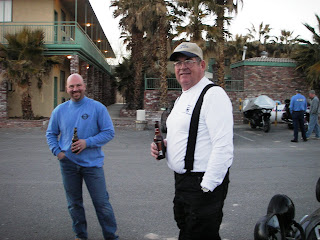 Much to my surprise, Gary D. showed up. Braving cold and snow from Idaho. 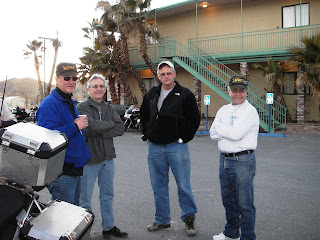 This is a motley looking group. Ray B., Steve H. and John L. along with another rider that I can't name (sorry again). 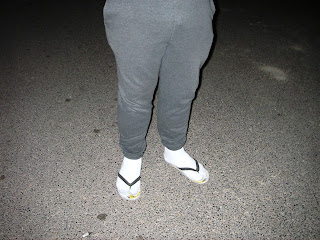 Fashionable footwear modeled by Doug B. I saw plenty of LD Comfort attire as well as interesting footwear in the parking lot. 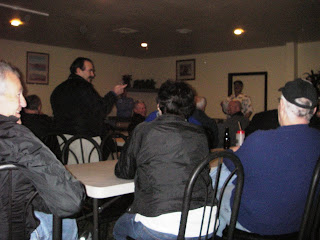 Gathering for the riders meeting. The rules were very simple. First checkpoint at Panamint Springs where the rider was to put at least 3 gallons of fuel in the tank, check the air pressure in both tires, get a receipt (no pay at the pump here - had to go inside the store). This was a timed event and open for riders from 8 to 11 am. I didn't get to the checkpoint in time so it didn't matter how long it took me :-) I did get 3.25 gallons of gas. Eric offered to time me but I declined.
Well, we missed the first event, damn. To console ourselves, we took a Twizzler break at Stovepipe Wells. 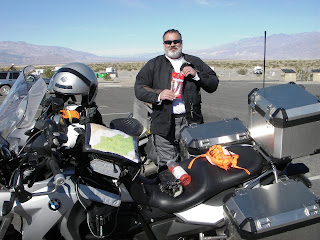 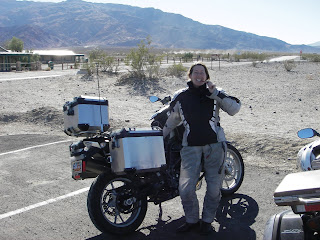 The next event, shoot the condom, didn't start until 1:00 pm. So having lots of time, we headed to Scotty's Castle where I finally got my Death Valley Scotty's Castle National Park Passport Stamp. I tried 3 times last year and each time I went there, the stamp was either broken or missing. Hooray! I now have all three Death Valley stamps. Well, until John L. told me of the secret Beatty, Death Valley stamp. So, next time I'm in Death Valley, I'll have to find that one. Just so you all know, there are 4 Death Valley Stamps - Scotty's Castle, Furnace Creek, Stovepipe Wells and Beatty. The Beatty stamp is hidden and you have to request it. Apparently there was a Visitor's Center for Death Valley in Beatty which closed. The stamp is now located at Furnace Creek but behind the counter. You have to specifically ask for it.
We met a number of rally riders at Scotty's Castle so took some time to kick tires and tell more lies. Then we were off again headed back to Beatty and on to Titus Canyon Road for some rifle action.
This was my first ride on gravel roads with the F650GS and boy, my BMW rocks on the rocks! Huge, grinning fun!!!!!
We arrive at the specified location to find a large group of riders lining up to shoot. Another timed event - blow up your condom and hang it on the target pole. Shoot the condom first and then go for the balloons. Five shots total and three targets. 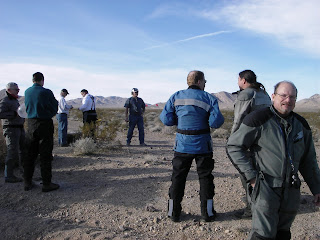 Riders at the shooting range. If you shot the condom, you got a special sticker! 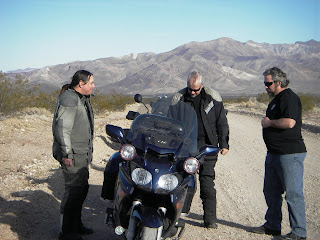 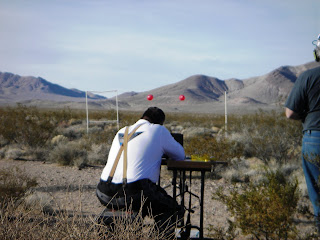 Eric V. sights in on the balloons after popping the condom. 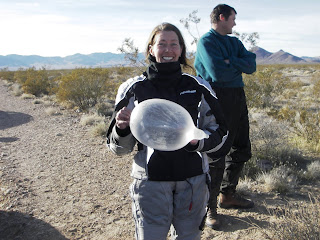 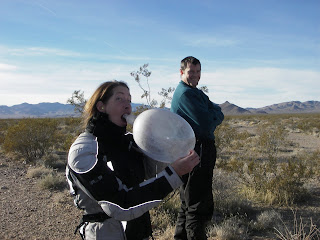 Yes, we were having a lot of fun! I finally got the condom blown up, tied off and ready to be hung on the target pole. 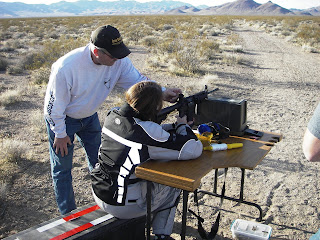 Tom gives me some instruction on shooting the AR-15 (I think that's what it was). Problem here - I'm left handed and have a dominant right eye. I tried shooting left handed but couldn't see down the sight. So switched to right handed. Forget being timed. This took forever!!!! Hahahaha. 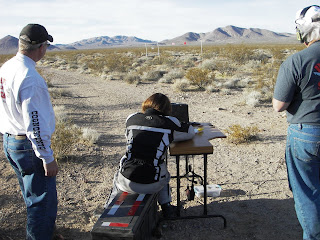 Yeah, baby. Sighting in, squeezing the trigger, POP goes the condom with my 3rd shot. I missed both balloons but was overjoyed at actually shooting the condom. 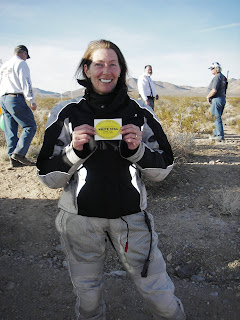 I win a sticker saying "I put a hole in my condom at the White Stag." Oh the joy!
The third component of the White Stag Lounge Rally was to complete a number of questions regarding the Iron Butt Rally and previous White Stag events. I answered some and others I just made up silly answers. It was good fun.
Prior to the banquet, riders enjoyed some lounge time. Heidi S. shows us how to blow up a condom. I think she is an expert! 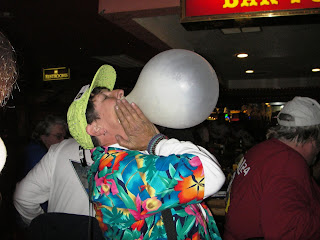 Heidi wins a door prize. Looks like she and Eric are having a fantastic time! 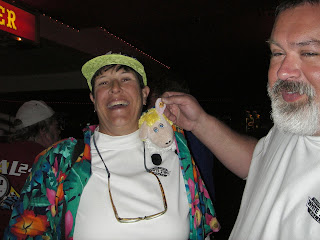 Riders impatiently waiting for the prime rib and baked potato rally dinner. It was delish. 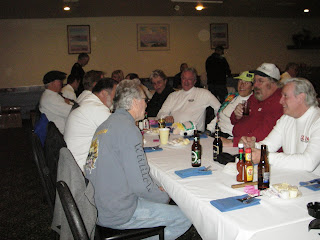 There were special mentions for some of the participants who performed well on the events. Pretty much everyone won some sort of door prize. I scored with a set of precision tools. Sweet!
Following dinner, we adjourned to the lounge where we had plenty of libations, dancing, telling yet more lies and having way too much fun.
The following morning I got up and almost everyone was gone! Wow....I spied Bob & Sylvie (the V-Twins) in the parking lot and they sat with me through breakfast. I slowly got my gear together, loaded the bike and headed out with Bob & Sylvie and their friend Jim. They turned off Hiway 95 toward Pahrump so I was on my own the rest of the journey home. Fortunately, it was clear and sunny (although I kept my heated jacked on low most of the time).
The wind picked up and a few times I thought it would pull my helmet right off my head. The F650GS was awesome in the wind (especially compared to the Goldwing) and I had no problems. Toward Mesquite, NV I could see lots of rain clouds but I got lucky and by the time I turned on Old Hiway 91, the wind had blown the rain away and it was sunshine all the way home.
In conclusion, White Stag was great fun. Tom and Jeff put together a terrific event and it was wonderful to hang out with everyone and play games. The best part of LD Riding and Rallies - you get to have good, silly, laugh out loud fun with the best people ever.
Cletha
Posted by Cletha at 9:19 AM