Alrighty then, the little F650GS was all farkled out and it was time for the 6,000 mile service. Well, okay, I had just over 7,000 on her but heck we were off to Las Vegas BMW for the service. I usually go to San Diego but Vegas is so much closer so I decided to take it there. 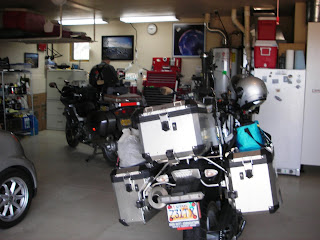 Here she is in the garage, all loaded up and ready to head to Las Vegas. 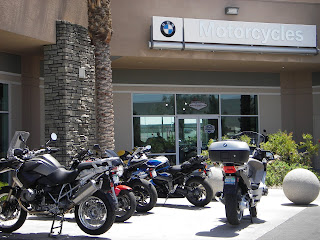 We arrive at Las Vegas BMW after 130 miles or so in some pretty good wind. Sunny and clear but windy. We took care of the paperwork and they took the little kitten into the shop to do their business. We hung out, looked at motorcycles, read magazines and just lazed about for almost two hours when we were told the bike is ready. Hooray! 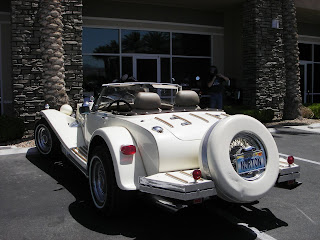 While waiting for the bike, this pulled into the parking lot. Cool huh?

We left Las Vegas and headed south toward Barstow, CA. About 20 miles south of Vegas, I notice what appears to be water on my windscreen. Huh? Where did that come from? It's sunny, hot like 100 or so. I assumed I'd passed an RV that was spewing water and forgot about it until heading up to Mountain Pass, CA on I-15, I notice more water on the windscreen. That's just not right. All the while, we were fighting extreme headwinds with the unpleasant occassional side gust. I was watching my temperature guage but all appeared okay. After Mountain Pass, yet more stuff on the windscreen. Something is just not right about this. I took the next rest stop exit to check it out.

Hmmm.....liquid on the INSIDE of the screen and it's not water. It is kind of oily with a very light bluish tinge. Really not good. I called Las Vegas BMW and told them what happened. They tried to brush me off but I wasn't about to let that happen. Heck, I'd just had a service 70 miles earlier and had never had any problem whatsoever with the 650. I finally got to speak to the General Manager who was very polite and found a service bulletin on the 650 that describes exactly what had happened to me and that a "fix" would be available in a couple of months.

What had happened was overheating (I assume from the high temperatures and fighting a very strong wind at 75 mph). The coolant reservoir has an overflow that squirts coolant upwards and results in coolant covering the inside of the windscreen and pretty much everywhere else too. They weren't much help other than to read the bulletin to me and email it to me. So, we waited a while at the rest stop and resumed our ride. Keeping a close eye on the temperature and watching for fluid on the windscreen.

Sure enough, another 25 miles up the road the same thing happened. I took the next exit and we took another extended rest break. We finally limped into Victorville where we got a room and discussed the issue.

We decided to do nothing until we got home and just keep an eye on the temperature. The next morning we left for home again in very high winds but much lower temperature. Fortunately, most of the wind was tail wind with the occassional surprise side gust. We made it home with only one stop due to high temperature but no fluid on the windscreen.

Here are some photos of the spooge all over the bike. What a mess. The pictures don't do it justice. 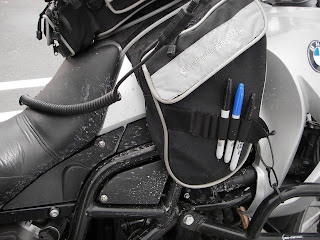 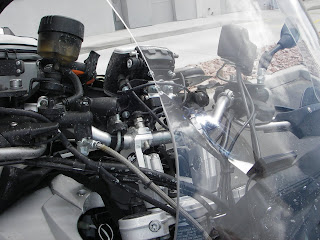 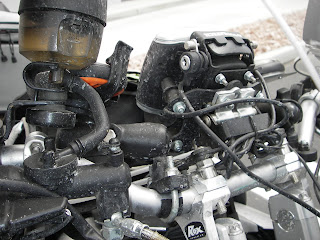 At home, Eric made some adjustments to the overflow reservoir and secured a hose to the overflow outlet to route any overflow down and away from the bike rather than up the windscreen. For now, this is our temporary fix. We'll see if the problem happens again. I've spoken with a number of F650GS owners who ride hard in hot climates and none of them have ever had this problem. Kind of coincidental that I just had it serviced and then a problems rears its head? I don't know. I do know I'm not happy about it at all.

I'm headed to Oklahoma tomorrow for a rally. I'm pretty sure the temperatures won't be anywhere near 100 but I might get some good wind. I'm perplexed by this so if any of you have had this issue please let me know what you did to fix it.
Oklahoma ride report sometime next week. Stay tuned. Oh, I promise I will post pictures of all the farkles and fuel cell soon as well.