Oh Boy!!! It's finally Friday and time to head out to White Stag 2013.  My very first rally was White Stag 2010 and that totally got me hooked.  I was not going to miss this one!   We had the bikes packed the night before and were ready to roll. 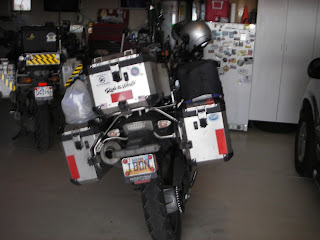 Oh no, waking up to rain, big rain, very wet.  Not looking nice.  I don't mind getting caught in the rain but really hate starting out anywhere in the rain.  Oh well...  It was a wet and cold start.  Our route was not very exciting... 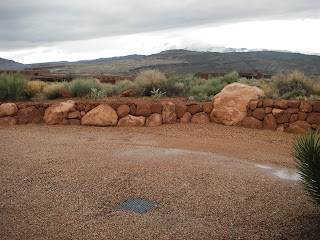 .Old Hiway 91 is a treat but then we hit I-15 for the slab to Las Vegas.  Just nothing but rain, wind and cold.  Darn :-)  Our ride took us from I-15 to I-215 West where we hooked up on Highway 95 which is a straight shot to Beatty, NV, our destination.  We had some very nasty squalls of weather on 95 and I had to slow down as I couldn't see very well.  Thank goodness it didn't last long!

My brand new Gaerne G-Midland Waterproof Boots proved they weren't so waterproof on the left boot.  Darn, guess I'll have to send them back to Italy.  I hate that!!

We finally arrived at the Stagecoach Motel in Beatty, NV and watched the riders show up.  It was tons of fun seeing all the folks coming into the parking lot.


One by one, two by two, three by three, peeps pulled into the parking lot! 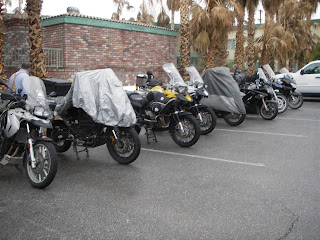 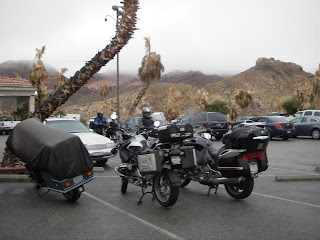 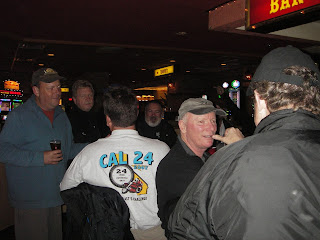 We started out the evening with a social hour in the bar.  Go figure, LD Riders having a social moment?
Hahaha, having a good time!  That's what White Stag is all about.  This year was a "Stagger" rather than a "Rally."  No problem, all riders were good with that! 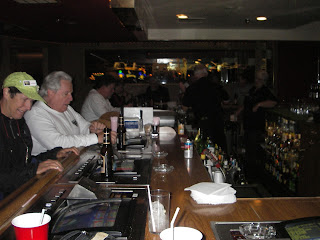 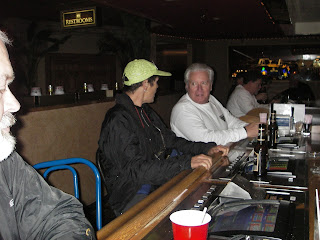 So after some fun times and  chatting at the bar, we all moved into the conference room for the "rider's meeting". 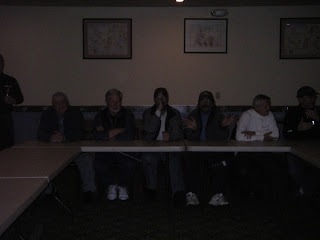 Some riders were having fun.... 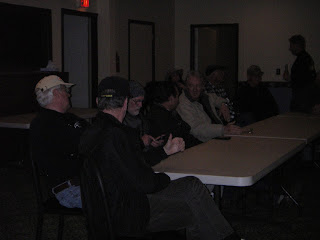 Some riders were discussing what it might be all about! 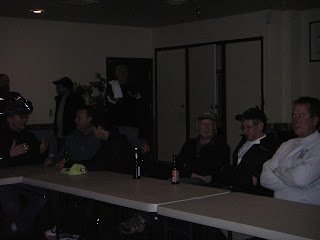 Some riders seemed to not care :-) And other were just having fun, fun fun!! 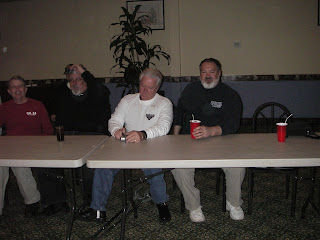 So, the rider's meeting was a jolly event in itself. We were told this was a stagger, just ride your ride and if you want to have more fun than riding Death Valley, well, go to Titus Canyon and don't forget your condom! 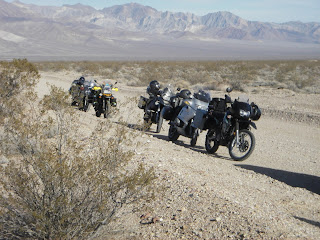 Bikes start arriving in Titus Canyon.  It was very windy which would make the condom shoot a challenge.

Riders waiting their turn to shoot. 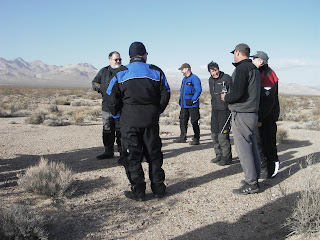 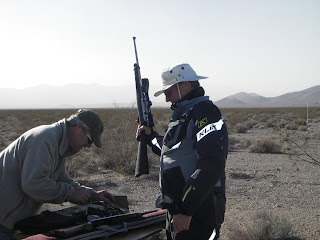 John Cheney was really quick with blowing up his target, getting it mounted, running back to the shooting stand and firing.  One shot John!

Tom Melchild starts the timer with unwrapping his condom. 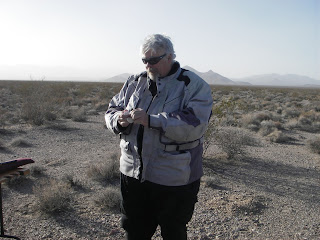 He was not the fastest!! 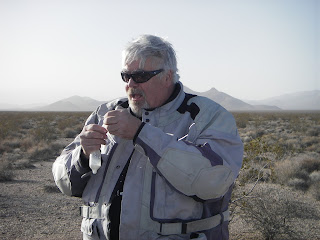 Eeewwww!  What's in that condom, Tom? 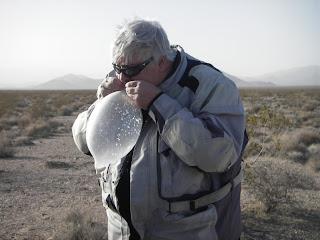 Unfortunately Tom's condom blew off the target stand and burst so he never got a chance to shoot. 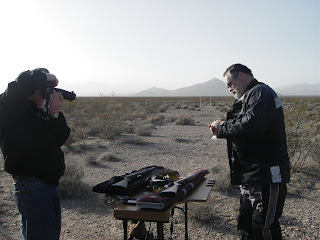 He blows up the super sized Trojan Maximum XL condom. 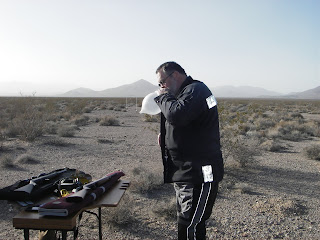 Gets it attached to the target stand, runs back to the table, picks up the rifle and BOOM!  One Shot Eric!! 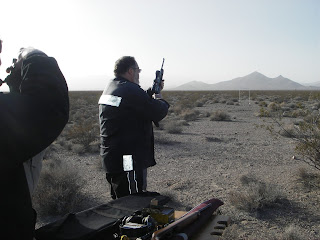 Pretty much everyone hit the target which was quite amazing considering the wind.  First time ever shooting, Alan Pratt hit the target with his second shot!  Way to go Alan.  He was all smiles and giggles. 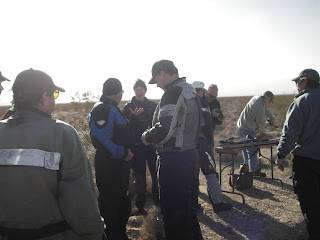 After all riders had shot their condoms, we cleaned up, packed up and back to the hotel for some socializing and the banquet. 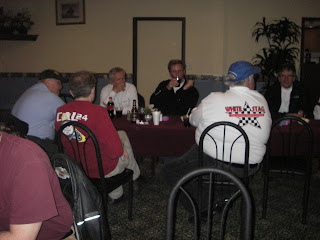 Michelle Almassy and Steve Lotsofsky were having fun! 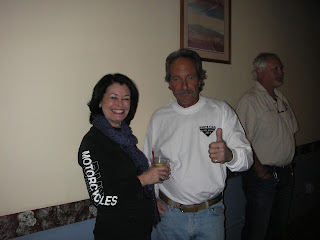 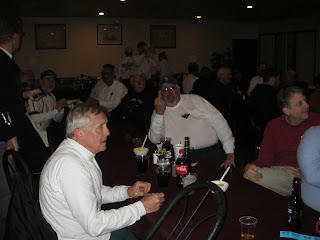 Andy Mackey and Chris Purney checking their door prize tickets.  Tom Almassy always does a fantastic job on door prizes.  There were lots of goodies including a riding jacket and two helmets.  My swag collection included a glue gun, teflon tape, long sleeve White Stag T-Shirt and a really cool metal bottle opener that has a 8mm and 10mm wrench on each end and WS24 laser cut into it.  Good stuff!! 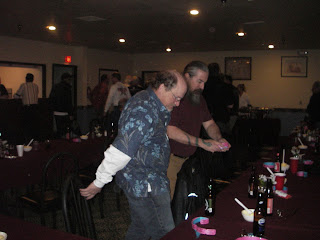 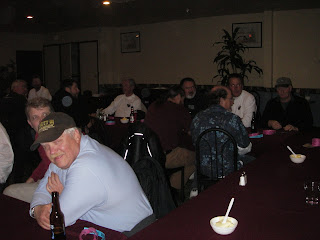 Dinner was catered by a local Beatty restaurant, KC's BBQ and consisted of green salad, garlic bread, lasagne, fruit and delicious home made cakes, carrot, coconut/strawberry, and chocolate.  It was outstanding.

After the banquet the party moved into the bar where we sat around telling stories.  I had such a wonderful time.  I had the opportunity to spend time with some riders that I didn't know well.  Just totally enjoyable! 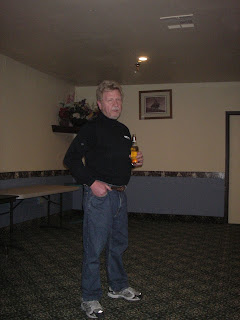 A great, big THANK YOU to Tom Almassy for putting this event together.  Tom promises that White Stag 2014 will be really special as it is the 25th anniversary of White Stag.  Be prepared for an old school type rally and don't forget your condom (extra large, non-lubricated).  Hope to see you there!

The next morning we got up and crossed the parking lot to get breakfast.  Gee, everyone was gone already!!  Oh well, we ate brekkie, packed up our bikes and headed home the same route we took getting there.  However, the ride home was pleasant, no rain, slight wind and comfortable temperature.

Our next adventure?  Peru.  Yes, Peru.  Leaving in two days from now.  We'll be renting bikes and ride from Cuzco to Machu Picchu.  Blog to follow upon our return :-)