October 24 - Up again at the crack of dawn, quick buffet breakfast and on the scooters.  Fueled up at the hotel parking lot and off we went – heading to downtown Cairo!  I am so impressed with the police escorts that we have had along the way.  All through Giza and Cairo, the police would be at every on ramp blocking the traffic so we could enter without too much chaos.  Fantastic!  Of course, everyone in Cairo was late to work this morning because of us!  What a sight we were, a long line of two wheelers, first the bikes, then the scooters all in stagger formation.  Wow!
We rode past the Giza Pyramids and then onto the Cairo Ring Road.  It was so awesome to be able to ride through the 3rd largest city in the world on scooters with no traffic to deal with.  Just wow!  Exiting Cairo we merged onto the Cairo Suez Road.  We had police escort the entire way, cars, trucks, jeeps and motor cops, even canine.

Our group had somehow improved overnight and pretty much maintained a good formation with no incident.  For the most part the roads were in fair to good condition but we did run into some stretches of road construction and fortunately no issues.  We rode single file through the construction zones.

As we rode along, the Suez canal was on our left and we saw tons of freighters and big ships.  Our route took us south with the Red Sea on our left.  On our right was dirt.  Yup, lots and lots and lots of dirt.  We stopped for our first fuel break and motored on again heading south. 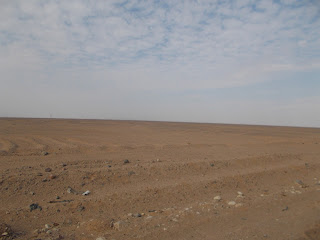 This desert is barren.  No vegetation of any kind.  Just lots and lots of rocks, dirt and sand! 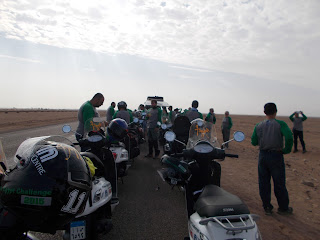 Typical fuel stop along side the highway. 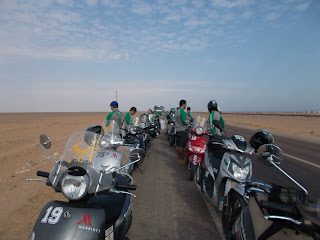 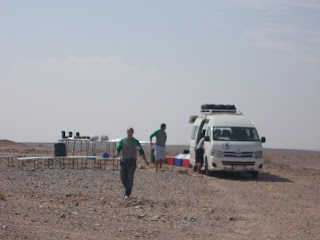 Setting up for lunch. 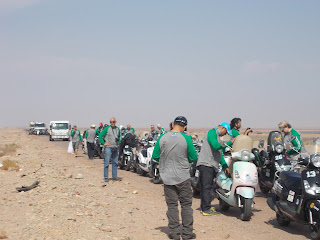 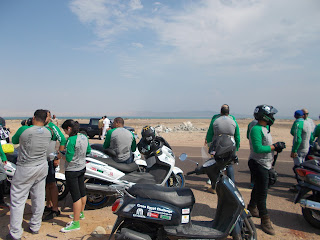 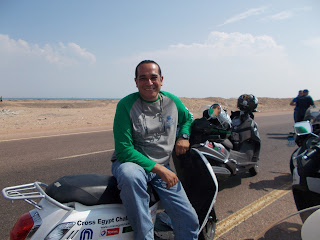 Taking a chill on the scooter! 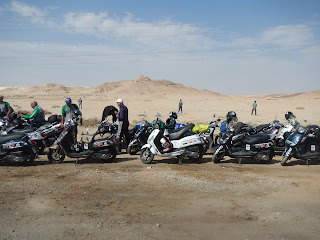 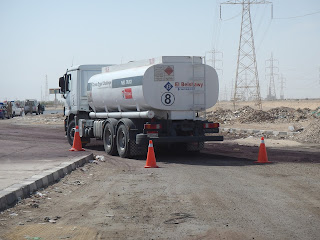 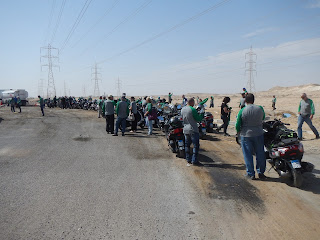 A long line of scooters. 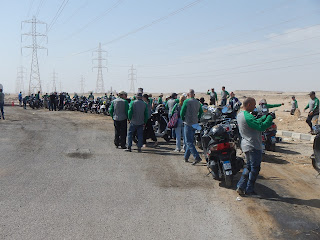 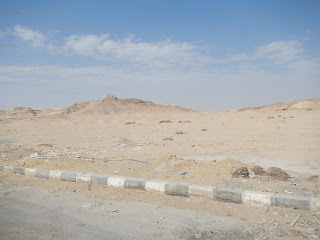 See that hill?  That was the ladies loo today :-) 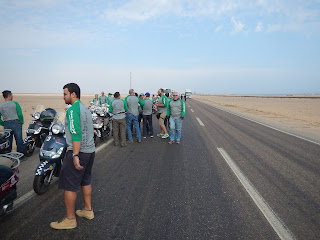 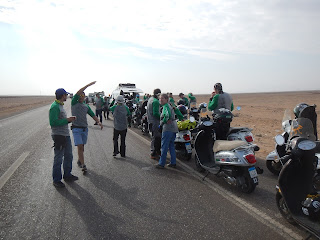 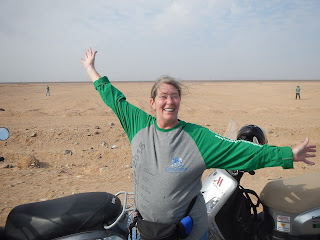 See those guys out there in the desert?  That was their loo! 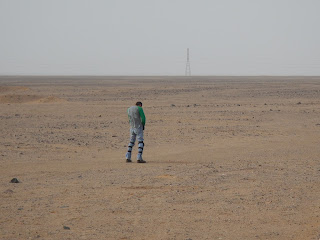 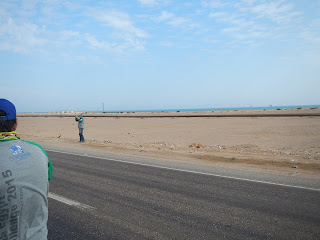 Just a peek of the Red Sea on the horizon. 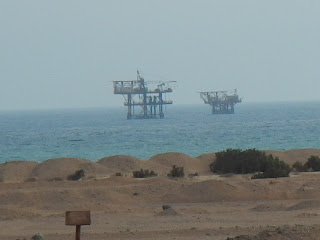 Oil rigs in the Red Sea.

Our lunch break was at a parking area alongside the highway.  I really had to pee by now.  I didn’t pee at the first fuel stop because there wasn’t any place to go.  Not a bush or hill in sight.  Of course, all the men just turned their backs to the highway and let it go.  I was okay but as it got closer to lunch the more I had to pee.  I mean, really, really, had to pee.  At the parking area there were dirt hills here and there and most of the women made a beeline to the hills to take care of business.  We had been promised a port-a-potty for the ladies but that never materialized until today.  Of course, most of us had already taken care of business.  However, after a struggle of about 30 minutes with the port-a-potty tent, they finally got it set up.  Even so, the first woman who used it had to pick up the actual potty and place it inside the tent!!!

Later that night, one of the organizers mentioned the port-a-potty was full even though some ladies used the hills.  Eric responded that it was full after one woman because we all had to wait so long to go, hahahaha.  (Yes, I ALWAYS carry toilet paper).

Tuna and pita with juice and water and fig cookies for lunch.  Following our lunch break, we headed south again.  As the road narrowed into two lanes in each direction where we went into single file along the right shoulder so people could pass us down the center of the two lanes.  We were warned to beware of the curves but honestly, we laughed.  They would have been a blast on a motorcycle at maybe 65 mph.  But on a scooter at 35 mph they weren’t so difficult, hahahahaha.

It was hot, but as long as we were moving it was pleasant.  The scenery of the Red Sea was spectacular.  The scenery to the right – not so much! About the time my bottom was telling me it was time to quit, we pulled into our hotel for the night, the Cancun Resort on the Red Sea.  A bit dated, but quite nice.  Beautiful views from our room.  I’m not sure when a shower and shampoo ever felt soooooo good.  It’s been hot and humid and stop and go riding creates some nasty sweating.  I think a clothes wash will be heaven! 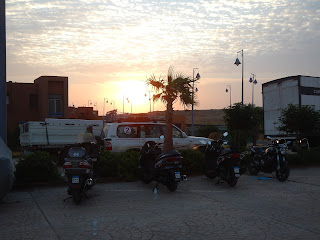 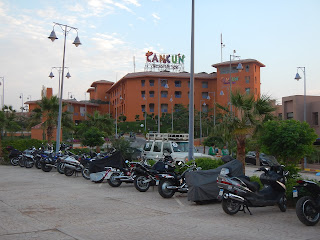 We finished the evening with dinner and then an ice breaker meeting.  I really didn’t want to do the meeting since I was so tired.  We have had activities every evening after riding and dinner and man, it was catching up to me.  However, we stayed for the ice breaker and I’m so glad we did.  It was good silly fun.  One of the organizers took all of our name badges and then redistributed them about the room.  We then had to find the person whose tag we got and introduce ourselves and find out something about them.  After we did that for a few minutes we then sat down and took turns telling the group about the person we met.  We had to pretend we were that person.  It was so much fun.  I met Otto from Canada.  When it was my turn, I stood up and pretended to be Otto and told the group that I loved to dance.  I wanted to dance some ballroom, foxtrot and west coast swing!  Hahahaha, it was good silly fun.  Many of the peeps were very good at mimicking and that made for some hilarity!

Then one or two peeps from each country represented got up and without saying anything, had to pantomime things that would describe their country.  Hahahaha, I was teamed up with Medium Mikey and we pantomimed baseball, football, cowboys & Indians and Harleys.  The ice breaker meeting was a great way to really meet the other peeps in the group so I’m very happy be stayed for it.

Then, it was off to bed and sound asleep.  Our 4:45 am wake up call was going to be coming soon!

October 25 – Yup, 4:45 am came really, really, really early.  We had a quick brekkie, got on the scooters, fueled up and hit the road.  By now, the group was getting the routine down quite well and what started as chaos was now pretty organized and quick.

We started out in single file because we were still on the two lane road.   After a while the road opened up and again we were on two lanes in each direction with a very large median in between so we rode double stagger.  I was impressed with how well my group (#2) was doing.  Everyone was riding decently, keeping in their own position and no wandering around.  That made me more relaxed.  Again, the scenery was the Red Sea on our left and dirt, dirt, dirt on our right.  We did pass some military installation that had some interesting weapons and vehicles on display along the road but we didn’t stop.  Honestly, riding along in stagger formation with a bunch of folks you don’t really know doesn’t lend itself to sightseeing.  Mostly I was paying attention to the front.  Thank goodness Eric was always behind me so I didn’t have to worry about the rear!

We made a fuel stop that was fairly quick (no place for ladies to pee AGAIN) and then back on the scooters still going south.  By the time my bottom needed some relief and I really need to pee again, we stopped for lunch.  Yummy, today’s lunch was some beans with who knows what but it was delish!  Of course it was served with pita bread and our sweet treat was a croissant with chocolate filling with juice and water.  No covers were set up today and no port-a-potty either.  Hmmmmmm…….. this is beginning to be a theme.  No peeing for the ladies!

After lunch, we saddled up and headed to Hurghada.  Suddenly, I felt some rain drops.  Then more rain drops.  Then more really, really BIG rain drops.  No, no, no!  No rain in the Egypt East Desert!  Nothing grows out here, how could it possibly be raining?  Ah, it didn’t last long.  So, okay, I figured I’d dry out as we rode along.  I was wearing my riding gear – jeans and a t-shirt.  We stayed dry for only a few miles.  It cleared up as we got to the gates for Hurghada and picked up another police escort who led us into town and our hotel, the Marriott Red Sea Resort.  As we headed into town, the skies opened up with thunder and lightning and the rain poured on us.  I was soaked.  I mean, I was totally wet down to my socks and panties.  Then the water poured into my boots and filled up.  It was big, hard drops – almost hail and it hurt like hail!  I tried ducking down into the tiny windscreen but that only allowed the water to run down my back into my jeans.  I just love the feeling of water trickling down my……you know….

When we entered the city proper, the rain let up again.  This is a fairly large, tourist, vacation city, so we encountered a bit of traffic.  But, our escort was marvelous and stopped traffic so we could manage the round-a-bouts and streets without issue.  It was wonderful to pull into the Marriott lot, park the scooter for the day and get a room.  I was drenched and only wanted to locate my suitcase and room and change into some dry clothes.  The hotel staff was trying so hard to be gracious and wanted us to go into a reception room and have a drink and relax for a bit.  However, all of us who had been riding in the rain only wanted a room and dry clothes!  Of course, the organizers, van passengers and staff were dry because they were in the support vehicles so I hope then enjoyed the hospitality! 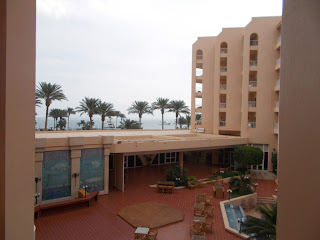 Views from our delightful room at the Hurghada Marriott. 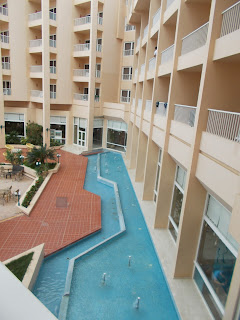 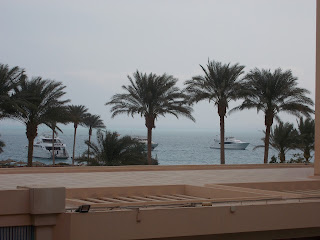 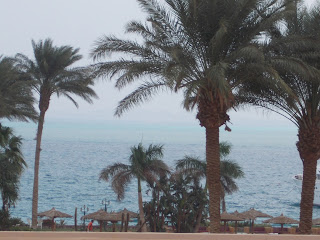 That pretty much brings us current on what’s been going on.  Internet services is extremely poor and we’ve been very busy with riding and then activities and then sleep.  It’s been a go, go, go event so far.  Frankly, while I’m loving the scootering and all, I’m looking forward to our few days in Luxor so we can re-charge a bit.

I know I’ve forgotten to touch on a bunch of things and maybe I’ll remember and post them later.  Also, I’ll try to pull some photos off the Internet from the Cross Egypt Challenge page.  Until then, you’ll just have to deal with my lousy point and shoot photos.

Oh, another thing…I’ll have to check the page but I’m not sure if the Spot tracker is working here or not.  It did die today and of course I didn’t bring any lithium batteries and can’t find any here.  I was paranoid of bringing any more batteries because of all the silly US TSA laws and rules about batteries.  I already had spares for my cameras, toothbrush, etc.  So I didn’t bring any lithiums.  My bad!

Thanks for following along.  More when we get to Luxor and I have time and internet!