Oh boy, I haven't been home a week and I'm off on another adventure!!  Team Lyle WFO Alamo 2016 was going on this weekend in Alamo, Nevada. Check out the details here - WFO Alamo.   Originally, Eric and I planned on just showing up early Sunday and meet the group for lunch and then scoot home since it is only about 175 miles from home.  However, that didn't happen!

Saturday was so beautiful and I really wanted to ride so I suggested we go to Alamo and meet up with everyone on Saturday instead of Sunday.  I called the motel and surprise, they had ONE room left so I scooped it up.  Eric quickly got going on an oil change for my bike since it was slightly overdue due to the previous trip.  New oil in the bike, chain cleaned and lubed, overnight bag packed, flask filled and then we were out the door in minutes.

Looked like our arrival would be around 6 pm Pacific Daylight Time (we gained an hour from our Mountain Time).  We took two lane back roads to Alamo and had a delightful ride although it got quite windy at times.  A quick stop at Enterprise, UT to top off our fuel tanks and then just motored on to Alamo.  Little to no traffic, sunshine, wind and a bit chilly at times but a fantastic ride!  When the big wind gusts hit me, I thought about the folks riding the rally and how that must be mucking up their mileage and maybe even speed.  In rural Nevada (which is most of Nevada) gas stations are few and far between and you had better know where they are and fuel up even if you don't really need to!

As predicted, we arrived at the Alamo motel right around 6 pm and surprised the few folks that were hanging out!  I was surprised to see Teri (Nevada Wolf) because she was supposed to be riding the rally.  Well, I quickly found out that she had thrown the chain on her new to her Honda CB500X which ended her rally.  Fortunately, no damage, no crash and help was only a phone call away.

We spent several hours on the motel patio shooting the breeze or bull with the support staff and a few riders who for one reason or another decided to not finish the rally.  Here are some pics of Long Distance Riders hanging out!  Something we do well ;-) 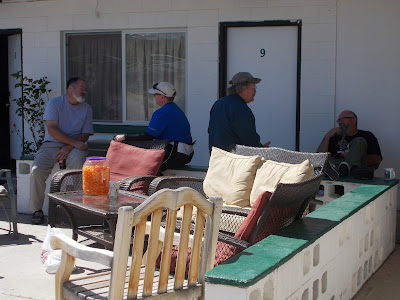 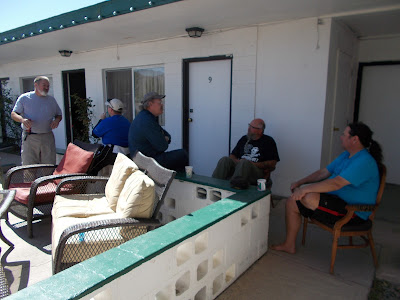 Hey!  There's Mario Winkleman.  Good fun, I had just spent time with Mario at the Spring Shoot 'Em Up.  Those LD Riders get around ;-) 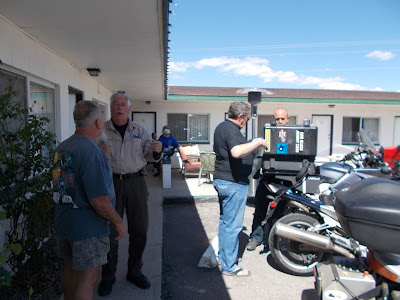 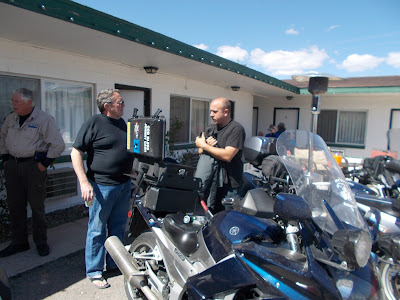 Teri's new to her Honda.  It's a very sweet machine! 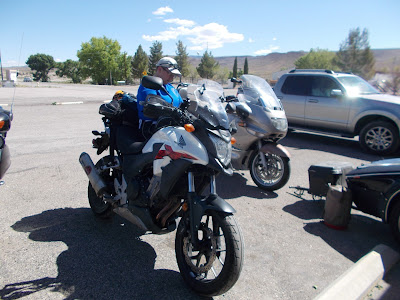 And, she's quite proud of it and looking forward to many new adventures. 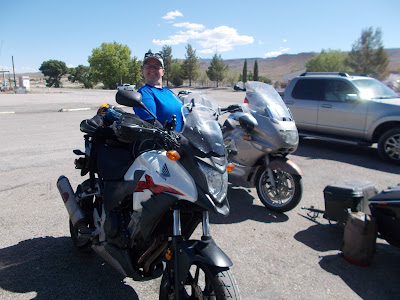 Love this picture of Nevada Wolf! 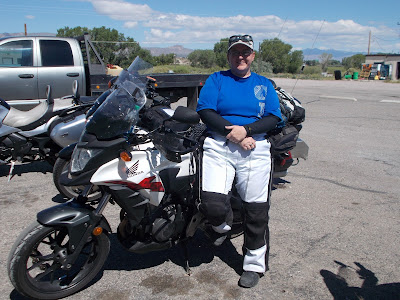 Of course, I had to take a picture of Eric's and my bikes! 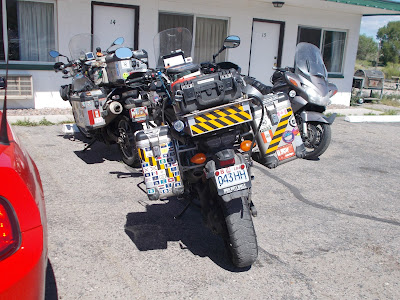 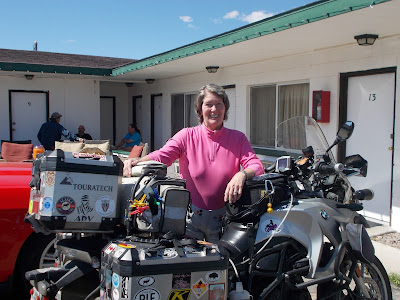 Selfie with Teri.  Thanks for the bunny ears, Teri!  I must stop wrinkling my nose when I do the selfies!! 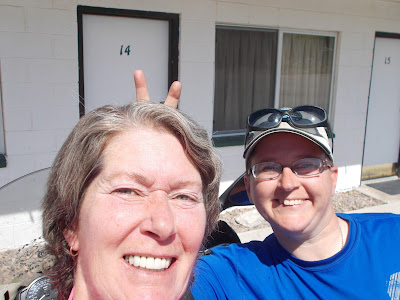 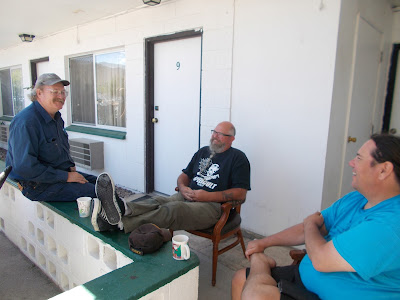 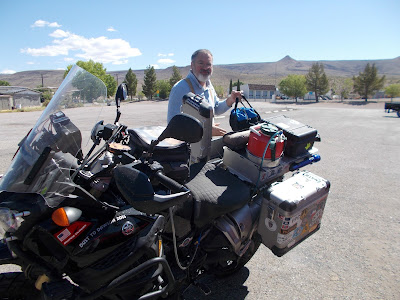 Those of us that weren't riding the rally all went to dinner at the Windmill Restaurant.  We had a delightful time with conversation and good food.  Back to the motel, cocktails and/or beers were in order with more stories to be told.

The next morning, the rally riders had all safely checked in and hit the sack for a few hours sleep before the lunchtime banquet.

Back to the Windmill for the banquet, Eric and I got there early so we could have brekkie rather than lunch.  We spied these retro cafe bikes parked outside.  The riders were two guys and a girl all from Nevada just having a weekend rideabout. 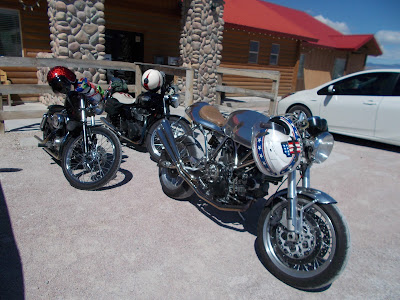 Paul and Kip were there even before we were.  We enjoyed a nice breakfast as other WFO Alamo folks began to gather. 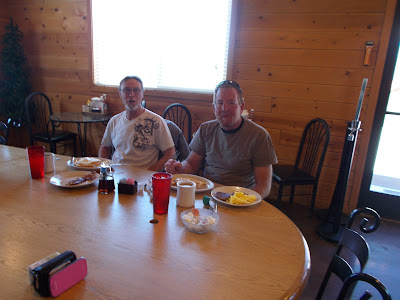 The private room reserved for WFO Alamo began to fill up. 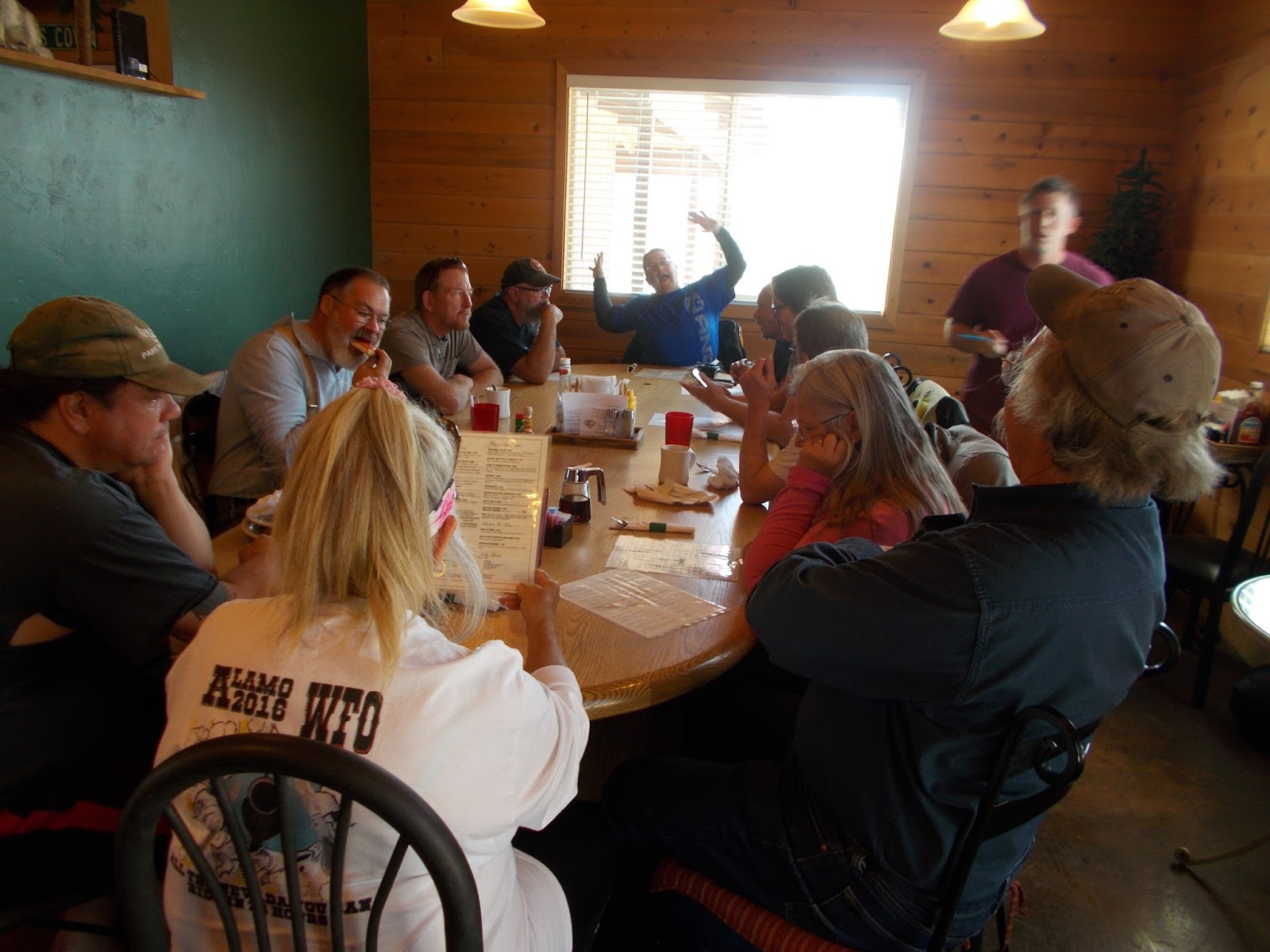 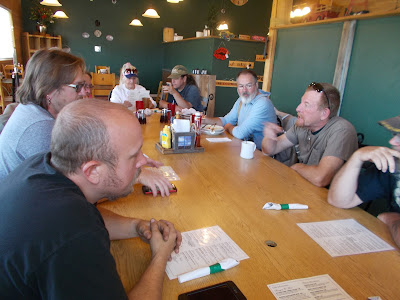 And, special treat, Paul Peloquin was there.  He completed a Bun Burner Gold during WFO Alamo.  Paul does a charity ride every year, (Dutch Treat), using Dutch Brothers coffee locations as bonus stops during a long distance ride.  This year Paul will be riding 2,948 miles to visit 19 new Dutch Brothers store locations in six states!  His charity is Shelly's House which provides safe, drug-free housing for women offenders at risk of homelessness in Marion County, Oregon. 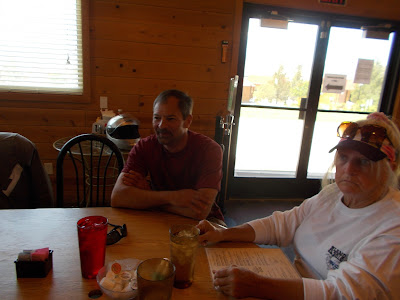 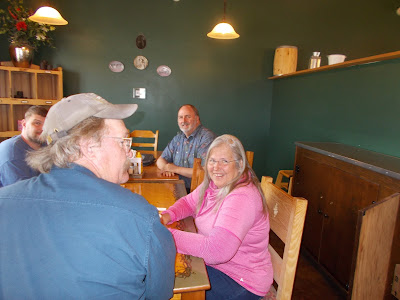 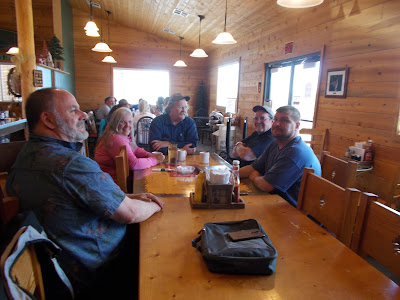 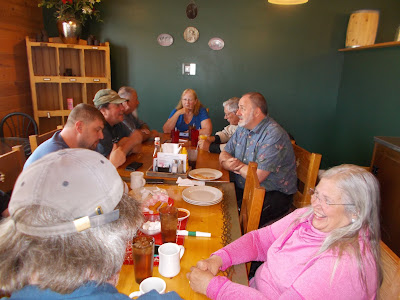 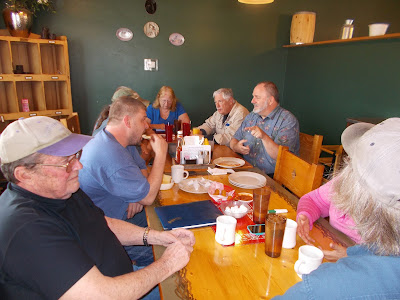 Doug was very proud, and rightly so, that in the five years he has put on Team Lyle Alamo events, there have been no accidents, major animal strikes or injuries.  A safety record to be extremely proud of.  Of course, we don't count bunnies, snakes, gophers, small birds, etc.!  Riders who have not been able to complete the rally typically had mechanical issues or personal reasons for not finishing. 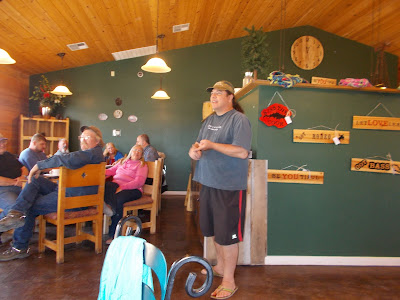 Pat Ford, shown here in the black tee shirt, was recognized for attending AND completing all FIVE of the Team Lyle Alamo events!  Way to go Pat!!! 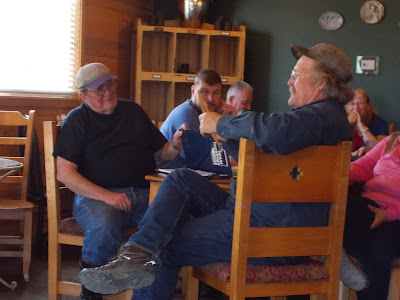 After awards, we all gathered outside for a group photo taken by Paul Peloquin.  Team Lyle WFO Alamo raised a whopping $1,000 for Shelly's House!  Way to go LD Riders!!!!! 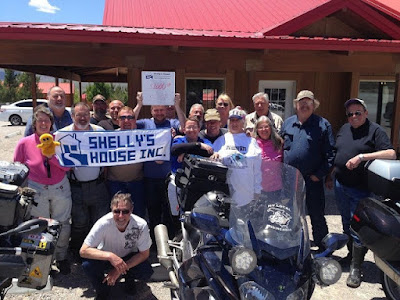 Soon after the group photo, folks began dispersing.  Many were staying on for the Sunday night bbq and others had to leave.  We were among the group that had to say farewell. 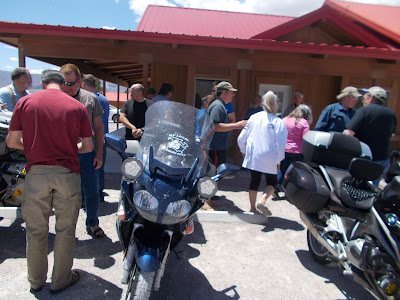 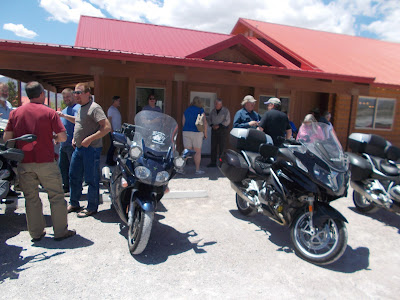 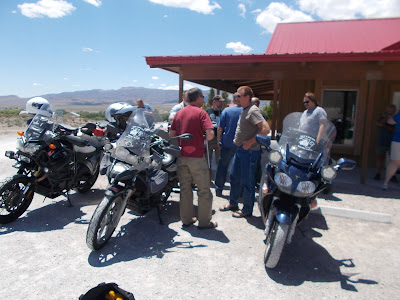 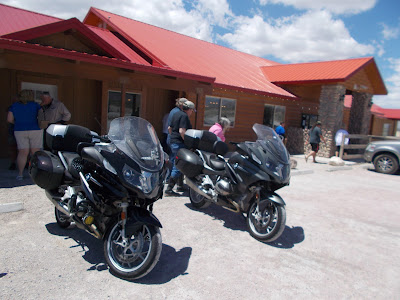 One final photo!  Doug Barrett with his girlfriend Mary.  Mary was responsible for the Tee Shirt and coffee cup designs and did a bang up job!  Thanks Doug, Mary, Brian and all the support staff and riders for such a wonderful, fun and safe event. 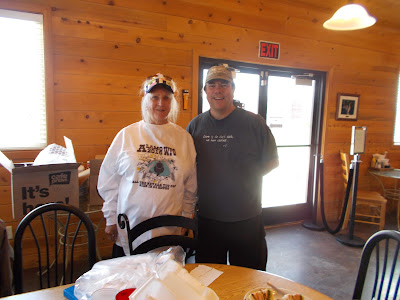 We left Alamo around 2 pm or so and stopped in the next little town of Ash Springs to fill up our gas tanks before heading into the desolate, yet beautiful, rural Nevada landscape.  Another bright, sunny day with very little wind.  We enjoyed having the highway to ourselves had a great time leaning into the big sweepers and tight twisties before hitting a long, straight stretch.

We slowed down appropriately as we came to the town limits of Caliente, NV.  And.............as we passed the Shell station I spied two riders on BMW GS's with all the gear.  They waved, I waved and then I realized who it was and vigorously waved until we were out of sight.  Kelly and Jay Van Allen were having their own little rideabout and we just happen to cross paths.  They are from Washington and are taking some time getting to Las Vegas for the Big Money Rally banquet coming up this next weekend.  Small world!  That put a big smile on my face.  Kelly recognized me and Eric as well and put a post on Facebook.  Good fun :-)

So that's a wrap on this blog.  We rode a whopping 350 or so miles and had good food, good conversation and some of the best company anyone could ever find!

Although we don't have any plans for a Memorial Day Weekend ride anywhere in particular, you will want to check back as we are a Bonus location for the Big Money Rally that is winding up this coming weekend.  The Bonus is only open for one hour on Friday, at Veyo Pies in Veyo, UT.  I believe the bonus requires five elements within that small one hour window.  So you BMR riders be prompt!

Cheers to all and thanks for coming along!
Cletha