Several weeks ago I applied for a position on the Ducati Globetrotter 90 team.  Ducati intends to introduce the new Multistrada 1200 Enduro by taking it around the world and stopping at various venues.  They are picking an initial 14 people who will go to Italy and attend "Boot Camp" and the final seven riders will be selected to take the Enduro around the world.  Ducati Globetrotter 90

You can only imagine my surprise when I was notified that I made the first cut!  Wow!!!!!  They were looking for people who ride and blog.  I guess I met both criteria ;-)  On the down side, if selected as one of the final 14, you had to make your own way to Florence, Italy to attend the boot camp.  So, that would be a BIG expense for anyone traveling outside of Europe.  Oh well, after discussing it, Eric and I agreed that IF I was lucky enough to make the cut, we'd find the money somewhere to get me to Italy.

Whoa, some exciting things to think about.  The new Multistrada 1200 Enduro is a BIG, MEAN MACHINE.  Multistrada Enduro  Pondering the costs and excitement I thought it might be prudent to actually go meet this machine in person and take a test ride.  A quick Google search indicated the closest dealer to us was up in Sandy, UT, about 300 miles to the north at Harrison Eurosports.  A few emails back and forth to the dealer and we were set to test ride on Saturday, June 4th.

Late Friday afternoon, Eric and I left home and headed north.  It was a paltry 106 degrees when we left and it really didn't cool down a whole lot as we rode north.  Fortunately, we had planned on staying the night at the Best Western in Nephi, UT which is only about 200 miles from home and about 60 miles or so from the dealer.

I stayed at the Nephi, UT Best Western on my return from Bonner's Ferry and noted in my blog that they have done significant upgrading.  We had a delightful King room with fridge and microwave that was clean, tidy and just right! 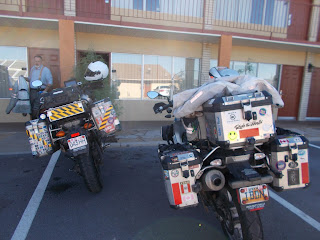 The view across the parking lot was a field of just mowed hay and it smelled delightful! 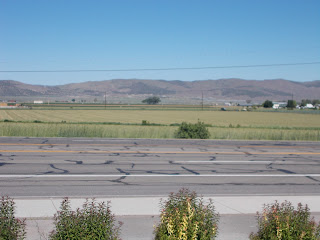 At one entrance was a gigantic tree that just called out to be climbed! 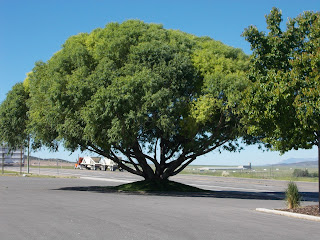 We had a good night's sleep, enjoyed the motel brekkie that included sausage, waffles, scrambled eggs, biscuits and gravy among other usual fare.  We weren't in any hurry and finally made our way out to the bikes mid-morning. 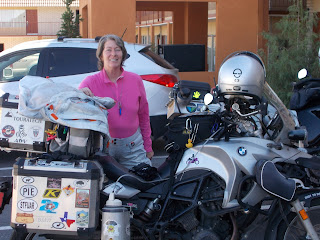 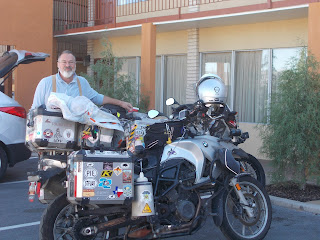 We simply hopped back on I-15 North and motored along.  We made one quick break and enjoyed the picture perfect day! 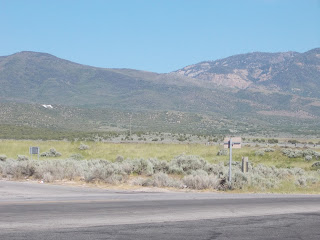 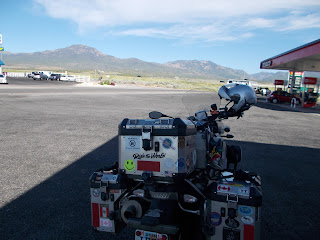 It was warm, but nowhere near the previous day.  We had filled our hydration jugs with ice that morning so we were set to go!

Traffic was fairly light since it was a Saturday morning.  We arrived at our designated exit around 11:00 am and quickly pulled into Harrison Eurosports parking lot.  OH MY HECK!!!!  Eye candy everywhere!  They have the Trifecta, Ducati, Triumph and BMW.  And....they had lots of each brand!

Well, heck, I somehow lost a bunch of pictures showing all the bikes.  Or maybe....I was just focused on Ducati? 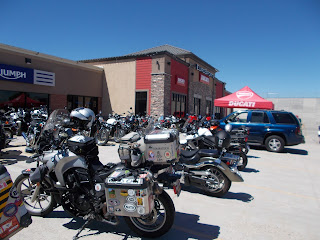 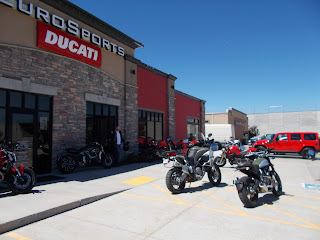 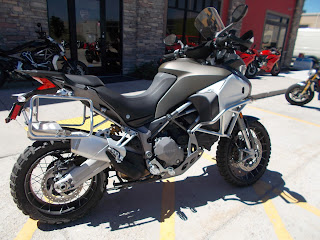 We completed all the appropriate paperwork to take test rides.  They set up the Enduro with a low seat for me and they set up another Standard Multistrada so we could test ride together.  We were ready to roll.

Except.....My feet were a LONG way from the ground!  I mean, a Loooonnnngggg way, even with the low seat and the bike in Urban mode (which is the lowest to the ground mode).  I couldn't even tiptoe.  And, it was heavy :-(  There was no way to lower it any further other than putting in a different spring and that wasn't going to happen. 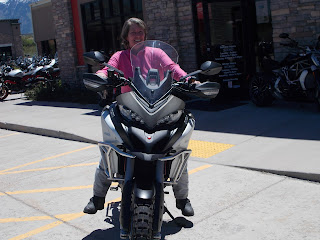 Of course, once I get in motion, I could most certainly ride the bike.  However, takeoffs and landings were definitely going to be a big issue for me! 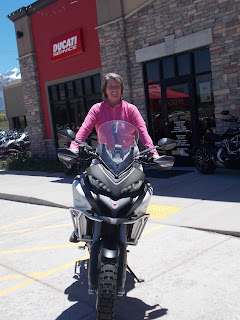 So, my Ducati bubble was burst :-(  Boohoo! There was no way I was going to try and take that monster out of the parking lot.  All I could envision was dropping it and having to pay lots of $$$ for the damage.  Darn it!  Oh well.  On the other hand, Eric was most eager to take that beast out on a test ride!  He had the regular seat installed on the Enduro, made several parking lot figure eights before heading out of the parking lot on a test ride.  Here is his review.

After some Ducati emails and other poking of the internet, I became curious just where the nearest
Ducati dealer was to me.  I knew nothing existed in St George, UT, so went to the Ducati North
America web site,http://www.ducatiusa.com/index.do , to do a dealer search.   Come to find out that
the nearest dealer was Harrison Eurosports, approximately 300 miles away in Sandy, UT.
That's a slog North on I-15, for those unfamiliar with Utah cities.


So, obviously, Eric had a fantastic time on the Multistrada 1200 Enduro.  He raved about it the entire day and all the way home!  However, it simply wasn't going to work for me, period.  So, while Eric was out and about testing the Enduro, I had plenty of time to go shopping.  Oh my!!!  Again, it was Harrison Eurosports and they had Ducati, Triumph and BMW.

An honest admission here folks, I've lusted after that dang BMW R1200GS Adventure ever since I bought my little F650GS in 2011.  I want that bike!  The sales guys were more than willing to help me find a set up that would work for me.  As a matter of fact, they went out of their way to help me out!  First, I sat on a standard R1200GS with a low seat.  Perfect, fit was awesome but it wasn't the Adventure over which I lusted.

Hey, wait a minute!  The shop had just this minute uncrated an R1200GS Adventure Low Suspension and I could check it out.  Then, they put on the low seat.  Oh, STOP MY BEATING HEART!!!!

It was like putting on a well fitting glove.  I could easily get my feet firmly on the ground and just as easily pick up the bike from the side stand.  Oh, oh, oh, oh, oh, (yeah, almost orgasmic here!).  Good thing they didn't have one I could ride away.  The bike I sat on was already sold.

Eric returned from his test ride, all big smiles and happiness.  And, I was thrilled to have found a perfect fit bike.  Where do we go from here?  Well, that is the question, isn't it?  If you read Eric's review above, we probably won't be purchasing a Ducati Multistrada 1200 Enduro for the stated reasons.  However, I probably WILL be purchasing an R1200GS Adventure LL (Low suspension, Low seat) very soon.

Wow, what a day at Harrison Eurosports!  We left about 1:30 and headed south on I-15 with the intent of riding the Mt. Nebo road.  It was glorious.  The weather was perfect, the road was smooth and hardly any traffic.  We stopped at several pull outs and scenic view spots.  Here are a few pictures of that glorious afternoon ride in central Utah.

A view of Utah Lake from the Mt. Nebo loop road. 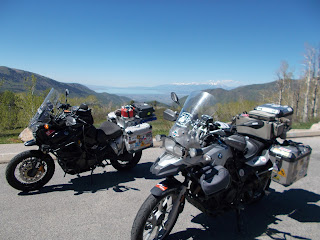 What?  Looks like we went to the Alps :-)  Nope, just some of the beauty in Utah! 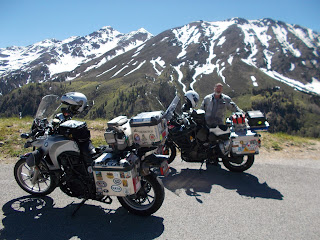 Another scenic stop on the Mt. Nebo loop. 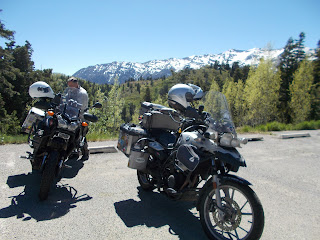 A map to show where we were. 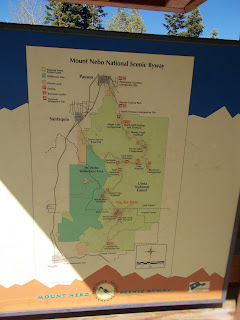 A little blurb about  Devil's Kitchen, what a fantastic little find in the middle of nowhere! 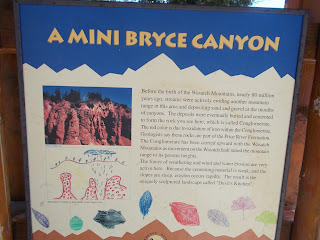 A few pics of Devil's Kitchen. 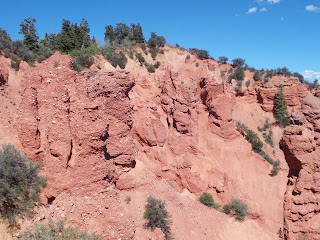 Such beautiful wildflowers!  We had this space all to ourselves - very special! 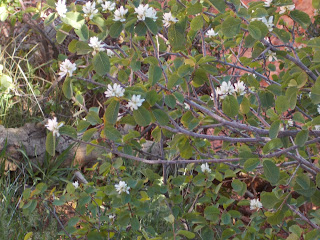 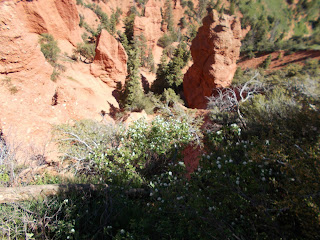 Another scenic view stop on the way down. 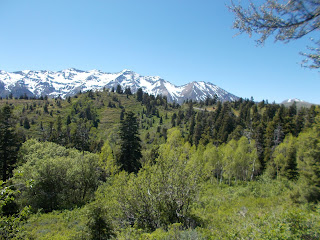 After exiting the Mt. Nebo loop road, we ended up in Nephi, UT, where we spent the night before.  We headed off on UT highway 28 to Salina, UT, our destination for the evening.  We stayed at the Super 8 which is really a nice little property.

The next morning, Sunday, we headed home.  Neither of us wanted to slog down the interstate so we chose UT Highway 89 to UT Highway 14 across Cedar Mountain.  The day was clear and hot until we got to the mountain when the temperatures dropped to a pleasant low 70's.  We stopped on Highway 89 at the Big Rock Candy Mountain Cafe - don't bother - it was mediocre at best.  However, about a 1/2 mile south on the same highway was a decent looking cafe with lots of bikes parked in front.  Probably a better choice. 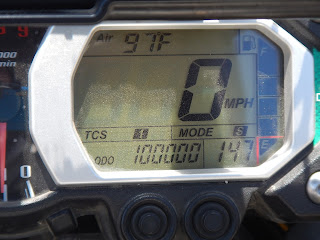 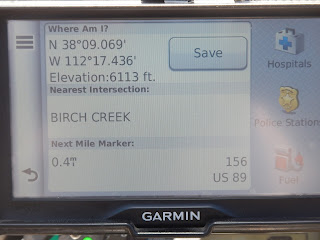 We were only about 1/2 mile from Butch Cassidy's boyhood home when the event happened.  So, of course, we had to stop and take pictures! 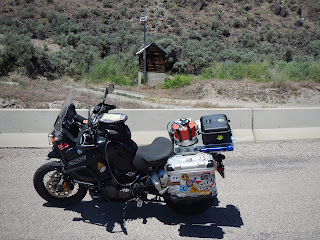 The closer we got to home, the hotter the temperatures.  I saw 108 degrees before we got home.  It was HOT.  Fortunately we had our LD Comfort garments on under our gear and were smart enough to wet down in Cedar City where we had taken a small break.  That kept us comfortable until we got home.

It was a great weekend and well worth the trip North.  I found out that I really couldn't ride the Ducati Multistrada 1200 Enduro and it rather shattered my dreams of an awesome Ducati Globetrotter 90 adventure.  However, I also found the bike that fit me so perfect I must buy it!  Yes, you'll eventually see me on a new BMW R1200GS Adventure with the lowered suspension and lowered seat.  I'm looking forward to kitting out a new bike.

Sure, I'll miss the little F650GS, she has been a trooper for me taking me over 100,000 miles of smiles.  But, I'm ready for a new, bigger, stronger, more adventurous bike.  Stay tuned for updates on this!

Although I was short listed, I didn't get selected for the final 14 for the Ducati Globetrotter 90 team.  However, a FB friend, Jess, did get picked.  I wish her the best luck ever.  She is an awesome rider and deserves this honor.  I'll be watching you, Jess!

So, that's it for today folks!  Thanks for following along on my adventures.  Who knows what might happen next :-)