I'd only been home two days and the adventure lust hit me again.  I just can't get enough of that Beastie Bike.  I knew some peeps from the Facebook group Women Adventure Riders were meeting up in Torrey, UT and I thought, heck, that's just a hop, skip and a jump away.  So, I packed up the bike with my camping gear and just after noon on Thursday I headed out.

I did make a reservation at the Thousand Lakes Camp Ground in Torrey, the same place Eric and I had our shake-down camping trip. I went north on I-15 from home to Cedar City where I headed east on UT14 and then US89 to US12.  US Highway 12 is one of America's Top Scenic Highways and it's right in my backyard.  US Highway 89 is another Scenic Highway and a delight. Always a lovely ride, I love going through Red Canyon on US12.  My ride was uneventful but for the spits of rain and it was rather chilly.  By the time I hit Boulder, UT it was cold and the sky was threatening.  I was hoping I could make it over the mountain before that nastiness hit!

Lucky me, only some sprinkles.  I rode directly to the camp ground and decided it might be wise to get a camp cabin rather than put up my tent considering the temperature and the stormy sky.  Turned out to be a wise move :-)

About an hour after I arrived, Jude and Andreas from WAR pulled in.  We'd only met on Facebook so it was fantastic to meet them in person.  Jude is the founder of the Facebook WAR page.  We had a quick visit as they were meeting some other peeps for dinner shortly.  I declined because I had already put on my comfy clothes and wasn't about to put all the gear back on.  I made a little dinner on the picnic table using our camp stove.  All was good with the world :-)

I slept well and was ready to rock and roll the next morning where I met the WAR group for brekkie.  I spotted the hooligans as soon as I entered the restaurant.  Really, it was easy, they were the only people dressed for motorcycle riding.  I joined the group of 7 making us a total of 8.  It felt like we had all been long time friends!  Wonderful conversation, light hearted joking and the glue of motorcycling makes a good group.

The plan was to take UT24 out of Torrey through Capitol Reef National Park and on to Moab.  Yeah, sounds horrible, huh?  hahahahah  The sky was blue and clear and the temperature near perfect, not hot but not cold - Goldilocks weather - just right!  I took off as everyone else was still gassing up and made a quick stop at the park entrance. 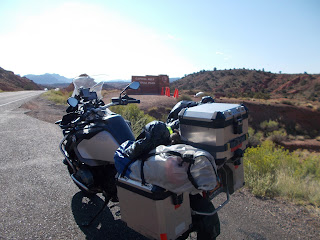 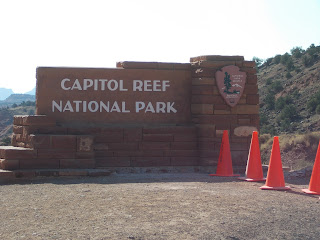 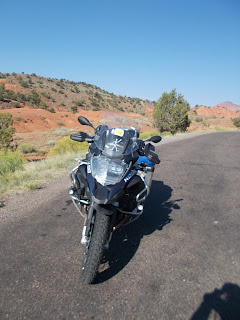 The group caught up to me quickly and we rode on down the road a bit.  We stopped at The Fluted Wall for a very special memorial.  Victoria, who had come all the way from Connecticut, Cookie from Colorado and Colleen from New Mexico all shared a friend who had lost her battle with cancer.  Her wish was to have her ashes spread at Capitol Reef.  These ladies were here to be sure that happened. 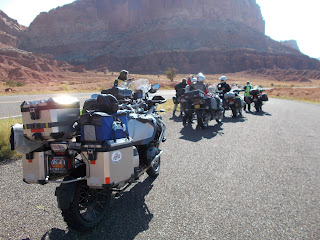 Here we are getting parked and sorted. 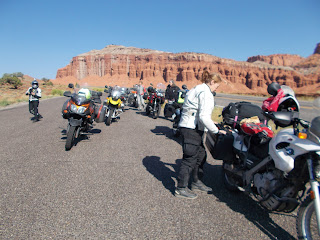 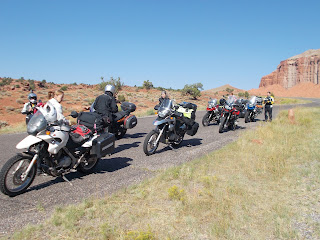 This is Jude, the Women Adventure Rider Facebook group founder! 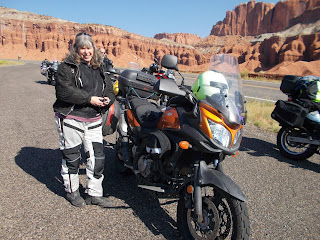 Here is where we stopped for the memorial. 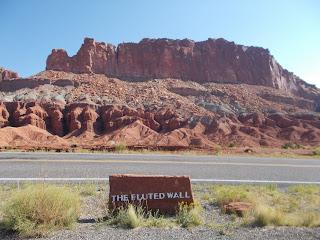 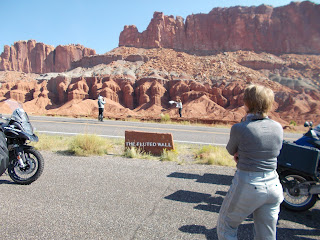 You can see the ashes floating to their final resting place. 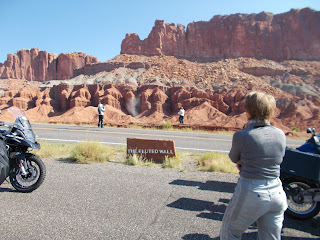 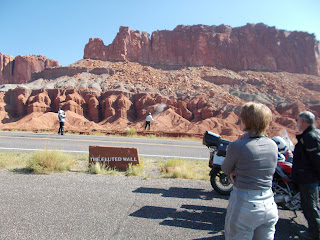 Mark played appropriate flute music as the ashes were scattered adding to the specialness of this woman, her friends and her memorial.  It was truly an awesome, solemn, beautiful moment and I am grateful that I could participate. 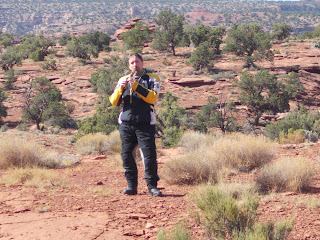 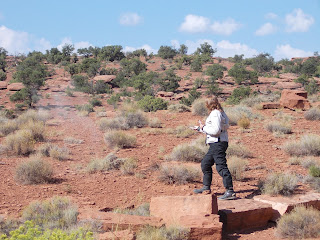 We then rode a bit further down the road to the Capitol Reef Visitor Center.  After touring through the center and making minor purchases, we were off again. 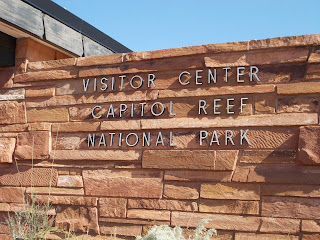 And here is the WAR crew! 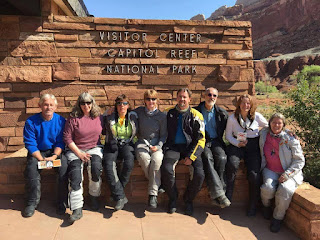 We stopped at Hanksville, UT and I admired the dinosaur art!  Two of our group left us a Hanksville as they had other plans.  The rest of us were headed to Moab. 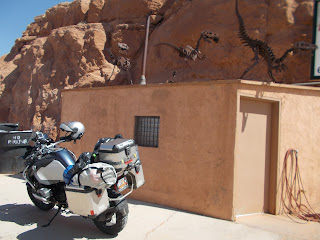 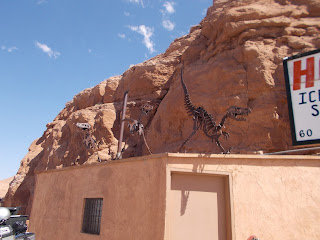 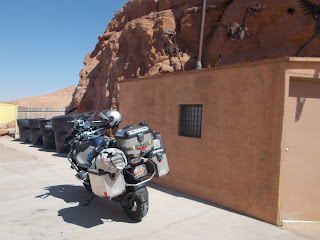 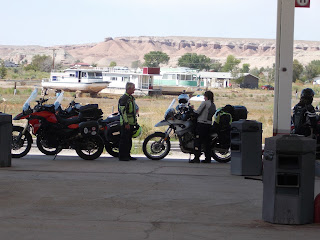 From Hanksville, we continued on UT24 north to I-70 where we slabbed a few miles until we reached the Moab exit on UT 191.  Riding into Moab was an experience!  It's been quite a while since I visited there and my goodness, it has gown unbelievably!  Huge, expensive hotels everywhere along with fancy restaurants, pricey campgrounds and a LOT of traffic.

We had previously agreed to meet another couple of WAR folks at a restaurant called Eddie McStiff's. 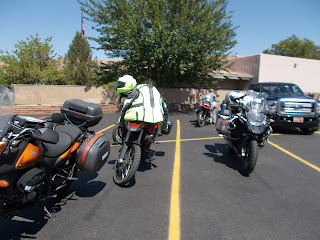 Our group heading onto the patio for lunch at Eddie McStiff's. 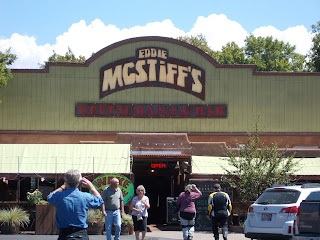 We were fortunate to have Samantha and Cheyenne join us for lunch.  We spent a few hours nibbling our food and telling stories.  What a fun time and the temperature was perfect, not hot!!! 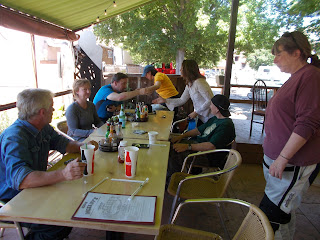 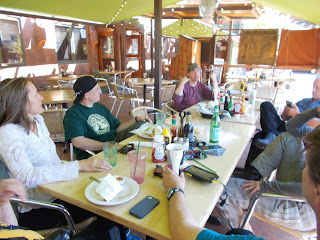 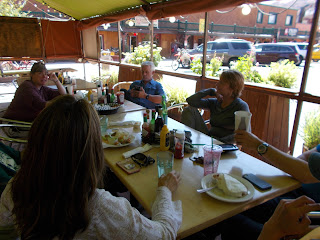 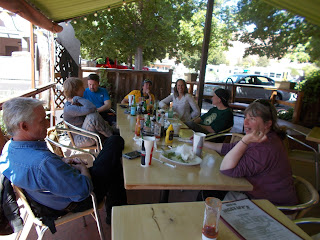 After lunch we all kind of went different directions.  Jude and Andreas headed back to Torrey where they had their gear stored at the campground cabin.  The rest of our group headed to their Moab motel to clean up before an evening ride.  And, I headed to the Moab KOA after calling a number of other campgrounds.  Jeez!  You'd think it must be a palace at the prices they were asking.  I , again, opted for a camp cabin as the clouds were rolling in and the weather prediction was for storms throughout the night.  I got my cabin at a premium price but still less than the $200 motel rooms.

Our plan was to meet up the next morning and ride through both Arches and Canyonlands National Parks.  However, when I woke up, I had a desire to go home.  I was having a wonderful time with everyone but home was tugging at me.  I needed to go home.  So, I texted the group that I was heading home and for them to enjoy the day.  I've been to both Arches and Canyonlands a number of times so it wasn't like I was missing something I had never seen before.

I''m pretty sure the WAR peeps had a wonderful day exploring the parks on their motorcycles.  I, too, had a wonderful day.  I decided to go south from Moab on Hiway 191 to Bluff, UT where I would then ride  Hiway 163 through Mexican Hat and Monument Valley to Kayenta, AZ.  I made a stop in Monticello, UT for brunch then just rode.  I made a quick stop in Kayenta where I then took Hiway 160 to Hiway 98 that took me directly to Page, AZ where I made a fuel stop.  From Page, it was an easy ride home.  The weather threatened a few times and I got spritzed but nothing serious.  It was a good ride and I enjoyed myself and the Beastie Bike.

I got home around 8:00 pm and my honey had dinner waiting for me.  Gosh, I'm a lucky, lucky lady as well as a Delicate F**king Flower (and don't you forget it!).

It was wonderful to meet some of the WAR peeps and hang out with them for a while.  I hope our paths cross again in the future.  It was also nice to be home.  I've been out riding pretty much non-stop since I took delivery of the Beastie Bike and now I think I need to stay local for a while.  Maybe Eric and I will explore some of the gravel/dirt roads nearby on day trips.  I do have a big event coming up at the end of September and will be sure and blog about that.

Hey, I'll blog about my day trips too.  It's all just fun.  I'm fortunate to have such a caring, supportive, enabling husband and a great group of friends.

Thanks for following along!  More adventures in the wings ;-)  Stay tuned.....