We took our time getting on the road today.  After all, we only had about 250 miles to go.  When we woke up, it was raining!  Yes, raining!  Well, not very hard but it certainly was wet and the sky looked ominous.  Oh well, we have the gear so I zipped up the vents and loaded up the bike.  We left Grand Junction, CO after a lovely brekkie (yes, Bob, that word again!).

Our route was, well, boring.  Just a slab east on I-70.  However, this particular section of I-70 from Grand Junction to Denver is about the best you're ever going to see on an Interstate.  It follows the Colorado River and then up and over the high mountain passes.  By the time we got going, the rain had stopped but the clouds were still hanging low.

Not too far out of Grand Junction, just past some road construction where we had to ride the shoulder, and then through the tunnel, Eric suddenly pulls over.  I was not prepared for that and I was in the passing lane.  I finally managed to safely pull over slightly ahead of Eric.  What?  Did he need to adjust some gear?  What?  Well, he had a flat back tire.  Crud!

The cause of the flat was quickly apparent.  There was a rather large hole in the rear tire, not on the sidewall, but not in the center or ride surface either.  Weird huh?  Because Eric was riding the Wee, he didn't have any of his regular on the bike tools and repair stuff.  He only had that little, itty, bitty top case which was stuffed full of clothes, his CPAP, toiletries and odds and ends.

My bike had the flat repair stuff, sticky strings, plugs, glue and compressor.  I've had that compressor since 2007 and it has never been used.  Well, it was about to be de-flowered. 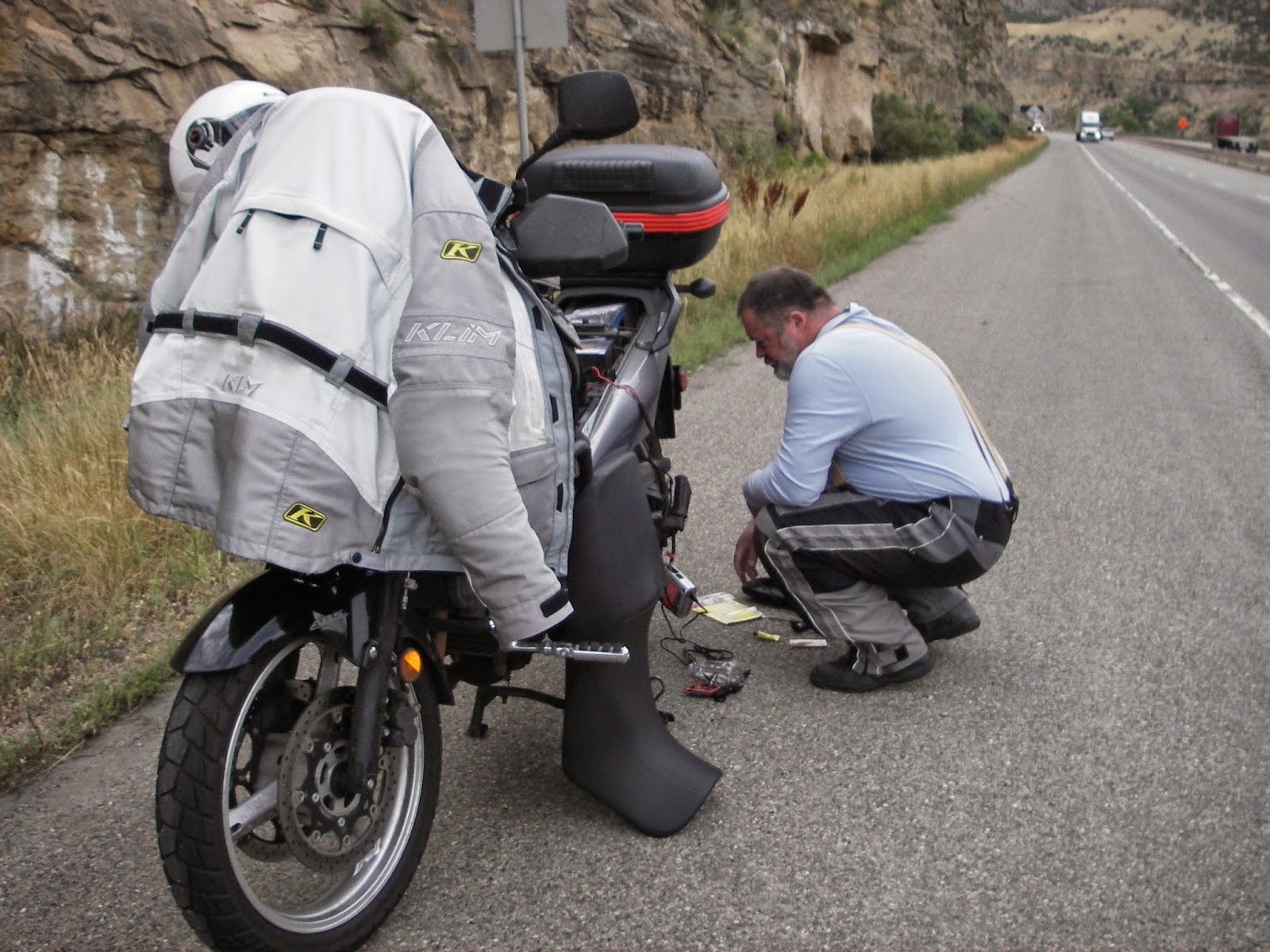 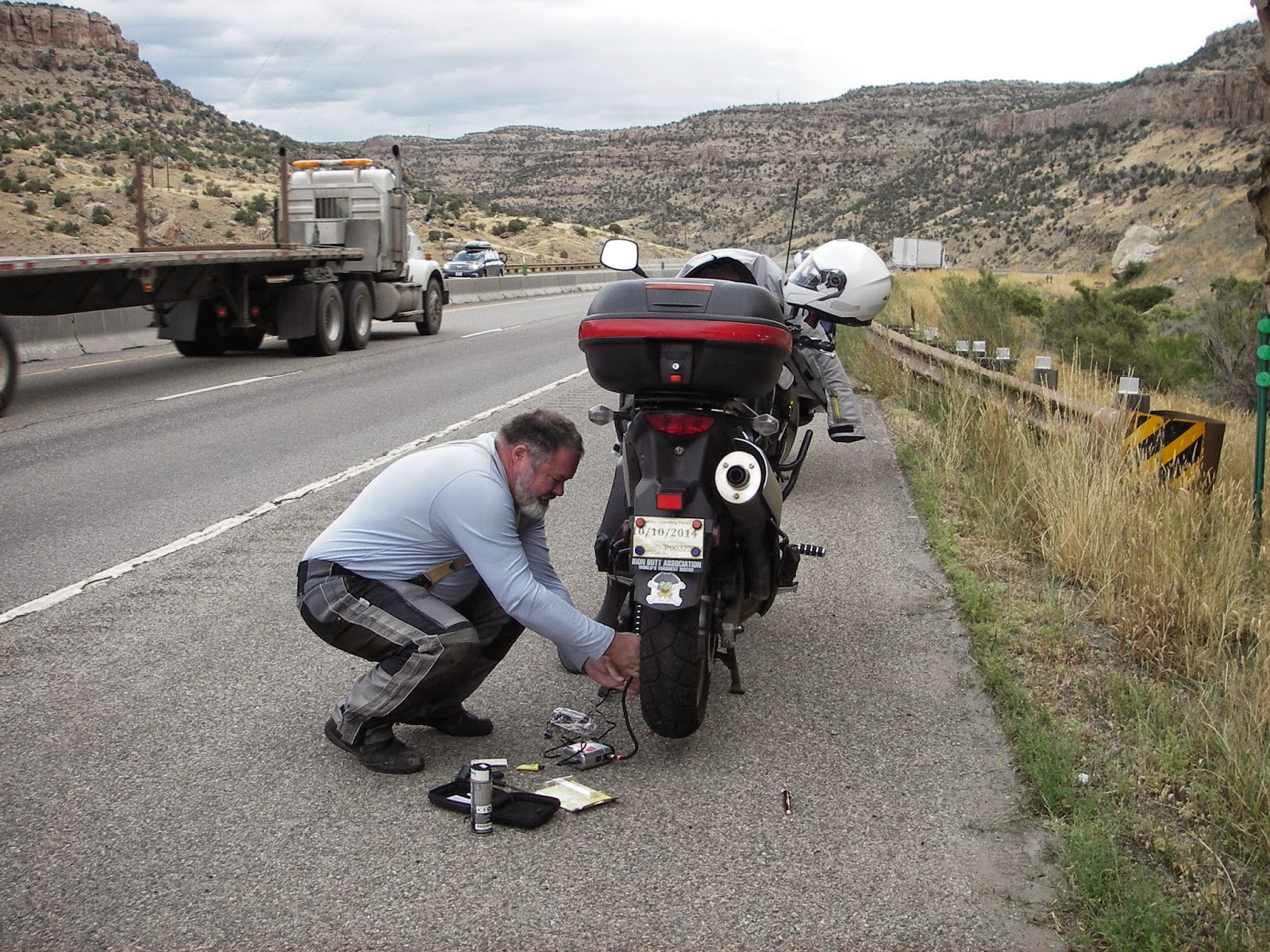 Fortunately, Eric is quite experienced at plugging tires and quickly had things under control.  The compressor was a bit slow but it did the job.  In short order, we were back on the road.  We rode for about another 20 minutes and Eric was pulling off the road again.  This time I could see his rear tire was flat.  Crappo, not again.

So, out comes the tire repair kit yet again and this time Eric used two sticky strings with lots of glue.  Got the tire aired back up and on the road again. 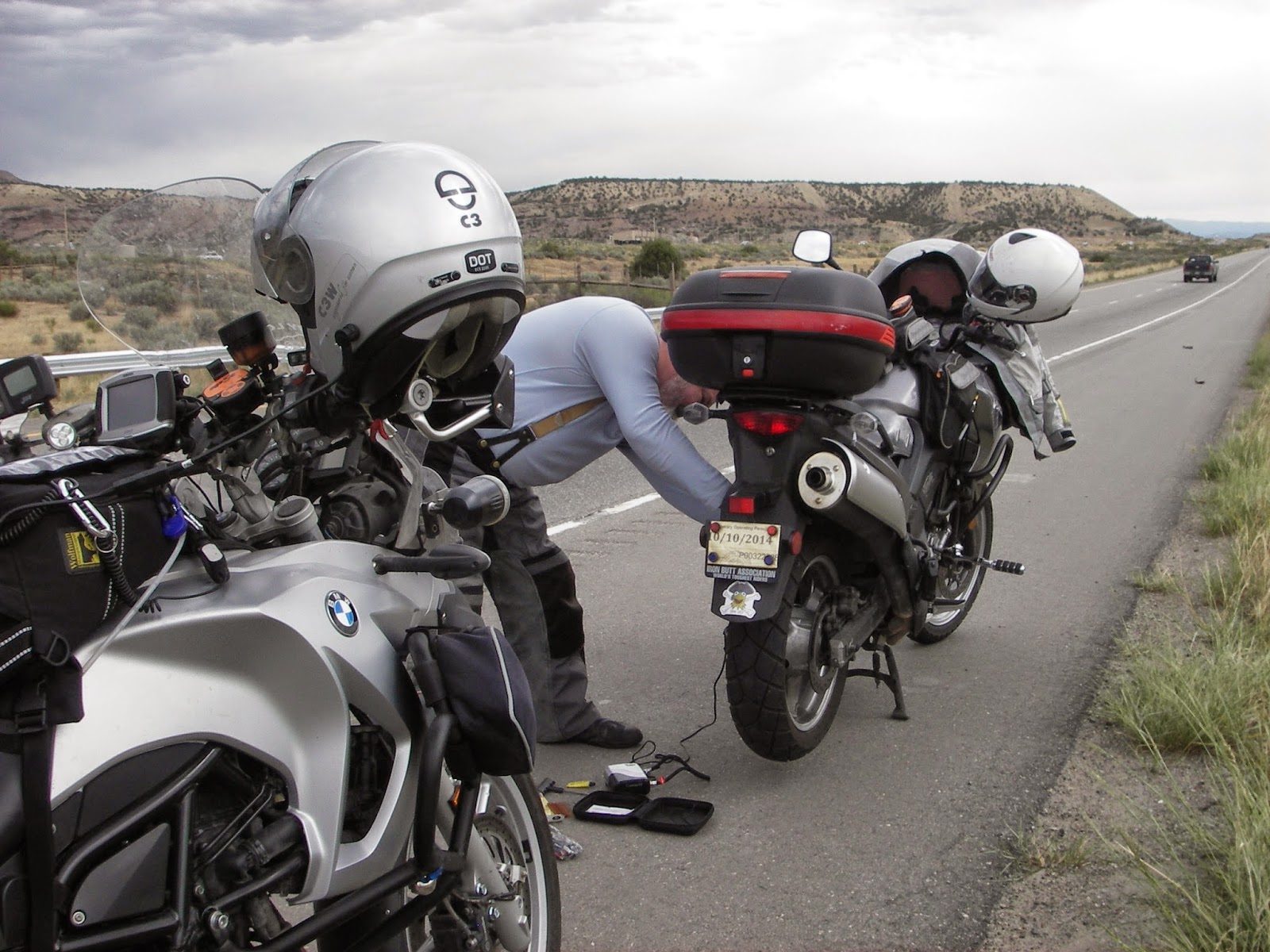 I took the lead about 20 miles out of Denver because I had a GPS.  I don't usually lead but no problem. I just followed Ms. Garmin's instructions and we landed at the host hotel just before the heavens let loose with a big shower.  We unloaded, well, I unloaded my bike (Eric didn't have much to unload) and got settled into our room for the next five days.

Once sorted, we went down to the lobby to see who had arrived.  Surprisingly, there were a number of folks already here.  We had a great time visiting, talking, visiting, talking.  Well, you get the idea.  My motor mouth was so busy that I forgot to take any pictures until much later.

This is absolutely one of the most fun events to attend.  Folks from all over the planet are here all with the same thread that holds us together, long distance motorcycling!  And the stories they have to tell, well, someone should make a movie!

Here I managed to capture a shot of Roger Van Santen as he arrived at the hotel after completing a Saddle Sore 1000.  Oops, it might have been a Bun Burner Gold.  Heck I don't remember, but I do recall the great smile on his face as he got off the bike! 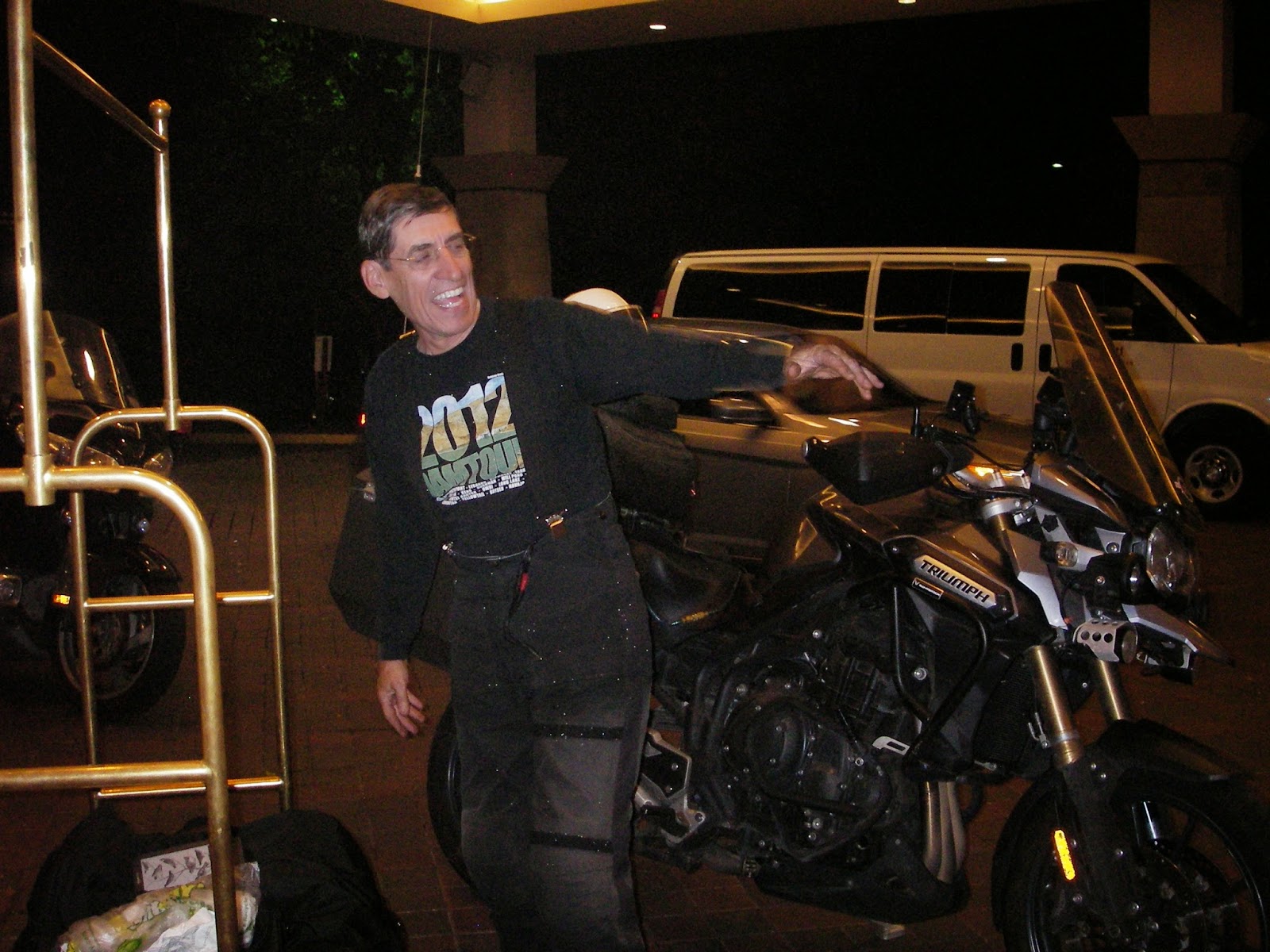 Sorry, but that was the only evening picture I took.  I'll try to be more diligent about snapping pics so I can share them with you.

One of the best things about this type of event is that it brings together so many people with similar interests.  I've met a boat load of great folks on Facebook who are IBA members and this event provides the opportunity to actually meet them in person.  I'll talk more about that in another post, but just so you know, I immediately recognized several FB/IBA peeps and had big hugs.  I can't wait to have more chat time with them.  We stayed up chatting with folks until almost midnight.  It was nice to climb into our lovely king size bed and call it a day.

This morning, Wednesday, August 20, I managed to snap some pictures of the bikes accumulating in the parking lot.  Every direction was bikes of all makes and ages.  I suspect by tomorrow, the parking lot will be overflowing!  It is so much fun to hang out in the parking lot, checking out the different bikes, speaking with the riders, swapping stories, kicking tires, you know, that kind of silly fun stuff :-) 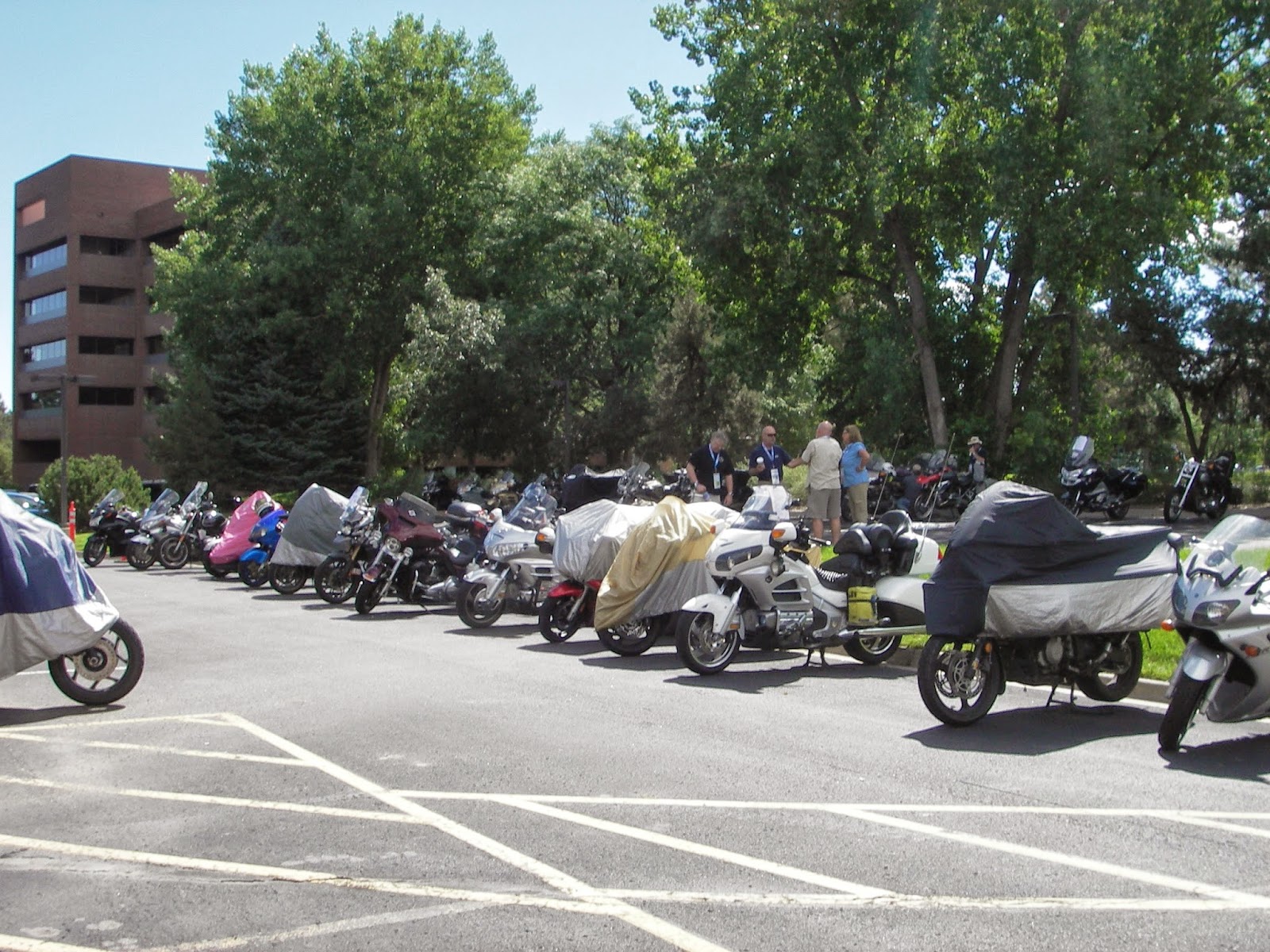 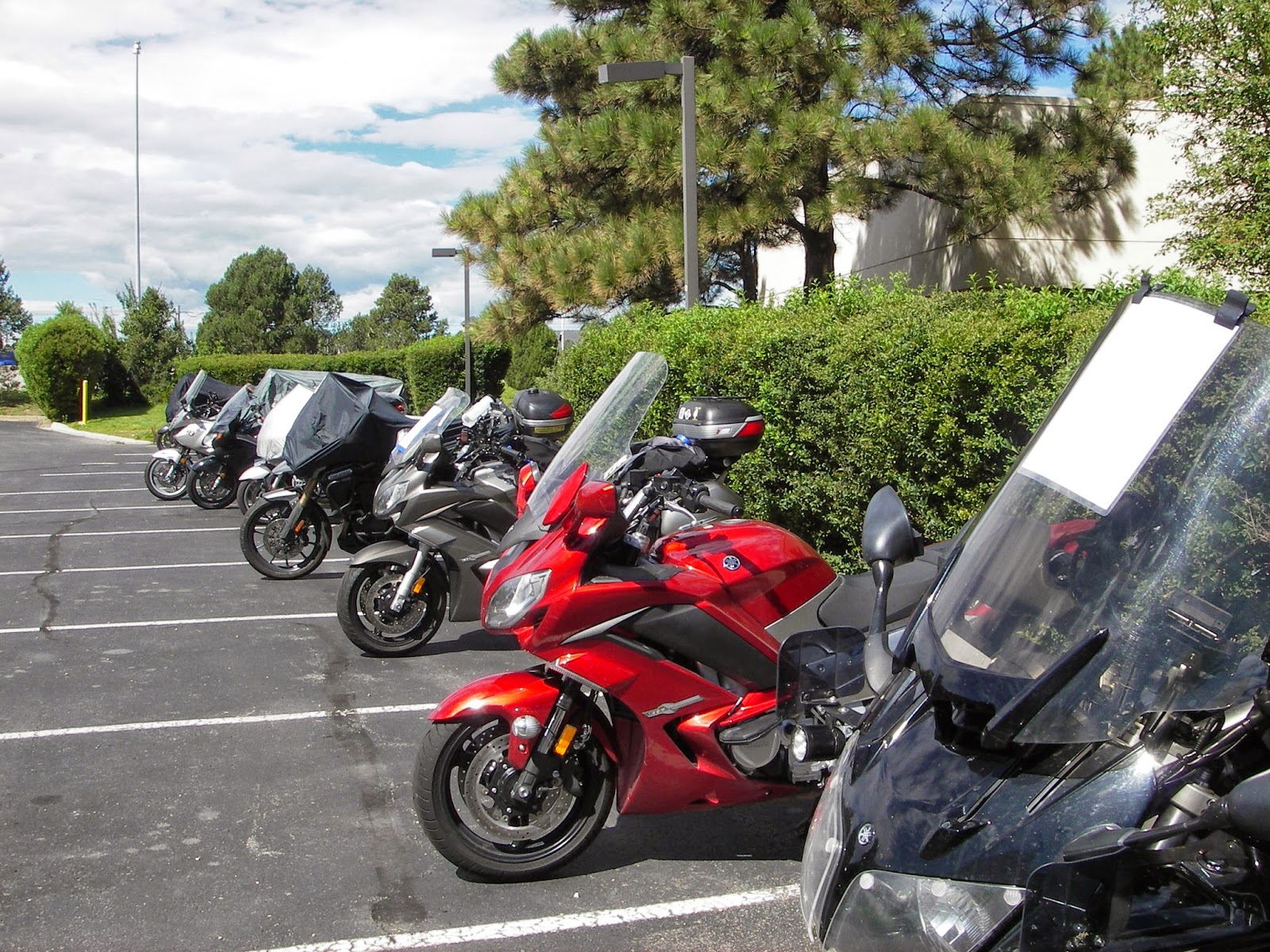 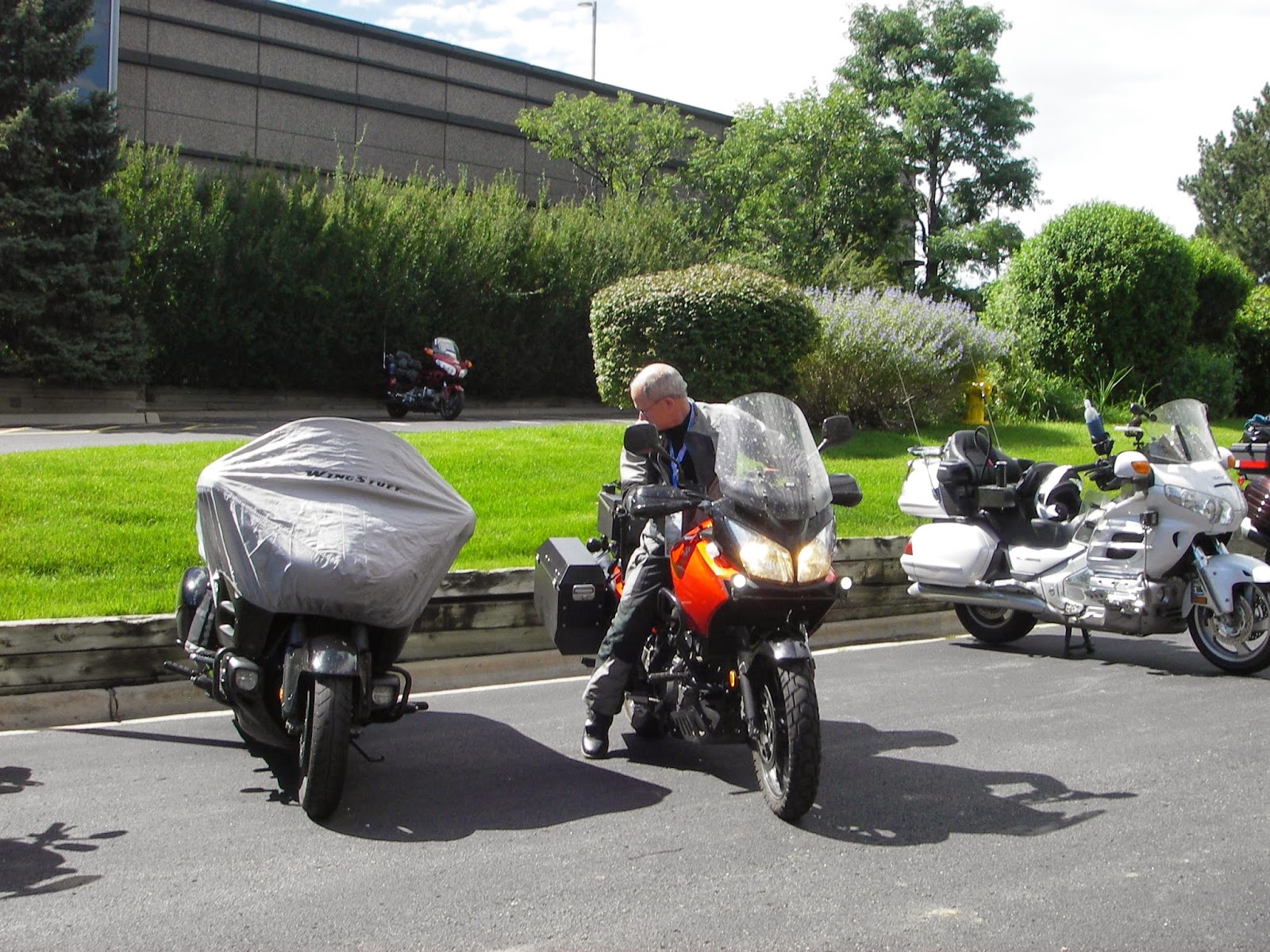 I caught Rick Miller hanging his laundry out to dry.  It probably didn't take very long because it was hot this morning. 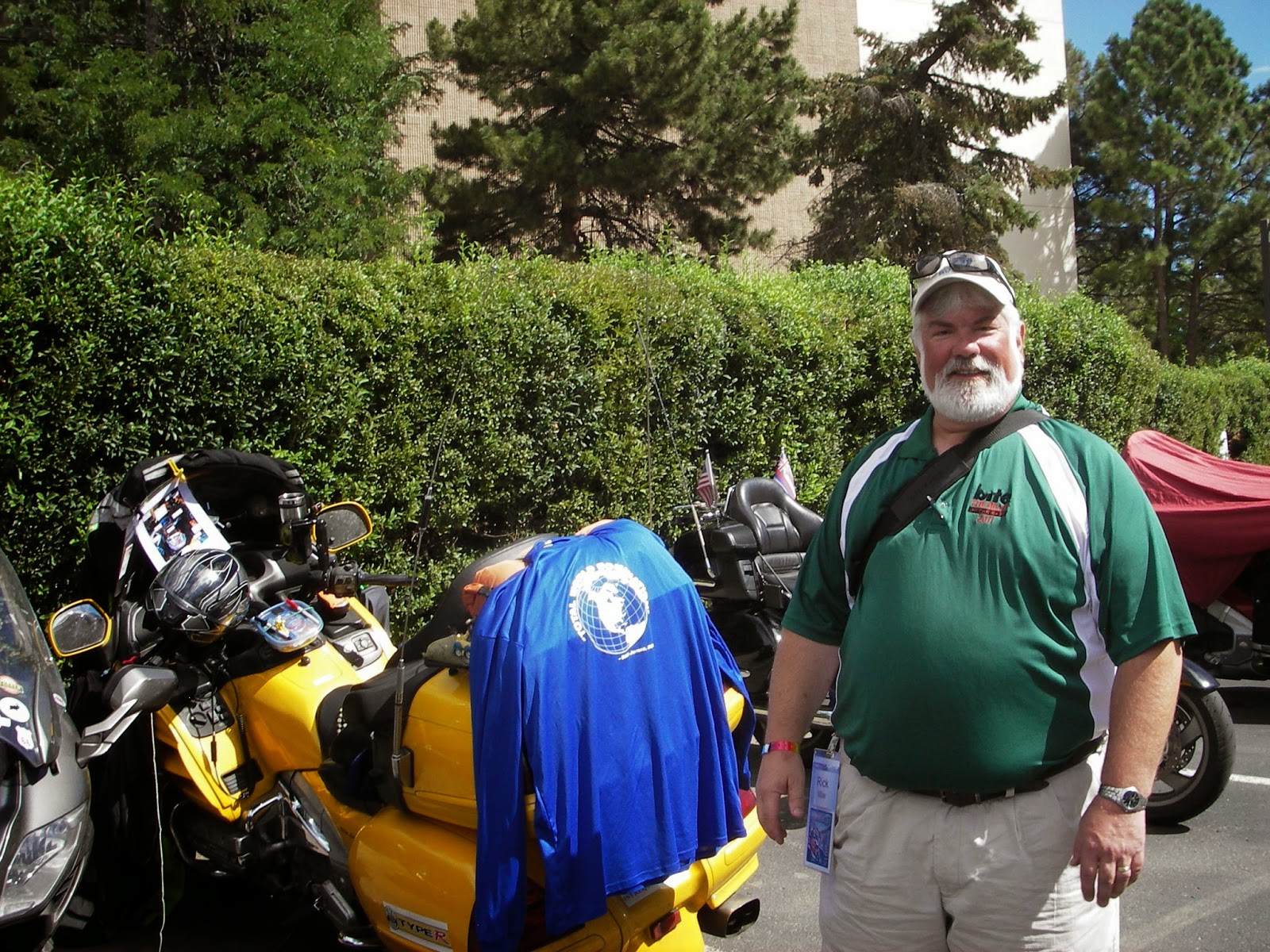 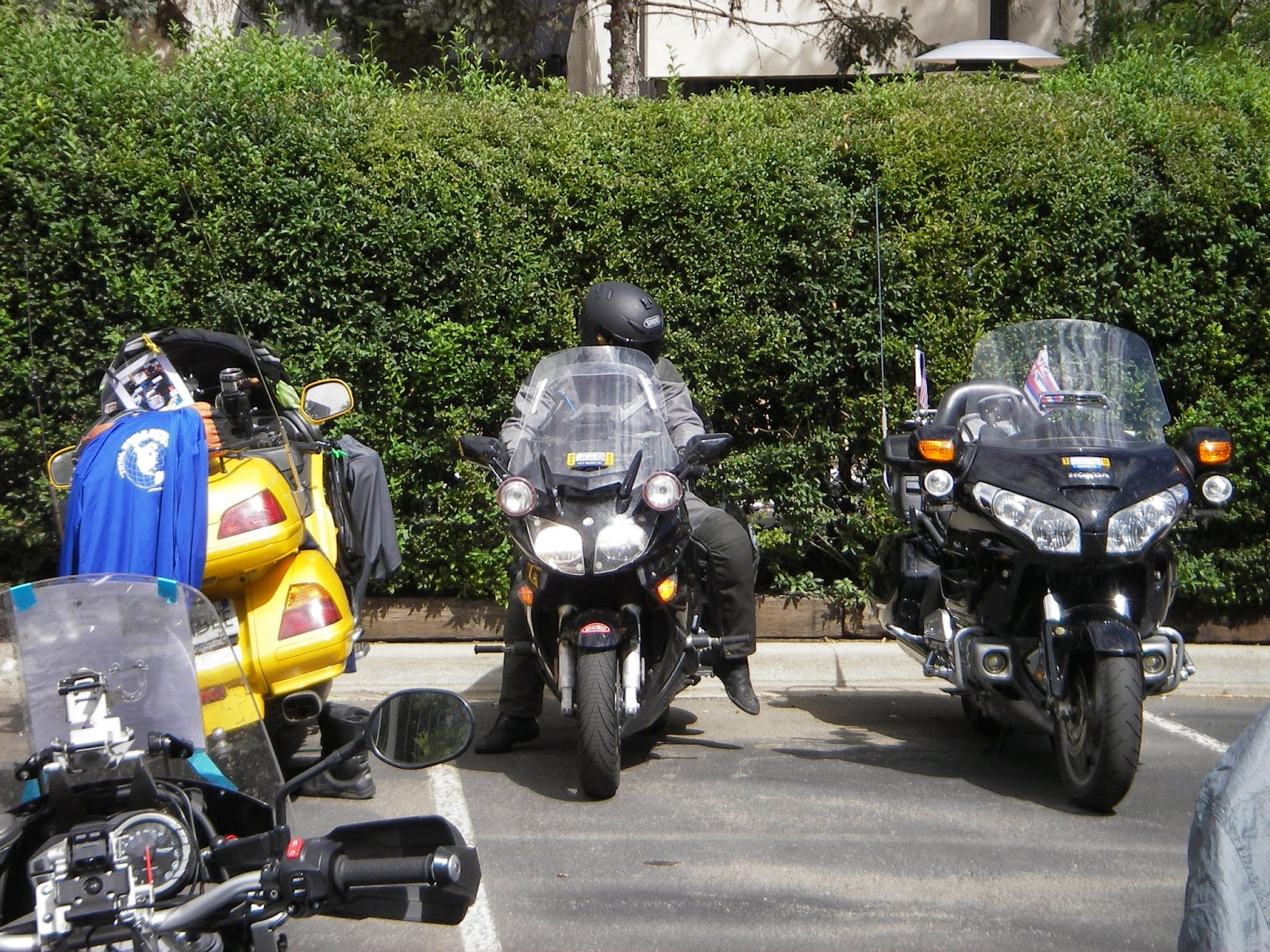 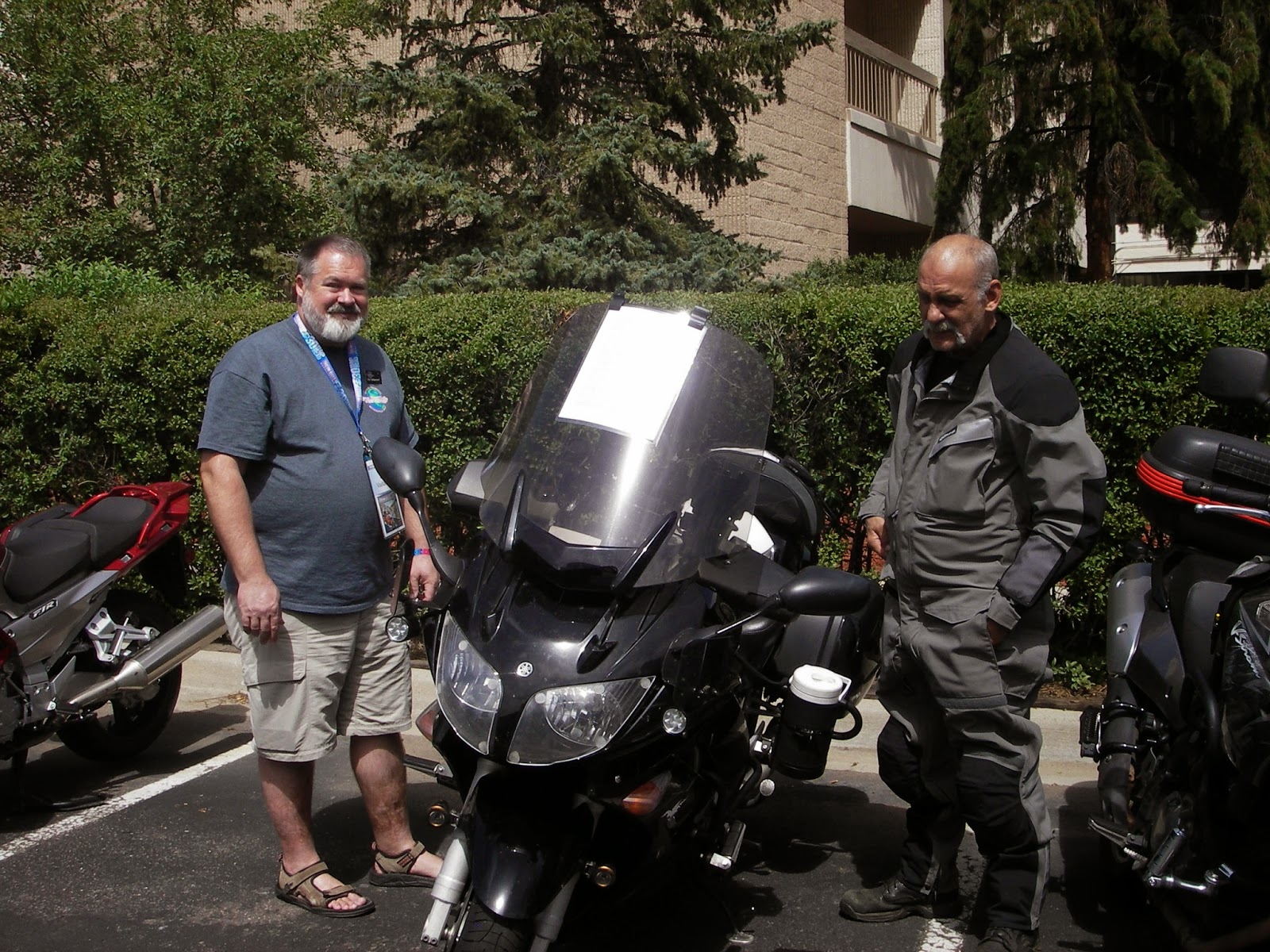 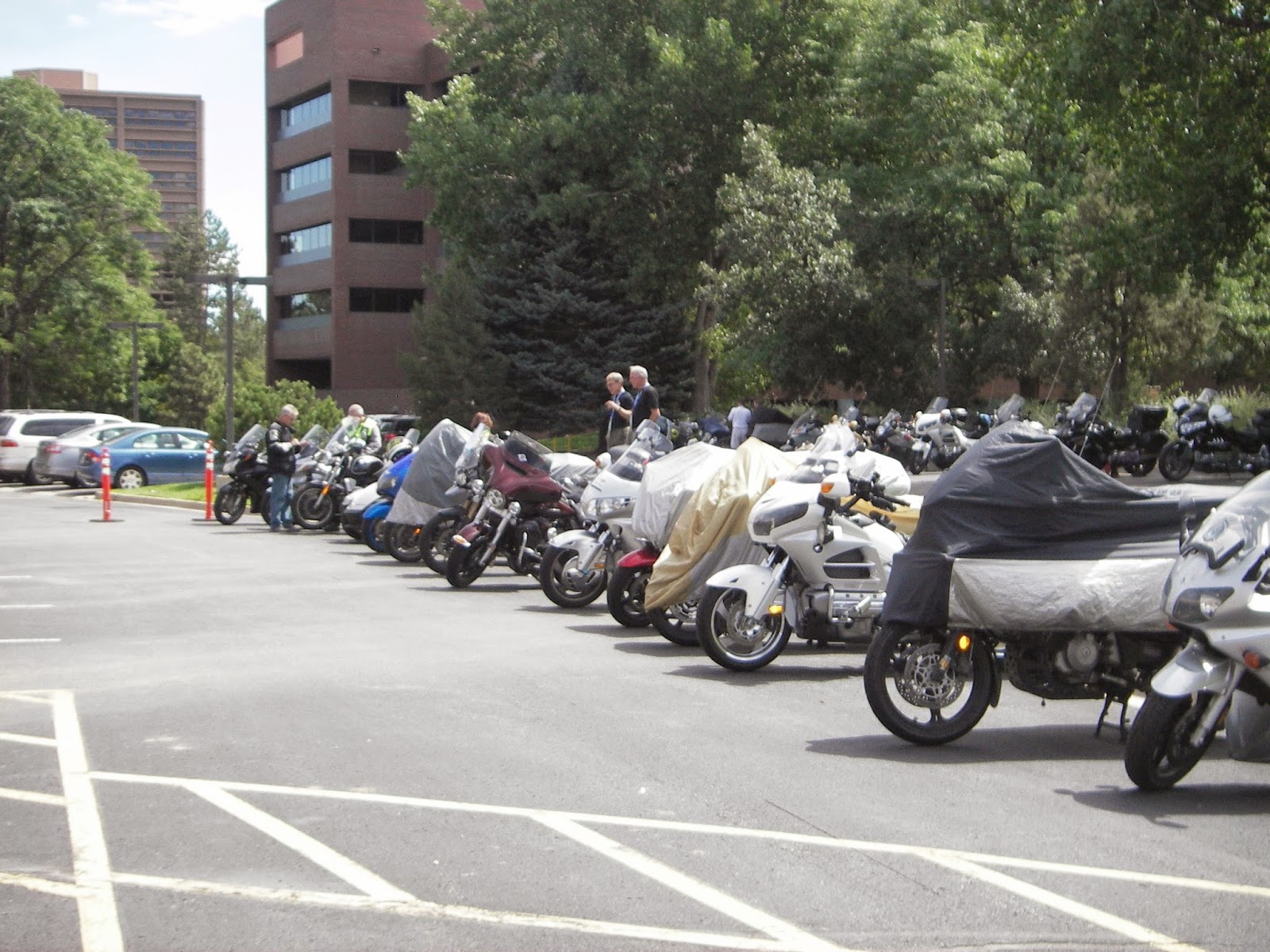 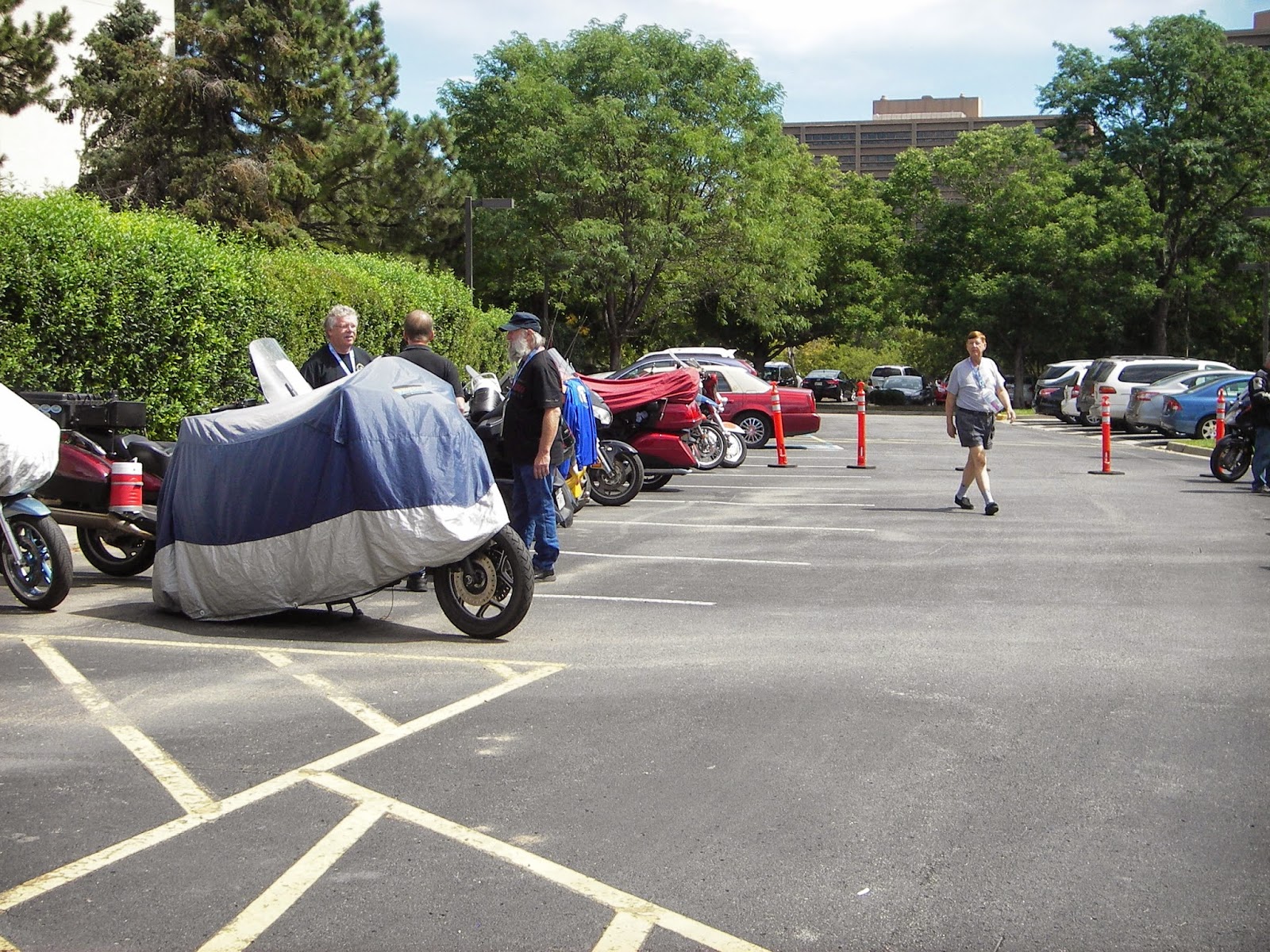 Chuck Lackey, Garry Springgay, Mike Riley and Eric were kind enough to pose for a picture. 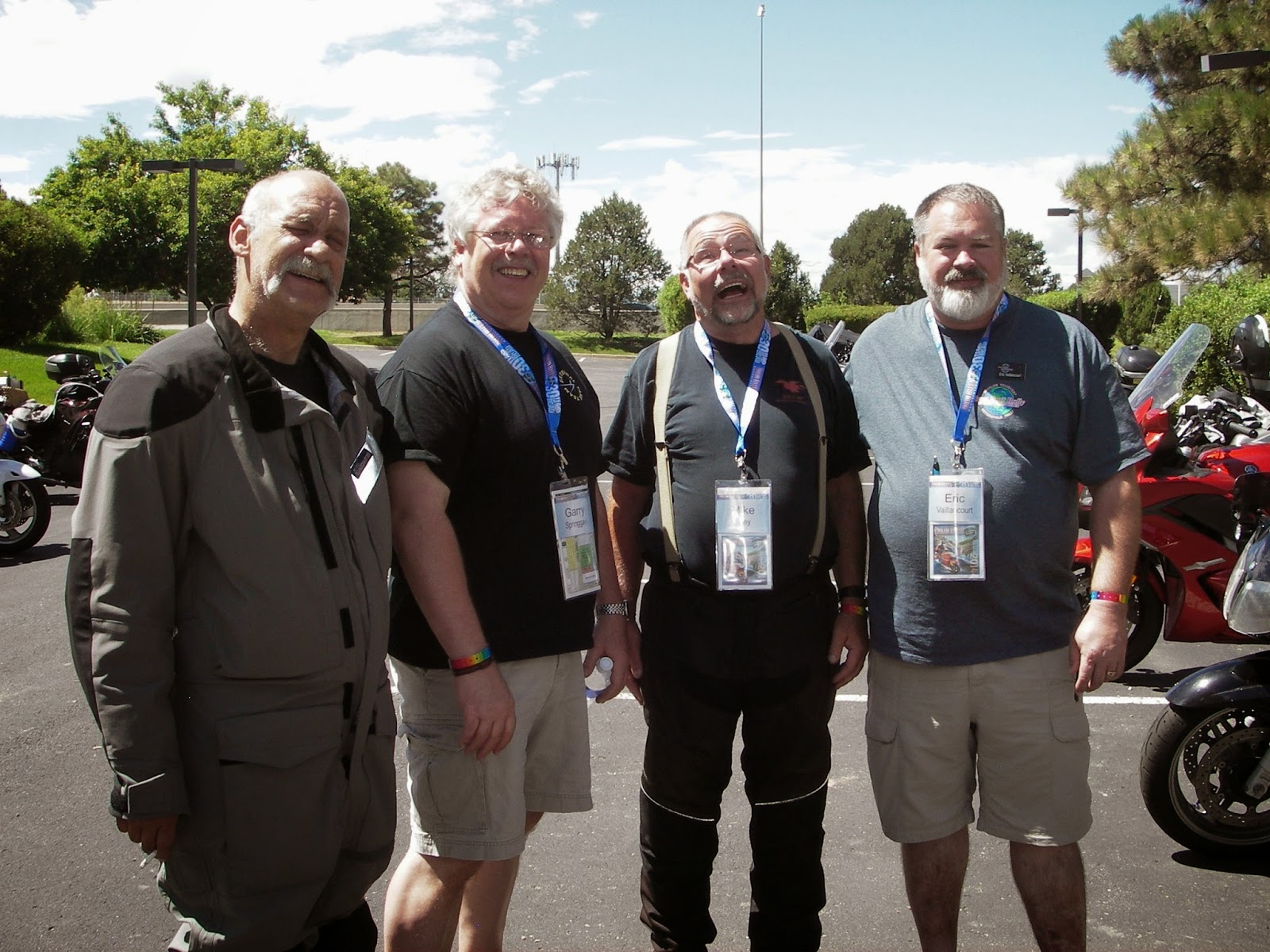 We just happened to step out the front door just when Tom and Rosie Sperry pulled up!  Yippee.  The party is about to go into full swing :-) 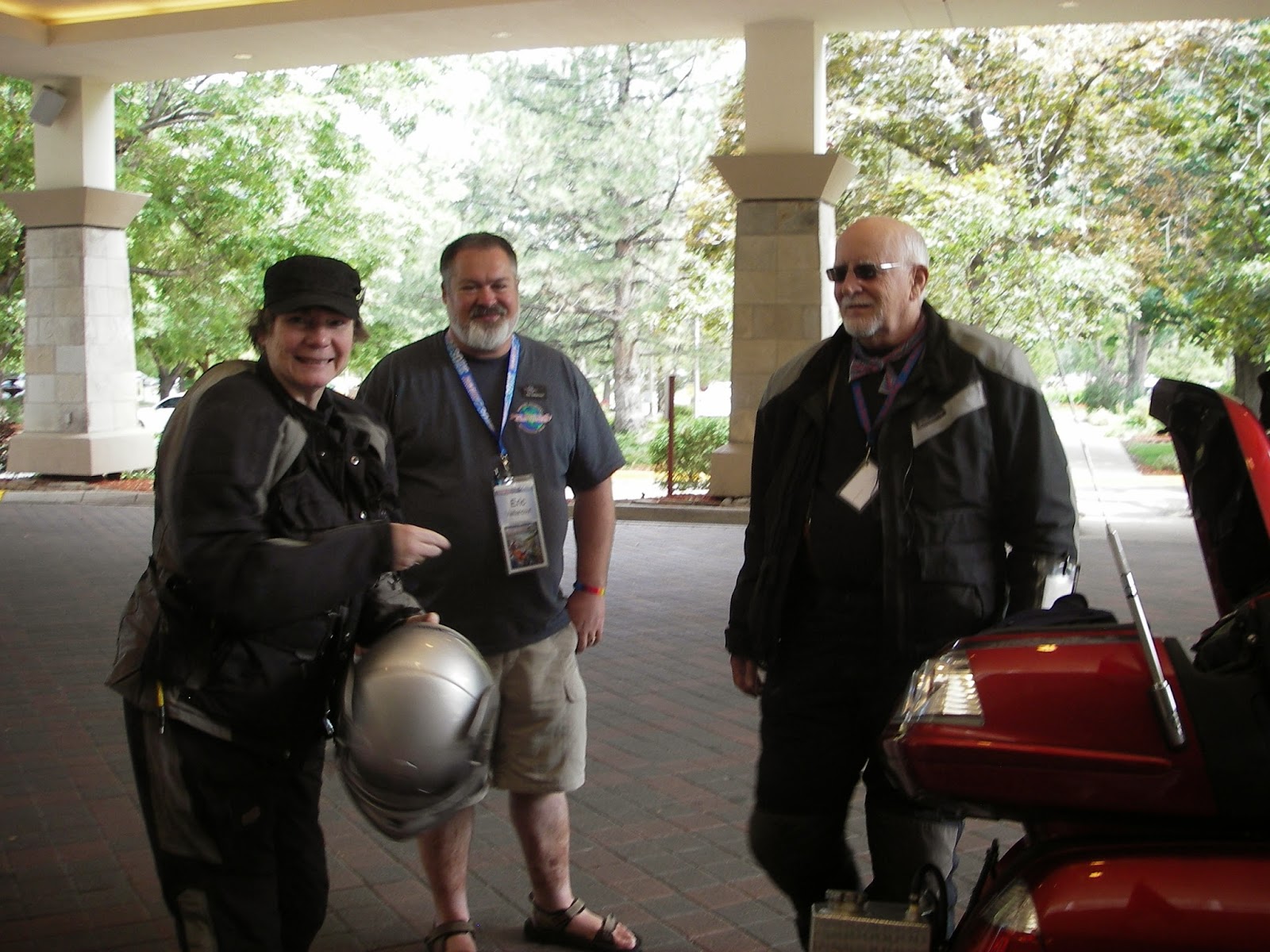 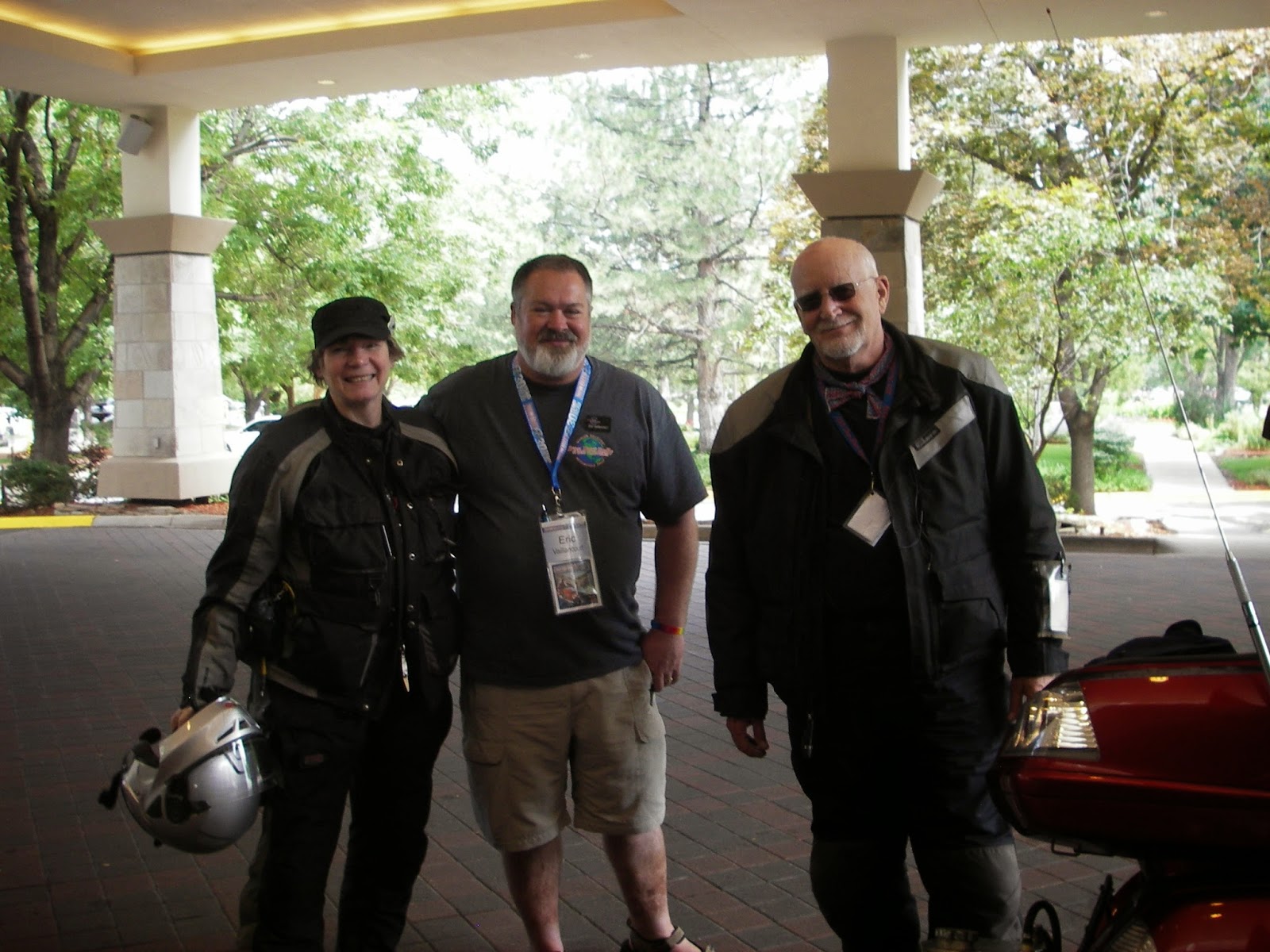 We rolled in too late yesterday to complete our registration.  So, this morning before brekkie, we took care of that.  Our swag bag included our name badges with the event schedule, an awesome event tee shirt, an Iron Butt pen, a cool little dry bag and raffle tickets!  It wasn't until several hours later, when I was looking through everything that I realized my name tag also had the title "Ambassador".  WOW!!!!!!!  Really?  Me???  hahahaha

I had to track down Lisa Landry and inquire about that fantastic status.  I told her I was honored and did I get that awesome status because I can't keep my mouth shut and must talk to absolutely everyone?  Well, yes, that about summed it up :-)

So, now it's official.  I'm thrilled to be an IBA Ambassador and don't be at all surprised if I walk up to you and start talking a mile a minute :-)

Today is not over yet.  It's only 5 pm but I wanted to get this post out before things get real busy.  Seminars, classes and events begin in earnest tomorrow.  I'll try to take more pictures and keep you updated on things going on here.