Today, October 28, was a rest day with no excursions planned.  We went to bed early and slept in late – much needed rest.  Our day was spent doing nothing which was delightful.  We were able to get on the internet for a brief period but, alas, I was unable to fully update the blog.  For lunch, we decided to skip the buffet and ordered a cheeseburger at the bar.  Good decision!  Our burger was a bit different than what we’re used to at home but it was delish and was served with French fries.  We split the sandwich and felt quite satisfied.

Tonight was the big Cross Egypt Challenge 5th Anniversary Gala dinner.  As usual, we waited and waited and waited.  Dinner was supposed to be at 7:30 but it was much closer to 9:30 before we ate.  However, we did have a beautiful setting on the hotel lawn next to the Nile River.  The moon was almost full creating a lovely glow on the water.  There was a group of Egyptian musicians meandering their way around the various tables as they played traditional music.  Before dinner was served, we were graced with the presence of the Mayor of Luxor himself who spoke to us welcoming us and telling us he and his town were delighted we chose to visit Luxor.  Following speeches we were set loose on the buffet and BBQ.  Dinner didn’t take long and we headed to bed as tomorrow would be an early day for riding. 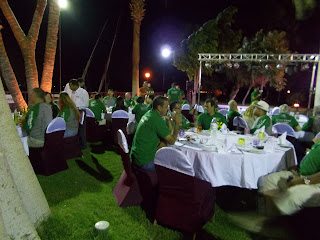 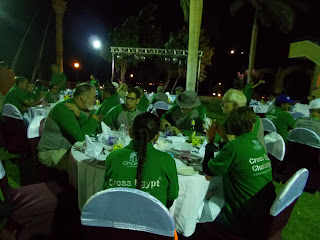 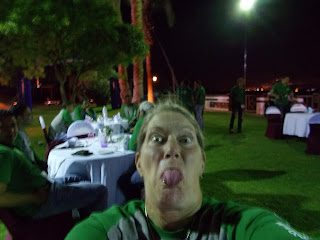 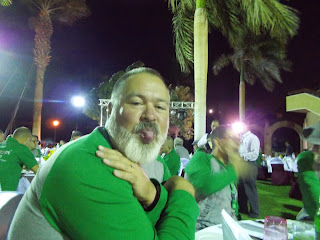 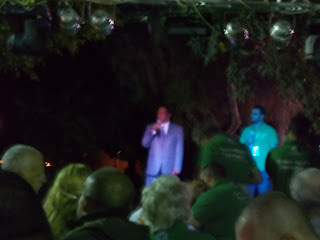 Our 4:45 am alarm came way too early but we jumped up, eager to see what the day would bring.  Our bags were quickly packed and we slogged our way to the hotel lobby to drop off the luggage and grab some brekkie.  In line to fuel up the scooters and then finally, we’re off!  Where were we off to you might ask….well, we were off to Marsa Alam where some of the peeps would be scuba diving or snorkeling.   Marsa Alam has been a secret Mecca for divers for many years, but only recently has become more widely known.  Some of the divers in our group were very excited to check this box off their bucket list of life long dives.  All of us were to “camp” for the night.

Our ride today took us onto a lovely, curvy road.  Although the pavement was bad, no horrendous, in part, it was still a very fun ride!  I spied a camel carcass alongside the road – it was BIG! And ugly J  We also passed two herds of wild camels.  The first we’ve seen since Cairo.  Very cool.

We have mostly been traveling at around 80-90 kph today.  When we hit the bad pavement portions, of course we slowed down.  However, you would be tootling along at a good clip and then all of a sudden the pavement went from pretty decent to oh my heck!  We were doing the Egyptian version of the Hokey Pokey.  Left arm out, left arm in, right leg out, right leg in, hahahahha.  We had our road signs down pat and were using them voraciously.  I literally laughed out loud in my helmet watching those in front of me hokey pokey with their legs and arms pointing out various road hazards.  I think we missed most of them and those we hit weren’t serious enough to stop anyone.

A few hours into our ride, one of the riders in front of me pulled off to the side of the road.  His muffler was dragging!  No surprise, we were hitting a ton of bumps J  Fortunately, both Eric and I had no issues, however, I have noticed my windscreen is now starting to vibrate when at idle.  Those rough roads take their toll! 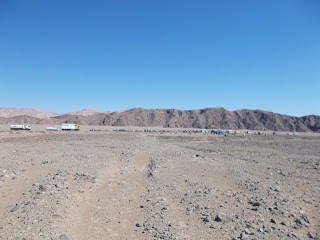 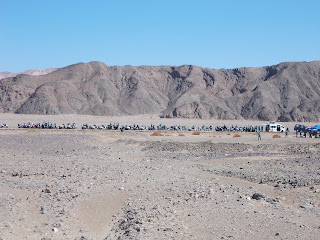 A few photos of a lunch stop.  Notice the lack of a place for the ladies to pee!  I'm amazed at how barren the desert is here.  Not a bit of vegetation, nothing but dirt and sand and rocks.

As we reached our destination for the day, we took a dirt road off the highway for maybe 1 km and what did we come upon?  A camp….a camel camp, (wadi ca’mel)….a camel camp with a camel racetrack….and an open air restaurant (buffet & bbq)….and a LOT of small REI or similar tents set up in the dirt with more being set up as we parked and unloaded luggage, etc.  Hmmmmm…..a building with two toilets and two showers and lots of tents with a second building, about the same some distance away with similar amenities.  Think primitive camping with pretty much zero facilities, not even a bush or a sand dune to go take care of business.  Now, remember we were a party of 70 riders and additional staff – so say maybe 100 peeps.  We weren’t the only peeps there.  Other similar tents were set up for other parties along with a number of Bedouin tents off on the hillside.  So, now we have “camping” for at least 150 peeps with limited facilities. Sound like fun?  Yup, it didn’t sound like fun to me either.

We found some shade while we waited a bit before we were assigned a tent.  We were given a tent, complete with two thick camping pad/cushions, but no shade for any of the tents.  There had been talk of solar power for charging, which had been described in a manner that made many of us wonder that the tents would each have this.  That was not the case.  Nowhere to sit except the tents.  The Red Sea beach was not visible but we were told it was only a 200 meter walk!  (other folks told us it was a looooong 200 meters)  They let us know the camel races started at 3, which they did.  The organizers did tell us a night of camping was in store for us, but not really to what degree, We were told about the camping night after we had signed up and paid for 4 or 5 star hotels every night.  Just to say, our expectations were not quite what this stop turned out to be.

When we entered the camp, we were told that all transactions had to be done in their camp currency which they called Guyoots (spelled phonetically, not correctly).  You could purchase a Guyoot which equaled one Guyoot for five Egyptian pounds.  Guyoots were used to purchase food, water and who knows what else!  We found out later that if you had Guyoots left over they would not buy them back.  Hahahaha, we were smart enough to not purchase any Guyoots ;-)

We had been on the scooters for the usual day in the hot sun and all of us were ready for a good shower, a cocktail or beer and an enjoyable afternoon.  A three person REI type tent on the dirt was not especially welcomed by all of us.  For those not doing the diving/snorkeling, it was an empty afternoon. The Characters of Egypt Festival showcased different Bedouin customs and had many things to see.  The festival did go on later than some stayed up for. 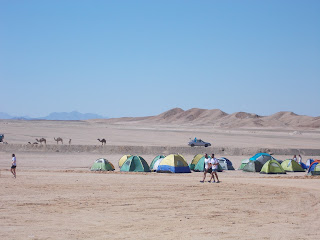 LOL, camels in the background! 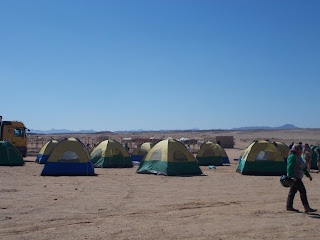 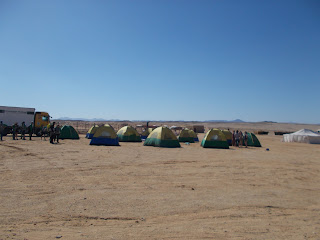 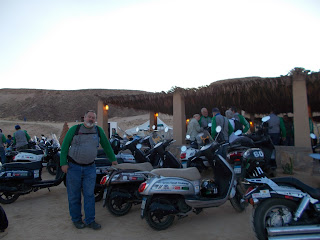 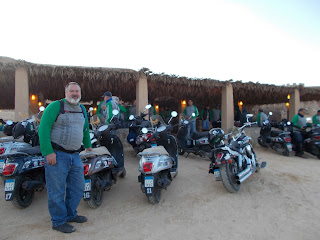 This is where the Camel Camp meals were served. 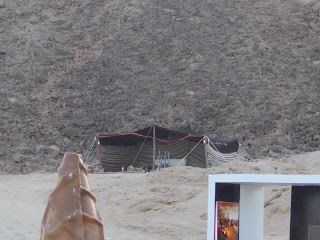 A Bedouin tent on the hillside.

We again were up before 5 am and fueling the bikes prior to brekkie.  The day’s ride was to El Gouna, just north of Hurghada along the Red Sea.  El Gouna is a walled city that was created much from scratch in the 1990's by an Egyptian multi-billionaire as a spot for wealthy Egyptians to relax and play, but has also been getting more western tours in the last few years.  Created from scratch as a resort city, it has everything you might expect, and more.  Though a little dated now, it is very well established and run.

An uneventful but fun scooter ride.  Not too hot today - just pleasant.  We have a beautiful room here at the Rihana Resort, part of The Three Corners hotel and resort holdings, which had all the required amenities.  Our ride today, again along the Red Sea, with stunning scenic views, went without mishap except for a minor wrong turn that was quickly corrected and one more muffler departing another scooter.  For the most part, everyone rode well today and we were all happy to get to our hotel shortly after noon.

Of note was that we fueled upon arrival, to "steal some time from the next day".  Along that line, we also were informed that we would start 15 minutes early for wake up call and attempt to hit the road at 0500 in the morning for our last day's ride into Cairo. 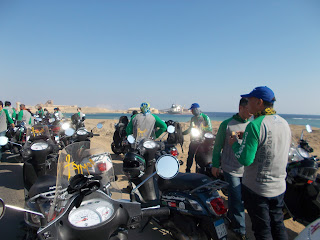 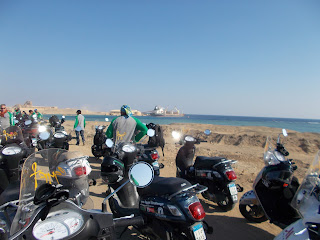 A fuel and rest stop along the Red Sea. 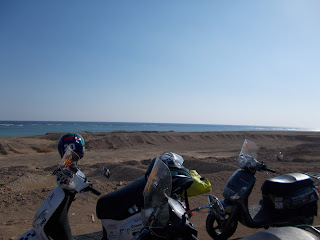 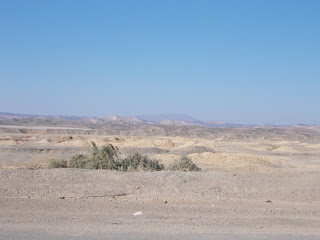 What's this?  Some vegetation in the desert?  We did spy bits of green growing here and there along the Red Sea. 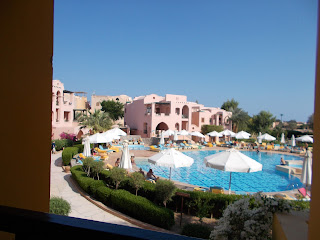 The view from our room tonight. 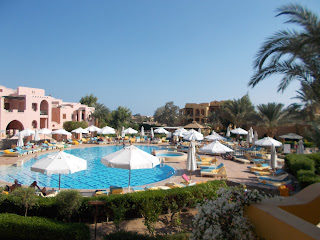 It was a very nice place!

Everyone pretty much called it a night as soon as the sun set and we finished dinner.  Tomorrow is our last day and will be our longest day, about 500 kilometers.  We will be riding through Cairo to Giza for a big finish of the Cross Egypt Challenge at the Pyramids!  Stay tuned for details.