Our last day is already here!

Last night we had our wrap-up meeting where we applauded the staff for their superb efforts in making the Cross Egypt Challenge happen.  They were simply awesome.  Given the logistics, personalities and bureaucratic red tape, they did a fantastic job.  A well deserved round or two of applause for all of them! 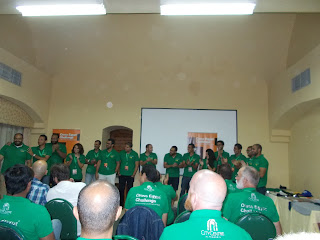 We had the opportunity to provide some written feedback on our experience and we were all given very nice certificates of completion for the Challenge.

We went to bed fairly early last night because today our ride was to start at 5 am.  We had a 4:15 wake-up call so we could have a bit of brekkie before taking off.  The scooters had been re-fueled the day before so all we had to do was put our luggage out front for pick-up, load the scooter with our day packs and line up for take off.

Surprisingly, everyone was ready to go at the appointed time.  We left El Gouna before dawn with a police escort in the lead.  Today, instead of groups 1, 2 and 3, we were split into 6 groups for the entire ride.  Smaller groups for the ride into Cairo seemed appropriate.  The first two groups were the motorcycles and large scooters.  We were in group 4, the second group of scooters with two groups behind us.  For the most part, our group rode well and stayed together.  We were pushing to the finish.  At first, it seemed like we were going very slowly.  I kept looking at the speedo and we were only doing maybe 40 mph/60kph.  At our first stop, I made a comment about the slow pace.  Actually, I said something like it will be next Thursday before we reach Cairo at this pace :-)  One of the leaders heard me and said we needed to go slower because of the wind.

We had a fuel stop every 100 kms and if we pushed it, we might not make the fuel stop.  Well, that made sense.  However, after that particular stop and my comment, all of a sudden, the pace picked up!  Great, I really wanted to get through Cairo before rush hour and dark! 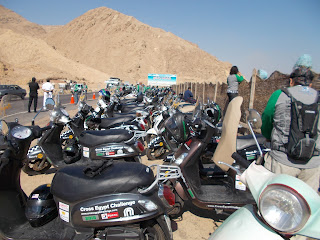 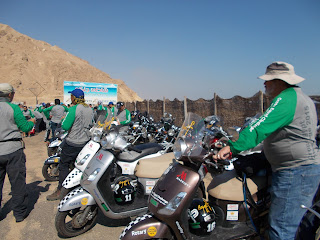 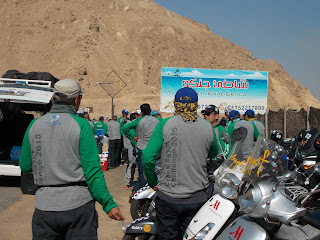 One of our splash and dash fuel stops.  Since our day would be 500 kms, we needed to be quick to fuel and get back on the road.  No time to pee for the ladies today!

For the most part, we rode alongside the Red Sea, a reverse route of our first day.  Two lanes, one in each direction so we rode single file on the right shoulder so cars could easily pass.  The weather was perfect, sunny and clear but not too hot.  We made good time, occasionally playing the Egyptian Hokey Pokey.

Our fuel stops became quite efficient and as soon as the last bike was fueled we were off again.  CEC staff thoughtfully brought water and juice up and down the line of bikes and scooters so that everyone had an opportunity to hydrate at stops.  We still had a police escort but for some reason, it wasn't as strong a presence as before and sometimes cars or other vehicles would get in between the groups of riders.  However, we basically stayed together.

Our longest day on the scooters both in hours and miles.  It was a huge push as we wanted to get to the Pryamids in Giza before 4 pm when the gates would close.  The closer we got to Cairo, the busier the traffic became.  The police did try to keep traffic from us but weren't always successful.  We rode through a rather long stretch of road construction which made me laugh.  The little scooters have little to no suspension but seem to roll over pretty much anything.  Sometimes I was in the front of the pack and other times at the back.  By now, I knew who I was comfortable riding with and who I wanted to stay away from!  The intensity was magnified as we were feeling the time crunch to reach our goal.

We actually pulled over for a quick fuel stop where active road construction was going on.  Obviously, no place for ladies to pee - along the freeway with cars whizzing by and on the other side was machinery and workers.  Gack!  I kinda had to go :-(

Oh well, a splash of gas and we're back on the highway.  The police presence picked up the closer we got to Cairo proper.  I was happy about that as they were able to delay a lot of traffic until we got by.  At one checkpoint we had to crowd together to keep other traffic out of our group.  Unfortunately, one of our riders hit a pile of sand and went down.  In an attempt to avoid the down rider, another rider also went down.  Thankfully, both riders jumped right up, dusted off and climbed back on the scooters!  Oh thank goodness - so close to our finish and no real mishaps the entire trip, only a few lost mufflers and other mechanicals - but no people injuries and we certainly wanted that to last to the finish!

I pretty much had my eyes glued on the rider in front of me as we navigated through Cairo.  We had to ride in very close stagger formation and there simply wasn't much time to avoid any problems if one should occur.  I don't think I've ever been on such high alert, so aware of the situations surrounding me, so cognizant of other riders, road conditions, hazards and peripheral traffic.  I wasn't particularly tight or tense, just extremely aware of everything going on and there was a LOT going on.  And, we were near the end of our 500 kms after a long, warm, intense ride.

Finally, we exited off the freeway and onto surface roads where the police were even more helpful in getting us through traffic in one huge group.  After a checkpoint where Police dogs came through the ranks of scooters and motorcycles, we were allowed to go forward as one large group to the Pyramids. It was magical.  It was only our group as all other tourists had been sent out.  The press was there to capture our finish ride.  We were given very special status and allowed to ride around the back side of the Pyramids where tourists are not allowed. 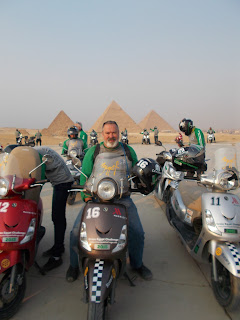 My honey, #16 was happy to complete the Cross Egypt Challenge. 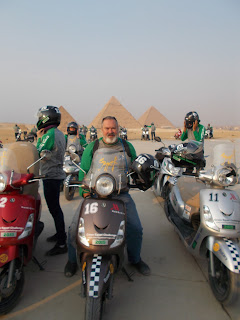 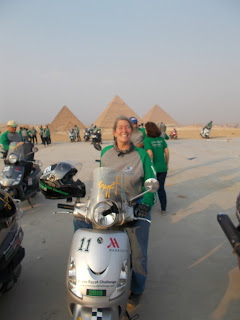 I'm all smiles as I realize we've reached the finish!  Nine days on a scooter crossing Egypt.  What an experience! 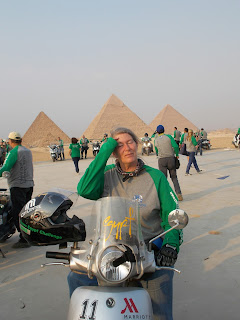 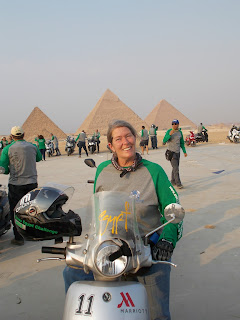 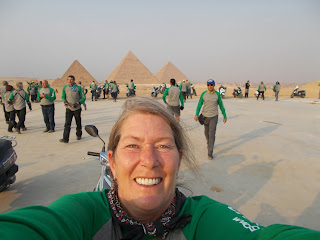 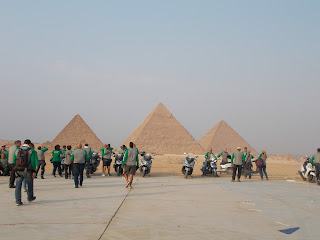 Everyone was excited.  Riding into the Pyramids as a group, we encountered some pavement, some sand, lots of rocks and more hazards to avoid. 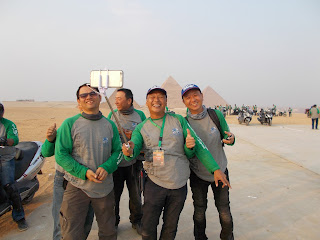 LOL, part of the Taiwanese group.  They were big on taking pictures and almost always laughing! 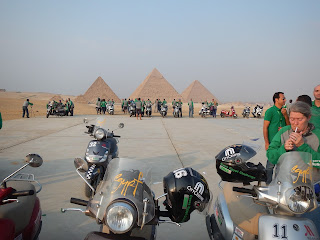 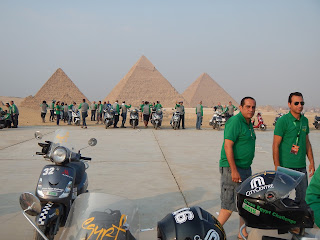 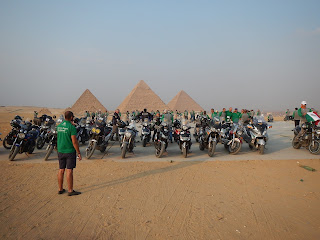 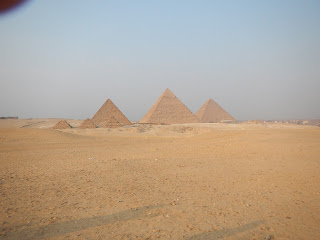 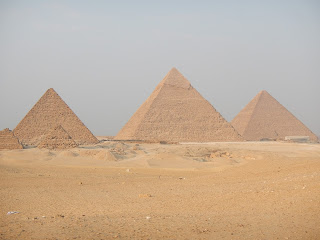 A view of the Pyramids very few get to experience personally.  It was truly an awesome feeling to ride to the back side.  The sun was low on the horizon and it would be dark shortly.  We made it just in time.  It was the pinnacle of our nine day Cross Egypt Challenge!  Hooray :-)

After our all too brief celebration at the Pyramids, it was back on the scooters to the finish hotel.  Again we had good police escort and managed to reach the finish hotel without incident.  We then had to get our scooters inspected for damage and turn in our keys before we were set loose.  We had no damage to report and once we were set free, we grabbed a cab and headed to the Cairo Marriott where we had stated this adventure days before.

It was a nice place to finish.  We did get a lot of very strange looks as we entered the lobby of this very fine hotel.  We were kind of stinky, definitely dusty and very tired.  Both wearing our green sleeves, toting our backpacks, helmets and pulling our wheeled carry-on bags, we were an odd looking pair for sure :-)  We quickly checked in and found our lovely room.  A quick shower and off to Harry's Bar for drinks and dinner completed our day.  Oh, that bed looked sooooooo inviting.

Off to dreamland only to be awakened by the shrill scream of the alarm at 4 am.  Yup, another early day but no scooters to ride.  Only a taxi ride to the airport where we caught our flight to Paris where we will spend a few days before the long slog home.

Stay tuned for the Paris installment :-)  Thanks so much for following along with us.  This has indeed been a great adventure.  When we get home, we'll post an Epilogue with more photos.  Until then...