This morning we got up fairly early (for me, not so much for Eric), geared up and headed out to Enterprise, UT where I had found a dirt route I wanted to check out.  It wasn't a long dirt ride, but it appeared to be a relatively easy, forest service type road.  I really want to get comfortable and up to some semblance of speed on this type of road.  So, I picked a route that would take us on dirt/gravel roads and end up on pavement.  We were going to go through Utah and into Nevada with the goal of brekkie/lunch in Caliente, NV.  Yippee....here we go!

We rode up UT 18 to Enterprise where we turned left and rode until the pavement stopped.  But, we didn't stop!  We kept on riding. Well, we stopped long enough to change the modes on our bikes.  I went from road mode to enduro pro (not that I'm a pro or anything).  I admit, I was SLOW at first, being cautious, and a bit intimidated.  As we rode along, I found my self going faster and faster  Our goal was to intersect NV 319 and ride into Panaca and then Caliente, NV for brekkie/lunch.  The gravel section to Caliente was only about 20 miles and all fairly smooth.  No panics along they way.  Sure, sometimes I went slower than Eric, but, heck, I'm not Eric :-)

For the most part, the road surface was great but every once in a while, just when you're getting all relaxed and thinking this isn't so tough, then BAM!  You hit deep sand or loose deep rocks!  Good wake up calls.

We stopped to take some pics at the Utah/Nevada border.  We both laughed at how shot up the signs were.  Some were simply not readable because of all the bullet holes!

A photo of Eric's bike at the Old Ebron Road.  We might find out one day if there is a New Hebron Road! 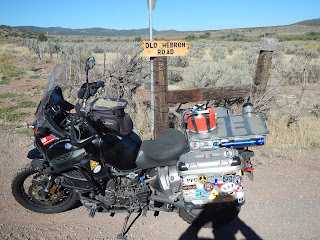 Here we are at the state border, 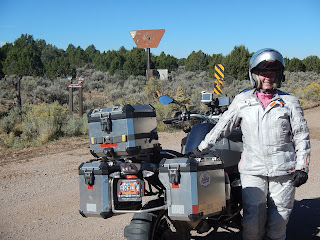 Some peeps just can't help themselves, I guess!  The sign is almost unreadable because of the bullet holes. 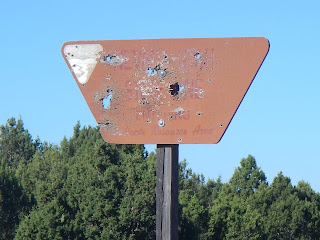 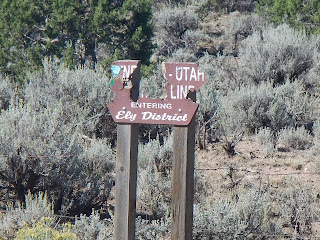 We had a nice little rest stop here at the state border. 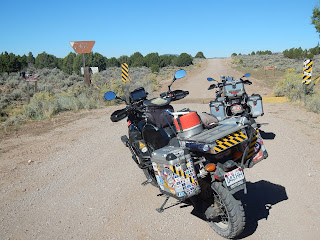 So, on we go.  Nothing but dirt as far as one can see.  Yup, this is definitely a dirty ride!  especially for me because I was riding behind Eric.  We tried to keep a good distance from each other but we still wanted to use our Sena units to communicate.  Needless to say, I got REALLY dirty ;-) 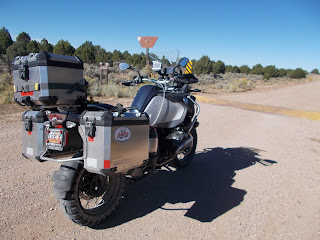 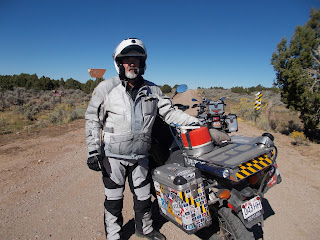 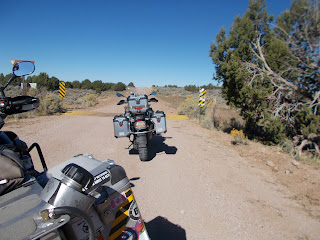 We found the Nevada portion of the road to be much rougher than the Utah section. Lots of surface changes and I finally realized I could go much faster if I stood on the pegs.  Now, I know this, but for some reason my pea brain didn't engage until we were about 12 miles into the dirt section.

After a 20 mile jaunt we exited the dirt road on NV 319 and rode pavement through Panaca and on to  Caliente for brekkie!  We usually eat at the Branding Iron in Caliente but thought we would try the Knotty Pine Restaurant for a change.  It had decent reviews so what the heck?  Not much for ambiance and decor but the food was decent. They also have a small cocktail lounge with slot machines.  We didn't partake in any gambling, just had our meal and discussed where to go next. 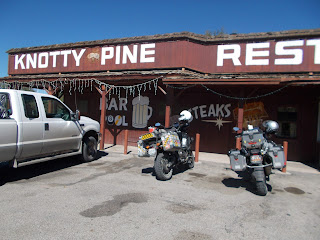 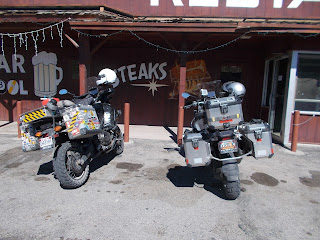 Eric plays a couple of different motorcycle "tag" games and he needed a visitor center photo.  We knew there was a visitor center up the road at Cathedral Gorge State Park (NV) so we backtracked and stopped at the visitor center which ended up being closed.  Oh well, we went ahead and rode into the park.  I'd never been there.  Been past it many, many times but never actually went into the park.  The road was paved for the most part and then maybe 1/4 to 1/2 mile of gravel/dirt. 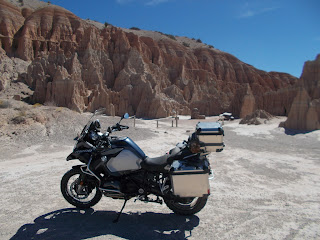 At the end of the road there are some awesome rock formations along with a covered picnic area. 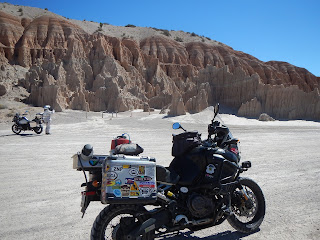 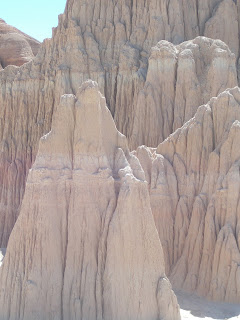 Before you reach the end of the road there is an old water tower that was built by the CCC in the 1930's.  It's pretty cool. 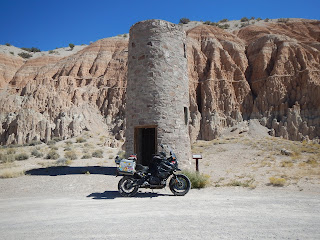 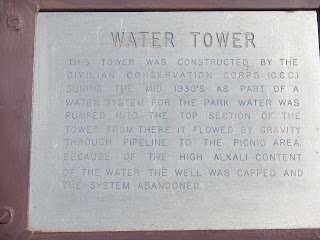 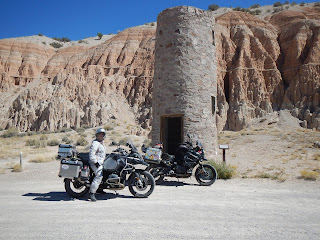 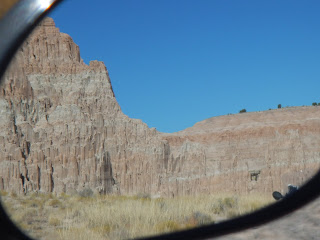 The road surface to Beaver Dam State Park started out really decent.  I was back up on the pegs and moving along nicely.  Actually, I was feeling a wee bit smug.  This wasn't so difficult!  My Beastie Bike just flew over the dirt, gravel and even the big patches of sand.  The sand made me nervous but I just looked ahead past the sand and my bike simply floated over it!  Hooray!!!!  Good thing I was going at a decent clip because I think that sand might have taken me down in a heartbeat :-)

We came to an intersection where we could turn left and eventually get on Crestline Rd. (the one we initially took) and back to Enterprise or we could go straight to Beaver Dam State Park.  Since the park was only another 5 miles, we decided, heck, let's go for it.  Hahahahahaha (famous last words - kind of like, here, hold my beer and watch this!). 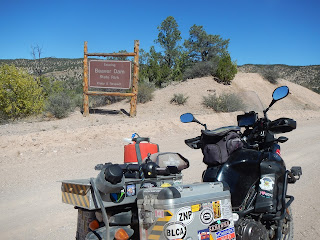 See how nice the road surface is?  I was already feeling confident and heck, only another five miles in and five back out.  No big deal, right? 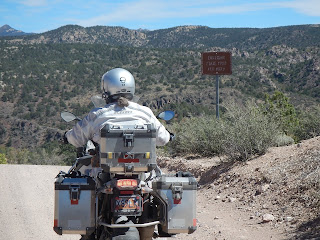 Wrong!!!!  The road went up and down and up and down and winding around and around and then....a rather steep, nasty, rough, big loose rock section with a very sharp turn at the bottom of the hill.  There was no line to take it was just ugly, sharp, nastiness!!!  Of course, no pictures.  It was all I could do to hang on.  As a matter of fact, halfway down I killed the Beastie Bike.  Oh no!!!!!

Crap, I managed to keep the bike upright but I was stopped and in 2nd gear with my left foot on the ground (tippy toe) and my right foot on the brake.  I suppose I could have just pulled in the clutch and started out in second gear but it was steep and scary and I just wanted to tractor down the hill and make the sharp turn at the bottom.  If I took off in 2nd, I was afraid I couldn't slow down enough to make the turn and I didn't want to FALL OVER!

I told Eric (who was around the corner and out of sight) what had happened and to give me a few minutes to sort things out.  Eventually, I put my right foot down and shifted into first gear, pulled in the clutch, started the bike and froze.  Heck darn.  I was just feeling so totally confident and then this!  Piss.  I quickly realized there was no way for me to turn around where I was and really had no choice but to go down that damn hill.  A few deep breaths, I slowly let out the clutch and picked up my feet.  As soon as I started to move, I stood on the pegs and just tractored down the hill and managed to get around the curve.  Whew!!!  I was sweating profusely!  Gack!  I HATE that stuff.

Fortunately, that was the worst of it and the rest of the road was pretty much okay.  At least I made it to the park!  We took a break here.  I really needed it after tackling that nasty downhill section.  While I had a smoke, Eric rode around the park a bit to see what is there. 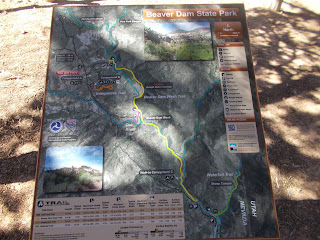 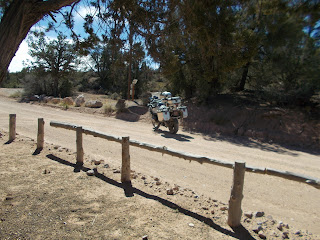 I see lots of dirt, lol. 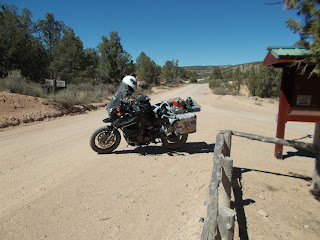 The weather was perfect, not too hot and no wind.  And we had the place all to ourselves. 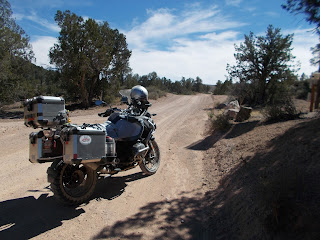 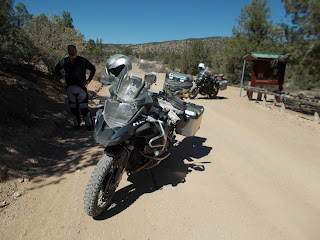 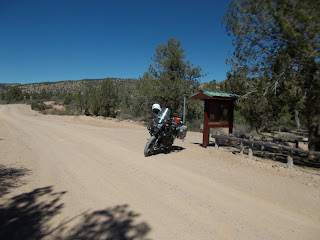 After resting up a bit we headed back out of the park.  Of course my mind was stuck on the nasty section.  I got around the curve and just looked where I wanted to go and my wonderful Beastie Bike took me right over that rough stuff like it was nothing.  Yippee!!!!   Hahaha, after that section, the rest of the road seemed like a highway.  Five miles out of the park we turned right toward Crestline.  They had just graded the intersection and part of it was very loose, big round rocks.  Damn, I did NOT want to ride on that.  So, much to Eric's dismay, I rocked and rolled my bike until I could turn sharper and miss most of it.  Yay!  Onwards!

We were riding along nicely and then, around a curve was a road grader and guess what?  It was grading the road.  There was a big berm of rocks and dirt right in the middle of the road.  Fortunately we were able to get past the grader by riding the left side of the road.  Then, around another curve, another grader!!!!  Did the same thing and waved as we passed.

We noticed the road surface improved once we got back into Utah.  On our start we had seen 3 wild horses and on our way back one of them literally jumped across the road.  Eric put on the binders!  Nobody got hurt :-)  It was actually pretty cool.  It's open range in this area and we ran into several herds of cattle but they were too intent on munching whatever they could find to bother with us.

Next thing we know, we're back on the pavement.  We pulled over so I could change the mode of my Beastie Bike to road from enduro pro.  It always makes me laugh out load.  When in enduro pro, I'm like a ballerina on my tippy toes and when I put it in road mode, it just settles down and I can flat foot again.  I think this will make me giggle every time for as long as I own this bike!

We rolled into Enterprise, UT for another quick break.  I spied these two bikes out front.  One from Idaho and one from Utah. 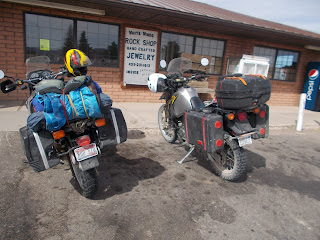 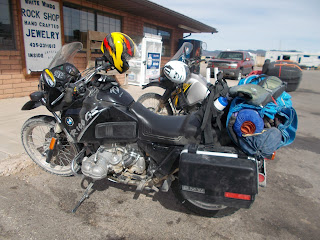 Jut another picture of my bike because I love it so much ;-) 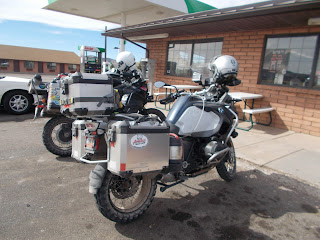 Our ride home was uneventful.  We both managed to get some tags for the games we are playing which was an unexpected bonus.  We had ridden about 70 miles of dirt/gravel and maybe 200 total miles.  When we got home, Eric took the air compressor and blew a good deal of dust and dirt off the bikes.  I'm afraid it's going to take more than that to be clean again.  Probably never will be clean again, hahahaha.  That's okay.  I'm sure I'll get caught in a rain storm eventually :-)

It was a great ride.  Beautiful weather and I had picked a great route that was challenging at times but not beyond my abilities.  This is exactly why I bought the Beastie Bike - so we can do some forest service type roads and expand our horizons.  I'll be planning more off pavement rides soon so stay tuned!

As always, thanks for following along.  More fun planned very soon!