Well, we both needed a ride.  A good, long ride.  Unfortunately time and money said we couldn't go to Stagecoach this year so we decided to ride to the Because We Can Ride To Eat in Orcutt, CA.  Now, Orcutt is only maybe 600 miles from home and yes, we could have done it in one day.  But, my butt isn't so iron anymore and we decided to take a few days getting there and coming back home.  Nice, no pressure and the weather forecast was sunny and cold.

It was a clear, beautiful morning today but a tad chilly at 27 degrees!  We decided to wait a few hours before we headed out on the bikes hoping the temperature would rise a few degrees.  Our destination for tonight was Barstow, CA, a mere 300 miles away so we weren't in any particular hurry.  I did, however, don my heated pants and jacket before mounting up!  I felt like the Michelin Tire Man or maybe the Pilsbury Dough Boy with all the gear I had on.  My base layer was LD Comfort tights and zipper top with Technik socks.  Then a layer of heater pants and jacket.  Finally, my Klim Altitude pants and jacket along with Sidi Adventure GoreTex boots.  I also added a buff around my neck and my warmest winter weight gloves.  Geez.....I could barely move about with all that stuff on!

I managed to climb onto the bike and pull on my new LS2 Metro helmet.  I used the buff to pull up over my chin and mouth to keep any drafts out.  Oh, I had also put a LS2's version of pinlock in my visor.  Guess I didn't get a good seal because it fogged up right away.  As soon as I got some speed it cleared up.  We'll fix that tonight when we stop.  The only issue I had was going slow it would fog.

So, finally, geared up, we were off on another adventure!!  Yippee, I love adventures :-)  Our first stop was a mere three miles down the road where we stopped to fill up our tanks.  The route was Old Highway 91.  Yeah, that highway where I got stopped a week or so ago by a County PoPo (no tickie!!).  The road was clear of ice and snow although we did ride for several miles above the snow line.  It got a bit chilly, too.  The low temperature was 34.5 degrees and at that point I turned on my heated gear.  It warmed up quickly and then........died.  Yeah, it died.

We pulled over in the metropolis of Beaver Dam, AZ along Old Highway 91.  We both suspected a fuse had been blown.  My honey found the bad fuse and fortunately, I had a good supply and choices so he found the replacement fuse he was looking for and we were set to get on the Interstate and move along! 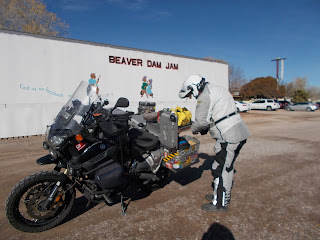 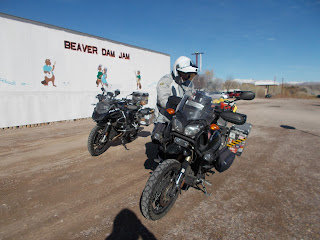 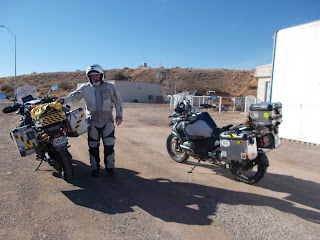 I turned on my heated gear and it worked just like it was supposed to!  Nice because it was a bit cold cruising at 75 mph with my bike thermometer showing temps in the low 40's.  We cruised south on I-15.  Traffic wasn't too bad and we made good time.  We debated stopping for brunch in Mesquite, NV, but we had just stopped 10 miles earlier in Beaver Dam and neither of us were ready for another stop so soon.  We motored on until North Las Vegas where we took the Speedway exit and rolled into the Petro Truck Stop which has an Iron Skillet restaurant.

We passed on the buffet and instead I ordered cinnamon roll french toast with scrambled eggs and crispy bacon.  YUMMY!  Eric opted for chicken fried steak fingers and fries.  Not an elegant place but the food was good, the service was quick and it didn't cost an arm and a leg. 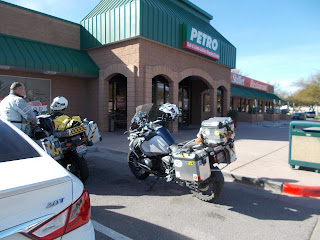 Well fed, fat and sassy we were back on I-15 south through Las Vegas.  We encountered a few slow downs but going through Vegas was easy peasy,  We got in the express lane and tootled along.  Everything was going just great and then......traffic pretty much came to a standstill......all three lanes on the south side of Las Vegas.  There were electronic signs warning of heavy holiday traffic and to expect delays.  Whew!

There was a minor accident and I suppose that was the initial reason for the backup of traffic.  It was really awful for about 15 miles.  Stop and go, stop and go, stop and go.  Ugh!  Then of course there were the jerks who were speeding up the shoulder.  At Primm, the interstate goes from 3 to 2 lanes and what a giant mess that was!  Oh well, the further south we went, the more the traffic sped up.  There were still a LOT of vehicles out there.  We only saw one other bike ;-) 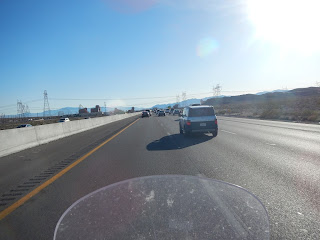 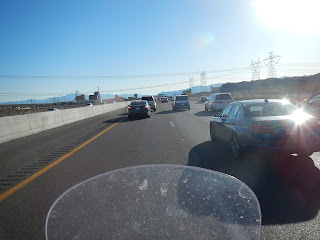 We made a pit stop at the first rest area in California.  It was packed!  The people you see in these photos are waiting in line to use the facilities.  Glad I didn't have to go.  Eric had to wait in line for a while.  I have never seen this rest stop so busy! 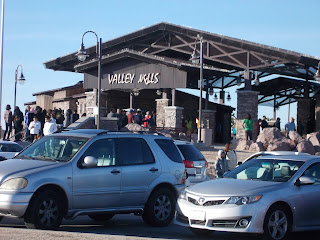 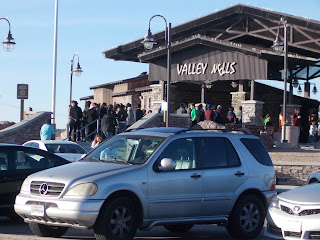 Then is was just slog along the Interstate to Barstow.  Of course, just a few miles before Barstow traffic again came to a stand still for no apparent reason this time.  We still had those jerks (we call 'em fucktards) who had to scream up the shoulder only to merge up the road and cause more delay.  Gack!  Now, my fuel light came on.  Hahahaha, I could see our exit ahead but we weren't getting there in a hurry!

Eventually, we got to our exit and our room for the night, the Super 8 at Barstow.  Not bad, not nice but totally okay and it comes with brekkie :-)  Tucked in, bikes covered and pizza just arrived.  More excitement tomorrow so stay tuned! 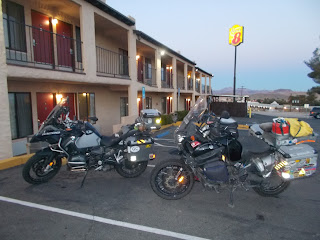