Following a good night sleep, we awoke to a dreary day!  Boohoo!  Oh well, it wasn't raining, just cloudy and a tad chilly.  After brekkie at the Best Western we geared up again with all the layers of LD Comfort, heated gear, outer gear, winter gloves, buff, etc. and headed to the ocean.  After all, it was only about 1/2 mile away and it's been a long time since I've been to the ocean so we had to go.  Geared up and bikes loaded, we left the hotel parking lot in search of a beach access.  It wasn't long before we found what we were looking for! 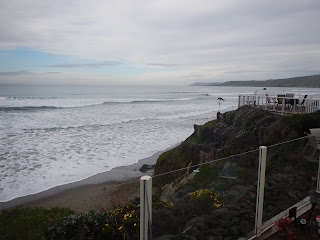 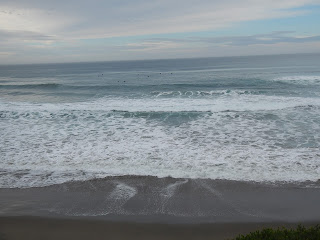 Those dots out there in the ocean are surfers!    Brrrrrrrrr!!! 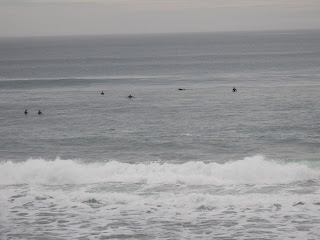 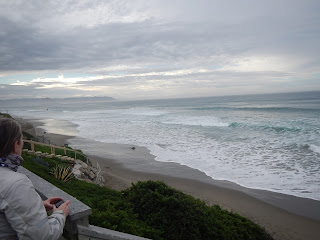 It was a beautiful beach in both directions. 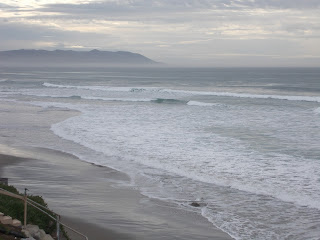 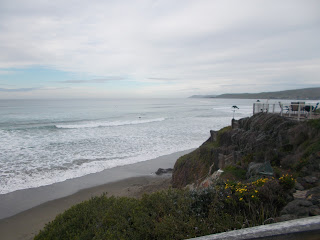 I watched this surfer catch a wave and ride it in! 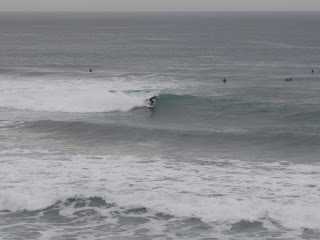 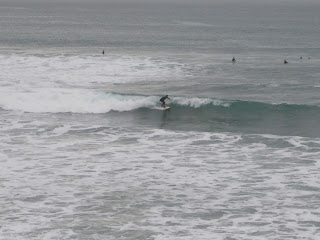 We climbed down the million or two stairs to go stand on the sand :-) 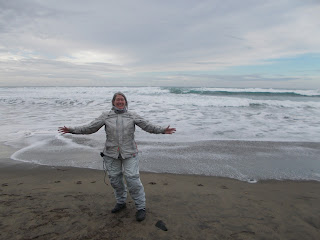 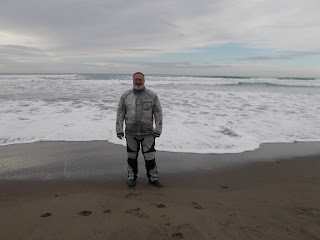 And, of course we had to memorialize our visit ;-) 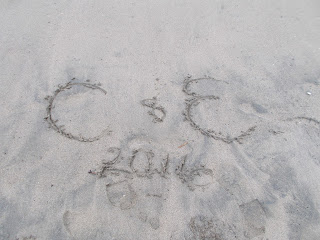 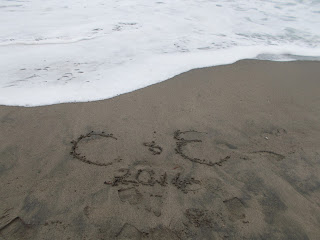 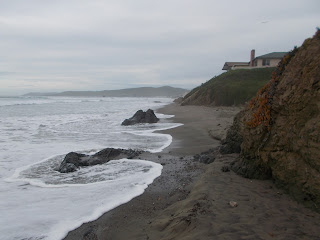 Then, we had to climb up the million or two steps to get back to the street where we had parked the bikes!  Oh, and I was dressed like the Michelin man, lol.

After our brief visit to the Pacific, we headed east on rural roads which was very pleasant as we had very little traffic to deal with.  California Hiway 58 was particularly fun with a lot of twists and turns and then roller coaster hills and valleys.  Whee!  I love it when you feel like you're catching air off the top of rise as you enter the downside.  Good fun!

When I think of CA Hiway 58, I usually think of the slog across the Mojave and it really isn't very interesting until you get to Tehachapi.  But the western side of CA Hiway 58 is fabulous!!!

We took a little break here - the middle of nowhere on CA Hiway 58 where there is a humongous solar ranch. 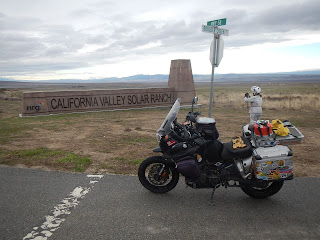 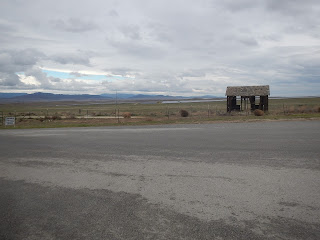 Big tumbleweeds!  I had one blow right behind me, so glad it didn't get me because it was about the size of a house.  You can see some of the solar panels in this photo. 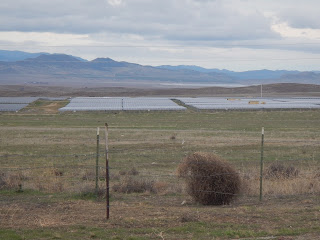 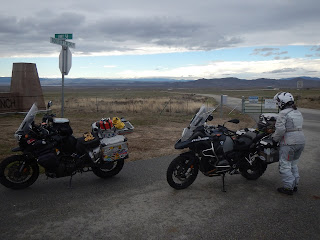 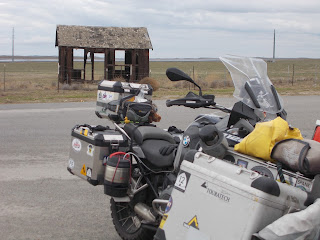 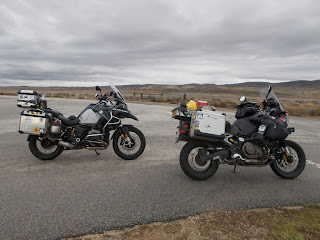 Yeah, another picture of my bike.  I can't get enough of this Beastie Bike!! 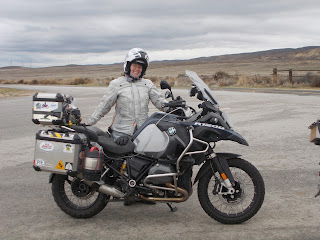 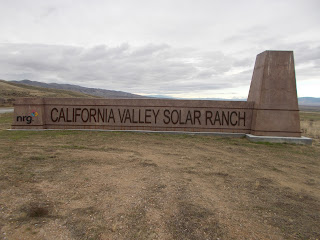 After riding through Bakersfield we started heading up the mountain to Tehachapi where we stopped at Denny's for lunch (only the best for us!).  While we were eating, a lot of clouds gathered and the fog got very thick, like pea soup.  The weather report was calling for snow in Tehachapi and neither of us wanted to spend the night there and risk being snowed in.  Besides it was still early afternoon.

So, after lunch, we bundled up again and headed out into the thick fog that now had freezing ice pellets pounding down.  It was nerve wracking!  My new LS2 Metro helmet has it's own proprietary pinlock type shield.  It was a piece of shit and didn't work at all.  That meant, I had to leave my visor up most of the way just to see.  GACK!  Fog, freezing ice balls, bad traffic.  This part was NOT fun.  I was thankful when we got over the summit and started heading down into the Mojave and the weather improved greatly.  I was also thankful for my heated pants, jacket and grips!

We were moving along quite nicely heading to Barstow when about 15 miles out of town, traffic came to a standstill.  Both lanes.  No movement.  Then we got to move like one car length, then another, then another.  Eric suggested we lane split.  Ummmm,  no thanks, not with the Beastie Bike and her big hips.  Besides, I've never really done it before and just the thought intimidated me.  (Actually, during the 2011 Iron Butt Rally, I did lane split in Pennsylvania on route to the checkpoint in Buffalo).  We even had a dude driving a motorhome tell us it was okay for us to lane split in California.  That was nice!

After several miles of this stop and go, the highway merged from two lanes to one lane and everything just became that much more congested.  We were getting some serious slow riding skill training!  Eric started to look for alternative routes on his GPS which pretty much meant off pavement.  I wasn't too sure about that.  I was tired and really didn't want to go exploring.  I was ready for my cocktail and a hotel room.  The motorhome guy told us traffic was clearing up about 5 miles up the road at the intersection of Hiway 58 and Hiway 395, so we just stuck it out.  It took a LOOOOOONNNNNGGGGGG time to get to Barstow.

Although our route today was just over 300 miles it took us hours and hours and hours because of the traffic jam.  This meant it was dark when we got to Barstow.  Ever since I had Lasik eye surgery, my night vision sucks and I was having a tough time merging onto the Interstate with all the traffic and brake lights and stop and go on the Interstate!  Yuck!  We took the first exit into Barstow, pulled over at a Chevron station, refueled the bikes and parked while we searched for a hotel.

The Super 8 where we had stayed a few days prior was already booked up.  Too bad, because it was a decent room, spacious and clean.  Eric was able to book us a cheap room at the Days Inn.  I've found that just like Super 8, it can either be a gem or a shady place.  Unfortunately, this Days Inn was on the shady side.  No, really it was awful, tiny room and filthy.  Gross.  Yuck.  Do Not Stay here, ever!  Don't let the somewhat tidy exterior fool you.  This is a nasty place.  Oh well, I was happy we were parked for the night and I could finally have my cocktail and relax.

The next morning dawned with blue skies and more chill.  I snapped a few photos before we departed again wrapped up in all our heated gear. 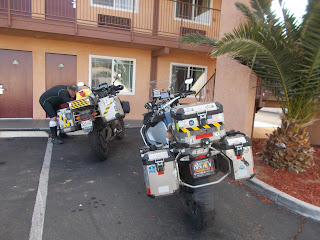 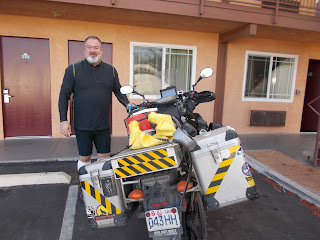 It was about another 300 miles to home and it's straight down Interstate 15.  Traffic was much better on our way home than it had been on our way to Orcutt, CA.  There were no lines at the rest stop :-) 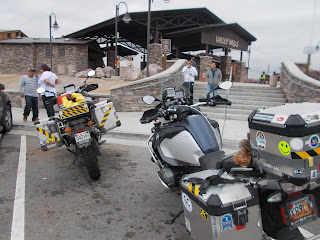 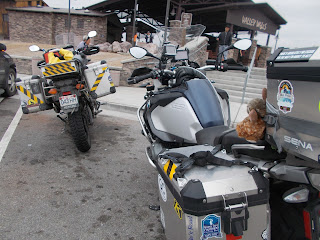 It was nice to roll into our driveway that afternoon.  We had a great little ride and got to visit with friends we hadn't seen in quite some time.  Our "Because We Can" lunch was great and popping over to the ocean was a highlight.  The western side of CA Highway 58 was spectacular (go ride this highway!) and we didn't have to deal with any issues other than bad weather at Tehachapi and that ugly traffic jam.  Our bikes performed flawlessly and I managed to stay toasty with my heated gear.

Thanks for following along.  It was nice to take a little trip in the middle of winter.  We have a Baja California, Mexico trip planned next month so stay tuned!