So Many Places To Go!

Last Saturday we awoke early, like before dawn early, got on the bikes and headed down Old Highway 91 to I-15 south to Las Vegas.  It was time for Beastie Bike to get her 12,000 mile service.  Actually we were about 1,500 miles overdue.  Since the weather has been cold and snowy and well it's winter so going north for service was really not an option.  So south we went to Las Vegas BMW Motorrad.  Some of you may recall that in years past I have had horrible experiences with the Las Vegas dealer and refused to ever go back there.  Life has a way of changing things, we have recently heard good things about the Las Vegas dealer and service department, thus off we went.

Sorry, absolutely no photos taken :-(  My bad.  However, the service department and sales department peeps were wonderful to work with.  I didn't need my oil changed or the final drive oil changed.  Eric can do those things at home.  Mostly we wanted the overall check everything and the valves checked.  The guys at Vegas were happy to accommodate us and charged us appropriately.

Since we were the first appointment of the day, it was only 9 am and no place to go.  We hung around the showroom for a while and walked over to a restaurant that used to be there but wasn't any longer.  So back to the showroom where Gary (sales & customer support) offered to drive us to an eatery.  Awesome!  That's what we did.  Gary drove us to a place called The Cracked Egg.  OMG, it was freaking delish!!!!  I had their version of a Monte Cristo with hashbrowns and I was in heaven.  Eric had their Chicken Fried Steak and he appeared to be very satisfied as well.  Not only was the food great, the service was stellar and our food arrived quickly and piping hot.  Just the way it should!

After that huge meal, we decided that maybe a walk back to the dealership might be a smart thing.  Fortunately, although it was chilly, the sun was shining and we had no problem getting back to the dealer.  We still had a bit of a wait during which time Eric managed to snag a great pair of Klim waterproof gloves and some Rok Straps.  LOL, he needed the Rok Straps because someone who keeps their GS in our garage stole all of his!

Not too much longer and the Beastie Bike was ready to go.  Miller, the service manager went over all the details of the service and was simply pleasant and easy to deal with.  I am changing my opinion of Las Vegas BMW Motorrad and I will go back there again if and when the need arises.  Seems like the ownership got the message and changed things up about 2 years ago - for the better.  They have even more exciting news, they will be moving to a new, much, much larger location and will be renamed to Eurocycles of Las Vegas, Las Vegas BMW.  In addition to BMW, they will carry Triumph, Vespa, Piaggio, Artic Cat, Aprilla, Moto Guzzi and MV Agusta!  They will also move their Eagle Rider Rental and Tour group to the new location. I'm sure it will be awesome!

Now that Beastie Bike has had her service and Eric's Yamaha Super Tenere has had it's service and valve adjustment, we are ready to start planning rides for this year.  So, the other night Eric and I were discussing where we might want to go on a riding holiday and it seems the options are endless, unfortunately time and money are not.

We do have camping gear and I suspect this year we'll be doing a fair amount of motorcycle camping to save a few bucks and to try different events.  In February, we have a trip planned for Baja California, Mexico.  We won't be camping on this trip but honestly, the hotels were pretty inexpensive (hoping they are decent!).  Lots of tour companies do this trip in February and I'm pretty sure we'll be seeing lots of folks riding down there!  As of right now though, our leader has been called to jury duty.  It remains to be seen if we actually do this trip or not.  I'm on the side of hell yes, let's go!  Even if we go by ourselves.  Heck, lots of folks do it so it can't be that difficult ;-)  Keep your fingers crossed that we can make this happen and I'll reward you with a blog full of photos!

As of yet, we have nothing scheduled for March.  But April looks promising with us attending the  Rawhyde Adventure Days in Southern California.  We will definitely be camping at this event.  Check it out and come join us!  Looks like it will have a lot to offer.

May is still empty as of today, however we're looking at the BMW Club of Northern California 49'er event over Memorial Day Weekend.  49'er Rally 2017.  Not the type of event or rally we have done in the past but it certainly looks appealing.  The price is right and you can camp right there.  We'll see how things shake out for May but this event is on the short list.

June is another month with nothing particular scheduled.  However, July just gets plain CRAZY!! The GS Giants are hosting the  GS Giant Gypsy Tour 2017 - Snake River Ramble.  This starts just outside Idaho Falls, ID with camping, games, riding, food and more on July 9th.  Right on the heels of the GS Giant Gypsy Tour is the BMW MOA National Rally which is held in Salt Lake City, UT this year on July 13 through July 16.  You can read more about it here BMW MOA Rally 2017.

Whew!  If that isn't enough, we signed up for another new to us event being held in Nakusp, British Columbia, Canada.  It's the Horizon's Unlimited Mountain Madness event (HUMM).  I've been wanting to get up to Nakusp for several years and here is a perfect opportunity for us to head that direction.  HUMM.  Check it out! Starting July 28 through 30 with a fews days on each end for travel to the event.  An LD type scavenger hunt on motorcycles in the dirt in the mountains with bear spray a requirement!  Yeah, hahahaha, that's gonna be fun for sure!  When we registered, we had to pick a team name so for now, we are the "F Bombs" ;-)  It may change to Team DFF, we'll see......  Anyway, take a step outside of your comfort zone and join us!

Now, with all of that happening in July, we still haven't figured out what we want to do about the Iron Butt Rally.  We know the start and finish is somewhere in Minneapolis, MN and we'd really like to participate and/or attend the start, finish and/or checkpoint.  We'll see if we can work that into our plans when more news is announced.

The rest of the year is still open and who knows what might come up!  I'm excited to try some new to me events and go to some new places.  Heck, I'm just excited we'll be getting some decent riding in this summer!  Hopefully, I will improve my off pavement riding skills and not end up doing this again. 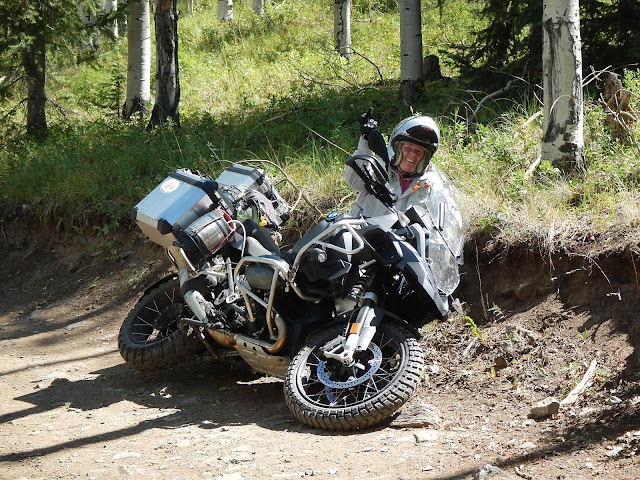 That's about all I have to report for now folks.  Thanks, as always, for following along.  I suspect when this current storm passes, we'll have a chance to get out do some day rides in the area and I'll be taking photos and posting blogs.