What a great night sleep!  I so didn't want to get up, put on stinky riding gear and hop on the bike.  We stayed in Challis, ID at a motel called the Holiday Lodge Motel.  Only 10 rooms which are being rehabbed.  We got a king room that also had a microwave and fridge along with a coffee maker and lovely linens.  Yup, I slept well. 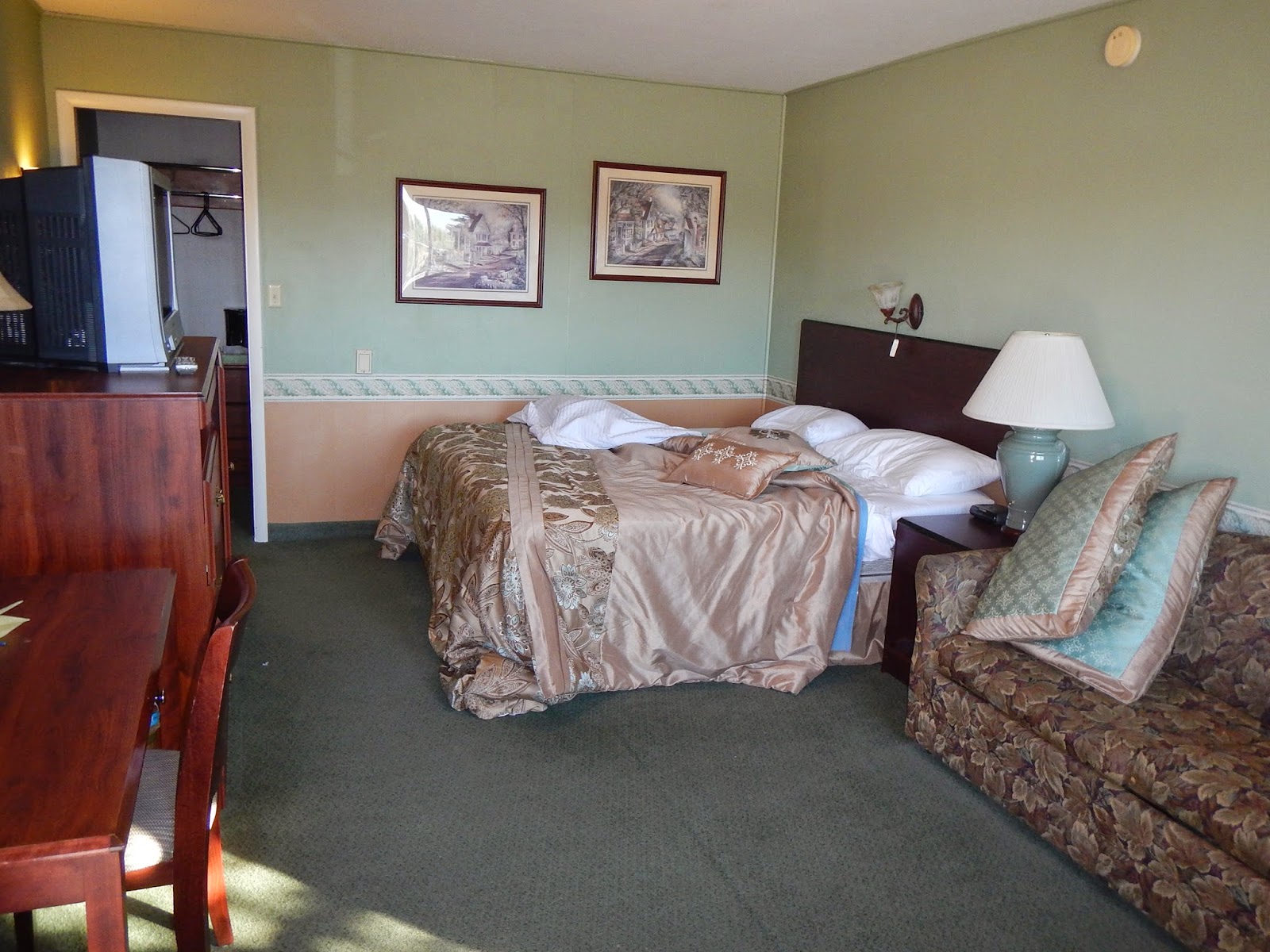 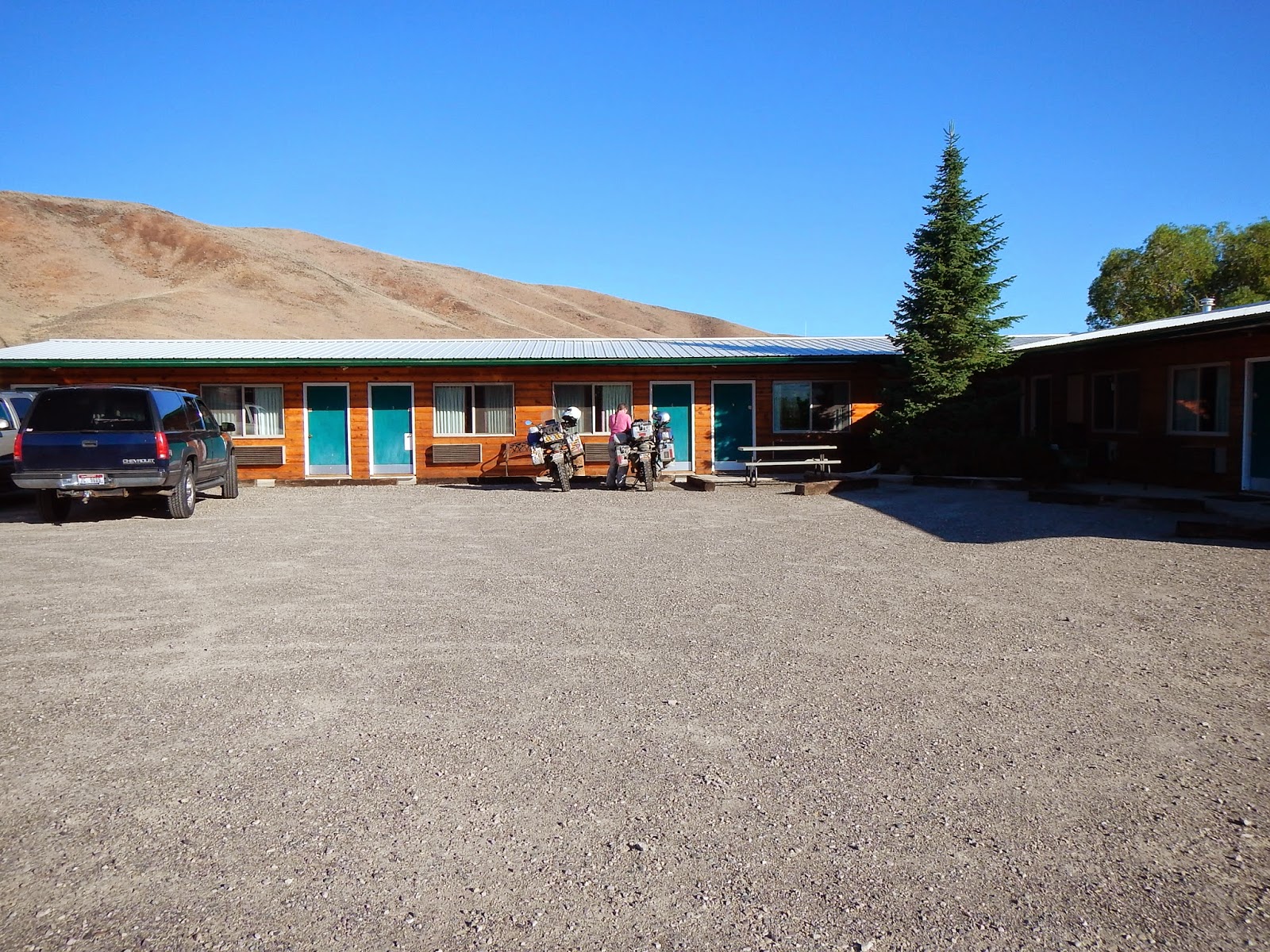 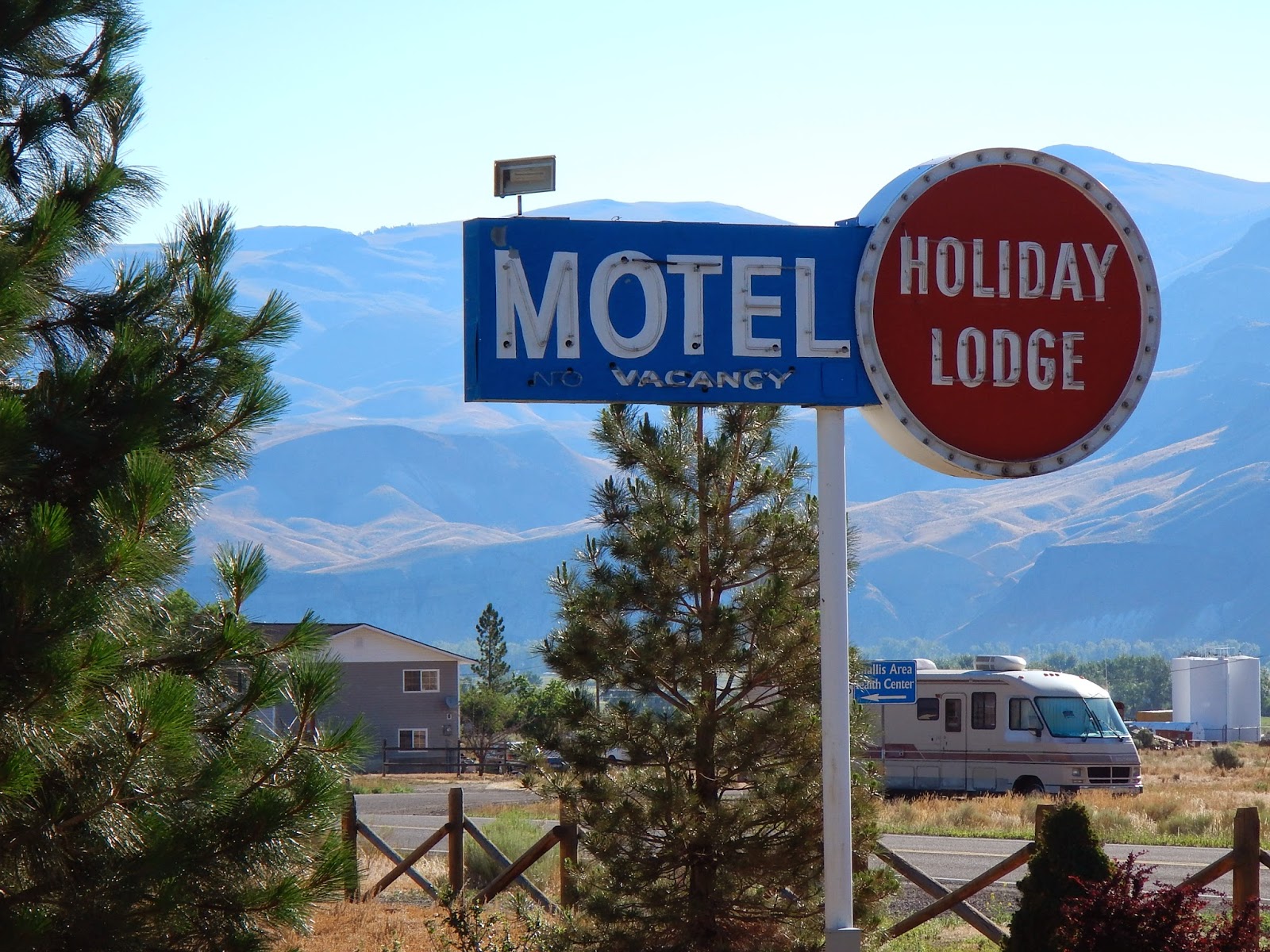 We finally rolled out of the parking lot shortly after 8 am and headed south on Hiway 93.  Of course, just out of town, the deer were out in droves.  Fortunately, none decided to be suicidal and we just motored past them.  The scenery became arid with not much but brown sage to look at. 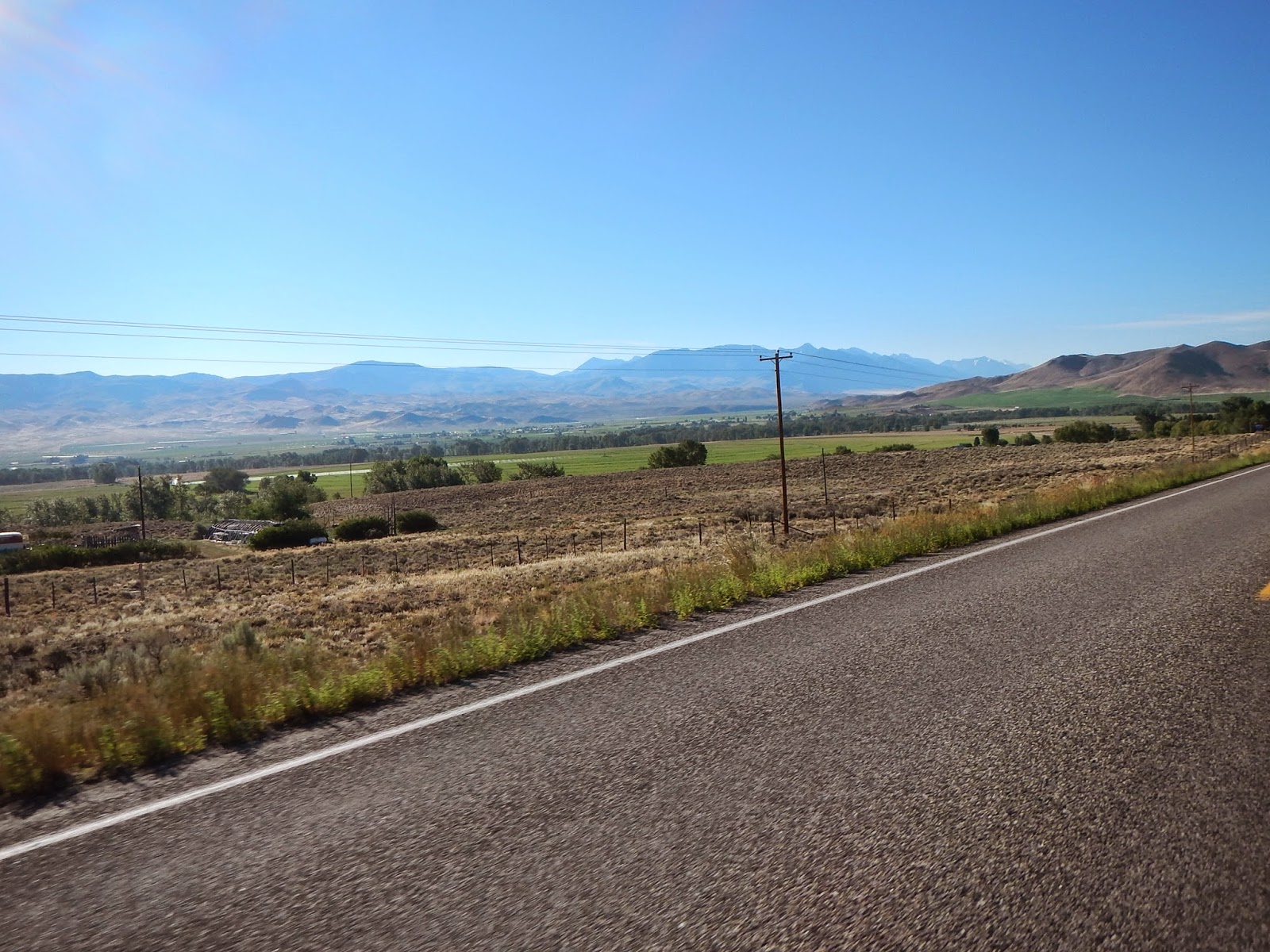 Oh, we also had cows on the road to dodge.  Fortunately, we were adept at dodging :-)

I giggled as we rode along Hiway 93 as we went to several bonus locations on that stretch of road when riding The Good, The Bad & The Ugly rally in 2011.

We stopped in Arco, ID for brekkie. I couldn't resist taking pictures of the giant rocking chair in front of Pickle's Place (where we had breakfast).  Silly fun! 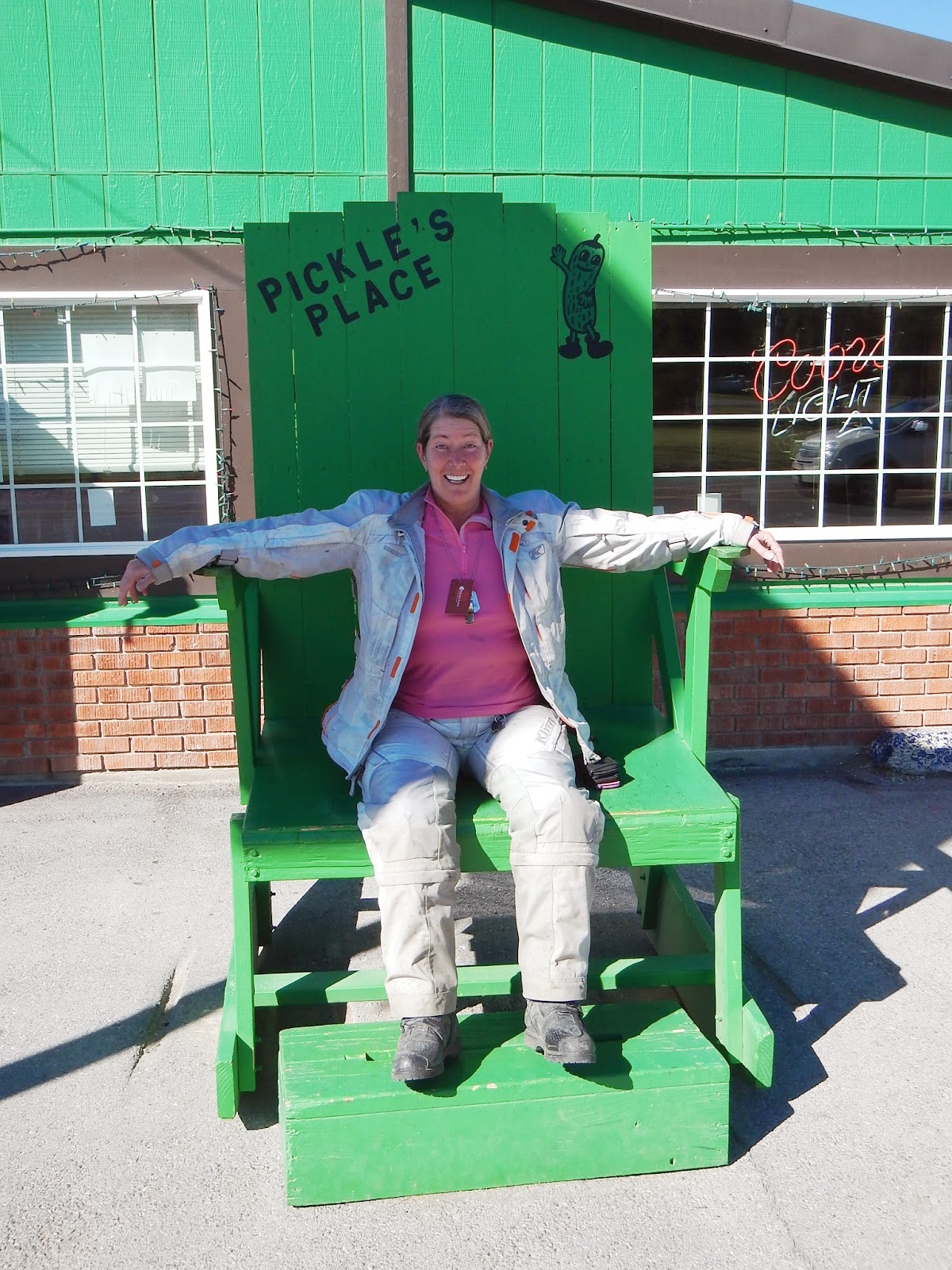 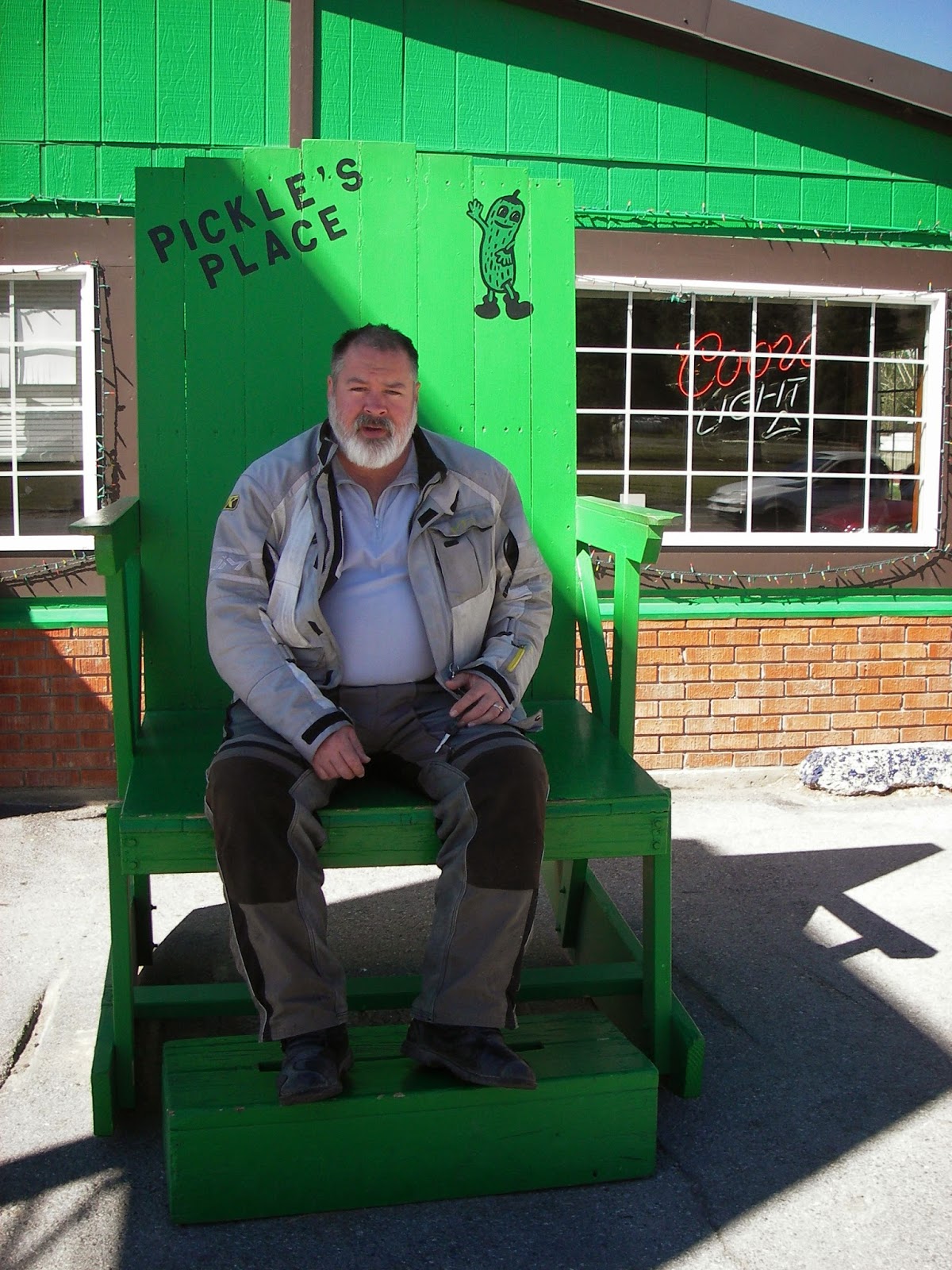 After a fine meal, we fueled up the bikes and continued on our way to I-15.  Yes, the Interstate.  We hadn't been on an interstate in almost 4 weeks but it was the quickest way home and we both have work waiting for us.

The rest of the day wasn't very exciting unless you count the crazy, stupid cagers.  We got on I-15 just before Blackfoot, ID and slogged our way south.  The temperatures began to rise.  When we left Challis it was in the high 60's and just went up from there.

We made a pit stop at a rest stop where we wet down our LD comfort tops and opened vents in our gear to get some airflow.  We were conscious to drink plenty of water.

Man did it get HOT.  For the past month I've pretty much been wearing my heated jacket liner (and turning it on!) and my heated grips.  Not today.  The high temp I saw on my bike thermometer was 103.  Fortunately my bike behaved and didn't overheat.

We made another pit stop just north of Salt Lake and then back on the Interstate.  Our timing was good and we missed any rush hour traffic.  We stopped again in Santiquin to fuel up and cool down.  While fueling the aux cell, I slipped and the gas nozzle came out of the cell and sprayed gas!  Yikes!!!!  I quickly released the lever and shoved the nozzle back in the cell.  Dang, I've never done that before.  It was a clear sign that I was tired.  The droning down the freeway in the high heat had taken it's toll and I was done.  Stick a fork in me done.

We decided to call it a day in Nephi which was only about 20 miles from our fuel stop.  We pulled into the Best Western where we've stayed before.  A nice motel.  It made me laugh to only pay $85 for a king room with microwave, fridge, desk, table, coffee maker, and more.  A very large, spacious, well appointed room.  After what we were paying up north, this was almost a joke!  A good one, though :-)

So, here we are, 250 miles from home and all tucked into a nice room at the Nephi Best Western.  Our wonderful, epic adventure is quickly coming to a close.  I look at our bikes and our gear and think, geez, we brought a lot of our trip home with us in the way of dirt, grime and  bugs!!!  Disgusting is how I would categorize our bikes and gear.  I'll be posting pictures in the next few days before we clean up all our stuff :-)

So, that's it for today.  Just mostly a slog down the superslab.  More of the same tomorrow.  As we go south, I'm sure the temperatures will increase.  It could get interesting!

Thanks for following our adventure!
Cletha
Posted by Cletha at 6:04 PM