Heck, it's over and time to head towards home.  I woke up kind of early, like 7:30 or so and dinked around for a hour before I hoofed it over to Bruno's for brekkie.  Quite a few folks had already departed, headed for home or other adventures.  However, there was still a good size contingent of folks having food at Bruno's.  I took my time eating and visiting and finally went back to the motel to pack up my belongings, load the bike and head out.

A bunch of folks had already left, some in the early morning hours as they had a big ride ahead to get home and ready for the work week.  As you can see, it was raining again!  Everything was wet, ick! 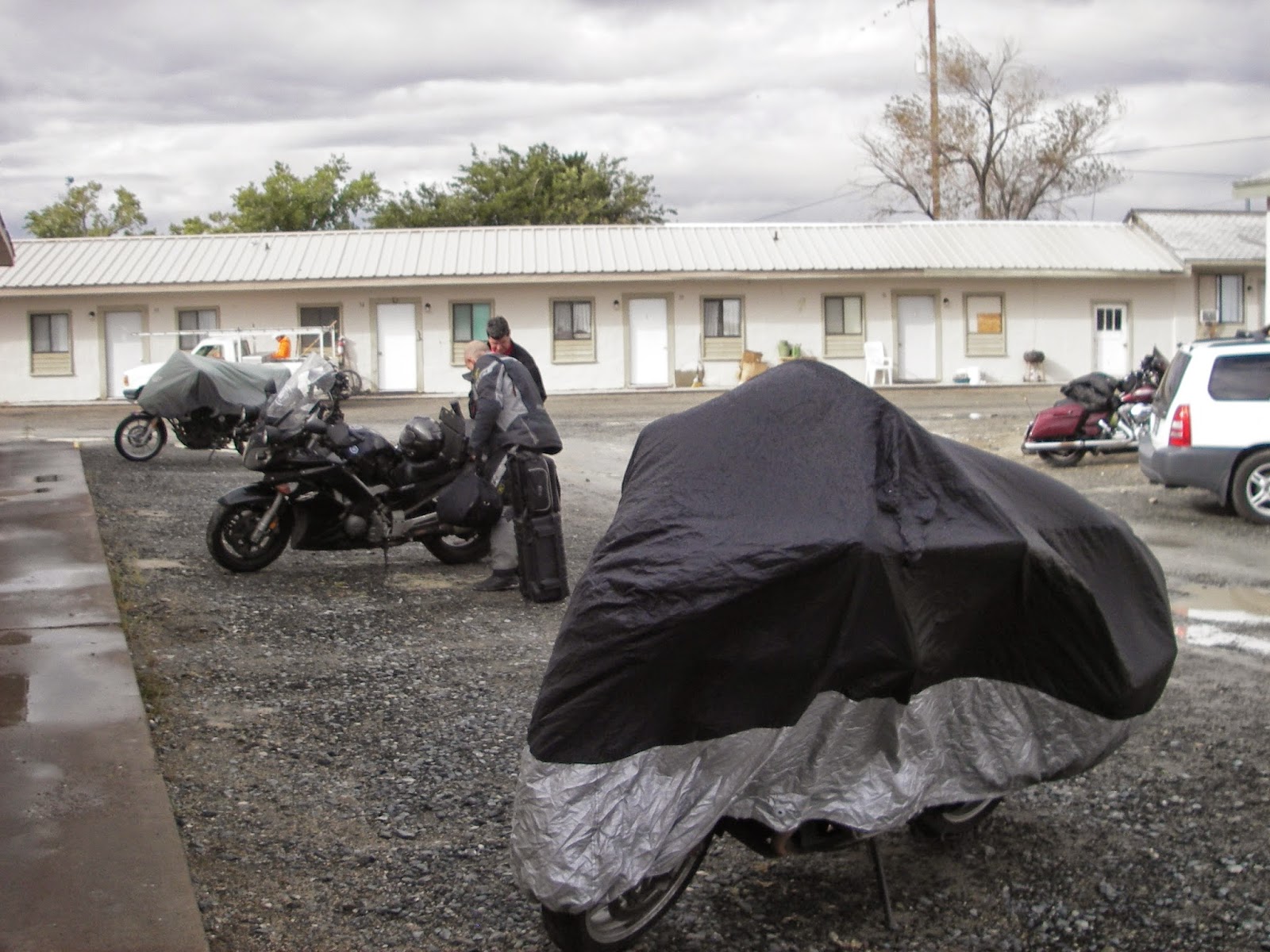 The parking lot was thinning out quickly. 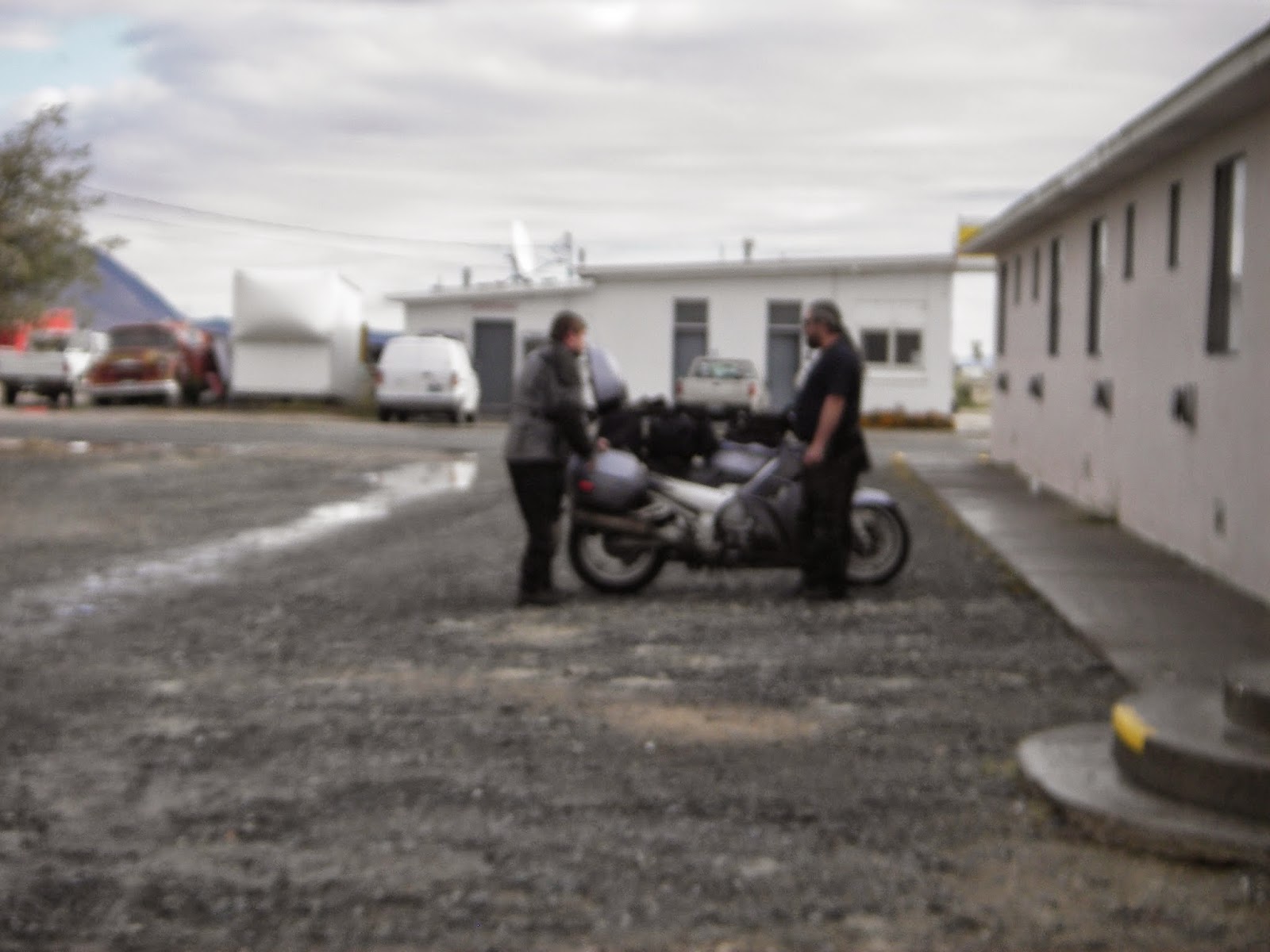 A few pictures of the left over carnage from the smoothie porch! 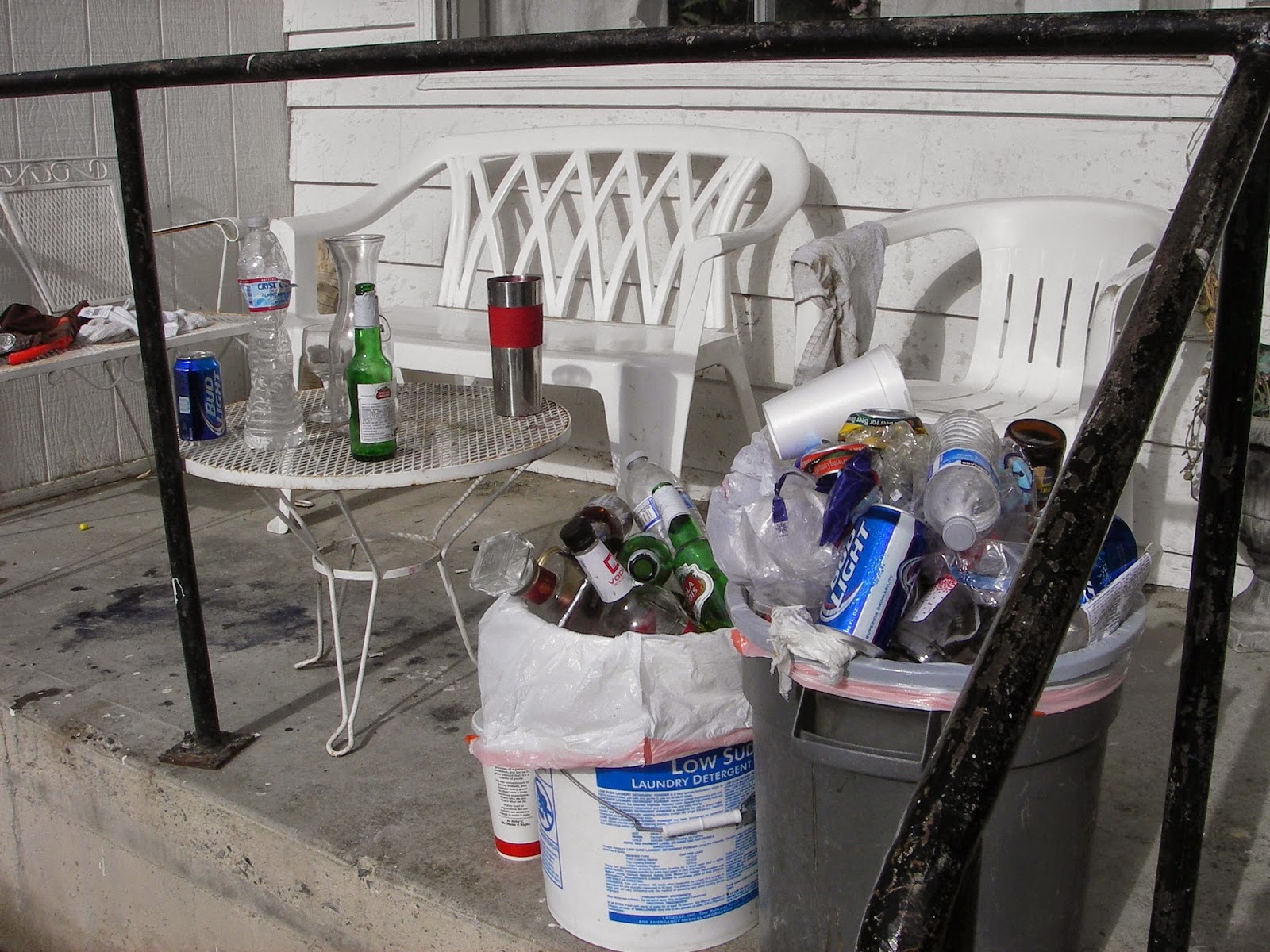 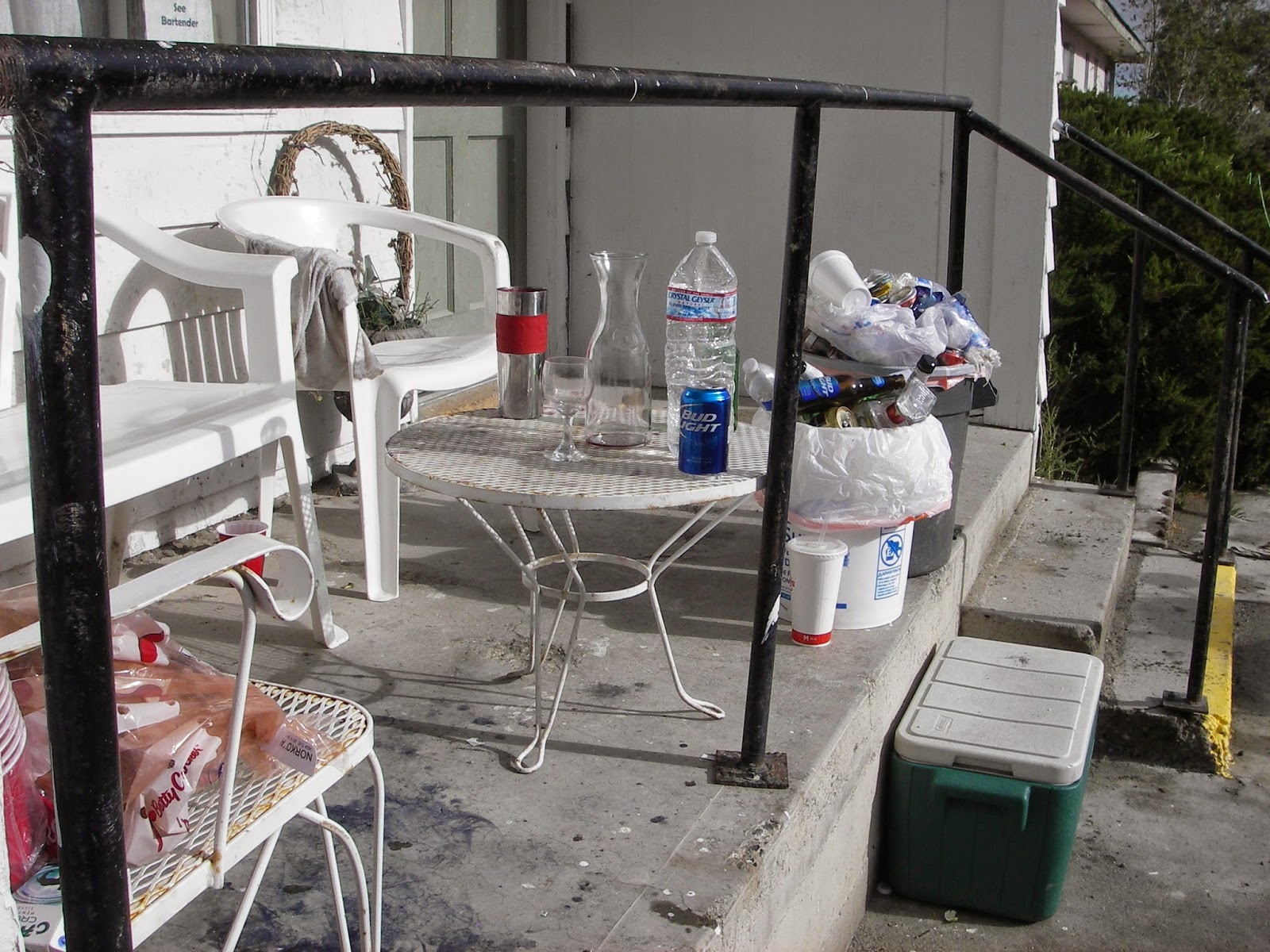 Only a few bikes left. 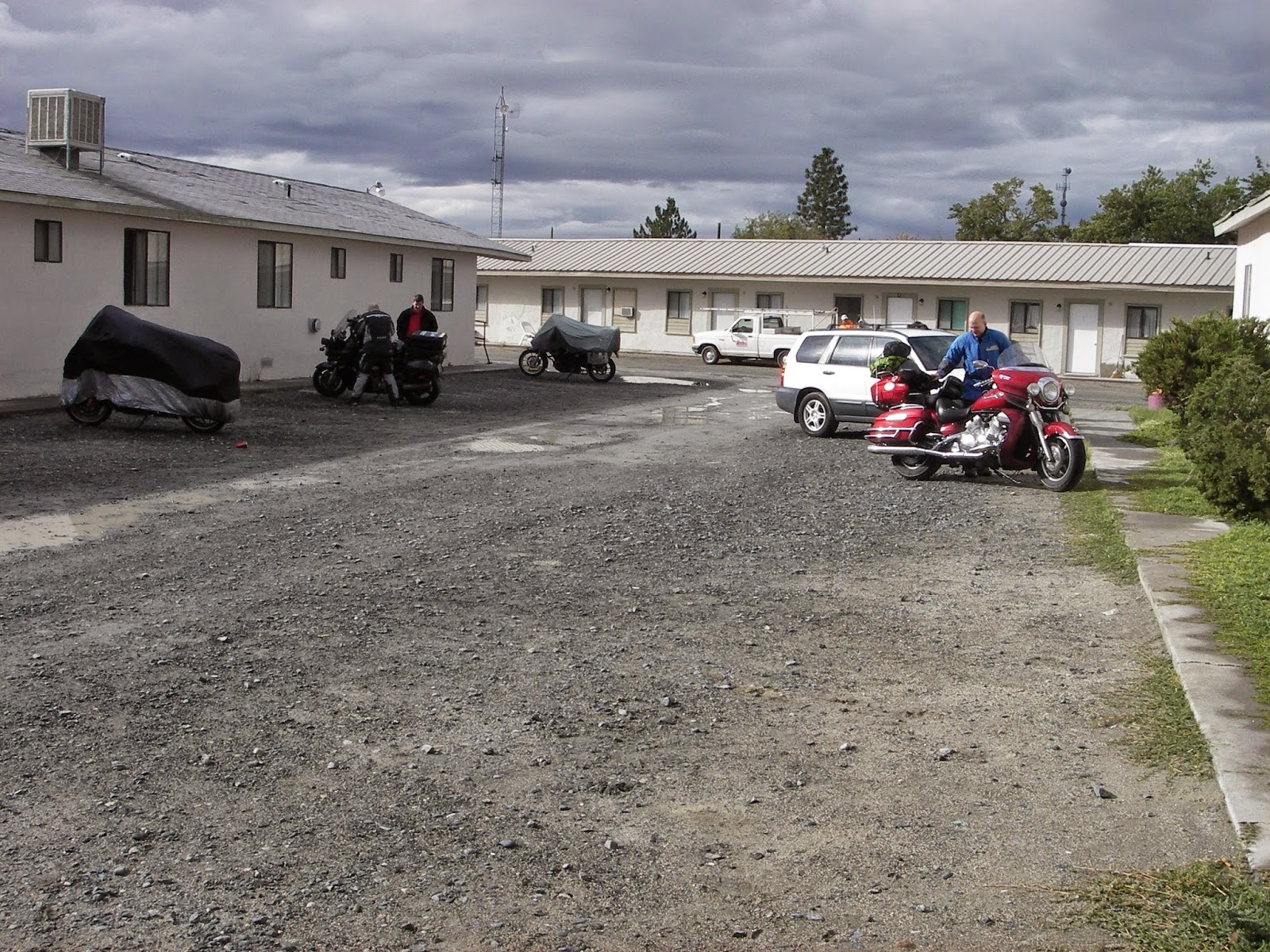 For once, for once, for once, I wasn't the LAST BIKE to leave.  I was second to last :-)  I beat Mario Winkleman by a few minutes :-)  The sky way grey and heavy but it wasn't raining when I left.  Ha, that wouldn't last long.  Within 10 minutes of my departure, I hit some rain squalls.  Good thing I was prepared and had the right gear on.  Well, I didn't have my Pinlock visor on but I corrected that soon enough!

I rode along Hiway 447 in solitude.  All was good.  I pulled into the Love's Station at Fernly to gas up and who do I find?  Chris Purney, Doug Barrett and Justin Phillipson.  All were kind enough to give me the salute :-)  We hung out a bit chatting and I took off, headed toward home.  Chris and Doug were going to ride together for a bit before splitting off in opposite directions.  Justin was headed the same way as I, but I took off, telling Justin that I knew he would pass me in no time since I wouldn't ride near as fast as he! 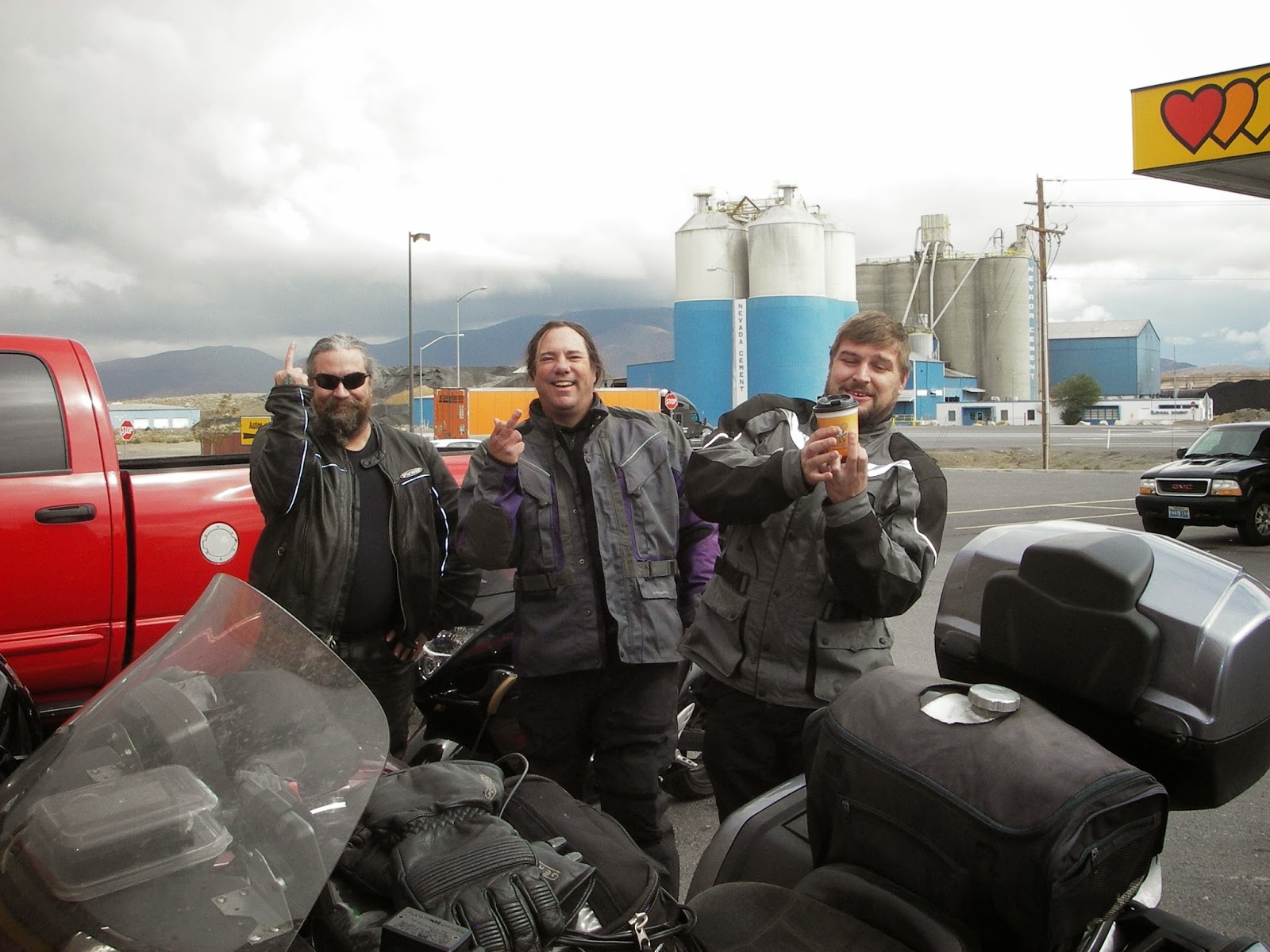 I headed out on Highway 50, returning the way home on the same route I took out to Gerlach.  I rode in and out of weather squalls and was happy I had waterproof gear on as well as my heated gear.  It was COLD and WET.

I chased Justin for a while along with another couple two up on a GS.  We made good time. We all stopped at Austin, NV and chatted.  The GS couple were not a part of Gerlachfest but were a great couple to meet.  Adventure riders, I let them be my rabbit :-)  They left first, then me, then Justin.  I never saw the GS couple again and Justin passed me somewhere after Austin and I never saw him again. 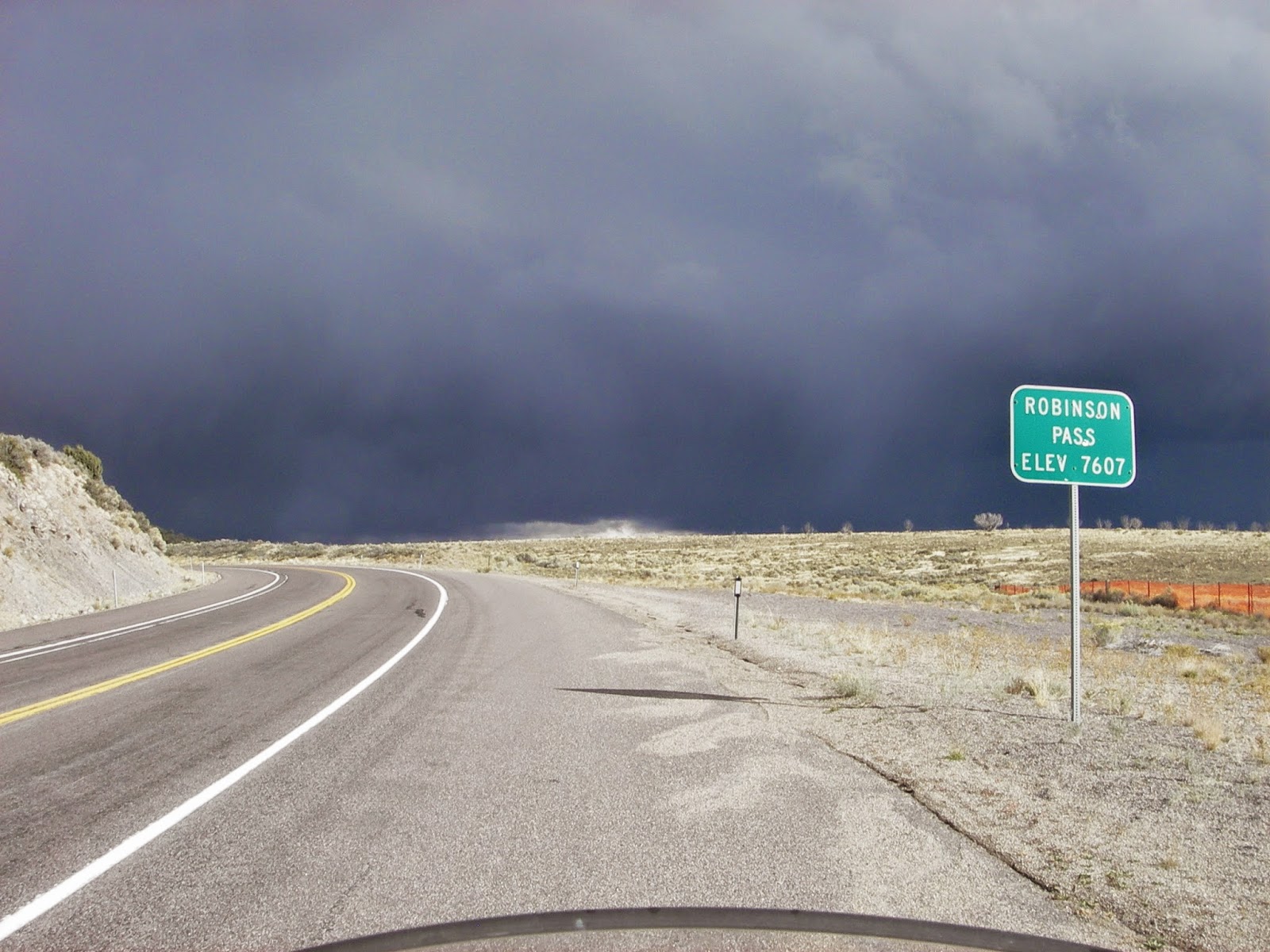 As mentioned, I had been riding in and out of squalls of rain and hail and nasty weather.  A bit of wind, but nothing like the wind I had on the way to Gerlach.  Anyway, the weather kind of sucked.  I had my heated jacket and hand grips on most of the time.  No, all of the time!  By the way, hail hurts. 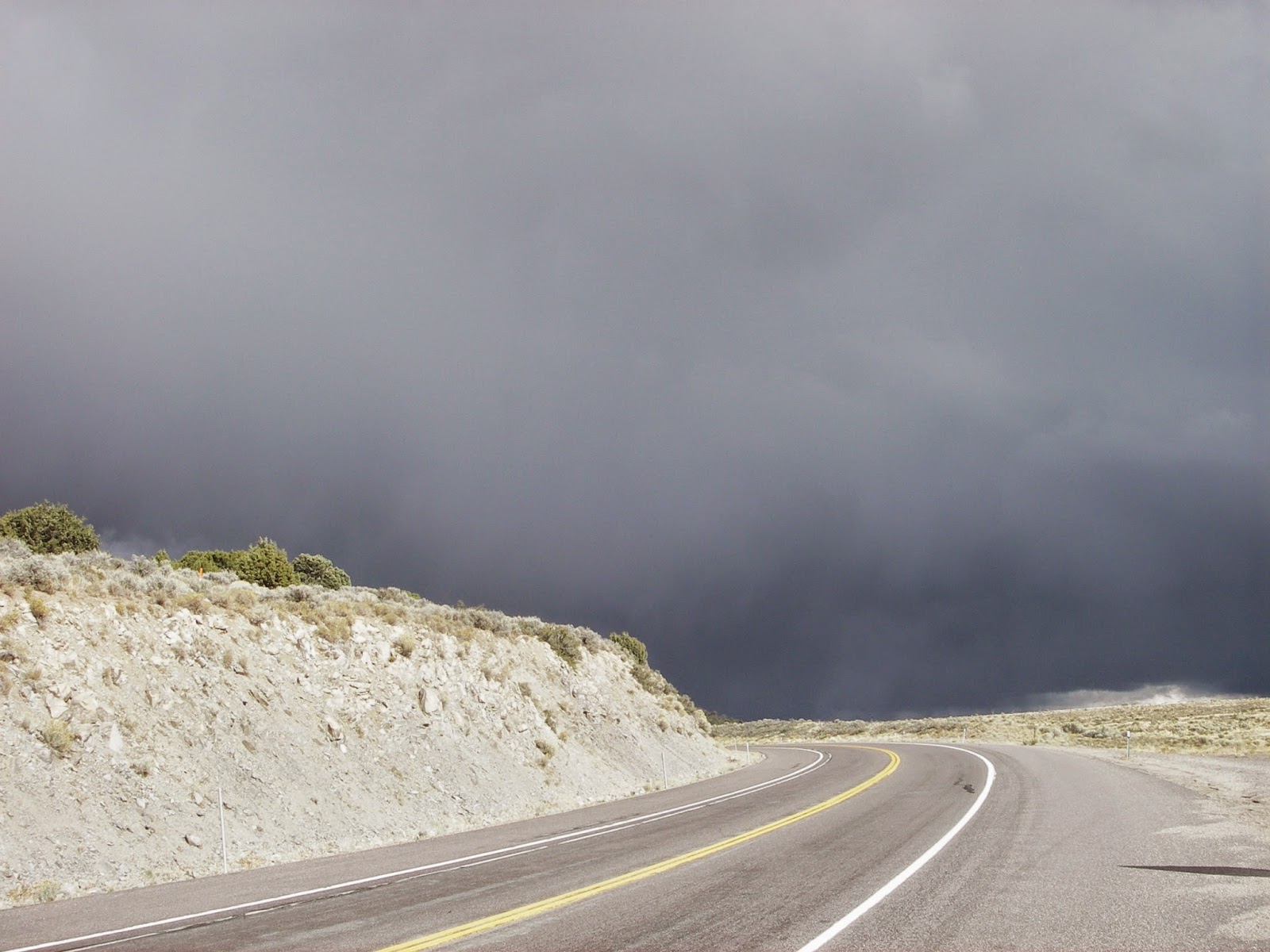 I'm like 12 miles from Ely, NV, my destination for the day and I see this huge storm wall.  I didn't stop to take more pics but it looked like funnel clouds were forming.  HECK, I'm only 12 miles to my destination.....12 miles.....

I motored on.  What else could I do?  There is absolutely nothing out here, no cover available, nothing.  Lightening strikes, cold, and then....yup, it hailed, rained and got extremely cold.  My temperature gauge on the bike started flashing - below freezing - bad - bad - bad! 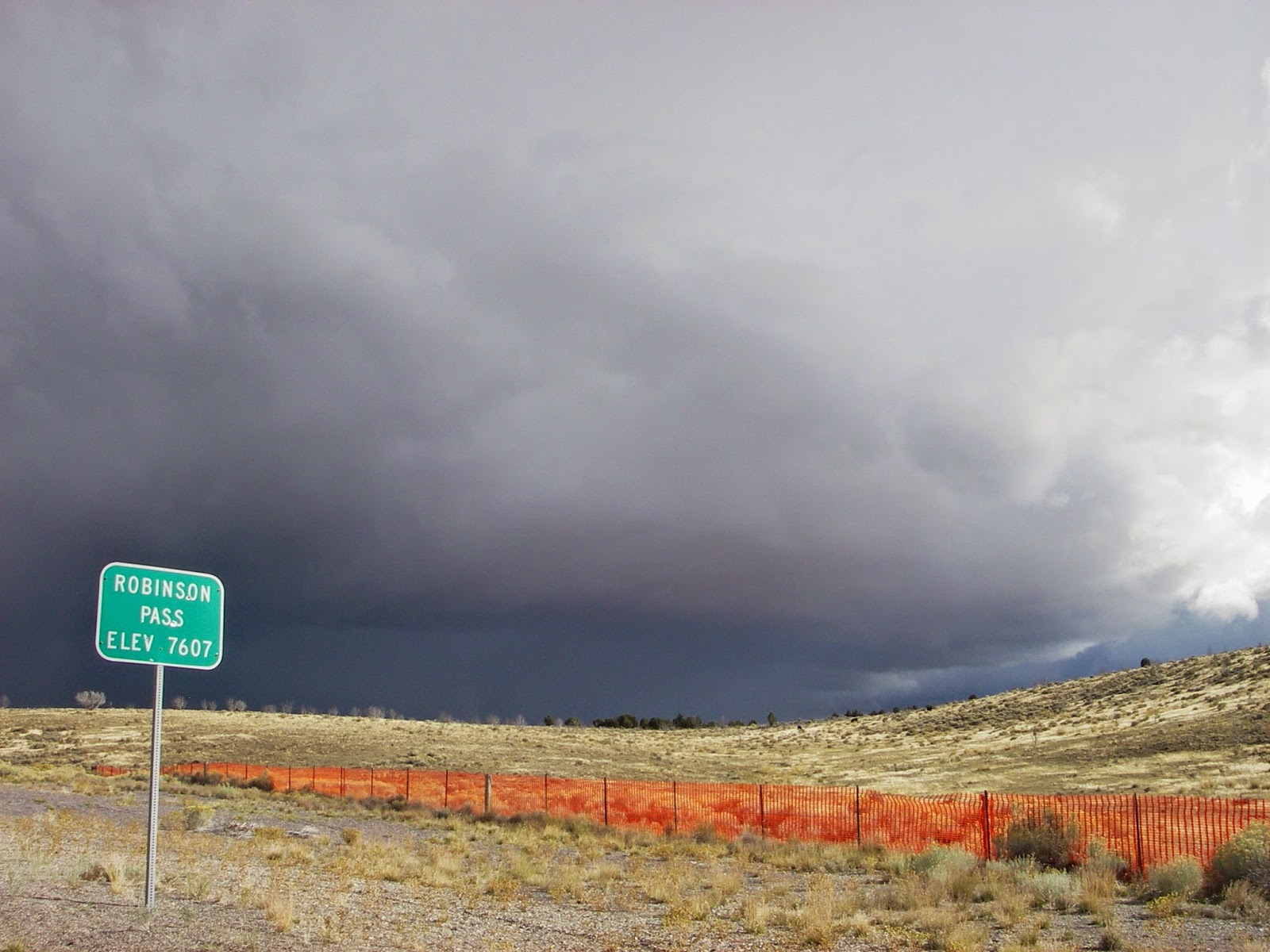 There was nothing to do but continue towards Ely.  I kept watching my GPS telling me how many miles to my destination.  I was moving along at a good clip but finally the weather forced me to slow down.  It was then I noticed something hitting my feet.  Huh?  What could that be?  It was frickin slush!!!!  My feet were getting pounded by heavy, wet slush from the highway.  Yikes!

I was so close, yet so far away.  The road was covered in slush and there was nowhere to go but forward.  It was freezing, frightening and not even a little bit fun.  I was so close - the GPS now said 5.5 miles, then 4.5 miles, then 3.5 miles and still there was slush and freezing temperatures.  Would I make it?  Nowhere to take cover.  Nowhere to stop and wait it out.  Darn, it was not a good situation.

I concentrated on staying in the tire tracks to avoid as much of the slush as possible.  It almost got to a point where I considered putting on my flashers, but there was no other traffic so why bother?  Heck, I really didn't want the bike to slide out from under me.  So close to my destination.....yet so far.

Funny, I never felt panicked.  I recognized the dire situation, but remained calm.  Guess that's why I managed to get through it.  I was so relieved to see only wet pavement with no slush only a mile or so out of Ely.  Yay!!!!  I will make it and be safe.  And, that's what happened.  I rolled into Ely and in particular to the Four Sevens Motel (a Cognoscente fav) without issue.

I got checked in and started unloading my bike.  As I unloaded, who should show up?  Ha, you'll never, ever guess.  It was Mr. Bob Higdon, Gerlachfest attendee and rider extraordinaire.  I had passed him miles before and we each gave a wave.  I had no idea we both had the same destination in mind :-)  Fortunately, we both made it through the horrible slush mess and arrived safely.

So, that my friends, is my story of the day.  Tomorrow, I will finish my ride home.  It's not far, maybe 200 miles or so. The forecast is for improved weather and I anticipate no issues.  I'm looking forward to getting home to my honey although I had a great time riding to Gerlach, visiting with friends, watching Virgins firewalk, remembering riders who have passed and making lifetime memories.

Thanks for following along with me.  Cheers to all of you who follow my blog.  Stay tuned, I have some exciting new stuff maybe happening soon!