As soon as I awoke, I peeked out the window to see what weather surprises might be in store for me today.  Hooray, light clouds, no rain and no wind.  I dilly dallied about fixing a cup of coffee, checking email, packing up my belongings and loading the bike.  It was a pleasant morning.  Finally, I got geared up and hopped on the bike.  Rut roh......nothing happened when I hit the starter button.  Hmmmmm.....I checked to be sure the kill switch wasn't on and tried again, still nothing.  Crap.

There was a small group of motorcyclists at the other end of the motel parking lot, so I walked over to them and asked for some help trouble shooting.  I was certainly getting power - all the lights came on and the voltmeter showed 13.7.  We chatted for a bit and one of the guys asked me if it was in gear.  DOH!!!!!  When I parked the night before, I put the bike in gear because I was parked on a pretty good slope.  Headslap!  Back to the bike, click it into neutral and voila' she started right up.  Hahahaha, simply had to laugh at myself.  I don't know why I didn't even think to pull in the clutch or check the gear I was in.  Guess because I almost always leave it in neutral when I park.  Lesson learned and very fortunately it was an easy lesson :-)

So, finally on the road for home.  I filled the gas tank and aux tank then headed out of town.  I was so pleased the sky was friendly.  I did have my heated liner on and the heated grips as it was only about 50 degrees or so.  I had a beautiful ride.  Little to no traffic.  Stopping when I wanted.  No critters, no weather issues, no bike issues.  Only thing missing was my music but I'll get that sorted out soon.  I took these pictures about 80 miles out of Ely on Highway 93.  Just wanted to show you the difference a day can make in the weather! 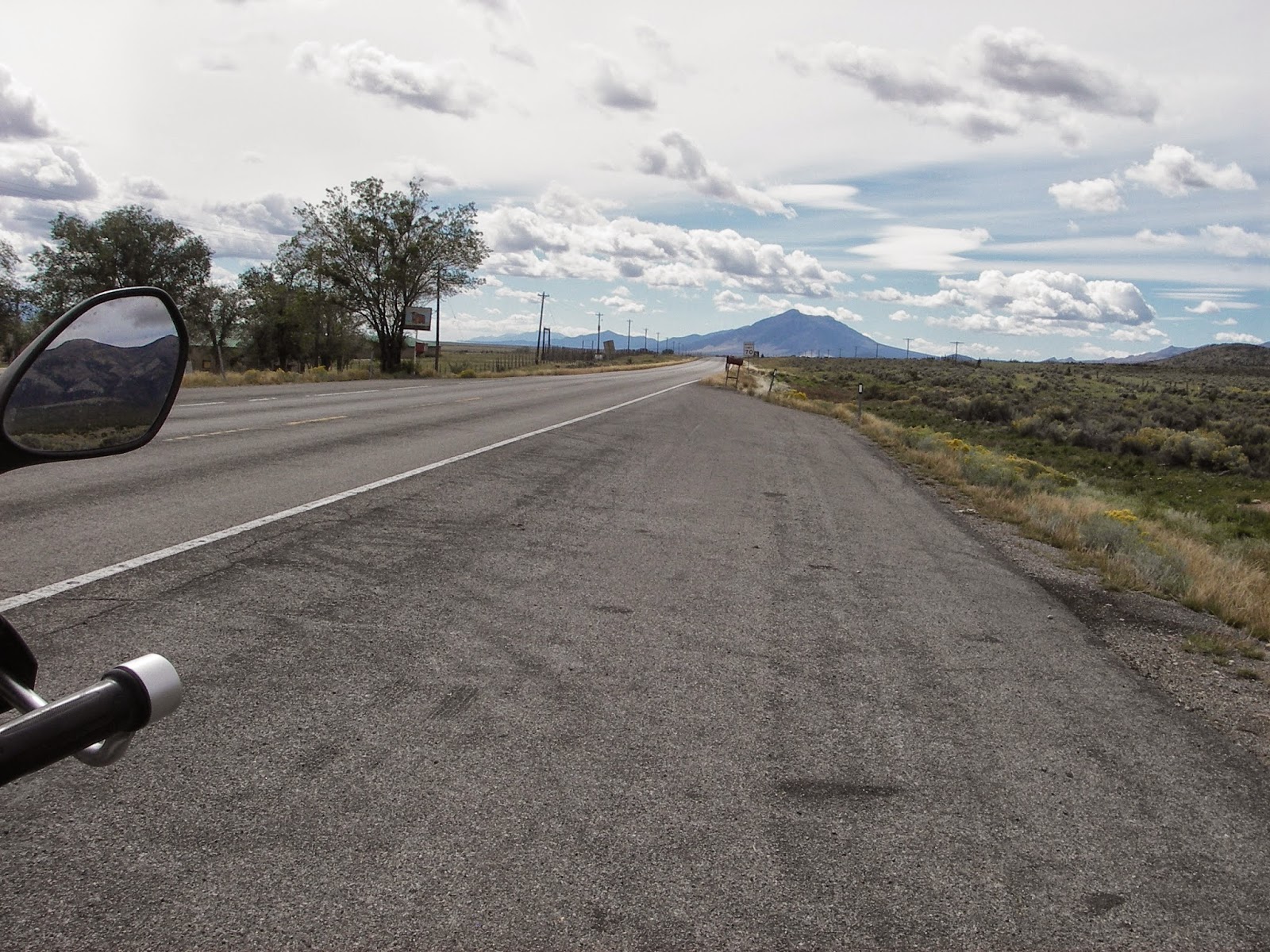 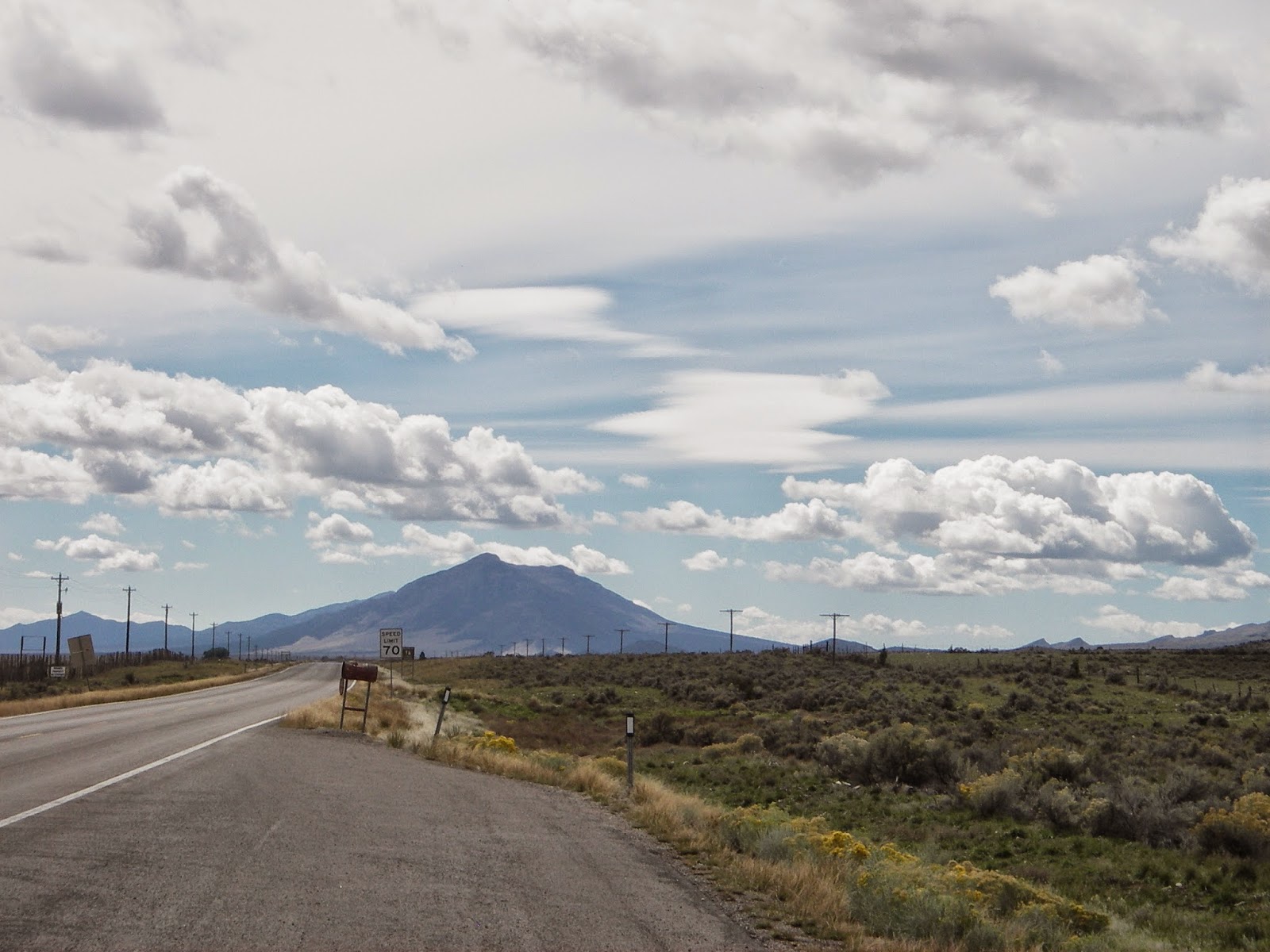 I motored along on Highway 93 headed south.  I was getting hungry but didn't feel like stopping in Pioche, NV so continued on to Panaca.  Well, the options are sparse in Panaca so this was my late lunch from the Shell service station :-) 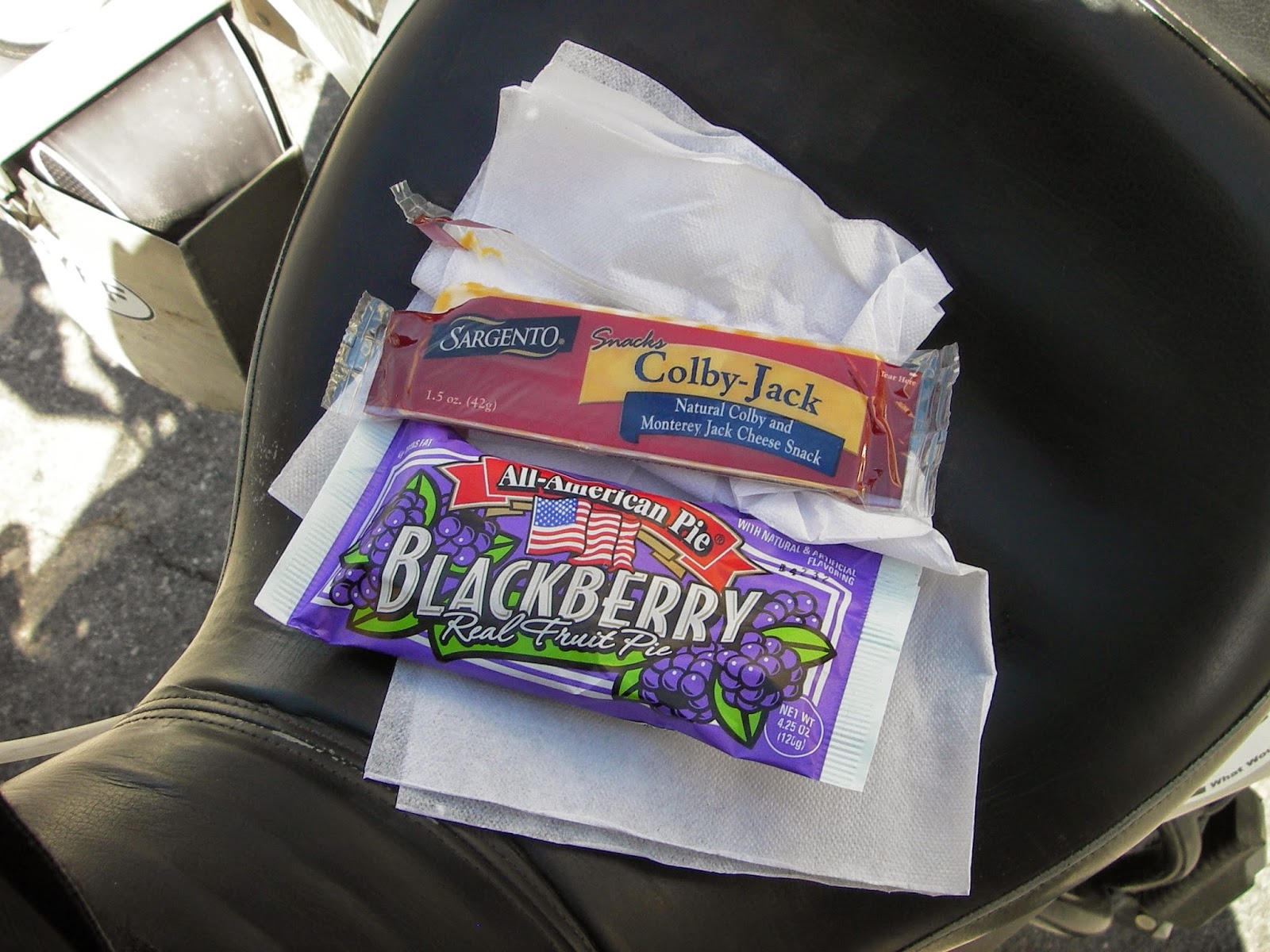 Panaca, NV is a small, small burg with a 25 mile per hour speed limit.  It's rather pleasant to ride through and gawk at the buildings. 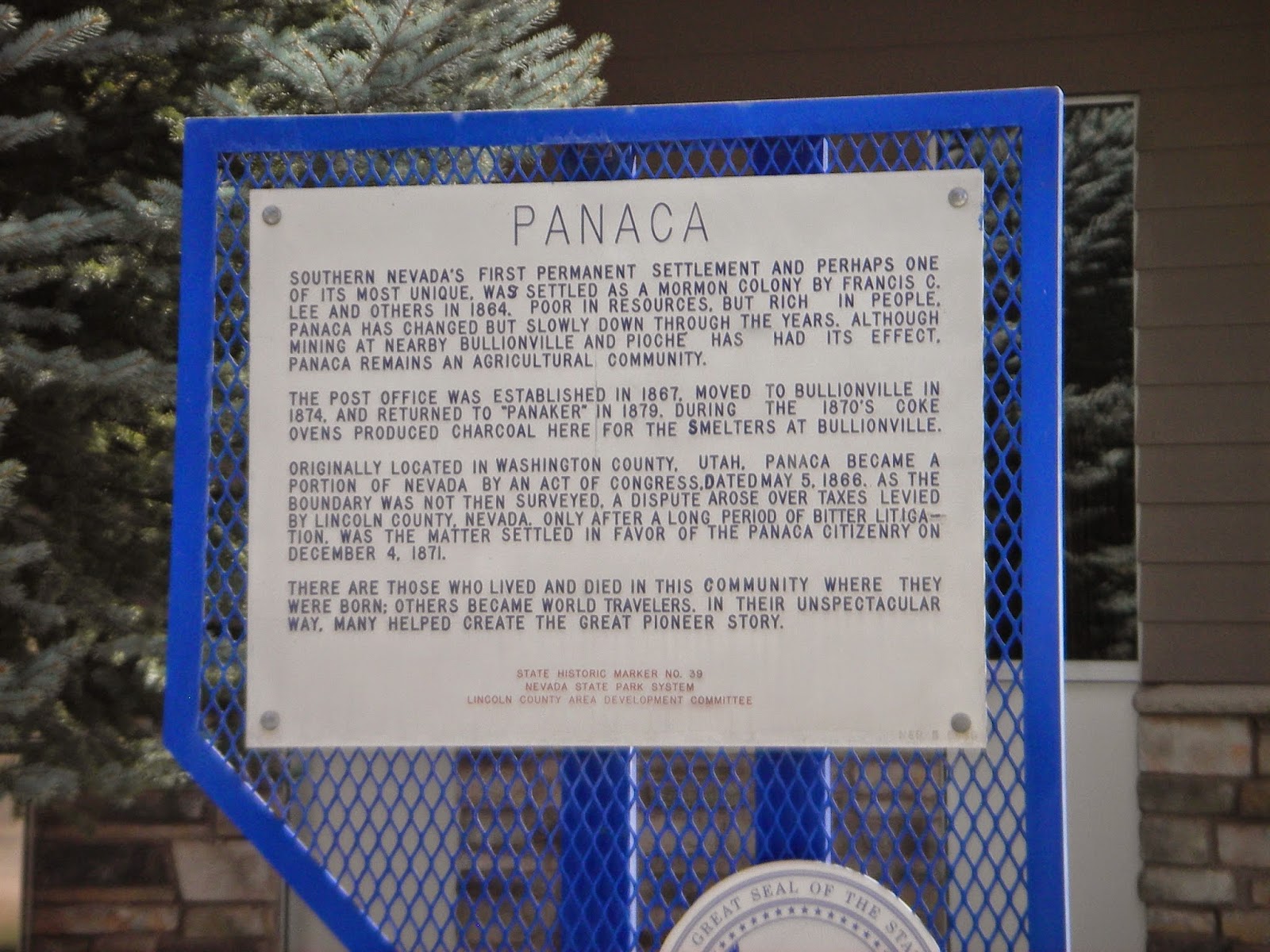 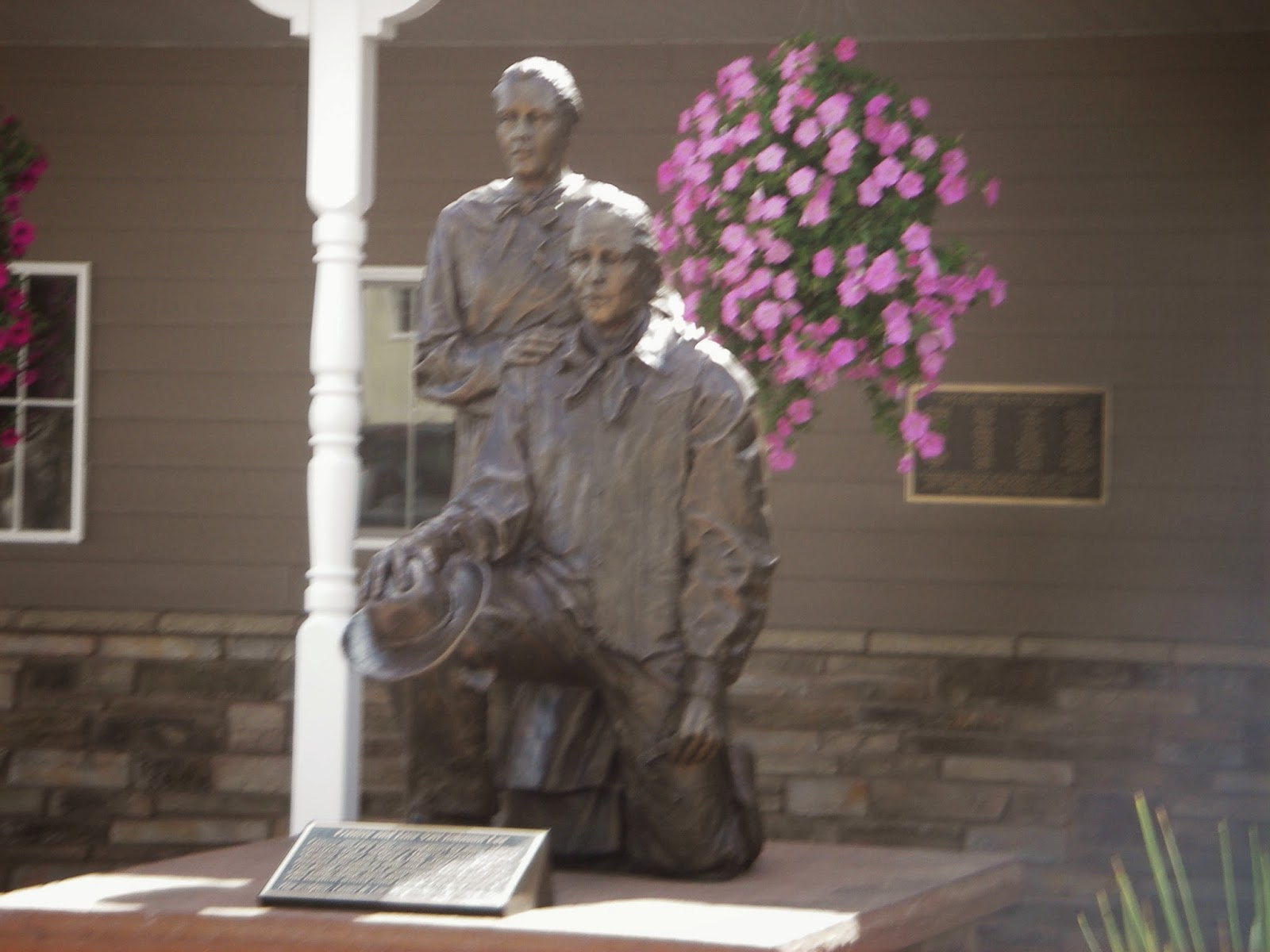 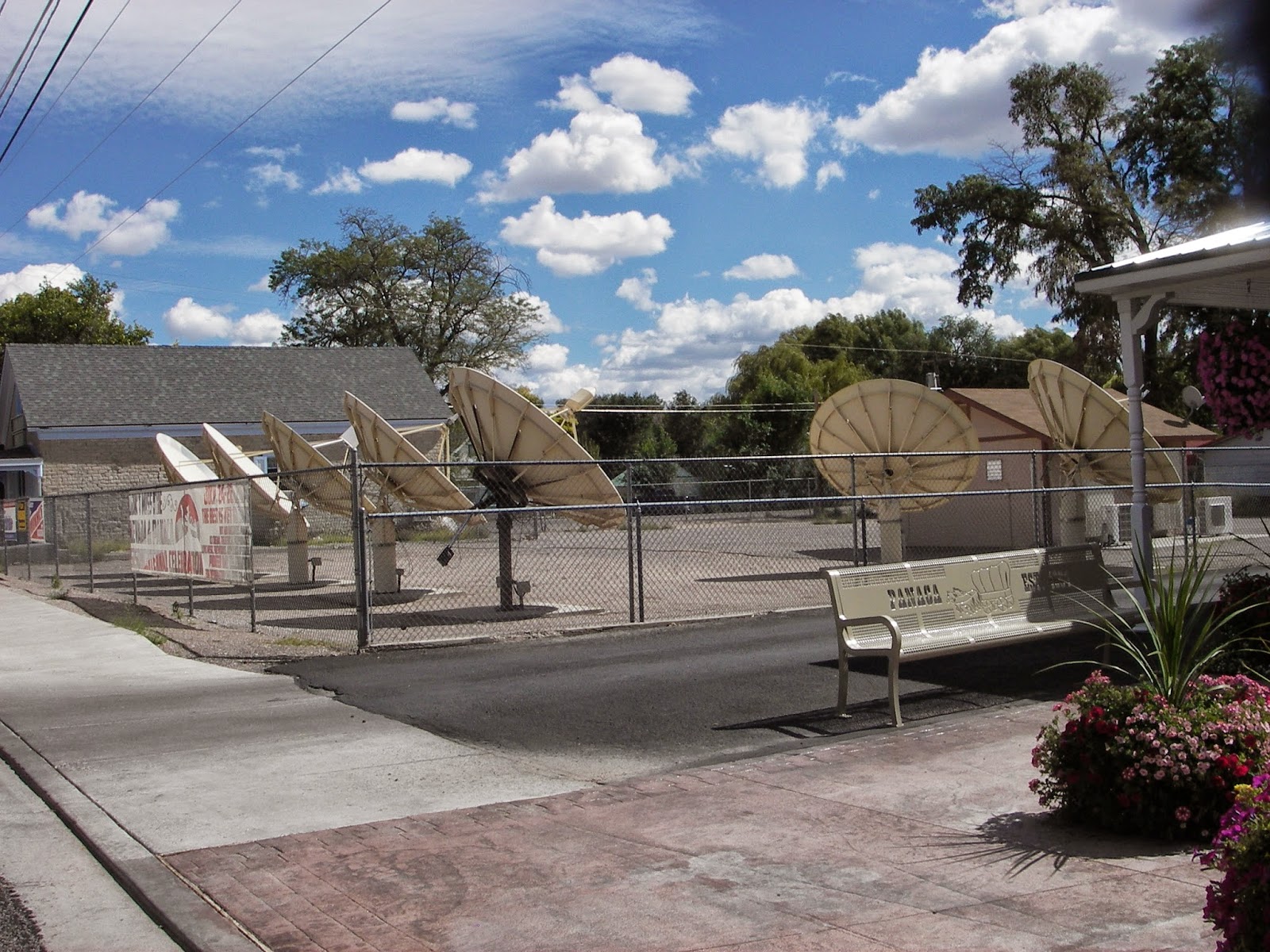 Finally, crossing over into Utah, almost home now.  I almost, almost, almost dropped my bike here when I pulled off to grab a picture.  It was a gravel pull off and I think I hit the brakes too hard and the rear end slid out and I almost went down.  Sheer will and stubbornness kept the bike from going all the way over.  Yikes!  Although there is some traffic out this way, it is pretty remote. 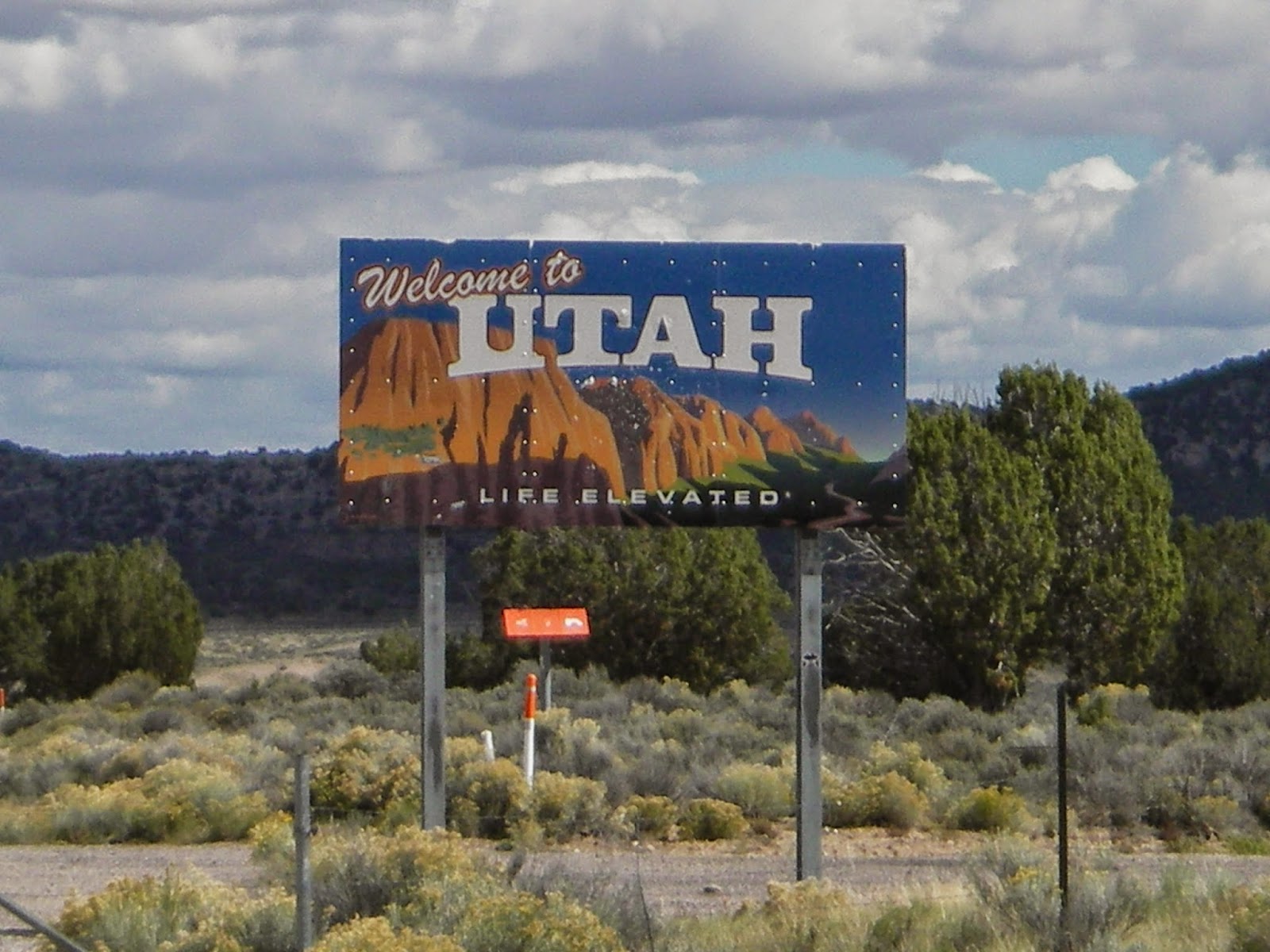 I took another quick break in Enterprise, UT.  Here is a picture of their town Heritage Park. 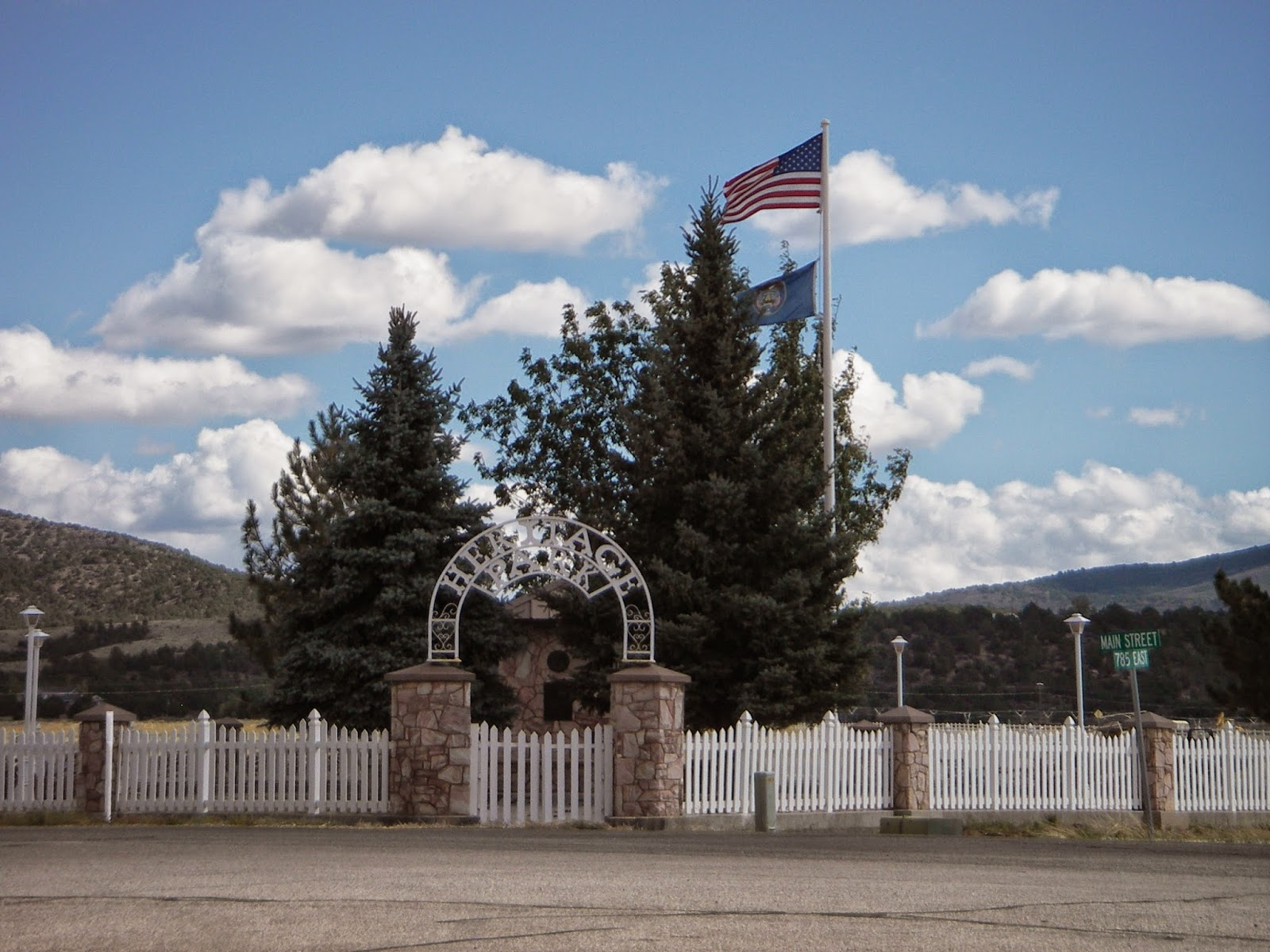 Now, I'm only maybe 60 miles from home and on very familiar roads.  The temperature had warmed up and it was quite comfortable as I motored along Highway 18 toward home.  I was ready to be home.  I turned into our community and stopped to take a picture of Big Red Mountain, our landmark.  I always love to see the mountain, it means I'm minutes from home. 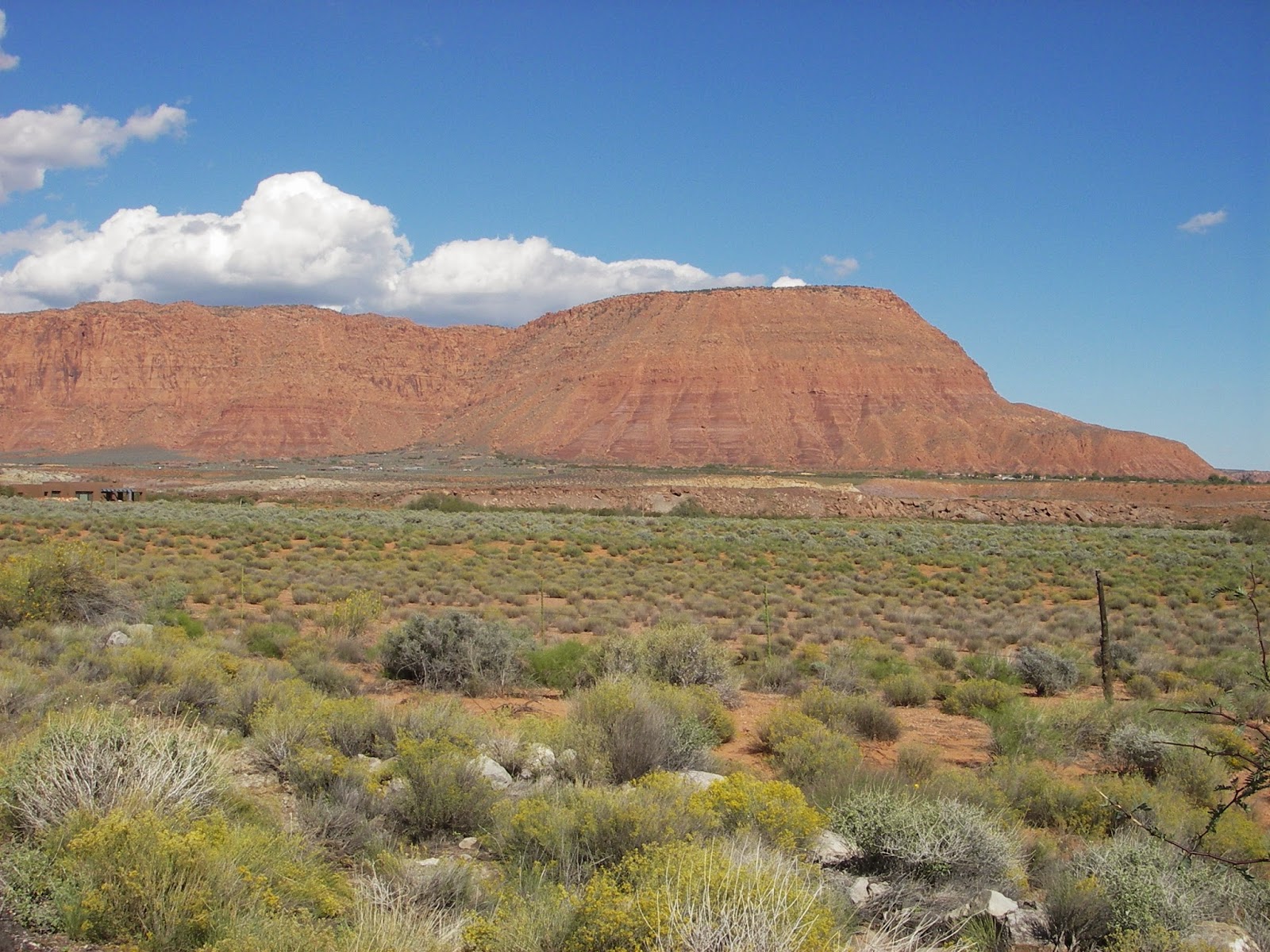 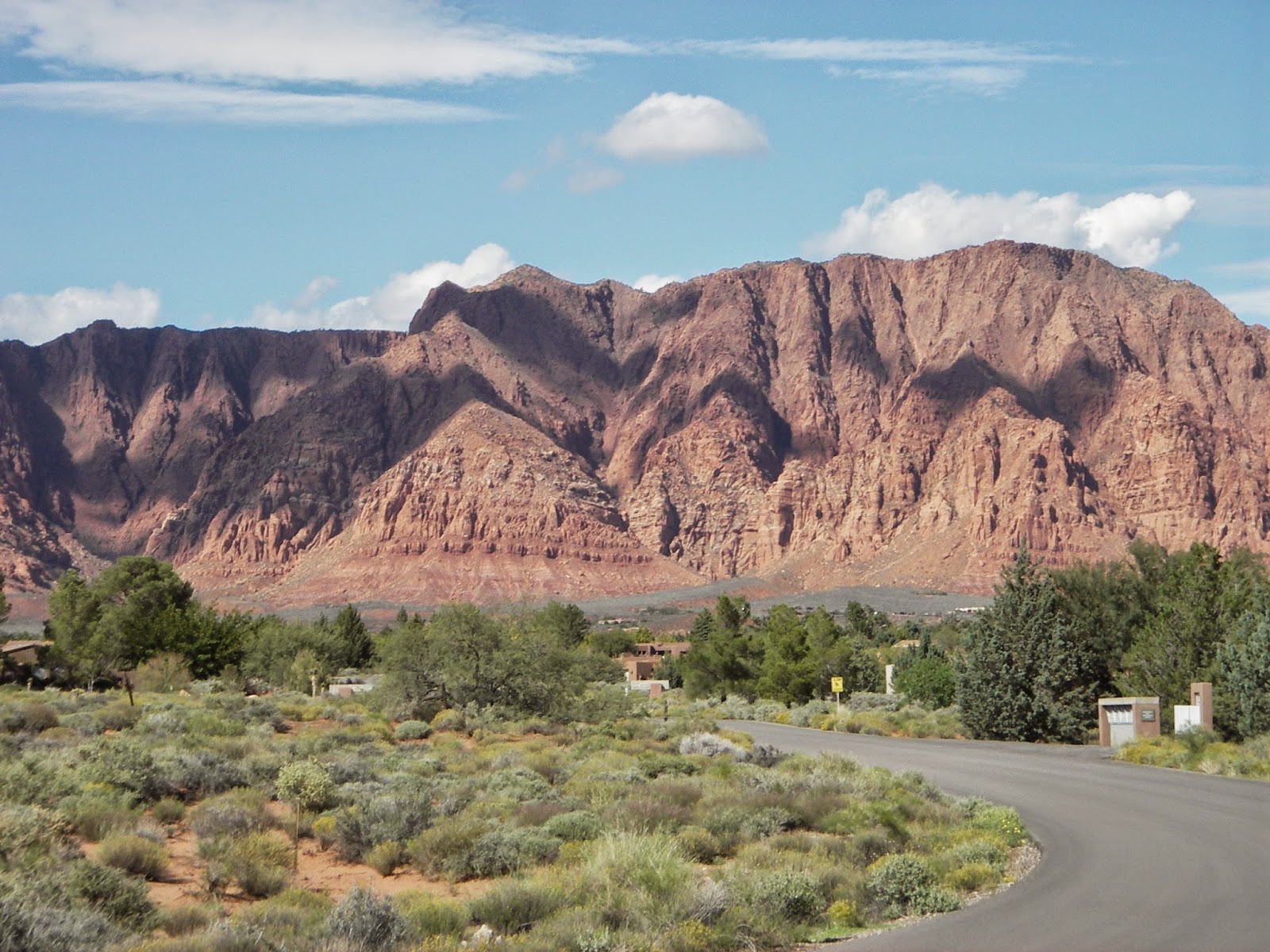 Well, everything was grand until I went to turn the corner of our road and discovered this mess!  On Saturday, apparently my neighborhood got hit once again with epic rain which caused more flood damage.  The road was covered in soft, silty, red dirt.  Yuck!  I was tired and not really in the mood to tackle that.  So, I continued on up the main road to try coming in from the back side.  Well, after crossing a number of intersections and stretches of road covered in this stuff I got to a point where the road was closed.  Yeah, about two blocks from my house.  Darn!  So, I had to backtrack over the nastiness yet again. 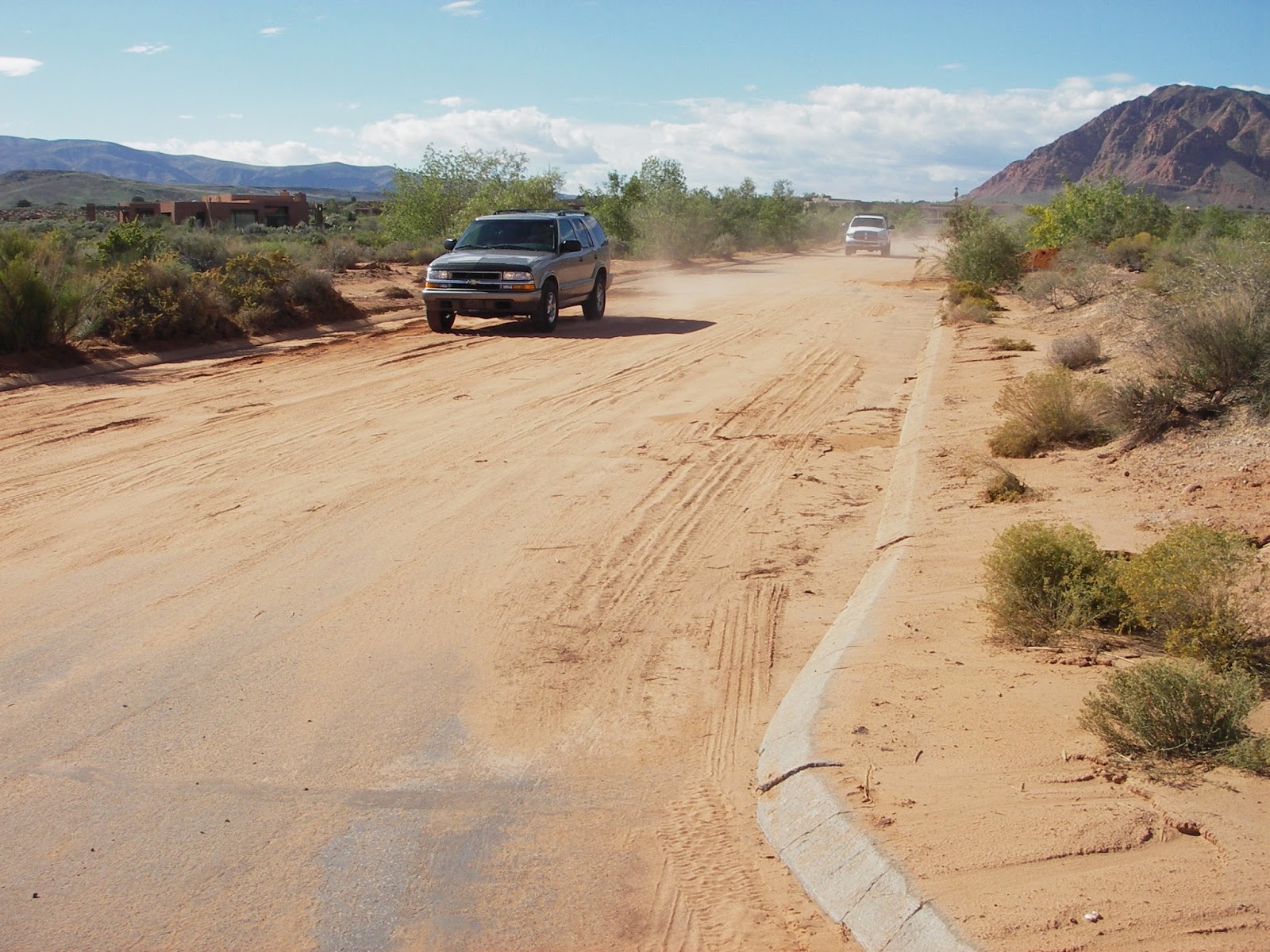 I returned to my starting point and frankly, I cheated.  I called my husband to rescue me!  And, of course, he did :-)  From the picture here, we are only two blocks up the road. 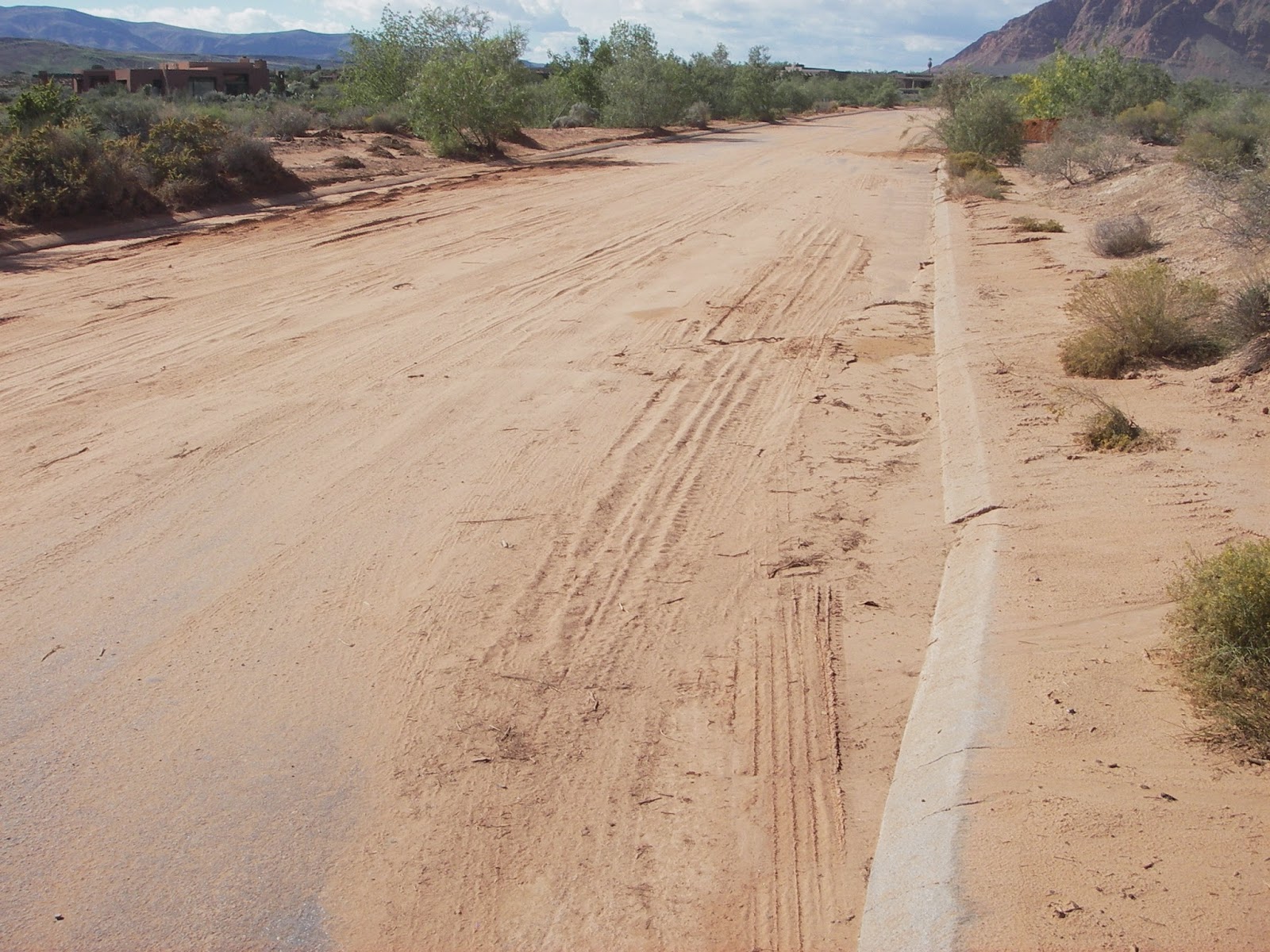 So, Eric rescued me and I arrived home safe and sound after a lovely long weekend in Gerlach, NV.  It has been a wonderful trip, even with the poor weather.  After all, life is an adventure and sometimes we just get more or different that we bargained for.  I was happy.  I was home with my honey.  I have lasting memories of another Gerlachfest.

Thanks to all of you who have followed my blog.  I'm deeply touched that you find it interesting enough to read it!

I have no idea yet what the next adventure might be, but, I'm sure I'll come up with something!