Oh my heck!  Yup, oh my heck!  I'm exhausted but in a good kind of way.  I am so not used to working a full day and especially standing on my feet for hours and hours.  I admire you folks who have that kind of job that requires you to be on your feet all the time.  Bet you know the best shoes to buy :-)

So, let me tell you about my first day on the floor.  Actually it was only 1/2 day on the floor.  The first part of the day was spent in a training class.  But, I'm getting ahead of myself.  I'm going to back up a bit and give you the whole story.

Last night I was in bed by nine and sound asleep by 9:01.  I woke up just before the alarm went off at 5:50 am.  Took my shower and got dressed.  Now those of you who really know me, know I'm not much of a foo-foo girl.  But today was different, I actually put on some make-up (first time since my wedding in 2012!).  I managed to not make a clown face :-)  And....I put on proper ladies underwear.  Hahahaha, I'll just leave it at that.  Again those of you who really know me know what I'm talking about.

So, made up and properly dressed, I made my way to the breakfast room, grabbed a muffin and a cup of yogurt and returned to my room to eat in peace and quiet.  I met the crew at the appointed time and we drove over to the event center.  Shortly after our arrival I was escorted to the training room.  It was nice in that they had coffee, fruit and danish.  Yummy decaf coffee!

I had to snap a couple of pics of this custom Indian that was unloading just outside our training room. 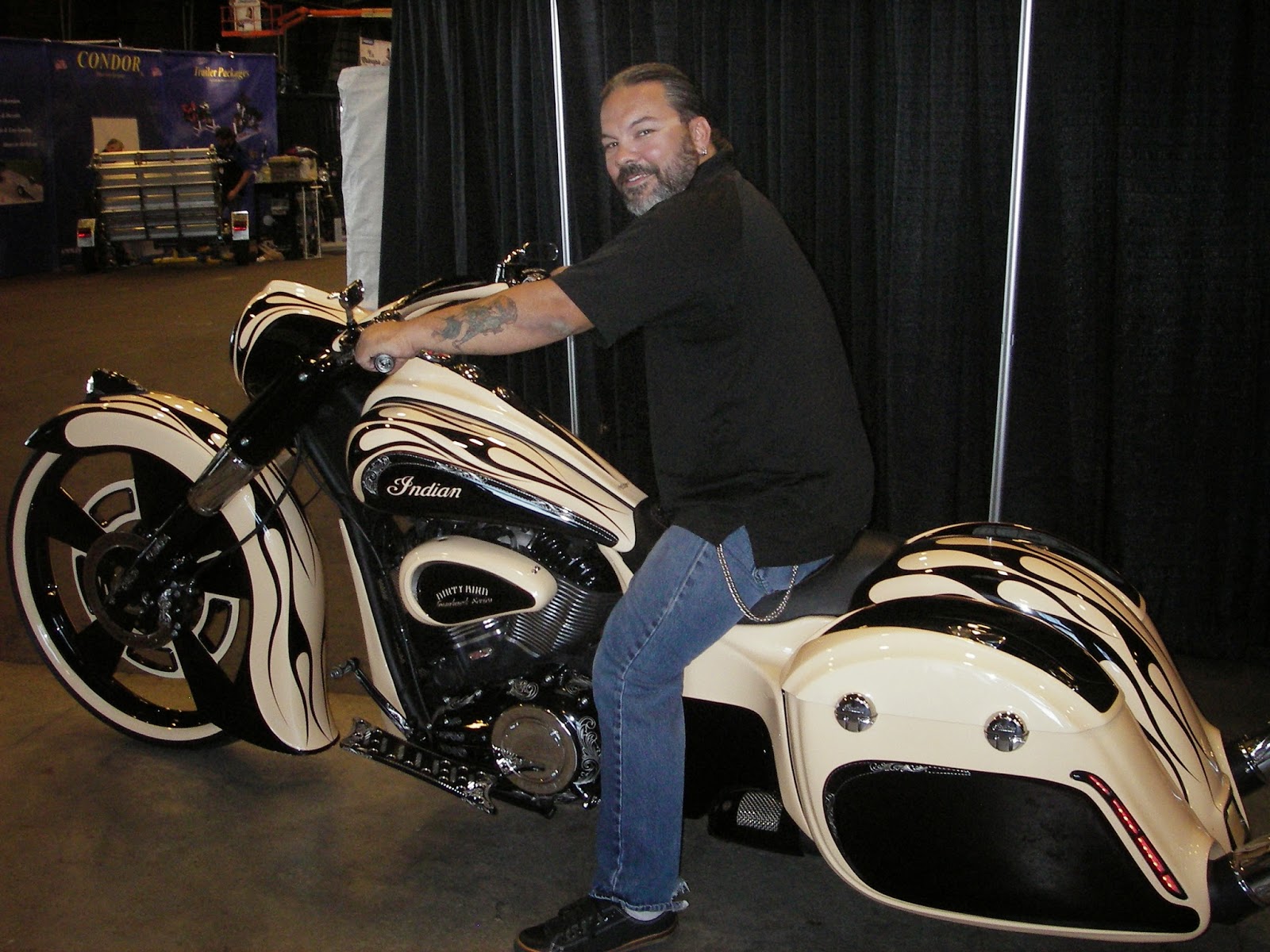 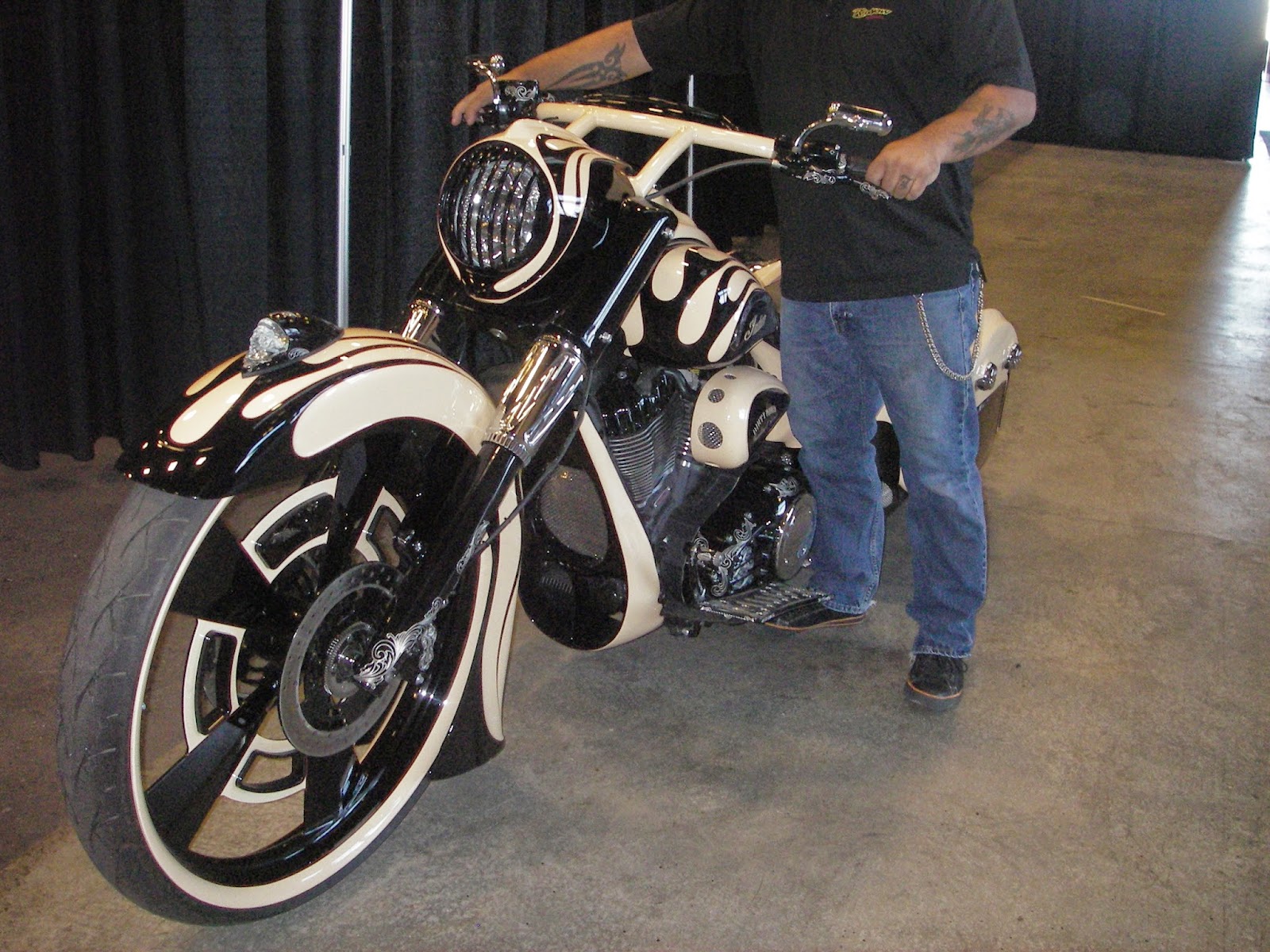 Wow!!! Too bad the photos don't show the awesome detail on this bike.  I'll make an effort tomorrow to take more and better pics of some of the incredible bikes on show here!

Back to the training, besides me, there were several dealer representatives and a few BMW corporate reps.  Shawn (who also works for RawHyde Adventures) was our instructor and he was fabulous.  Basically, he covered the new bikes for 2015 and the changes to current bikes.

I took good notes and learned a lot.  Hope I can remember it all!  We covered a lot of material, took a quick break and back at it.  They treated us to a nice catered lunch and then we went back to the BMW booth to go to work.

The show was scheduled to open at 1 pm so before the public arrived, I went to work polishing the bikes on the floor, dusting every possible surface, wiping the static displays and cleaning just about anything I could find.  Just so you know, all the crew participated in this endeavor.  With everything shining brightly we were ready for the opening at 1 pm.

And then, people starting pouring in to the event center.  I took up a position between the Enduro (GS Series) bikes and the Roadster bikes and that's pretty much where I stayed the entire afternoon.  I'm pretty comfortable with the GS series since I ride a baby F650GS and had done a lot of research prior to my purchase.  The Roadsters were new to me, but sexy and easy to figure out.

I had a ton of fun!!!  Yes, I did :-)  I had so much fun directing folks to the different bikes, encouraging them to swing a leg over and discuss the pros/cons, etc. of the bikes.  I listened to many, many stories and told a few myself.  The R nine T was very popular because it is so very different in design.  It reminds me of a cafe racer that a total hipster would ride.  Almost everyone who saw it had to hop on and get a feel for it.  That was fun!

Then, of course, the GS series.  Yippee!  I had no problem explaining the differences, changes, options, etc. of the GS series.  Had folks of all sizes and genders trying on the GS bikes.  I didn't spend any time on the other side of the display where the sport and touring bikes are lined up.  I'll do that tomorrow and get a feel for those bikes.  Today was spent in an area that I was comfortable and all was good.

The centerpiece of the BMW booth was the display of Valerie Thompson's S1000RR that she rode for several land speed records, including 200+ at Bonneville.  I was fortunate enough to meet Valerie and spend a few minutes chatting about bikes and other good stuff.  And, my friend Roger Van Santen showed up just in time to meet Valerie and get a photo! 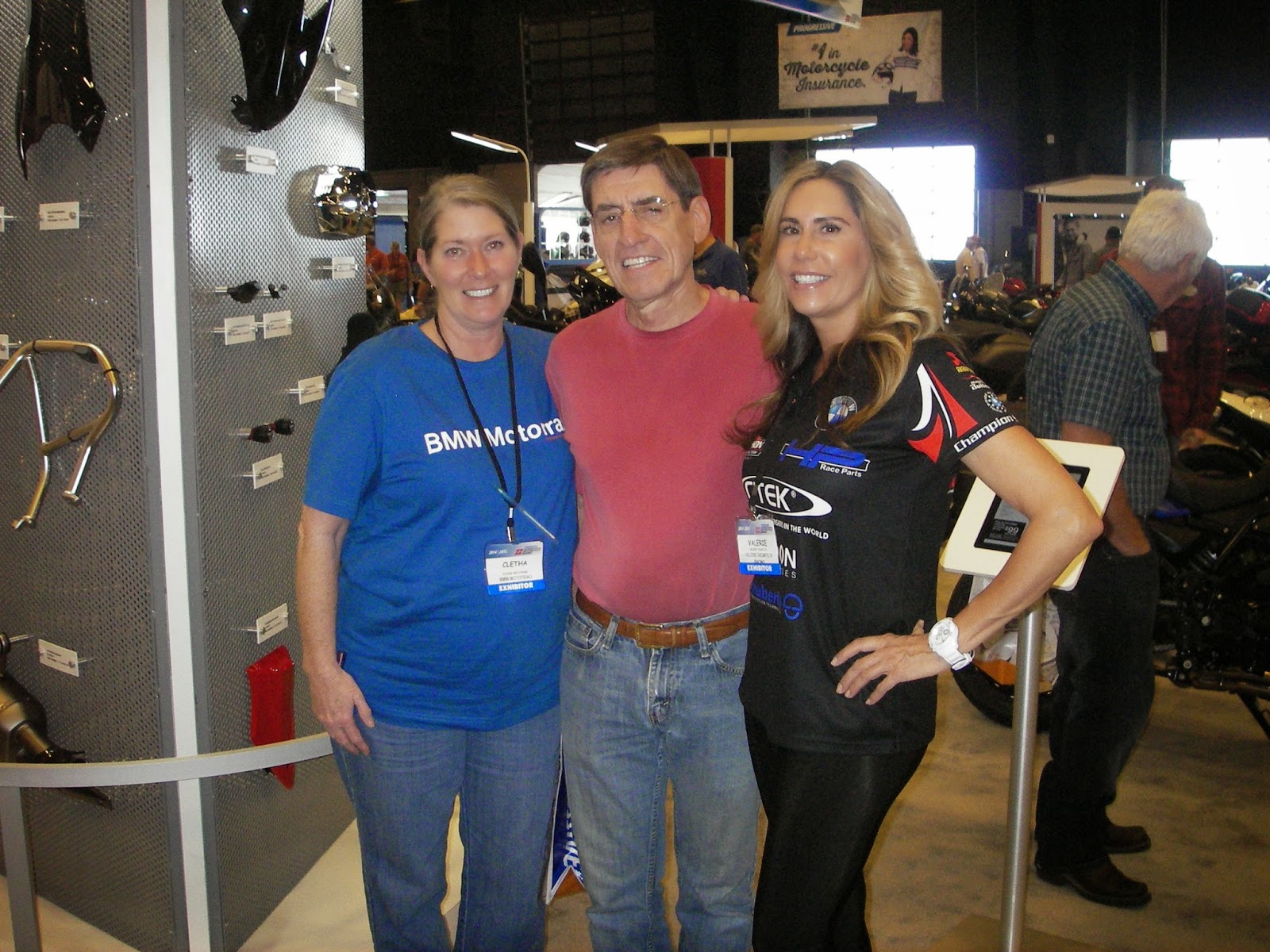 Hahahaha, another picture just in case...so look at the photo-bomb dude!  What do you think he is thinking?  He was eyeing the R Nine T and then he was eyeing us.  LOL.  Bet he was wishing he could get a picture with Valerie ;-) 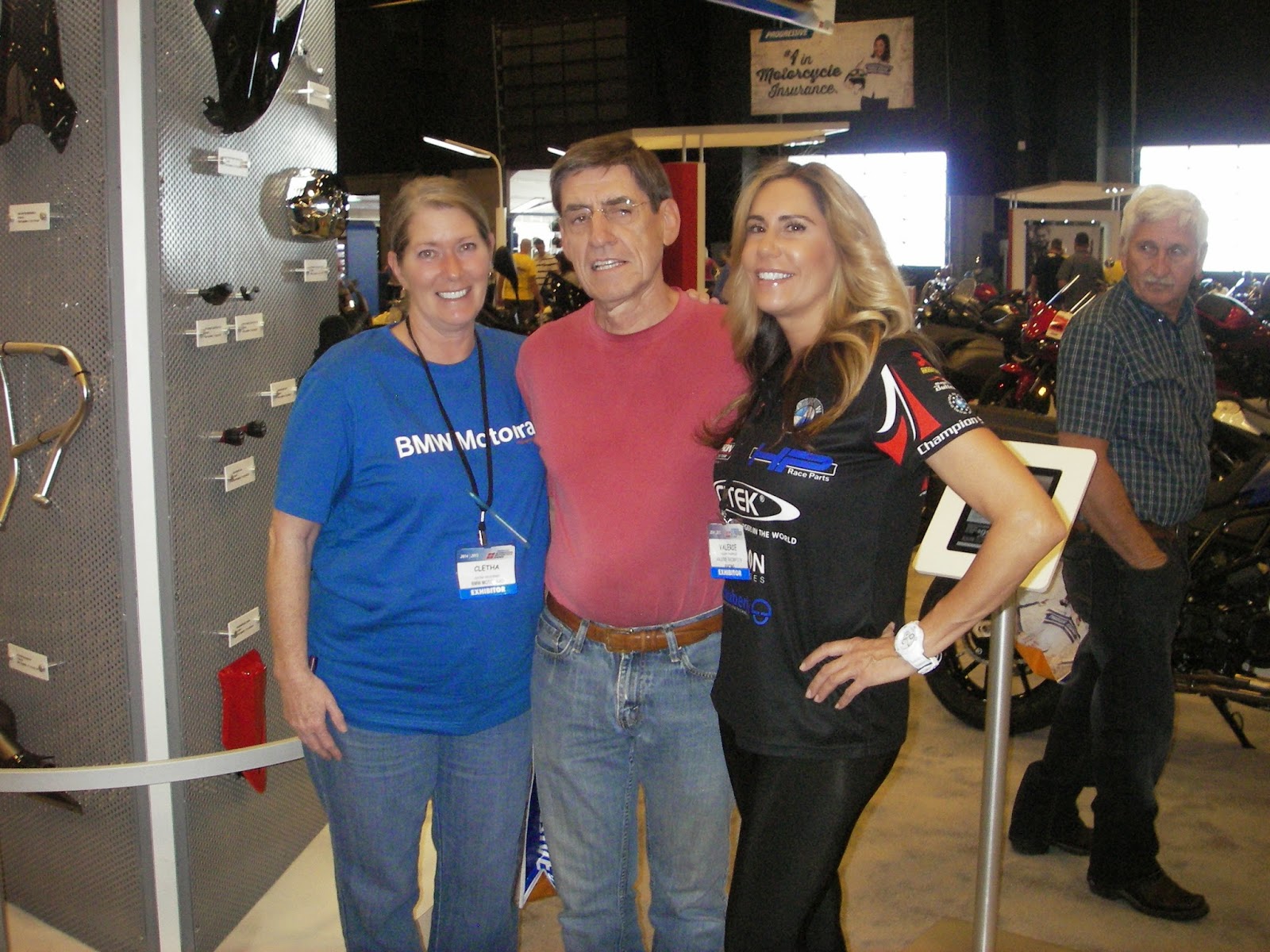 It was terrific visiting with Roger.  He really helped put me at ease.  Talking with someone I knew just helped me relax and slide into what I was doing.  Thanks Roger!!!!

And so my day progressed.  Greeting people and getting them excited about trying out the bikes on display.  Not really so difficult.  I love motorcycles and I love people who love motorcycles so this was a match made in heaven for me.

Here is a pic of me in the GS pit.  My favorite place to be!! 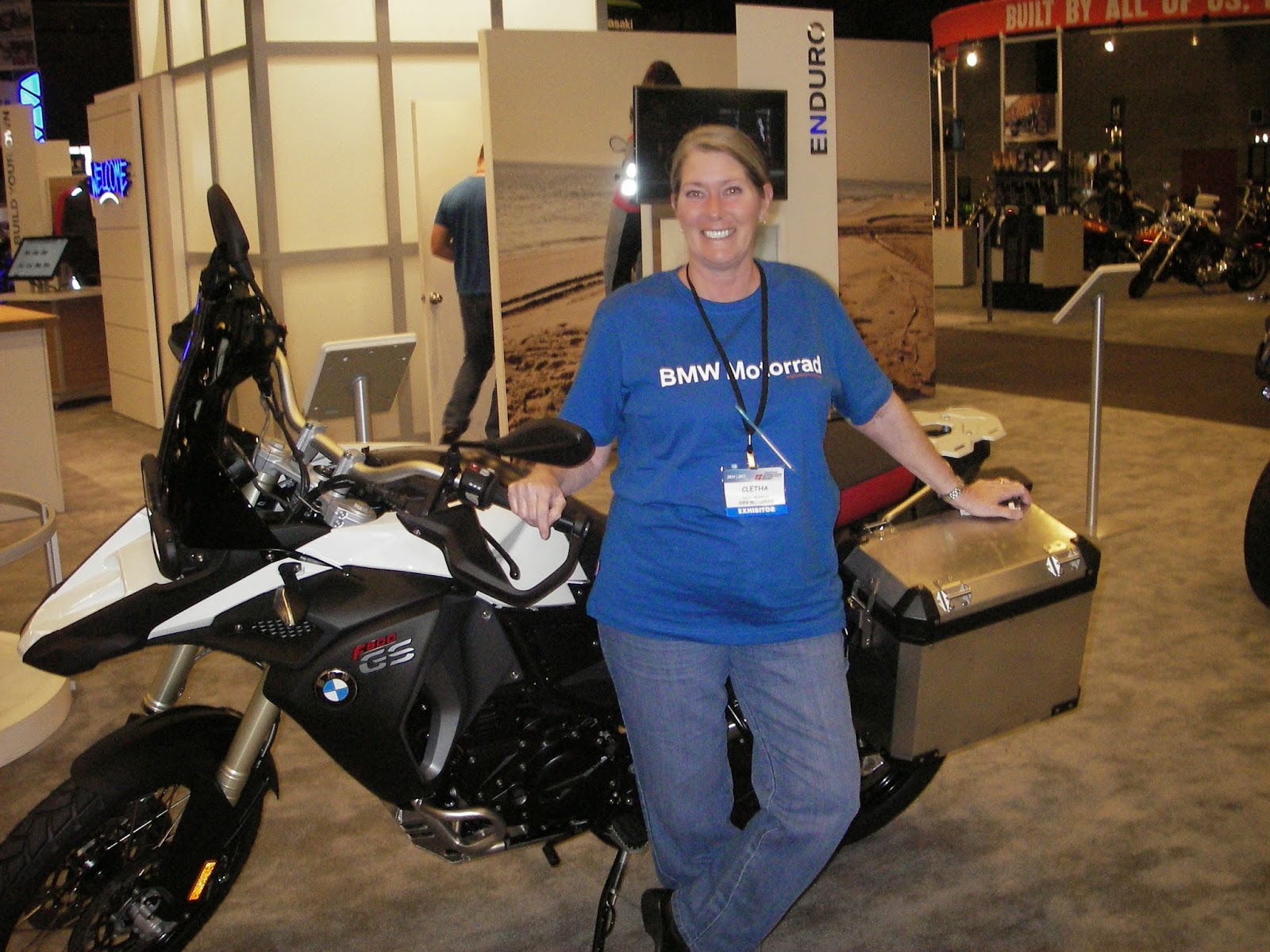 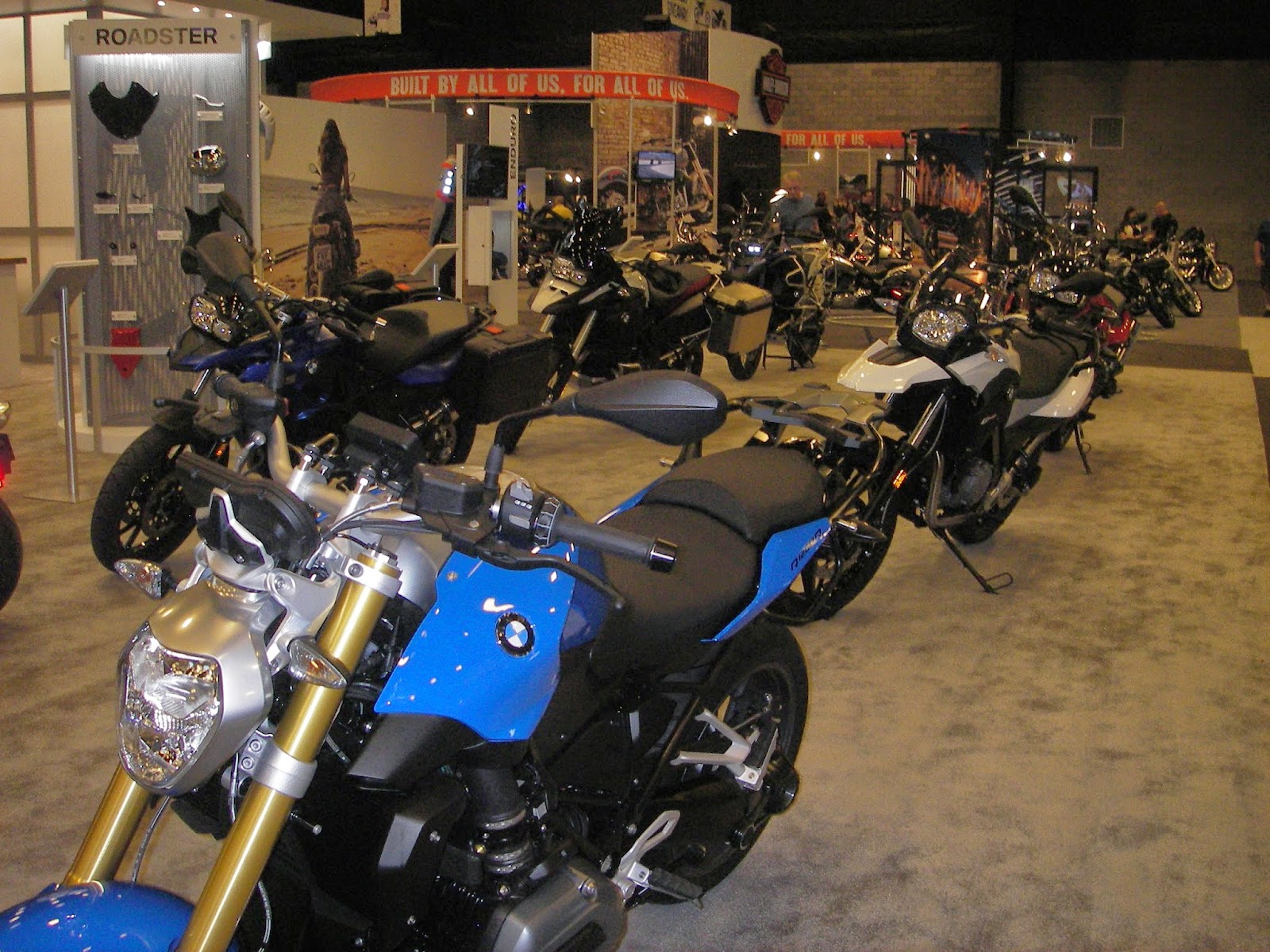 Yeah, baby, that's what I'm talking about!  The R Nine T.  Cafe racer, hipster, come sit on me bike!  The Suzuki dude couldn't keep away from it :-) 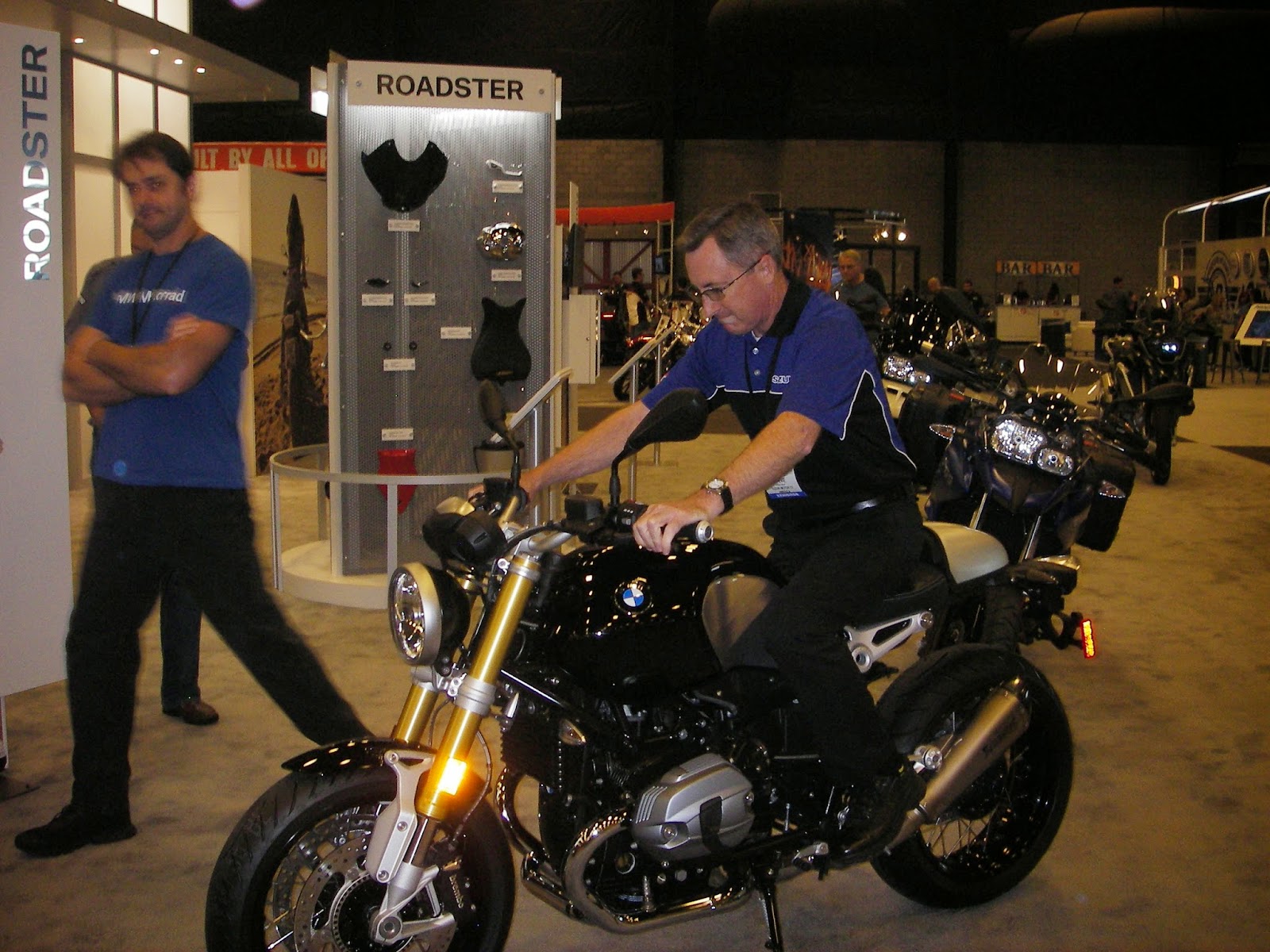 Here is a picture of Valerie Thompson's world record S1000RR in the center, rotating display. 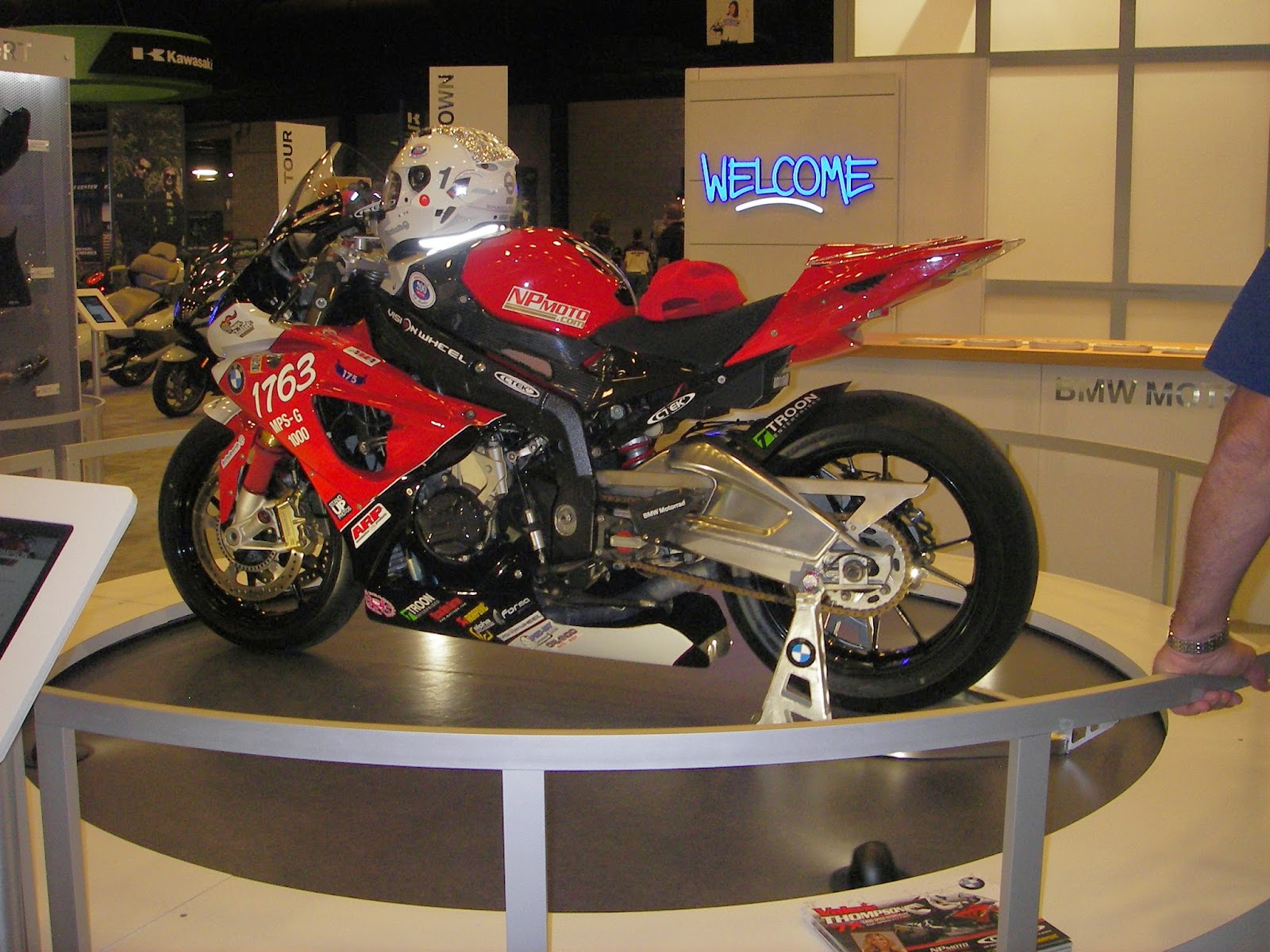 A view of the other side of the booth with the Sport and Touring bikes. 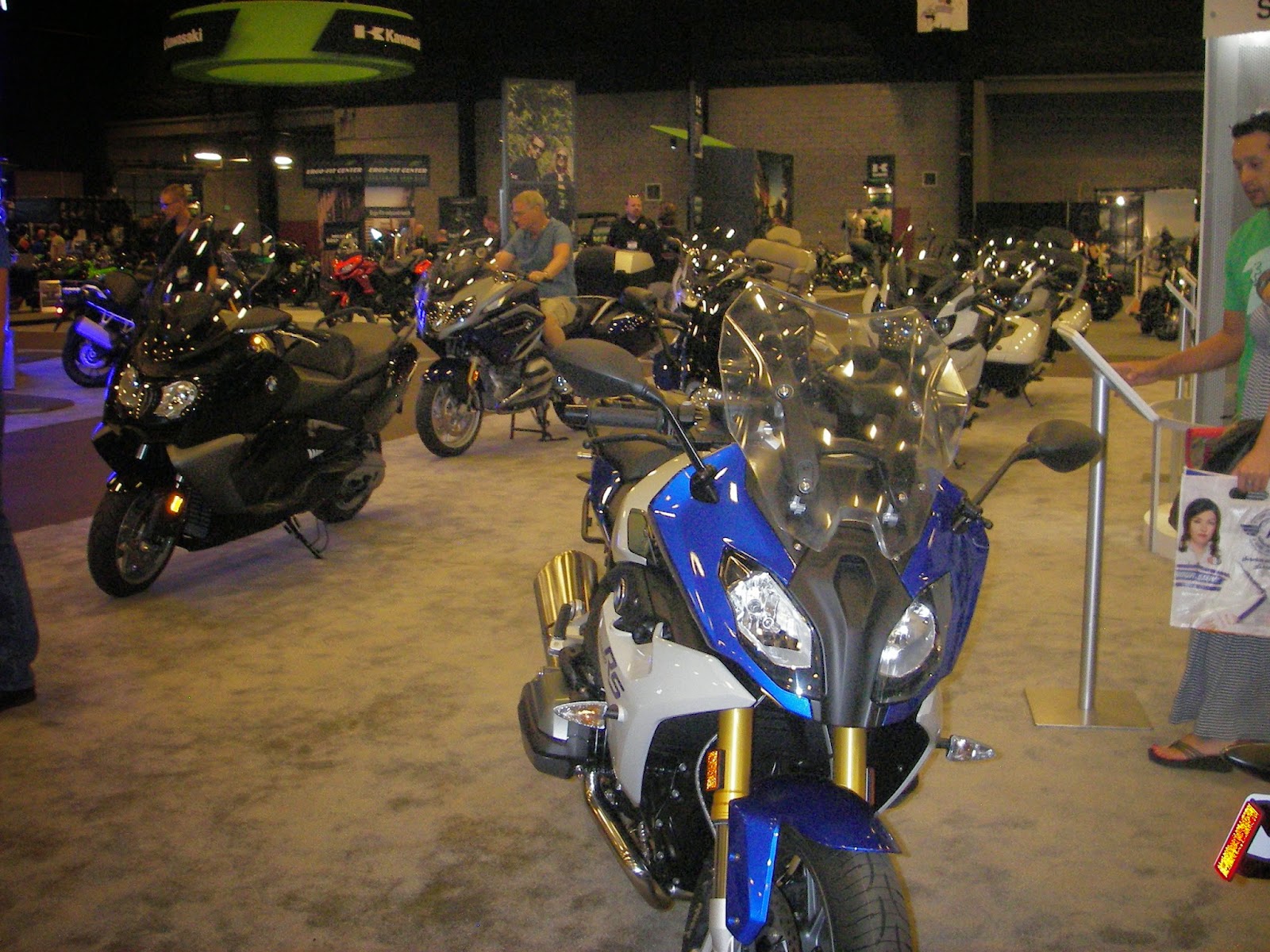 Valerie and her honey Ray Garcia. 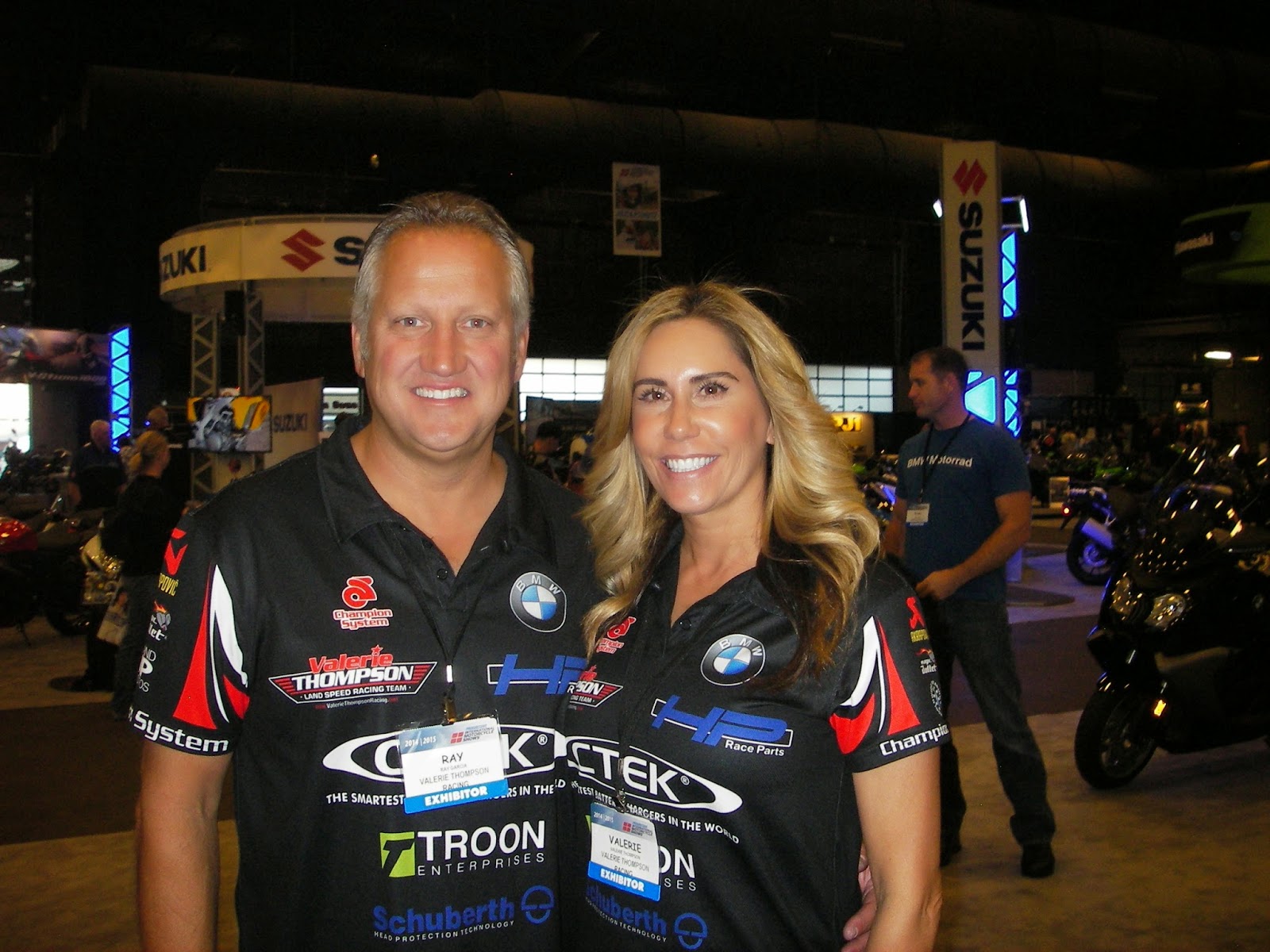 So, that was it, folks.  I was on my feet most of the day and man, do they HURT tonight :-)  I had a great time greeting people and showing off the bikes.  I had a good training session this morning and learned a LOT!

Tomorrow, I'll try to get some time on the other side of the booth and learn more about the Sport and Touring bikes.

I'm having my dinner in room again tonight.  No energy to go out and be social (bad me!).  Just wanted to check my email and post my blog.  Fortunately, I don't have to be up and at 'em until 9:00 am tomorrow.  Lots of time for chilling and sleeping tonight, yay!

Thanks everyone who reads my blog.  I really appreciate you taking the time to read my stories.  I'll give you another update tomorrow!