I slept until almost 8:00 am.  Oh, it was a glorious sleep.  I was exhausted last night and by the time I fell into bed it didn't take much more than a few minutes before I was in dreamland.  I woke up with the alarm at 7:00 am and turned it off and then promptly rolled over, pulled the covers up and slept another 45 minutes.  Good thing I didn't have to be in the lobby ready to go until 9:00 am!

Last night, I again passed on dinner with the crew and instead had a frozen microwave meal in my room.  I don't know how these folks work all day and then go out.  I would have fallen asleep at the table, I'm sure :-)  I could just picture myself eating dinner and my face slowly getting closer and closer to my plate until, SPLAT, I fall into my dinner sound asleep.  I really wanted to avoid that embarrassment, so stayed in my room for the evening and early to bed.

Fortunately, my feet had recovered with an overnight sleep and I was able to walk without cringing.  We headed out to the event center at 9 and by 9:15 we were headed toward our booth.  On the way in, I spotted the new Slingshot and had to take a few pictures. 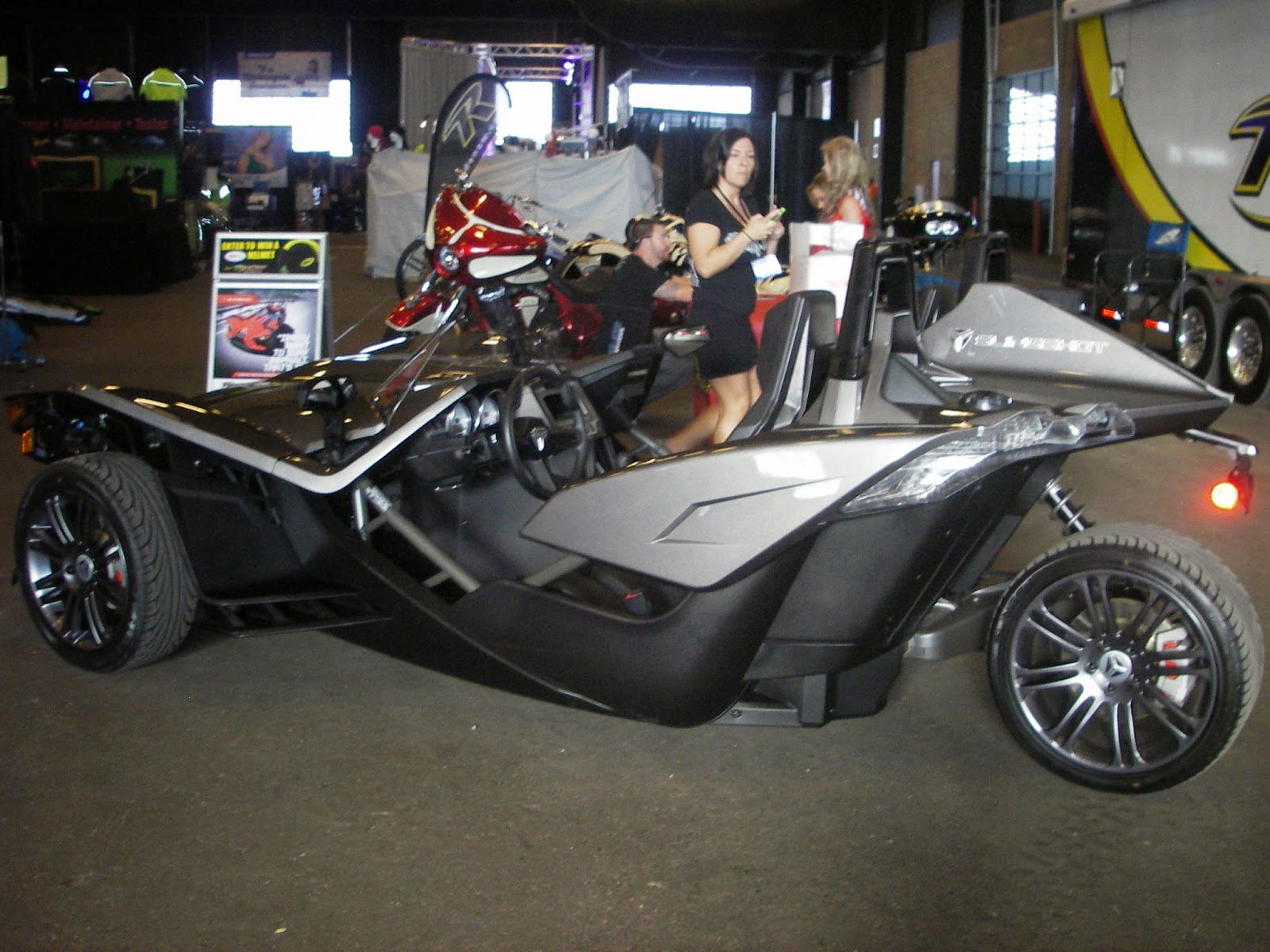 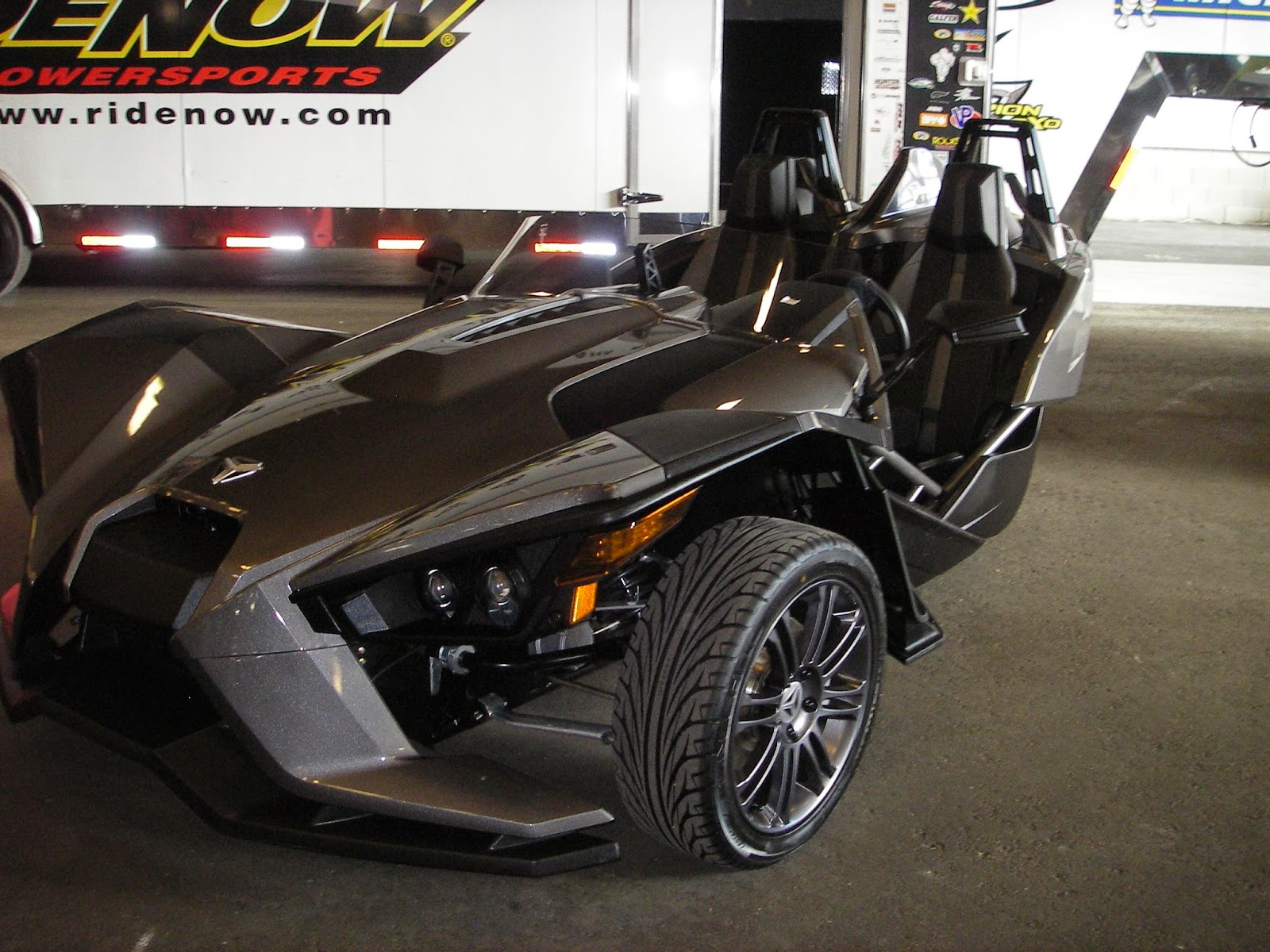 It's not a "bike" but it is way cool.  I think it would be a blast to drive.  A friend has one on order so if I'm lucky, I'll get an opportunity to take it for a spin!

This morning I felt much more comfortable about what to do.  I got busy with the other team members setting up the booth for the day.  We polished bikes, set up computer stations and generally made everything spic and span and ready for folks to stop by.

The doors opened at 10 and not long after the opening I was pleasantly surprised to see Jodie at our booth!  Photo op :-)  This gal is a hoot to hang out with and a wonderful rider as well.  I'm so tickled she took a few minutes to find me and say hello. 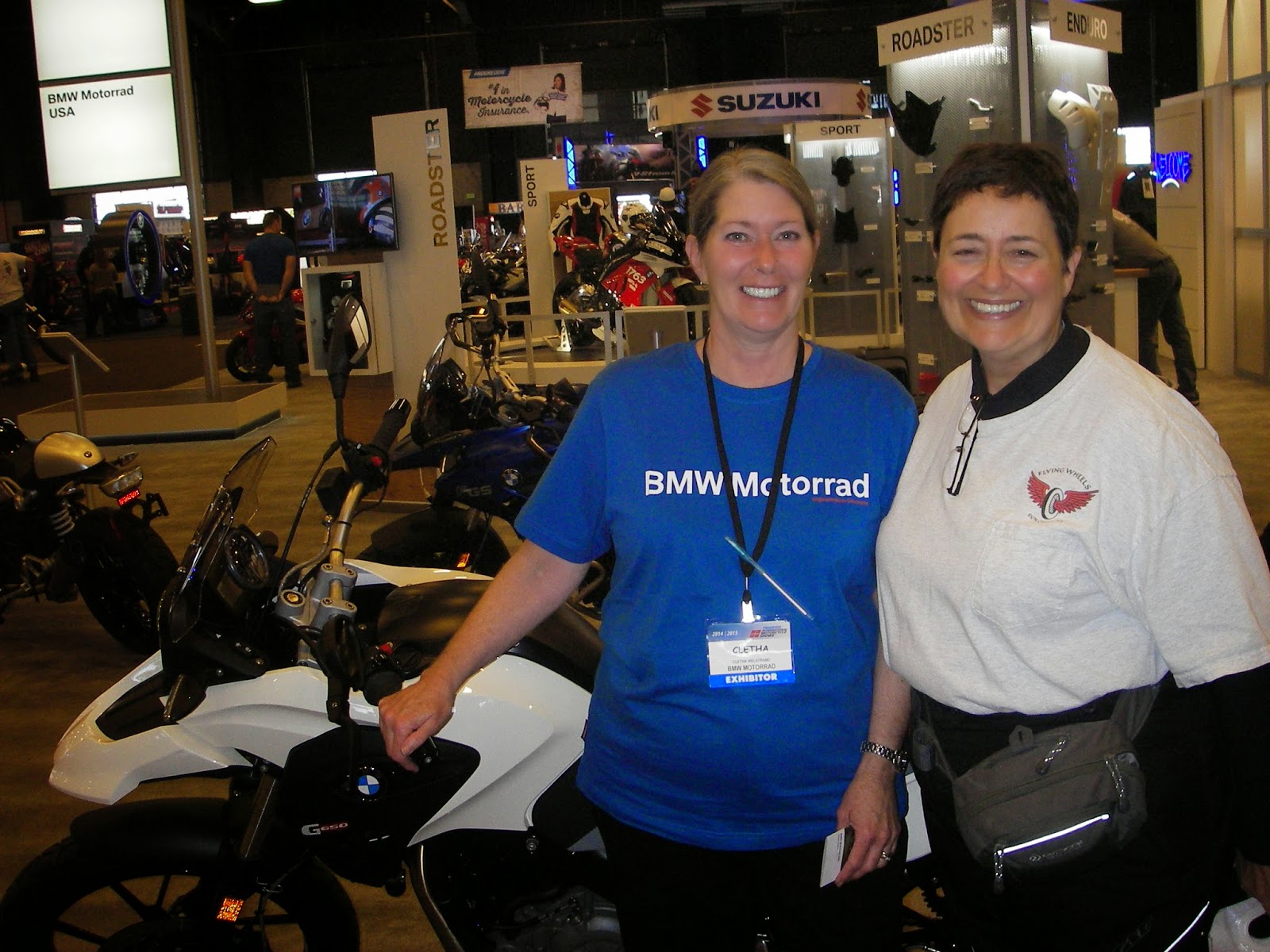 Today was much busier than yesterday and time passed quickly.  I mainly hung out on the Roadster and Enduro side of the booth.  I'm pretty comfortable talking the finer points of the GS series and I'm becoming pretty good with the Roadsters as well, especially the R Nine T.

I had several folks stop by to say hello. Bob sneaked up behind me and surprise!!!  Great to see you, Bob.  Long time Beemer fan and facebook friend.  I really enjoyed visiting with Bob and hearing his stories. 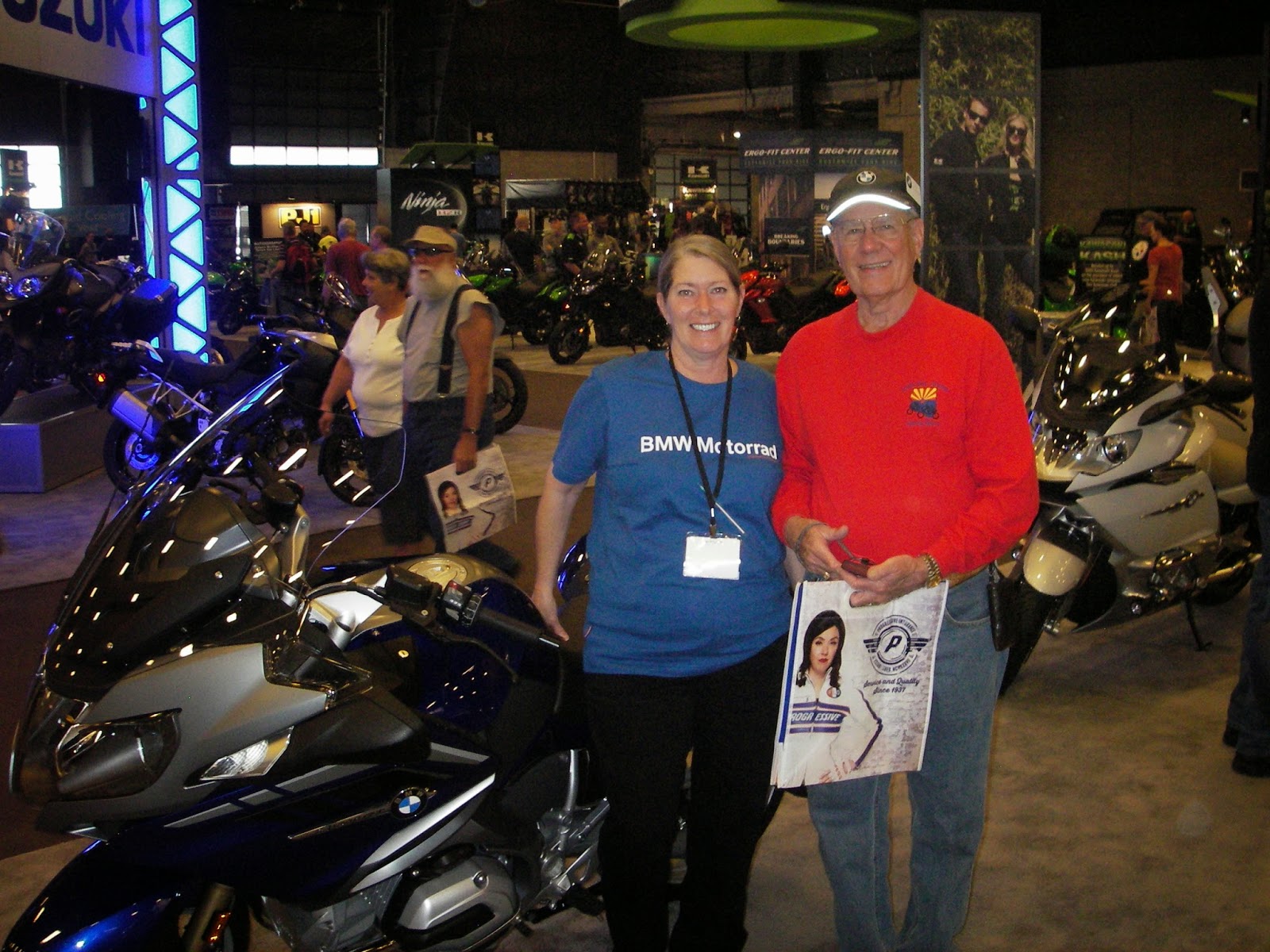 What?  Here's another Bob :-)  Bob S. is one of the first LD riders I met in my short LD riding career.  It was great to catch up on stuff and have a bit of a visit. 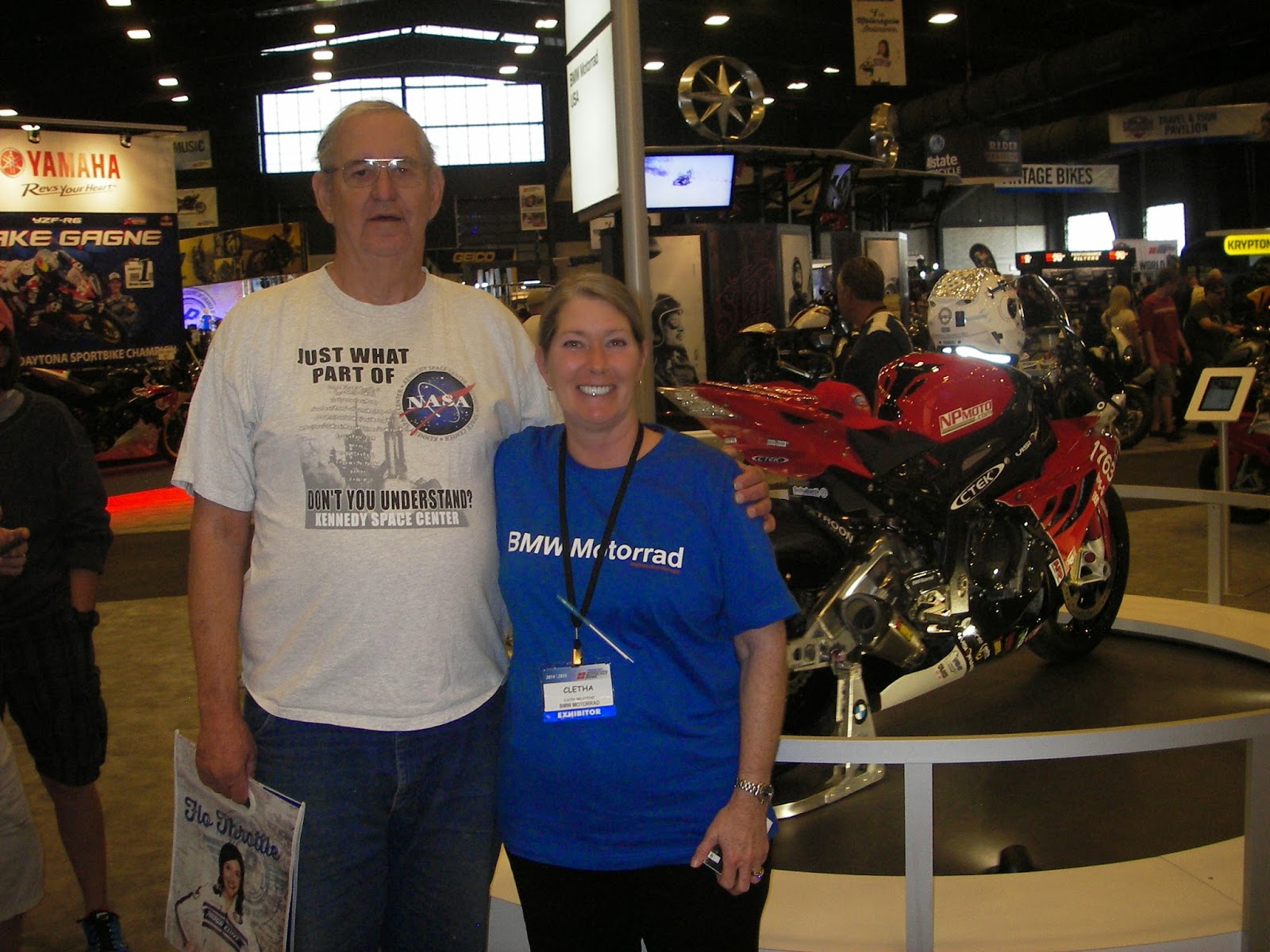 Somehow, I lost a few pictures and that makes me sad.  I had some pictures of Jeff and me but they disappeared!  Jeff --- if you have any pics, please send them to me so I can post.  I'm so sorry - it was such a delight to see you and your wife and chat about bikes, Iron Butt rides and our next adventures!

The time passed quickly when it was busy.  I enjoyed showing folks the bikes and providing information.  Yes, there were a few weirdos and once I mouthed "help" to one of the crew and bless his heart, he promptly came over to where I was chatting with some folks and saved me.  He very politely said I was needed elsewhere and gave me an escape!  Thank You!!!!  Hahahaha.  Later in the day the other crew members suggested a "sign" to ask quietly and secretly for help and an escape.  LOL, I never, in my life, have been in that kind of situation.  In retrospect, it was hilarious.  At the time, I was just thrilled to get a break and get away!

We were very busy most of the morning and I didn't get a lunch break until about 1:00 pm.  Unfortunately, the food lines were long and I was in a hurry.  I ended up with a cheeseburger that had probably been sitting on the warming tray for 3 or 4 hours.  Ick, I dressed it up with lettuce, relish, mustard and ketchup but that didn't really help much.  It was awful.  I would have preferred the chicken teriyaki or Texas BBQ but those lines were very long.  Lesson learned - I will either wait until later or get out earlier in able to get a decent meal.  Regardless, I had some food and was ready to get back to showing off the bikes!

The afternoon passed just as quickly as the morning.  We were busy and had lots of folks stopping by to check out the bikes.  I learned a lot and by late afternoon, I was quite confident on any of the GS series as well as the R Nine T.  I still need some more time on the S1000R to feel comfortable.  And, I still haven't gone over to the other side to show off the Sport and Tour bikes.  Maybe tomorrow :-)

By evening, things began to slow down and that's when I noticed how much my feet were screaming bloody murder.  When I was engaged and busy, I didn't notice the feet so much.  But, when things slowed down and I had nobody to chat with, well, that's when the aching feet began to cry :-)

Just to keep my mind off those poor little tootsie, I grabbed some rags and started cleaning bikes, wiping off a days worth of greasy fingerprints and who knows what else.  I was surprised at how yucky the bikes got after a bazillion people got on and off and poked and prodded.

I'm so glad I wasn't the one chatting with these folks.  Unfortunately for the teammate who was chatting with them had the task of cleaning the ick.....Yikes.......I really don't know how I would have handled that situation.  I probably would have barfed and made the mess even worse!

Things began winding down and we still had about 2 hours before close.  That was a LONG two hours.  I did get a few people who wanted to check out the bikes but not  nearly enough to keep me busy and occupied.  The long day was wearing on me and I was so ready to call it a day.  And then...it was time to close up.  Yippee!  I had a great time chatting up peeps and showing off the bikes.  But when things slowed down, my feet cried and my body wanted rest.  It was a long day and by 8:30 or thereabouts, it was time for us to head out to the hotel.

Yet again, I passed on dinner with the crew.  Heck, I was ready for bed.  Well, at least I was ready for some quiet time, alone.  I wanted to check email, Facebook and write my blog.  I don't know how my teammates do it...work hard all day and then go out for dinner and maybe cocktails, getting back to the room at 11 pm or so....  Not me.  I'm a lightweight anymore :-)

So, tomorrow will be an early finish day, around 5pm or so.  I suspect, I will have enough energy to actually go have dinner with the rest of the crew :-)

It's been fun so far and I'm ready to do it again.  Let's see what tomorrow brings.  I hope I can get a bit of time to go explore the other exhibitor booths and get some great pictures to share with you.

Several folks have sent me hints about shoes and feet issues and it has all been helpful.  That - my feet - has been my biggest issue and one that I will get sorted toot sweet (quickly for those who don't know what toot sweet means :-) )

Thank you again for following my little escapade!  Tomorrow will be yet another adventure.