Today is the day I start my new adventure!  I'll be representing BMW at the International Motorcycle Shows.  I'm totally pumped about this new gig and am looking forward to learning a lot and meeting new peeps.  Just think, I'll be surrounded by all kinds of bikes and accessories and interacting with people who are interested in the same thing.  Oh yeah, baby, I'm excited about this!

I got up this morning at 4:00 am.  Yikes!!!  The last time I saw 4:00 am was during the 2011 Iron Butt Rally.  I managed to drag myself out of bed and grab a cup of coffee before getting dressed and ready to head out.  Eric took me to the airport and I was able to check-in with no problems.  The TSA didn't like my breakfast yogurt so I had to go back out of the secured area and eat my yogurt before I was allowed to pass through security again.  Oh well, at least I had my brekkie :-)

My flight was scheduled for 6:15 am and we took off out of the St. George, UT regional airport with no problem.  An hour later I was in Salt Lake City making my way to another terminal to catch my flight to Phoenix.  Funny thing happened on my way off the St. George flight...I was walking along the corridor toward the next terminal.  There was a man on my right with his cell phone out.  He was staring at the cell phone and punching buttons and not watching where he was going.  I saw the hazard he was headed for but he didn't because he was too engrossed in the cell phone offerings.  I almost peed my pants when he ran into a railing.  He walked right into it and probably crushed his family jewels since it was just that height.   Hahahahaha, he tried to not scream but he did squeal and looked around sheepishly.  He caught my eye and I just said he should pay more attention to where he is walking.  He put the cell phone away and limped off.

The flight to Phoenix was full but again, no issues and I arrived in Phoenix ready to start my new adventure - BMW representative at the International Motor Cycle Show ("IMS")!!

My boss, Moira came to the airport to pick me up along with the other folks who would be working the BMW booth.  I met Brad, Evan and Sonny (each with their own story which may or may not be divulged over the weekend!).  All these guys and Moira had manned the BMW booth at the opening IMS in San Mateo, CA last weekend.  I am the newbie.  I'm also old enough to be their mother except for maybe one and then I'm old enough to be his much older sister, lol.  No problem, I'll wear make-up tomorrow.

So after introductions, we all squeezed into the car and headed over to the Hertz lot to exchange the car for something bigger.  That took a bit of time.  Finally, with a decent sized car we went in search of food.  Lunch was pleasant as we all got to know each other a bit better.  There is some really good, quick wit with this group.  And, some very experienced riders!

After lunch, we stopped by our hotel, checked in and got sorted and then went over to West World, the venue for the IMS.  It was a busy place with all the vendors and exhibitors setting up their booths.  Here are some not so good pictures.  Guess I was excited and didn't hold the camera still enough - I'll try to do better tomorrow :-)

The parking lot was filling up with semi's full of motorcycles and bits and pieces. 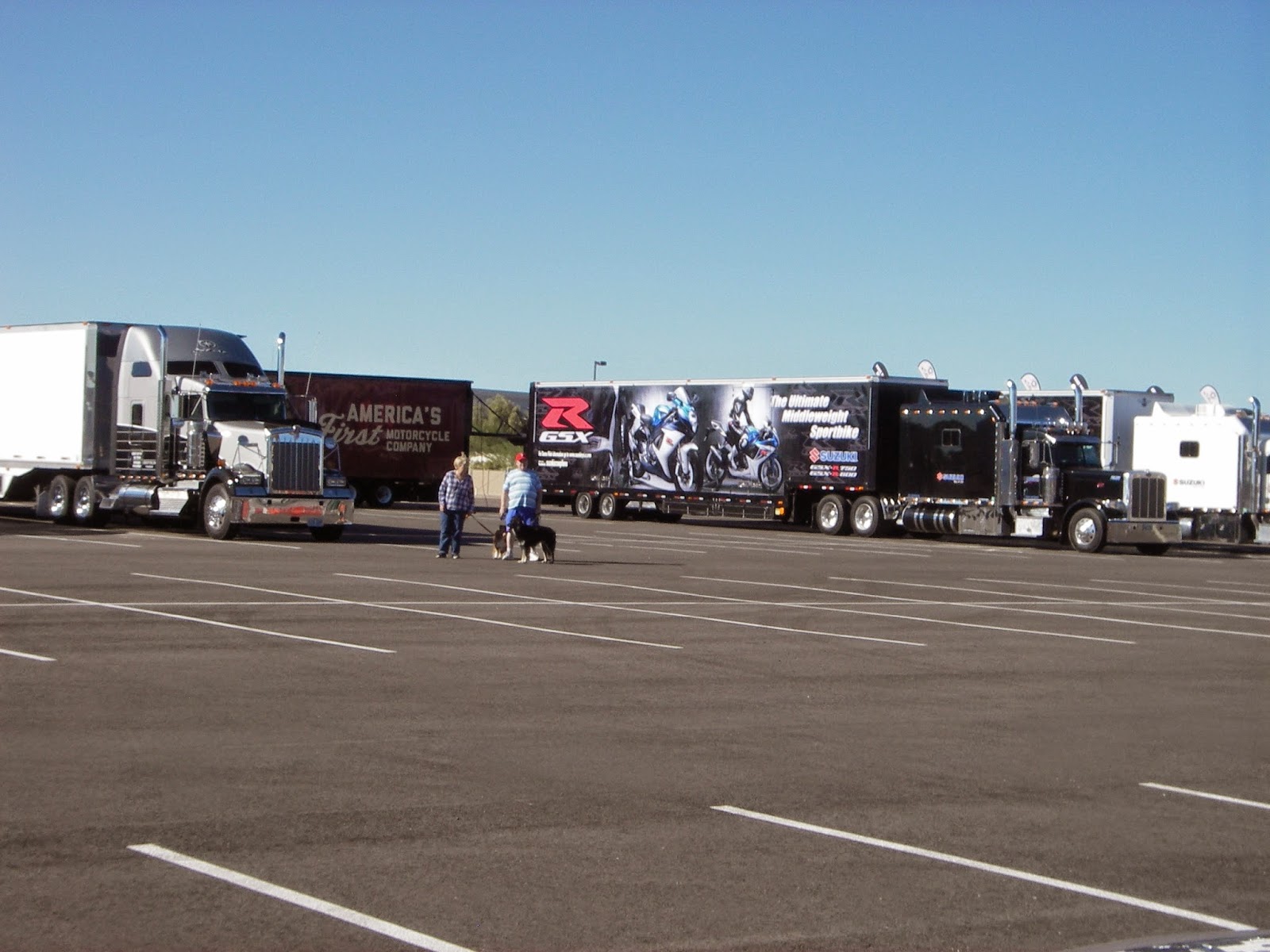 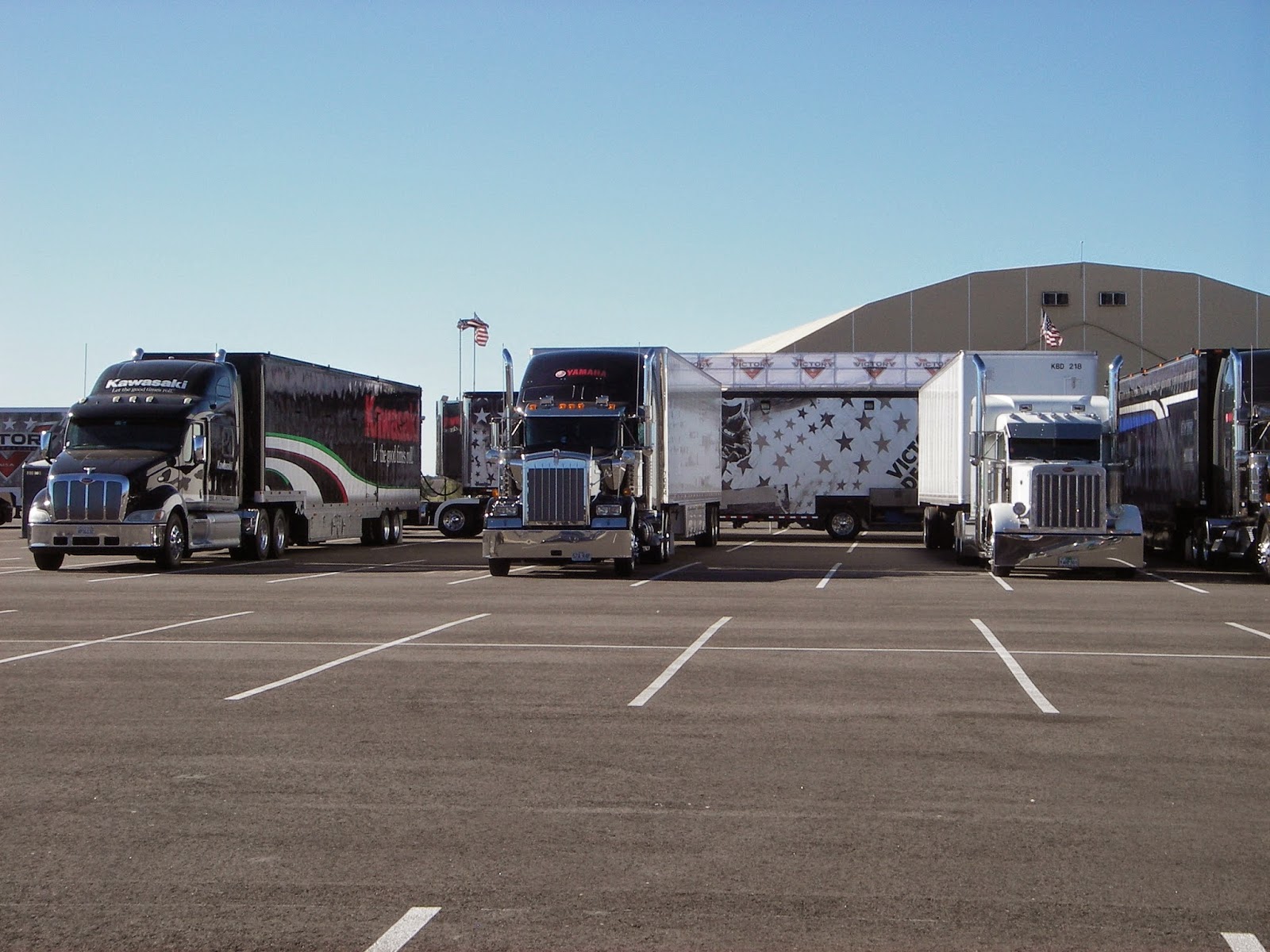 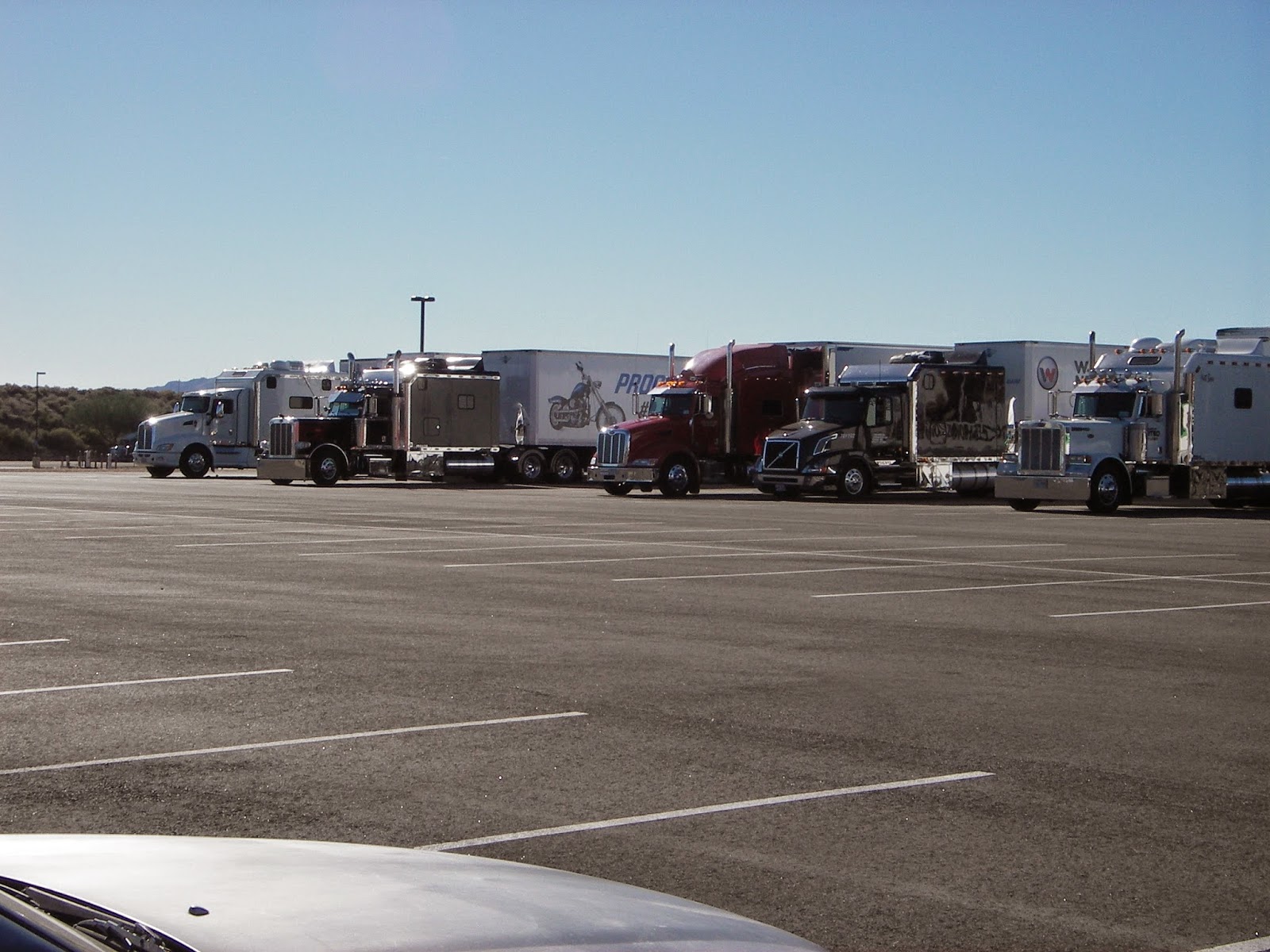 Here is Brad (left) and Evan (right) who I'll be working with.  Brad is from Tennessee and Evan from Texas.  Sharp dudes with a quick wit and a great knowledge of BMW's. 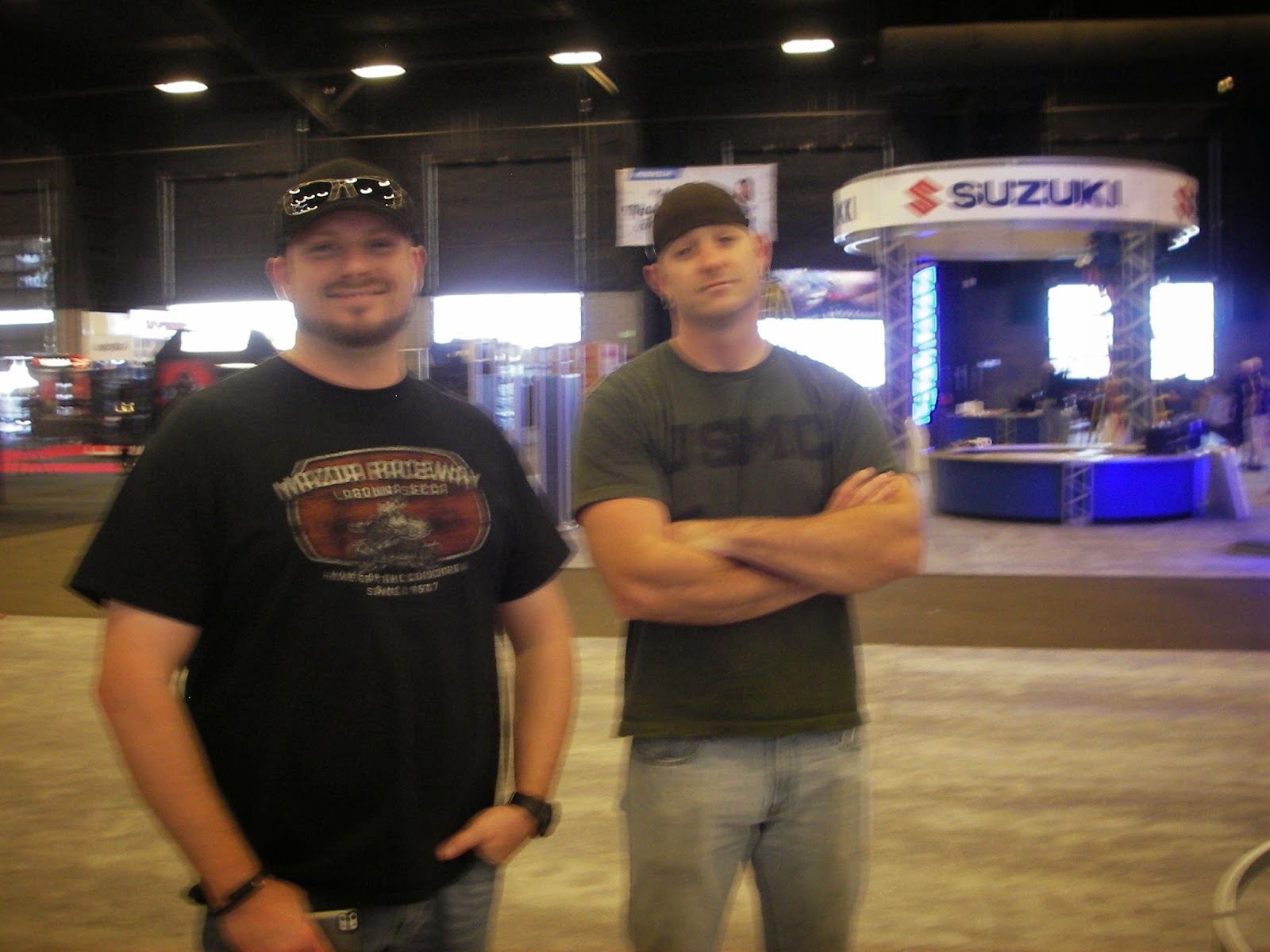 This is our booth - vacant and waiting for us to fill it in and get everything displayed. 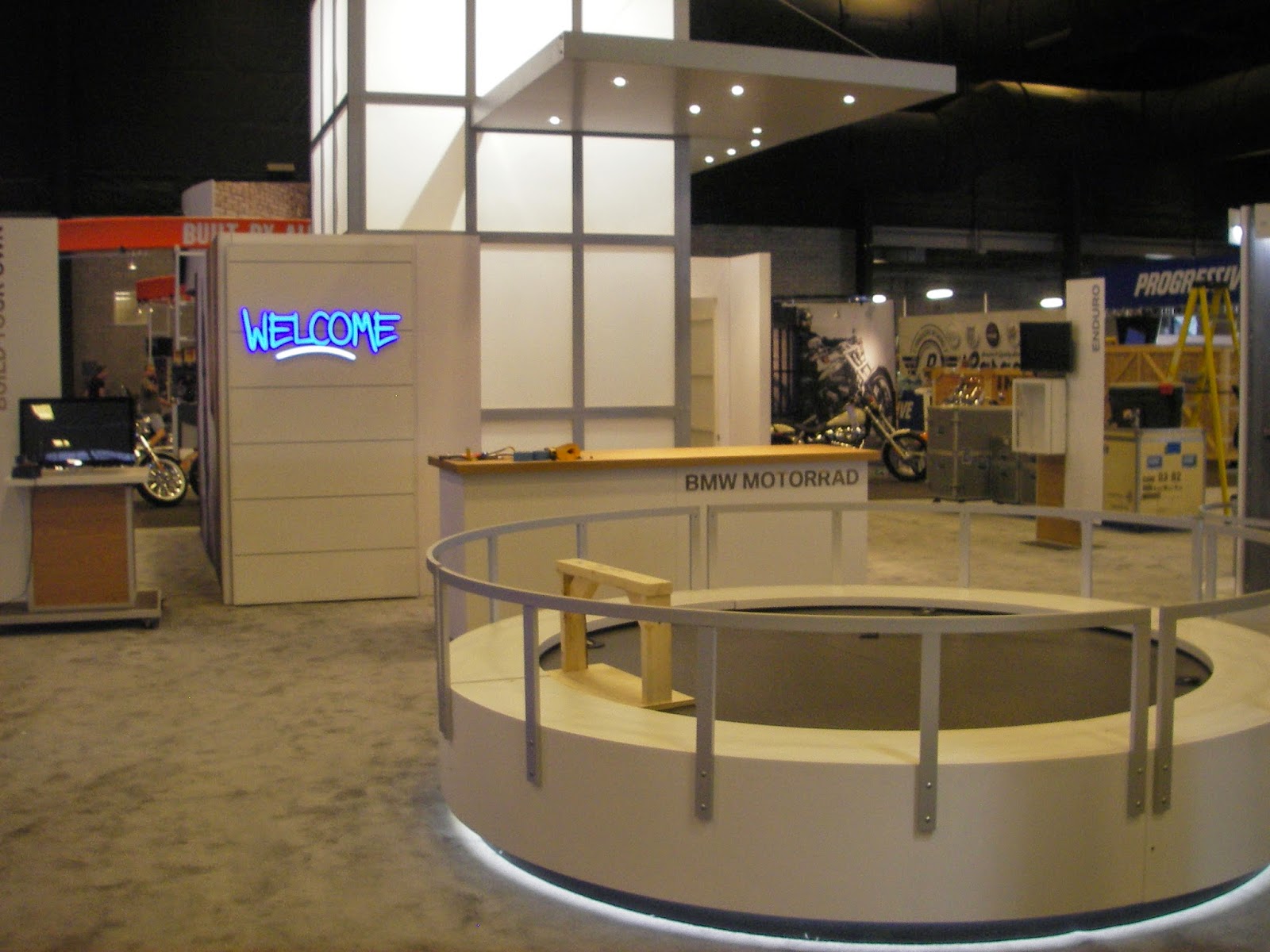 I took a few minutes and walked around the exhibition hall.  Everyone was in various stages of setting up.  It was a beehive of activity. 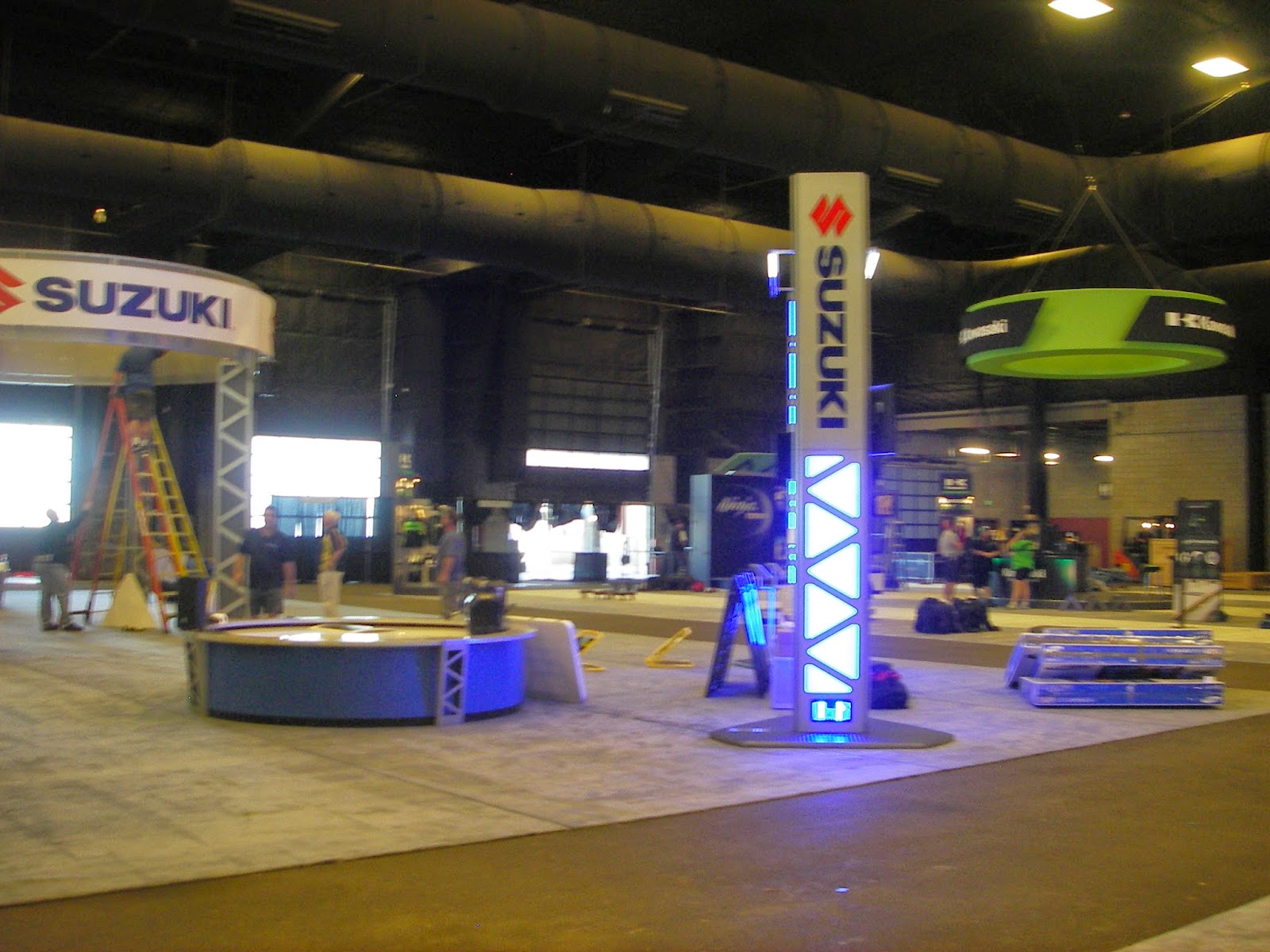 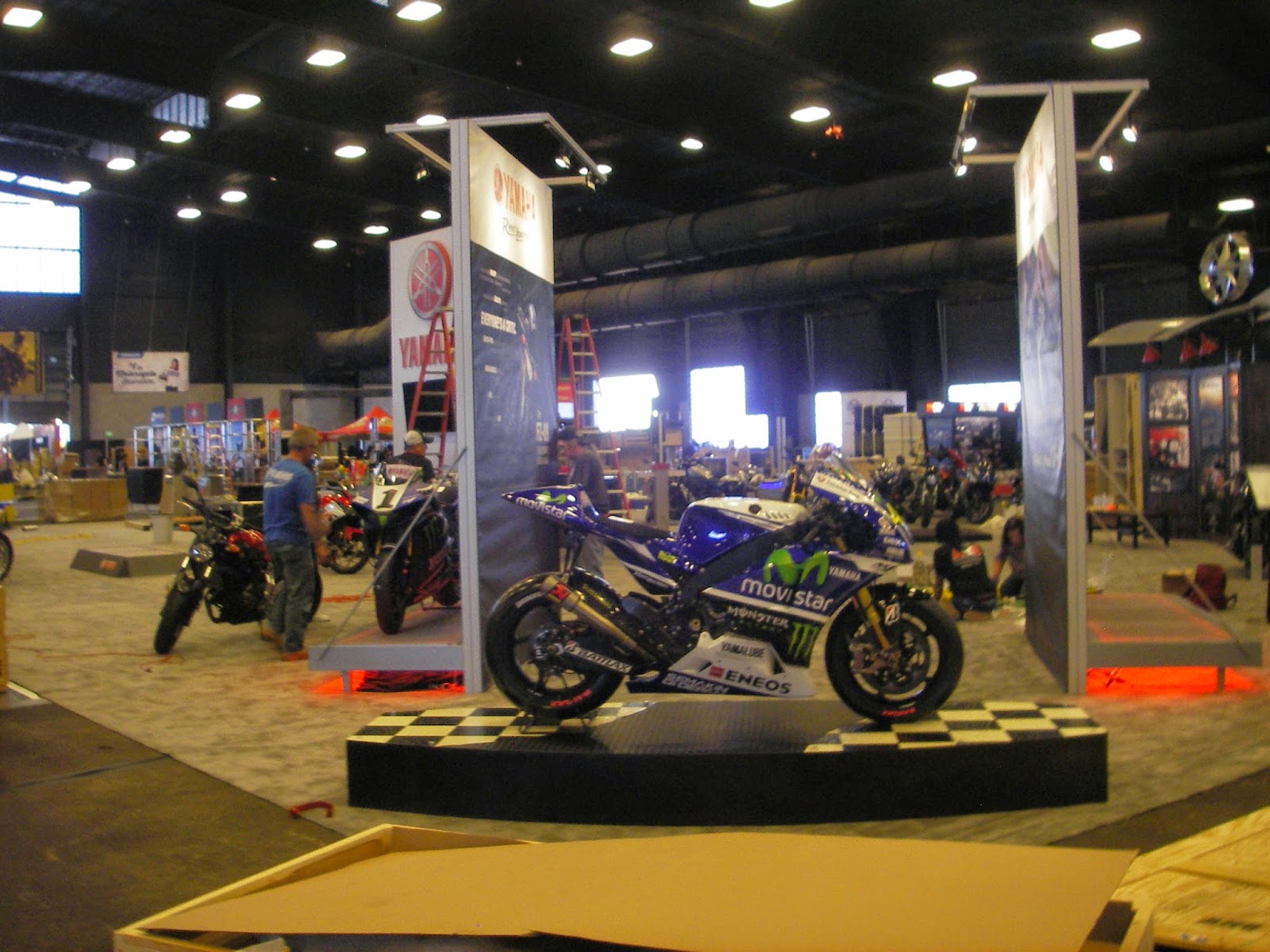 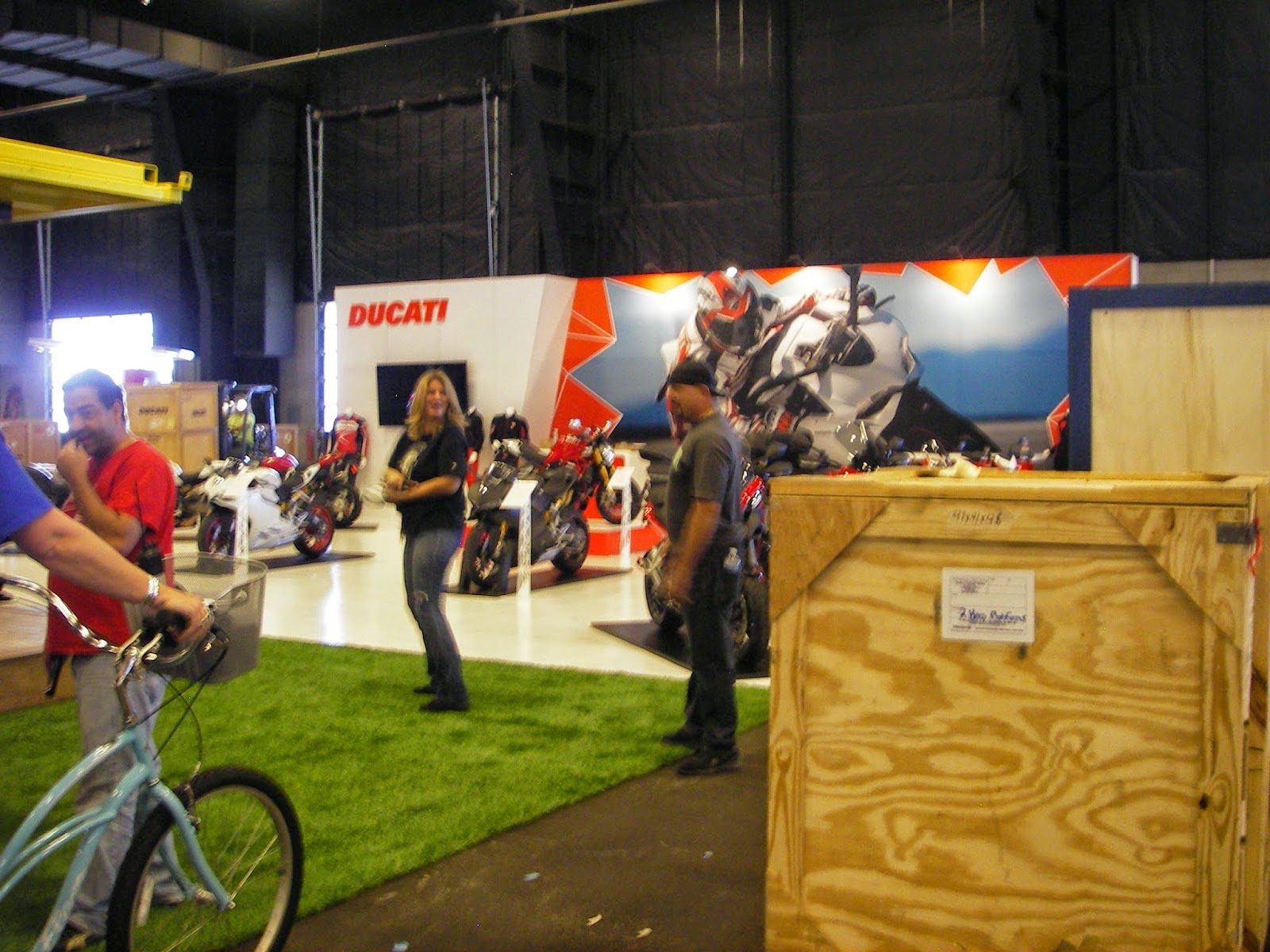 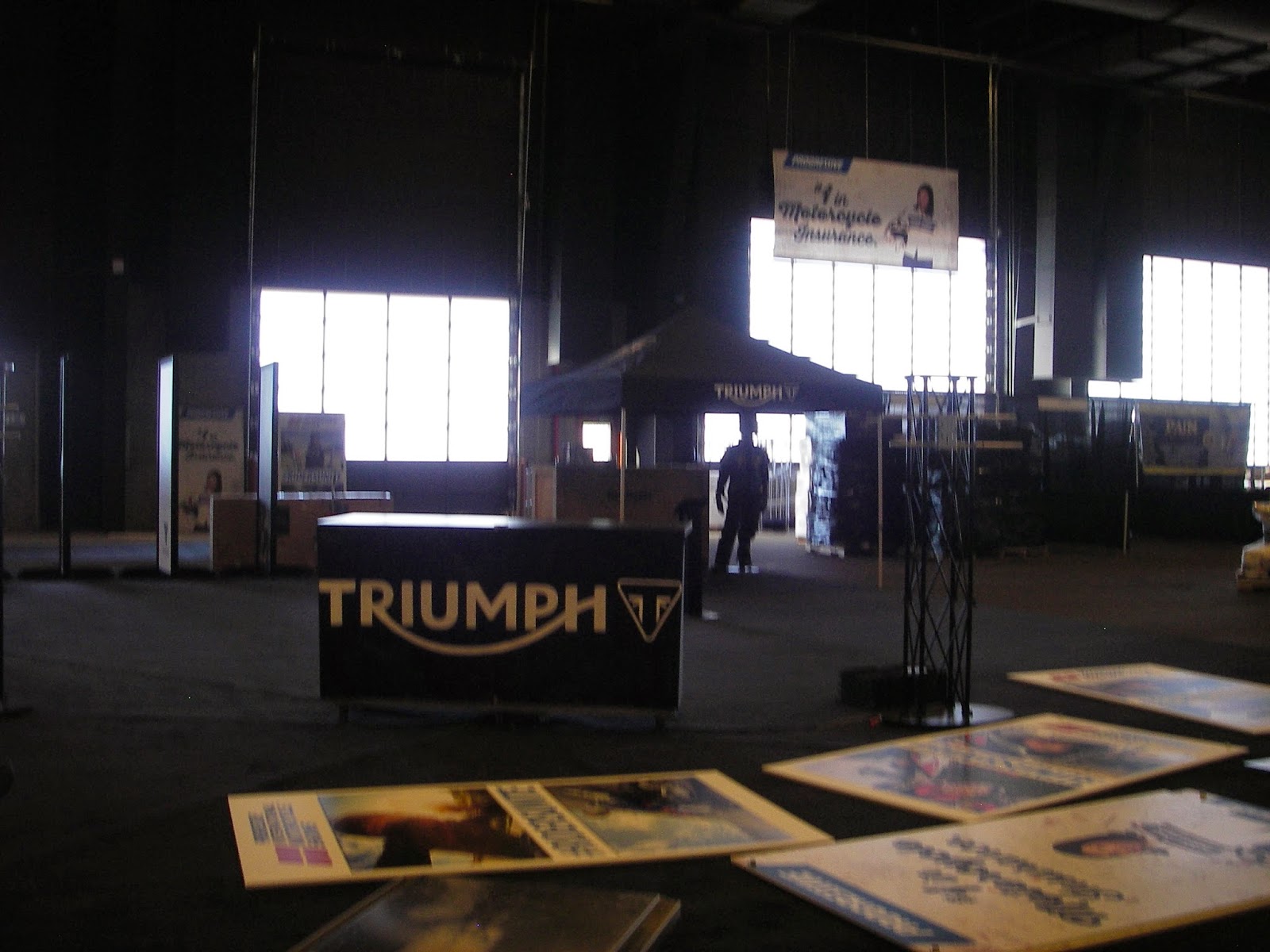 They will have live music during the event.  I heard rumor that it wasn't so great.  We'll see tomorrow. 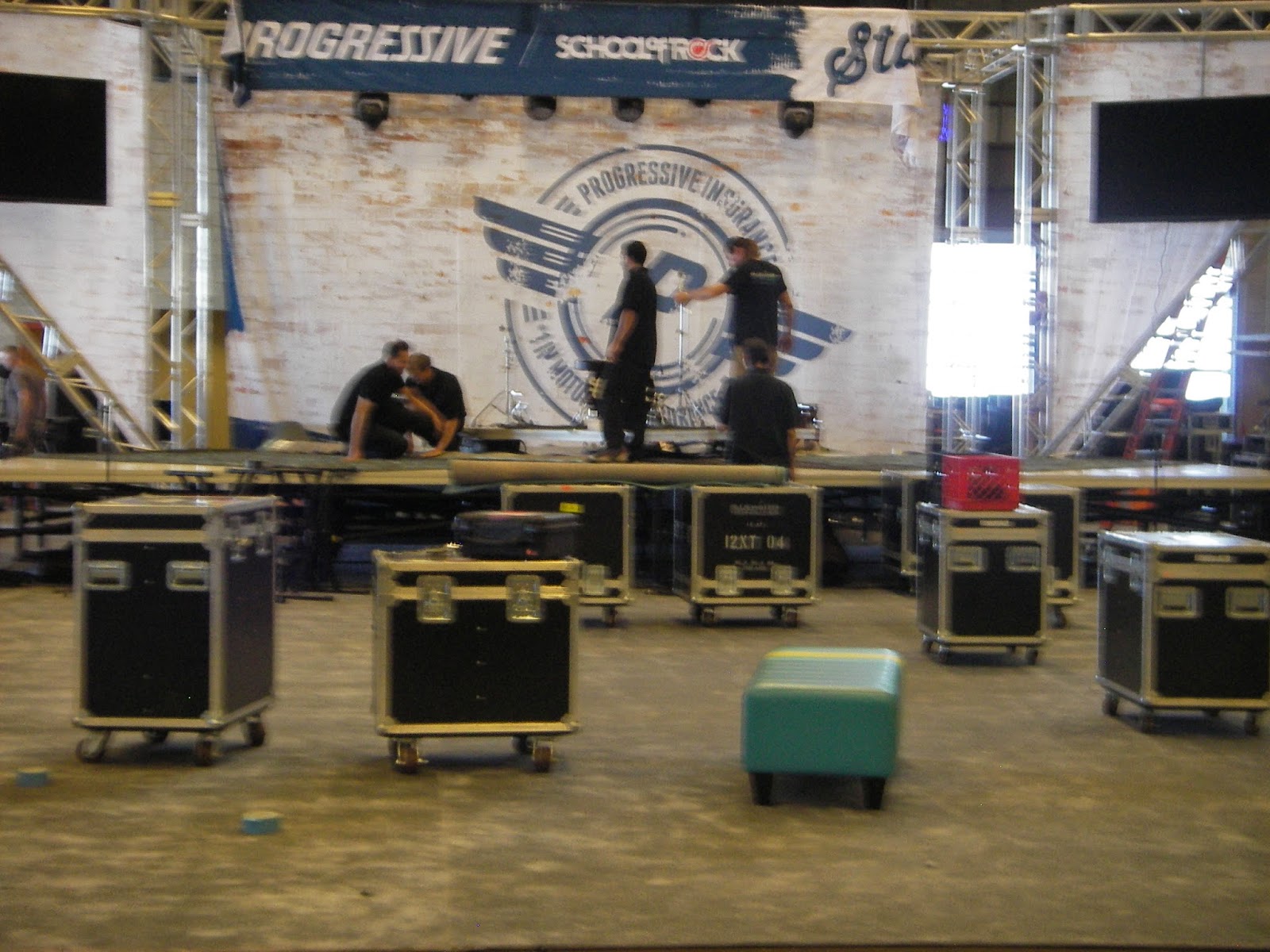 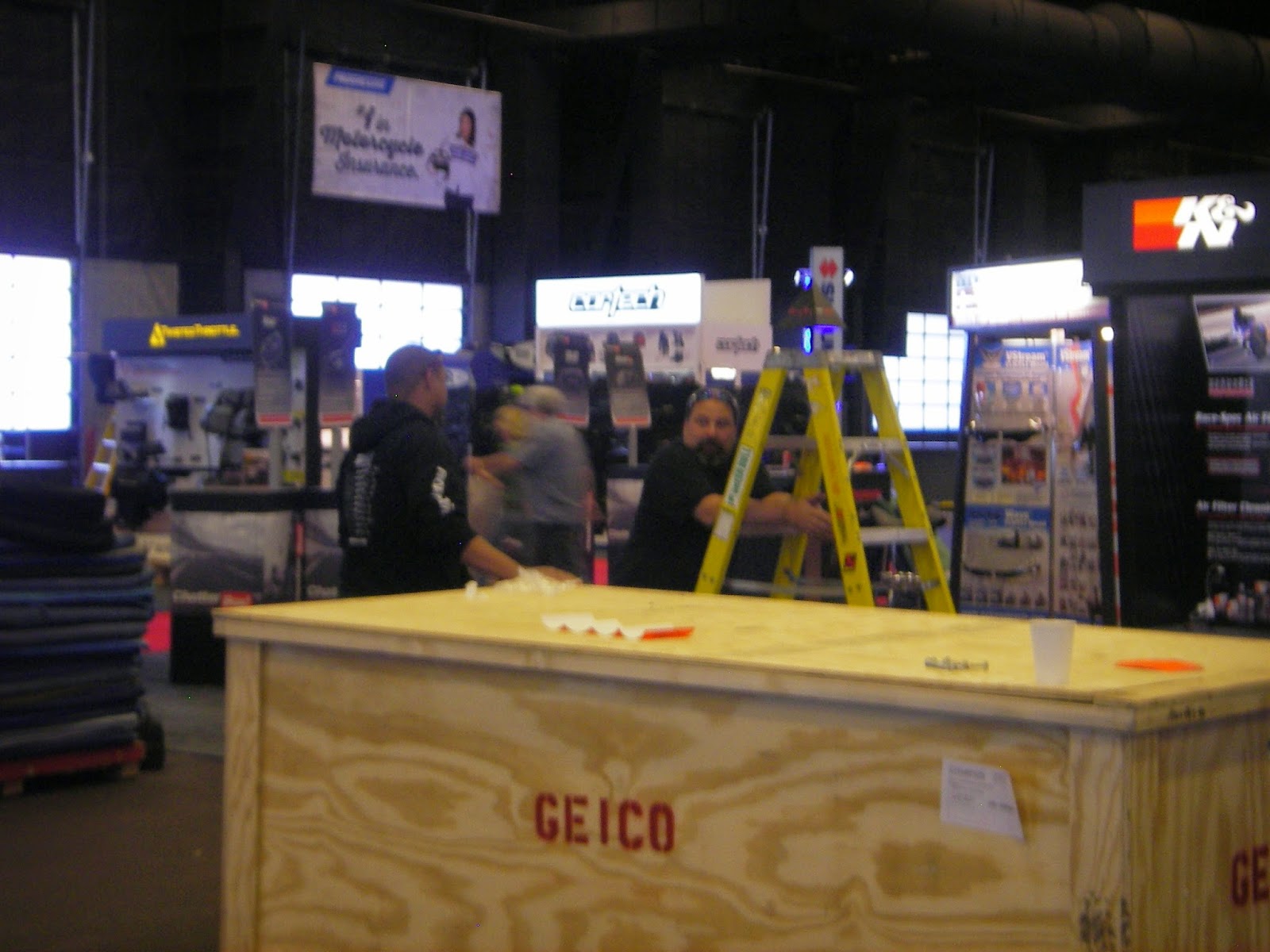 Harley Davidson is right next to us. 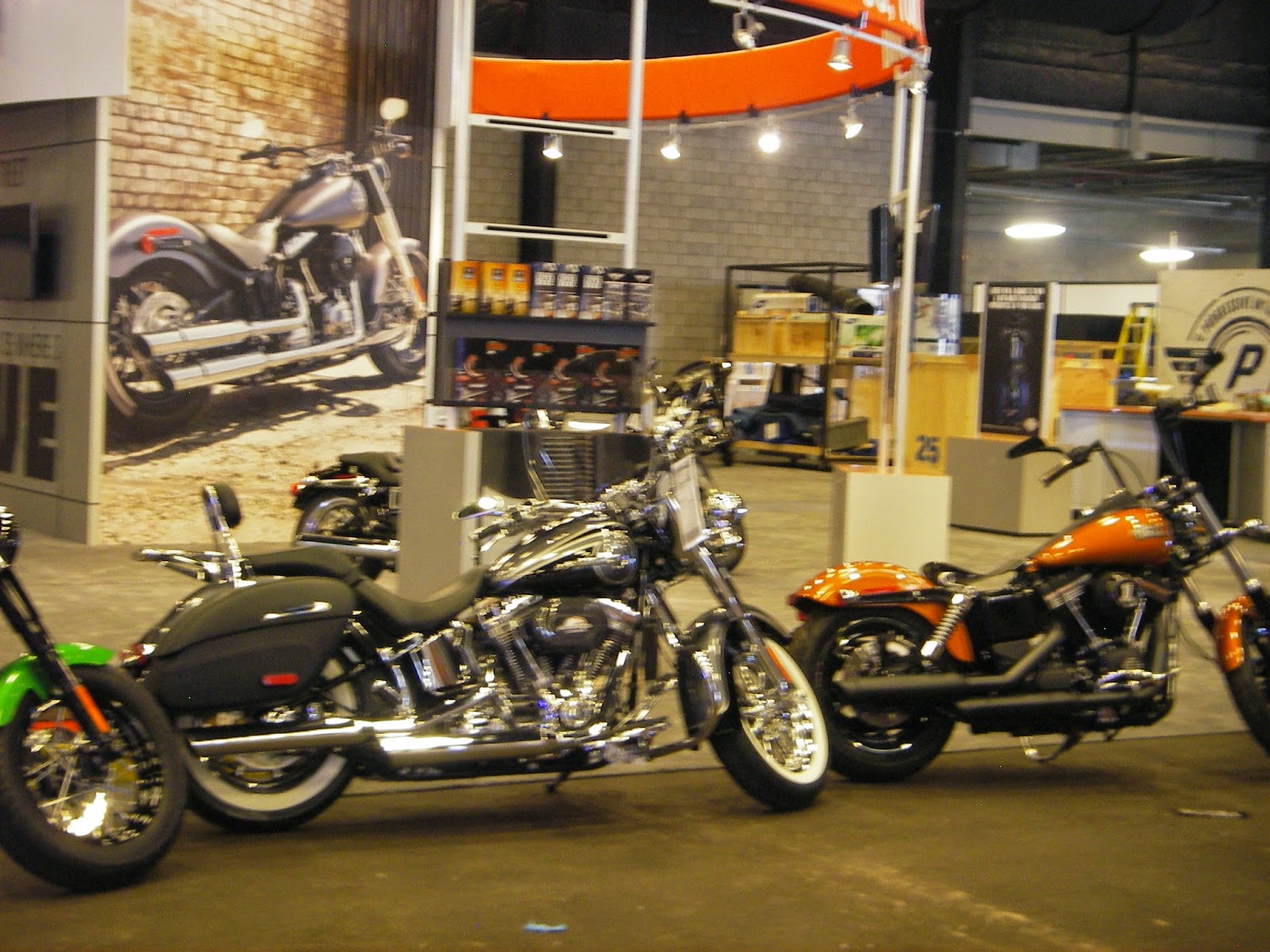 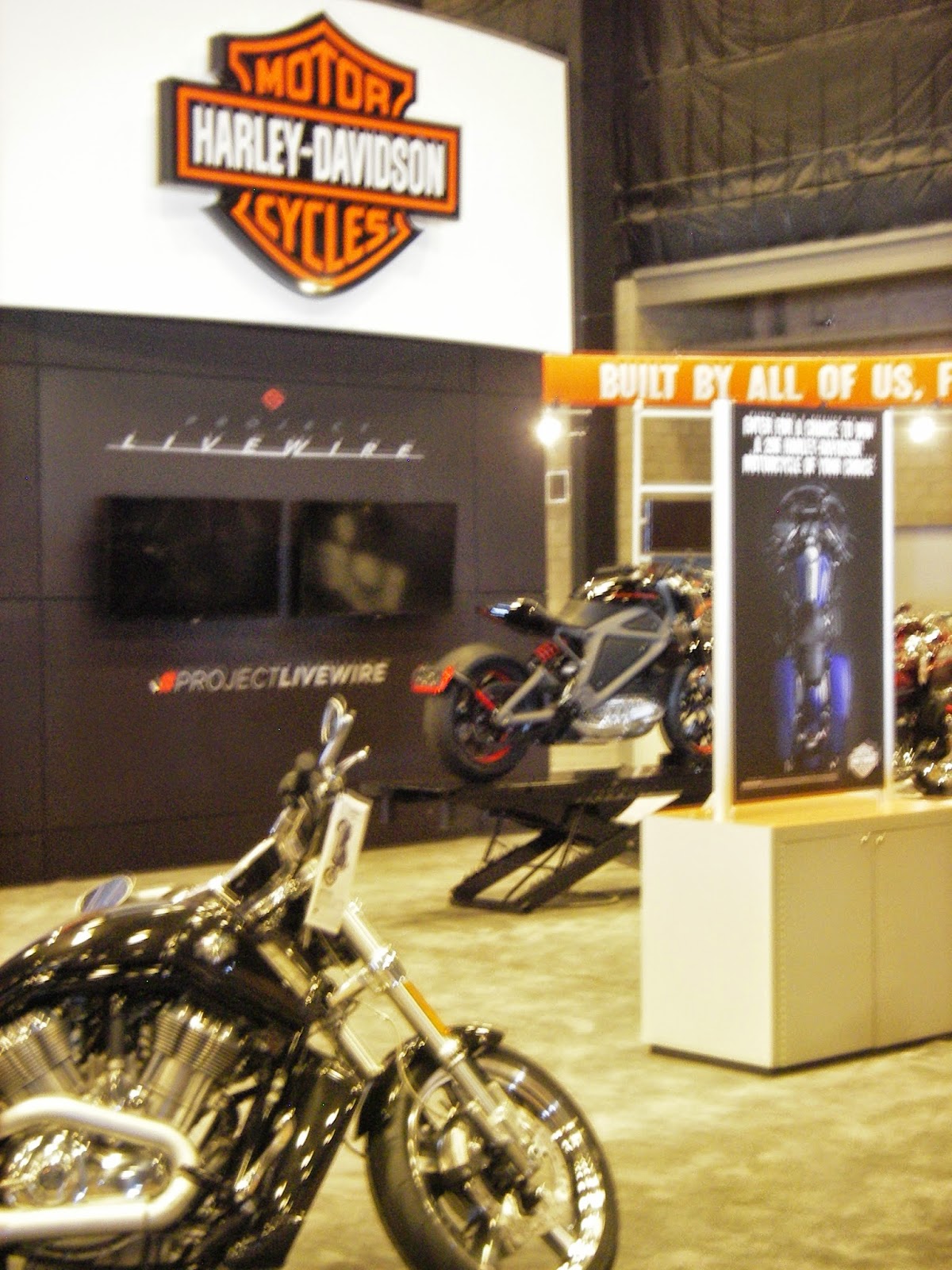 After my stroll around, our bikes arrived.  Now, here is an interesting tidbit - the labor to unload and move bikes and to install the exhibits is all union.  We can't touch anything until the bikes are at the carpeted area.  Don't want to tick off the union :-)

So, our bikes were unloaded and pushed to our exhibit by union workers.  From there the BMW team took over, placing the bikes in the proper positions, making up the display cases and dressing the mannequins.  I had a lot of fun with the display cases.  Working with Moira we came up with some nice, creative displays for each group of bikes, Enduro, Roadster, Sport and Touring.

Here is our trailer full of goodness! 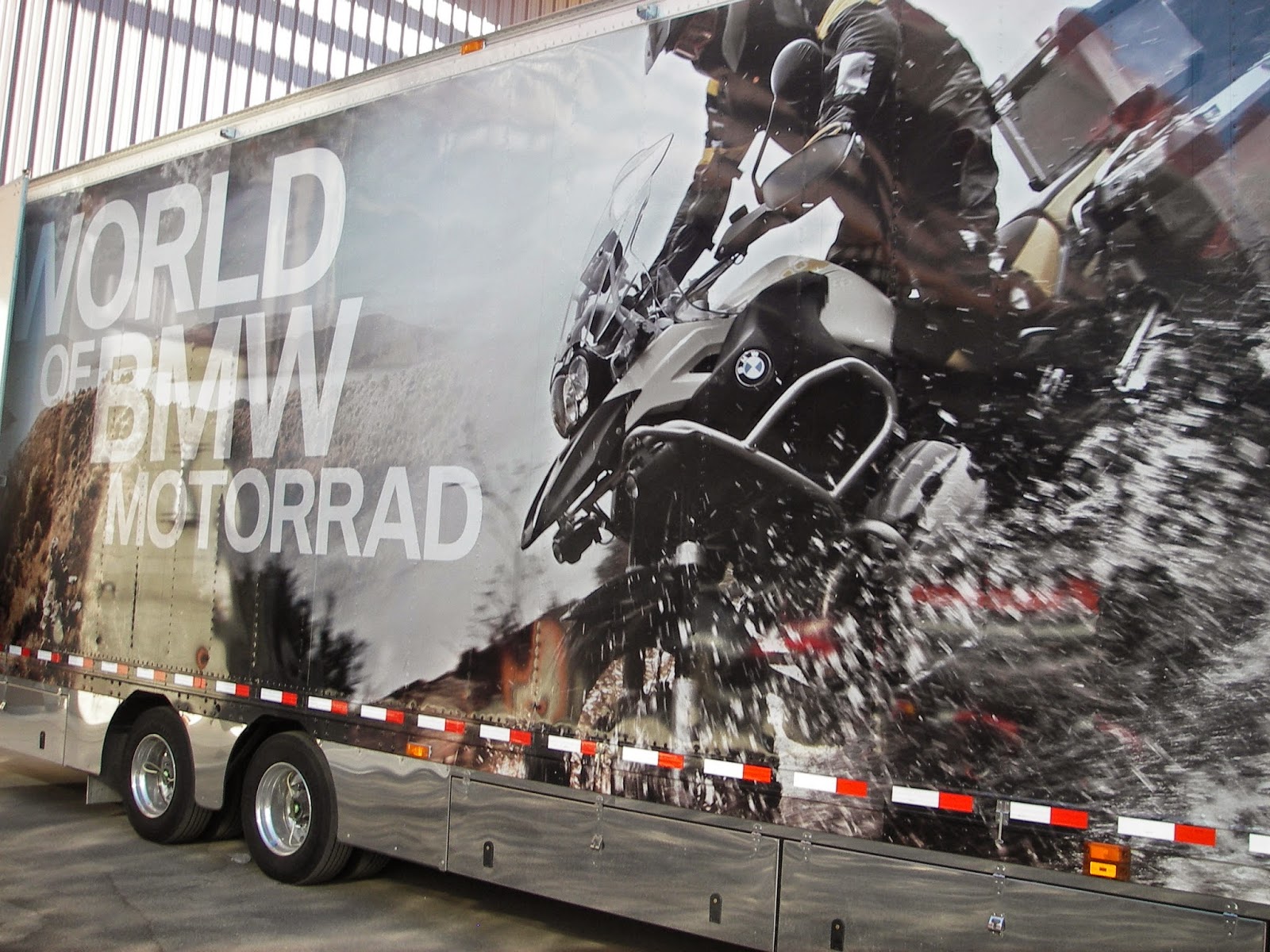 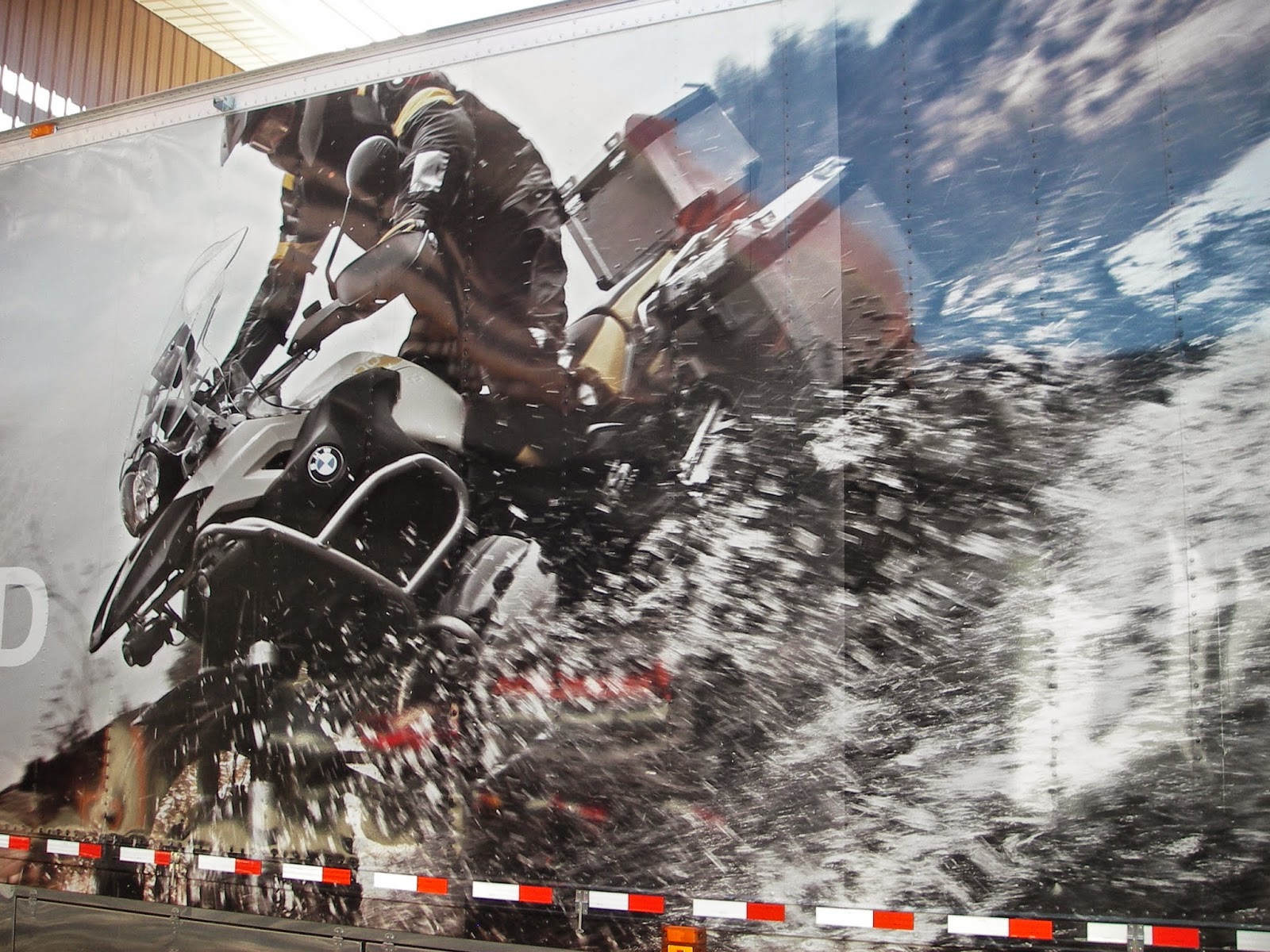 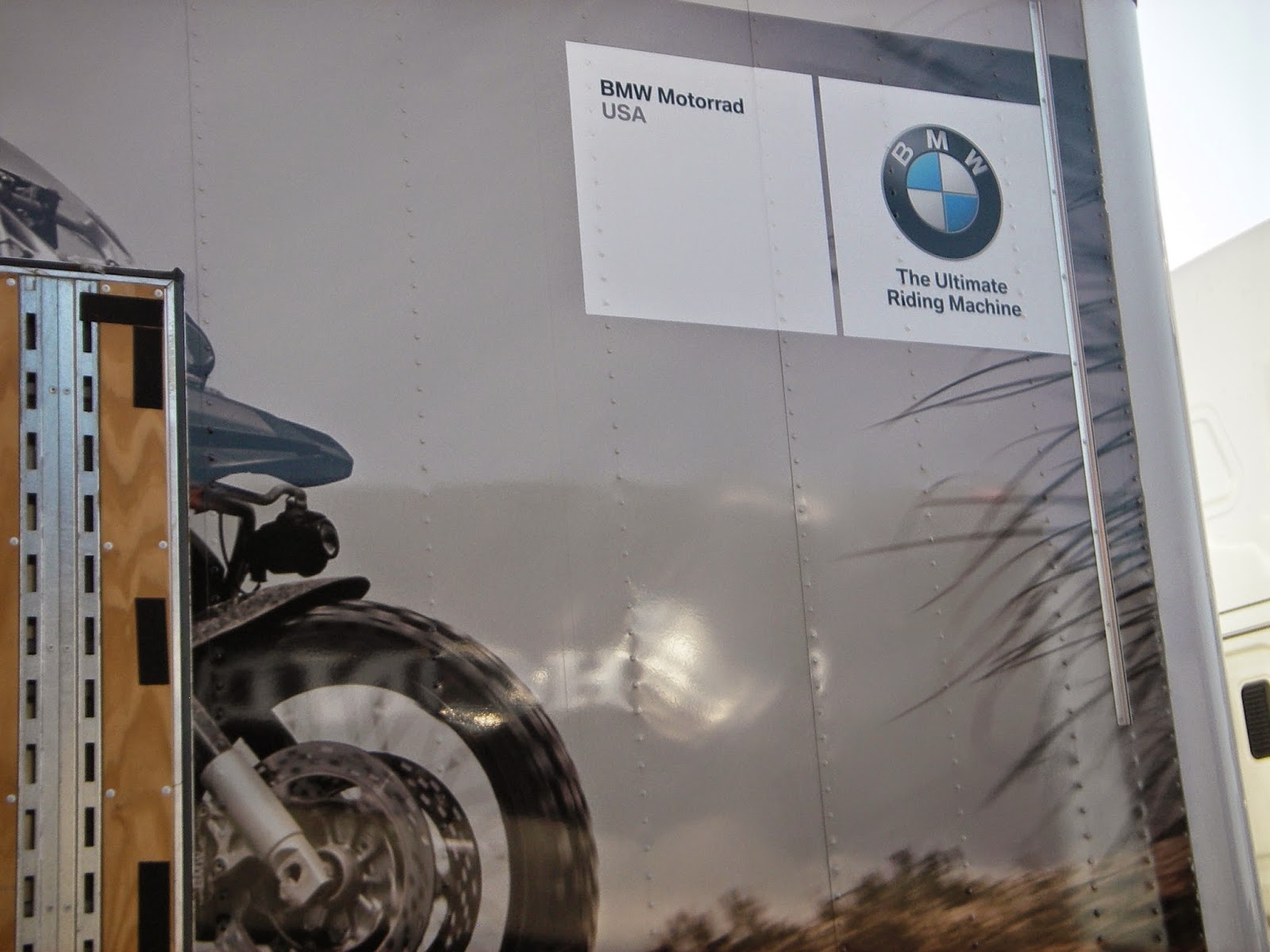 While out in the parking lot, I spied this bike.  Who is it?  I have a good idea but will verify and let you all know later.  Those pesky Iron Butt riders are everywhere :-)  Hahahaha, as we walked past this bike one of my co-workers said, "Is that a car tire on that bike?"  I laughed and said "well, I do believe it is."  You darksiders, and you know who you are, cause all kinds of chaos ;-) 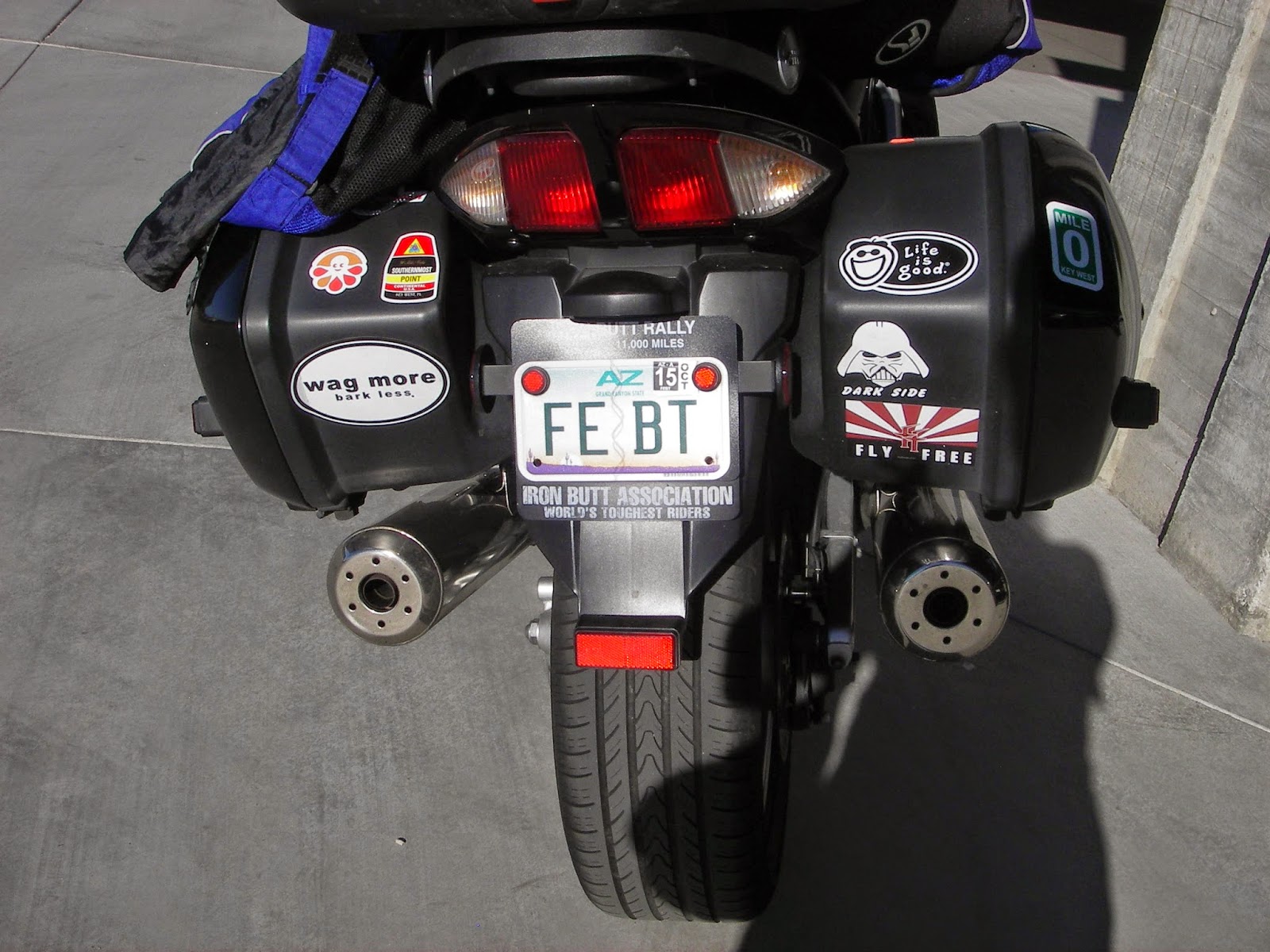 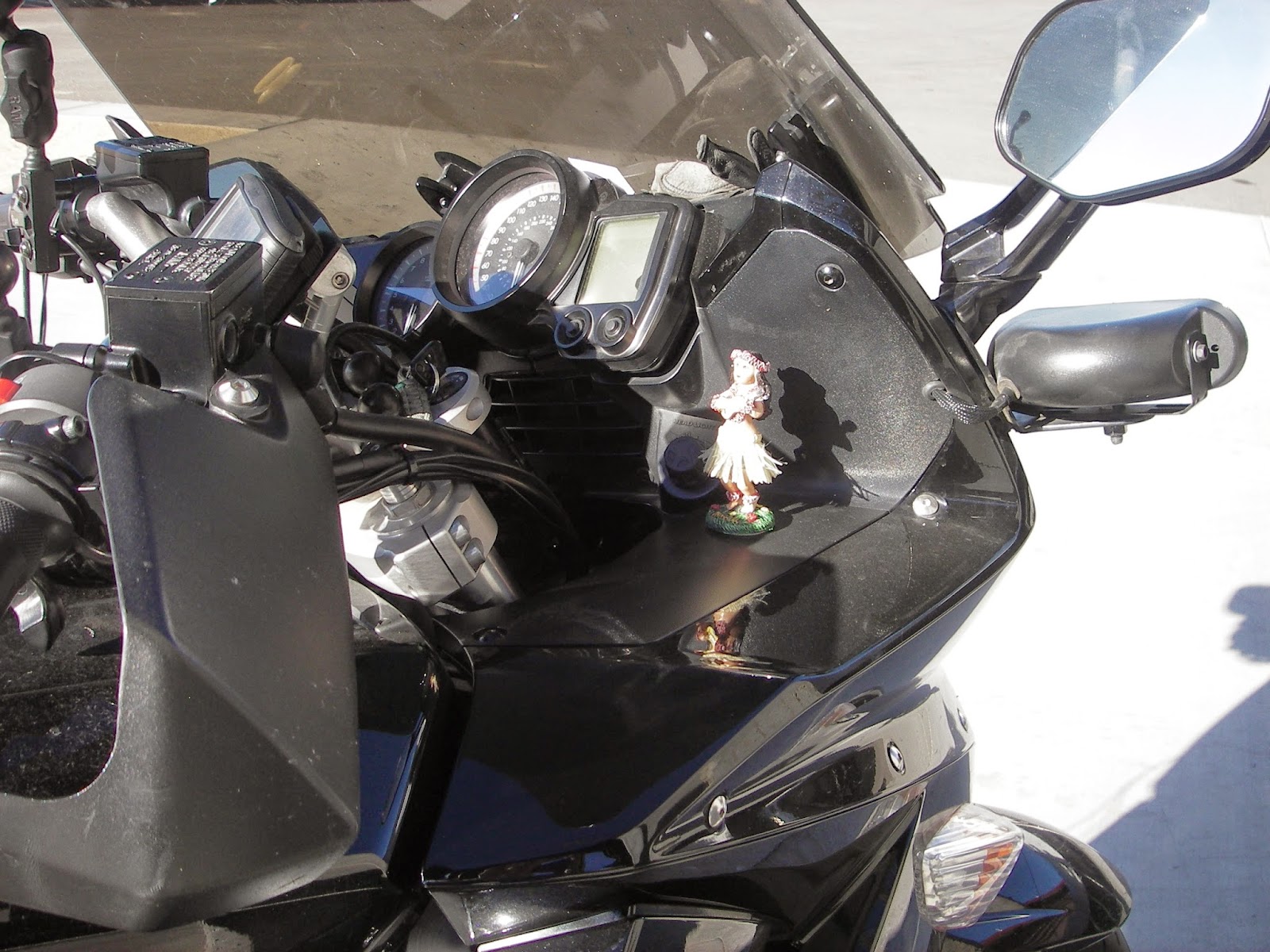 As the bikes rolled in, it started to look like a real exhibit.  I was ooing and awwing over the bikes.  And yes, I climbed on quite a number of them.  My favorites, the GS line of bikes. 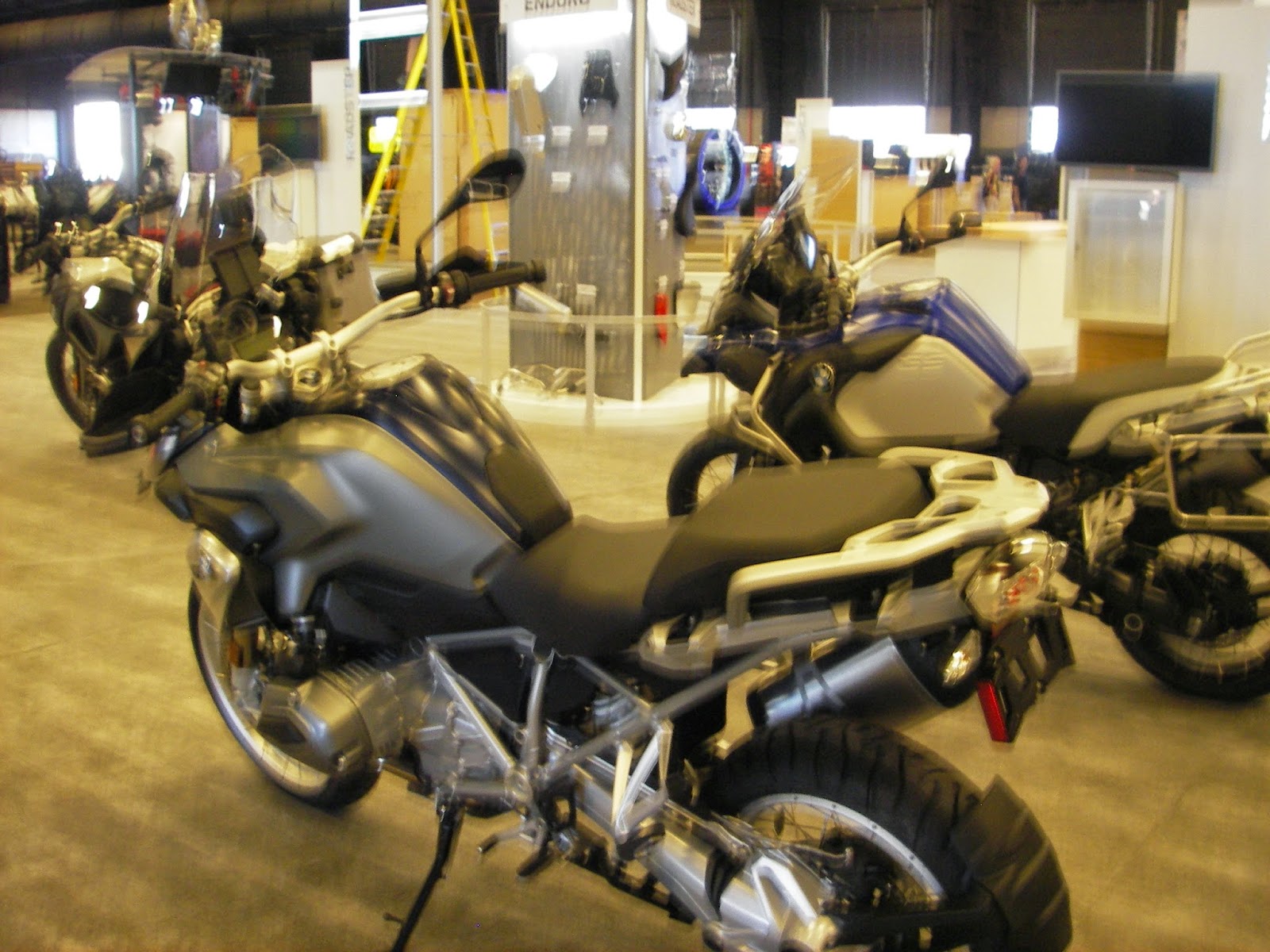 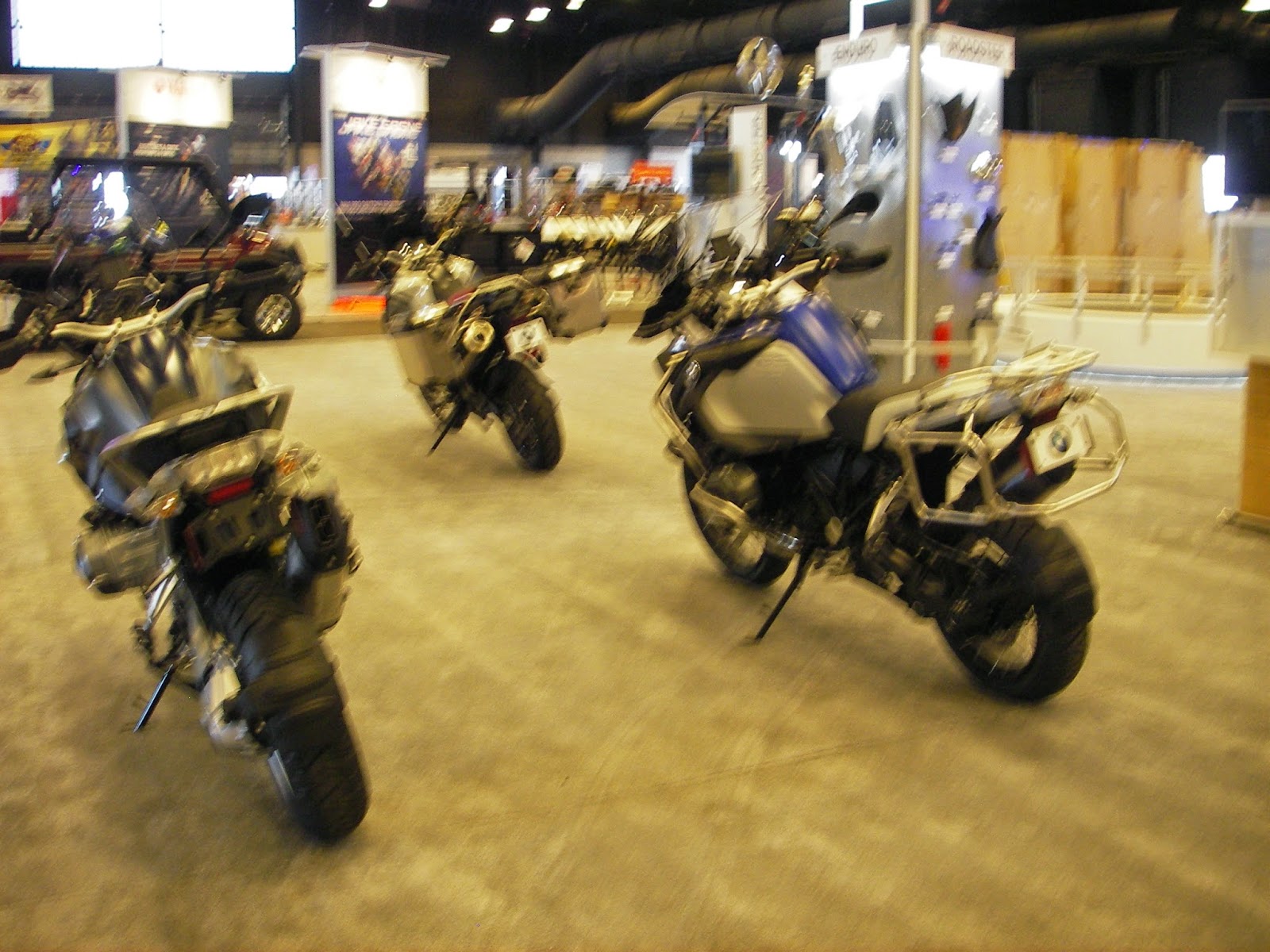 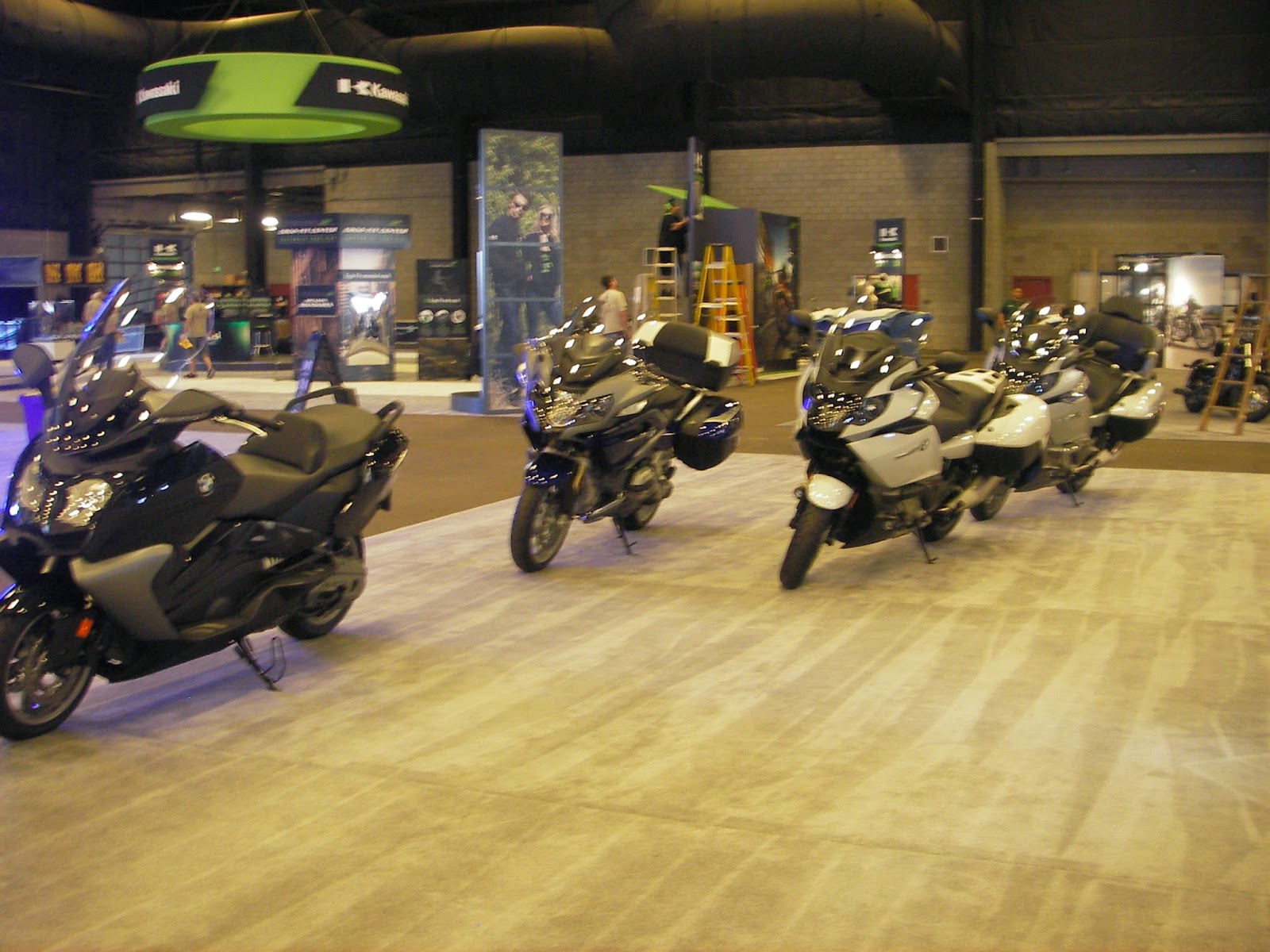 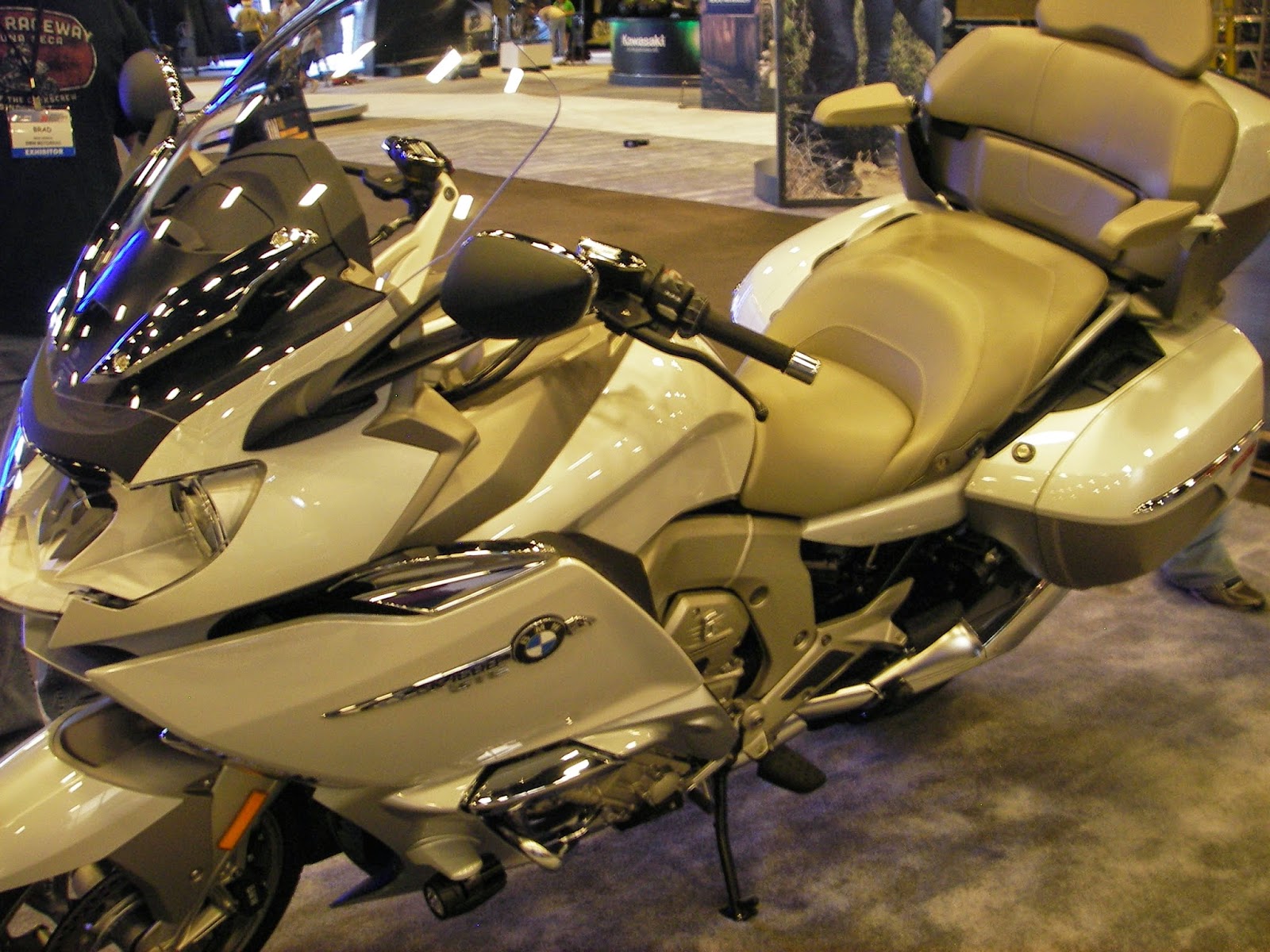 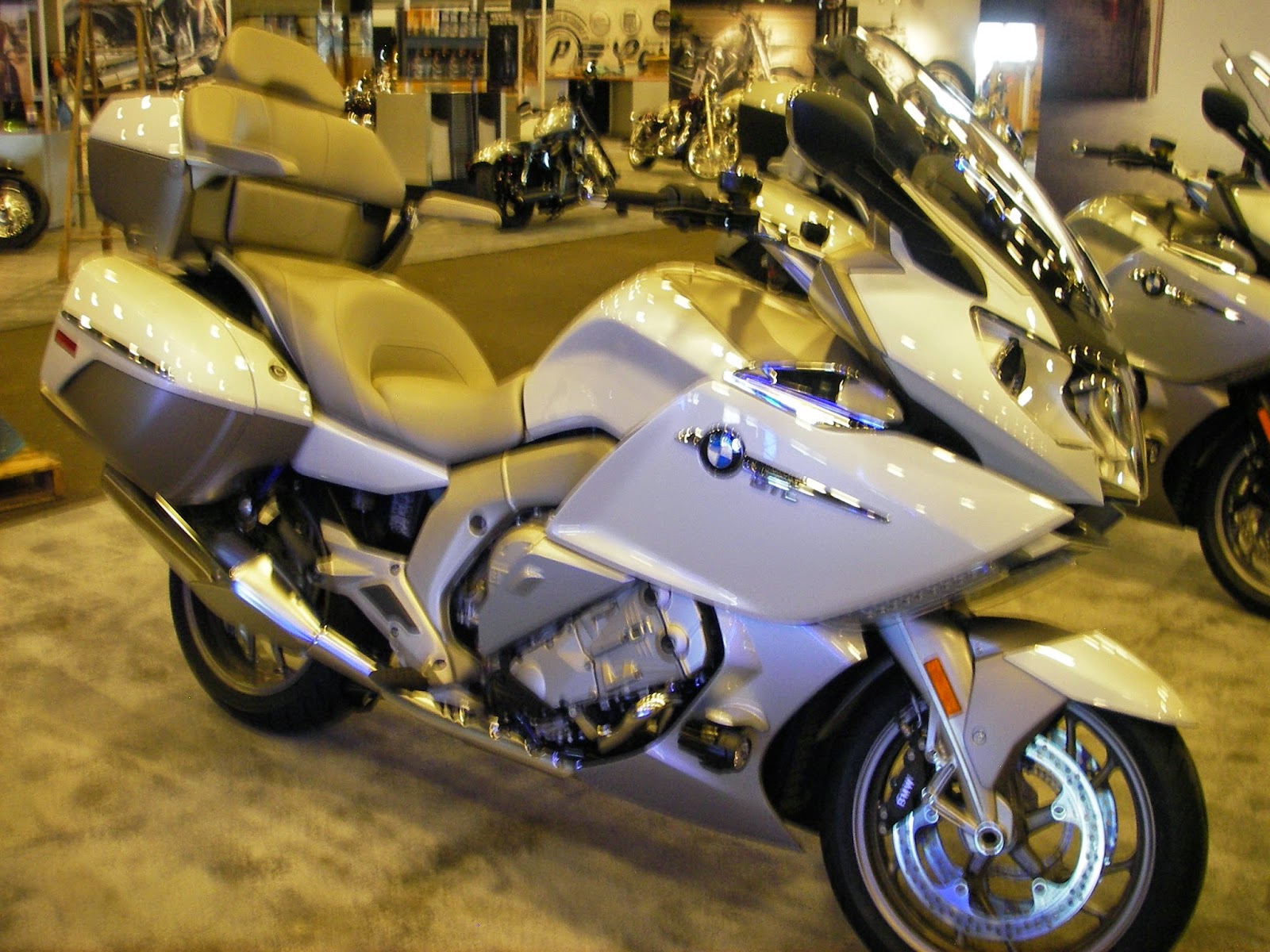 At this point things got busy for me.  Meeting more new people, sorting out the displays, getting tutored on the fine points, etc.  I also got tired.  I'd been up since 4:00 am, remember?  Then I had to engage brain and remember names, nomenclature, horsepower, options and on and on.  Yup, I'm tired and my feet hurt.  We finally headed back to the hotel.  It was heaven to take off my shoes.  I haven't worn close toed shoes in ages and ages other than my riding boots.  My tootsies were screaming!  It felt so good to take them off and get my feet into flip flops.

I declined going out for dinner because, well, because I wanted to a write my blog and just chill for a bit.  My hotel room is awesome.  I'm at a Springhill Suites by Marriott and I have a desk area, fridge, microwave, sofa, flat screen TV and a king size bed.  Nice :-)  I brought some easy microwave food since I had already scoped out the accommodations.  So tonight, it's dinner in the room followed by a long sleep.

Tomorrow I will spend the morning in a training session and the show opens at 1:00 pm.  I'll work the show from 1:00 pm to close which I think might be 8:00 pm or so.  Saturday is a long day and then Sunday will be a half day plus packing up.

I'm looking forward to seeing some of you at the show!  Come on by, check out the new BMW's and chat me up :-)