Oh boy, did I sleep well last night!  I was beat up from all the skills exercises and the heat.  Yup, I was in bed by 9 pm and sound asleep by 9:01 pm.  As a matter of fact, both Lydia and I returned to the motel room and decided to not go back to the Rodeo Grounds for dinner.  Instead, Lydia went to the Drive by Pie place and bought us each a slice of pie for dinner.  Isn't life grand? 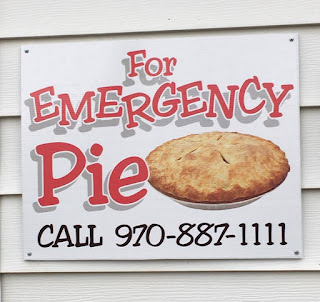 So today was another clinic for dirt bike riders and those who weren't at the clinic had the option of riding a scavenger hunt or doing their own thing.  I decided to do my own thing until the late afternoon classes were to start.  First off, I geared up and rode back to the Rodeo Grounds for a one on one session with Louise and Kandi.  I really needed to practice those turns more.  So, that's what I did.  Funny, I quickly realized that although I had a good night sleep and my body wasn't sore, I was still wore out.  I didn't take many turns for me to call uncle.

A photo of me and Ruth Belcher.  She is definitely the life of the party, a great rider, and a super good person!  So glad I got to finally meet her in person :-) 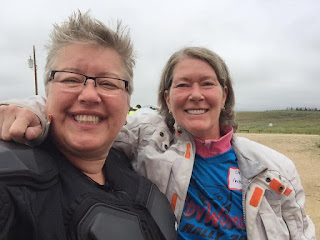 A pic of me with Louise and Kandi, my instructors who were absolutely fabulous!!!  Thanks so much for taking the time with me and being patient.  I learned a ton and found a new confidence on the Beastie Bike! 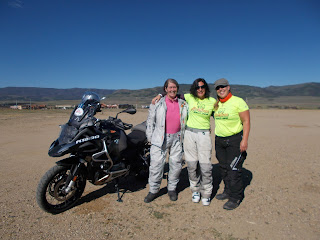 One of the few guys who participated in the clinics with Louise and Kandi.  He was the only Ducati rider. 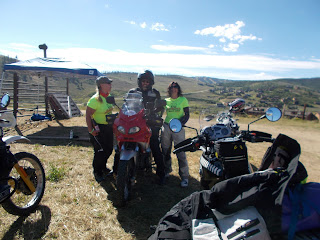 After a few turns at the Rodeo Grounds, I decided to take a ride-a-bout to Rocky Mountain National Park and over to Estes Park for lunch.  Before I headed out I noticed a warning light on my dash.  Hmmm.....so I called Harrison Eurosports and spoke with Troy, the sales manager.  I told him that I had put the bike into Enduro Pro mode and turned off the ABS for my ADV clinic and this morning, I had put the mode back to Rain and turned on the ABS but still had this warning light.

Hmmm....we tried a few things in the parking lot but nothing worked.  The warning light was telling me that my traction control was not engaged.  So, I asked if I rode the bike with the light on, would I cause any damage.  He said no, but not to be a hooligan and get too aggressive!  Hahahaha, like I ride that way :-)  Anyway, I took off for the Rocky Mountain National Park and on my way, tried to re-engage the traction control.  Eventually, I hit the correct sequence and the light went out and now I had both ABS and traction control engaged.  Yippee!  Now, I can be a hooligan :-)

Well, not really because the speed limit was between 35 and 45 in the park and there were plenty of rangers out to make sure nobody got crazy.  Dang, I wish they would also do the opposite and stop those going 15 mph with a white knuckle grip on the wheel and slowing down to 5 for every curve on the road!  Oh well...

I did have a lovely ride.  I stopped here along Granby Lake for a photo op.  It was a beautiful day, the sky a perfect blue and the water looked inviting. 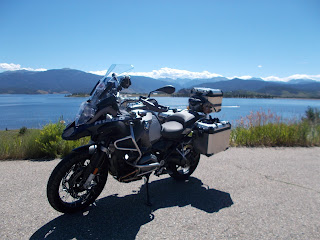 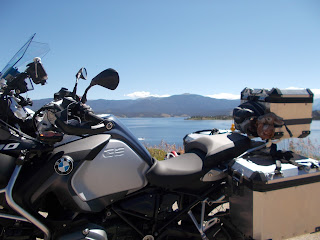 Not too much further up the road and I came upon the park entrance. 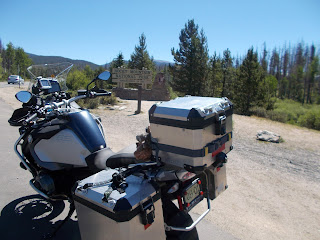 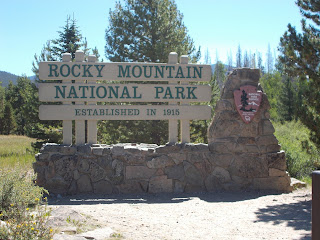 As I rode along, I found a turn off for an historic lodge.  While didn't take the time to explore the lodge, I did spy these antique beauties in the parking lot. 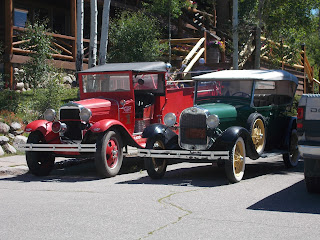 Before I knew it, I was at the Continental Divide! 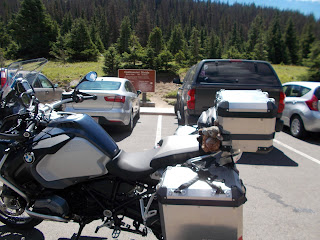 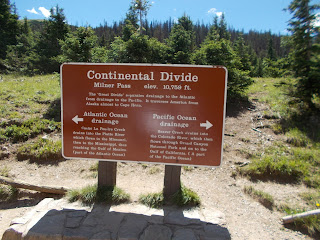 Traffic wasn't too bad at this point.  I actually had the road to myself for quite a while.  That was pleasant and I was thoroughly enjoying the ride.  As I got closer and closer to the top of the pass, traffic began to pile up.  Getting into a visitor center or rest stop was just impossible.  A line of cars waiting to get into the parking lot and just basic madness.  I just motored on.  Up near the top, the wind was pretty fierce and it got COLD!!!!  I knew it wouldn't be long before I started down the other side so I didn't stop to zip up.  I did turn on my heated grips :-) 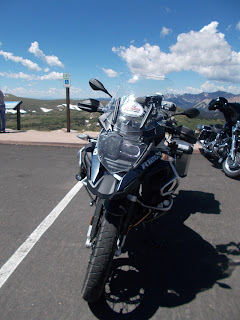 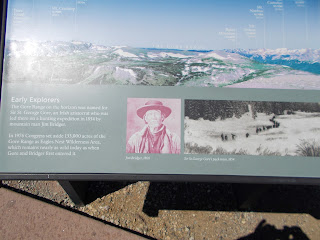 Such gorgeous views.  My little point and shoot camera doesn't do it justice. 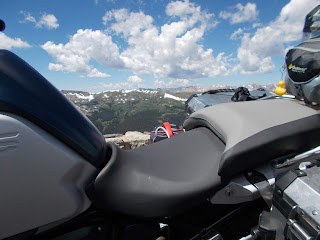 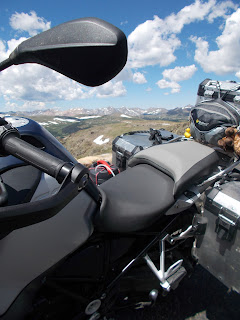 I didn't get any photos since there wasn't anyplace to stop that wasn't already filled with tourons (tourist morons), but I did see a big herd of bull elk with massive racks!  Wow!  Big!  Later on, I saw another herd of cow elk with their babies. I had to stop and let them cross the street.  Very cool. 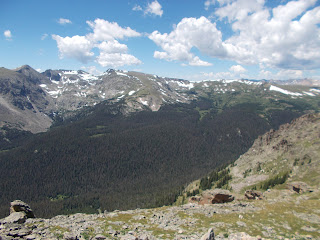 I also saw a couple of wild turkeys and two moose. 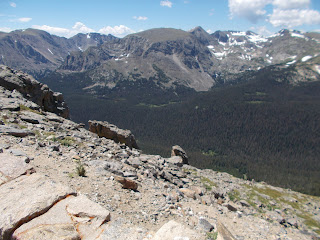 I ended up in Estes Park.  Have you been there?  Well, if you have you know it's a zoo of tourons.  I've been there before but for some reason my head didn't tell me to avoid it.  I actually thought I would ride over the mountain and have lunch in Estes Park.  Ha!  What a dolt!  Not only is it high tourist season, but it was Saturday!   The throngs of people both on foot and in cars was unimaginable.  Way, way, way too many.  It took me over 30 minutes to go through a stop light!

I spied an Egg & I restaurant and thought, yes, that's where I'll have a brunch.  But.....I couldn't get to the parking lot from where I was, so I waited in line and finally got through the light.  I pulled into a shopping center parking lot to turn around.  That took forever.  Finally, almost 45 minutes after I spied the restaurant, I pulled into their parking lot only to find no parking spaces available at all.  I circled a few times and then just parked illegally next to the dumpster in back of the restaurant.

Was it worth it?  No, not at all.  I did get a nice booth and had some french toast with bacon and eggs.  I managed to eat about half my lunch, paid my bill and mounted up again.  Now, I was looking for an escape other than Rocky Mountain National Park because it seemed that all the tourons in Estes Park were headed for RMNP.  Suffice it to say, I got lost, turned around, lost again, turned around again and finally just said F*ck it and headed back to RMNP!

My original intent had been to ride through RMNP, have lunch at Estes Park, return to Granby in time for afternoon classes.  Heck, I had plenty of time when I left this morning.  However, with all the stupid stuff in Estes Park, time was getting short.  And, to cap it all off, a big, black, ugly thunder storm was quickly approaching.  Crap, I was pretty certain I'd get close to the summit and hit the wall of storms.  Not what one wants to do on a motorcycle!

So, I got in line, showed the Park Ranger my park pass and motored along, very, very, very slowly up, up, up the mountain as the storm clouds darkened and it began to spit rain.  You know, some people just shouldn't drive mountain passes.  Yeah, the people who white knuckle the steering wheel and can't manage to go any faster than 15 mph and slow down to 5 mph for every curve in the road.  Lucky me, I got behind several of those kind of folks!  Nothing to do, no passing areas, too many people.  I just plugged along in first and second gear, although my honey has told me many times that 1st gear is NOT a travel gear.  Hahahaha!

As I neared the summit I was worried about the cold and wind I had experienced earlier.  However, much to my surprise, it was quite pleasant.  The wind had died down and it had warmed up.  Those thunder clouds were still hanging low but so far, I avoided any real weather.  I was praying that would last until I was off the side of the mountain!

I very slowly made my way down through the Park and was delighted when I could finally go 25 or 30 mph!  No opportunities to pass, so I just stayed in line.  Of course, rounding a curve, I found traffic stopped and both sides of the road packed with cars.  Jam on the brakes (yay for good brakes!) and slow to a crawl and stop.  Go a foot, stop, go two feet, stop.  You guessed it, a moose was spotted and contrary to Park rules, people had to stop in the road and on the side to chase after it.  Really?  Yes, really.  Tourons....  This happened twice on my way down the mountain.  No pictures of the Estes Park or return trip - it was just too stressful!

Okay, it was past time now for my first class on motorcycle maintenance.  Boo!  Guess I'll have to get Eric to give me a tutorial :-)  Once out of the Park and onto a larger highway, I rode straight to the Rodeo Grounds to try and catch the second class I wanted to take, Flat Repair.

When I pulled up, I ran into Annie who is our neighbor at the motel.  She was going back to the motel to shower and change and was catching a ride with Traci back to the event.  Oh, yeah, that sounded good so I did the same and missed both classes.

It felt good to get into street clothes (although I had to wear my boots because all I brought was flip flops and it was going to storm big time!).  Traci took us back to the Rodeo Grounds in her Jeep.  We got there just in time for dinner and for the festivities afterward.

The event tent was starting to fill up! 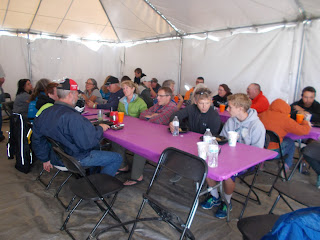 Dinner was put out and we all filled up our plates. 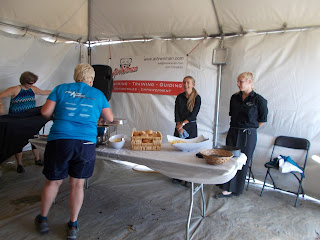 After dinner, it was time for some thank you's and awards. 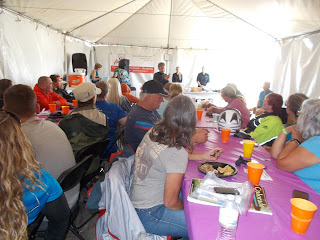 The General Manager of PowerWorld (who was the biggest sponsor) was awarded the Man Who Rides Like a Girl helmet with pigtails for his outstanding efforts and sponsorship!  That was very fun :-) 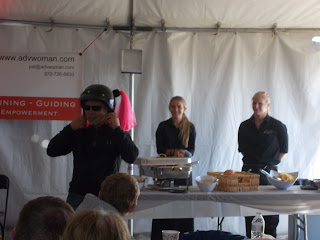 Everyone who completed a clinic was given a Certificate of Completion  This is going to get framed on put on our wall of aweseomeness! 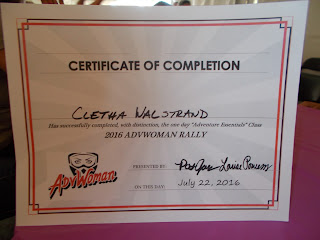 I also got lucky in the raffle drawings and won a set of Butler Maps in a lovely Wolfman case!  Yippee!

A wonderful time was had by all.  Unfortunately, some of the peeps had to scoot out early and missed the dinner and party.  I was so pooped that after the awards, I begged a ride to my motel and didn't hang around for the DJ music and dancing.  I don't know where those ladies got the energy!  Anyway, Lydia was of a like mind and we both ended up at our motel at the same time.

We had a good chat, a few belly laughs and I had a cocktail!  We both did some preliminary packing and then not too long later, were both fast asleep.

What a fantastic weekend of riding, learning, bonding, meeting new friends, learning new skills, kicking butt and having my butt kicked!  It was a wicked good time.  A big shout out to all who attended and an extra big shout out to Pat Jacques and her team for putting on such a fabulous event.  I'm looking forward to next year!

That about wraps my Saturday.  I'm pooped but in a good way.  As always, thanks for following along.  I'll be posting another blog as I come to the end of my ride-a-bout!