Last night I had a lovely stay at the Best Western, Dinosaur Inn in Vernal, UT.  As I rode into Vernal, I spotted a pink dinosaur!  Who knew dinosaurs came in pink?  I had a great night sleep and took my time in the morning.  I only had a couple of hundred miles to ride so I decided to backtrack at bit and go to the Utah Dinosaur National Monument and collect some more stamps and see what was there. 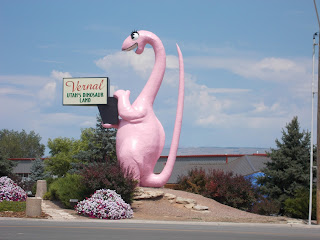 About twenty miles up the road I came to this parking lot with a GIANT dinosaur.  I knew I was on the right path. 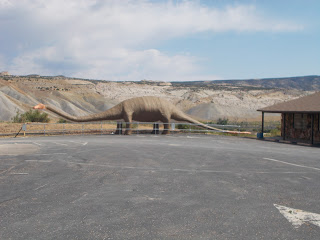 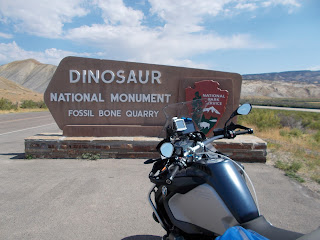 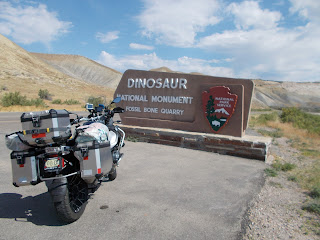 As I rode into the Monument, this guy was posing out front. 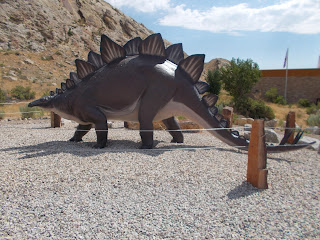 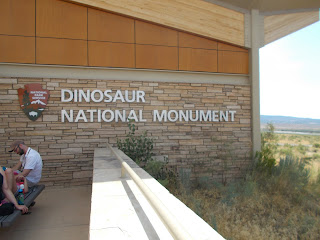 Since I was collecting stamps, I went into the visitor center and had a look around.  It was well done and very interesting.  And best of all ---- it was air conditioned! 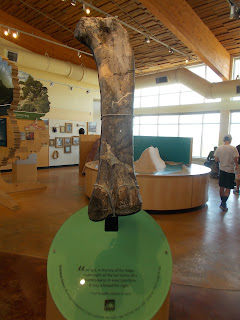 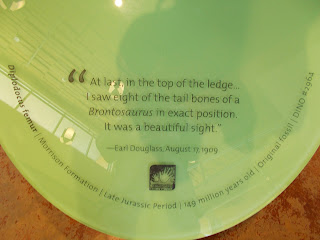 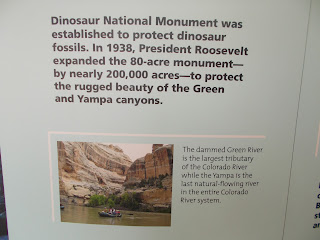 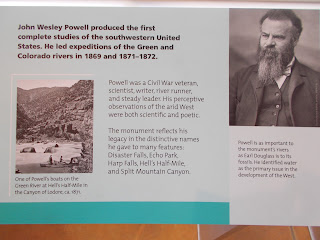 I decided to not take the shuttle to the quarry, it was HOT and there were small children.  Not a good combination for me.  I was having a great day and decided to keep it that way.  I got my stamps, sat through the 12 minute video of the National Monument and went back into the heat, mounted my mighty steed and turned toward home.

I just rode Highway 40 most of the way until Heber, UT where I turned south and came out at Orem, UT.  From there is was a quick sprint north on I-15 to my hotel for the night, the South Jordan Super 8.  I was getting my 6,000 mile service on the Beastie Bike the next day so wanted to stay somewhere relatively close to Harrison Eurosports.

I had stayed at this hotel when I picked up the bike and it was passable.  Not great, but passable.  This time, something changed.  It was downright AWFUL.  It was SO AWFUL that I sent an email to Wyndham.  Of course they haven't responded to me.....yet.  Anyway, I won't bore you with the details but suffice it to say I will NEVER stay there again.  I'd rather pitch my tent on the lawn.

I was the first customer at Harrison Eurosports and had made an appointment for my 6,000 mile service.  One of the techs helped me remove my hydration jug and panniers then rolled my bike into the service bay.  I was on my own for about 3 hours.  The time flew by.  I found plenty of peeps to chat with and one in particular, Jeff.  Now, what's funny about this is that every single time I've been to Harrison Eurosports, I've run into Jeff!  We both had a good belly laugh at that!

So, I visited with peeps, checked email, blah, blah, blah.  I wasn't interested in test riding any bikes and really had nowhere to go.  The time did go by quickly though and the same tech helped me put things back on the Beastie Bike.  Wait a doggone minute!  Where's my Iron Butt Rally plate backer?  Somehow it had disappeared when they put my new license plate on.  Huh?  Well, I'm not leaving here until you find it and put it back on!

By the look of my face and my stance, I'm pretty certain the tech took me seriously and went in search of the lost plate backer.  He couldn't find it.  Where could it have gone?  The guy who had actually put on my new license plate was out making a delivery so the tech called him and then went back into the service area.  Ah ha!  There it is!  He told me he found it in the garbage.  What do you think?  I know what I think.  Anyway, all is good.  My plate backer is now where it belongs and I rode away a happy girl.

Before I left, I went into the restroom and soaked my LD Comfort shirt in the sink, wrung out most of the water and put it back on before donning my jacket.  I'm sure glad I did that because it was ridiculously HOT.  The high temperature reading on my bike was 112.  I drank lots and lots of water and made several more stops as I headed south on I-15 toward home to re-wet my shirt.  That really helped alot.

It was around 5:30 when I opened the garage door and found this sign on the freezer!  Hahahahaha, I sure love my Eric :-) 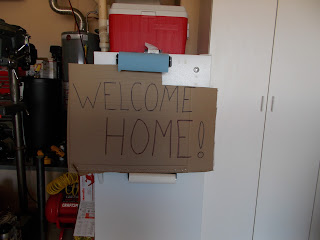 My Beastie Bike was happy to be home, too.  I'd been gone almost 3 weeks! 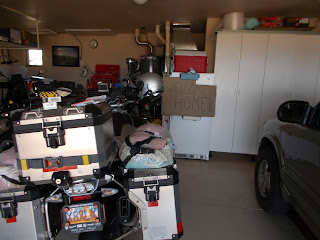 It was quite the adventure.  First, arriving in Denver, CO for the Butt Lite VIII finish where I helped with scoring.  Then, cross the country to Hamburg, NY for the BMW MOA National Rally.  Finally, back across the country again to Granby, CO for the ADV Woman Rally.  Whew!!!  I had so many fantastic experiences during my ride-a-bout and tent camping for the first time at the BMW Rally.

I put about 5,000 miles on the Beastie Bike during this adventure.  Zero issues, woohoo!  A few crappy motels but mostly decent places to stay.  A few days that were longer than I planned but, heck, I didn't really plan any of it.  I just got on the bike and rode :-)

I wore out a pair of gloves (my favorite summer weight ones!).  I also wore out my laptop carry case and my butt/fanny bag (that I've had for maybe 25 years!).  I learned a lot of good stuff during my ride-a-bout, made new friends, visited with old friends and I missed my honey.

When they become available, I'll post more pictures of the ADV Woman Rally.

Now, the Little Girl is sitting naked in the garage waiting for me to finish cleaning all her bits and pieces before putting her up for sale.  Oh my, can I sell her?  I mean, sure, I can sell her but we do have some pretty emotional ties.....  Stay tuned for more on this :-) 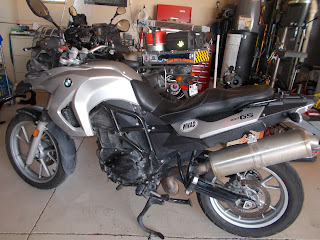 That's a wrap, folks.  I've only been home two days and already I'm thinking about another adventure.  A big shout out of THANKS to those who followed my Spot Tracker and my blog. You are greatly appreciated.  When I forgot to check in one day, several people posted on Facebook to make sure I was safe and sound.  Awesomeness!

So, until the next adventure, cheers to all!