Wow, already seven days into my adventure and the GS Adventure is behaving fantastic.  No issues, no drama and lots and lots and lots of fun :-)  Here is my story for the last two days and I'm sticking to it!

I managed to get up early and head out from Hays, Kansas.  My goal was at least 500 miles today. Again, I just hopped on I-70 and headed east.  It was an uneventful day and rather warm, a bit windy but nothing like yesterday's gale force winds.  About 100 miles into my ride I took a break at a rest stop and found this sign.

Guessing Abilene was quite the hot spot in its day!  Yesterday, I just simply couldn't find anything interesting to photograph in Kansas.  I'm not saying Kansas is boring, but.....well, I think you probably have to get off the Interstate to find the cool stuff! 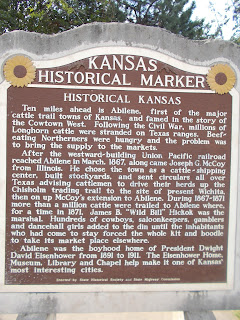 I was pretty much the only one there, which was just fine with me :-)  I found east Kansas to be much prettier with rolling hills and green stuff.  Whereas west Kansas is flat with corn and wind. 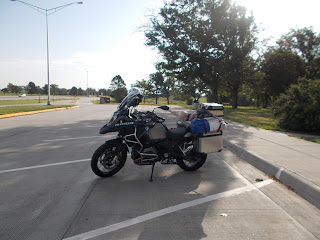 Then it was back to the slab for more slogging.  I flew through Missouri and waved to Bob Rippy as I went through Kansas City.  Hey, this time I was in the proper lane and didn't end up at the Convention Center, yippee!!  I didn't stop or set a foot down through Missouri, maybe next time :-)

Finally, I made another rest stop, this time in Illinois.  I took a bit of time here as I really needed a rest.  I was hot and thirsty and just needed to stop for a while.  So, I looked around for something interesting and this is what I came up with. 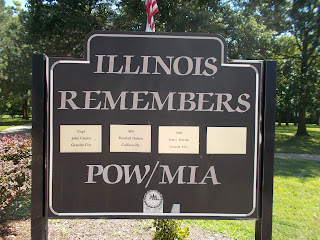 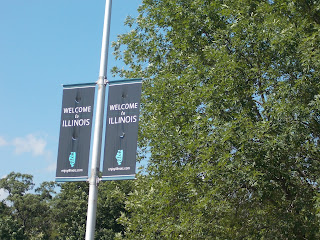 They are serious about wearing a helmet here which is just hunky dory with me! 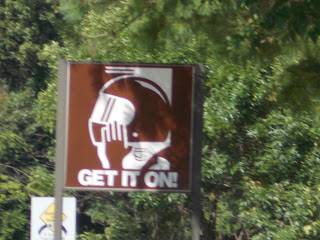 I ended up in Effingham, IL and found a Best Western just off the freeway.  Yippee.   While it was not the nicest Best Westie I've stayed at, it would do. 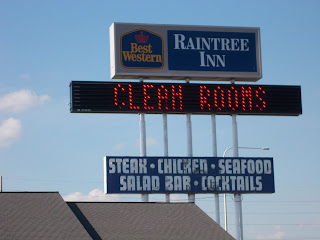 They gave me a handicap room which was fine with me because I was feeling a bit handicapped at the time. I was hot, tired and my knees hurt like heck!  The limp to the room wasn't even faked.  So, I took advantage of my room status and parked right in front, hahahaha! 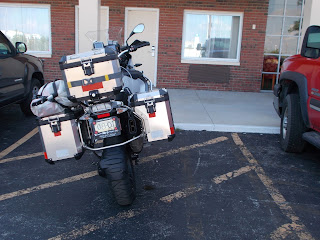 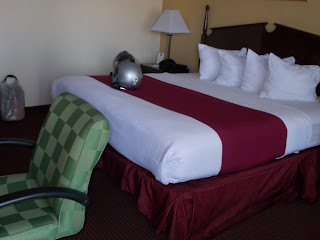 No fridge or microwave but they did have a nice TV. 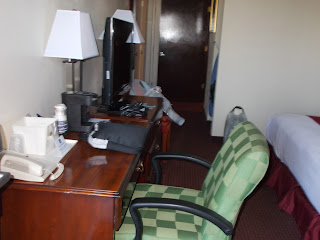 I was tired from the long day.  I rode over 600 miles and I know that's not a LOT by Iron Butt standards, however, I now have a candy ass and it was plenty for me :-)  I ordered Chinese delivery for dinner.  Oh boy, it was delish!  And way too much of it and no way to carry the leftovers with me on the bike.  Oh well....

The highlight of my day was yet to come.  I had spoken with Rick Martin a day or two before and we agreed to meet for a Moonshine Burger.  I've never been to Moonshine although it has been on my list of "to do" for a long time.  We agreed to meet in Casey, IL around 9:30 or 10:00.  Now, Rick gave me directions as to where to meet him. Okay, he said go to the light, turn left and you'll see the World's largest Wind Chime and Rocking Chair.  You can't miss them he said.  Okay, fine.

I got up plenty early, had a tiny brekkie at the Best Westie, loaded up my bike and headed out again on I-70.  I took the Casey, IL exit and rode into town where I found a four way stop with a flashing red light.  Okay, I turned left.  I found the World's Larges Golf Tee but I didn't find Rick :-)  I rode down the road a bit further but quickly realized that was just not right so I made a U-turn back to the flashing red light.  I decided to pull into a gas station/convenience store to inquire about directions and who should be pulling out of the station?  Yup, it was Rick and his lovely lady Sharm along with their totally cute, long hair Corgi named Crunchy.  Well, I didn't go to the right place, but I did meet up with them so I call that a win.

Apparently, I was supposed to go further into town to the STOP and GO light, not the flashing red Stop Light.  My bad :-)  Doesn't matter, I managed to find Rick and Sharm.  Since we were at a service station and they had FREE AIR, Rick helped me to put some air in the front tire as it was down about 3 pounds.  Thank you Mr. Rick!

I followed Rick further into town and parked the bike at the World's Largest Wind Chime.  Just a note folks, Casey, IL has more BIG things than any place I've ever been.  Just Google it!  Largest knitting needles, crochet hook, golf tee, ruler, mail box, wind chime, rocking chair, bird cage and maybe others I don't know of.  Oh yeah, pitchfork and something else I can't remember.  Wow!  Plus you can go to Lincoln's cabin.  Lots of stuff to see and do in Casey, IL.

We spent a bit of time in town looking at all the BIG STUFF.  Here are Rick and Sharm in front of the Wind Chime.  Oh, gosh, aren't they just so cute? 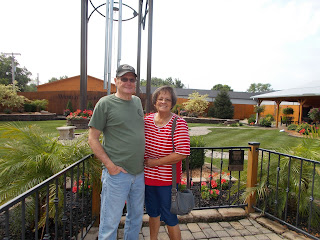 Yup, this is the chair. The World's Largest Rocking Chair!!!  Man, it is really, really big :-) 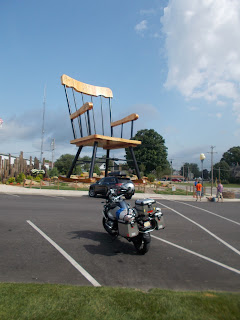 Me posing at the Wind Chime. 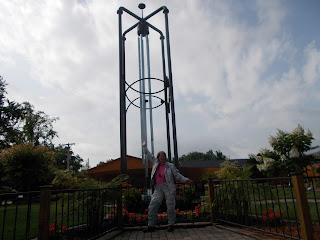 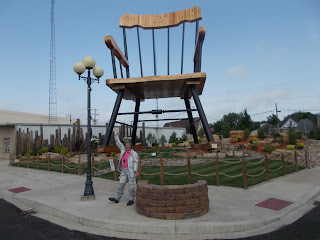 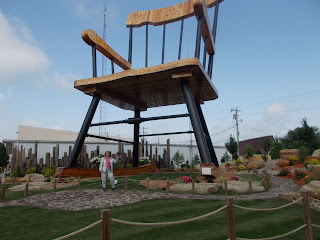 Oh Baby, that thing is Humongous!  Rick told me that in order to make it in the Guinness Book of World Records, the item has to be functional.  So, at some point, a bunch of people were in the chair to make it rock, hahahaha.  Wonder how they got up there?  A ladder?  A lift?  I dunno.  But funny to think about! 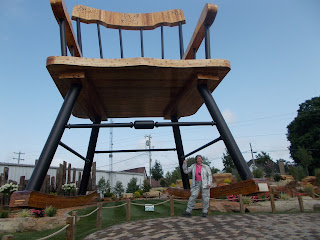 Oh, yeah, I forgot, here is the World's Largest Pencil.  A number 2 with a real lead tip! 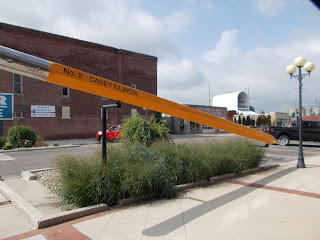 Swinging away in the World's Largest Bird Cage.  I love swings, I could have spent a lot more time in that cage :-) 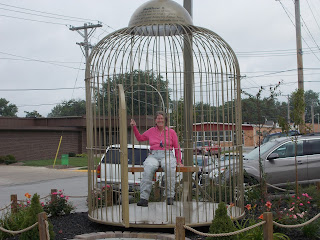 This one was really fun.  The World's Largest Mailbox.  You can buy a post card, climb up into the mailbox and post your card.  When you put your card in the slot, it makes the red flag stand up for mail pickup!  How fun is that? 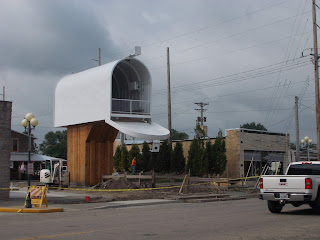 See the flag on the side? 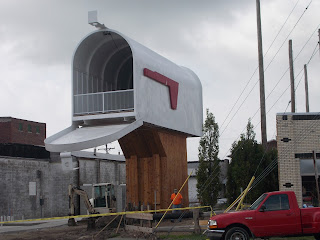 So Rick bought me a postcard and I filled it out and climbed into the Mailbox, up, up, up to the top where I found the slot to post my card.  What?  Nothing happened :-(  Oh, the mechanism was stuck so I lifted the lid and pushed down the card and guess what?  That red flag began to move up! 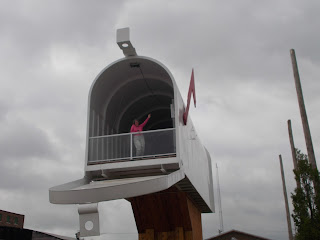 There you go, mail all ready to be picked up by the postman.  I'm actually looking forward to finding my postcard delivered to me at home! 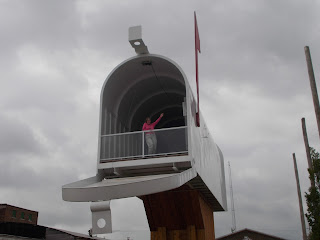 I almost forgot, Casey, IL is also home to the World's Largest Wooden Shoes.  Now, how they proved them functional I'll never know because I never heard there was a Giant living around there.  Anyway, they are huge and beautiful! 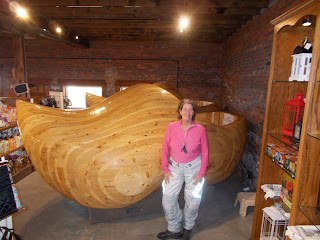 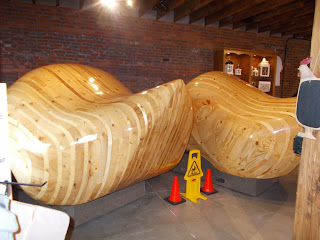 After our sightseeing in Casey, I followed Rick down a thousand or so rural Illinois roads to Moonshine.  Even though I had the address I rather doubt my GPS could have found it!

Yes, the World Famous (at least in Iron Butt circles) Moonshine General Store!  Of course, I had to take the obligatory photo of my new bike in front of the store. 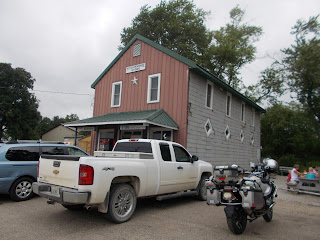 Rick and Sharm humored me and posed in front of the store.  I think they are just adorable :-) 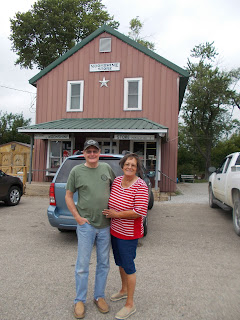 Rick's friend, Mike Roberts joined us for lunch.  This is how they roll in rural Illinois! 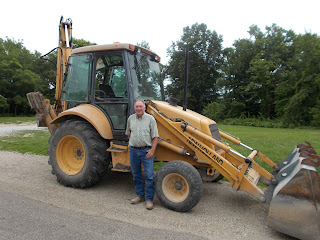 But of course, another Cletha pose in front of the Moonshine General Store :-) 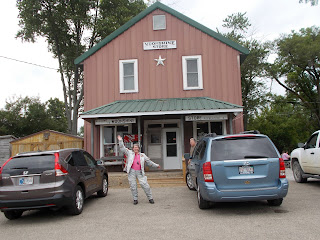 A few pics of the inside. 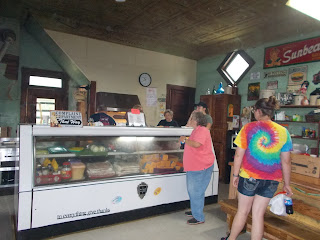 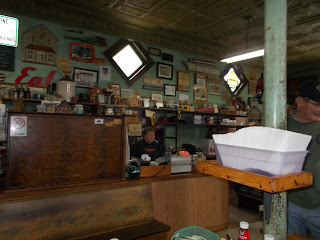 We all ordered burgers and then went outside to the picnic tables to enjoy our lunch.  The burgers are handmade, no frozen patties here!  It was delish and we had a wonderful conversation while enjoying our meal.  Unfortunately, I didn't take any pics of the lunch or picnic tables.  Gives me a reason to go back.  And, also unfortunately, I needed to leave and hit the highway.

I followed Rick down all kinds of tiny, rural roads and eventually got back onto I-70.  Thanks Rick, you saved me probably two or three hours of being lost!  He took me to the Interstate a different route than what I came in from so I didn't have to backtrack.  As I approached the Interstate on-ramp, Rick and Sharm waved farewell out the cab of the pickup and I turned onto I-70 to slog yet again.

It was a delightful diversion and so much fun.  Thank you Rick and Sharm!  Let's do that again :-)  Back on the Interstate, I headed east and wanted to get at least 300 miles under my belt.  Well, I was close.  I think maybe I have 280 or 290.  I ran into a pretty severe rainstorm - actually so severe that everyone slowed way down and put on their flashers.  I fell in line and did the same.  I couldn't see squat!  Of course my pinlock visor was in the pannier and not on my helmet.  I did spy a rider, in SHORTS, huddling down beneath an overpass.  Hahahaha, bet he got soaked anyway because the wind was blowing the rain everywhere and it was raining HARD.  Wussy.

At the next rest stop, I changed out my face shield for the pinlock because the sky was looking pretty ominous.  However, I only encountered light showers the rest of the afternoon.  Actually, it was rather nice to have some rain and cool down the air.  Most of my ride has been too friggin' hot!

I lost an hour because of the time zone and started looking for a motel. I was done anyway and wanted to stop.  I ended up at a Red Roof Inn in Springfield, OH.  Don't bother stopping here, lol.  Lately, Red Roof has been upping their game and their refurbished places are the bomb, but not this one.  They should let a bomb off here and start over.  Hahahaha, oh well.  I have a bed and internet.  What more could you want?  It is a box motel so my bike is downstairs all alone.  I really prefer the outside door, park in front of your room kind of place.  Hopefully, everything will be fine in the morning.  Besides, I have insurance :-)

Tomorrow should find me in Hamburg, NY at the BMW MOA Rally.  This will be a whole new experience for me.  I don't know if I will have internet service or not.  I suppose you'll all have to wait with bated breath for my next blog (giggle).

Today was a grand adventure thanks to Rick and Sharm.  My bike performed just like it is supposed to and carried me here without issue.  I'm amazed at how easy this monster is to ride.  I miss my honey, Eric, but I'm also excited to be on a ride-about!

Thanks for following along with me.  I can't wait for the next episode!