After the horrible ride on Friday we decided to just stay put on Saturday.  The weather was still awful and even colder, brrrrrrrrr.  We had already cancelled our get together with Tina and had determined that touring the Biltmore Estate was out of our pocket book.  So we hung out in our lovely room, watched TV and dried out our wet gear.

Our excitement for the day was getting UBER to take us to the Creekside Taproom for dinner :-)  It was lovely.  We shared a BIG burger with tater tots and Eric had a beer and I had a Mimosa.  Dinner was quite nice and we got another UBER back to our room.  It was nice to get out for our meal rather than in-room delivery of Pizza!

Sunday we woke up to dark grey skies but no rain!  Oh but my oh my, it was COLD.  Fortunately we both travel with our heated jackets so that was the order of the day.  Bundle up and plug in.  After our hotel brekkie we loaded the bikes, plugged in the electrics and headed out.  I refused to take I-40 again (I'm such a bitch that way) so we ended up on the Blue Ridge Parkway.  Yippee!  My original plan was to ride a section of this wonderful road.

Uh oh, we had only been riding a few miles on the BRP when we saw a sign saying the road was closed ahead.  Poop!  Oh well, we decided to ride as far as we could and if we had to turn around, so be it.  Much to our delight the road was open further than expected.  Hooray!  We were gaining elevation and I was so glad my heated jacket was operating just like it is supposed to!  Also, lucky us, we had to road to ourselves.  A few other brave souls were on the BRP but not many and for the most part we rode alone.  Bliss!

Up, up, up we went.  In and out of clouds and bursts of clear blue sky.  Mist was rising off the road as the day heated up.  Imagine our surprise when we spotted snow on the side of the road and in the trees!!!  SNOW???  Yes, snow!  Fortunately the road seemed to be clear of ice and snow but we proceeded cautiously at the posted speed limit of 45 mph (or thereabout ;-) ).

We didn't stop at any of the scenic view pullouts until we reached the highest point on the BRP.  Finally, I said to Eric, we must stop and get some pics of this snow!  So we did ;-) 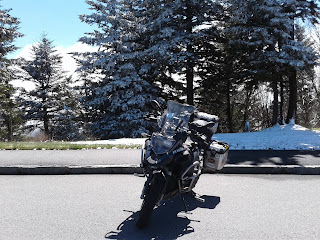 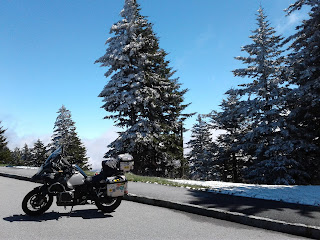 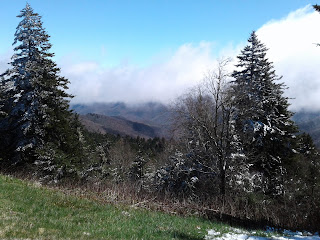 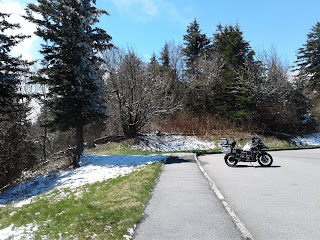 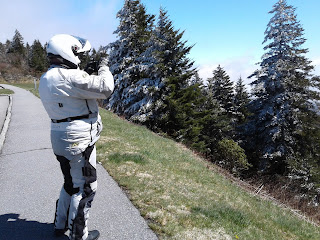 Almost like a Winter Wonderland!  Just up the parking lot was the sign for the Highest Elevation on the BRP at 6,040 feet!  We were tickled that although we only got to ride about 52 miles of the BRP we were lucky enough to hit the highest elevation of the entire BRP! 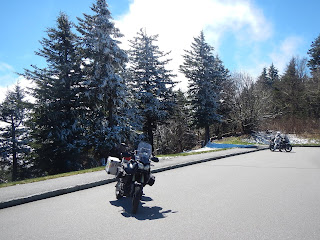 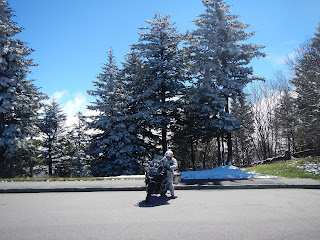 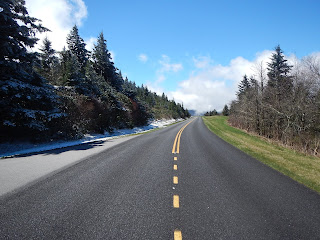 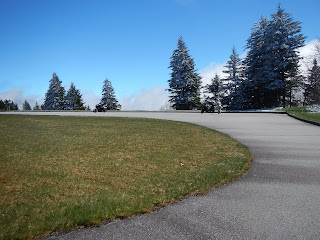 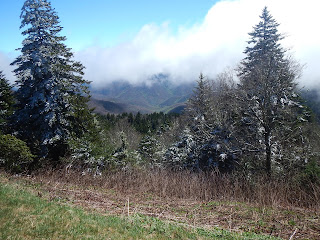 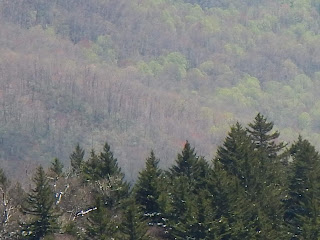 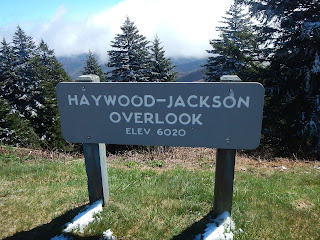 As we then wandered down to lower elevation we finally encountered the section that was really closed and had to exit.  No problem as this is the point we had determined was our best hopping off spot.  I don't remember all the roads we went on but I'll post a Spot Track below so you can figure it out if you want to, hahahaha.  If you go to my Spot Tracker link you'll see a blank space. My bad, the batteries had died.  Fortunately, I had replacements and quickly sorted that out! 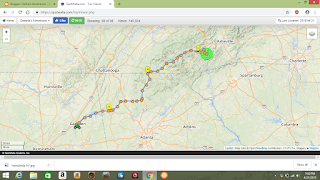 Our day was clearing up and the sun was shining.  It was still rather chilly so we kept the electric gear on.   Not long after exiting the BRP we found ourselves entering the Nantahala National Forest.  Oh my goodness, what a treat!  The road follows the Nantahala River and is simply stunning (especially on a sunny day!).  (File photo) 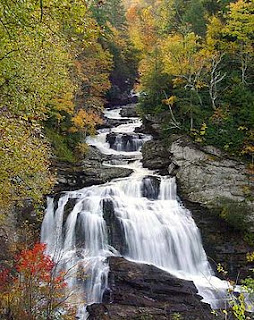 Our day of riding was simply fantastic!  The bitter cold morning turned into a beautiful, sunny day.  About 3 pm we stopped and took off the electrics.  Another hour or so later we stopped again to remove even more layers and open vents.  My pissyness from Friday was almost forgotten.  LOL, on Friday after the I-40 nightmare I was ready to just quit riding.  It was that unpleasant.  However, today was glorious!  No Interstate, little traffic and only a few dipshits that we had to avoid.  All in all, a perfect day of back roads, scenic byways and small towns.

We ended up in Gadsden, AL for the night.  Chinese pick-up for dinner and a few cocktails completed the day.  So lovely!  Tomorrow is only a short scoot home.

The day dawned with beautiful sunshine and warm enough to forget any electric gear!  Yippee!!  We stuck to the secondary roads and had a glorious ride.  Eventually we hopped on the Natchez Trace and home wasn't far.  Since we had lots of time, we took a very easy, lovely ride on the Trace, stopping to smell the flowers and enjoy the views.

A quick stop at the Tennessee - Tombigbee Waterway pullout and picnic area along the Trace.  So peaceful and beautiful! 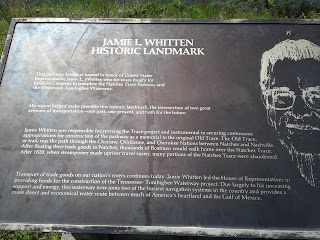 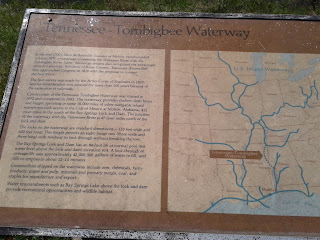 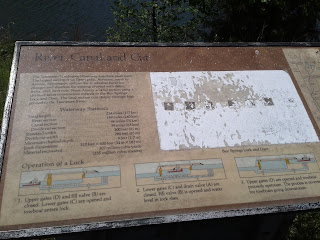 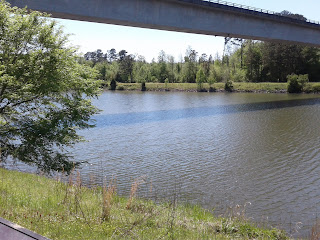 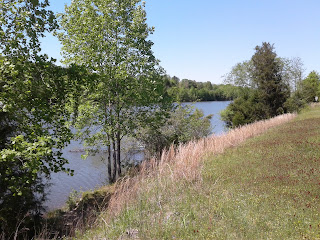 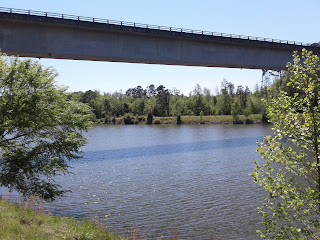 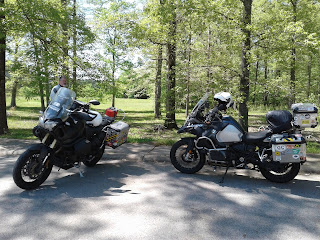 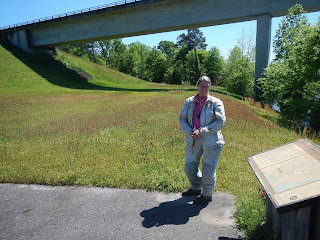 Then another stop at Jordan Picnic area also on the Trace. 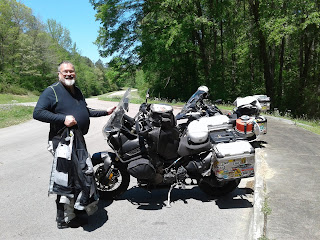 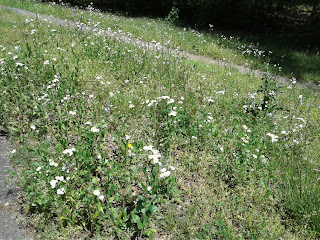 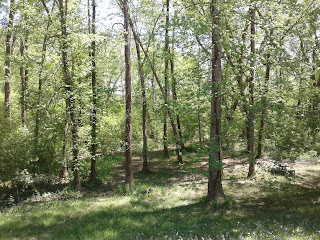 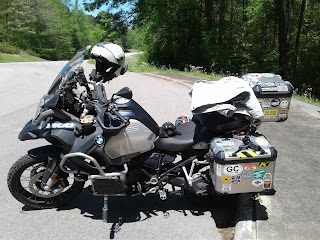 I so enjoy riding the Natchez Trace.  I don't mind the 50 MPH speed limit as it gives me lots of time to gawk and look around.  It's fun to stop at different pullouts and read the historic and descriptive signs.

We got home early afternoon, unloaded the bikes, threw a load of clothes into the washer and poured a cocktail.  It's fun to travel on the bikes but it is always a good feeling to get home after the ride.  Our Easter Weekend didn't turn out how we expected but it was still an adventure to remember!

Thank you for following along.  Another adventure coming up!  Stay tuned.