Eric forced me to get up out of bed at 5:00 am this morning!  Gack!  That's early, really early.  Oh well, I had to pee anyway so I got up.  The reason he got me up was so we could ride to Tiptonville, TN to a place called Boyette's Dining Room at Reelfoot Lake for a meet-up of riders for lunch.

Okay, the weather was decent (as in not raining) so since I was up I was game to do the ride for lunch.  I didn't put on my heated jacket but the temps were a wonderfully warm 55 degrees and a bit up the road they dropped to a slightly chilly 52 degrees.  I almost said something to Eric about the cold but I knew it would warm up.  The skies were clear and the forecast was predicting 75 degrees or so.

I had all my vents zipped up and my buff around my neck.  I was reasonably comfortable :-)  We headed north on Highway 45 and we pretty much stayed on that highway for the majority of the ride.  A big four lane highway, we encountered traffic in Tupelo and Corinth and then things mellowed out.

We made stop or two along the way but mostly just rode up to Tiptonville, TN with no issues (yay!).  We pulled into Boyette's around 10:30 and the parking lot was just beginning to fill up.

Here is our host, Robert Rehkopf! 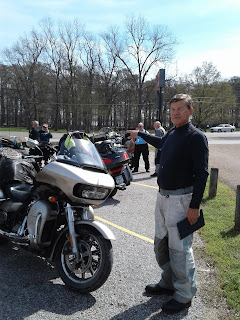 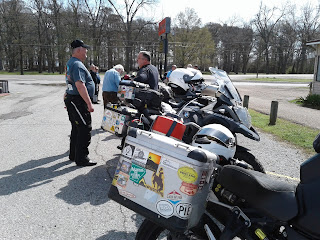 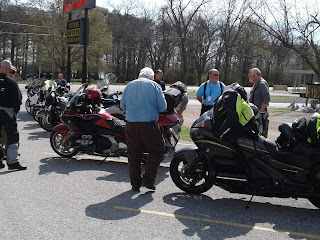 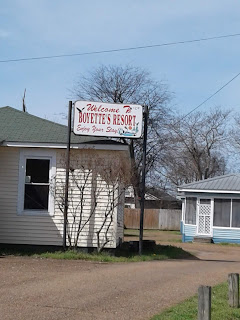 The dining room was getting full. 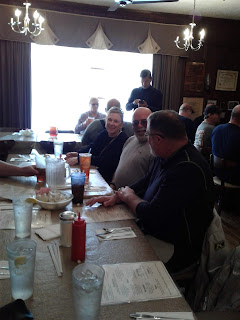 Our new friend Bob along with Karen and Mark Campbell (old friends).  Hey, all friends are good :-) 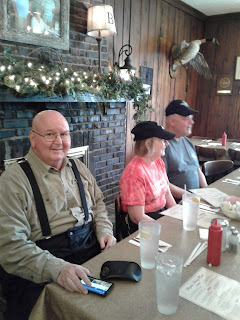 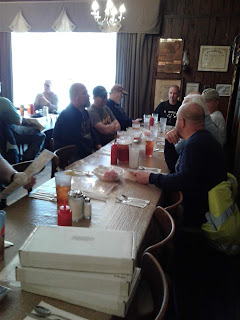 Robert give a welcome to all attendees.  Awards were passed out to the oldest rider (72), the most miles traveled (900 +) and the youngest rider (52).  So what does that tell you?  The youngest rider was 52?????  Peeps, we need to get some young blood into this activity.  It's tons of fun, you meet peeps from everywhere, make great friends, have good food and go to interesting places.  What's not to like about that?  Challenge - encourage younger riders to do this stuff! 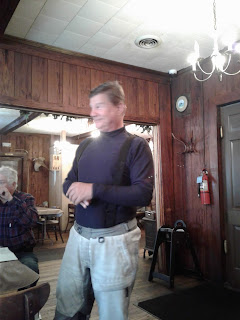 The dining room got even more full with more and more peeps showing up.  I counted 40. 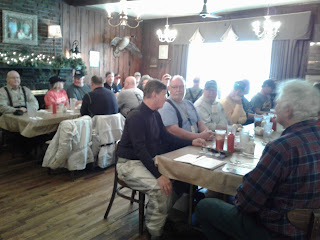 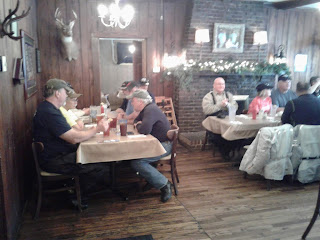 The line of bikes in the parking lot got a LOT bigger!  So much fun :-) 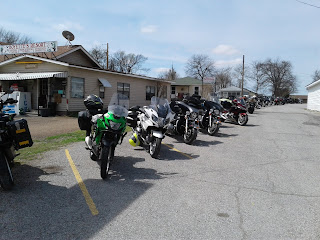 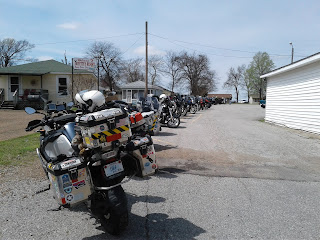 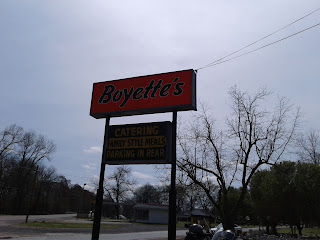 The entrance to the restaurant.  Besides the 40+ of us motorcyclists, the restaurant was packed with regular customers, (and the All You Can Eat Crowd..., which is a whole demographic in and of itself).  Great place to stop and have a bite.  People watching isn't bad either! 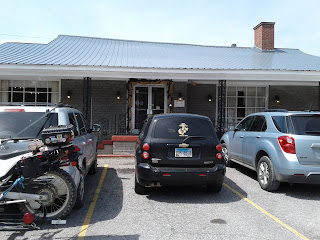 After lunch, a number of folks went on a 1 hour lake cruise.  Instead of the cruise, we went to the State Park visitor center and had a delightful time. 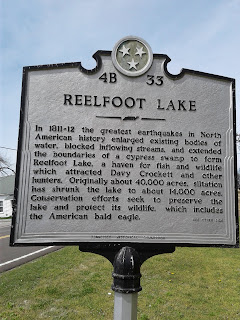 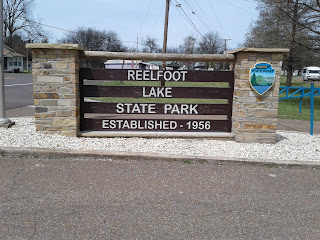 This is a Red Tail Falcon that was injured and now spends his time amusing tourists.  Very cool. 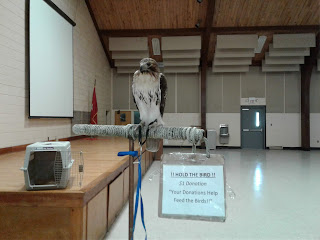 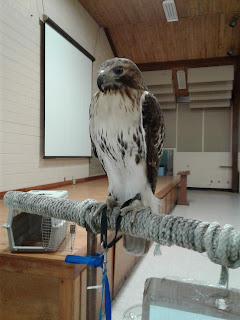 There were a plethora of snakes and some turtle shells showing the variety of life in the area as well.  Sorry, no pics of the snakes, though some were impressive and others were shy.

Outside, they had two Bald Eagles that had been injured and are now residents of the park until healed up.  Again, very cool! 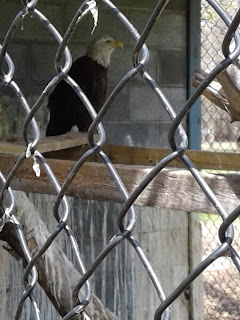 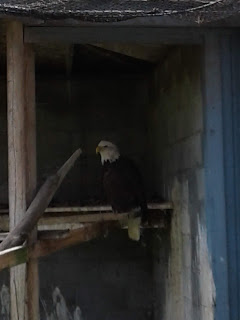 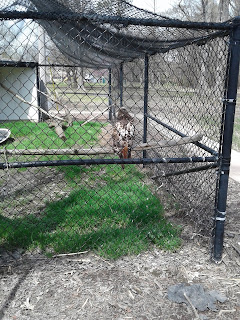 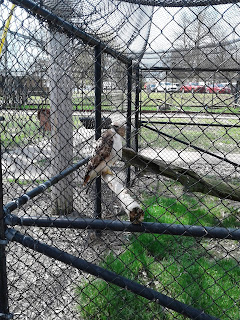 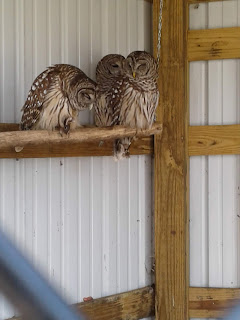 Look at those awesome ear feathers!!! 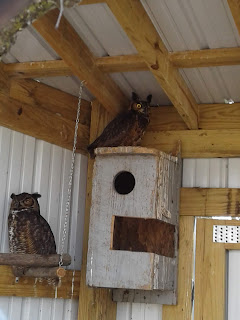 We then took the nature walk out in to the Cypress Swamp and to Reelfoot Lake proper. 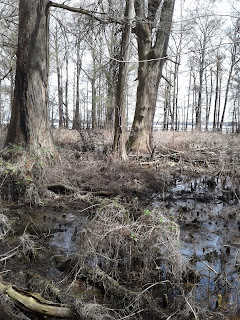 It was warm but not hot or humid.  Perfect temp to take this .25 mile stroll.  We were startled by something in the water at one point.  Hope it was a fish and not a big ole hurkin' snake!! 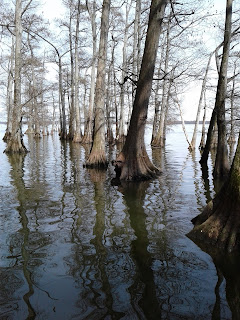 It was a beautiful day, a great lunch, fun peeps and an awesome walk-a-bout! 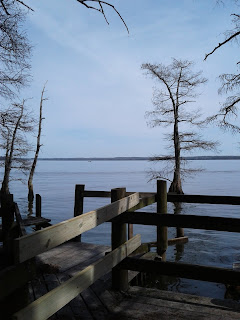 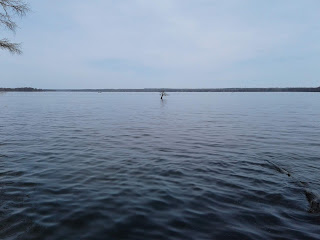 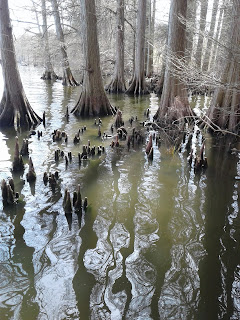 After our little hike in full riding gear (minus jackets) we returned to our bikes, put on the rest of our gear and headed home.  All was fine (except for the stupid ass who tried to pass an on-coming car until he realized we were headed in the opposite direction and he was going to take us out and the car he was passing!!!!  Fucktard!!!!).  After that pucker moment, we settled into a nice rhythm and simply rode along home!

We were lucky and our lovely weather stayed with us until we got home.  About an hour later the heaven's unleashed and poured water!  So glad we stayed dry :-)

It was a wonderful day ride of about 360 miles or so.  Both bikes ran perfect.  We had good weather, met great peeps, had decent food and a lovely walk-a-bout.  Thank you Robert Rehkopf for the lovely RTE, great call :-)

Again, thank you for following along.  Stay tuned for the next adventure!  I'm sure one is coming up quickly :-)