I've been looking forward to Gerlachfest 2014 ever since the dates were announced.  For those who don't know, Gerlachfest is a gathering of Long Distance Riders at the invitation of the Cognoscente Group, who puts it all together.  The purpose of the event is a memorial for those riders who have passed on the last year.  A time to stop and reflect upon lives lost and what they brought to us.  They are most certainly missed and are a solemn reminder that life is precious and all too short.

It is also a time of joy and happiness.  A time to celebrate the opportunity to get together as a group, break bread together, play games and generally have a good, silly time until the next year.  So, no wonder I was excited about it!

Unfortunately, my honey, Eric was burdened with (ugh) work and couldn't come along with me.  He is also the current keeper of the Memorial on Guru Lane.  He made a very quick trip in the Smart Car to Gerlach, NV to make sure the Memorial was neat and tidy after the recent rains.

Again, for those who might not know, the Black Rock Desert/Playa is also the site for the Burning Man celebration.  Located just outside of Gerlach, NV.  There is not much out there folks and also nobody around to bother those who play on the Playa!  The only lodgings in Gerlach are at Bruno's Country Club and what lodgings they are!  Hahahaha, but I'm getting way ahead of myself.  More on that when I actually get there and can take some photos :-)

So, I was on my own for this journey.  I'd like to say I woke up early and eagerly loaded my bike and hit the road just as dawn broke.  But, alas, that wasn't the case at all.  I slept in and finally drug my sorry booty out of bed around 8:30 (maybe closer to 9 am).  Enjoyed my coffee, checked my email and finally decided I'd better get a move on!  Gerlach, NV is about 700 miles from our home and I had decided to make it a two day ride, so the late start wasn't really an issue.  I figured I'd just stop when I felt like it.

I was going to ride from home to Highway 93 in Nevada and then on to Ely, NV and Hiway 50, The Loneliest Highway in America!  I made a quick stop in Enterprise, UT to fill up and then made my way to the Utah/Nevada border. 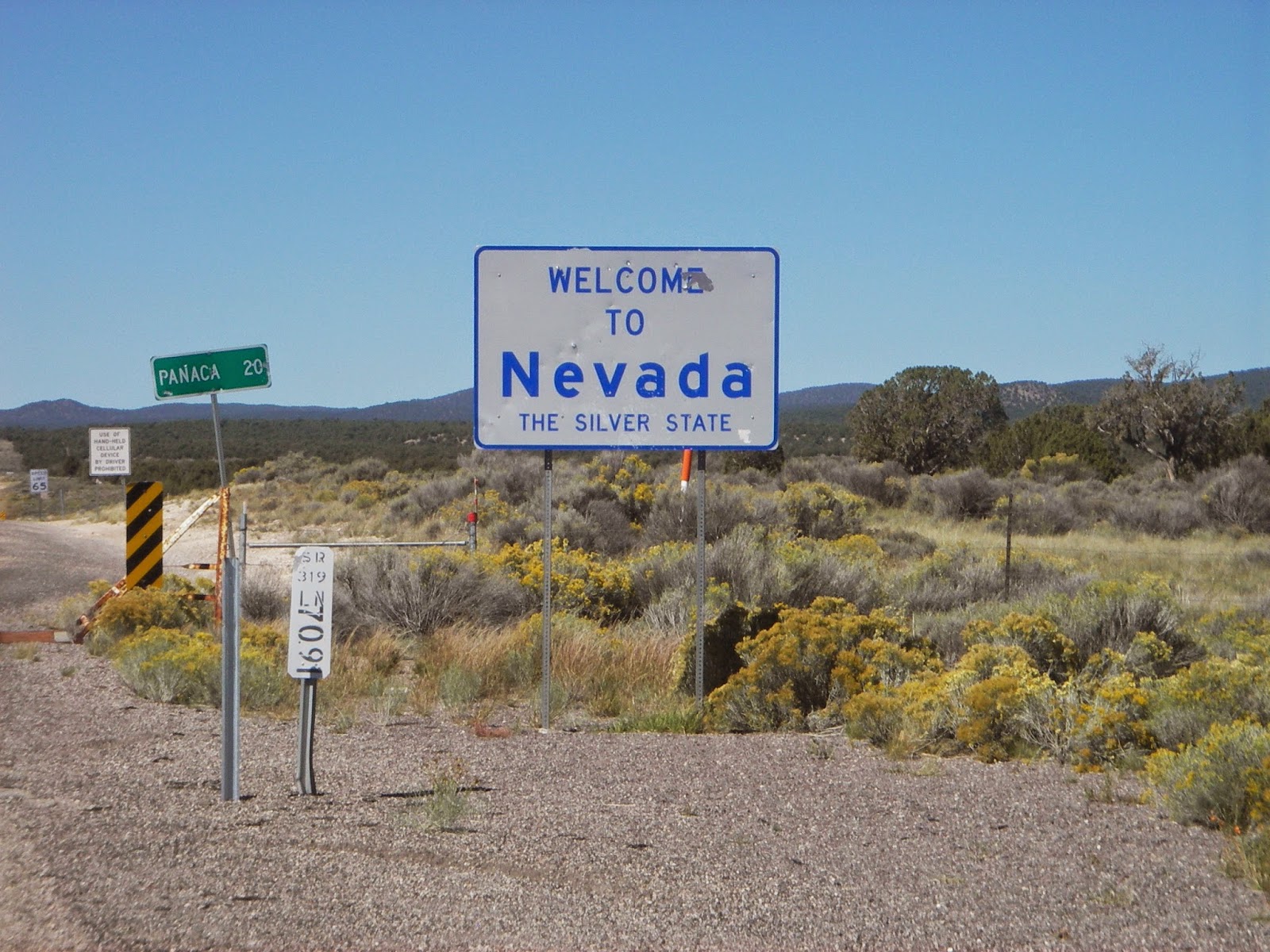 The weather was perfect, mid-70's, clear and sunny with no wind.  I had a great ride up Hiway 93 to Ely.  Hardly any traffic and no critters.  All was good.  I made a gas stop in Ely, NY and also had some lunch.  Back on the bike I was now officially on Hiway 50.  There is not much on Hiway 50 and the few towns are very small and far between.  I rode through Eureka which has a few nice motels but it was much too early for me to stop for the day so I motored on

I could see flashing lights up ahead.  Yup, the cop kind of lights.  But, I couldn't see any reason for flashing lights.  Heck, I wasn't speeding (not by Nevada standards) and I couldn't see another vehicle for miles.  The Nevada Highway Patrolman waved me to a stop and told me that a wide load was coming down the highway.  So, I happened to be at a great place to pull over and stop and that's what I did :-)  Note - there are not that many good spots to pull over on Highway 50, lol. 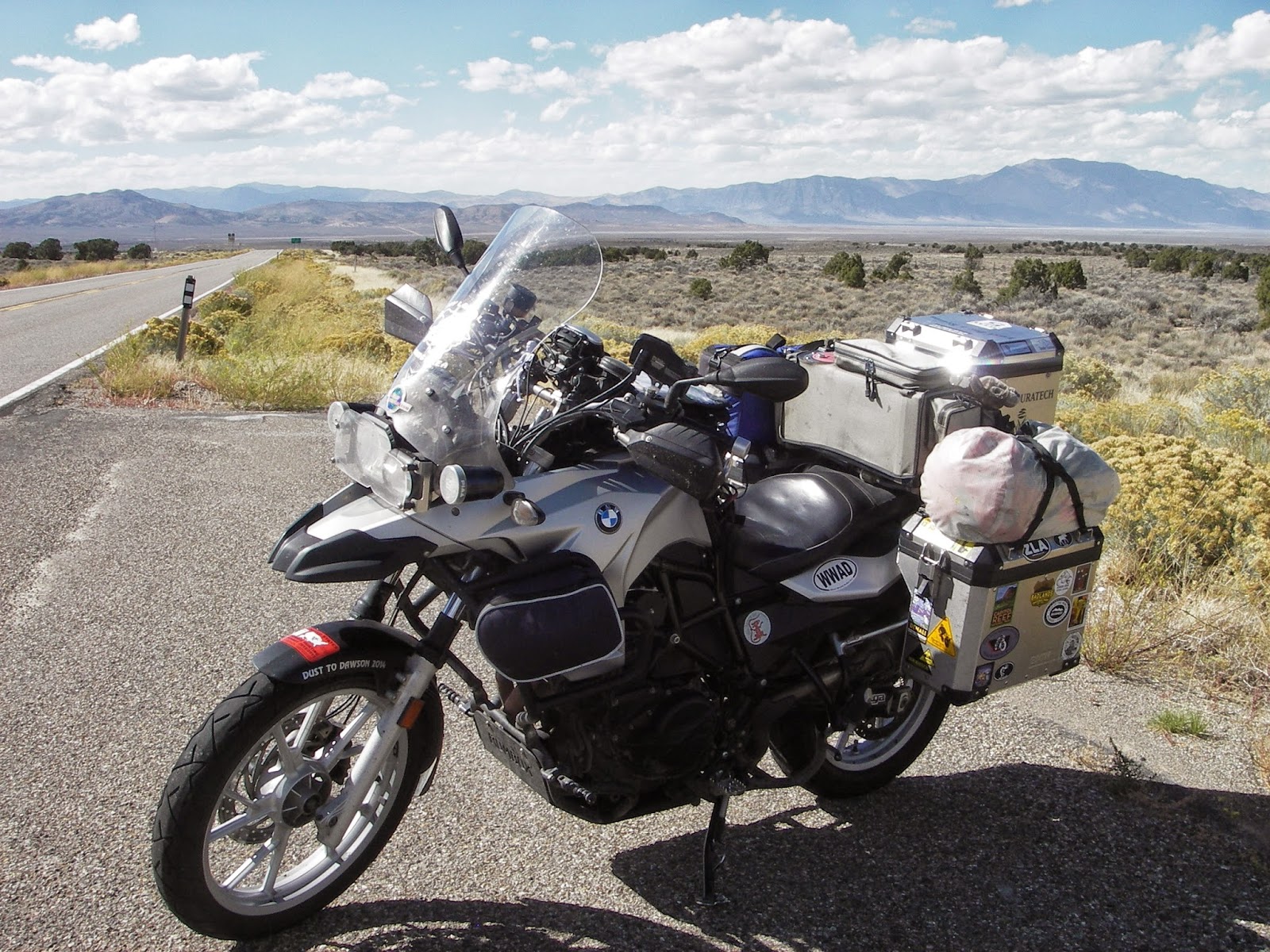 You can see just how lonely this area is.  Absolutely nothing but sagebrush and desert flora for miles and miles and miles.  An occasional vehicle or critter - but that's all.  No cell services either.  Very remote. 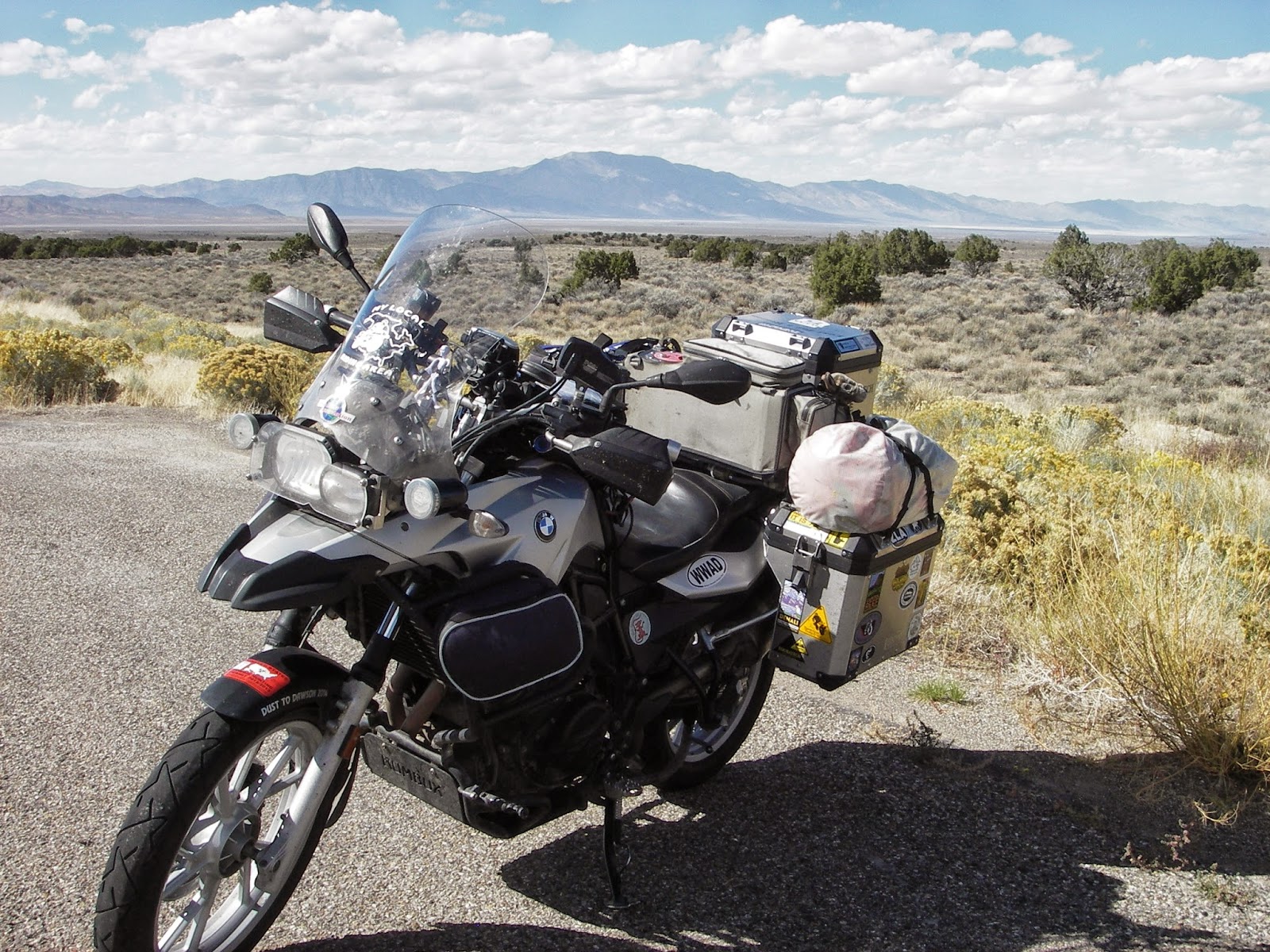 So, there I sat for a bit, waiting.  Here you can see one of the many Nevada Highway Patrol cars escorting the wide load.  Gee, I had enough time to get off the bike, take some pic, smoke a cig and then still waited a bit. 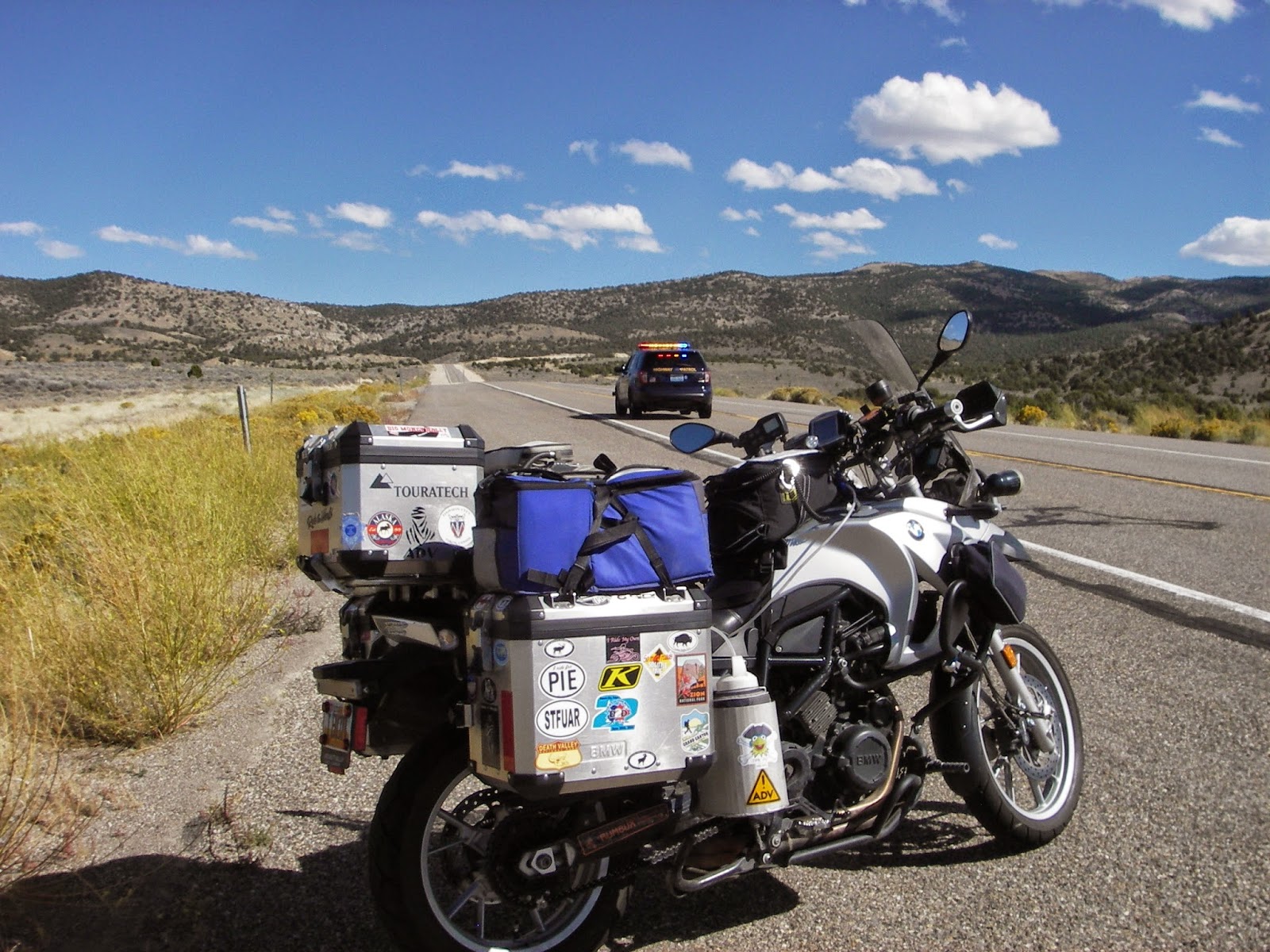 But, eventually, along came a caravan of HUGE vehicles.  They took the entire road!  For this episode, I think I counted 4 and then later came upon the area where the work was and I'm sure there were a boatload more. 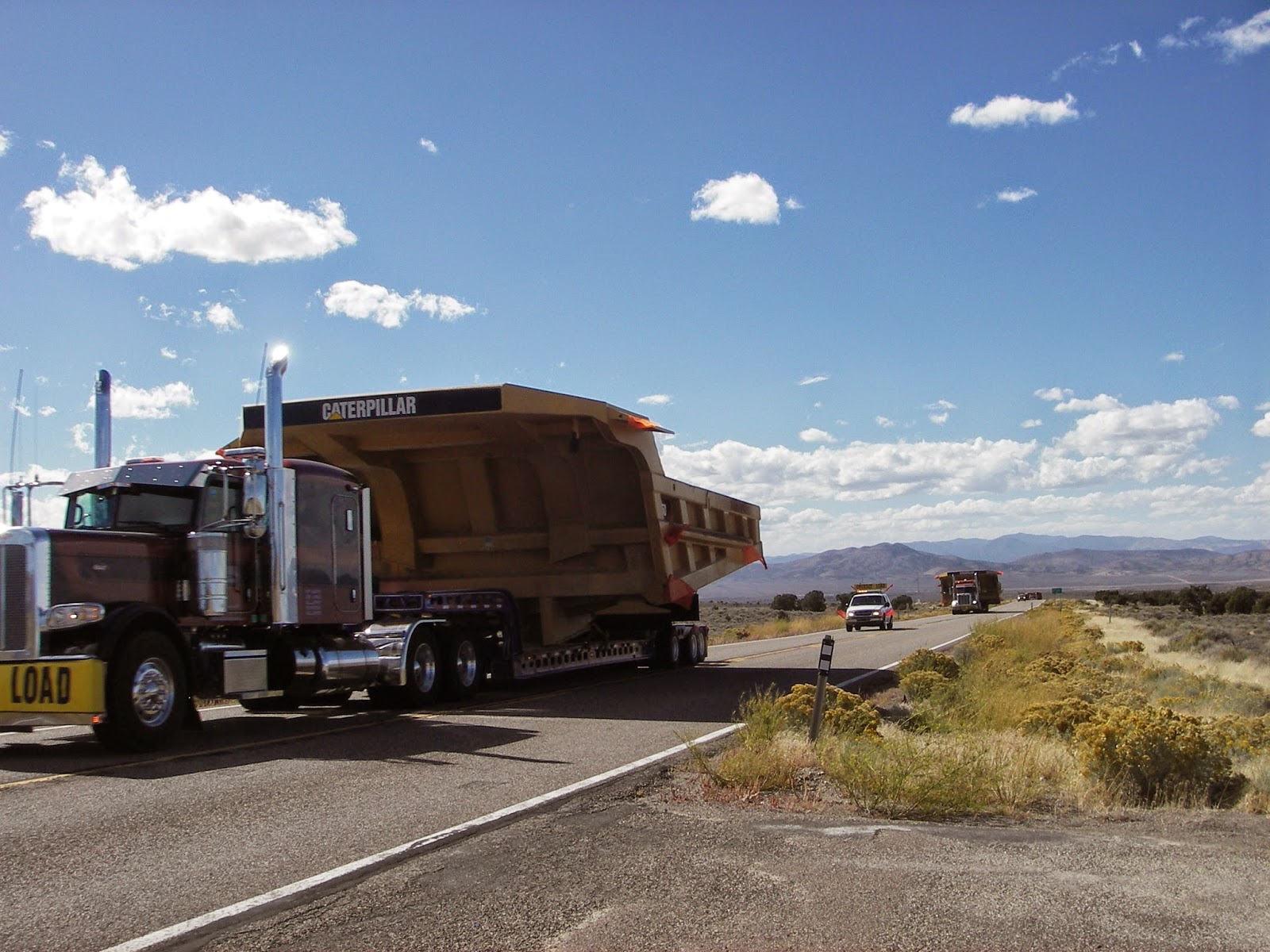 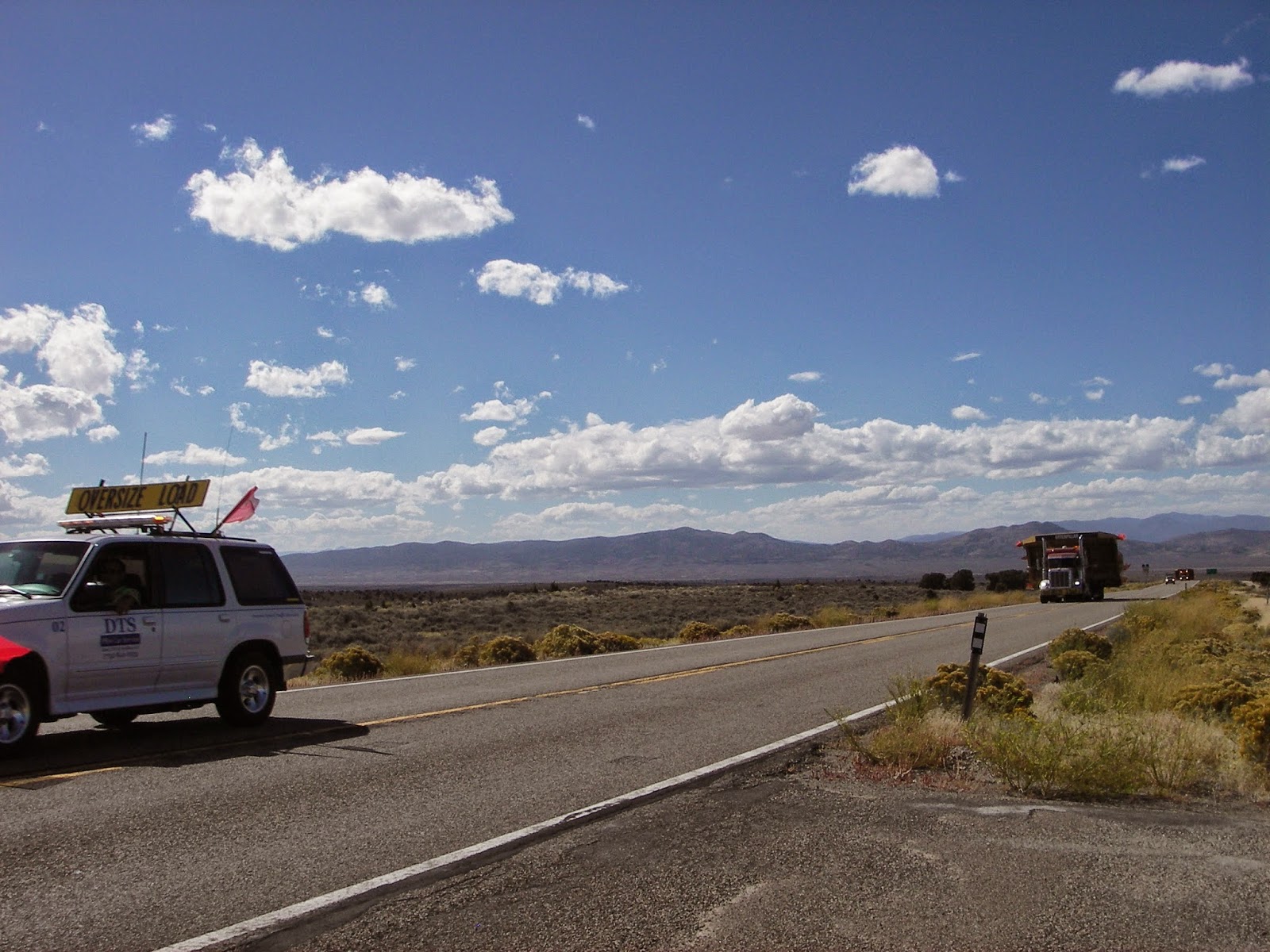 What I forgot to tell you, is it was windy in Ely but when I got out on Highway 50, the wind was brutal.  A wicked fierce wind.  It was coming from the south and I was headed west so for me it was a side wind.  You riders know the kind of wind I'm talking about.  You have to lean your bike into the wind to keep from getting blown off the road.  I had to tuck my head down because the wind was so strong I was afraid my helmet would get blown off with my head inside!!!!  Yes, it was that wicked.

It was especially fun when a semi truck or large travel trailer/motorhome would pass me in the opposite direction.  You get that nano-second of dead space followed by enormous turbulence as the vehicle finishes its pass.  It's about all I could do to hang on the handle bars and stay in my own lane.  This went on for miles and miles and miles and miles and miles.  My brains got rattled :-)

It was a special kind of relief to climb up out of the long, straight, windy valleys into some twists and turns of the mountain passes.  The terrain going up and coming down the passes sheltered the wind some and made the ride so much more pleasant.  I kept hoping that after I crested a pass and down the next valley, the wind would subside.  No such luck.

I finally rolled into Austin, NV.  I briefly considered spending the night there but the motel offerings are pretty poor.  And, I just wasn't ready to stop riding.  I was hoping to make it to Fallon, NV and then the ride to Gerlach would be pretty short, maybe 200 miles.  So I pushed on.

Although it had been incredibly windy, the skies had been blue and clear.  But not for long.  I could see a big storm up ahead of me.  I thought about stopping and zipping up my vents, covering my tank bag and doing those things you do before hitting rain, but I didn't stop.  First, as I previously stated, there are not a lot of good places to stop along Highway 50 and second, I figured it couldn't be THAT BAD.  I'd just ride through the pending storm.

Hahahaha, how many of you riders have said the same thing?  Yeah, I know....  Anyway, it was almost surreal how things changed so quickly.  I was riding along in the wind and sun when suddenly, I was in a cloud bank.  The clouds reached the ground and it was a heavy fog.  I watched the temperatures drops from 80 degrees to 55 in a few miles.  The fog was light and then it was heavy and then it was rain and it was dirty rain.  I turned on my grip heaters but motored on.  I felt like I was on a different planet, that's how much everything changed.

I considered stopping at Cold Springs Station.  They have a restaurant and rooms.  I've stopped there before for a meal and it is pretty nice, especially considering it is out in the middle of nowhere.  But, I really wasn't ready to stop.  I was sure I could make Fallon before nightfall.

I went off and on through rain and eventually saw signs of the weather clearing up a bit.  The fog stuff was eerie....I've never experienced anything like that before.  Anyway, I got through that stuff and realized I couldn't see crappola because my faceshield and windshield were covered in mud.  I needed to stop.

Fortunately, I was just at the Middlegate turnoff.  So, I turned off :-)  Middlegate is a weird kind of place.  They have a bar with food.  Sometimes a BBQ.  Sometimes rooms available. Sometimes the bathrooms work. You can play horseshoes in the dirt or just sit around and drink beer.  However, Middlegate has the absolutely best, wonderful, delicious Bacon Cheeseburgers and Fries I have EVER had.  So worth the stop.

I wasn't hungry but I did stop.  I pulled out the Plexus and cleaned my faceshield, windshield, mirrors and other bits.  Yay!!!! I can see again.  Here are a few pics of Middlegate. 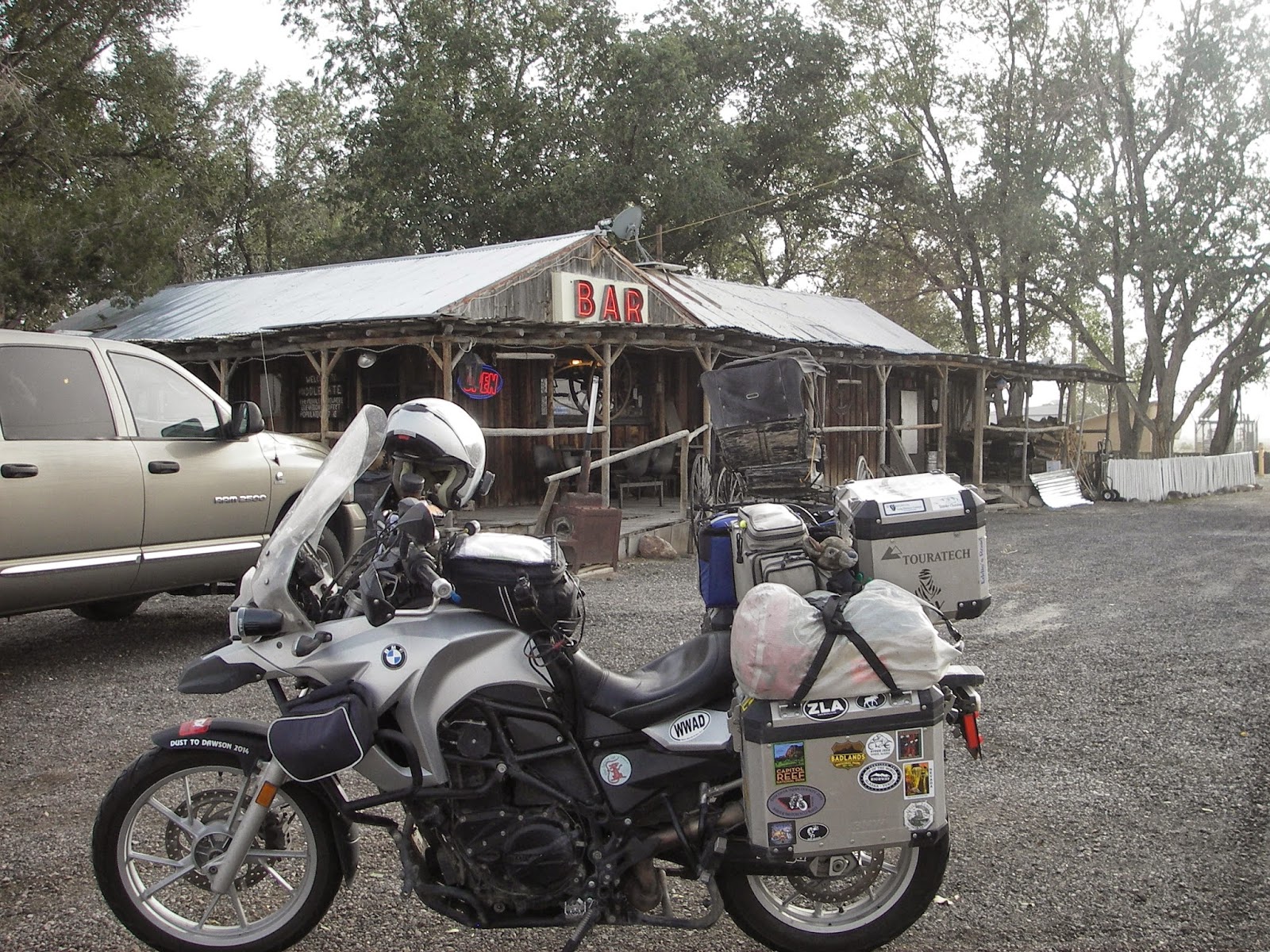 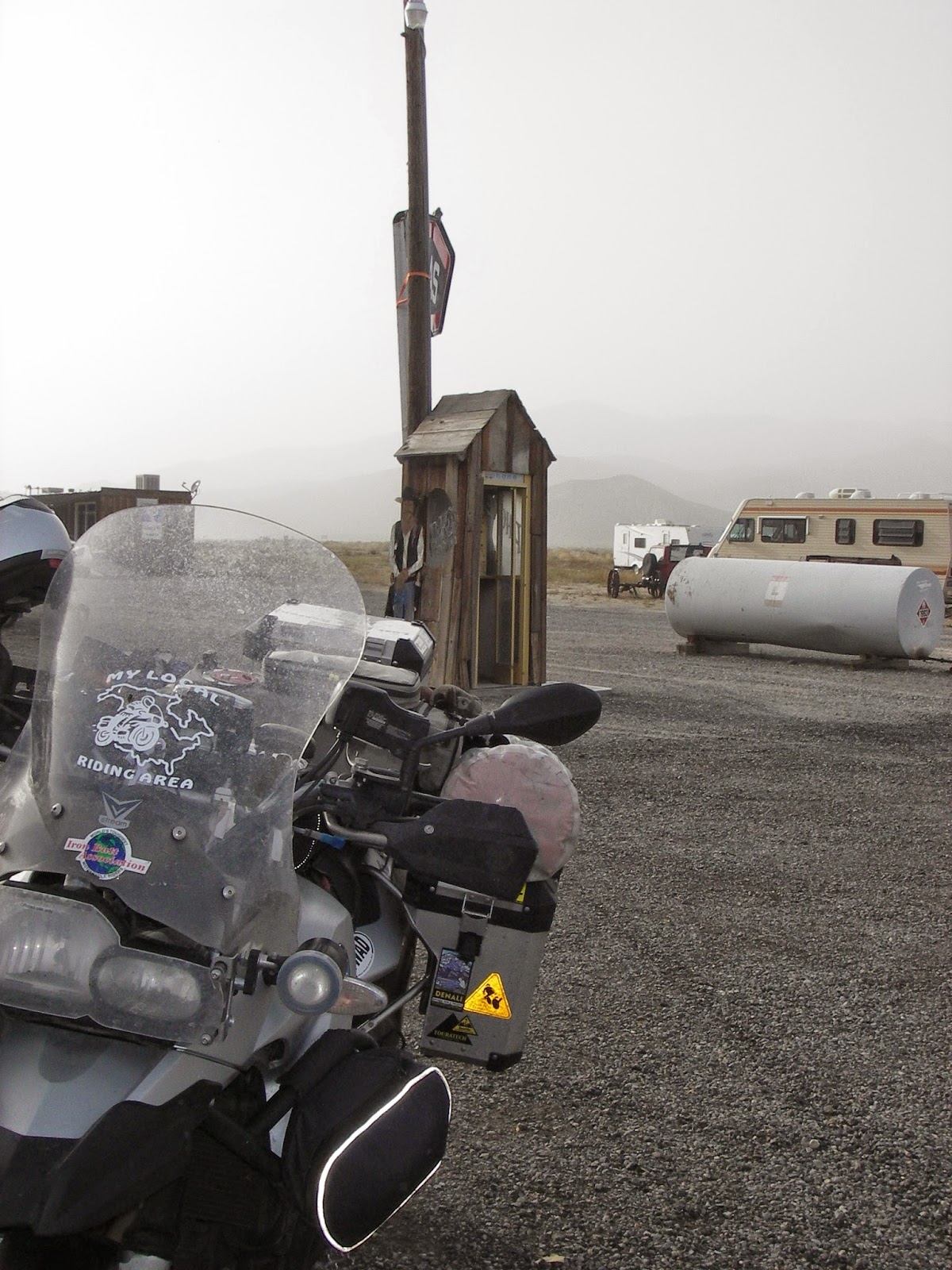 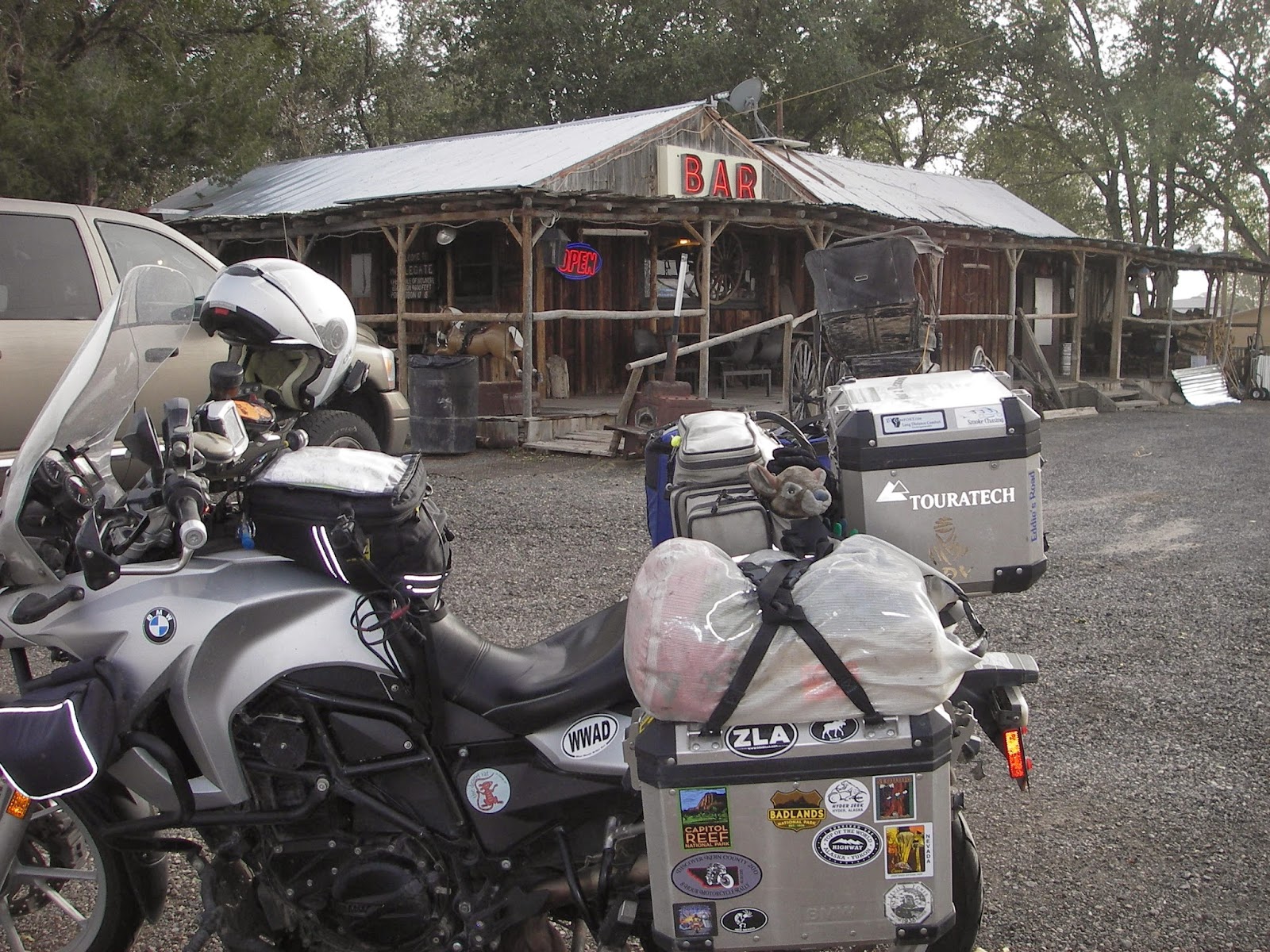 It has all kinds of unusual, cool stuff to check out.  They do have gas if you are desperate.  So, I took care of my business and headed out again to Fallon.  I was no longer in the fog and rain and the wind had died down considerably.  Actually, once I hit the fog, the wind disappeared!  Weird........

I finally rolled into Fallon and decided the Best Western was the place for me.  Got me a room with two queen beds (I know, I only need one), microwave, fridge, flat screen TV, free WiFi and continental brekkie.  Ha!

Got the bike unloaded, covered up and tucked in for the night.  Filled the ice bucket, made a cocktail and decided to sit down and write this blog.  And, it wasn't dark yet!!!!!  It is now :-)

So there you go.  My first day on my trip to Gerlachfest.  Tomorrow I will ride to Bruno's Country Club, get my room assignment and then ...... well ...... probably have a great time with everyone who shows up!  I know a couple of other riders are already there.  I also know that some very fun, silly, crazy activities are on the agenda for Saturday.

I probably won't have internet access at Bruno's so my updates may have to wait a few days.  Thanks to all of you who followed my Spot and my Blog.  Hugs!