Much to our surprise the Red Roof Inn did NOT serve brekkie of any kind.  Nada, nothing, no food.  Surprised because when we checked in last night we spied a very nice breakfast room with several tables and chairs and a nice space.   Hahahaha, we went there this morning and all they had was coffee.  All that space and no food, hahahahah, fuckers!  Oh well, we'll find something down the road.

Although we actually got up kind of early for us, it was still 82 degrees when we left at 7:45 am.  Yes, you heard that correct, we left before 8 am, lol.  And yes, it was warm......  We had no issues leaving Waco and quickly headed east.  Again, we tried to stay on smaller, two lanes roads and avoid the Interstate.  We started with the single digit roads, 6 & 7 over close to Lufkin, then graduated to three digits and followed 103 East across the last of East TX until it became LA 6 which took us to US 84 again for a fast run most of the way across LA before a short run on 425 into Vidalia.

All was good, we were on some lovely roads and the scenery was rolling hills and green, lush forests.  Who knew?  This part of Texas, while humid, was green with lots and lots of vegetation.  No more barren desert landscape.  Of course, the reason it's so green is the humidity and man, could we feel it!

About 10:30 or so we rolled into Crockett, TX.  Yes, it's named after that famous Davy Crockett!  (Apparently they haven't heard of Wendy Crockett yet...  😁) What's in Crockett, TX?  Well the Moosehead Cafe is in Crockett, TX.  Parking out front was all sloped so we rode around the block and found some flat parking at the side entrance. 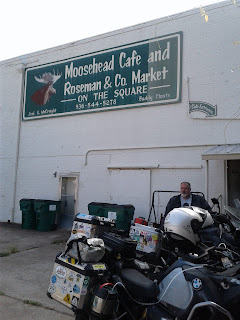 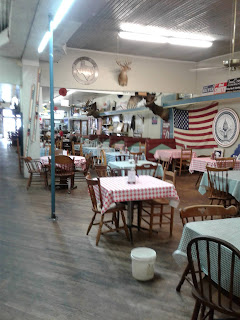 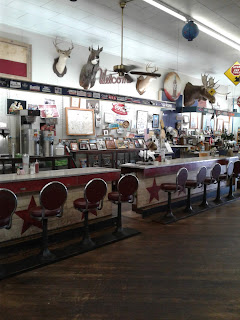 Such a cool place.  This dude in blue tee shirt and hat chatted with us at the side entrance door.  He is a regular and just came in for a cup of Joe. 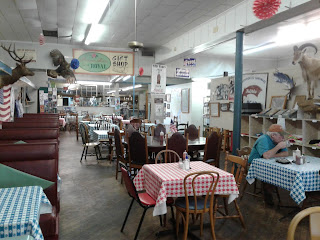 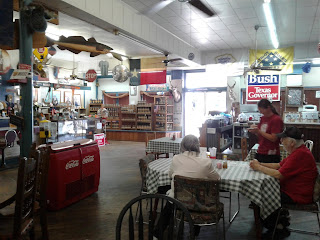 The Brekkie Menu!!!  Hooray, my favorite meal, breakfast.  Hope it's as good as it sounds!!!! 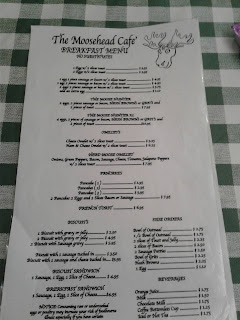 While waiting for our food, I went out front to get a photo from the main entrance.  So quaint and charming.  Crockett is a cute town! 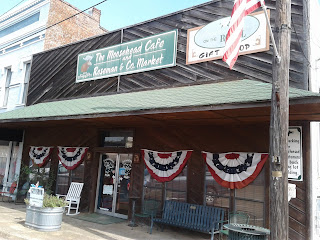 And then.....brekkie arrived.  Oh my goodness, bliss, joy, goodness, yummy, delish.......I ate every single bite (except I shared the hashbrowns with Eric, who ordered the same thing.  :-) ).  What a SCORE!  Another local eatery that was absolutely fantastic and reasonable (cheap).  So good and such a very fun atmosphere.  Great service and wholesome, great tasting food.  The bacon alone was at least a 8.8 on the Bac-O-Meter.  You must go here!  Moosehead Cafe 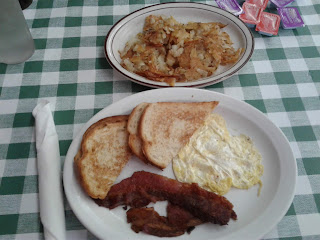 Leaving Crockett, we continued east toward Louisiana.  Sorry no pics but we didn't stop anywhere interesting.  Gas stations were about the extent of our stops.  The scenery continued to get greener as the temperatures continued to rise.  The humidity level was HIGH and we were both soaked in sweat.  Nice mental picture, huh?  I mean, so freaking hot that when we stopped the sweat would roll off my head and into my eyes, down my cheeks (face cheeks) and onto my shirt.  Gack!  It was freaking hot and humid.  I must have drank a gallon of water and still was sweating like crazy.  Hahahaha.  Oh well......part of the game, isn't it?  Makes for good memories!  Honey, you remember that ride when I couldn't see because of all the sweat running into my eyes?  Yeah, that kind of memory ;-)

NOTE:  Gear must be washed before wearing again.  Although I washed them in Grand Junction it is so bad now that it can stand all by itself in the corner and it smells kind of bad too!

We were on awesome two lane roads with not much traffic.  The ride was lovely even if we basically stayed within the speed limits.  We were disappointed to find the same highway in Texas was 75 mph only to find in Louisiana it was 55 mph.  Nothing changed except the state.  The road was the same.  Oh well, we slowed down..........

Our original goal was Winnfield, LA for the evening but we got there too early to stop.  So we topped off the fuel and motored on to Vidalia, LA which is just across the Mississippi River from Natchez!  Hahahaha, we were in Natchez a few weeks ago and from our current room in Vidalia, we can see the Natchez Grand Hotel and the other landmarks we visited.  Very fun stuff :-)

Comfort Inn & Suites in Vidalia, LA is quite nice with it's own restaurant.  Guess we'll be having dinner here tonight :-)  Tonight's Special is a 14 oz ribeye with all the fixin's, so splitting that won't be too painful!  Our room is awesome with a fantastic river view!  I'm loving this.  I would definitely stay here again!  Vidalia Comfort Suites 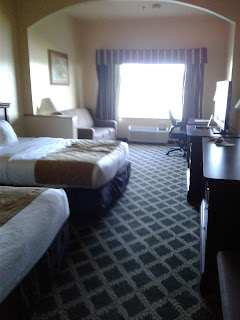 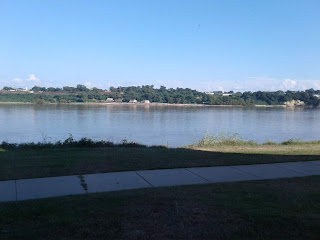 A tug with barges moving up river from our room view! 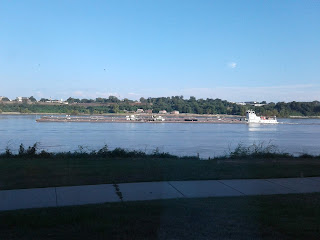 So that's a wrap.  Today we rode close to 400 miles.  A bit more than we have been riding but circumstances worked out such that we continued on.  We arrived at tonight's abode about 5 pm so that is good.  Settled into the room, had a cocktail or two and now we'll be heading off for dinner.

Excited that tomorrow will be the last leg home and we'll be riding the Natchez Trace the entire way home.  Yes, it's slow but it is so beautiful and the temperatures are a bit lower because of all the tree cover.  Looking forward to home but also looking forward to the bike ride there!

Stay tuned - who knows what may happen tomorrow!