The Best Western Plus at Dodge City, KS was superb and we enjoyed their brekkie before departing around 8:30 am.  Today was just sit there and twist that as we didn't have a single turn!  We rode US 50 all the way to our destination :-)  Originally, we planned on stopping in Pueblo, CO which was about 300 miles from Dodge City.  Things didn't turn out that way - but - wait - there is a story to tell.

We probably rode for an hour and a half or maybe more before our first stop in Syracuse, KS.  Not a particularly pretty place :-(  It's sad to see so many towns dying and decaying.  However, our stop was pleasant enough.  We had a potty break, a smoke (me) and a drink (both) in the shade.  Yes, it was already getting HOT.  Nice thing is, the heat in the west is a "Dry" heat as compared to a "Humid" heat and that's the truth folks.  The dry heat is so much more tolerable!  Anyway, here are a few pics of our first stop along US 50 in Syracuse, KS. 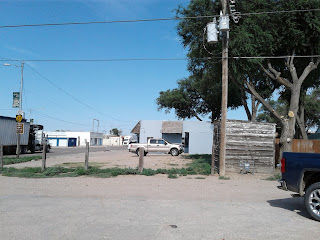 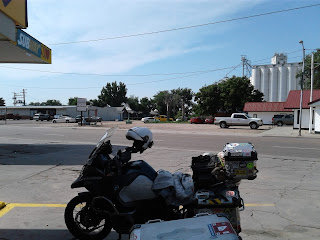 Feeling a bit refreshed, we motored on.  Since we were on US 50 and the speed limit was anywhere from 30 in the towns to 65 out of town, we made good time.  Very little traffic, good road and clear weather.   A few hours later we made another stop in Lamar, CO.  What a cute town.  We stopped at the visitor center to grab a map and look around.

I kind of think this train engine might be a HW3 bonus!!!!  A beautiful stop, the grounds are manicured with nice exhibits.  The peeps inside the Visitor Center were so friendly and helpful.  They were fun to interact with.  If you go through here, please stop.  It is worth your time :-)  Lamar, CO 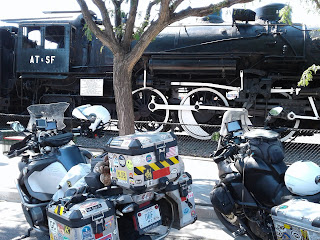 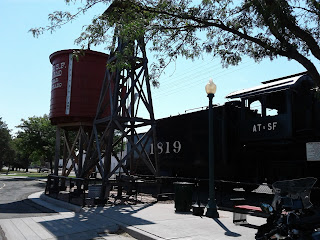 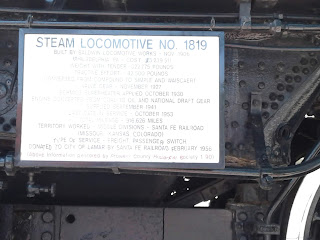 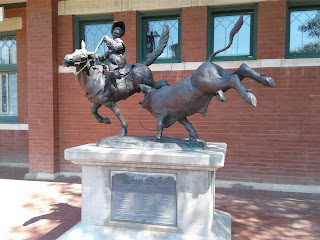 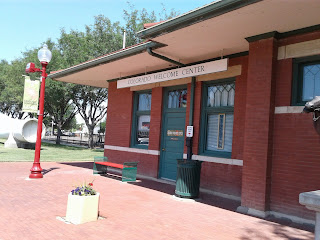 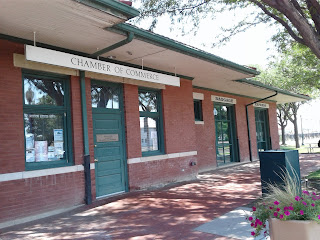 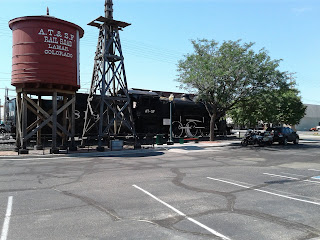 Cute, huh?  So while we were in the parking lot an older gentleman came up to us to talk motorcycles.  Oh, he was so awesome!  He was wearing a shirt that said "I Survived the Loneliest Highway in America, US 50"!  Well, that was a great conversation starter :-)  He still has a stable of bikes but no longer rides.  We had a great time visiting!  Isn't crossing the country, making random stops, meeting random peeps just the best thing ever?  Yes, it is! 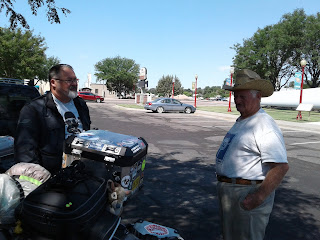 Okay, we finally left Lamar and motored on US 50 at a brisk pace until we both decided maybe it was time for lunch.  We had crossed the time zone and had gained an hour and even though it was a late lunch for us, it wasn't late for this part of the country :-)

GPS gave us several options in La Junta, CO.   We weren't into fast food and love stopping at local places.  So Boss Hogg's Saloon it was.  The good sign was the number of cars in the parking lot.  Okay, let's try this! 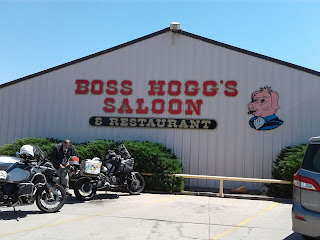 Sorry no interior pictures or pics of lunch but suffice it to say it was delish!  We shared a bacon cheeseburger and fries.  The burger was really good.  The atmosphere, meh, okay.  Reasonable price and full bellies, we were happy :-)

Back on US 50 motoring along at 65 -70 mph, making really good time.  We flew through Pueblo which was 101 degrees HOT!!!!  At that point we made the decision to keep on going.  It was only about 2:30 pm, a bit early to check into the hotel and we simply weren't ready to stop.  So there we go up into the mountains of Colorado!

Time for a break - we stopped somewhere along the Arkansas river.  We had seen tons of rafts, canoes and kayaks on the river and looked like peeps were having a ball.  About this time, the weather turned a bit nasty and we could see some rain in our future! 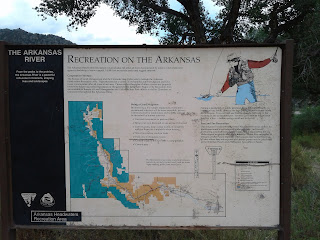 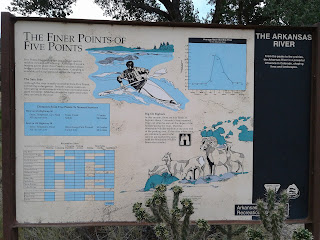 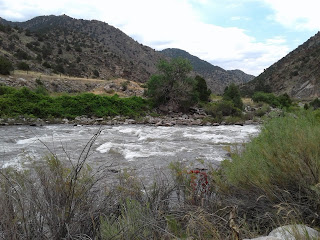 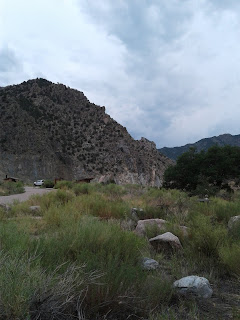 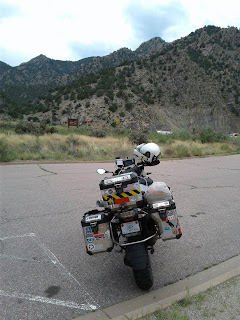 Just after our rest stop we got rain.  Not hard rain, but enough to get a bit wet.  The temperature went from HOT to to 61 degrees!!!!!  Yeah, in about 50 miles we went from 101 to 61, hahahahahaha.  No problem, we're always prepared.

Salida was a welcome site as we were ready to call it a day only 100 plus more miles than planned.  We made a quick stop at the Walmart and loaded up on tonic (for my vodka drinks) and picked up a couple of fresh salads for dinner.

On our way through town to Walmart, we spied several potential motels and decided on this one, the Silver Ridge Lodge.  A very cute, clean, independent motel.  I would definitely stay here again!  Super nice.  Silver Lodge 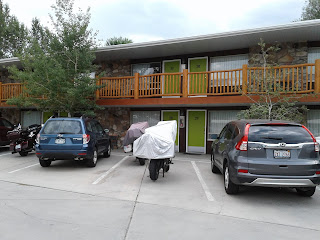 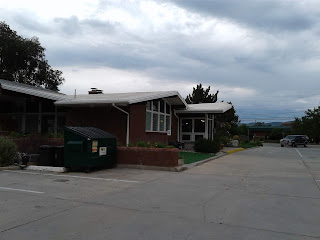 I spied an old (1969) Ford Bronco in the parking lot and when I went out to have a smoke, I   happened to encounter the owner.  An awesome dude from Kansas.  Oh did we have the best ever conversation!  He was outside having his snort of whisky and we started to chat.  I could write a chapter about this guy.  He made me happy and I hope I brightened his day too!  Maybe I'll go out again and sneak a photo or two! 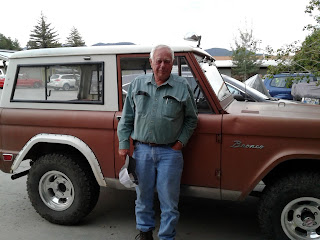 An interior view.  All loaded up with camping and fishing gear.  Just look at the dash!  Hahahahaha, love this, roll up windows, three on the tree, get outside and lock in those hubs and it has a winch on the front.  How freaking cool is this?? 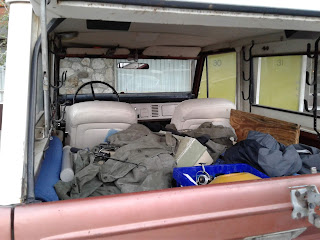 Yeah, I just had to go back outside and seek out Bob again.  I so enjoyed meeting him.  I gave him a DFF sticker and then told him what a DFF is.  He laughed and laughed!  My kind of guy :-)  He promptly put my sticker on his Bronco!!!!  I'm in love :-) 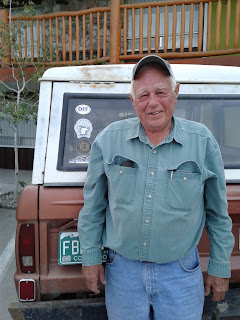 Well, that about concludes this fabulous day.  Great ride, 100 or more miles than we intended.  Stopped at an awesome motel in Salida and met Bob.  Life is good!

Tomorrow will find us in Grand Junction for the How the West Was Won Rally after a glorious (I'm sure) ride through the Rockies to get there.