Another beautiful day full of beautiful people :-) Oh, and beautiful bikes!  We didn't have any particular plans for the day.  We intended to be social and kick tires and partake in a meal or two.  So today's report will be all about that!

We ran into Lisa and Steven Rufo as they were checking into their room.  Honeymooners they are and the glow shows! 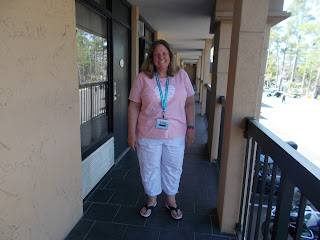 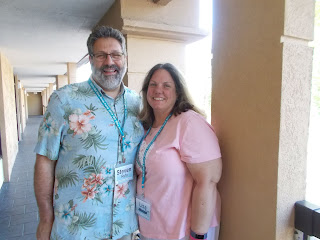 The lobby was teeming with Iron Butt riders.  Some looked very excited to be here! 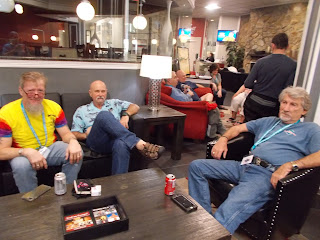 Some seemed more concerned about their hair or lack thereof ;-) 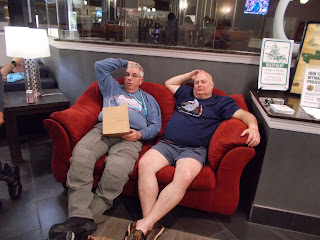 Some were just holding up the wall or holding down a chair. 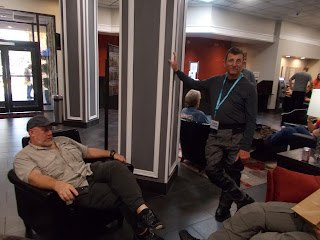 And others (Like Howard E.) was just happy to be here, sitting on the porch watching the world of beautiful people and beautiful bikes pass by. 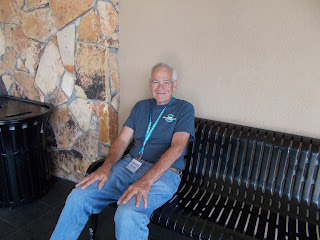 Bikes continued to arrive at the venue. 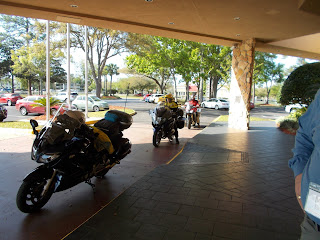 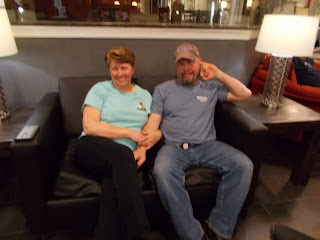 And this expression for when Joanna smacks him and tells him to look pretty for the camera! 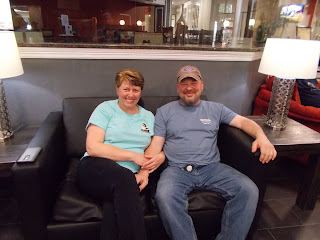 Oh yeah, everyone wanted to get in on the photo shoot! 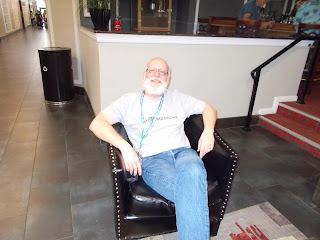 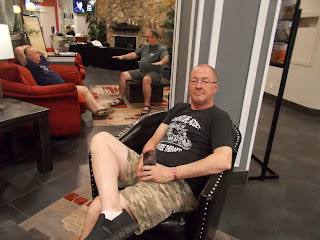 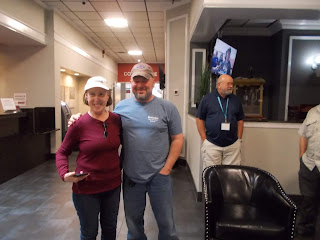 .
And then there is my honey, Eric.  Can't get enough pics of him no matter what.  Here with Dale B. 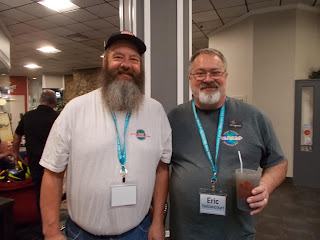 Besides the lobby peeps were hanging outside.  So much to see, so many peeps to chat with, so many stories to tell.  It was all good.  No, it was great. 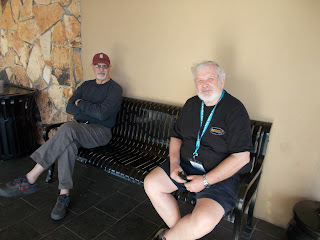 Eric with Mike R.  Always love to see Mike R. at an event. 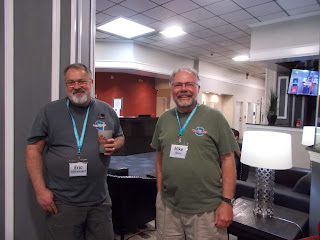 Chris R. being laid back.  Actually there are like at least 5 guys named Chris.  And two of them are Chris R.  This is Chris R. #1. 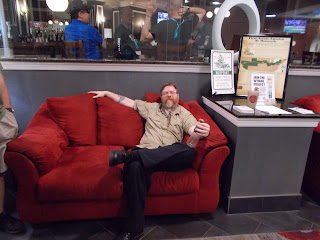 More newlyweds!  Jim and Janet Owen.  I love that I know at least six couples who are together because of the Iron Butt Association and events like this.  How awesome is that?  And, Jim was the Iron Butt Rally Winner in 2009 and 2017.  They only rider to win the Rally twice (so far).  For those who don't know, the Iron Butt Rally is a 11 day, 11,000 miles (or more) rally held every other year.  It's the top of the mountain for IBA Rally riders, the Big Dance! 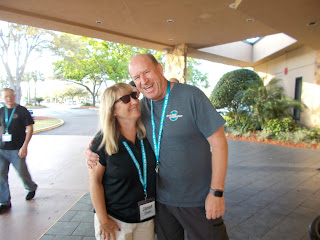 More peeps hanging out front of the hotel. 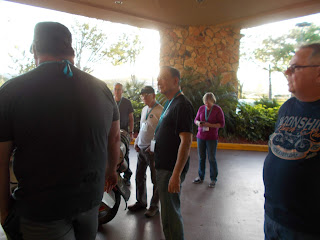 There was no formal dinner this evening so everyone kind of scattered.  Eric and I, along with 9 other folks went to Trent's Seafood for dinner.  We were lucky to have Barb S. give us a ride.  Not too far from the hotel, we were there in about 10 minutes.  Located down a side road with little to no ambiance, lol.  Here is the bar we parked in front of. 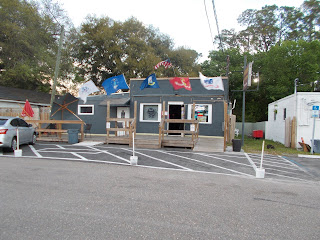 And here is our approach to Trent's.  Side note, I counted at least 10 cats, yes kitty cats, lolling about the road, parking lot and porches surrounding Trent's.  Guess they get to clean up any leftovers! 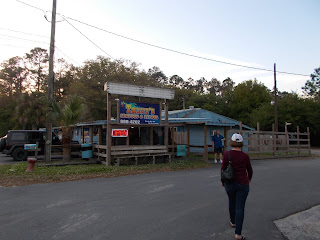 The Naval Air Station is located quite close and we had quite a show of low flying aircraft as they made their landing approach.  That was kind of cool! 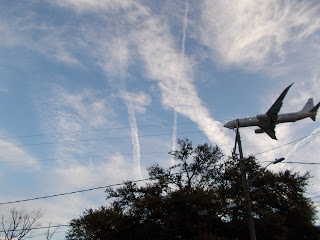 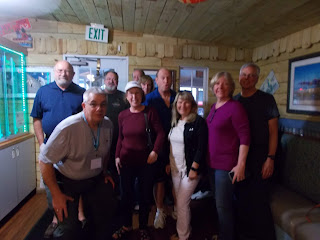 Just a few interior shots to give you a feel for the ambiance of the place.  Very low key. 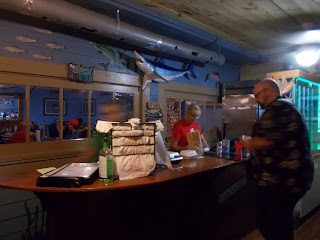 Lots of menu choices.  Actually they had things available that were not on the menu and were sold out of some things listed on the menu.  For some, it was "Guess Your Dinner" :-) 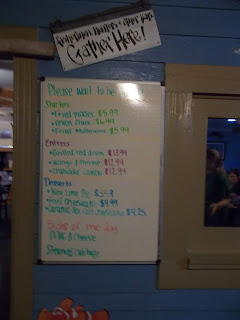 A couple of exterior shots. 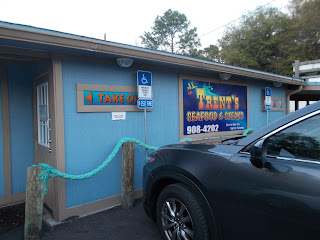 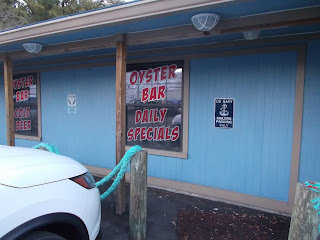 A lumber yard and maybe a church across the street.  Maybe the church was a private home.  Dunno, there was no signage. 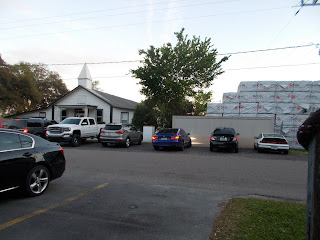 Ah, food arrived.  And, it arrived on serving trays, platters and baskets. And, there was a LOT of it.  And, it was GOOD!  And, it was MESSY, lol.  Thus the rolls of paper towels on the tables. 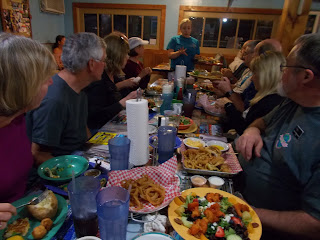 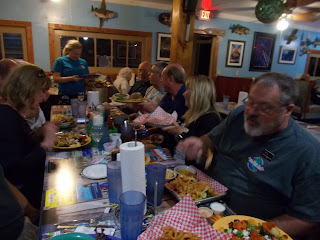 Oh, my.  We had a feast.  Oysters, clams, shrimp, lobster, scallops, fish, mac & cheese, onion rings, green beans, salads, hush puppies, fries, baked potatoes, greens, grits, and more.  Can you believe it?  Some peeps actually topped it all off with dessert, key lime pie, salted caramel cheesecake, and more.  Gack!  I was too stuffed for dessert.

As were finishing up dinner the lights went out!  Yes, the lights went out!  This is apparently a recurring event and fortunately they had emergency back-up lighting over the exits.  So, dessert was had in a romantic low light and our dinner checks had to be prepared by hand because of course the computers were down.  Hahahaha, good fun.

After dinner, back at the host hotel, Eric and I decided to walk around the hotel and maybe work off some of that awesome dinner.  We didn't make it 50 feet before we ran into peeps and started chatting.  Well our target bedtime of 10 pm became midnight.  So much fun, so many stories, so many wonderful peeps.

Tomorrow the riders who are doing a certificate ride, Saddle Sore 1000 or Bun Burner 1500 will be completing their ride and I'll be doing some of the scoring for those riders.  I'm looking forward to that.   Oh, I hear there will be free beer for a while followed by awards and a banquet. So, check back tomorrow to see how everything goes.

Thanks for following along and cheers my friends!