Today was to be a transition day.  No tourists activities planned today.  We were heading north along the gulf coast.  We really wanted to avoid the interstate as much as possible.  We left North Ft. Myers about 9 am and guess what?  Yes, it was raining again, hahahahaha.  Nah, really is was just a heavy mist that left a lot of water everywhere ;-)  No worries, it didn't last long.  What did last long was the miles and miles of stop and go traffic as we navigated Highway 41 west and north.

Oh my heck!  The traffic was non-stop.  Oh no, actually it stopped, a LOT!  We certainly got lots and lots of slow riding skills practice.  My clutch hand is very, very strong, don't mess with me, lol.  Fortunately the temperature was moderate in the upper 60's, low 70's so we didn't bake in our gear at all the slow riding and stops.

How slow was it?  Well, we stopped for a break and to take off a layer of clothes 80 miles from our departure.  That was THREE HOURS to go 80 miles.  Yup, it was that slow ;-)

The fun stuff was riding through the marina at Sarasota right by Bay Front Park and Marina.  That was soooo nice.  I like Sarasota.  I didn't mind our downtown ride through for that part of the day.  Maybe sometime we'll feel flush enough to spend a few days there in one of the waterfront resorts.

Still in traffic and stop and go.  Lights every block that were never synchronized.  Yes, lots of slow riding practice.  I was hoping we would make it to Perry, FL today but that was not going to happen.  Good thing we're retired, hahaha.

We took a little break in Memphis, FL. 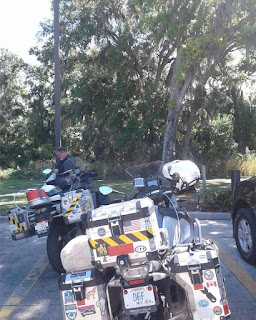 We weren't quite sure if we were on the right road because our map was a regional map and didn't show the detail we wanted.  Eric went in the store to buy a map of Florida but they didn't have any.  But guess what?  He actually asked directions!!!  Yes, he did.  Fortunately, we were only 1/2 mile from our turn so all was good. 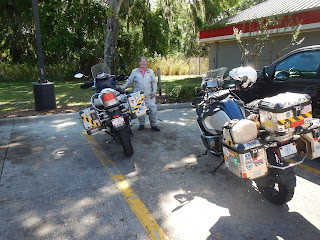 Our goal at that time was to get on Highway 19 which would take us all the way north to I-10.  Oopps!  Highway 19 is also I- 275 for a short distance which was a toll road and we didn't have our pass.  Fortunately the toll was only $1.50 per bike and we were pleased that our total toll expense in Florida should only be $3.00 ;-)

Bonus, I-275 took us over the Sunshine Skyway Bridge.  Ooohhhhh, what a treat! Fantastic, gorgeous, super duper, over the top awesome bridge.  Grinning ear to ear, I loved this part of the ride and the speed picked up to a reasonable 65 mph which was way better than our 30 mph average of the past three hours.

Eric took this first picture from his bike as we were riding across the bridge. 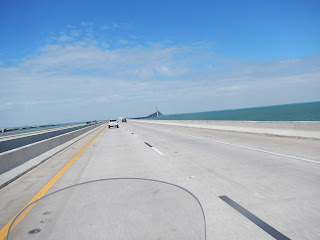 These photos below are stock photos from Wikipedia.  Such a masterpiece.  I love riding over bridges and the bigger and more spectacular the better.  That makes me happy :-) 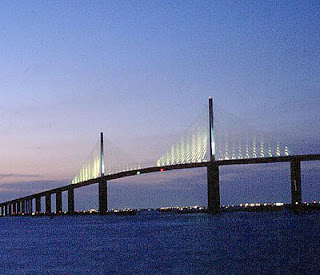 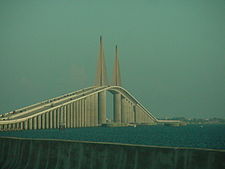 Yesterday, Eric's Sena died (our communication system).  It had been heading downhill for quite a while and we think the rain yesterday just totally killed it.  It wouldn't work even after we dried it out.  So, for all of today and most of yesterday we didn't have any comm.  We managed to stick together and didn't crash into each other or anything but it sucked not being able to communicate.

I can't tell you how many times I said something to Eric and then yelled it and then realized he couldn't hear me, hahaha.  Frustrating!  So, in Pinellas Park, FL, Eric spied a Cycle Gear and pulled in.  Like a dutiful wife, I followed ;-) (SNORT!) 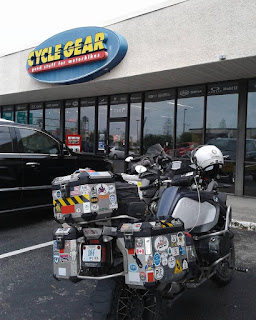 Of course they had all the latest Bluetooth comm stuff and we settled on a new pair of Sena 20S Evo units. We briefly considered the latest JBL speaker Cardo offering at a nice price, but didn't want to spend time leaning a new system.  The store dude, Dillon, installed the units for us in both our helmets.  The install was taking FOREVER so we walked down the strip mall to a Honey Baked Ham Company store and had a delicious lunch.  I had a 1/2 chef salad that was loaded with ham, turkey, bacon, spinach, cheese, cucumbers and tomatoes (I left the tomatoes off but Eric had them on his 1/2 Chef salad).  Honey mustard dressing.  Yummy.   I really needed GREEN food today and that was just perfect.  Eric had a half ham sammy on a croissant and a 1/2 chef salad.  Lunch was awesome.

After lunch, our helmets were almost ready.  I'm kind of a perfectionist and noticed my Schuberth helmet liner was not sitting properly inside the helmet.  I pointed this out to Dillon and also suggested to Eric that he try his on before we left.  Dillon saw the error of his ways and spent another 10 minutes getting my helmet right.  Great!  We left with new Sena units fitting well in the helmets and best of all, working comm!

We spent some time in the parking lot pairing everything.  I was insistent that my music work.  I wasn't leaving until I had tunes in my helmet!  Yay!  It all worked.  Eric and I could again talk to each other and I could listen to my music.  Although it was an expense we weren't expecting at this time, it was worth every penny.  Besides, it was something we were ultimately going to do anyway ;-)

So, back on Highway 19.  More stop and go and more slow riding skills practice.  Eventually we landed at the Best Western in Crystal River, FL, a rather toity resort hotel.  Fortunately, I am a Gold Elite Best Western member and that coupled with our AAA membership got us a decent rate on a nice room.  A bit more than we would normally spend for a room but after the slow, slow, slow slog today, we deserved a bit of a treat ;-)

Although we didn't do any tourist stuff today, it was still all good.  This is what memories are made of.  I'll never forget the long, slow, slog that got us maybe 200 miles in 8 hours.  I think that's a new record for us.  Hahaha, and we're Iron Butt riders, hahahahaha.  That makes it even more hilarious!!!

Guess tomorrow will be more of a transition day as we move north and toward home.  We don't really have any other tourist activities planned but maybe something will pop up!  You never know!

Thank you so much for following along.  We're having fun and that's what it's all about.  Oh, I want to make a Hokey Pokey pun here, hahahaha.

Check in tomorrow and see what's new!  I keep forgetting, you can follow our SPOT tracker and see where we are and where we've been.  Hope this link works.  Cletha's Spot.