June 12 - Ely, NV to Ontario, OR - Just Racking Up the Miles to our Destination!

Well, we actually got up at a decent hour, maybe 6:30 or so.  Got showered, packed, bikes loaded and ready to roll.  I have to have my coffee in the morning to feel awake and ready to face the day and fortunately our room had a coffee service.  So I made a little pot.  Unfortunately, it was full strength caffeine and I don't do caffeine.  Haven't done caffeine since about 1976.  Nope, no caffeine sodas, coffee or anything.  Silly me, I had decaf packets in my cooler but figured, heck, a cup or two won't hurt.  WRONG!!!  We finished loading the bikes, geared up and headed out.  I had cotton mouth and the shakes immediately.  Yikes!!  Not good.  I kept drinking water as we rode which I'm sure helped subdue the caffeine. Okay, I learned my lesson - NO CAFFEINE for Cletha :-)

I'd like to say today was an incredibly exciting, wild, crazy day...but it wasn't.  We opted to ride for 100 miles or so before we stopped for a meal.  We headed out from the Four Sevens going north through Ely, NV to Hiway 93 (the same one that took us to Ely).  The weather was calm and not much traffic at that hour.  However, it became quite evident that this portion of Hiway 93 was well traveled with a LOTS of Semi Trucks and other traffic.  Much busier than yesterday.  We had ample opportunity to make passes safely, which we did.  We ran about 3 miles over the posted limited and got passed plenty ourselves.

We rode about 100 miles from Ely and stopped in Wells, NV for a meal at this place. 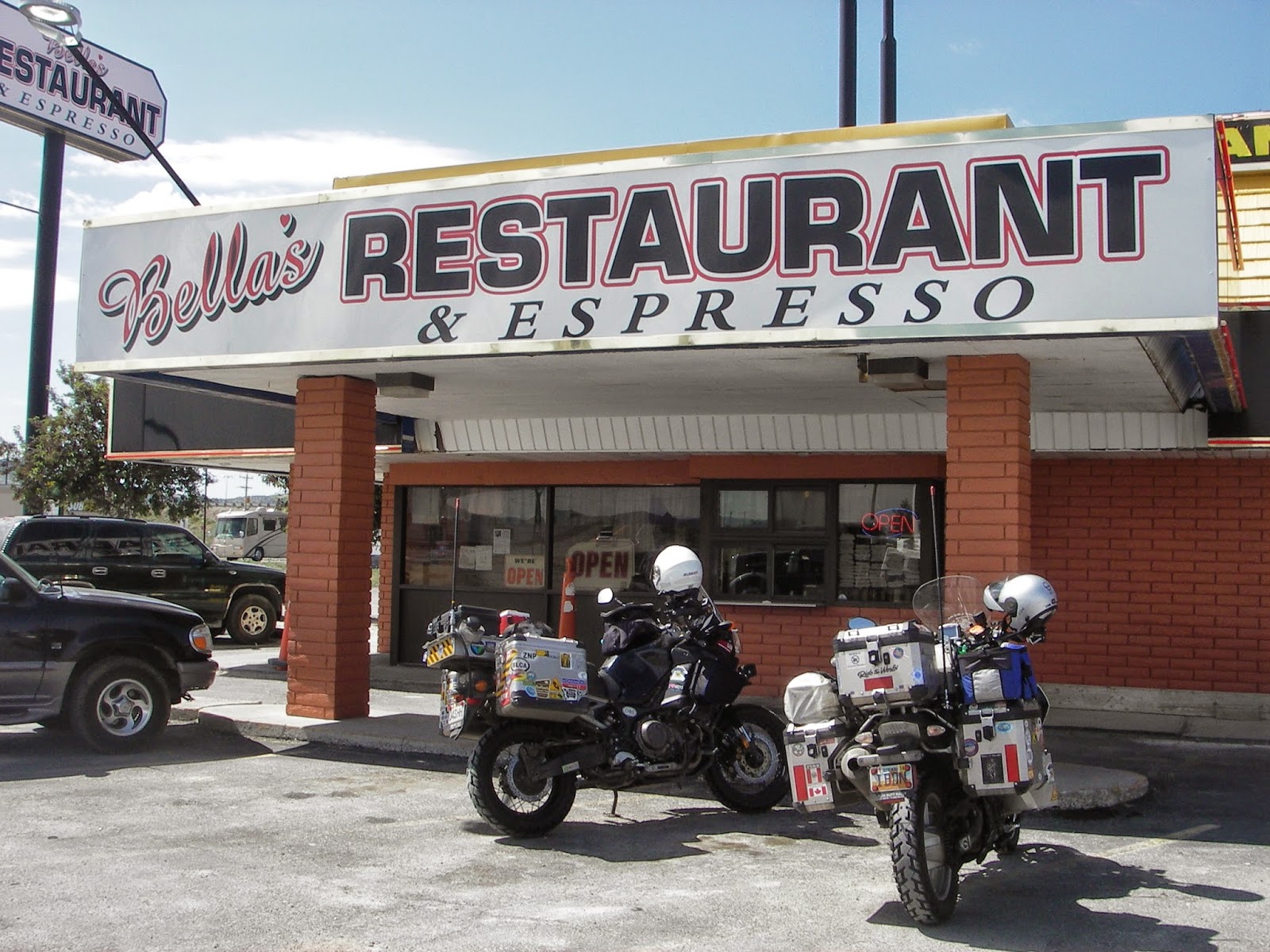 It looks like a dive and frankly, it is :-)  However the food was delish.  It was clean and the service was very good.  We ordered a breakfast that we shared.  Folks, $20 + for 2 pieces of french toast, 3 pieces of bacon, two eggs split between two people?  Oh, yeah, we ordered a side of bacon for $5.70.  I drank water and Eric had a small coke.  The bacon was lovely as was the entire meal.  But, hey, $20+ for a single meal shared between two people......  Okay, rant over.  It was good.

It was here that I looked over the bike, making sure all was good and tight.  And then I noticed my gas cap was missing!!!!  Yikes!!! Missing....  Now, to be up front about this, I have a race cap for a gas cap.  The original keyed gas cap is something that breaks almost immediately and costs a lot to replace.  I opted for a race cap, no key, just a threaded cap.  It makes all my gas stops much quicker and no problem.  In the past few years, two have gone missing.  Hahaha, I have to tell you, both times Eric was riding my bike when they went missing :-)

But, this time it was ME.  Dang...well, I had a spare taped to the inside of my top box so I pulled that out of its packaging and twisted it on the opening.  I told Eric and we both agreed that maybe the combination of the new Heidenau knobby tires and the speeds we were riding might contribute to a vibration that could cause the gas cap to become loose.  Okay...I'd be watching that baby really close from now on.  No more spares and only about 20 something more days to ride!

We left Wells with full tummies and headed north on Hiway 93.  I'd like to say it was a crazy, interesting ride, but it wasn't.  We just slogged along.   We hit a construction zone that said maybe a 30 minute wait.  Ick.  It was getting HOT and the wind was starting to blow.  Fortunately it was only about 15 minutes.  Hey, after a few minutes of waiting, Eric ran up to the front and politely asked if we could move our bikes to the front.  The flagger said no problem, however by the time Eric ran back to the bike, the oncoming traffic was visible, so we couldn't.

NOTE:  If you're in this situation, politely ask the flagger if you can move your bikes to the front of the line.  Eric told the flagger that we would pass the folks (semi trucks) anyway and it would be nice if we could just move up.  The flagger was good with this but see above.  We were too slow :-)  It all worked out anyway.  But just a tip.

After we followed the pilot car we were able to make some nice passes around two semi trucks and some slow drivers and get up to a reasonable speed.  We motored on....through not so scenic scenery :-) Then the wind picked up and we had not so nice side winds from Wells to Jackpot. 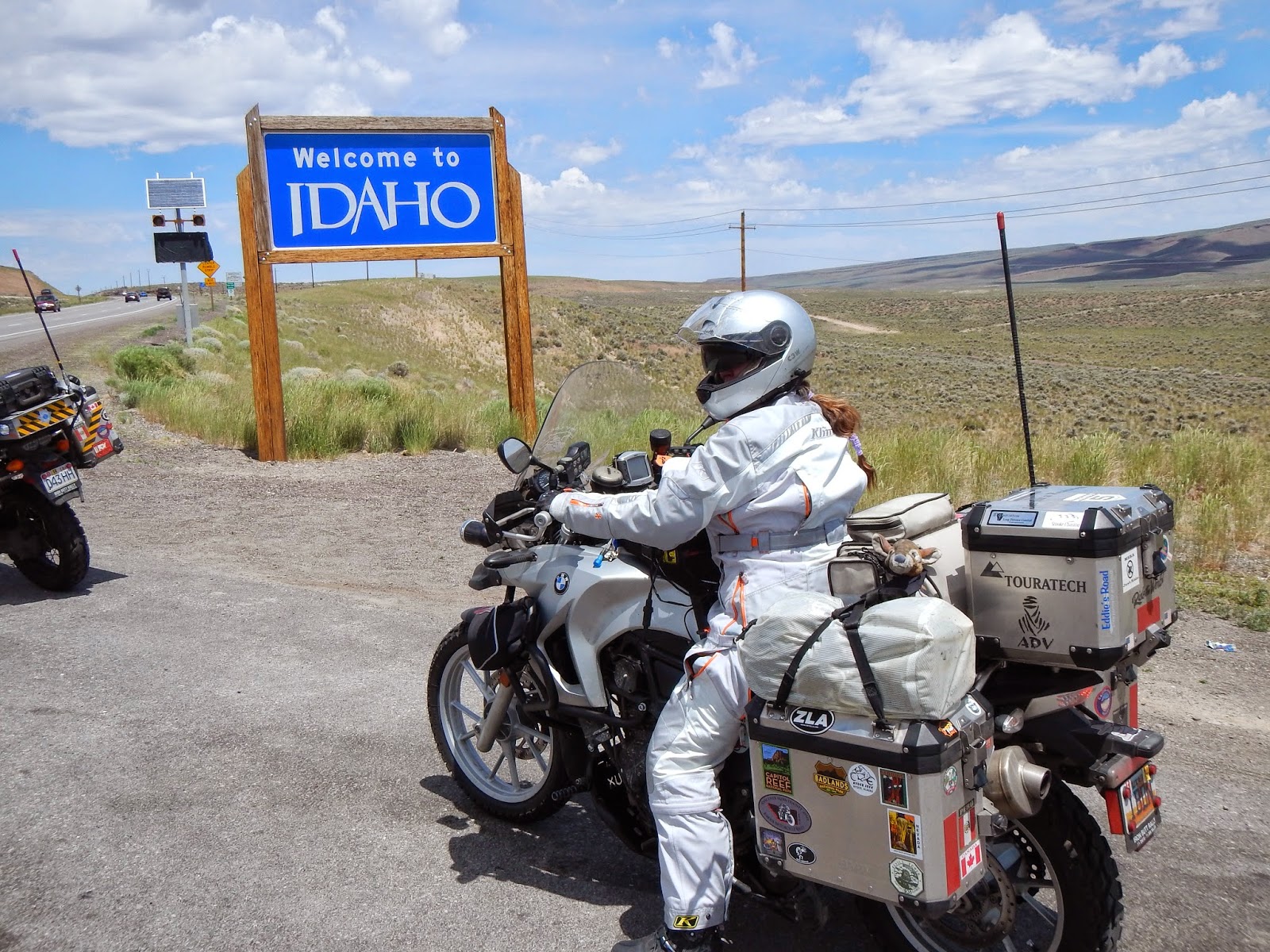 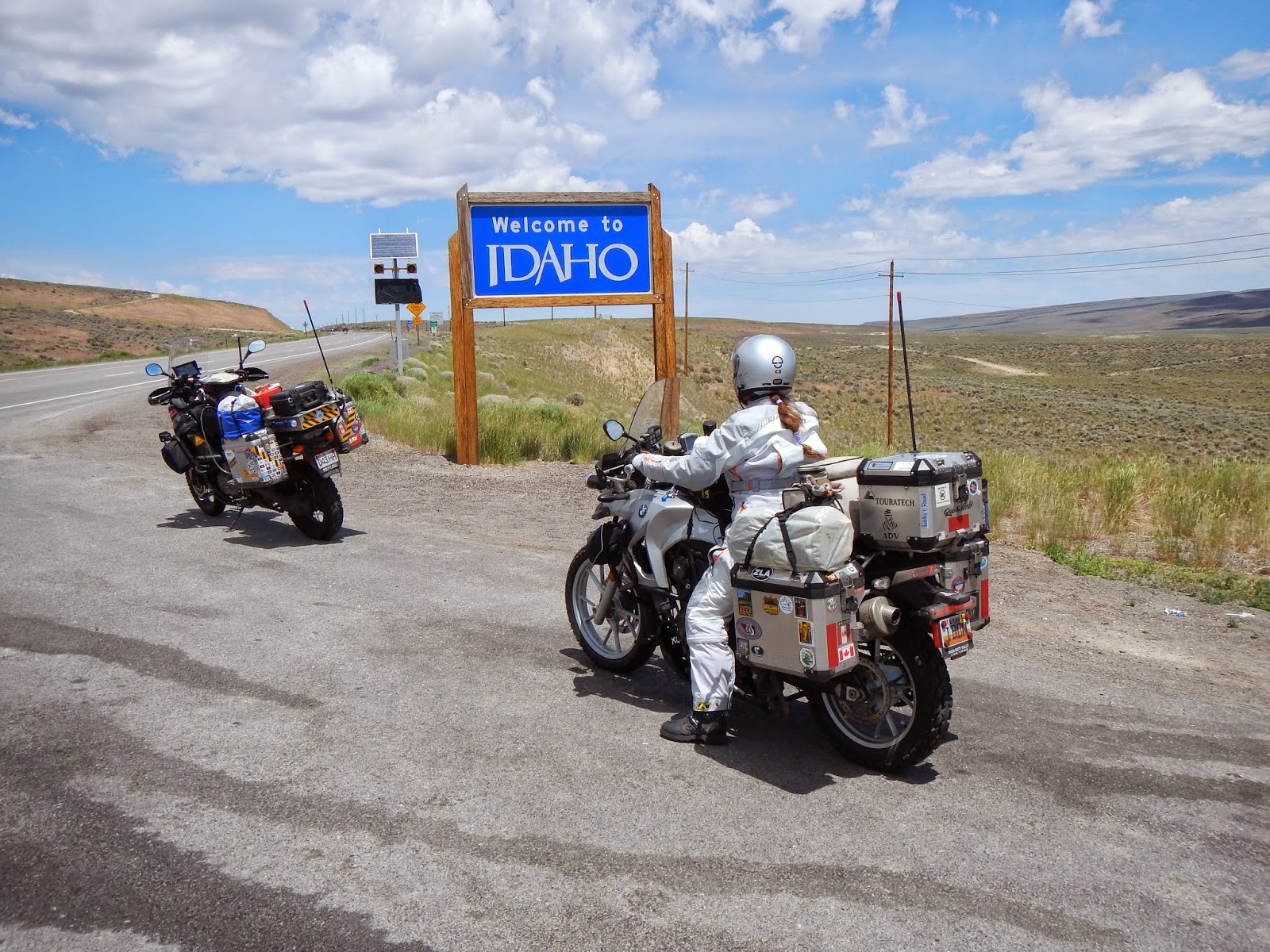 My hand got really tired holding up this building in Nevada. 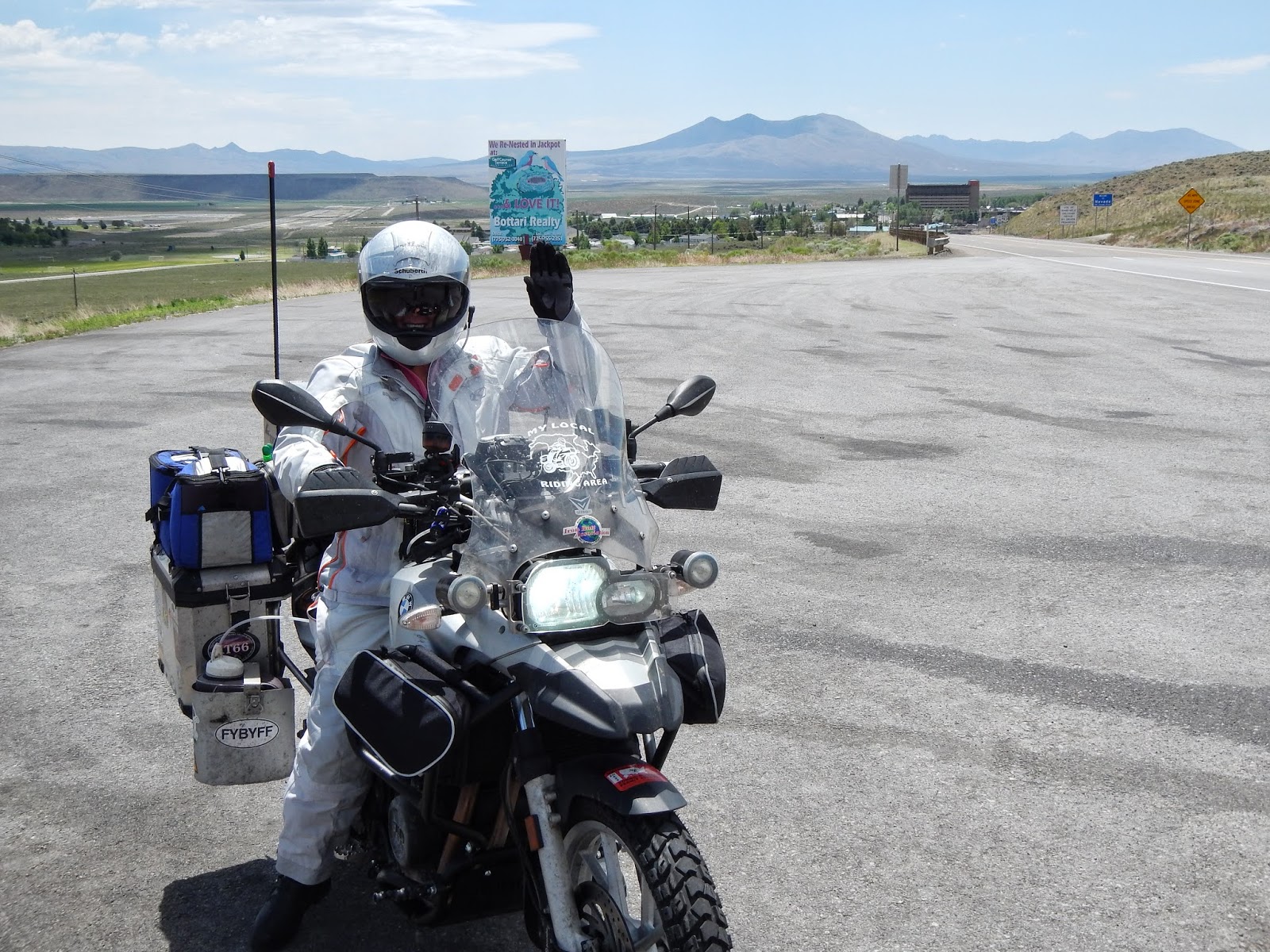 So I dropped that darn building so I could wave goodbye to Nevada! 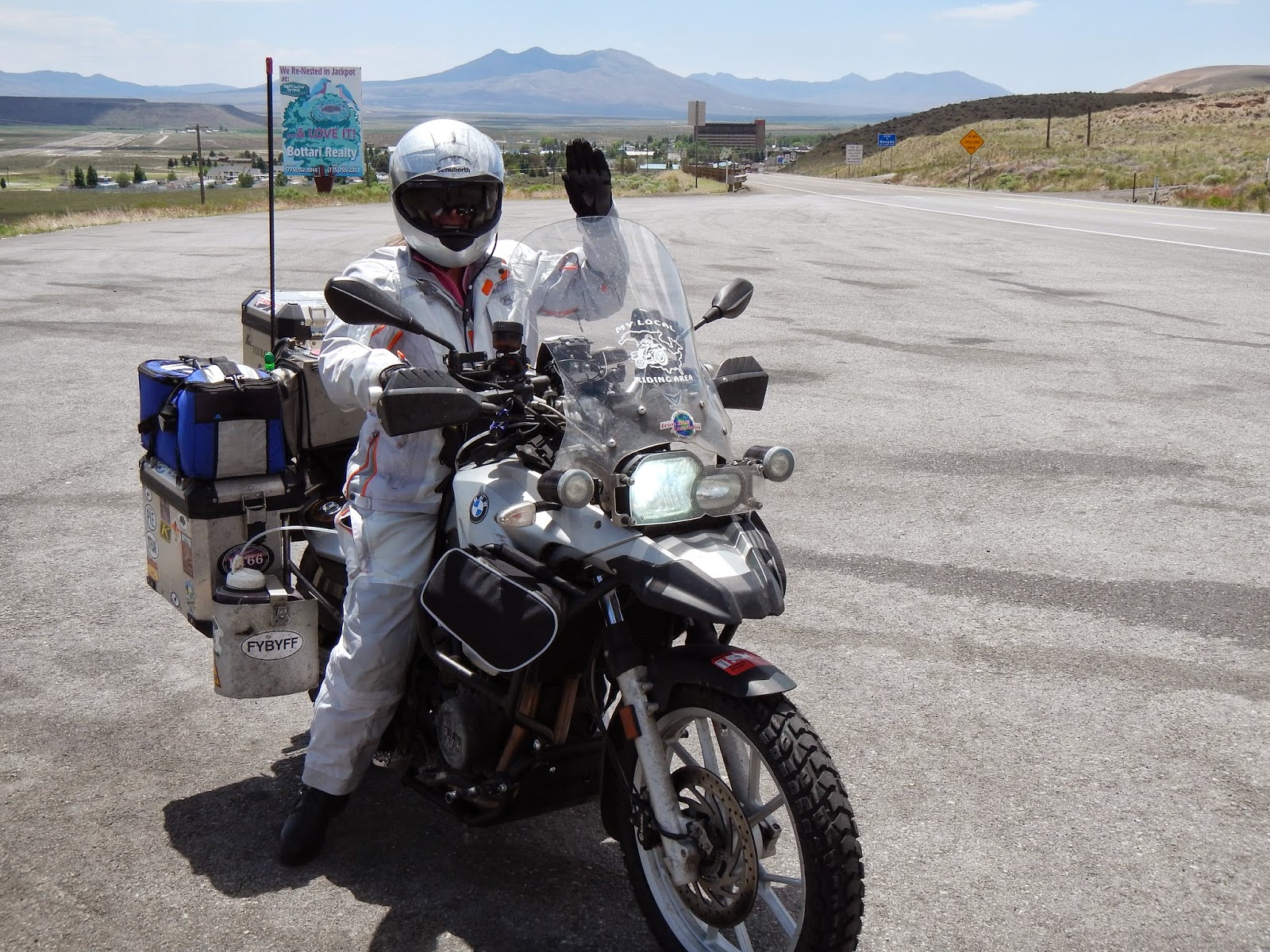 We motored on, still on Hiway 93, all the way to Twin Falls, ID.  Finally, we stopped for a gas and smoky treats break in Twin Falls.  It was HOT.  The temps were pushing 95 degrees. I had all my vents open and was fine as long as we were moving.  But stopped, oh my heck, HOT. (Such a Utah saying, "oh my heck" and I'm actually from Washington).

While at the gas stop, we had a nice visit with a fellow dressed for success complete with tie.  He wanted to know where we were from and where we were going.  This is a common theme for Long Distance Riders :-)  We told him and had a nice chat.  For all his professional looking get up, he is actually a rider with a Concours for street and a KLR for off road.  We had a nice visit while we stood in the shade cooling down.  I love to meet new folks on the road, especially those that understand the wanderlust and long distance riding desire.

From Twin Falls, ID we hopped on Interstate 84 heading west for a couple of hours.  Drone, drone, drone.  Well, but for the heat, it climbed up to 96 tops (our low today was 68 in Ely).  Man it got hot and then the wind begin to blow again in earnest from the side.  Yeah, you all know what that's about.  Fight the wind to keep your bike going in a straight line and wipe the sweat from your brow.  Nice.

We stopped in Mountain Home, ID where it was HOT and WINDY.  This is where Eric told me his CB lost power and his GPS could no longer talk to him.  Fun huh? 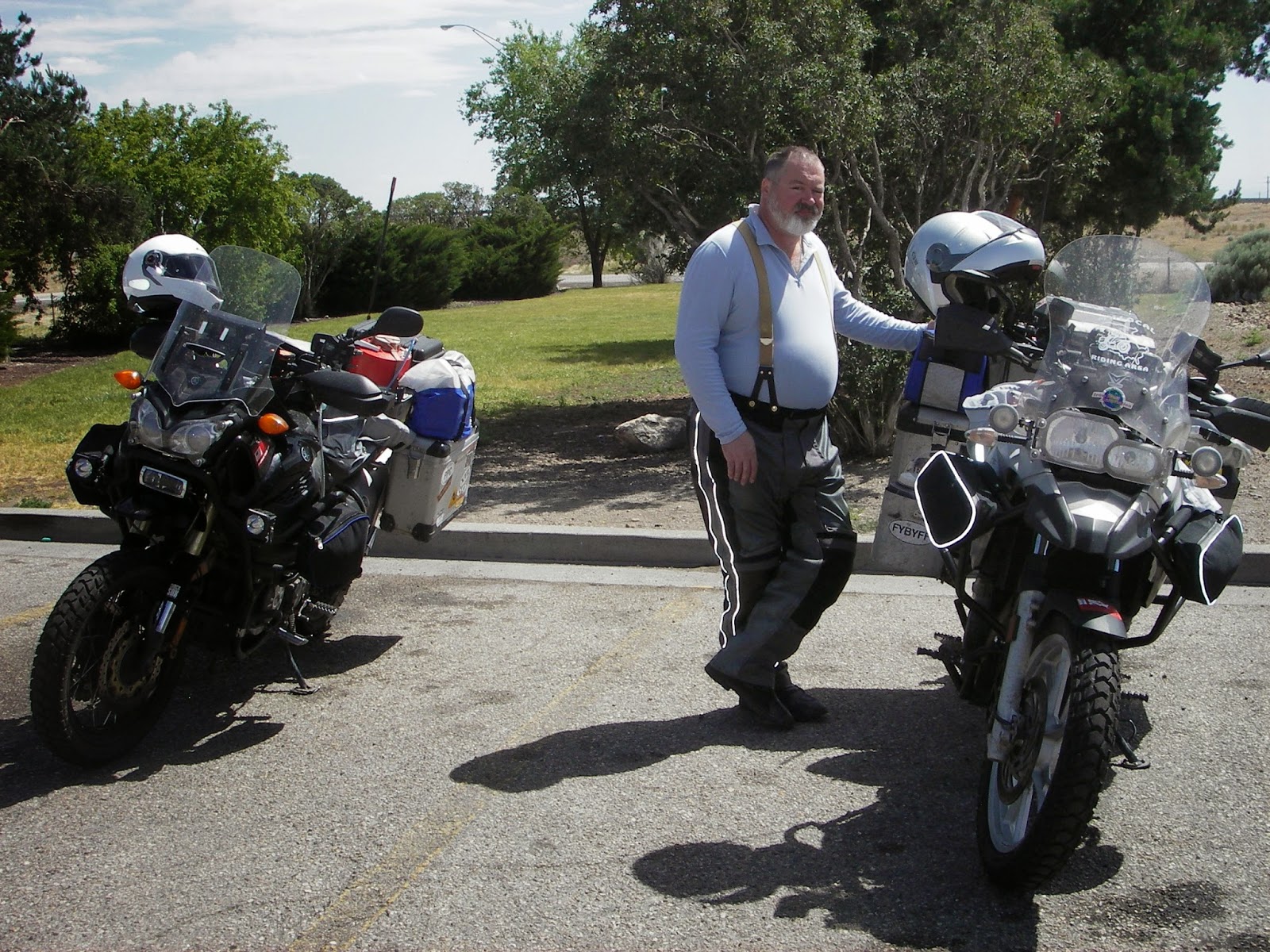 Oh well, we knew where we were going and it wasn't that much further.  Maybe another 100 miles or so.

My little, sweet F650GS HATES the heat.  Some of you might remember it overheating multiple times until the last time which was fatal resulting in a new engine.  I was thinking about this as the temperature climbed higher and higher and the wind blew stronger and stronger.  I kept a close eye on the outside temperature, the bike temperature and all the gauges on the bike.  I was kind of concerned, no, I was really concerned.  Here we are only two days into our adventure and I'm worried about the damn gas filler cap coming off and my bike overheating and dying.  Well, it keeps one engaged anyway!

So, nothing seemed to break or pop or die and I just kept motoring along.  We finally got here: 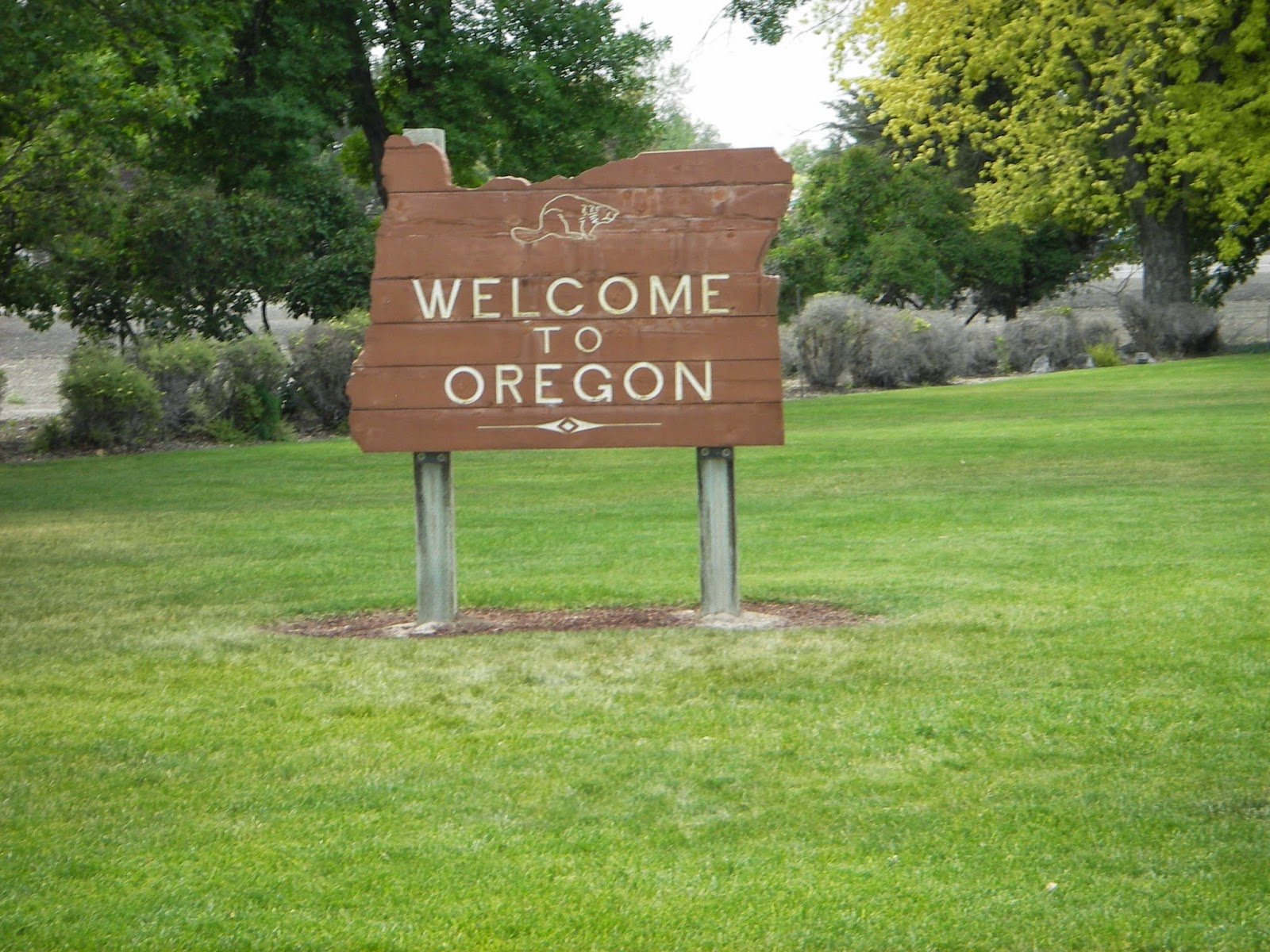 And waved goodbye to Idaho.  Only another mile or two to our destination. 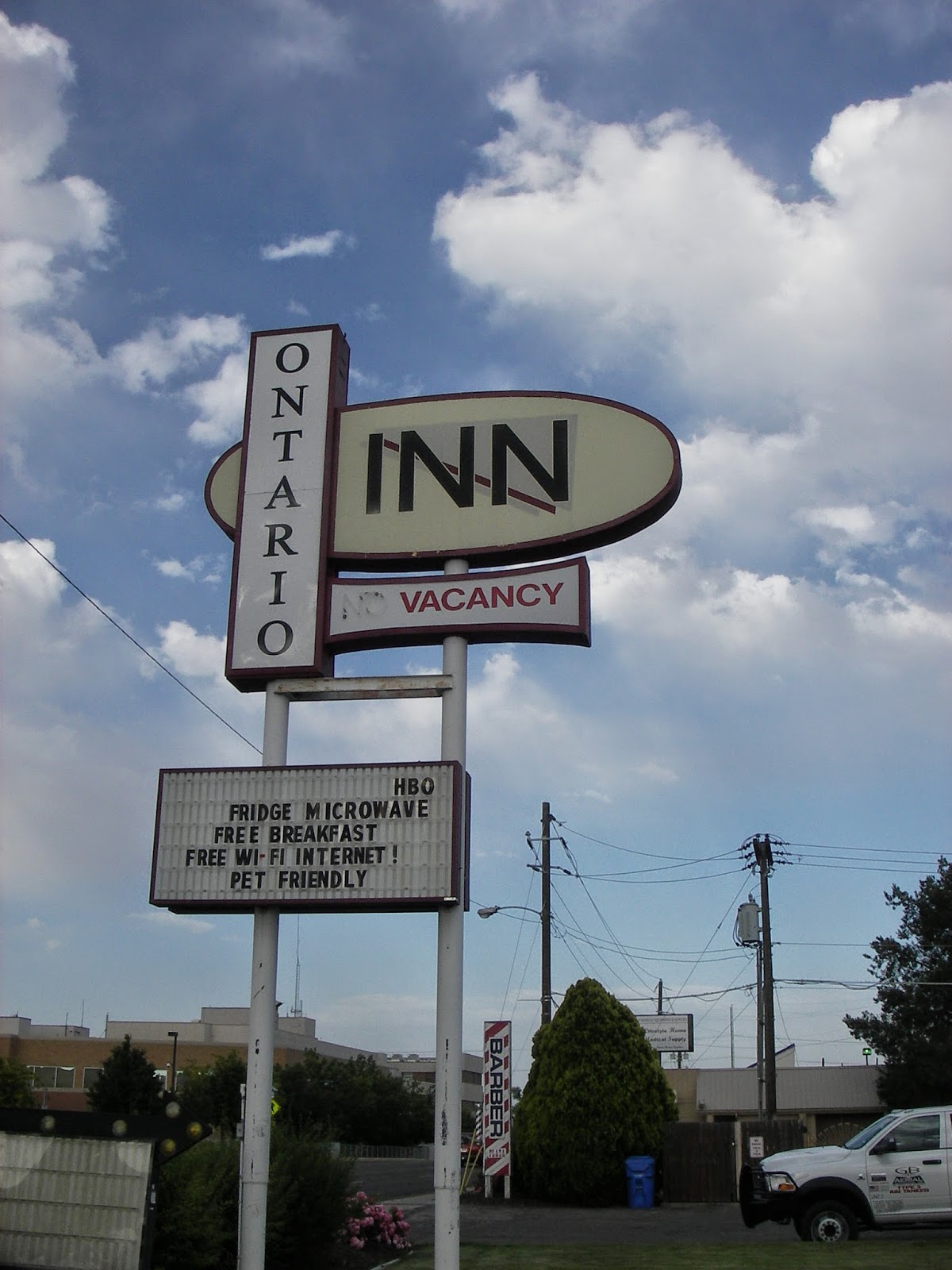 Ontario, Oregon.  We were headed to the Ontario Inn which Eric had checked out on Trip Advisor.  Great...I just followed him off the freeway and through town and on and on and on.  Hot, hot, hot.  We finally arrived and got checked in.  Yay!  We unloaded the bikes and Eric took off looking for a hardware store to get what he needed to fix my gas cap and his CB/electrical issue.

I, on the other hand, took a nice cold shower and put on clean clothes.  Then I made a cocktail and enjoyed myself (selfish bitch, aren't I?).  Eric returned with what he needed and very kindly took to fixing a tether for my gas cap (hey, I no longer had a spare and really didn't want to lose this one!).

Here is the result. 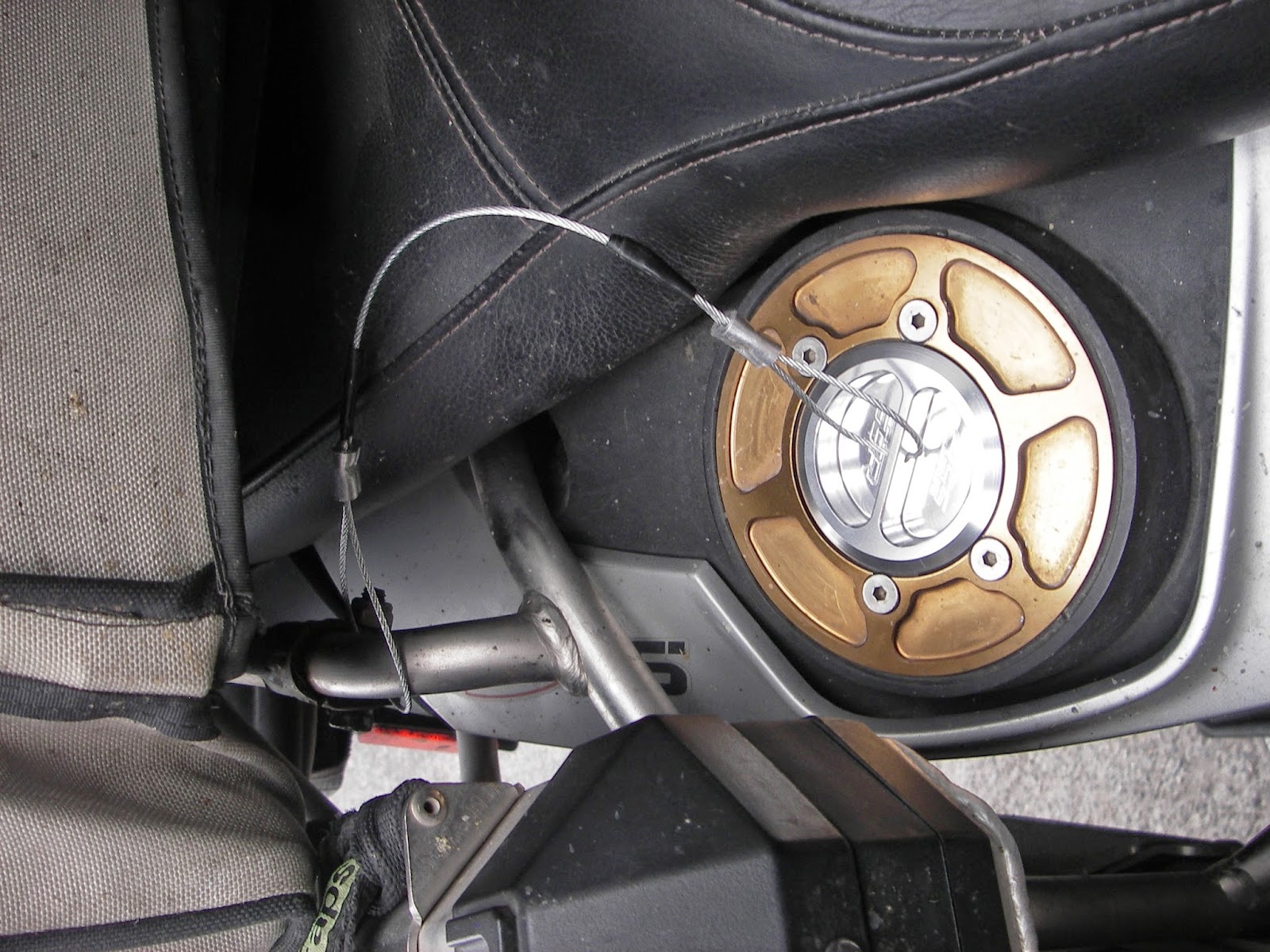 Thank you my most wonderful husband!!!   We'll probably order another spare to pick up somewhere in Alaska or the Yukon  But, for now, I'm tethered and don't think I'll lose it.  What a relief!

After repairing my bike, he moved on to his.  No I didn't take pictures, whose blog is this anyway?  Fortunately, he was able to locate the problem regarding the CB and make appropriate repairs.  Finally, he got his cold shower and cold cocktail and had a moment to relax. All tucked in for the night.  Notice that Eric parked under the awning and Cletha is parked in an open air space.  Hope it doesn't rain tonight :-)

We ordered pizza delivered to the room.  Neither of us wanted to go anywhere and that made life easy.

Tomorrow we're headed for another 425 miles or so to Omak, Washington.  Mostly small roads.  The weather forecast is for decent weather and not particularly hot.  Should be a great ride.

Take care my friends and I'll blog again tomorrow of our adventure!