Well heck, when we got to our destination in Smithers, we didn't have internet and I was not happy.  But, we went to Subway and grabbed a sammich and woohoo, internet service restored.  So, although I posted I couldn't blog today, I was wrong and I'm happy about that because it's so easy to forget what happened as days go by.

Not than anything particularly exceptional happened today.  It was just a day of riding.  But it was a fantastic day of riding indeed.

Stopping in Williams Lake last night, we stayed at the Drummond Lodge after checking into the various lodging arrangements in town.  Not a lot to choose from and I really like a motel with outside doors and parking in front of your room.  I hate those tall box hotels where you have to unpack and lug your stuff up three flights of stairs and down a long, dingy hallway.

We woke up at a reasonable hour because we'd gone to sleep early last night.  Remember how tired I said I was?  Well, early to bed took care of that ;-)  Even getting up early, we weren't particularly fast out the gate.  After a great shower, I got stuff all packed up and loaded on the bike while Eric took his shower and did his thing.  We then went to the lobby and had breakfast. Well, we did break fast but it wasn't much.  We had a small yogurt and made a PB&J toasted sammy.  No decaf so I did without coffee.

When we woke up, it was raining.  Yuk!!  Double Yuk!!  I don't really mind riding in the rain but I really hate starting the day in the rain.  It's okay if you're riding along and you get rain, but to wake up and know you'll be starting in rain, well just yuk.  So, I uncovered my bike and loaded the panniers and cooler and drybag in the rain. 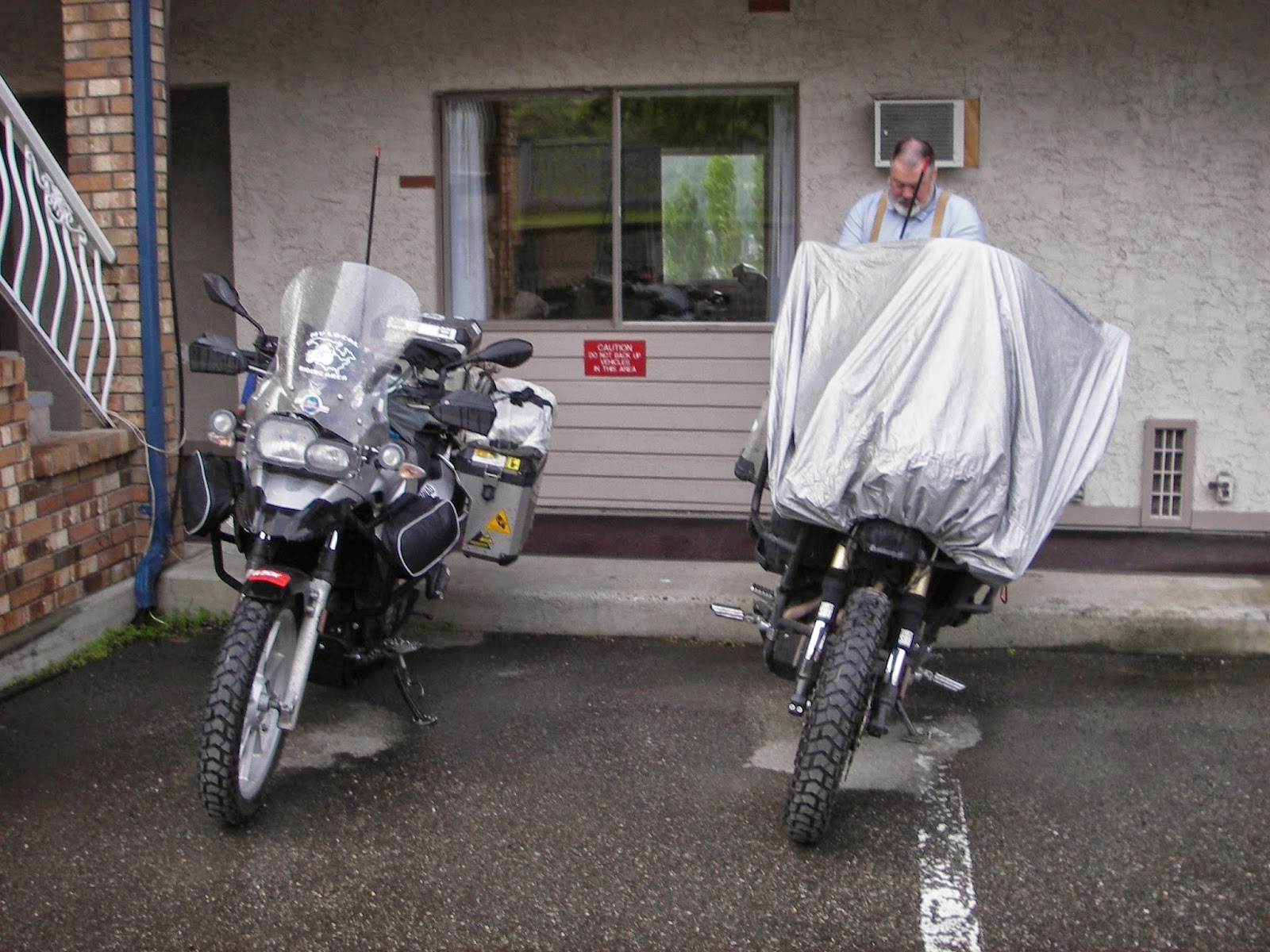 Alrighty then.  We finished brekkie and low and behold, the rain ceased!  That MUST be a good sign.  We hopped on the bikes and headed out of town after a quick gas stop.  Heading north on 97 until Prince George where we turned on to Hiway 16 or the Yellowhead Highway.  We made a quick stop in Prince George for gas and a potty break and then off again.

We stopped in Vanderhoof, BC for lunch.  We ate at an A&W which was okay.  I would NEVER eat at an A&W in the states.  Years ago it was decent but since they were purchased by Pepsi, well ick, ick, ick.  The A&W franchise in Canada is not owned by Pepsi and the burgers are actually quite good and tasty.  Well, that's what I thought anyway.  But, about a half hour after lunch I got the tummy ookies.  Not cookies, silly, ookies.  As in my tummy was not happy.  Gack.  No more fast food of any kind for me.  I'm seriously sworn of it (at least for a few days).

Back on the bikes, we headed toward Smithers.  During our ride we had off and on rain and off and on sun.  The sky was full of clouds and sometimes they were light and fluffy and we would get a ray or two of sun and other times the clouds were dark an ominous, threatening rain.  They didn't just threaten, we got rained on, we got hailed on, we got sleeted on.  Fortunately both of us had the foresight to dress appropriately.  The temperatures went from 40 degrees to 60 degrees.  It never got above 60.  I was so happy to have my LD Comfort gear on with my heated liner and the new waterproof Klim gear.  I stayed warm and dry.  And, for once, I was smart enough to start the day with the pinlock in place in my faceshield so no fogging up today.

We rode though incredible scenery and no, I didn't stop and take any pictures.  Bad me.  We rode though valleys of gold and green, mountains of blue and purple.  Vistas that would take your breath away.  The rivers and lakes were everywhere.  Really, everywhere.  I was amazed that at every turn of the road there was a river, lake, pond or expansive meadow to view.  I was also amazed at how many people live out here, so far from anything.  Its not like a housing development or subdivision - but in between the trees there are homes and lots of them, cleverly hidden among the flora and forest.  They are tougher folks than I :-)

We did make a rest stop somewhere before Smithers :-) and I took a few pics. 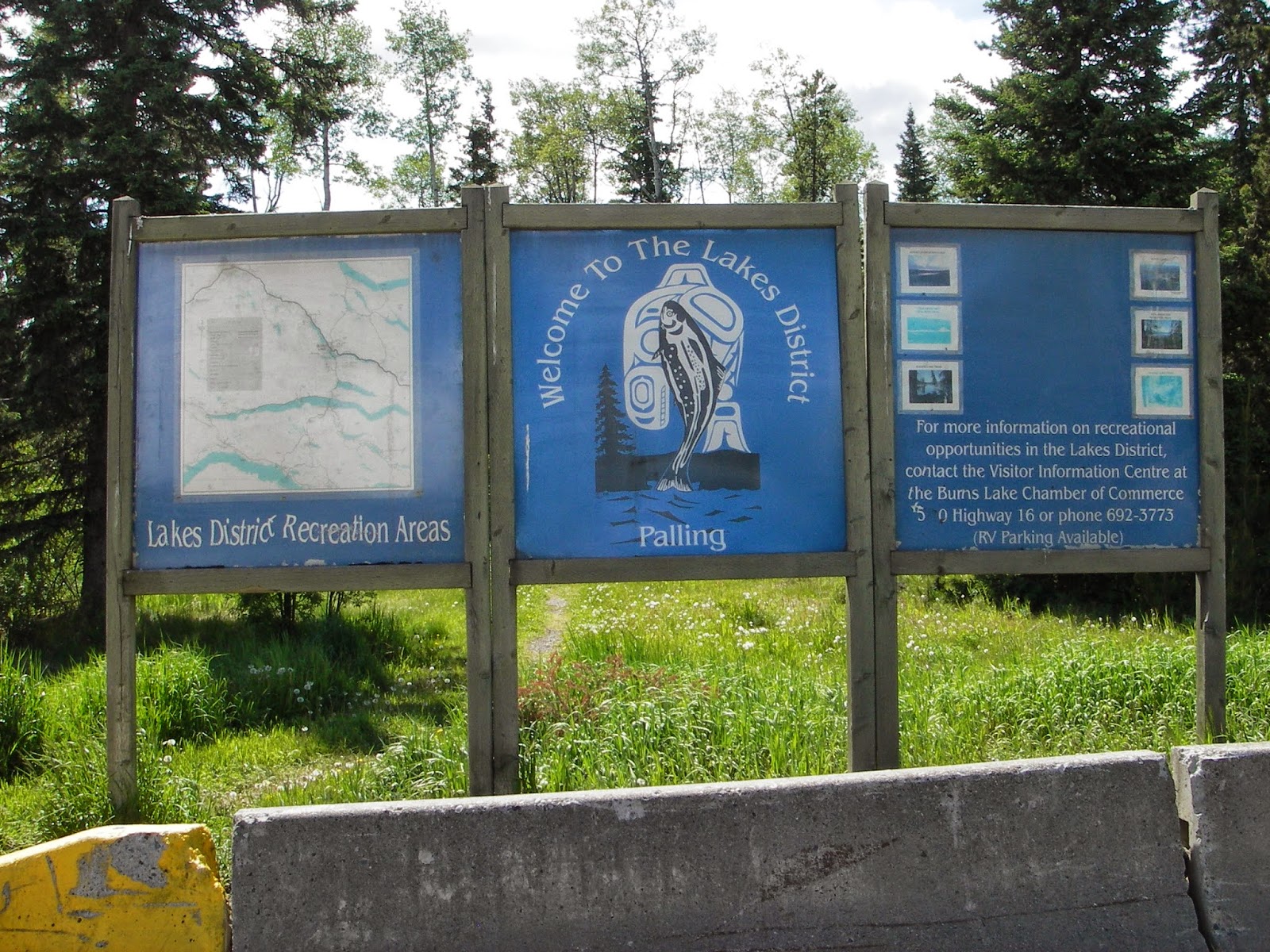 We saw lots of forest. 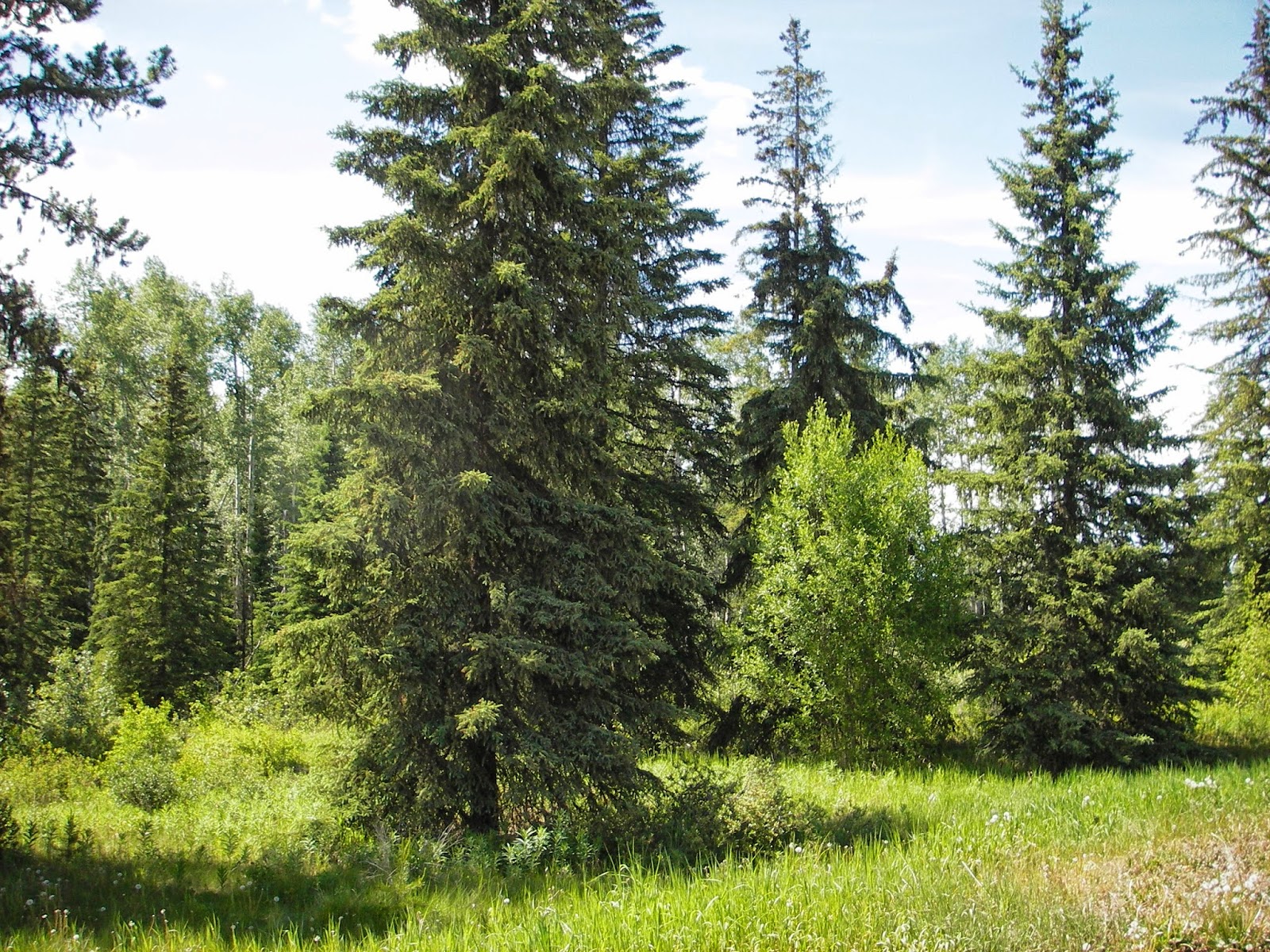 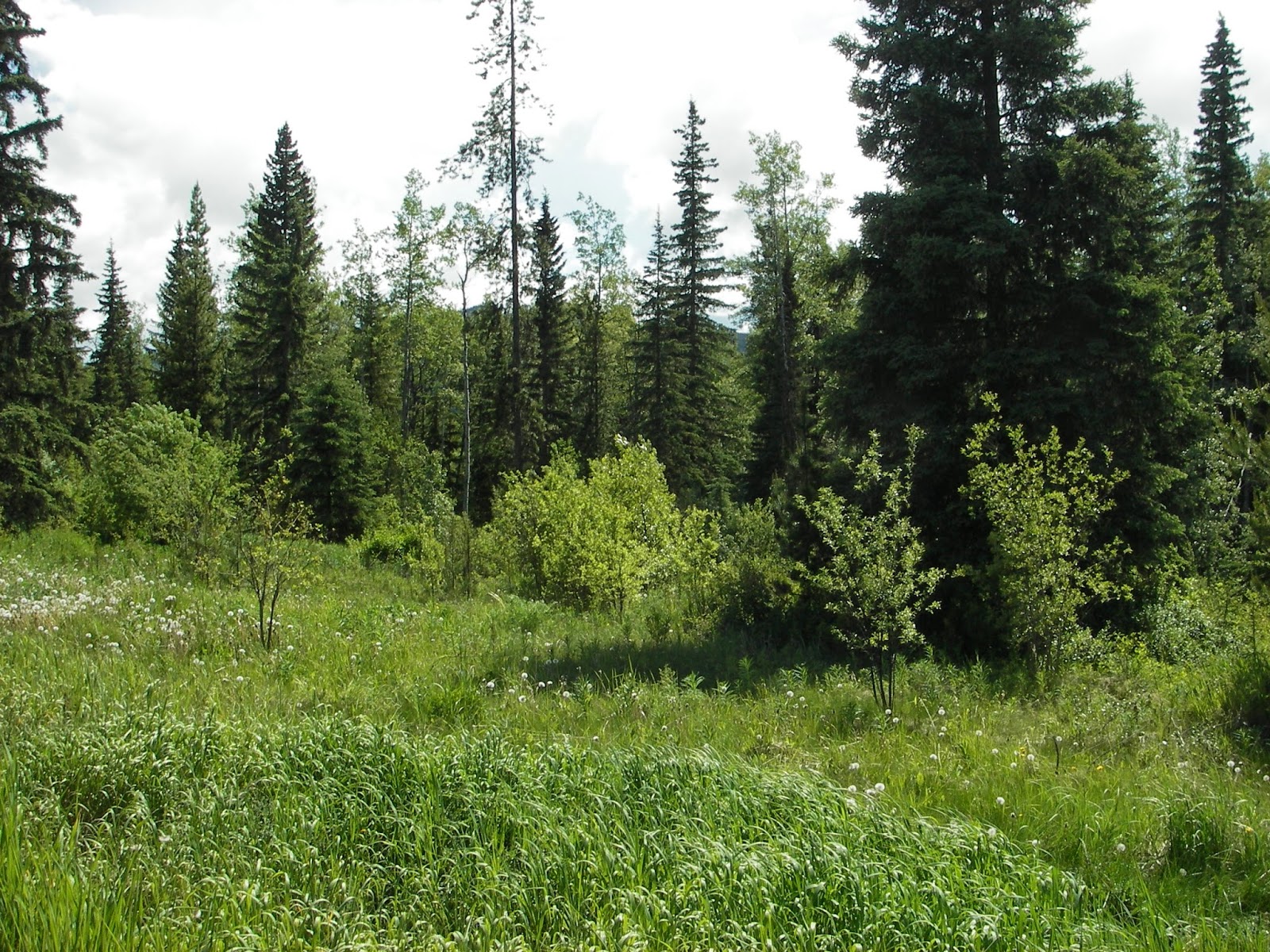 And not too many bikes.  A few but we felt we were the only bikes headed west on Hiway 16. Here's another picture of my honey! 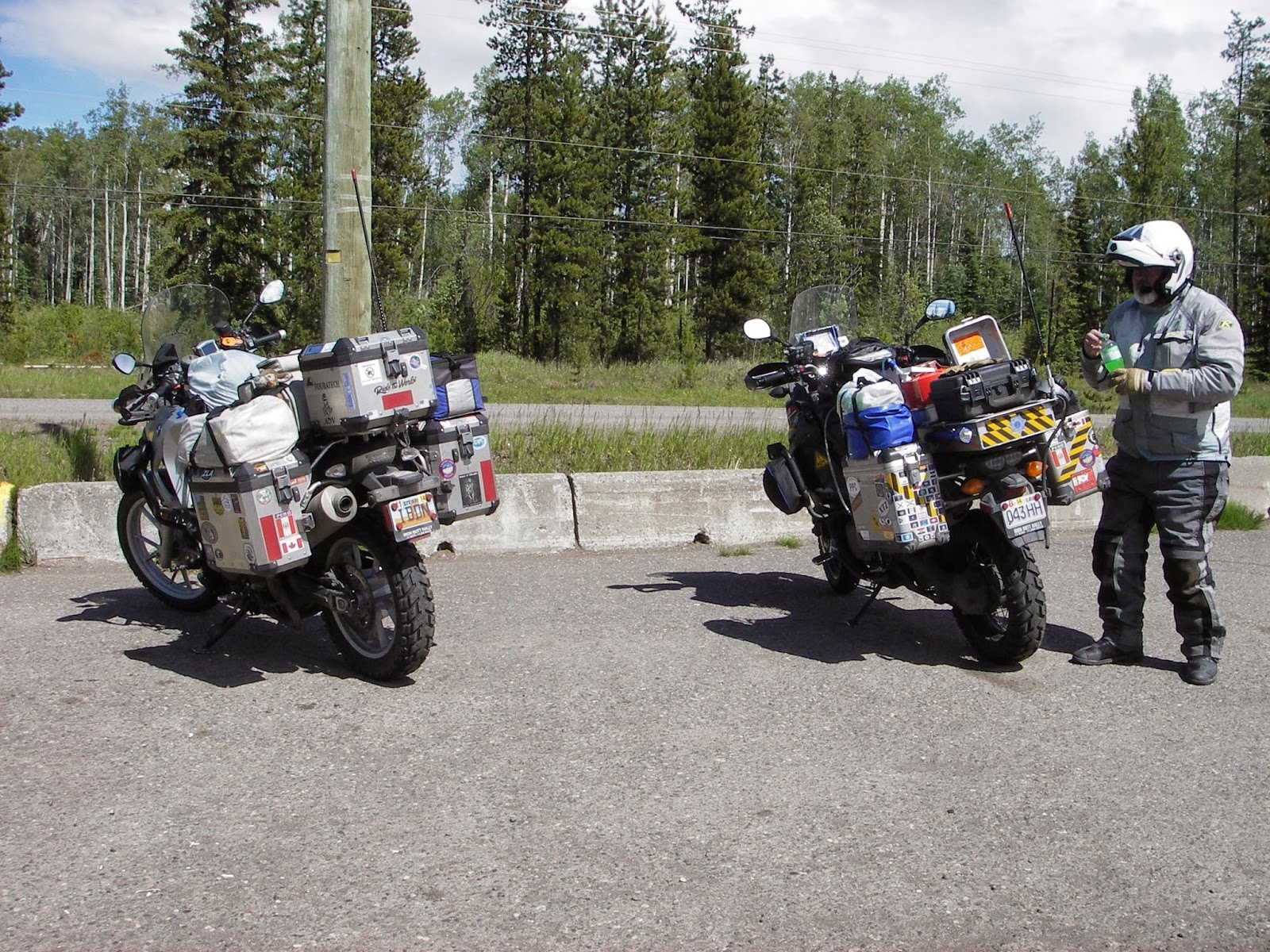 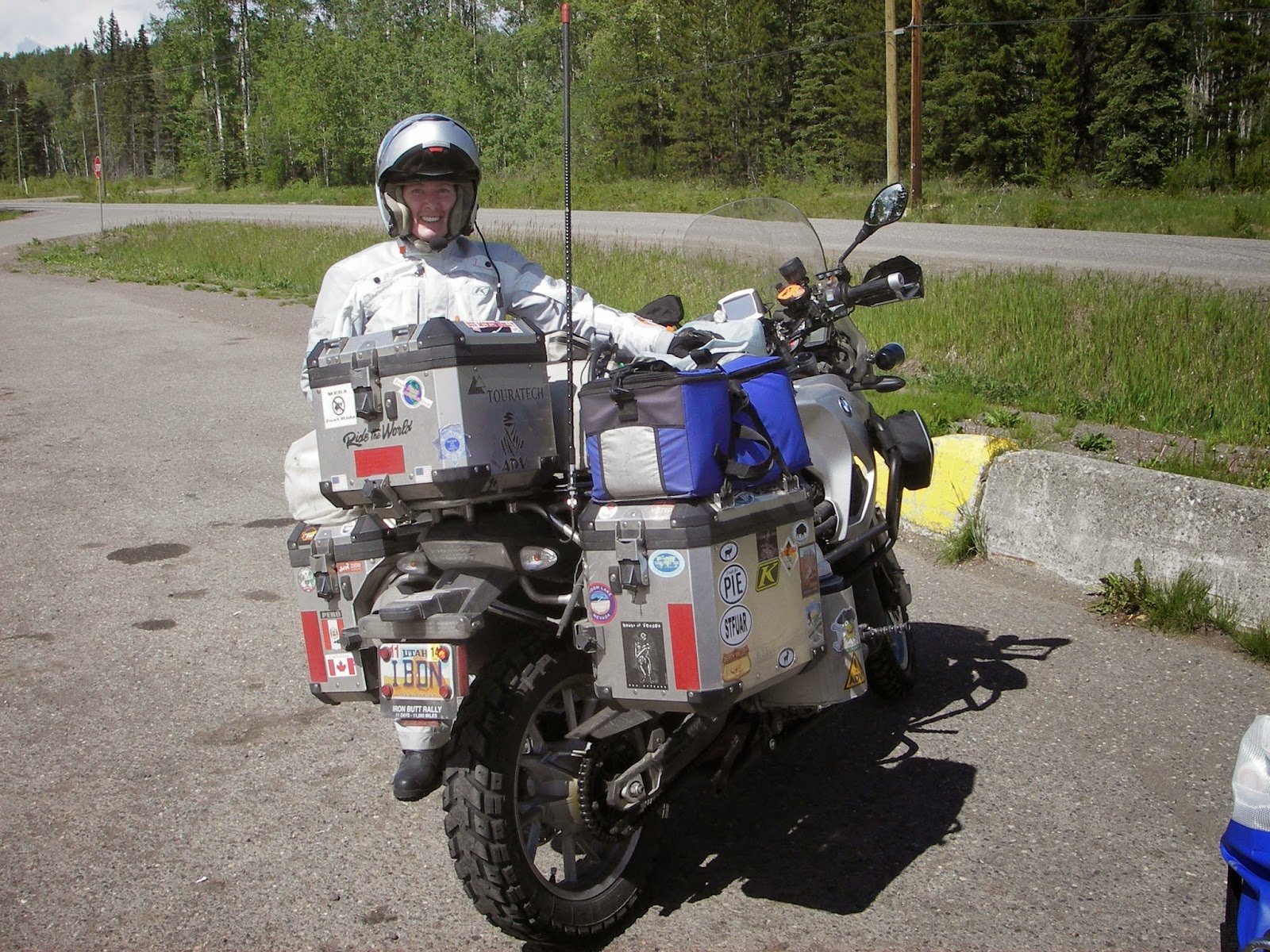 At this point we were only maybe 30 - 40 miles from Smithers and we both really wanted to be at our destination.  As I said before, the sky was either this - 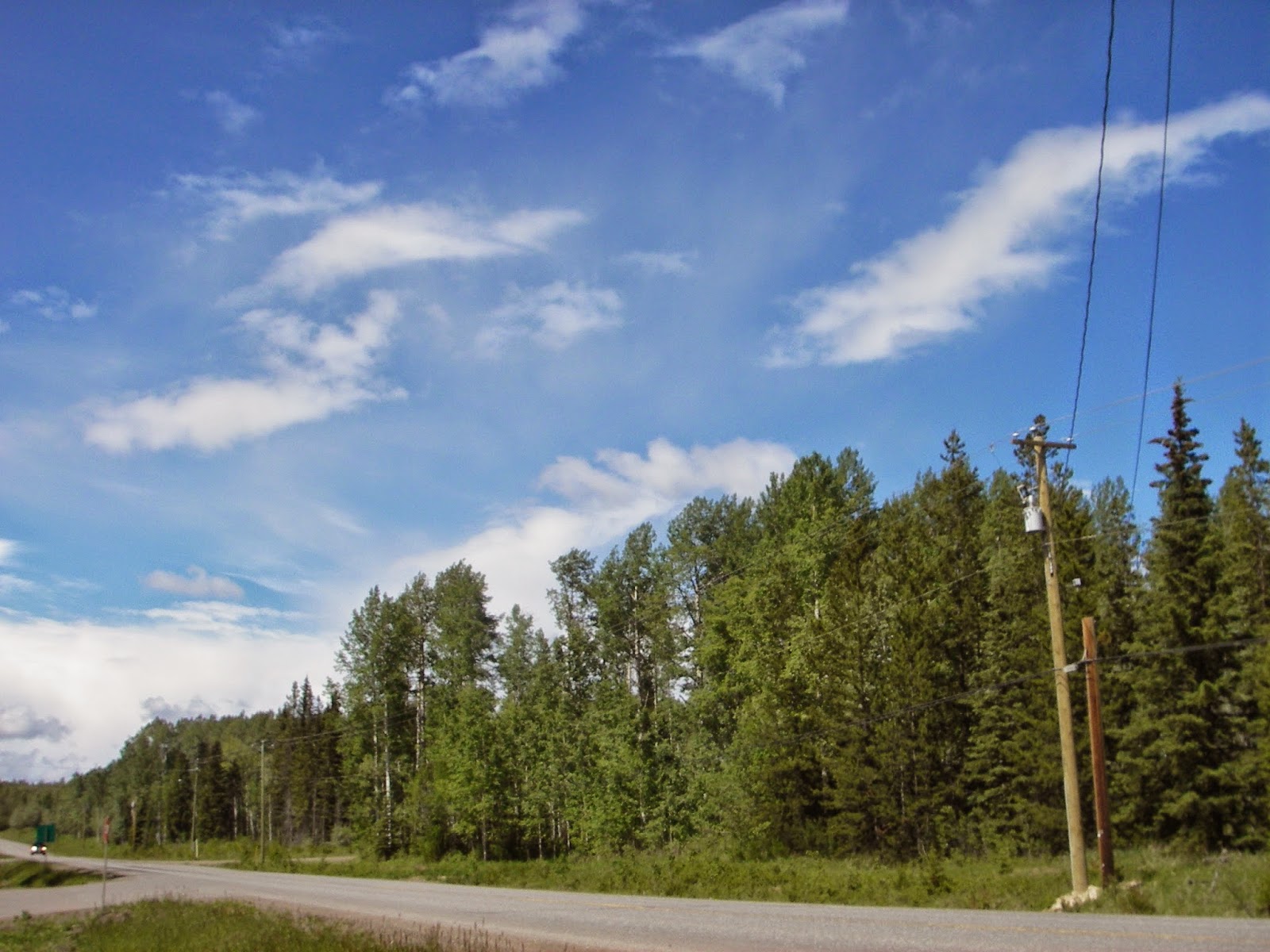 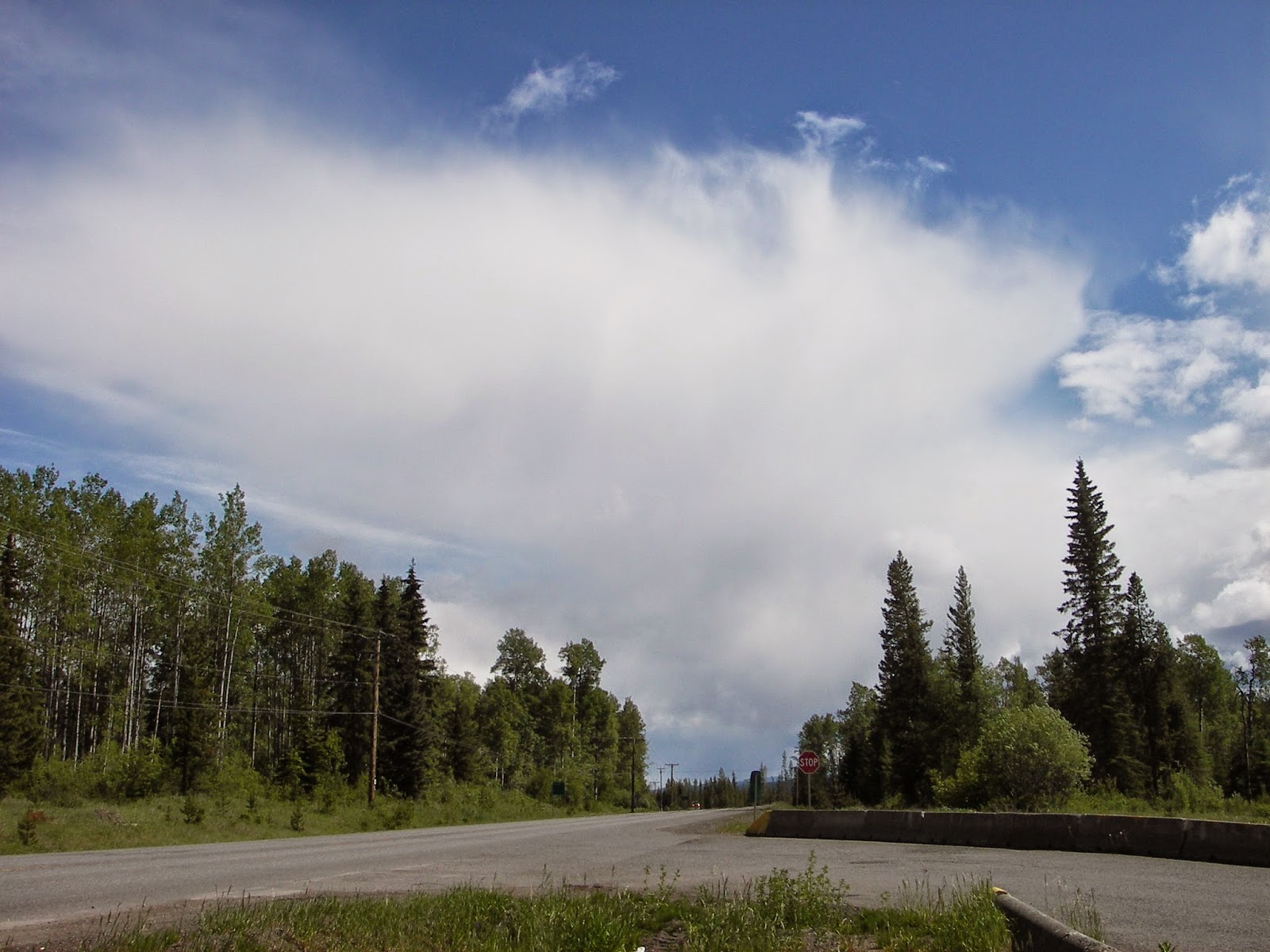 well, actually much darker.  We would be riding along and see big black clouds only to take a turn in the highway and miss most of the weather, catching only the fringe of rain.  I think we were pretty lucky with that today.

We arrived in Smithers in late afternoon and checked into the Fireweed Motel.  This is a very nice place and our room is delightful.  I'm pretty sure we'll get a good night sleep here.  Well, there are a bunch of hooligan young folks here for the night.  They are working the summer for the Canadian Forestry Dept. planting trees and today was a day off.  They all made a beeline to Smither's to cut loose.  Hahahaha....no cutting loose here.  McDonald's is the biggest thing happening.  It was kind of fun to meet them.  One young man was in t-shirt and tights with a tutu..............hmmmmm......

I spoke with several of the young folks and they are fun but just a different generation than I.  Anyway, they were getting quite loud and having fun and I was concerned that might last all night.  But, fortunately, they have quieted down and I think Eric and I will get a good night's sleep. 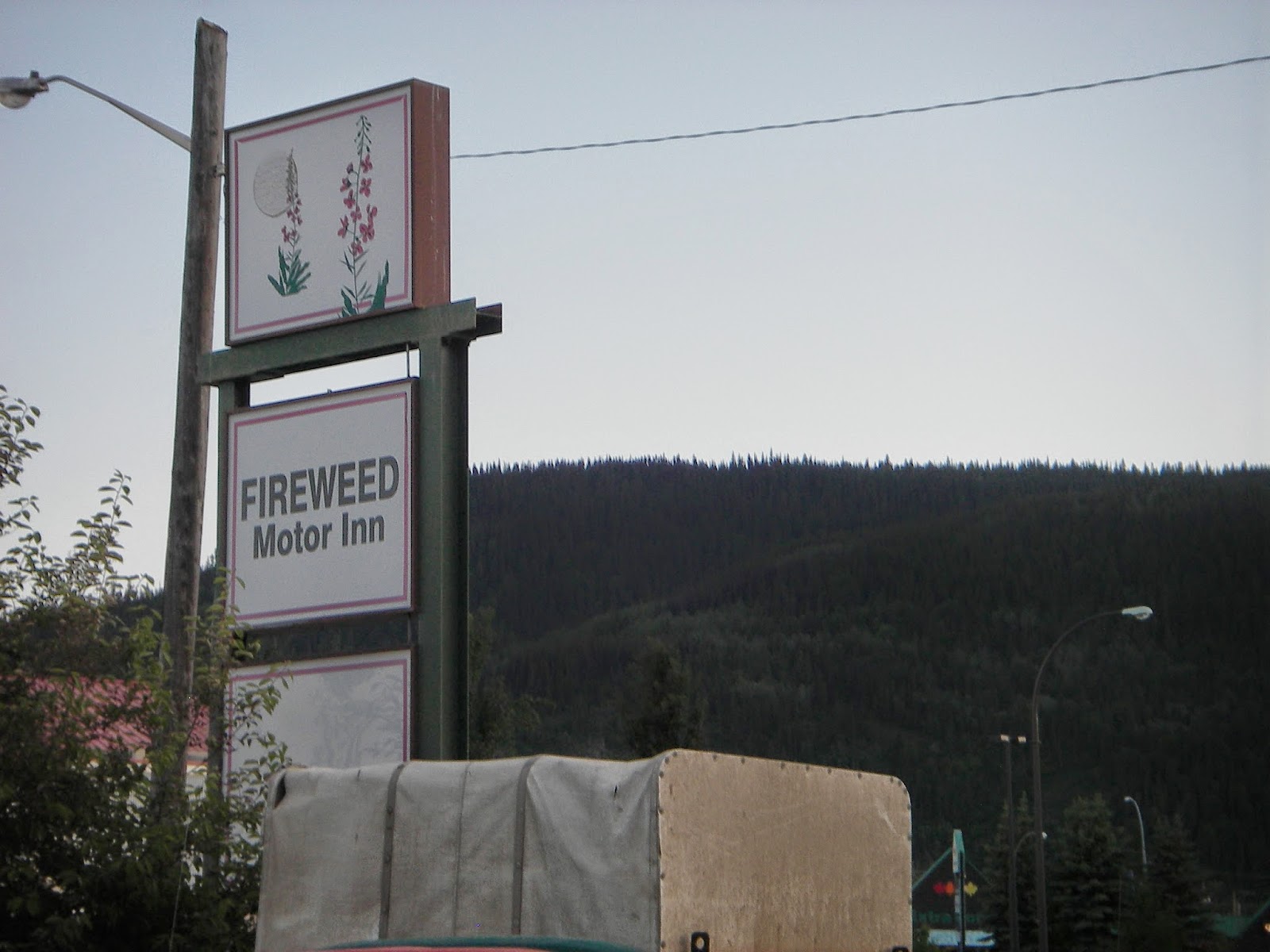 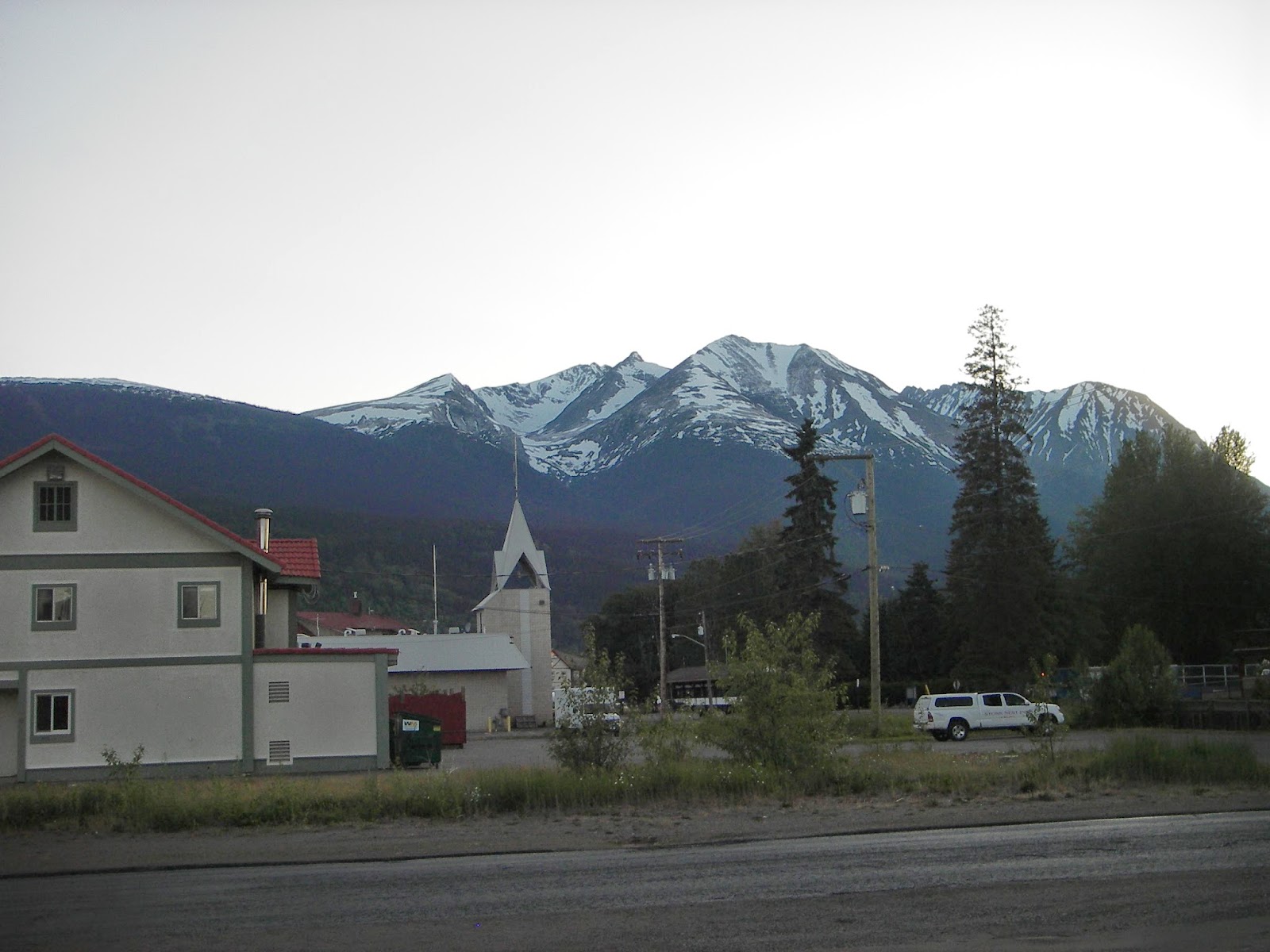 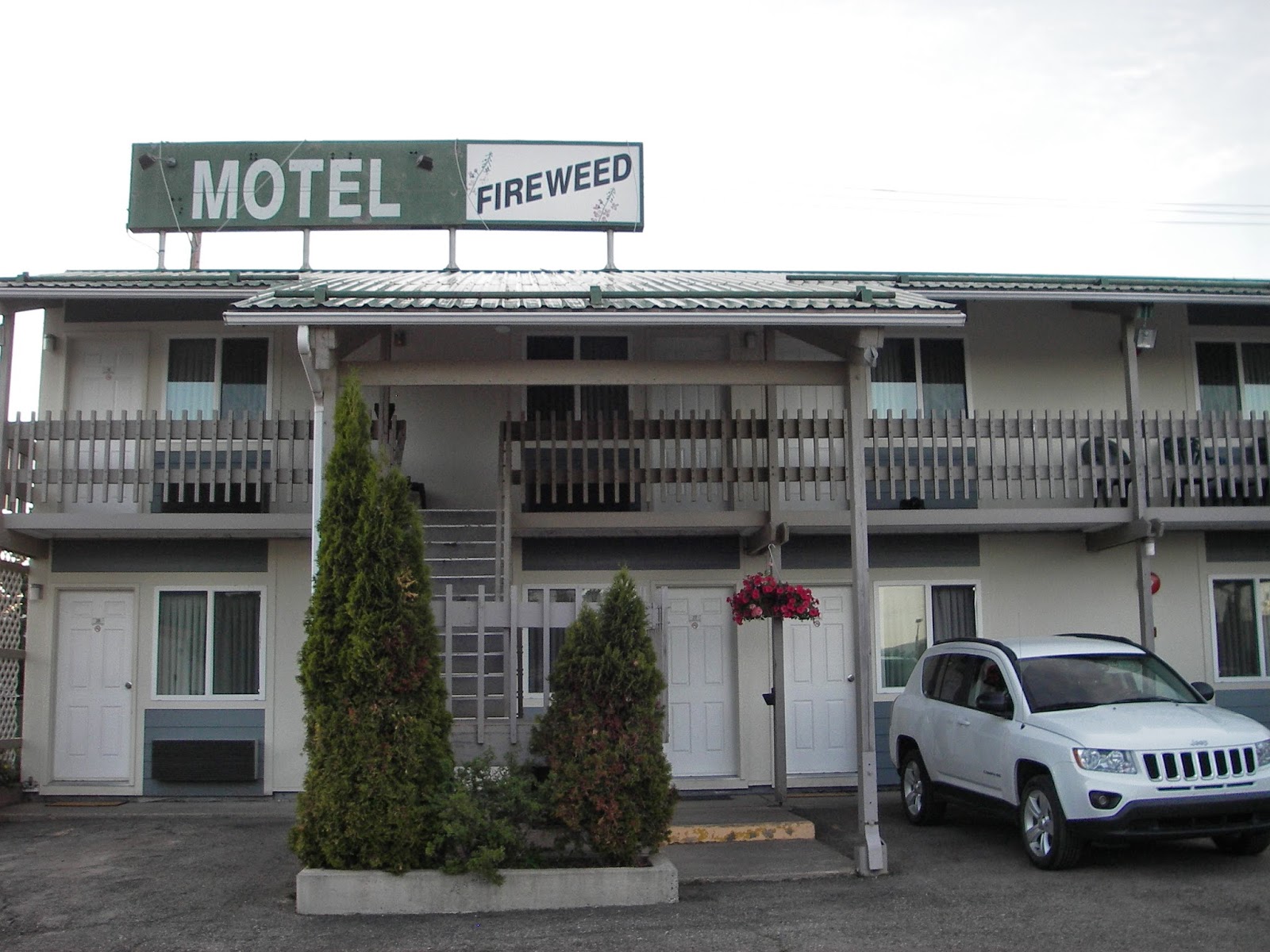 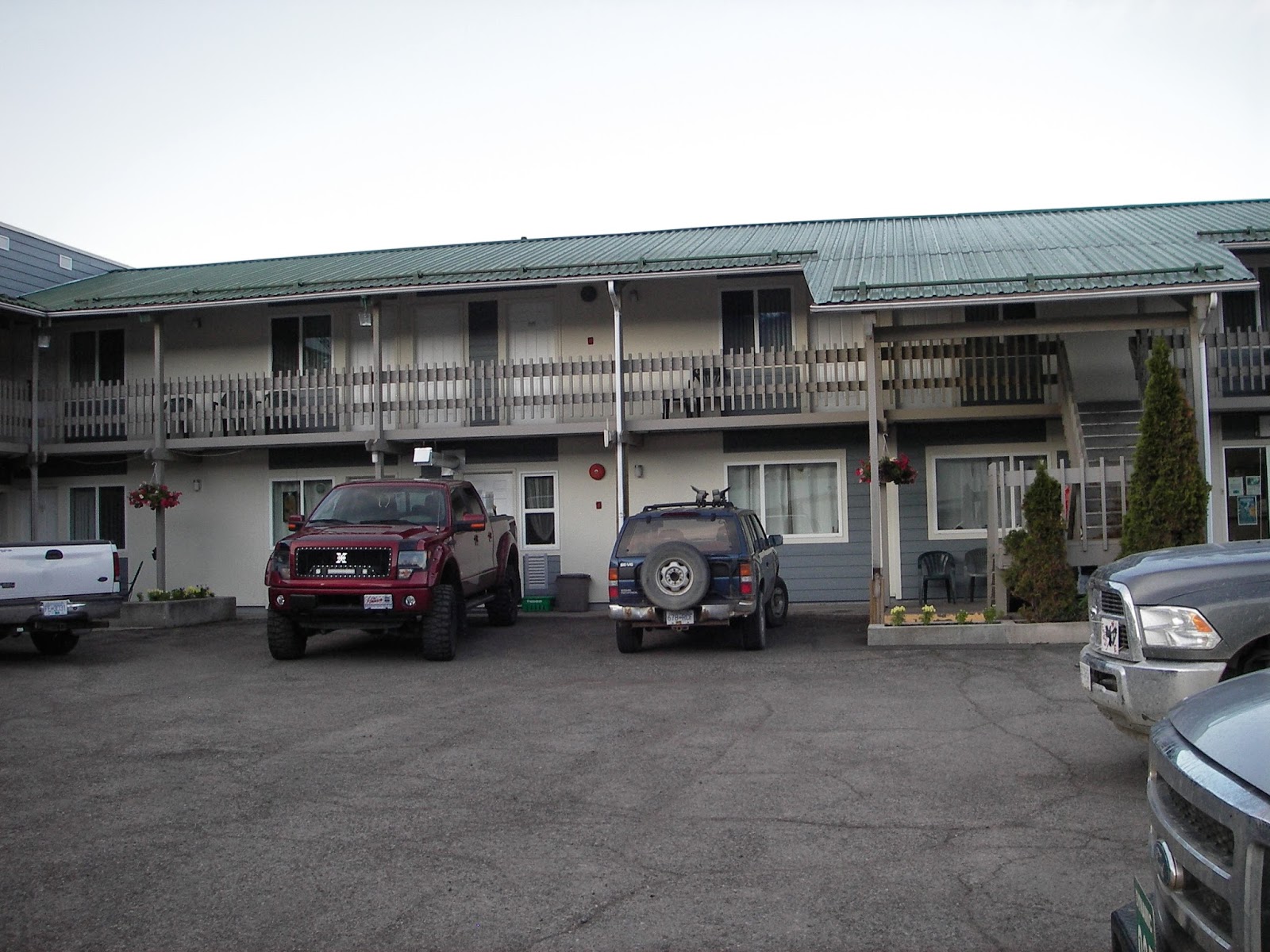 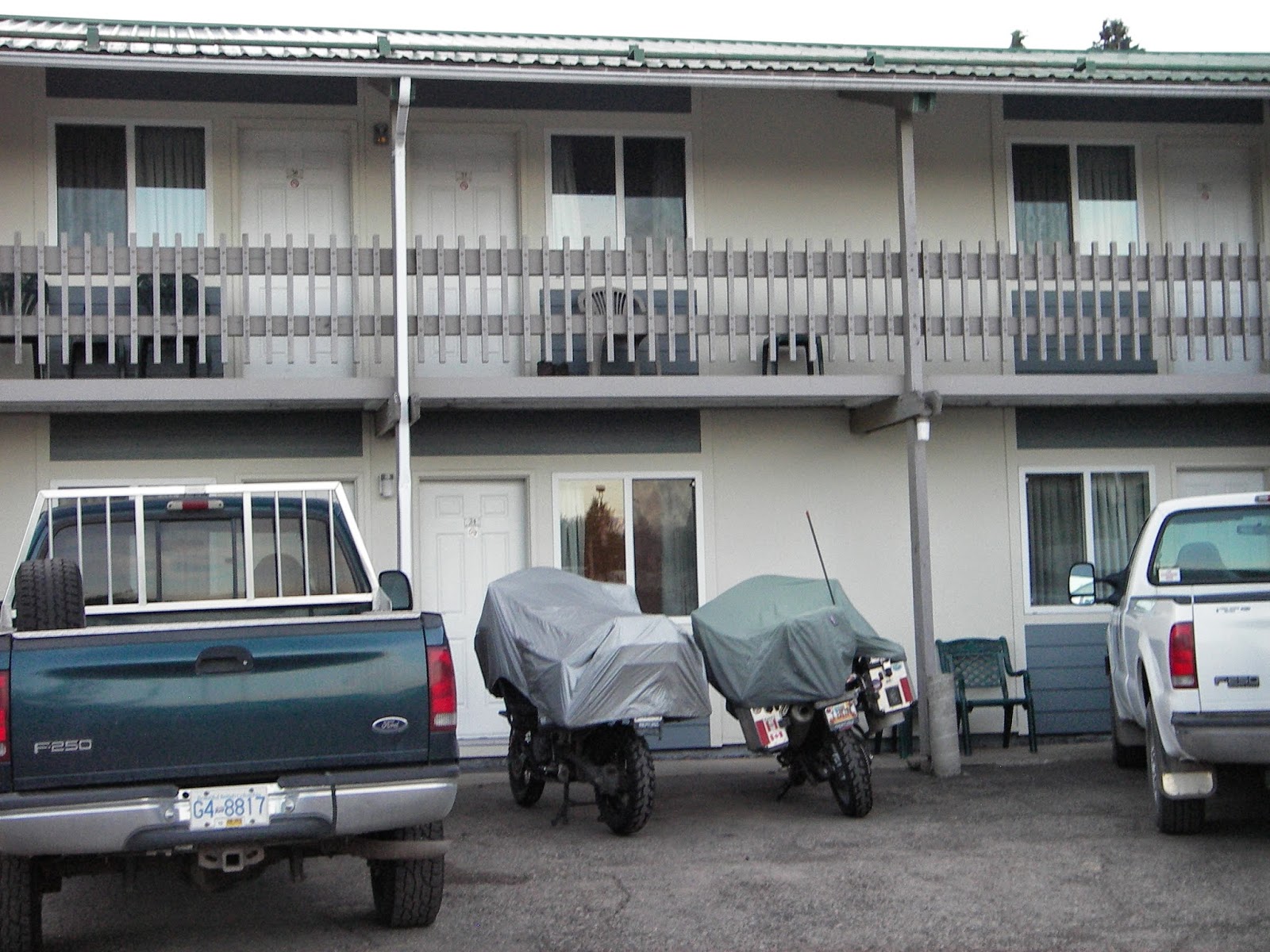 So, not such an exciting day but a pleasant one even with the weather.  I stayed warm and dry and my bike performed well.  Hahahaha, for those of you in the know, yes, we've been lubing the chain every day and fingers crossed, it all seems fine :-)

Tomorrow we're going to Hyder, AK.  A special place for us because that is where we first met each other in person.  We're looking forward to a meal at the Bus and some fine fudge from Caroline.  I'm also excited to look up Johanna and see if she remembers me.  So many fond memories from Hyder and Stewart.

Almost forgot.  This evening as we were looking for a place to eat we spied three motorcycles parked on the street with Iron Butt plate backers.  Me, being who I am, went into the pub where the bikes were parked and looked for some likely suspects.  Aha! Spied them immediately.  We were tickled to meet two guys from Missouri and one from Arkansas, two of which were going to Dust to Dawson.  Hahahaha, the folks you meet on the road just add to the fun and joy!

Thanks to all of you folks reading my blog.  I hope you enjoy it and I hope this will be something I go back to in future years to remind me of what all happened.  It might not be the most exciting post you've ever read, but it is our journey and we're having a great time!  I'm tickled the internet decided to work with me!

Cheers and tomorrow will be another fun filled, seat of the pants exciting kind of day, I'm sure of it!