We managed to get up, dressed, bikes loaded and out the door before 8:00 am.  It was only about 56 degrees so I put my heated liner on under my jacket and zipped all my vents.  We left in good weather and headed west again on I-84.  Very light traffic and we moved along quite nicely.  I suppose we rode for at least an hour and the temperature began to drop.  Before long it was about 53 and I was getting chilled.  I was pretty sure Eric was getting cold because he hadn't zipped up his vents.  We pulled into a rest stop just west of Baker City, OR to revise our riding gear to something more appropriate for the chill and the impending clouds looming ahead of us.

Here is our stop. 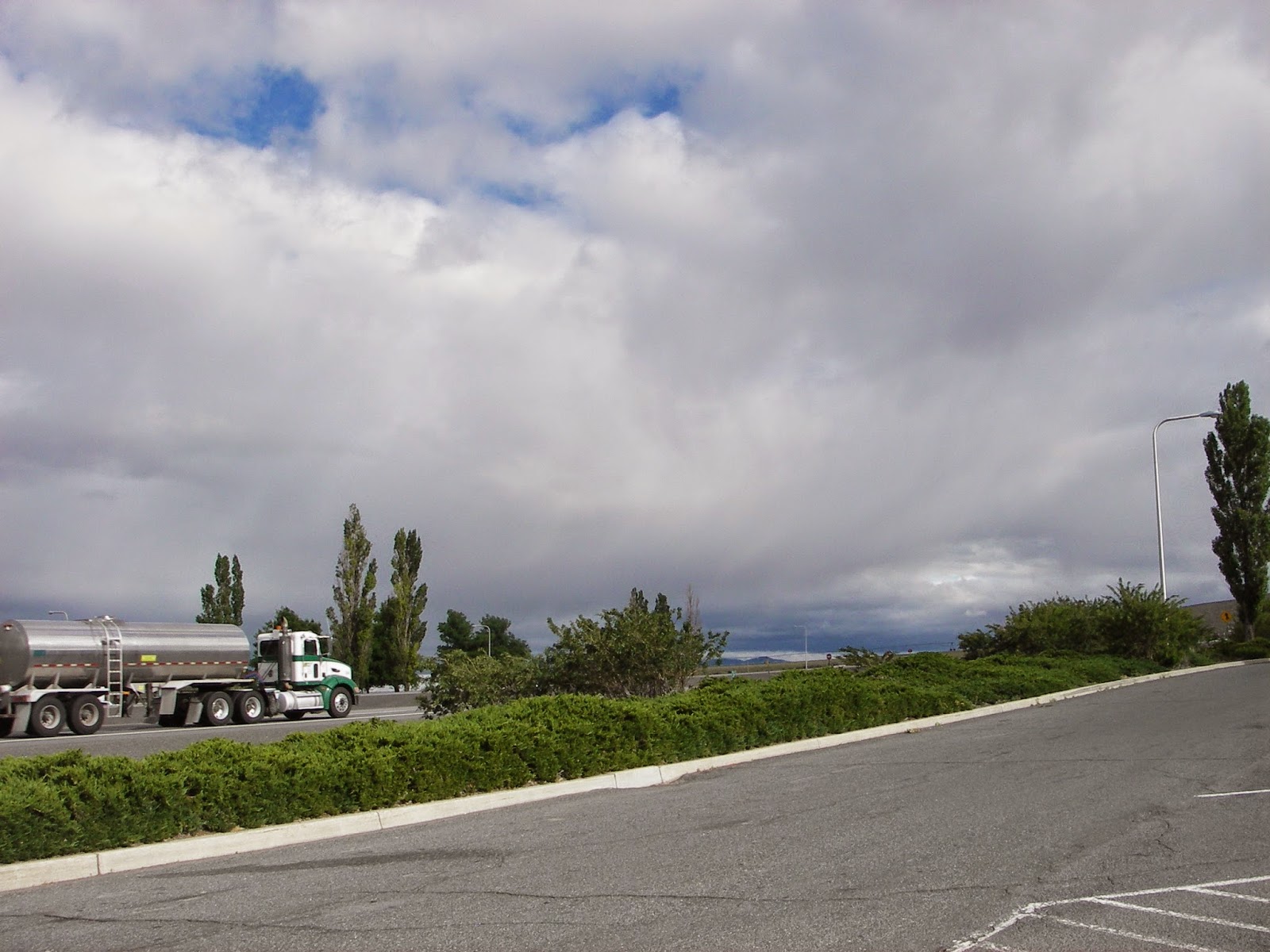 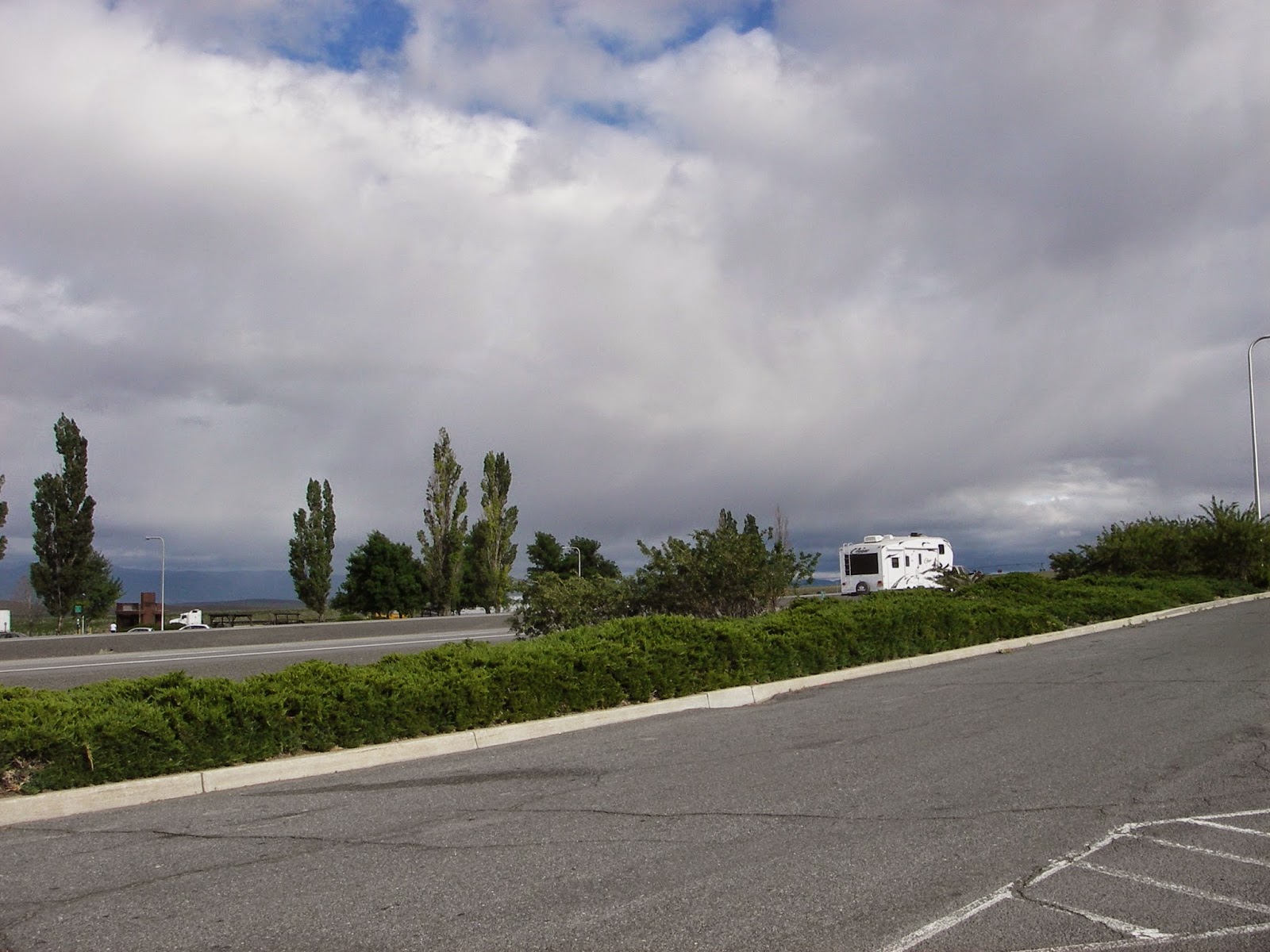 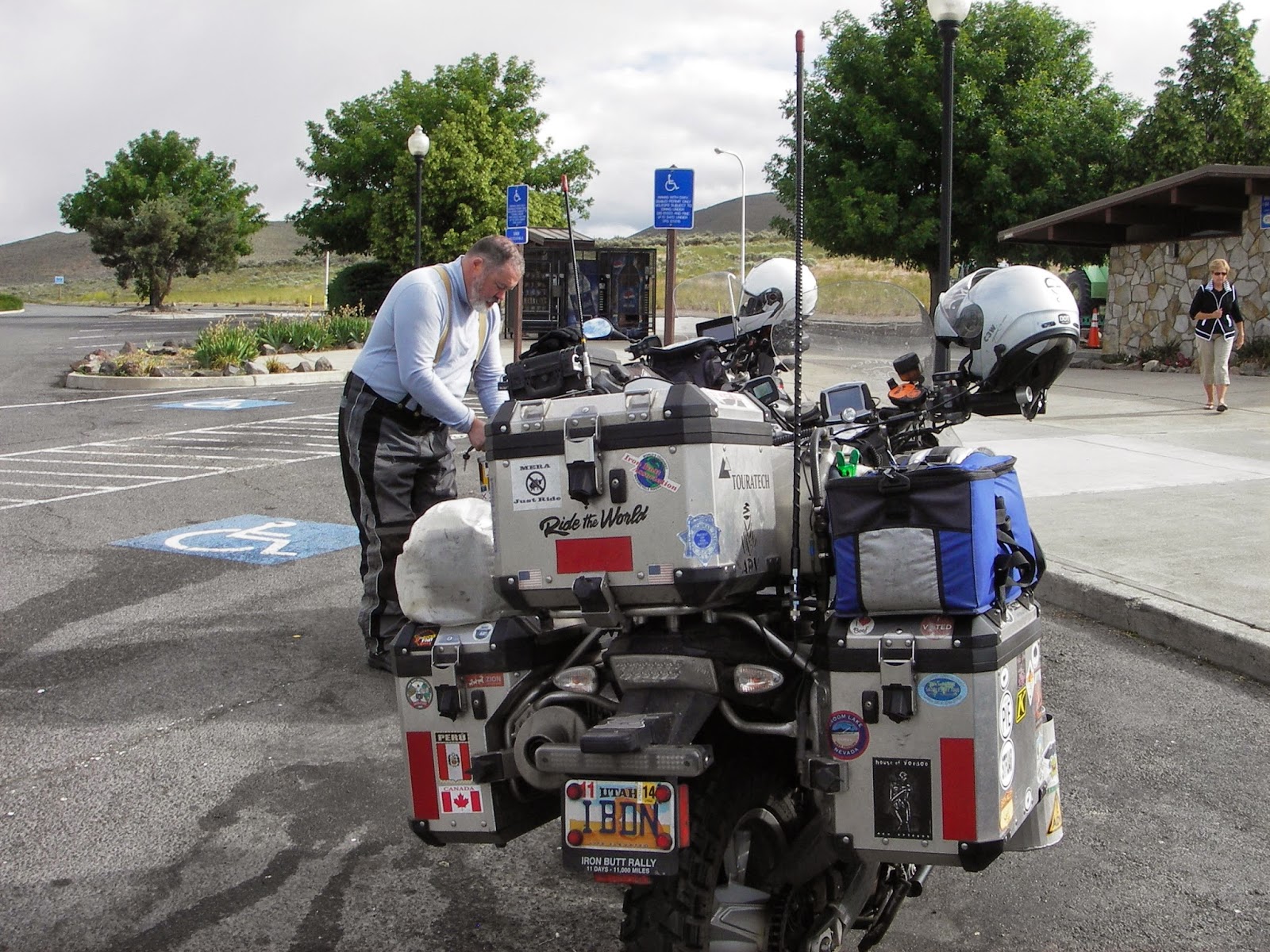 You can see the ominous clouds building up.  Shortly after leaving the rest stop, it began to rain.  Well, really sprinkle.  I was glad I had put on my waterproof gloves and plugged in my heated jacket.  I cranked the heat and was toasty warm and flipped on the heated hand grips.  I figured this would be as bad as it got.  Ha, I was WRONG :-)

As we hit the Blue Mountains, the weather turned mean and ugly.  It started to rain with purpose and the temperatures plummeted.  The lowest I saw was 40 degrees.  I just kept cranking up the heated jacket.  I hadn't, however, installed my pinlock faceshield and I was fogging up something fierce.  I was forced to pop open the faceshield to clear the fog.  Needless to say, my face got soaked as well as the inside of my helmet.  It was really raining hard and there was quite a bit of traffic.  Especially semi-trucks.  It was an interesting challenge to pass a semi-truck with a wall of water spray coming off the back and sides.  I would creep up beside the semi and then quickly close my faceshield and go like he** to get past and then re-open the shield again to de-fog.  I made this exercise more times than I could count.  It got really exciting when there was another car passing the semi and they wouldn't get up and go but just plug along oblivious that I needed to get by quickly.

What a change from yesterday where my biggest bitch was the heat!  Hahaha, you never know, day by day when riding across the country just what you might encounter.  Too bad it was all clouds and rain through the Blue Mountains because it is a very beautiful area.  I've been through there many times in a cage but this was my first time on a motobike.  I still enjoyed it, challenges and all.  The flora is wonderful with lots of green grass, tall evergreen trees and a whole lot of nature.  Funny observation, I didn't think once about animals (deer, etc.) while riding through the Blues.  I was totally focused on being safe, passing carefully, maintaining good distance, keeping my speed and generally riding in a good, safe manner.  It took all of my attention.  I suppose Bambi was lying low anyway because of the weather.

When we came down from the Blue Mountains we encountered yet another challenge.  EPIC WIND!!!!  Oh heck yes.  The kind of wind that makes you tense and tight because you never know when a gust is going to try and blow you off the road.  The kind of wind that keeps you leaning to the left at a severe angle.  Geez!  Enough Mother Nature :-)

We made another rest stop just east of Hermiston, OR.  We had been following the Oregon Trail but didn't really take the time and stops to document it.  Again, this is something I've done in the cage in the past.  It's awesome and the history is fun to read. 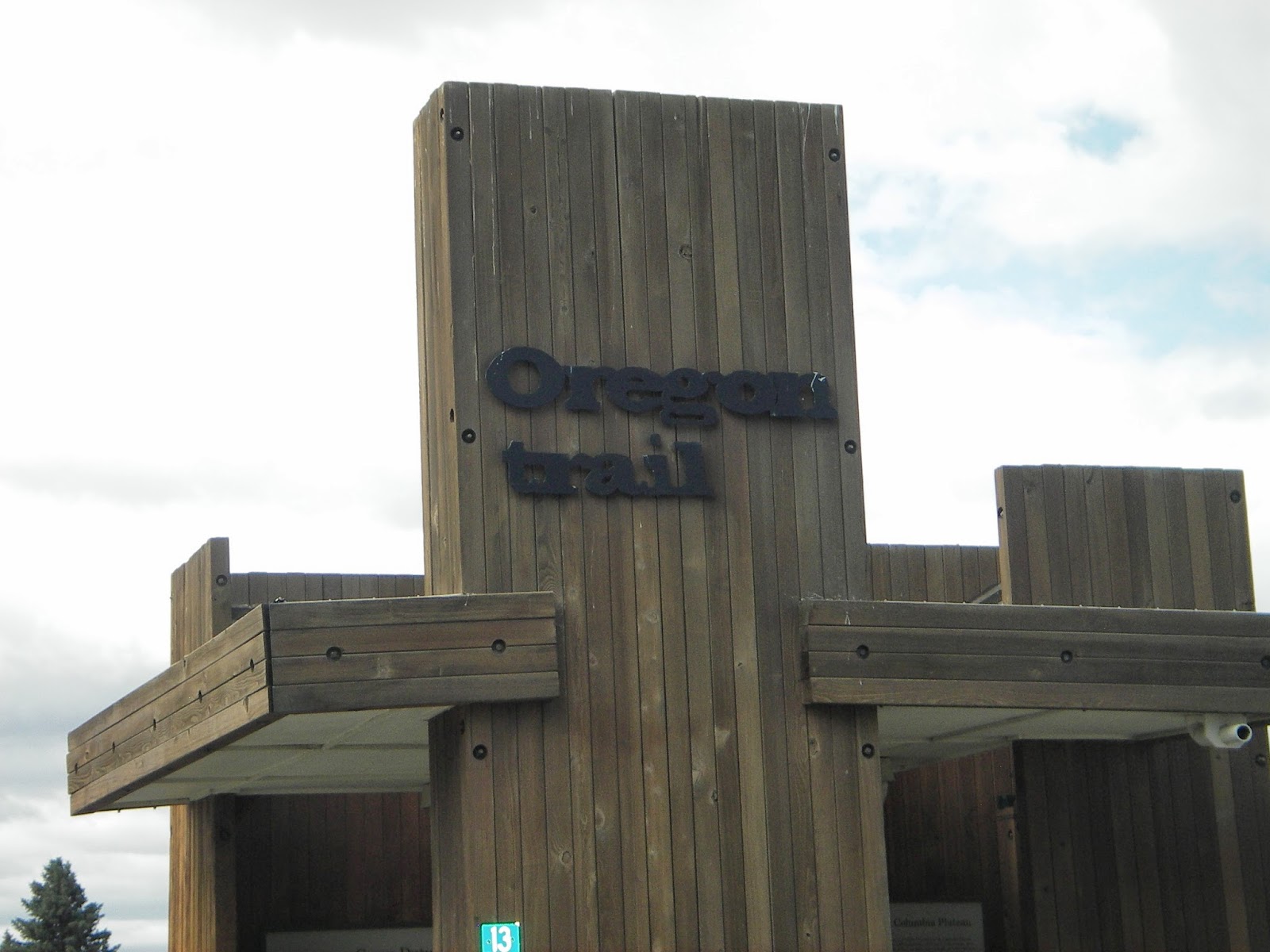 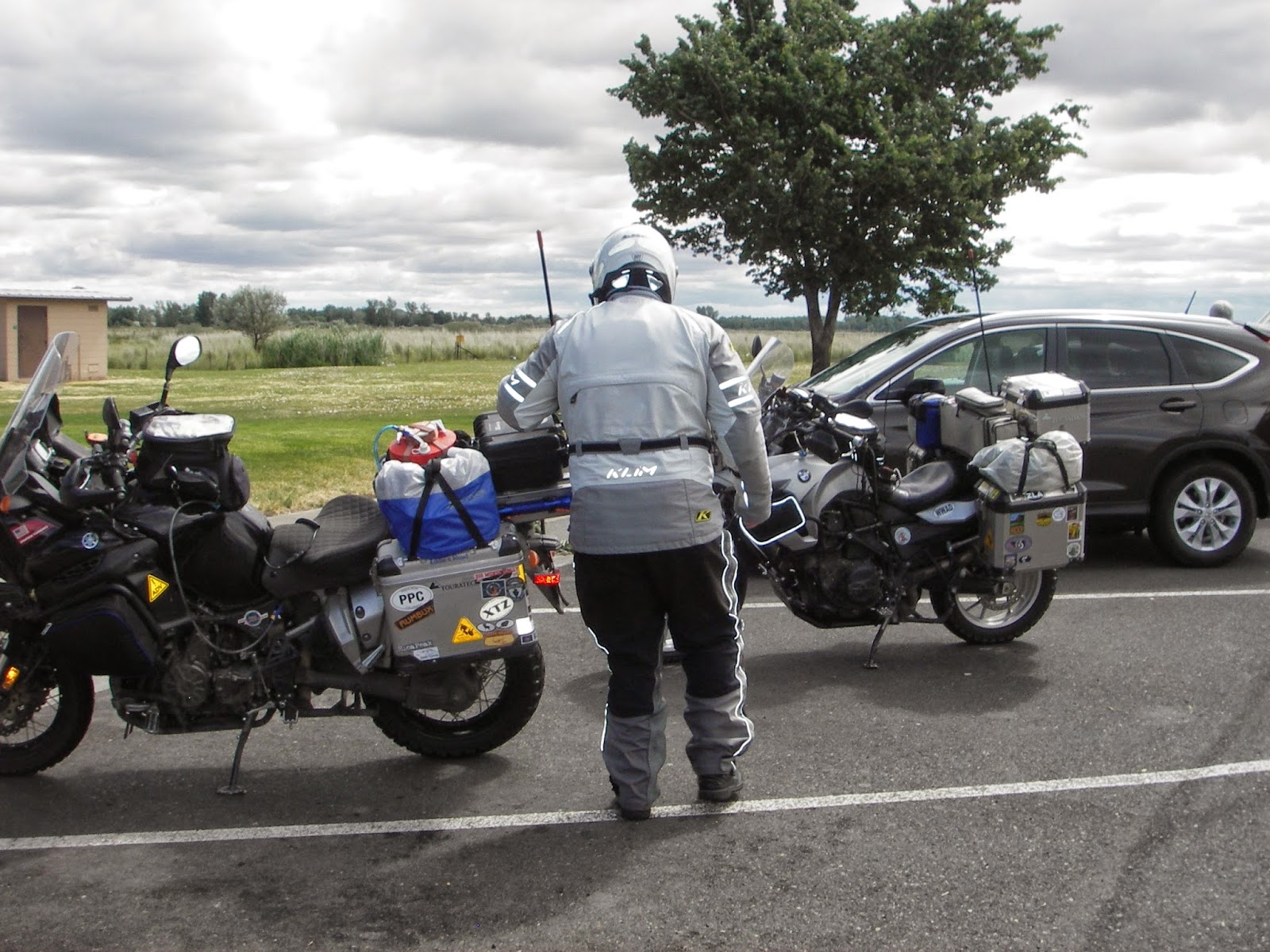 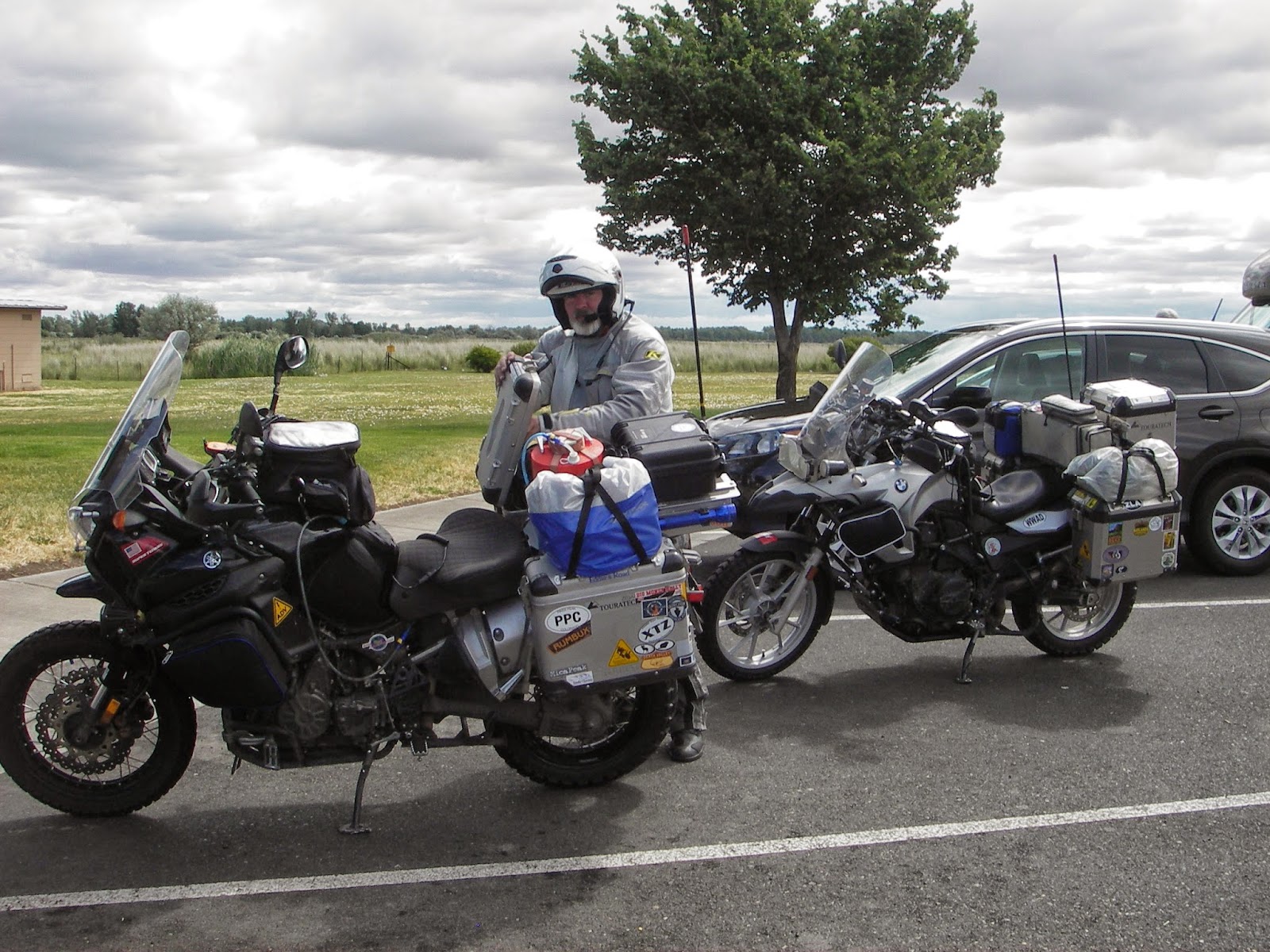 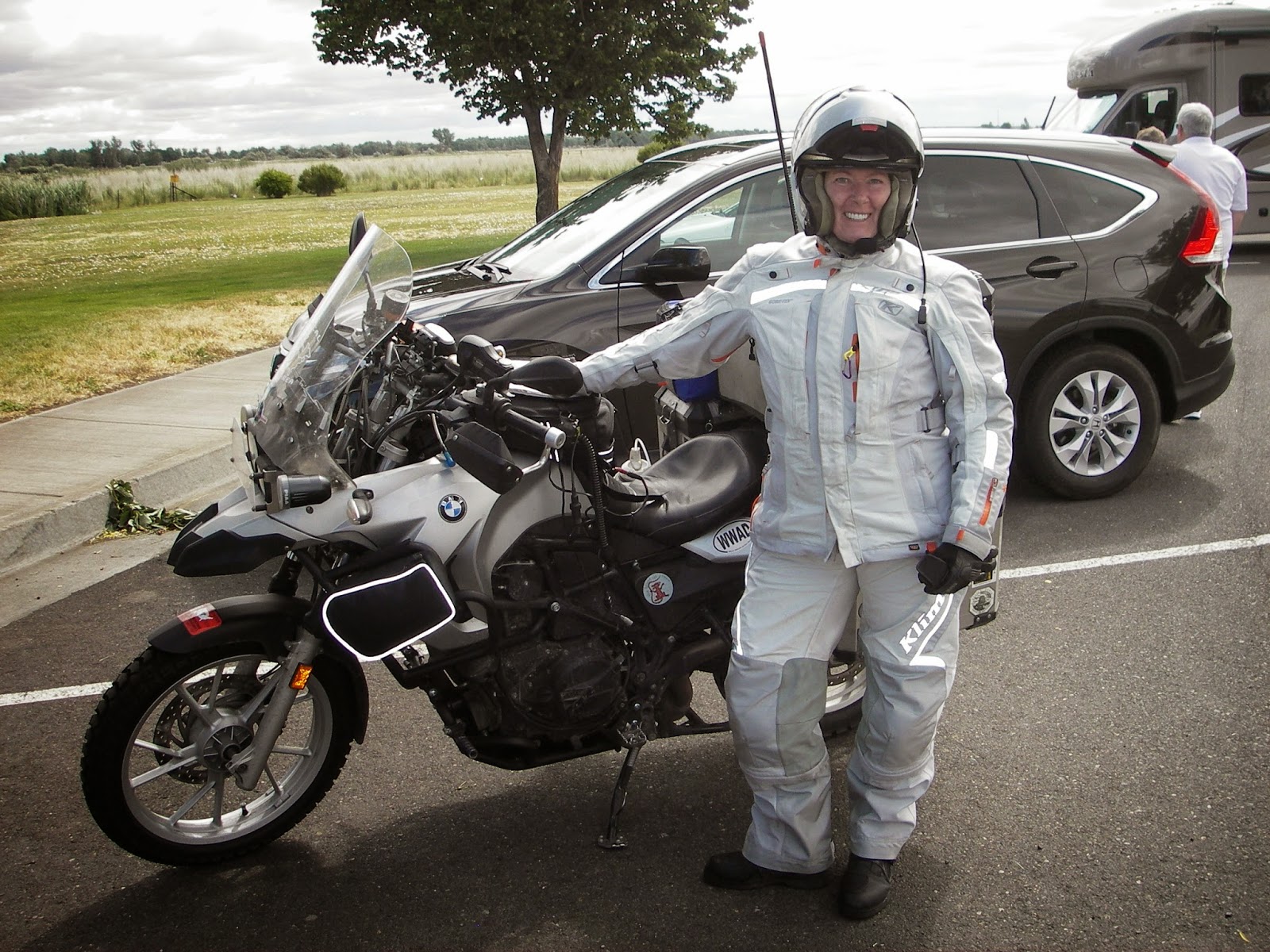 Eric had to make some roadside repairs.  His GPS/CB stuff flipped another fuse.  When we get stopped for more than one night I suspect he will track down the culprit.  But for now, it was just replace the fuse and move along. 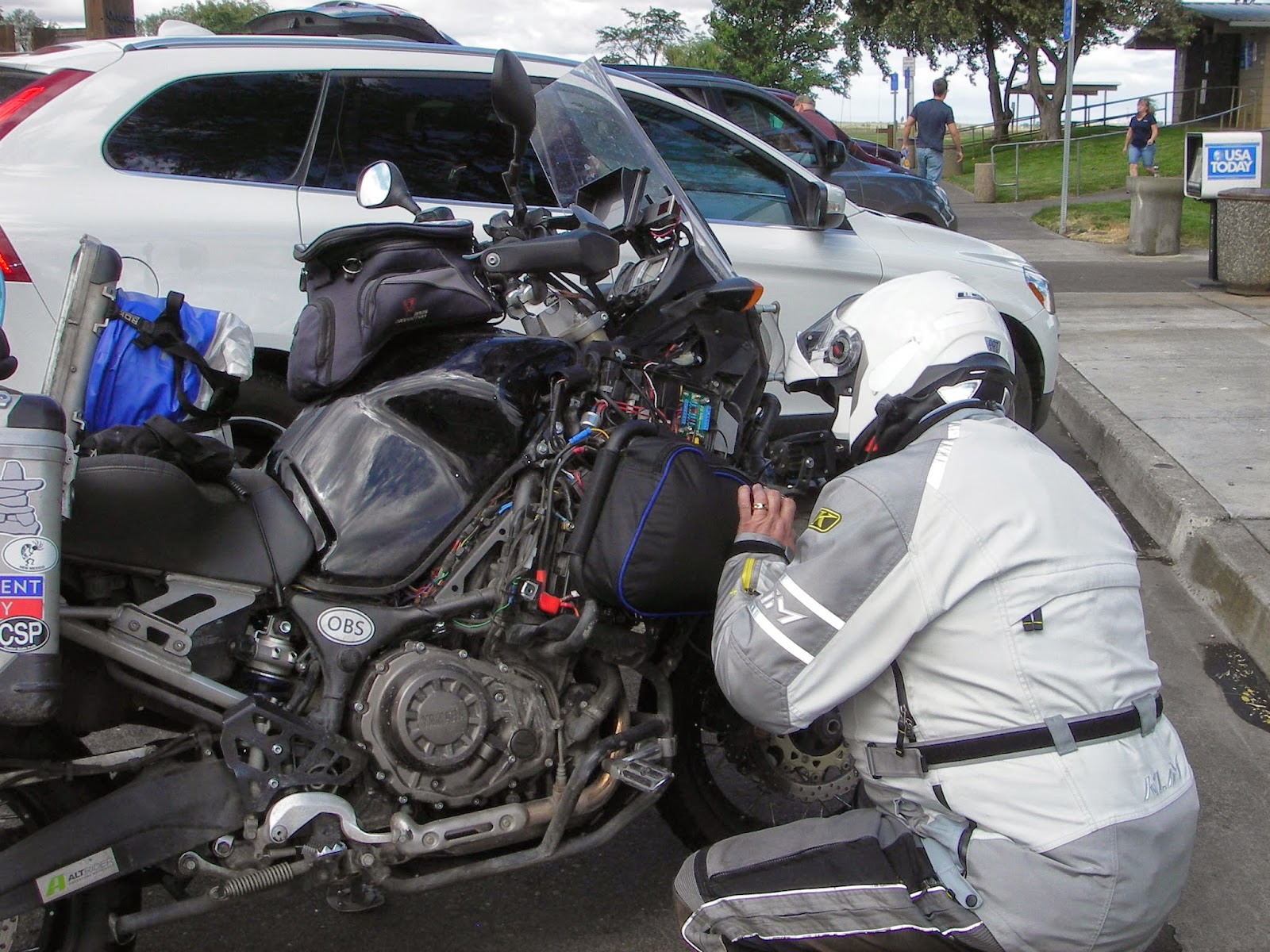 I've been trying to capture State signs as we travel along, however this was not going to happen between Oregon and Washington.  The "Welcome to Washington" sign is located mid point across the Columbia River on the bridge and no safe place to stop.  Oh well.  The wind was so fierce here that the Columbia had whitecaps!!

Anyway, goodbye Oregon and hello Washington!  This morning when we started out we stopped to gas up the bikes, I forgot we were in Oregon and was surprised when the attendant came out to swipe my card and hand me the pump!  That kind of threw off my routine and I had to double check everything.  Make sure I put the gas cap on, make sure I put my card away and zipped up the sleeve, that kind of thing.  It's amazing at how a little interruption in your routine can throw you off.  (Rallyists know this one for sure).  Oregon also has a top speed limit of 65 mph which we pretty much followed.  No need to call attention and get a performance award.  Yup, glad we've moved on :-)

We still had some serious wind but the rain was done, at least for a bit.  The clouds looked ominous but we were dry.  We hadn't eaten anything and I was getting hungry (and cranky, I need to be fed).  From the Oregon/Washington border, there is nothing until Tri-Cities.  As we entered Kennewick, WA we began looking for a likely eating place.  No fast food for me!  We finally spotted a Denny's (not the best, but better than Mickey D's).  We pulled into the parking lot as the rain clouds rolled in.  We quickly covered our tankbags, CB's and made the bikes rain ready then headed into the restaurant.

Man oh man, were we lucky.  As we doffed our gear and piled it onto the booth seat, the heavens opened up.  The wind roared in and the rain poured down.  Hahahaha...perfect timing for once!!  We ordered our food and enjoyed our meal, taking our time and checking email and silly stuff like that as the rain poured down.  I made use of this time to put the pinlock visor on my helmet.  (Good move).  We were not in a hurry to get back out in that weather.  Well, we waited long enough and the rain settled down to a little spit here and there and we made our break.

Back on the bikes, I told Eric that I needed to get fuel soon but would rather get out of town a bit.  It was very busy and quite congested with traffic and I don't much care for that.  Especially in a strange town and we had no effective CB communication.  So, off we went.  And we passed gas station after gas station until we were into the country and there was nothing to see but some vineyards, hayfields, farms, ranches and nothing else............

Okay, I wasn't going to worry until I hit about 20 miles into reserve.  So, on we went.  Because our CB's weren't working well we really couldn't communicate.  Eric assured me that he was keeping an eye on me and all I had to do was hit my turn signal and he would take the next exit.  Well, that wasn't reality :-)  I tried several times to signal an exit but he didn't see me.  Okay, I guessed worse case, I would run out of gas and he could siphon some from his bike to me or we could call AAA.  Hahaha, didn't matter.  We made it to a fuel station just as my bike hit reserve.  Great timing!
We motored on.  We didn't stop much today as we had miles to make and the weather was a concern.  We went through Moses Lake and pointed the bikes north on Hiway 17.  What a treat!  A two lane rural highway with little to no traffic especially after Soap Lake.  We were able to move at the speed limit and make time and miles.  It was a lovely ride along the Columbia River.  We made a rest stop at Blue Lake.  The rain held off and we had a pleasant stop. 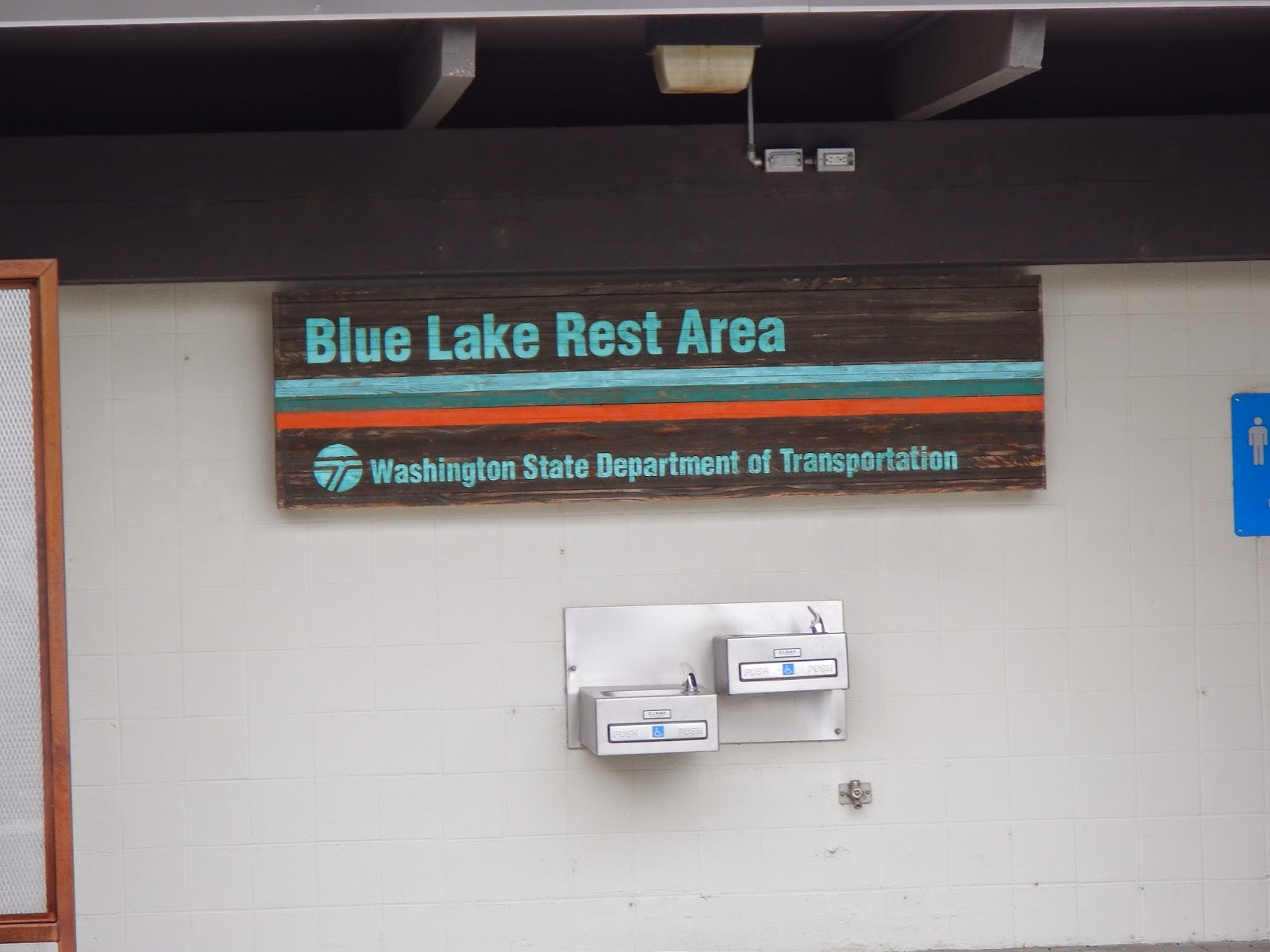 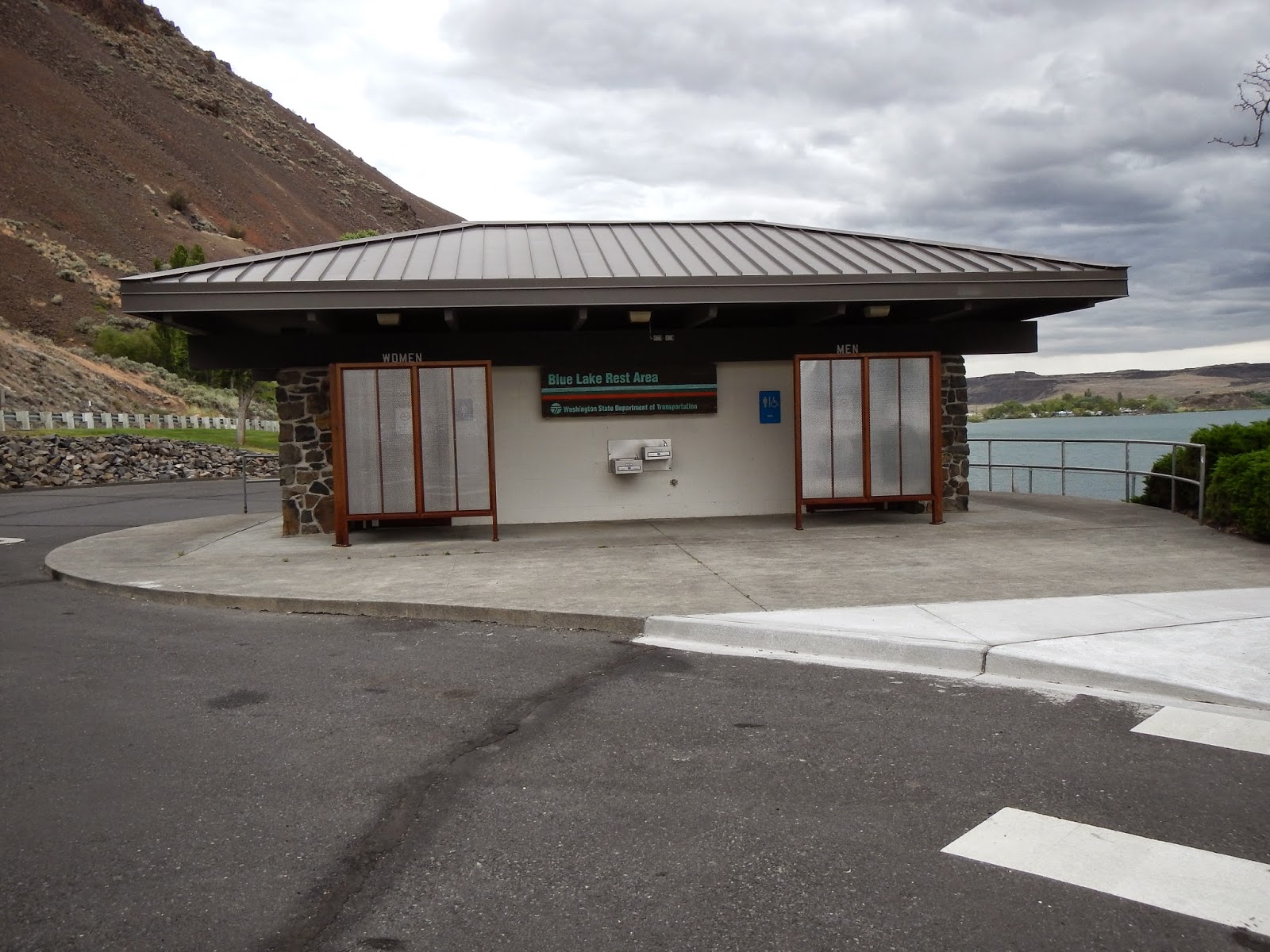 Who knew we were following the Washington State Birding Trail?  I did spy an eagle's nest atop a pole a few miles before here. 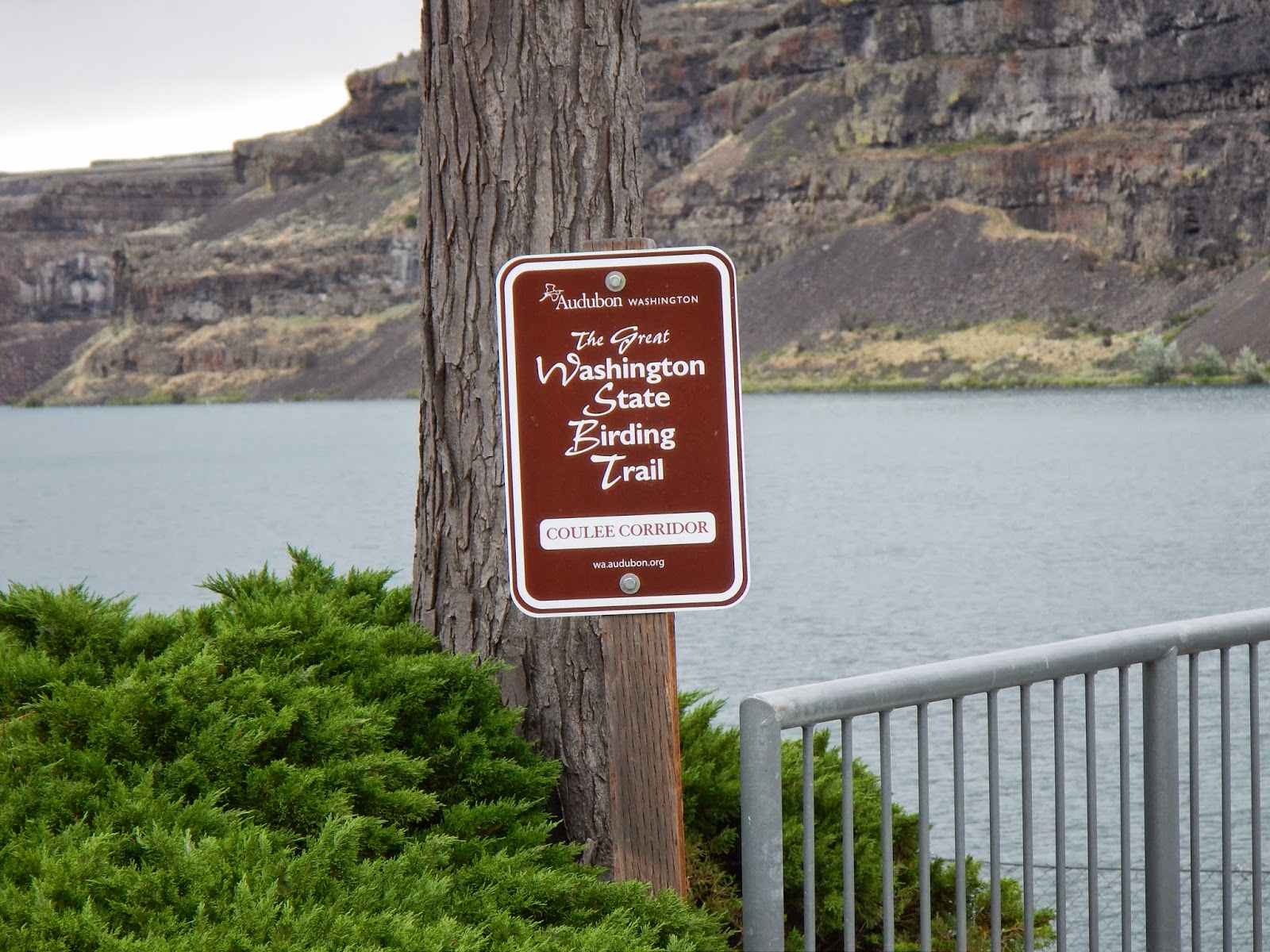 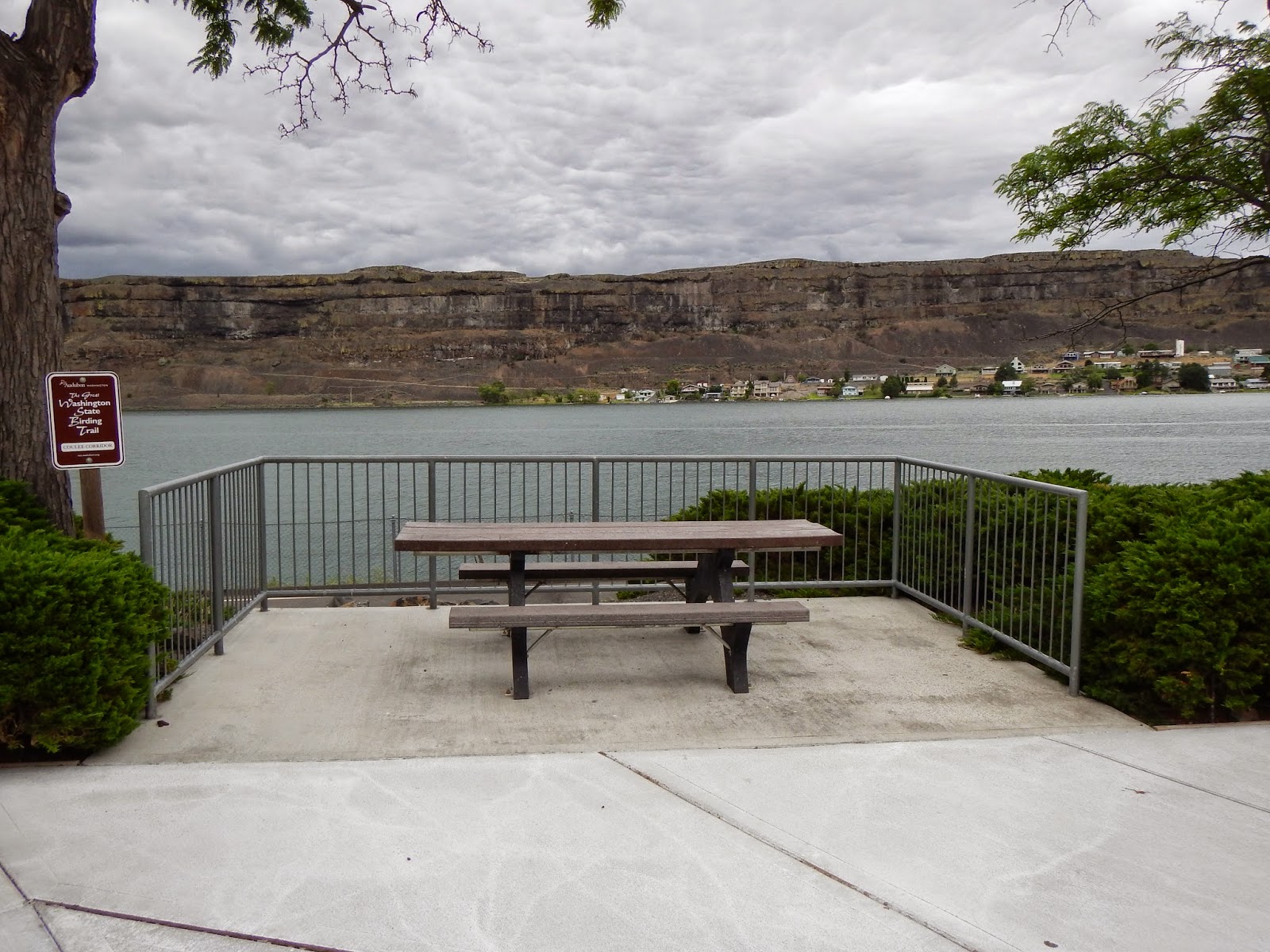 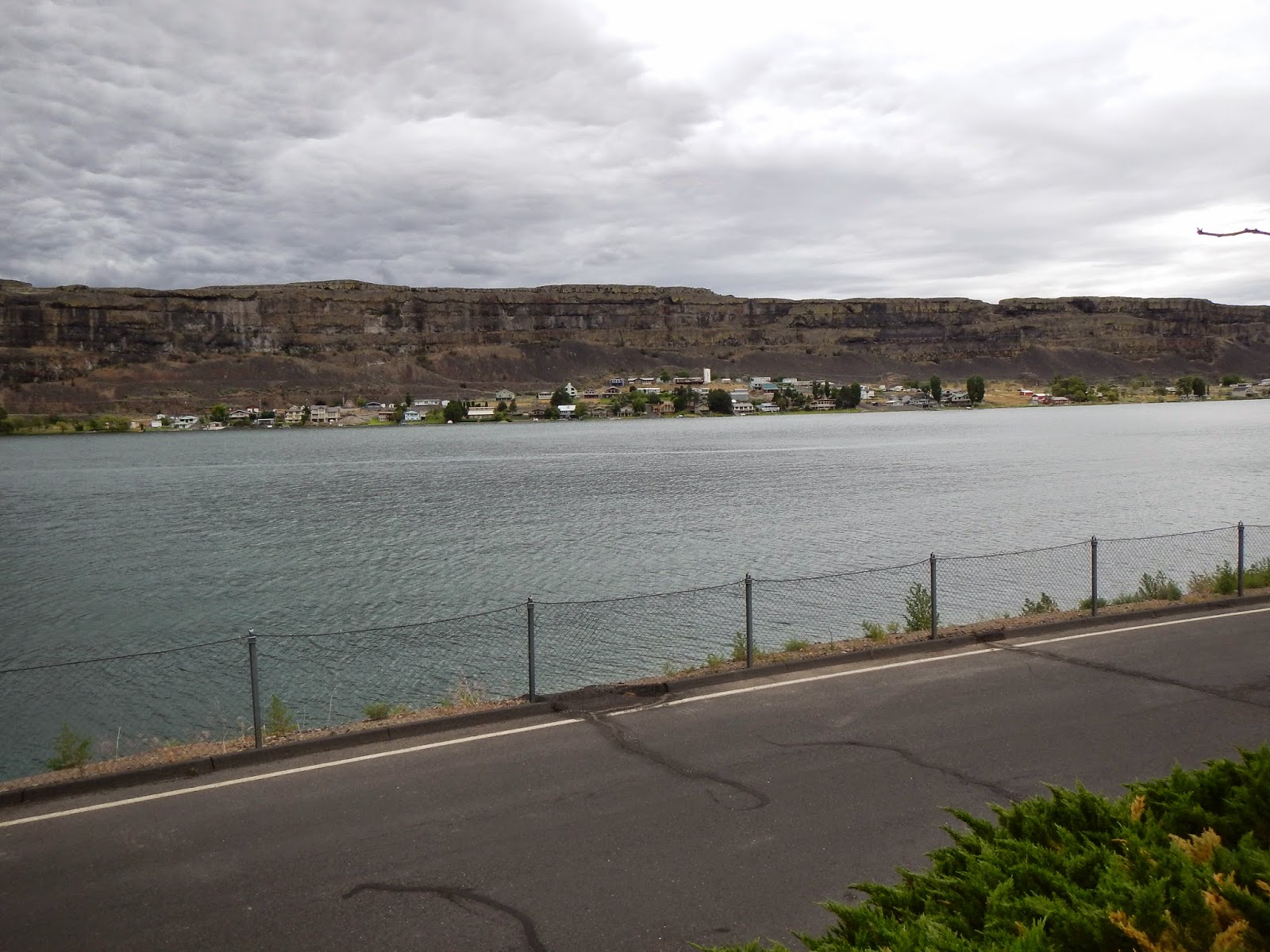 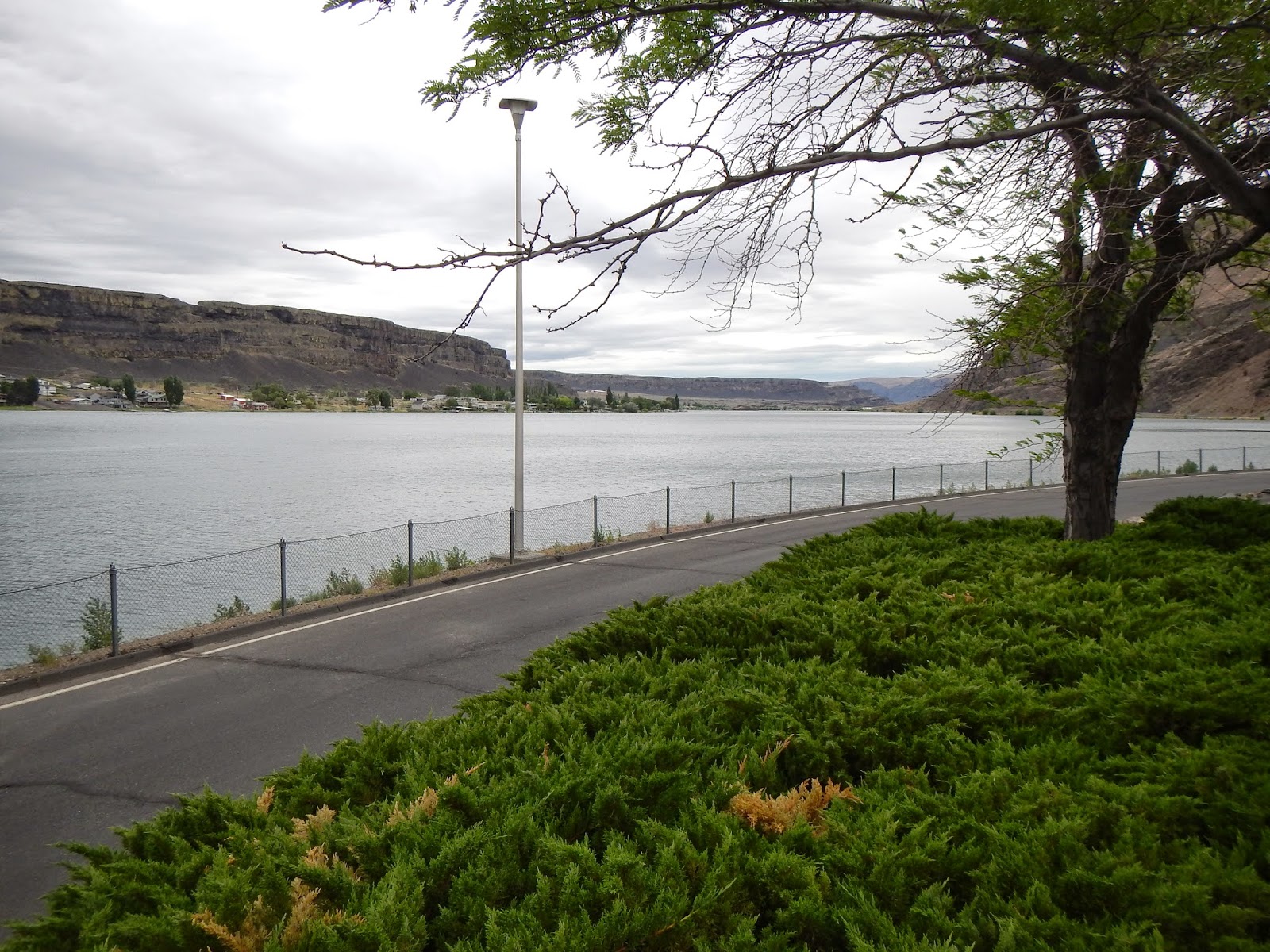 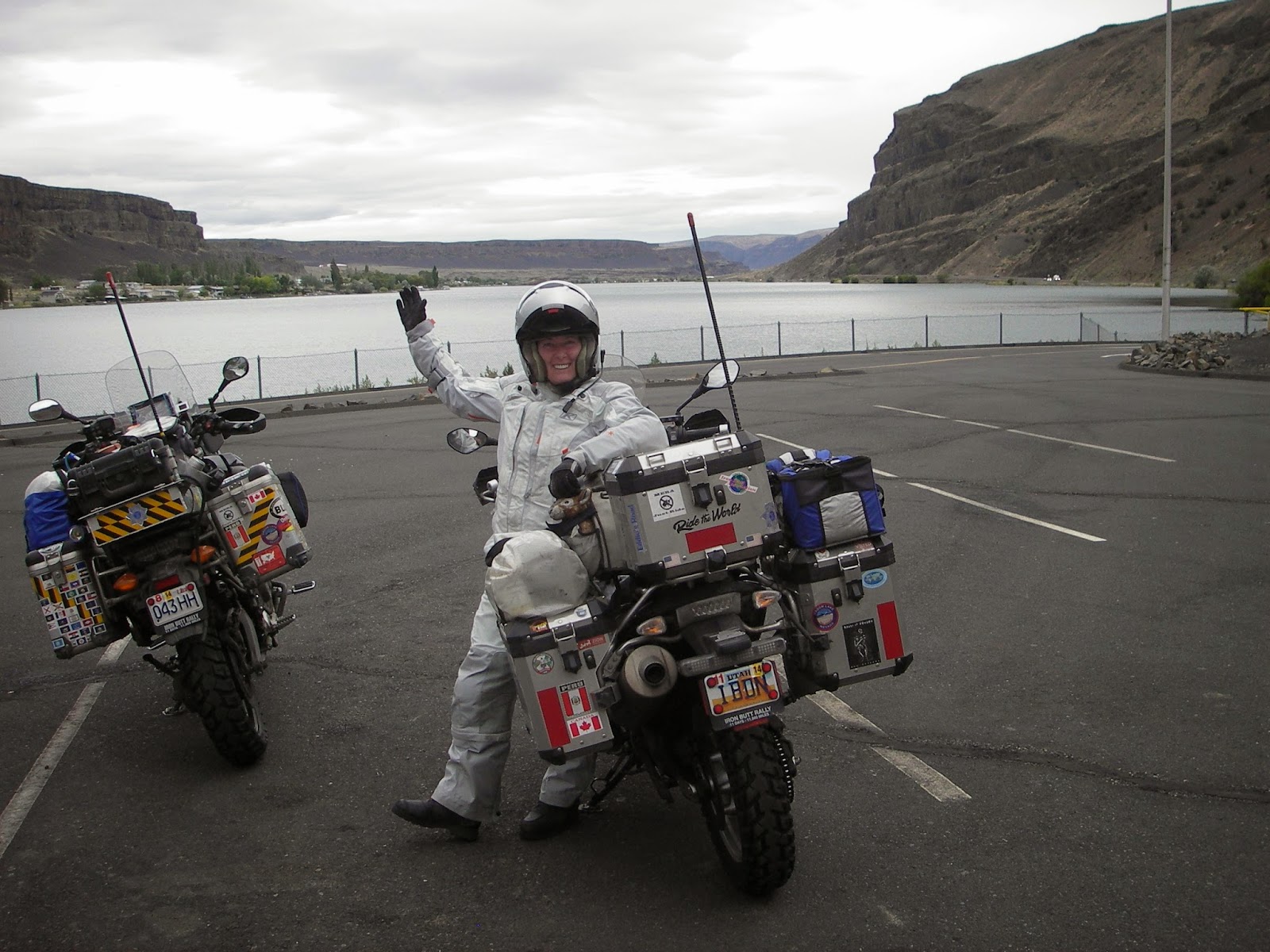 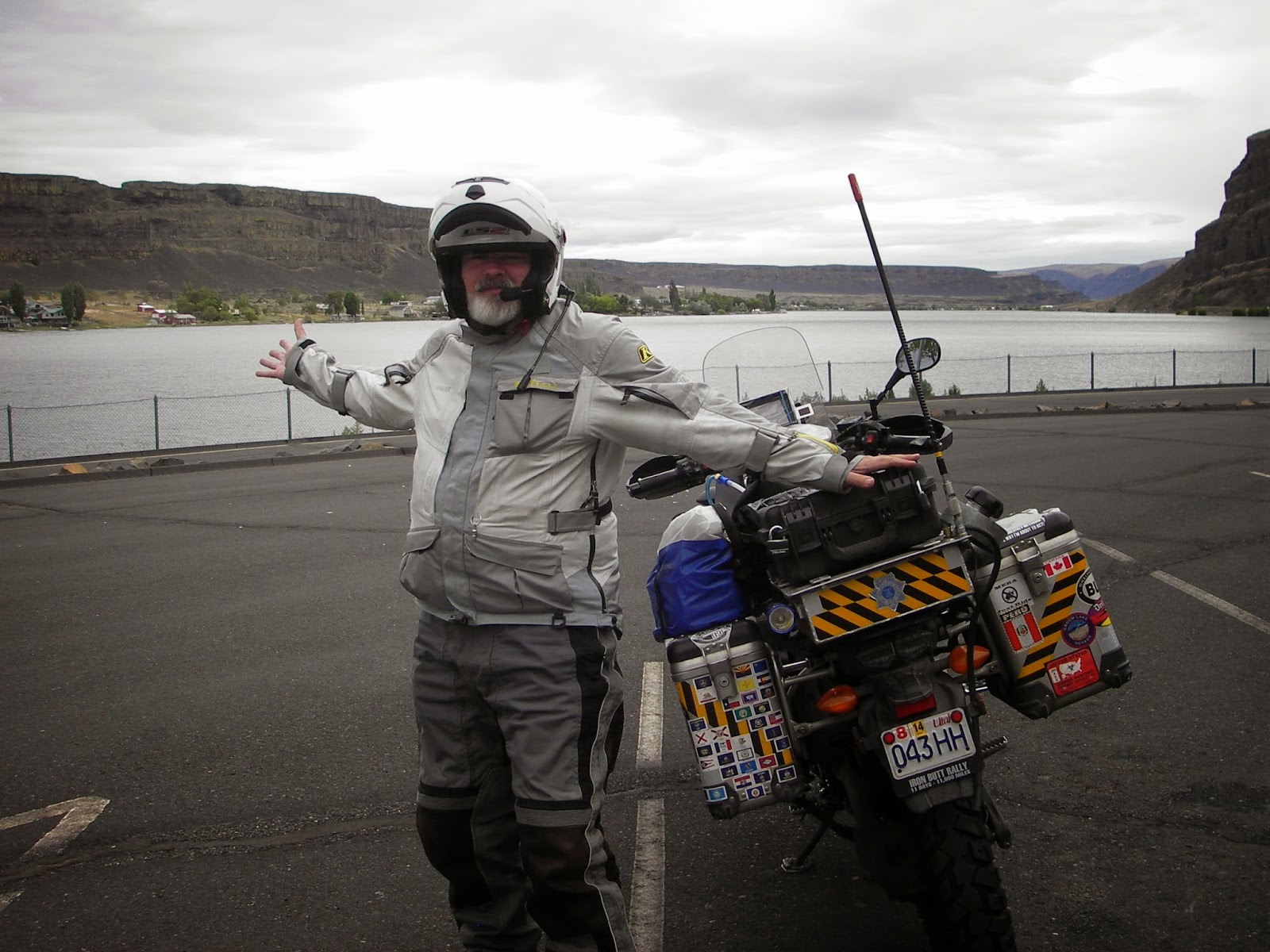 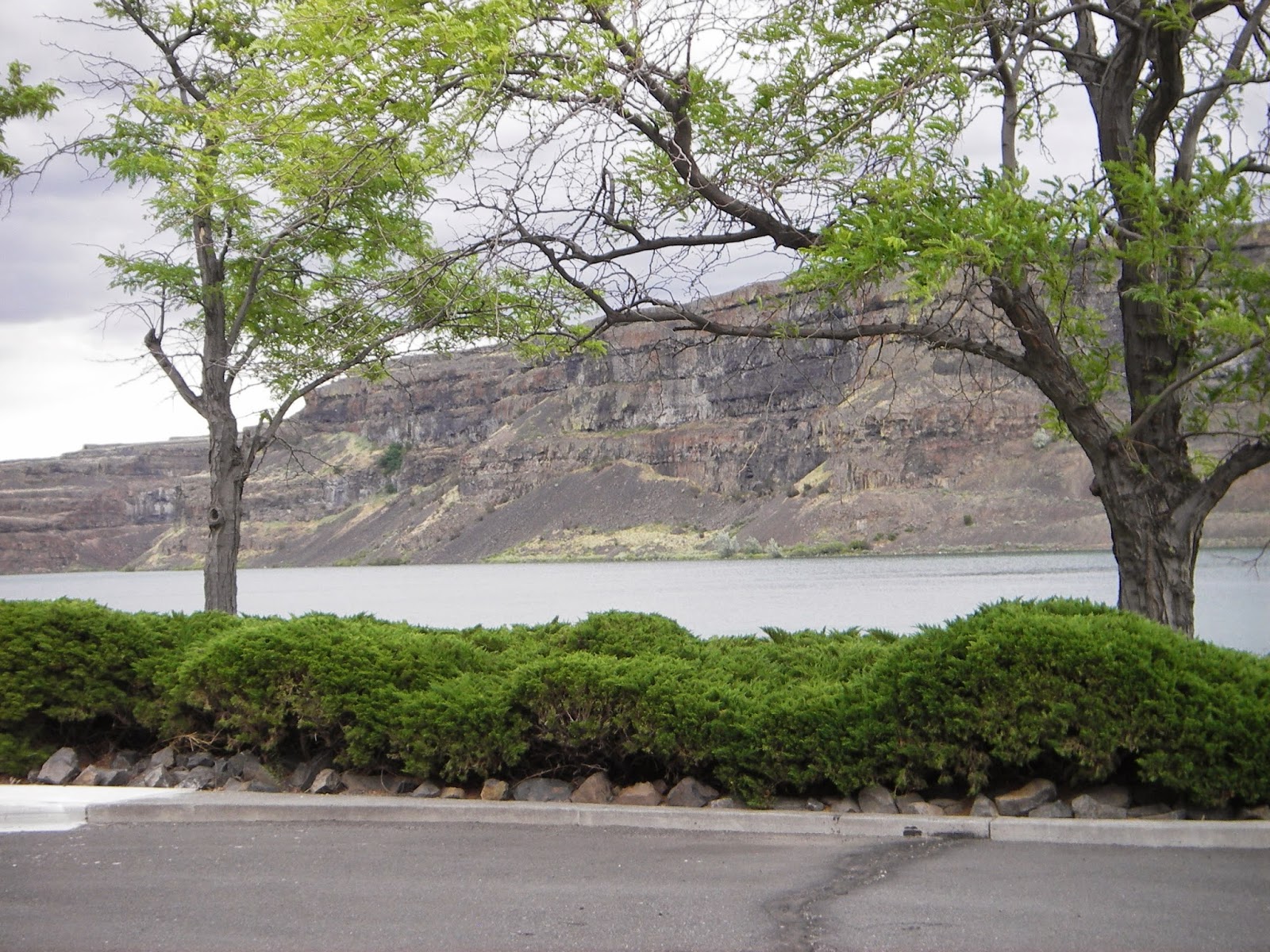 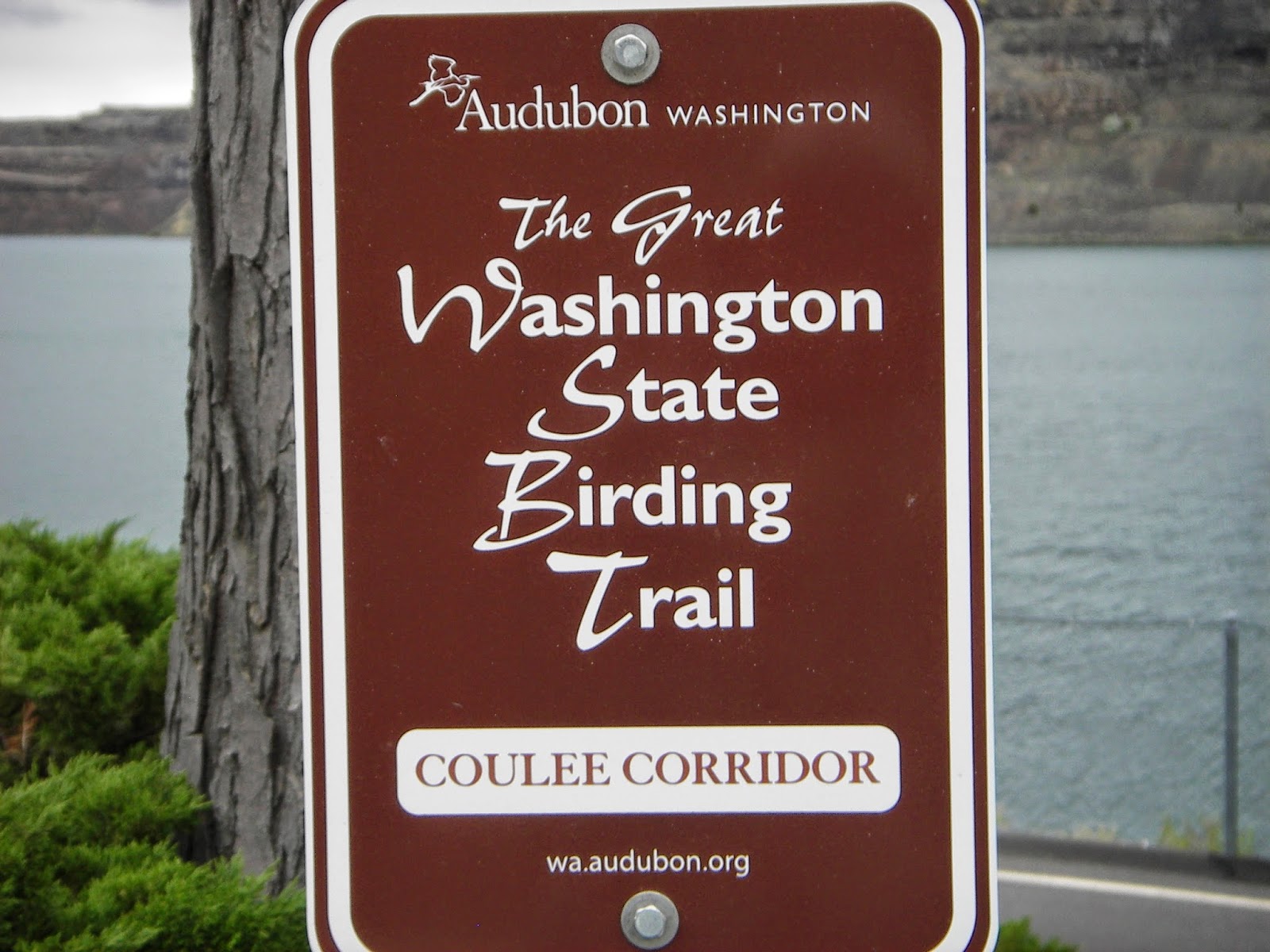 So that's probably the most photos we took at any one place.  Today was not about flower sniffin, it was about putting on some miles and reaching our destination at a reasonable hour so we could chill a bit, have dinner, check email and get a good night sleep.

We finally rolled into Omak, Washington which was our goal for the day.  After a couple of GPS snafu's, we found our motel for the night.  This is a small Mom & Pop Motel (my absolute favorite kind of place to stay) that was exceptionally clean and manicured.  We secured a room and as I put my bike to bed, Eric took of on recon to find food and some other necessities. 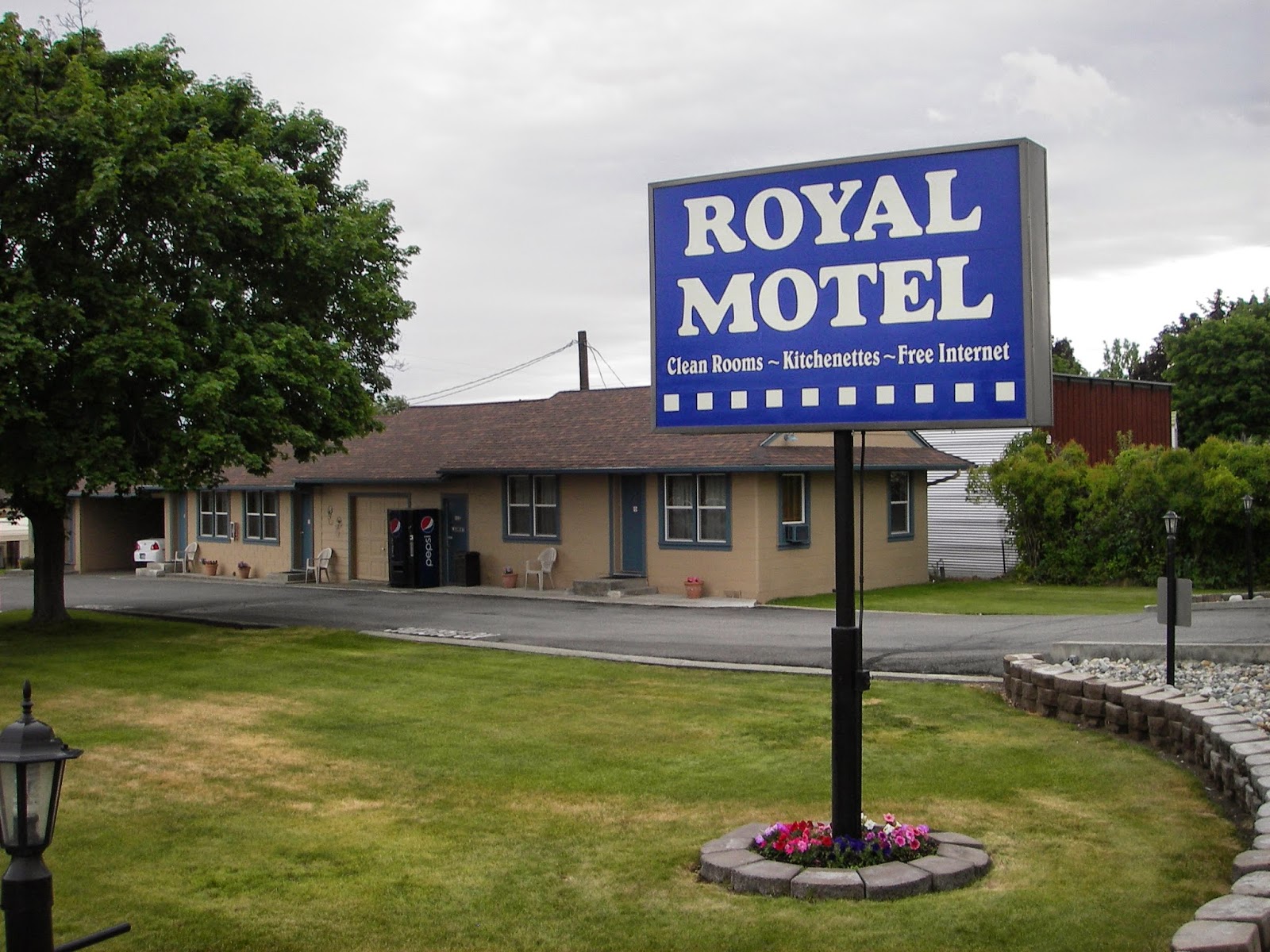 It didn't take me long to unpack and get the F650GS covered up and ready for bed. 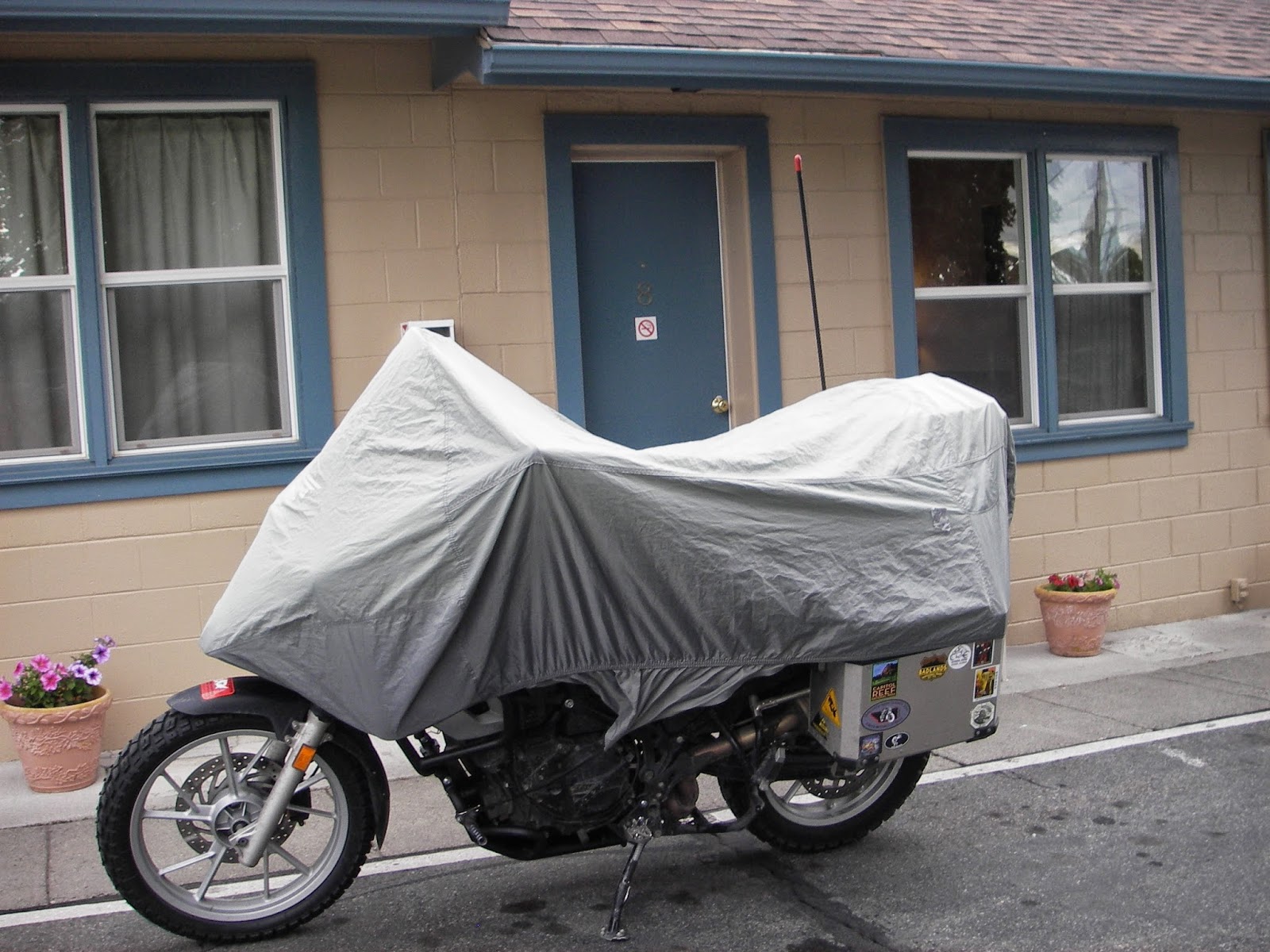 Very small, only maybe 10 rooms, but immaculate.  This is so much better than the chain motels.  We had great service from the owners and we'll be posting a nice review on TripAdvisor. 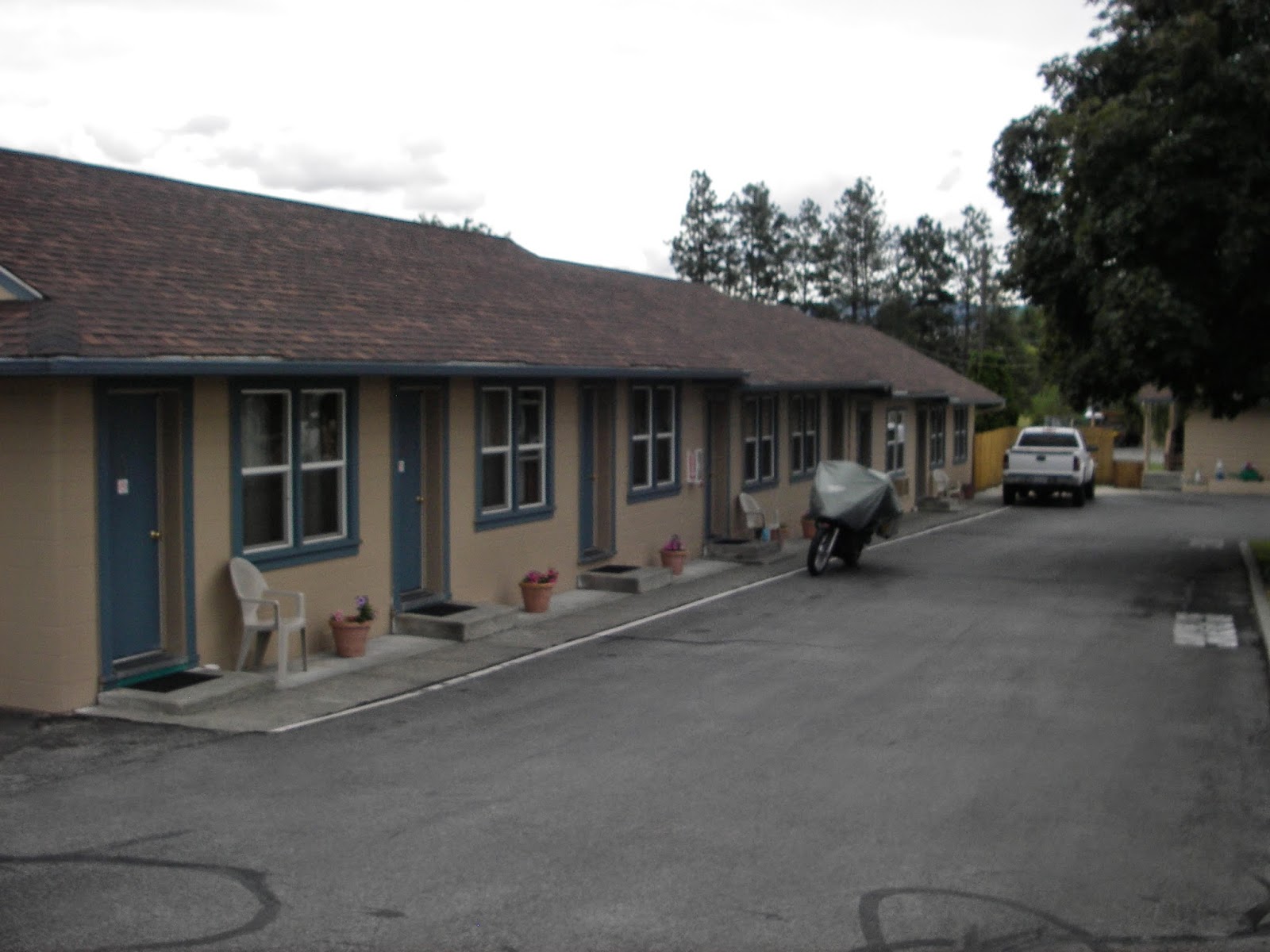 When Eric returned from his recon he brought menus from several nearby restaurants as well as photos from the Safeway Deli.  I sure married a great guy!!!  We decided on Mexican, called in our order and Eric was off to collect it.  It short order, we were seated at the desk eating a wonderful meal.

That pretty much recaps today's ride and adventure.  Just some random thoughts -- riding along, taking in deep breaths, smelling the freshly cut alfalfa, enjoying the rich aroma and getting another deep breath ready only to be assaulted by the pungent odor of a stockyard or poultry farm.  Guess they go hand in hand, but I prefer the alfalfa smell.

Another thought -- riding along to encounter a lane squatter.  You know the type.  The cager who sits in the left lane but isn't passing anyone but everytime you try to get by them they pick up speed?  Yeah, what's up with that?  Don't they realize how dangerous it is to force people to pass on the right?  Ding-a-lings.  Wish I had a secret power to make them move to the right (with the appropriate signal).  Those folks never use signals either.  Arghhhhhh.....!

Another thought -- you meet the nicest people in the most unexpected places.  Lots of times people are just weirdos, or annoying. But just every once in a while you meet awesome people that make you smile and are a sparkle to your day.

We have another fairly big ride day tomorrow.  Our goal is Quesnel, BC.  Yup, we'll be crossing the border into that foreign country called Canada :-)  We'll have to watch our P's & Q's and keep our speed in kilometers.  Oh, we'll also have to pump our fuel in liters rather than gallons. Haha, doesn't really matter, cause I'll just pump in enough gas to fill the tanks.  You all can do the conversions but I'm not going to worry about it.  I will worry about speed in kilometers though!

So, I'm sure I missed some stuff, but that's the summary of our day.  It's just so wonderfully glorious to be able to ride all day knowing you get to ride all day the next day (and not be on a Rally Clock).  I'm really enjoying this and hope you are too!