We had a great night's sleep in Stewart and got up early, packed and hopped on the bikes under semi-cloudy skies.  We we're hoping that the sun would win :-)  We rode back out 37A to Meziadin only to continue on the 37 to Watson Lake.  Well, the GPS didn't really like that but we made her obey!  Missy Garmin wanted to take me over 1,000 miles out of my way to get to Watson Lake, silly girl.

The sky continued to cloud up instead of sun up so I figured we were in for some weather.  We motored on in kind of chilly temps but no rain.  For the most part we had a good speed of 60-65 mph going on. And then.....we hit the road construction.  Not really, it was bridge repair.  Not really, it was bridge cleaning.  We were stopped just before an iron grate bridge and could see the workers using a high pressure water hose to clean out the bridge grates.  Okay....we stopped.  I wanted to have a smoke but that wasn't going to happen because the bugs and mosquitoes were having a hay day with the stopped folks.  I didn't dare open my visor.  No way, nope, not gonna happen.  So we waited.  Maybe 15 minutes.  Finally they let us through.  Oh boy, a very wet, grated bridge. Yup, I just motored across that puppy (with clenched cheeks). It really wasn't a big deal.  Yeah, I can say that now :-)  It was the first of many.

So then we had to pass a number of RV type vehicles, more butt clenching :-)  The weather got worse.  Cold, brrrrrr..... I had my heated liner and grips turned up.  Brrrrr......  We stopped at Bell 2 Lodge for brekkie.  I would say maybe 150 miles from our start at Stewart.  I was hungry and needed fuel in the bike.  So, we gassed up and may a beeline to the lodge for food. 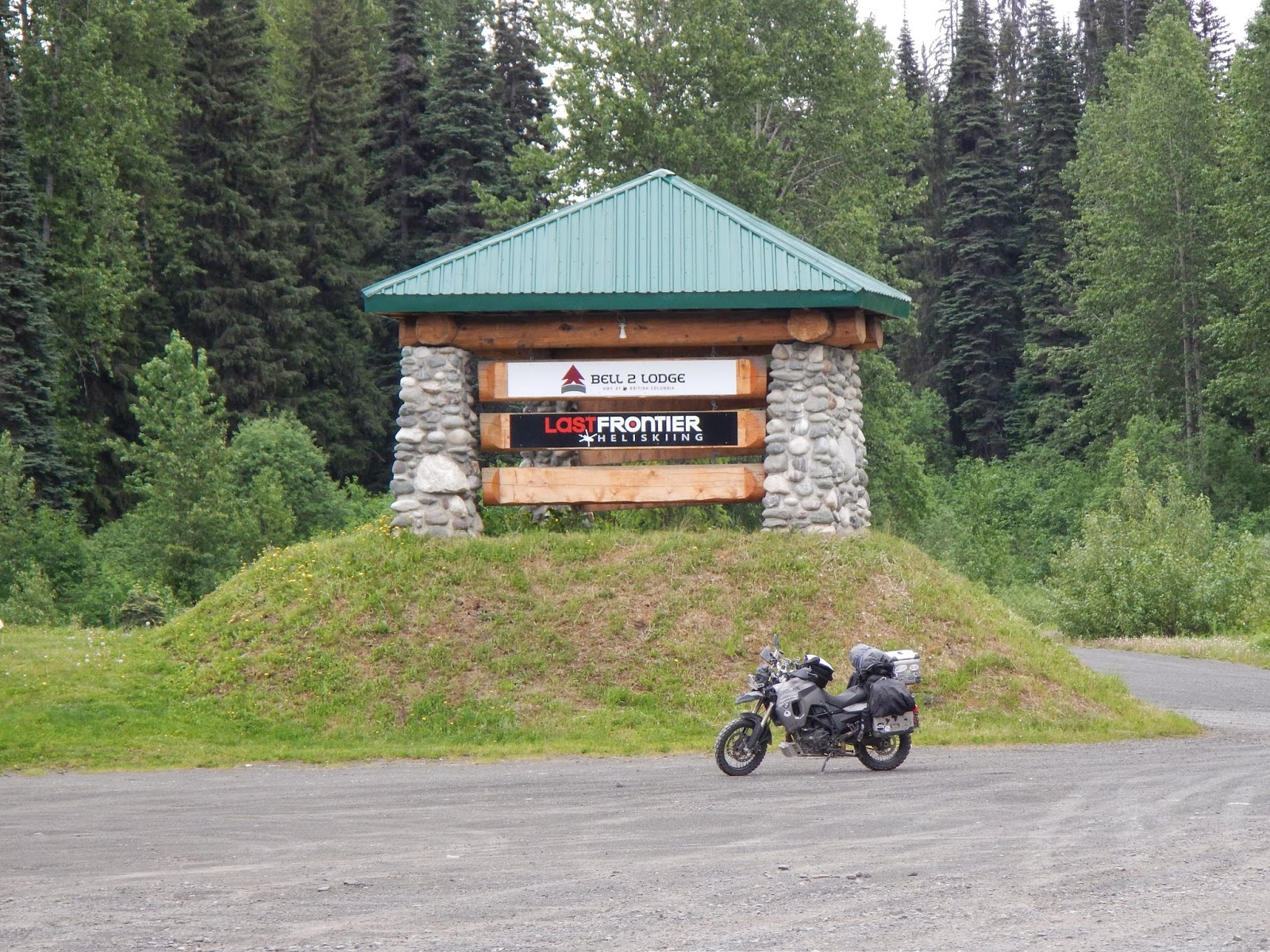 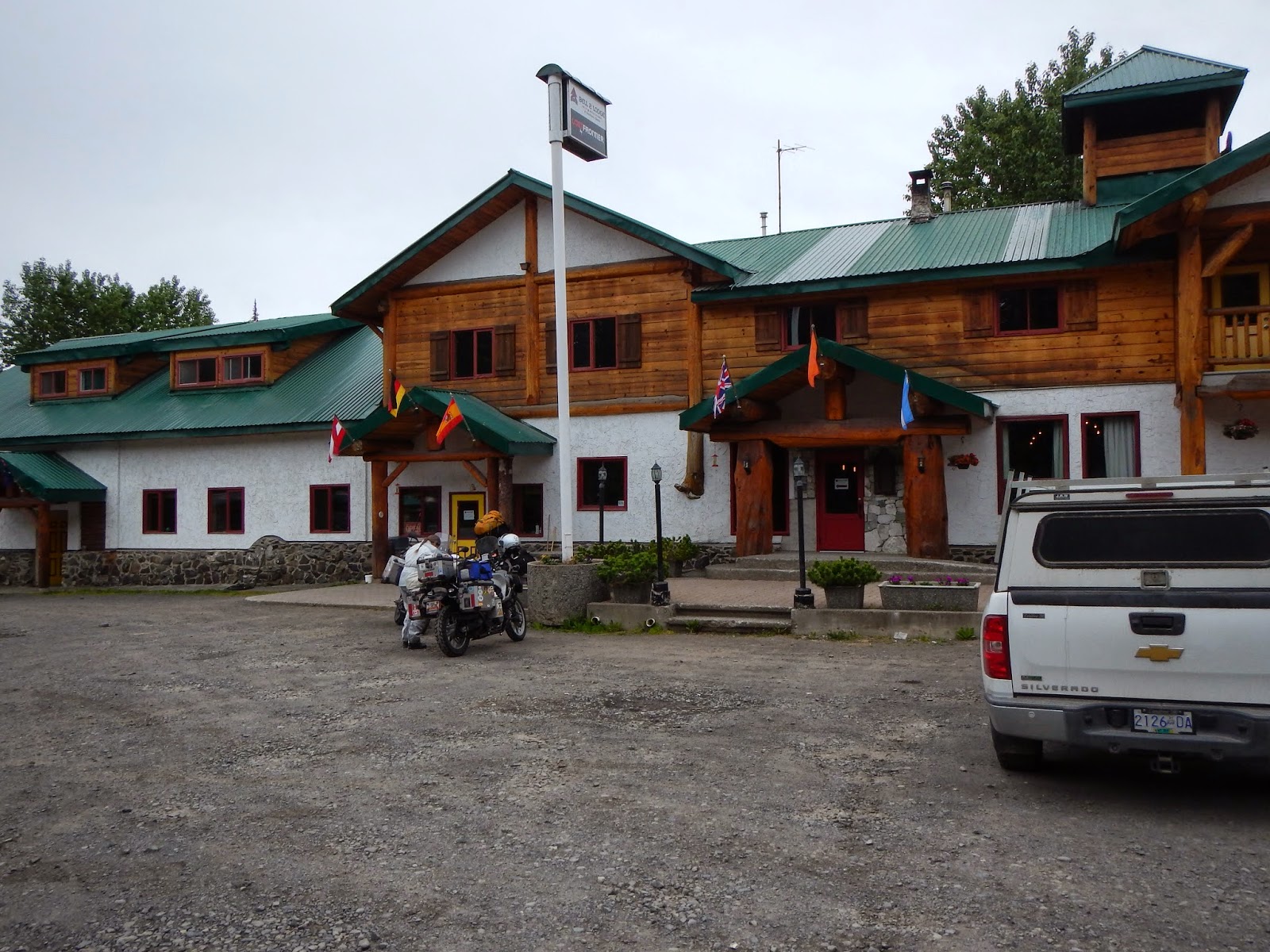 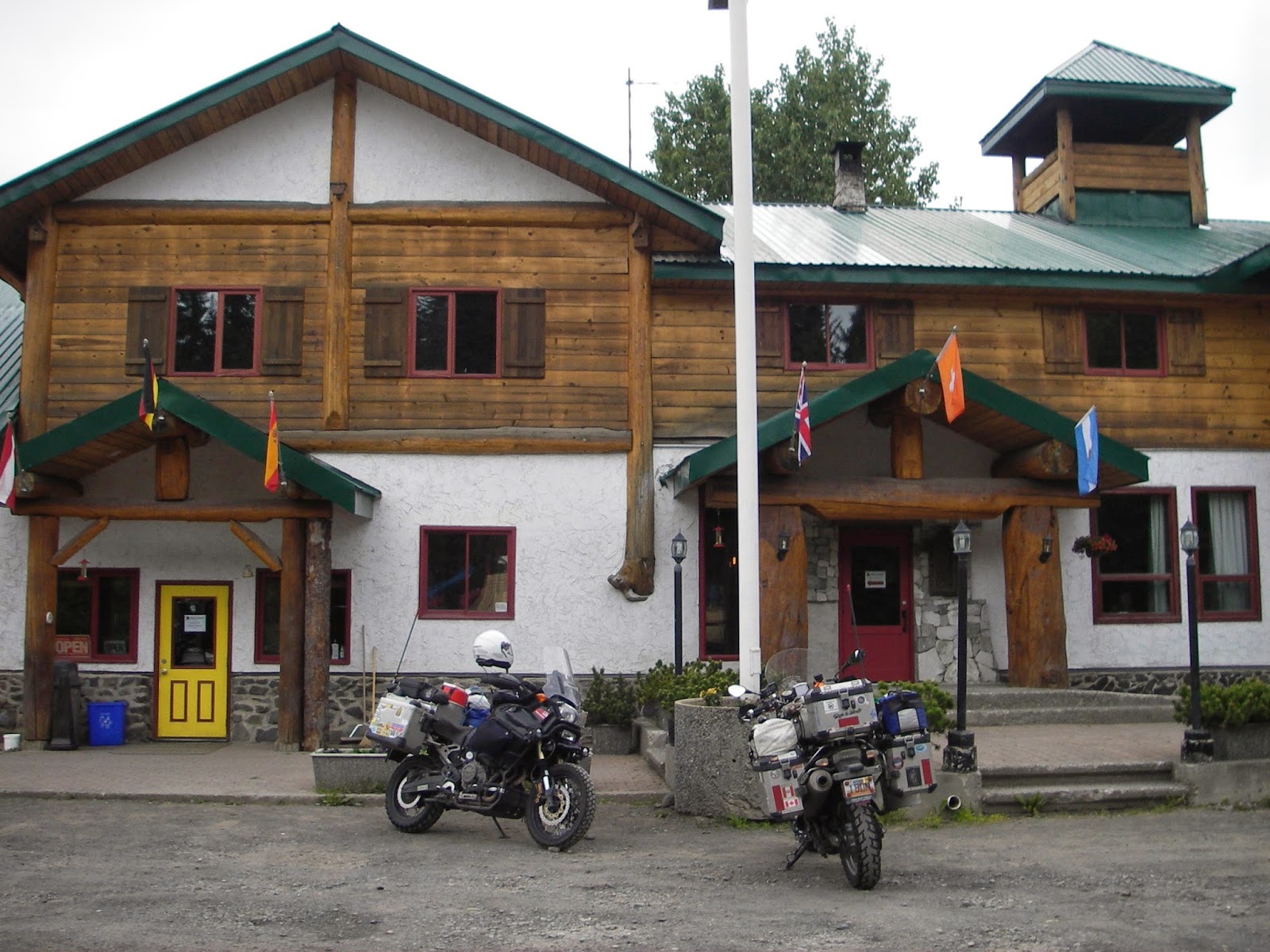 We had a lovely brekkie here, and hopped back on the bikes.  The weather began to get ugly.  We had a at least another 350 miles to go and it started to rain.  And the temperatures began to drop.  Not nice... heck....We put on our pinlock visors and waterproof gloves, covered our tankbags and cb radios. We were ready for rain and rain it did.  I'm so happy I purchased the Klim gear because it really is waterproof.  I stayed dry and warm. I had my heated liner plugged in and it kept me nice and warm.  My heated grips kept my hands warm and my gloves did a pretty good job of keeping my hands dry.  I had a few issues later in the day, but here, all is golden!!  Not really, if you look close, you can see it is raining and my windscreen is wet.  It really started to rain hard here :-)  But, I'm still smiling! 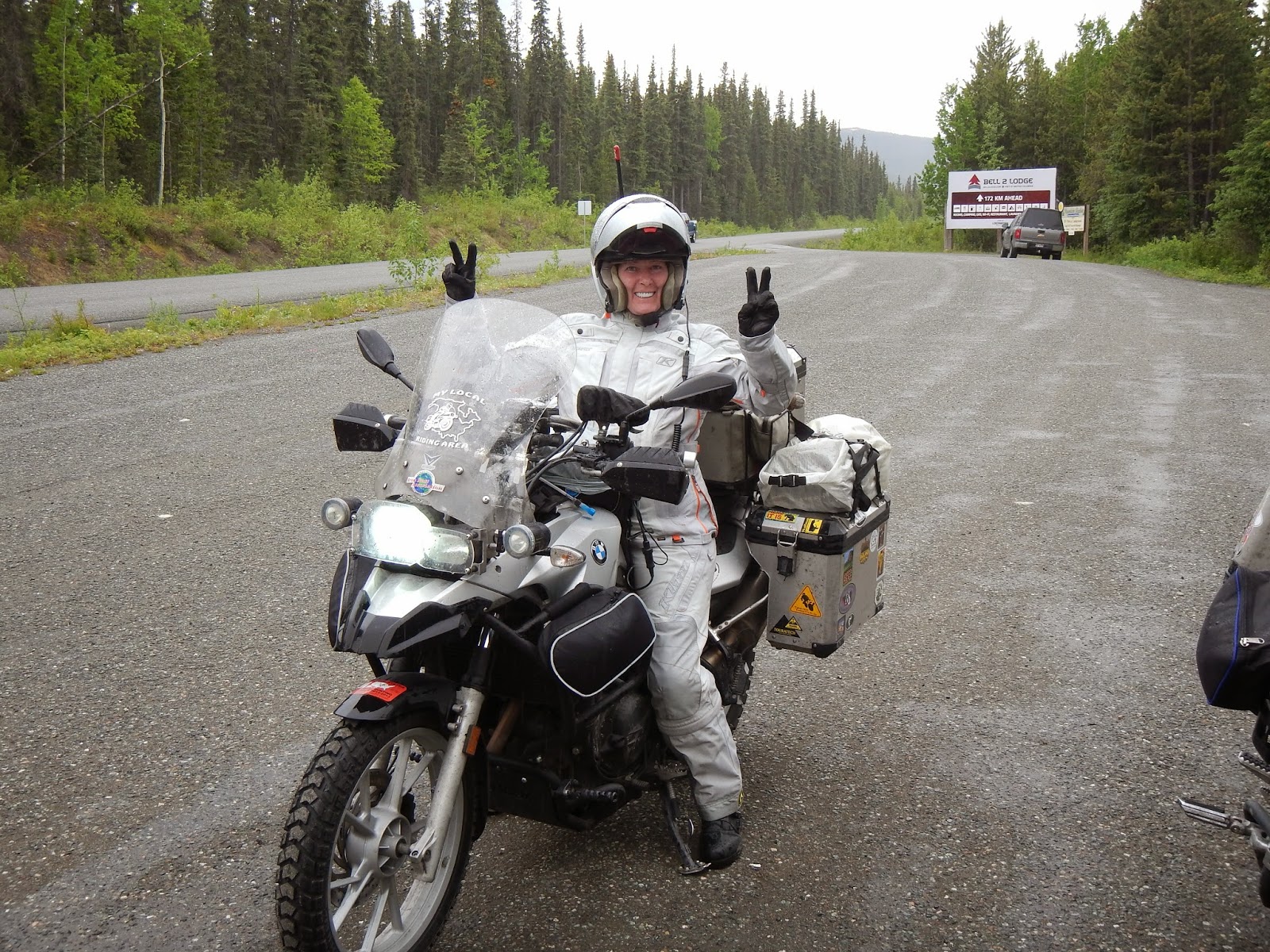 There is not really a lot to report here.  We just covered up and rode on.  I guess we averaged about 60 to 64 mph though most of this ride. And then.....and then...and then... the road got awful.  Heaves and ridges and off camber turns and everything that can make a motorcycle go wrong.  Darn, that road got awful!!  Potholes big enough to swallow a VW Bug!!!  no kidding .....serious bad road.

Funny, because when I rode this 4 years ago, it was awesome and wonderful.  Full on sunshine and not so many potholes (although the last few miles, there were plenty of potholes!). So here we go....

We didn't stop for photos, we did stop to pee :-)  It got cold, really cold, brrrr.  I kept thinking it might snow but it didn't get quite that cold.  Mile after mile of brrrrr...   We were off again and on again of cold and rain.  We did see some bears :-)  Eric had a 5 count and I had a four.  That was fun. But most of this ride was a wild one.  Wild in the sense of the road was a heave here and a heave there.  Rolling ruts and potholes.  Very difficult to keep an even speed because the road was so uneven.

This went on for miles and miles.  The sky was grey and the rain came down.  Darn, yesterday was so incredibly beautiful and today....not so much.

I didn't even tell you about my heated grips giving up the ghost.  Damn, my hands got cold. A restart on the bike made it better :-)  But dang, I spent 75 miles with freezing hands!!!

After hours and hours of riding, we finally got to the Yukon border.  Hooray!!! 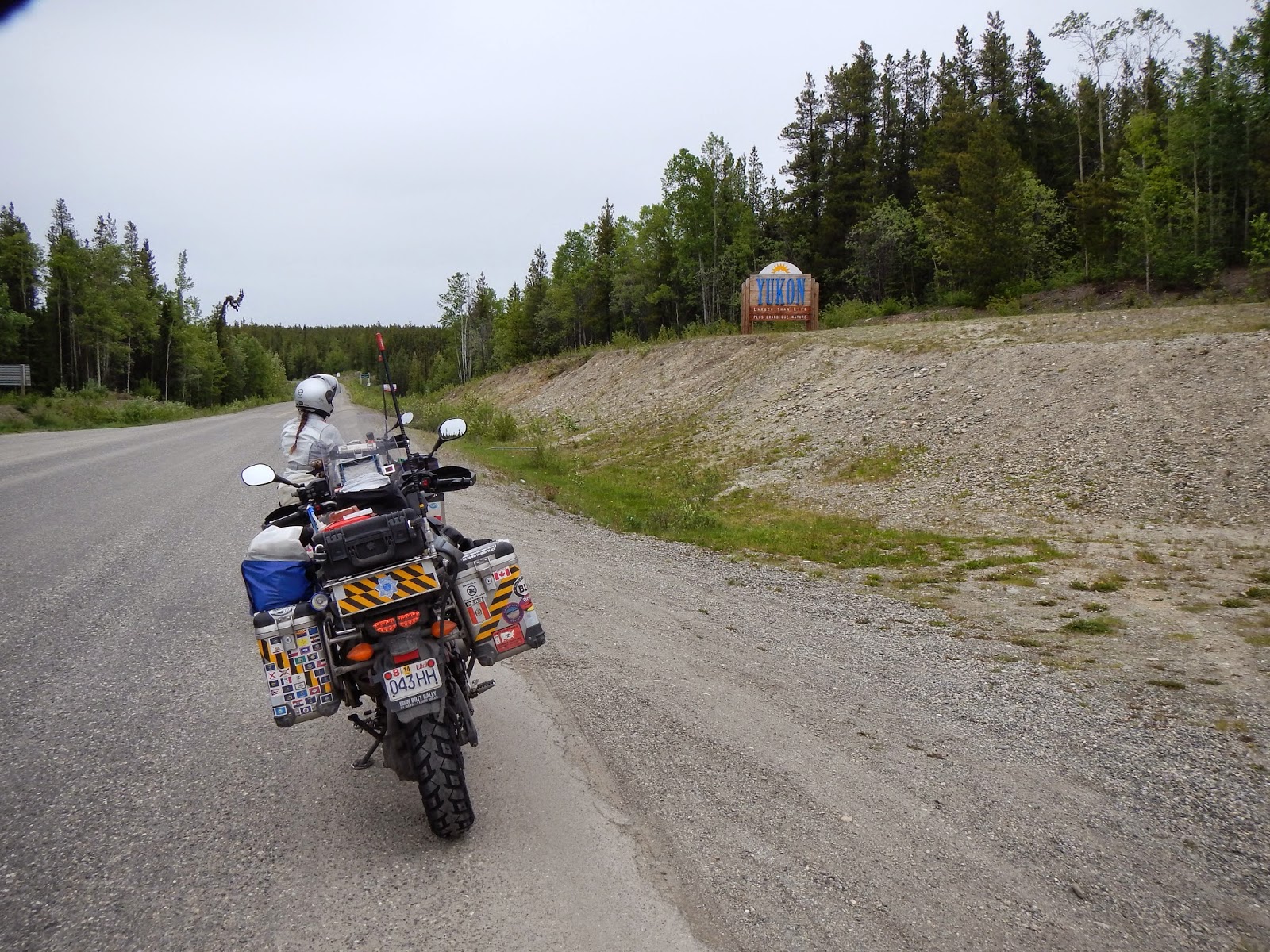 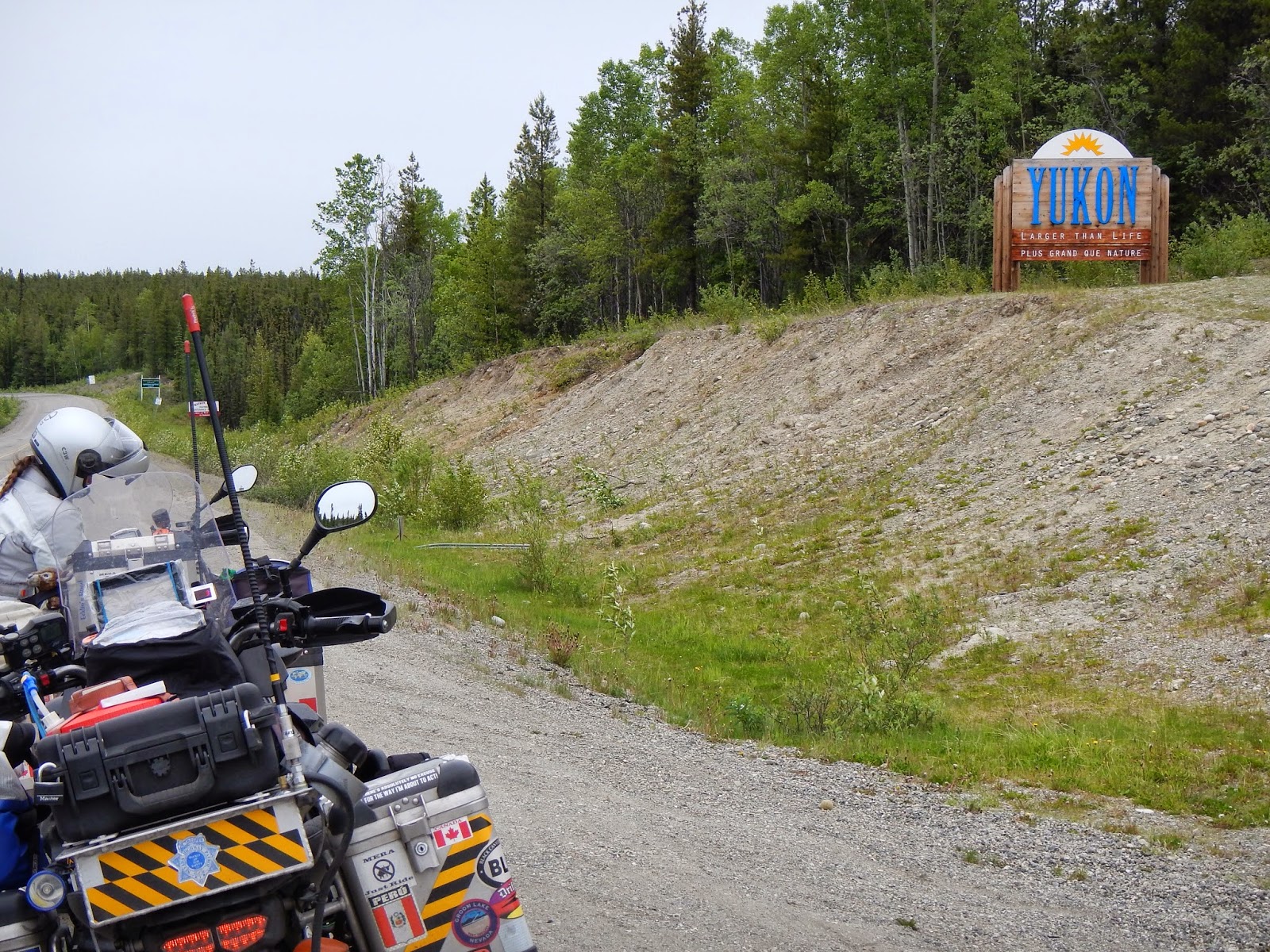 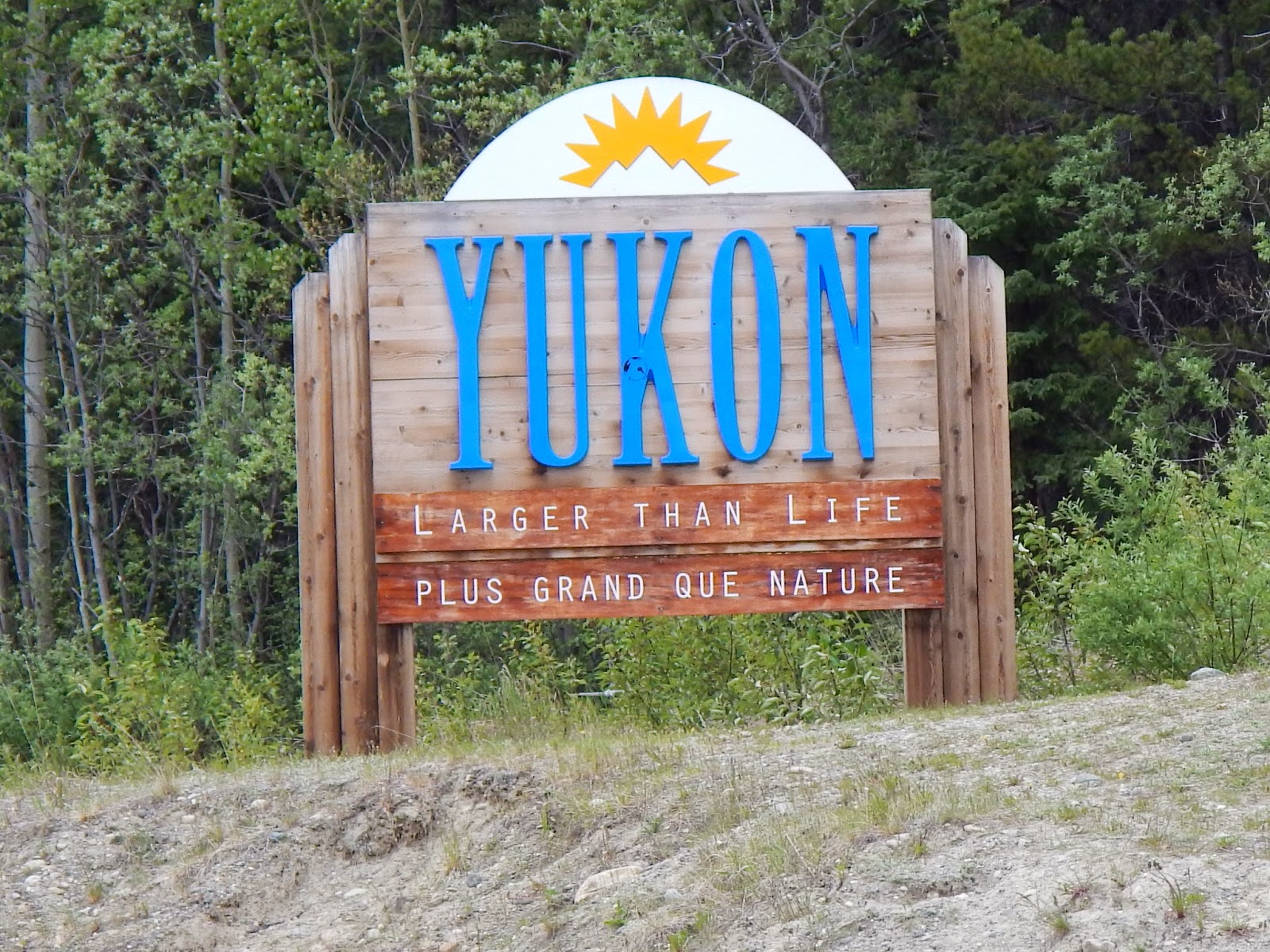 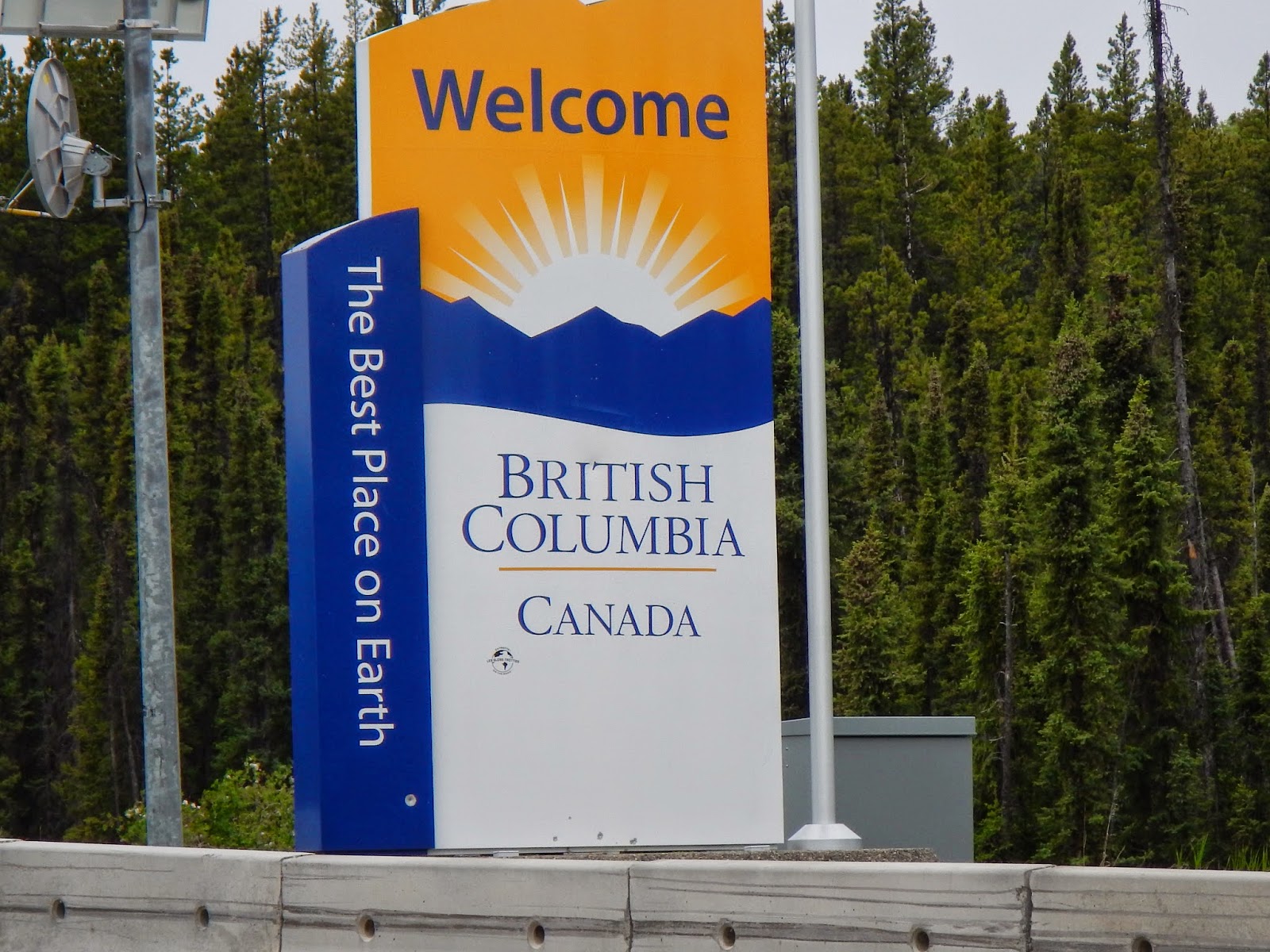 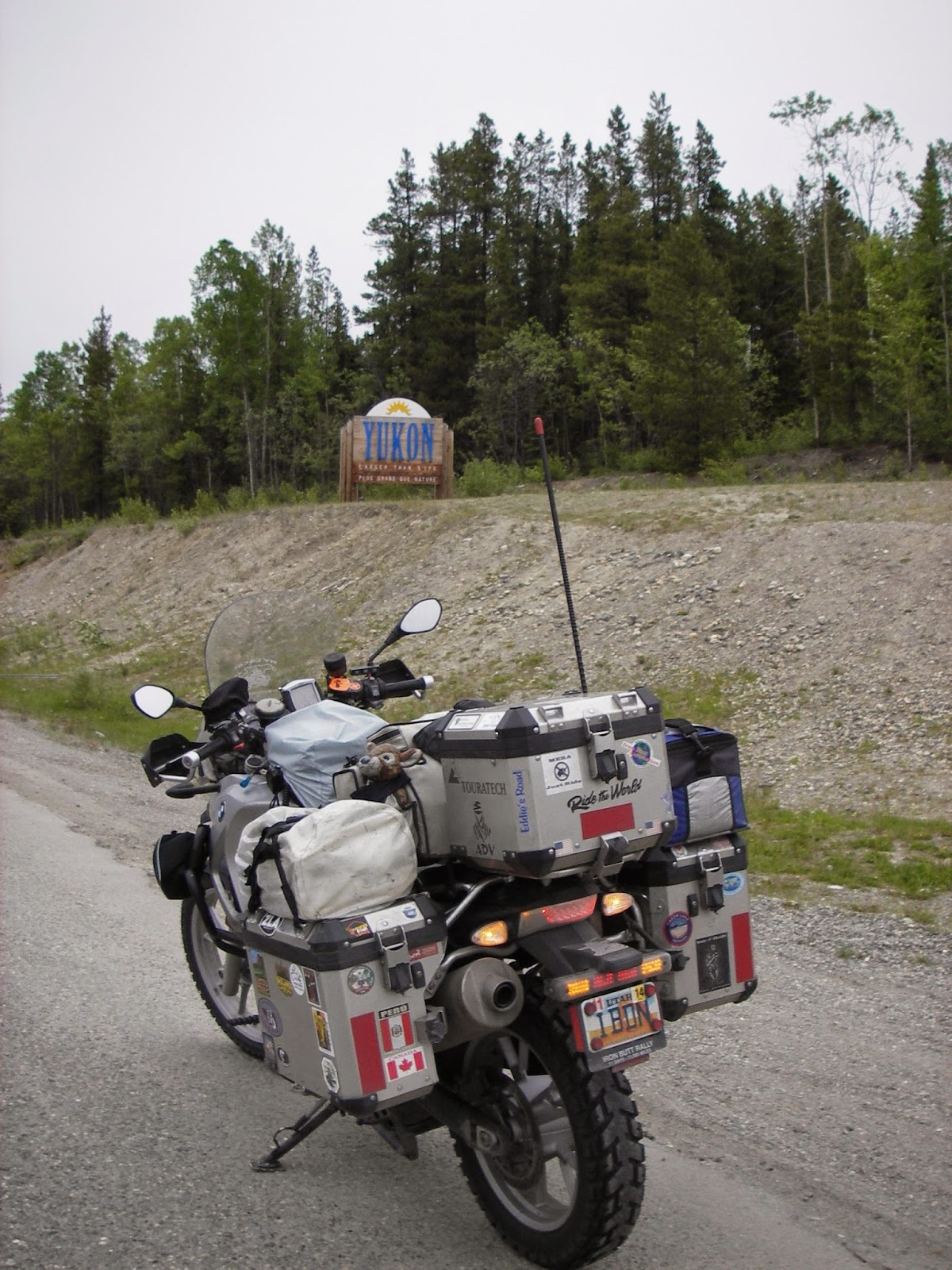 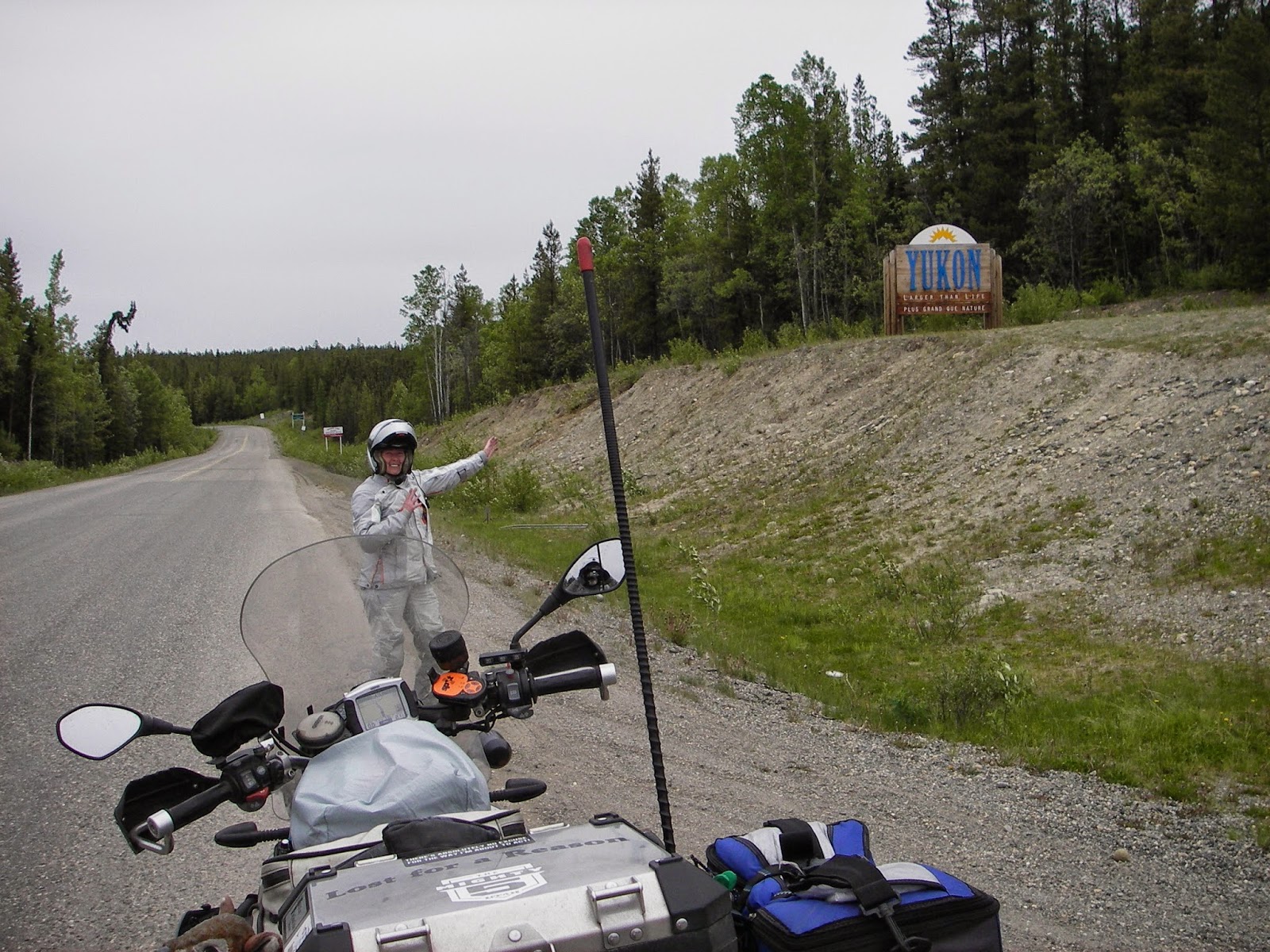 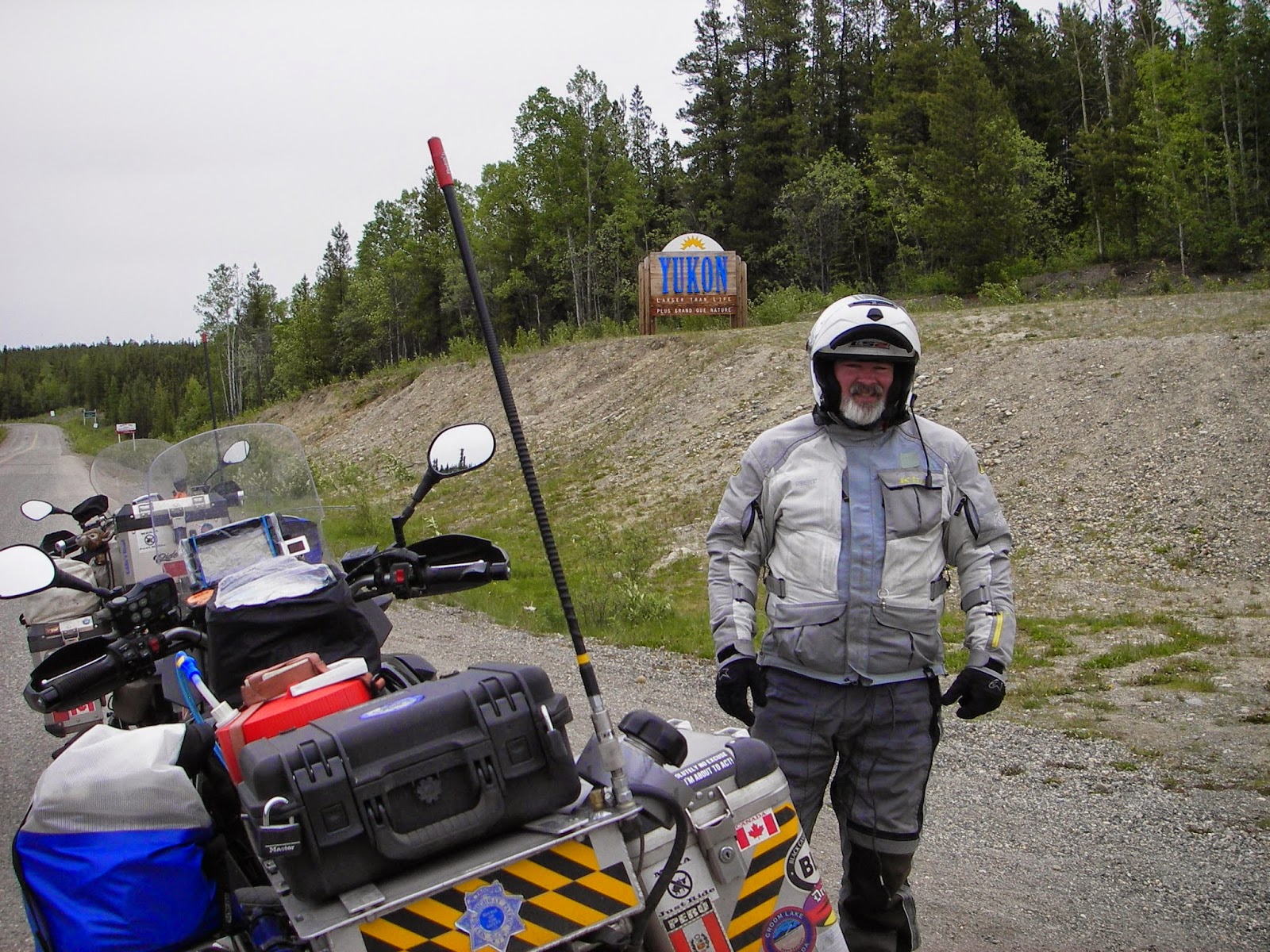 Oh my heck, we're almost to our hotel!!!

About a bazillion more miles and we finally got to our hotel. Yummy!  I'm so ready to end the day! 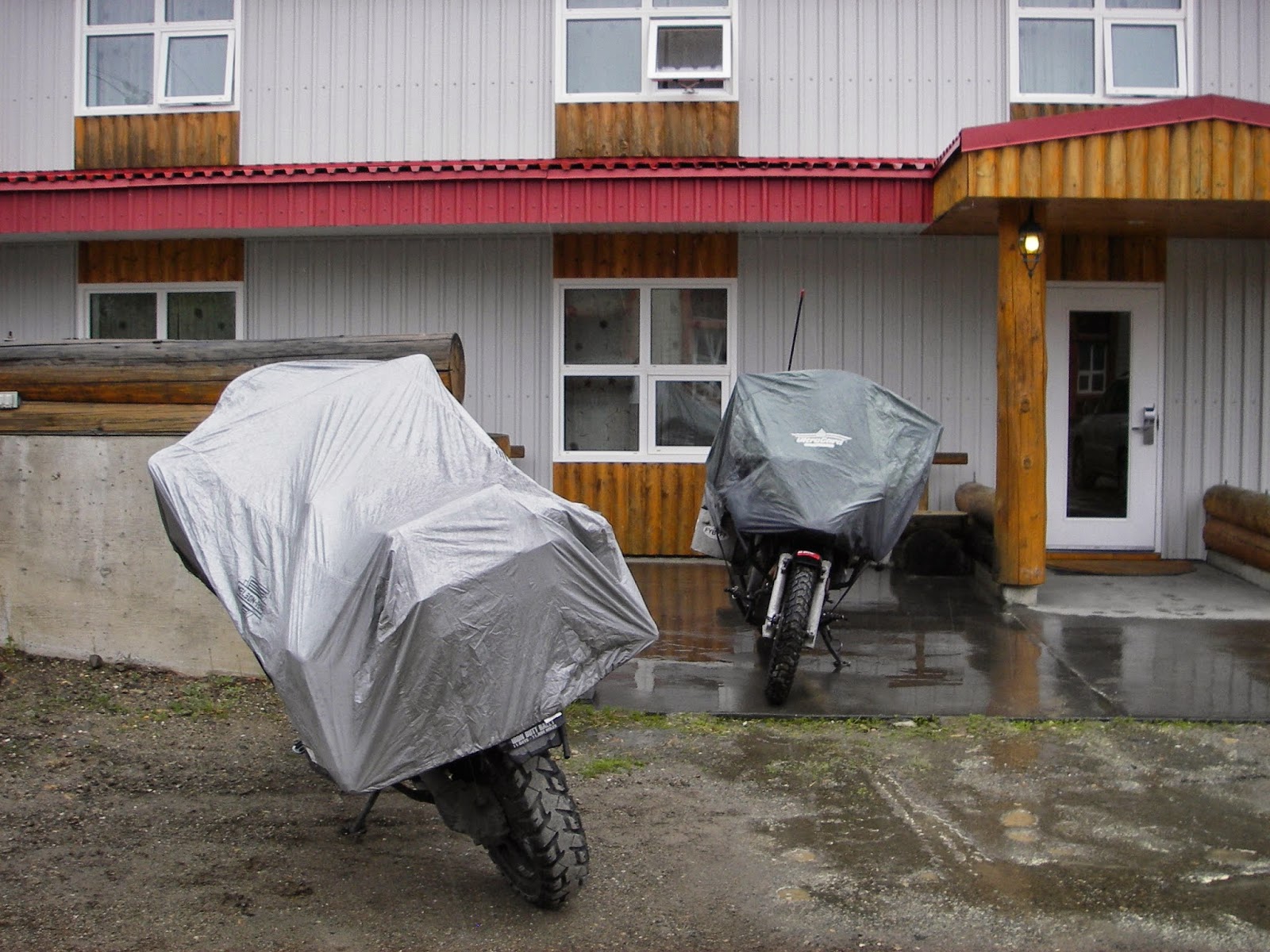 We stayed at "The Nice Motel" and although it doesn't look like much on the outside and you check in at the gas station, it was an awesome surprise.  A beautiful, well appointed and tastefully decorated room.  It even had a gas fireplace, small kitchenette and a yummy bed.  A real surprise and good thing, because we booked this motel for our return trip as well.

Very funny, as we tucked into bed, the sky began to lighten up.  Maybe tomorrow will be an awesome beautiful day with no rain.  We'll see.

Okay then, okie dokie then, hugs to you all!!!