We left Carmacks around 9 am because our day today is only a little over 200 miles.  But, before we left I had to take some pictures.  Without doubt, this is one of the worst places I've ever stayed and believe me, I've stayed in some pretty rank places (especially while on the Iron Butt Rally).  We rented a "cabin" but it was really a shack.  See here - 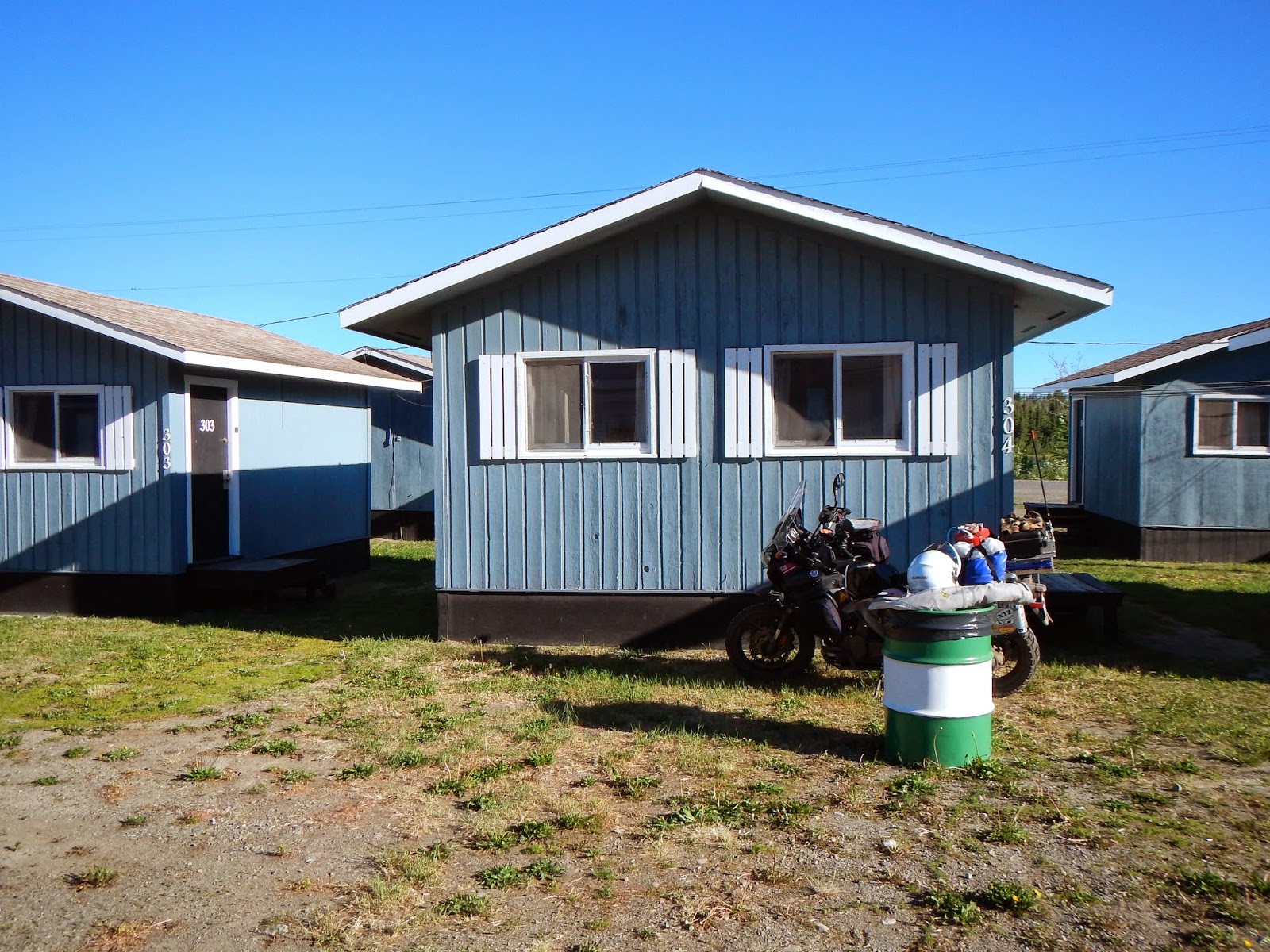 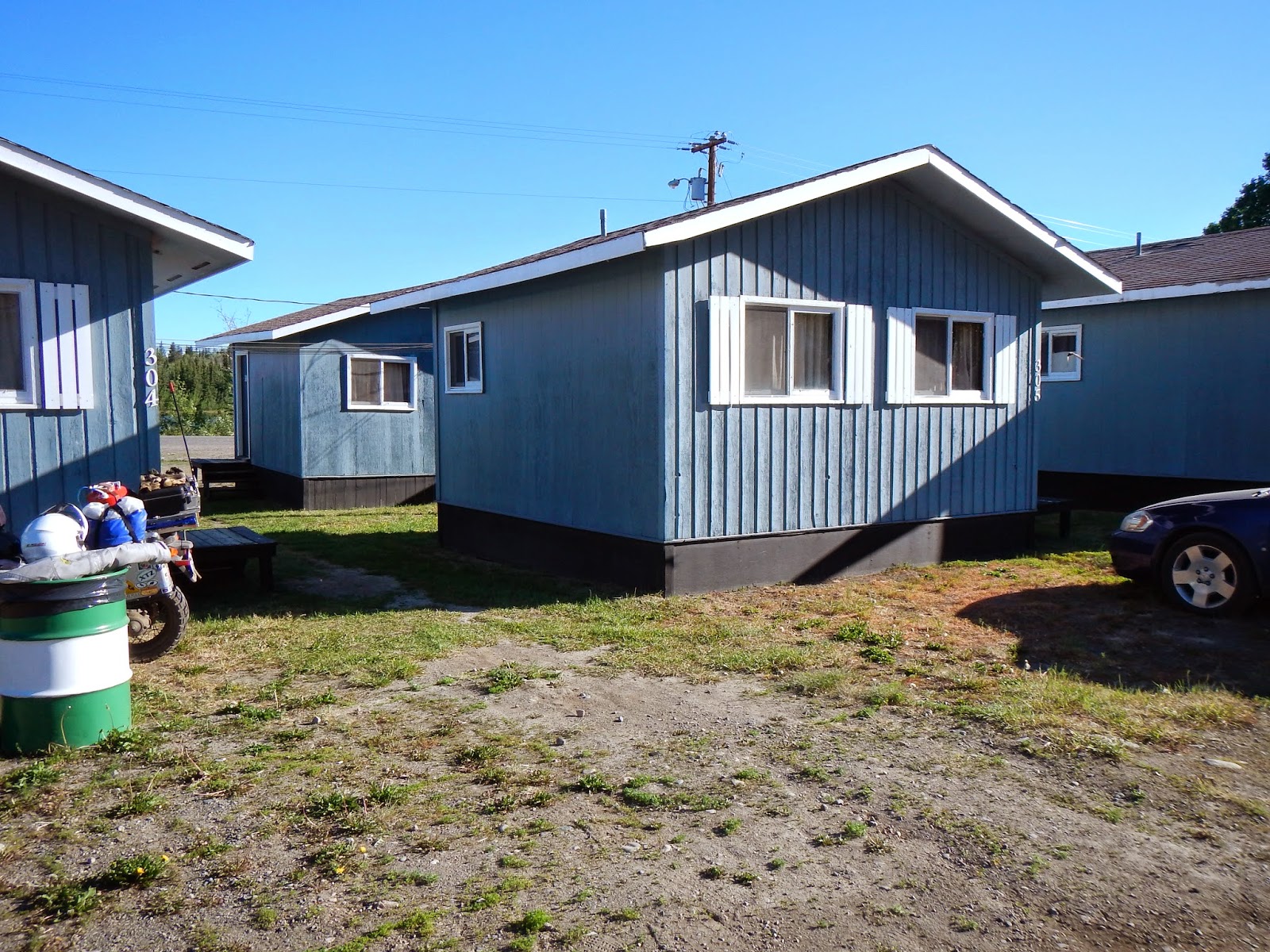 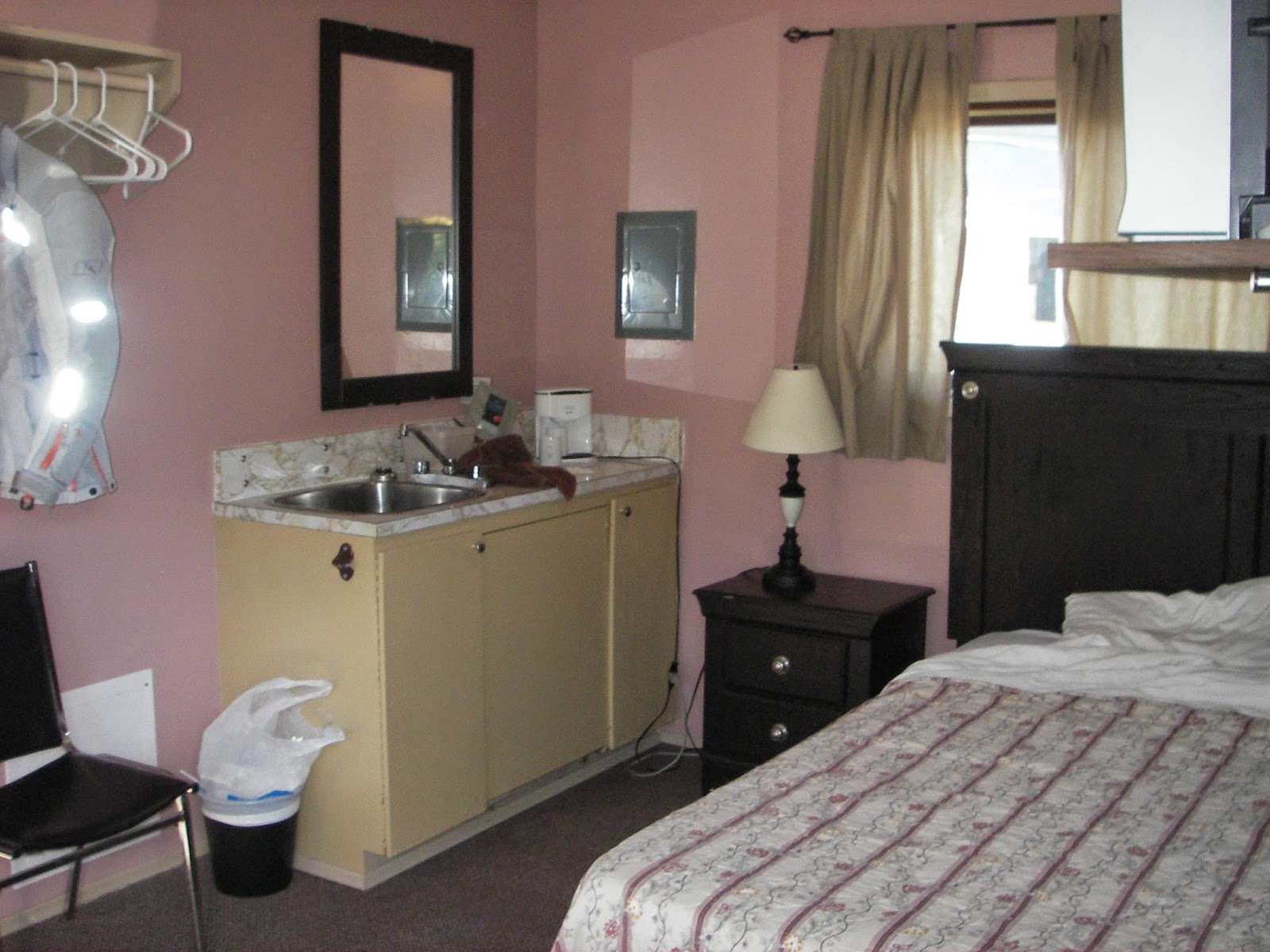 Note the bathroom sink propped up with a board!  Brown towels so you can't see the dirt and stains. 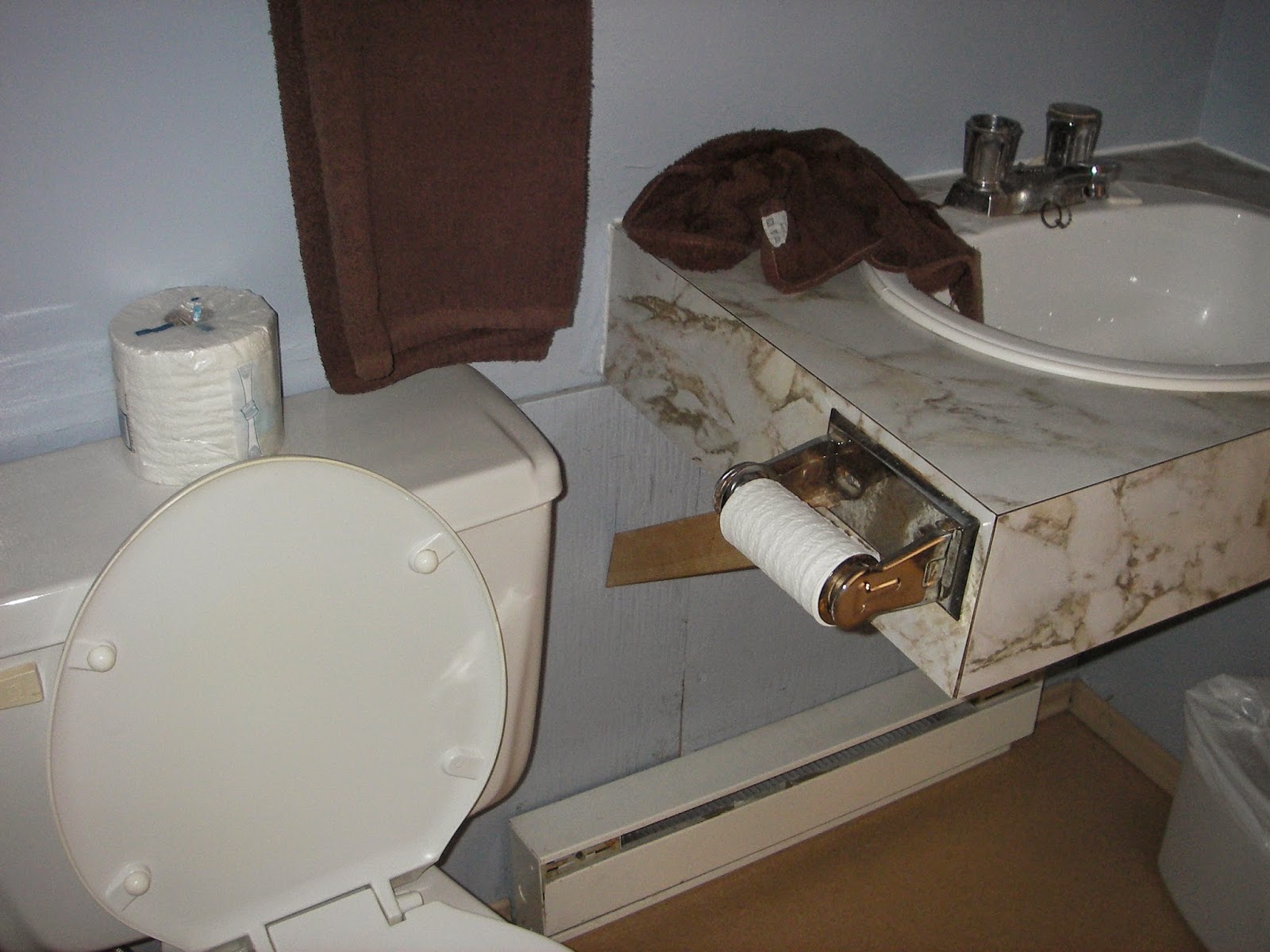 The water smelled sooooo bad it made me ill.  Heavy sulpher.  I couldn't take a shower and I used bottled water to brush my teeth.  The walls were so thin you could hear the neighbors.  Horrible night sleep.  Okay, that's now behind me :-)

We headed out on a sunny, beautiful morning thinking we would stop up the road for food.  Well, it turned to be quite a ways up the road, like 100 miles before we found a place to stop and eat! We did make a quick stop for fuel and back on the bikes.  The road was rough and we had to watch for frost heaves, potholes and bad patches.  But all in all, we made good time.  Probably averaging 60 - 65 mph.  Didn't see a single critter but for chipmonks and squirrels.

We stopped to eat at Moose Creek Lodge. 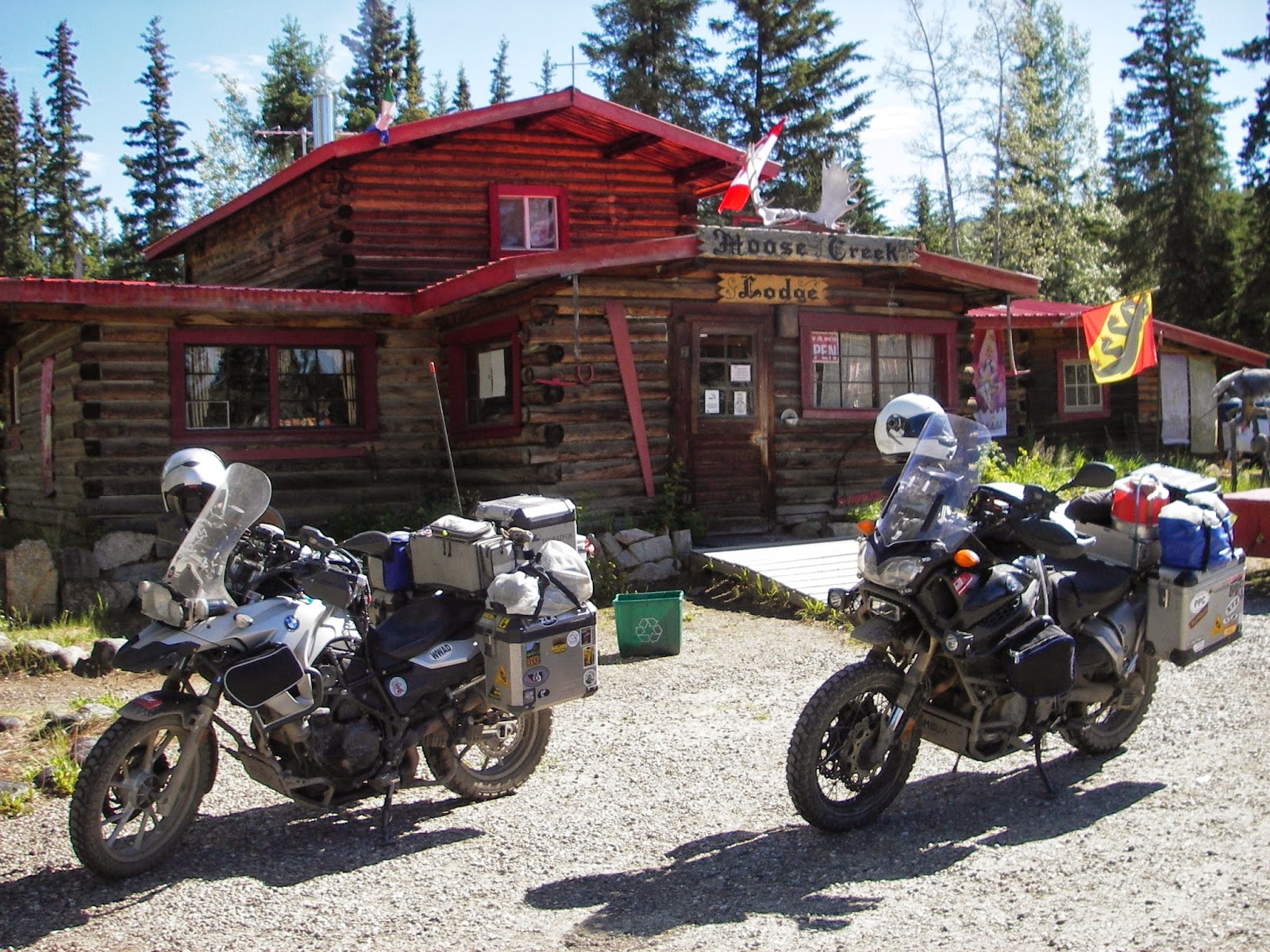 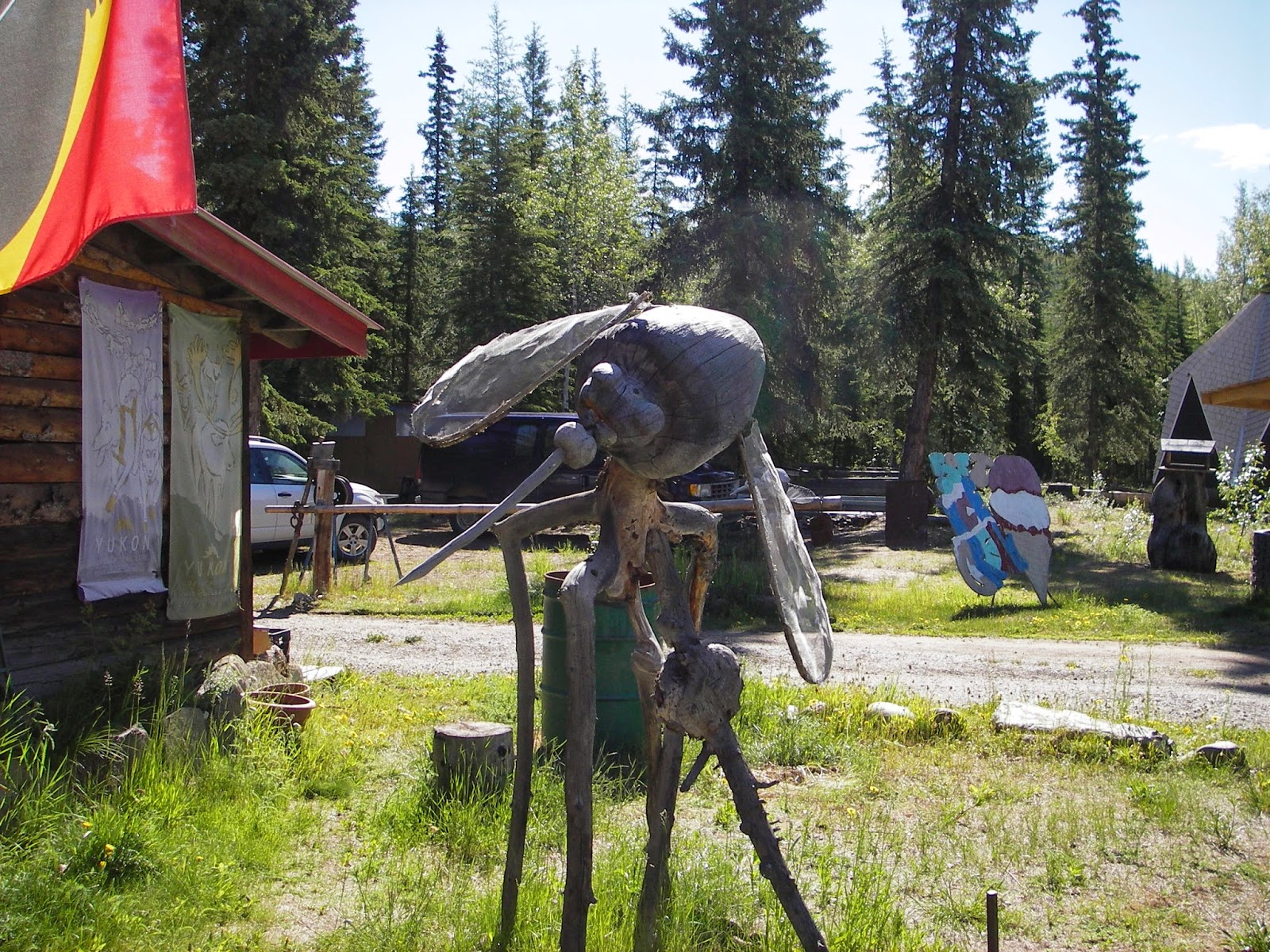 Although a little worse for wear, this is a wood sculpture of an average size mosquito!
We had a fantastic meal here.  The bread was all homemade and the eggs fresh from the chickens running around the yard.  Very charming and delicious.  We also purchased a few post cards and some Yukon stickers.  Really nice folks too!  This was a fun stop.

Back on the bikes we only had another 100 miles to go to reach our goal of Dawson City.  We got a LOT of practice swerving at speed to avoid potholes.  The weather stayed fairly nice with only one small rain shower.  It is so nice to have great gear and I don't have to even think about the weather.  Just ride on, no stopping to put on rain gear, etc. 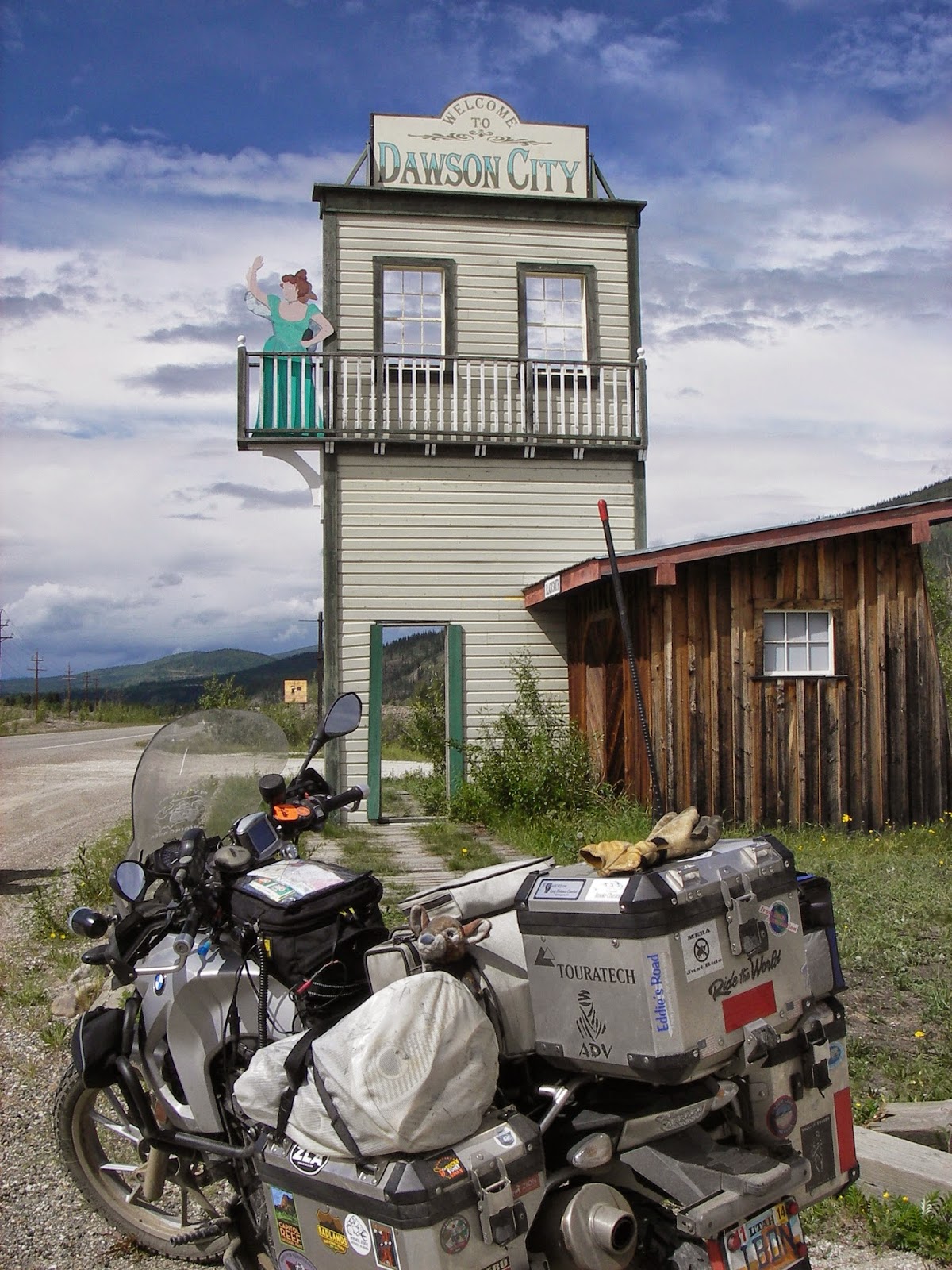 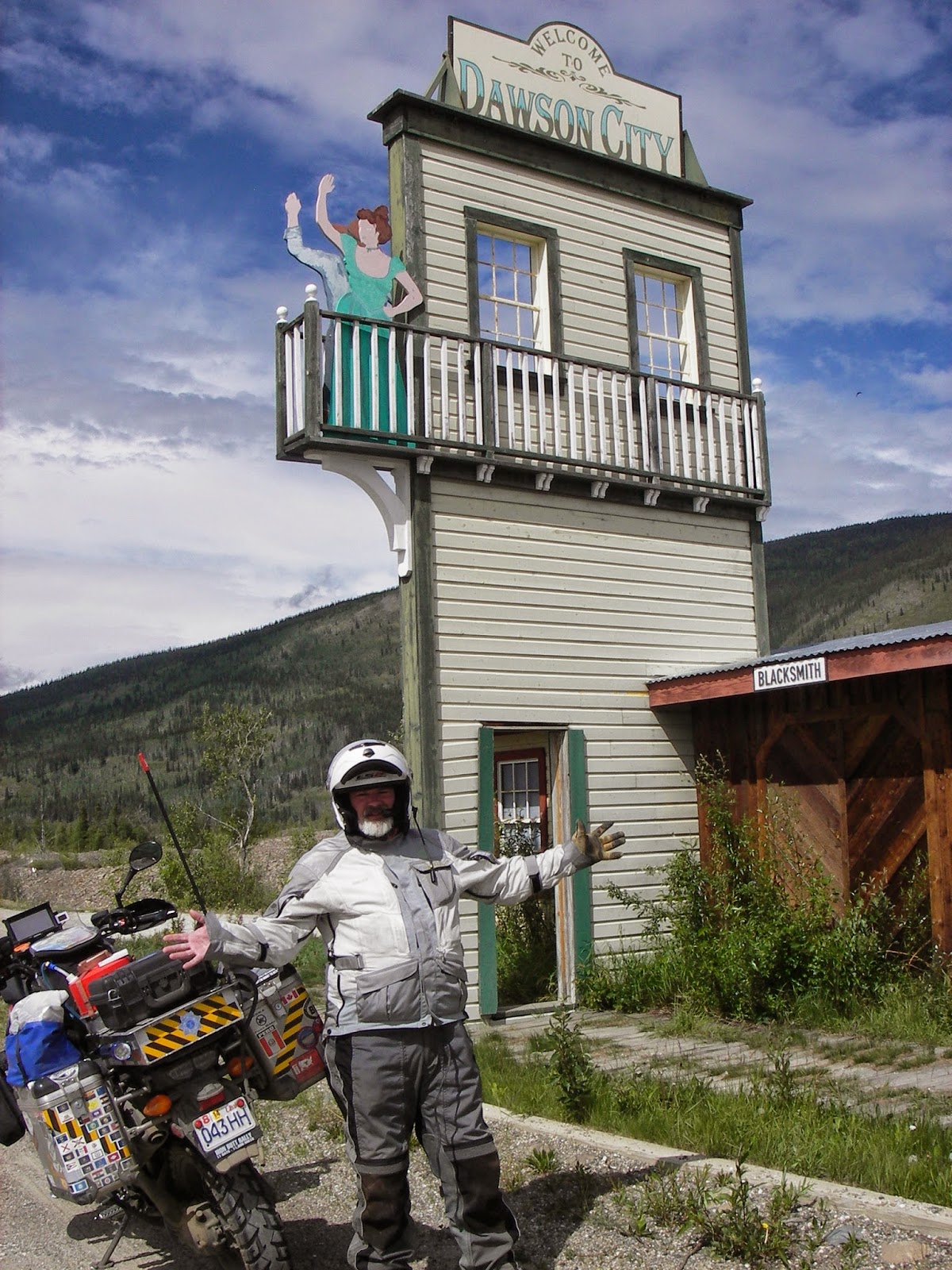 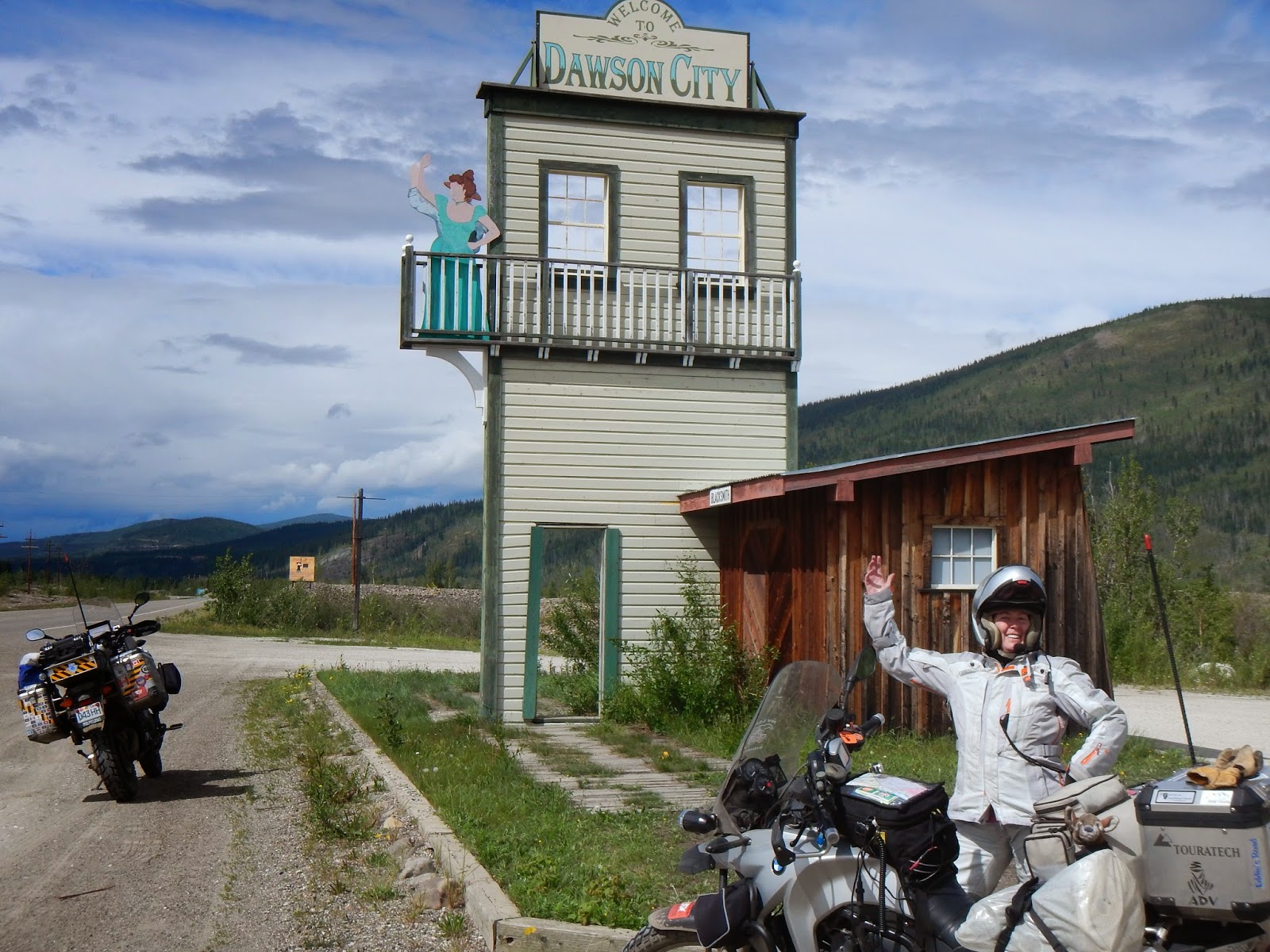 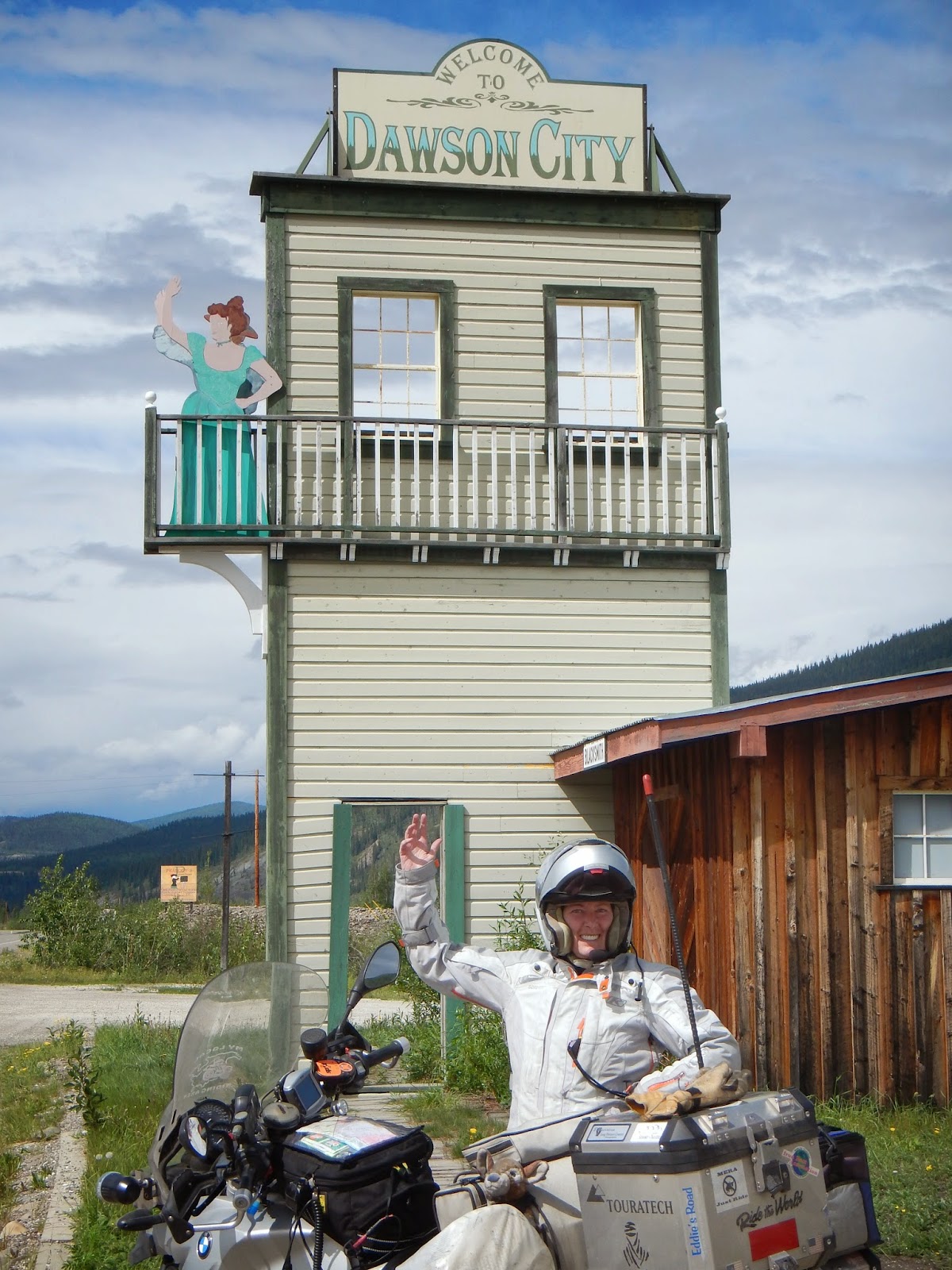 We passed a boatload of huge rock piles and then I realized those were mining tailings.  They are everywhere.  Huge mountains of big rock piles.  I later found out that the tailings were from the original Gold Rush days.

We rolled into Dawson City about 2 pm and located our hotel, the Tripe J.  We parked out front and immediately began talking with a couple of other folks on bikes.  Finally, we decided to get checked in.  We were directed to our cabin and this time, it really was a cabin, not a shack!  It is very pleasant with a kitchenette and a nice porch with two chairs.  Our cabin faces the parking lot where all the action is taking place.  It was fun to sit on the porch with our cocktails watching folks arrive. 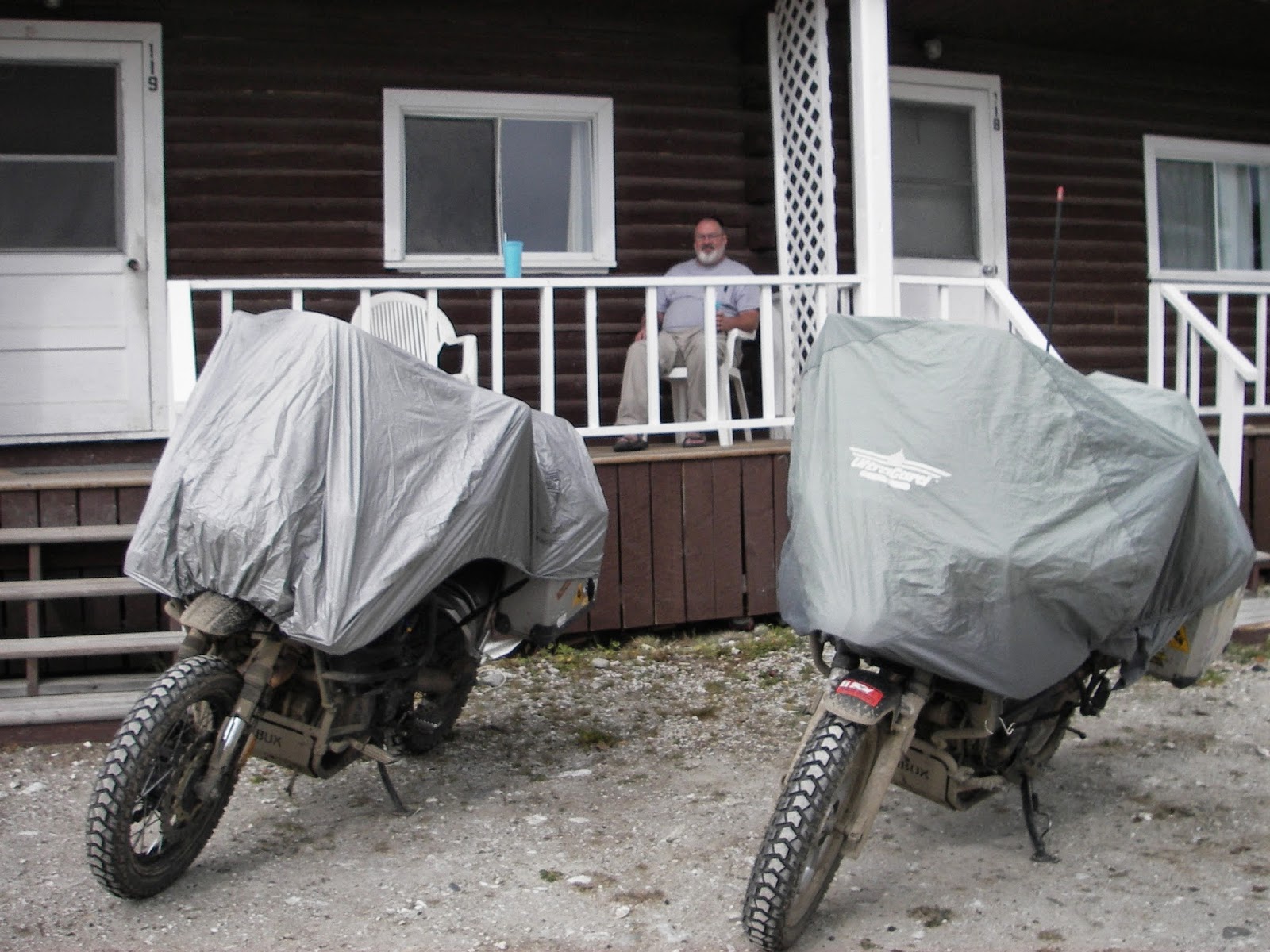 I took a few photos of bikes in the parking lot. 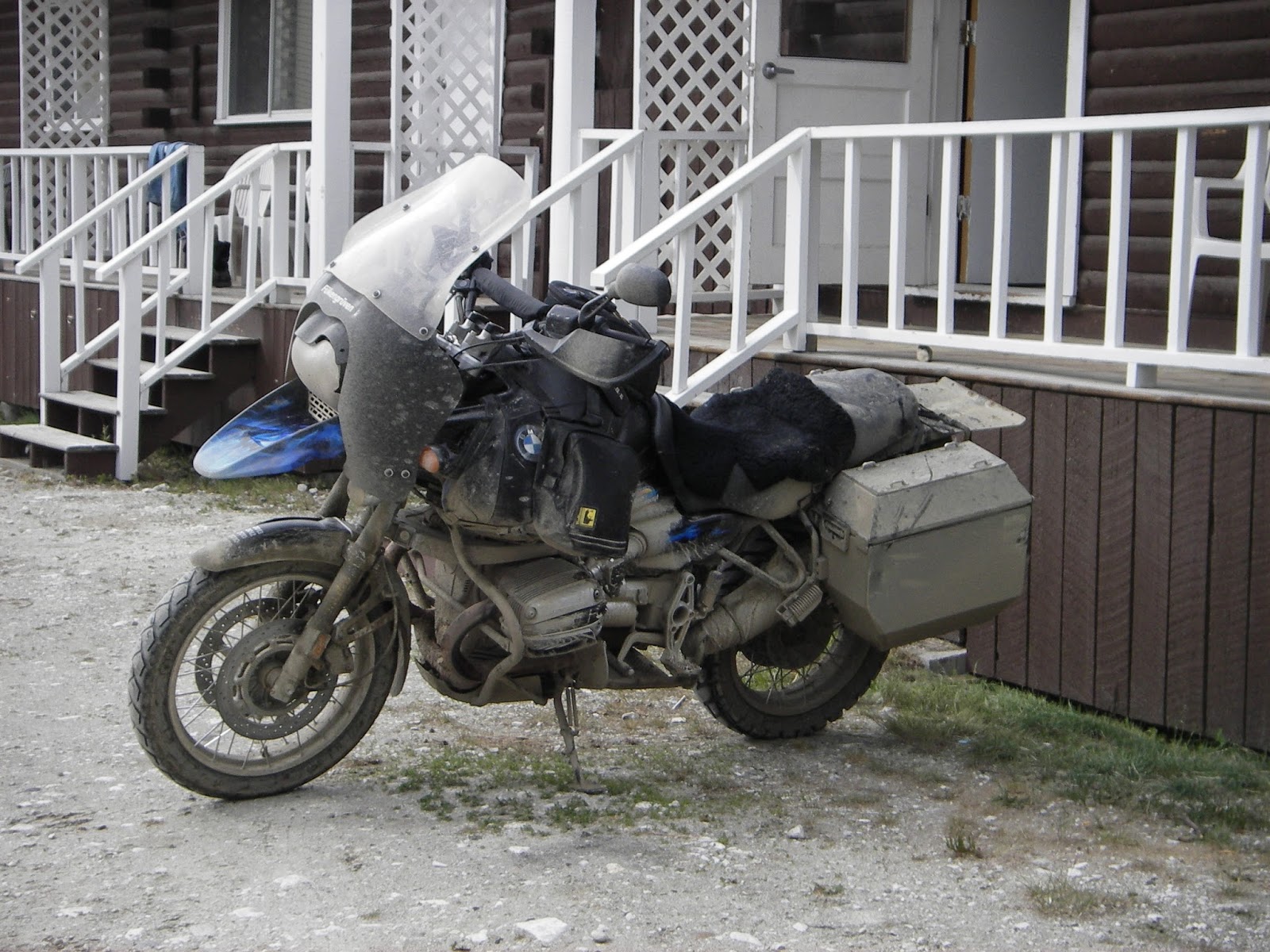 A large number of folks had come over the Top of the World Hiway and their bikes were covered in mud.  Apparently, some rain and snow had made the ToW Hiway a snotty, slippery, muddy mess.  A bunch of riders stopped in Chicken, AK and waited quite a while before attempting the ride over.  I guess they all made it.  I heard several folks dumped their bikes but I don't think anyone was injured.  Just part of the adventure.  Update - just heard a man and his wife on a GSA biffed pretty bad on the ToW hiway.  She has a broken arm and he had a concussion.  Bike just has cosmetic damage.  Fortunately, the folks here at D2D are on top of things and went and collected them and the bike. Good folks here!

The hotel has a bike wash station and plenty of riders were taking advantage of it after their muddy ride in. 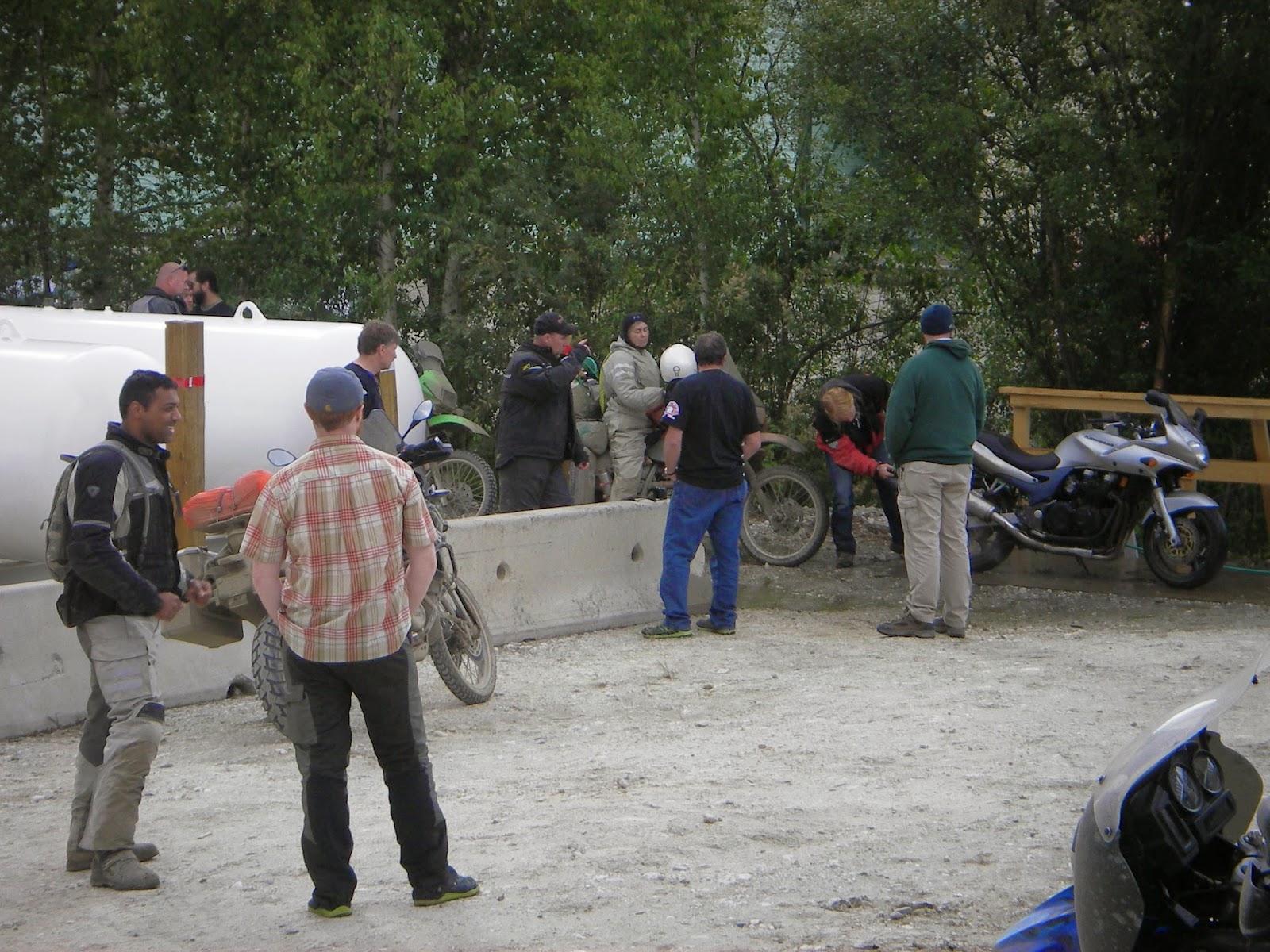 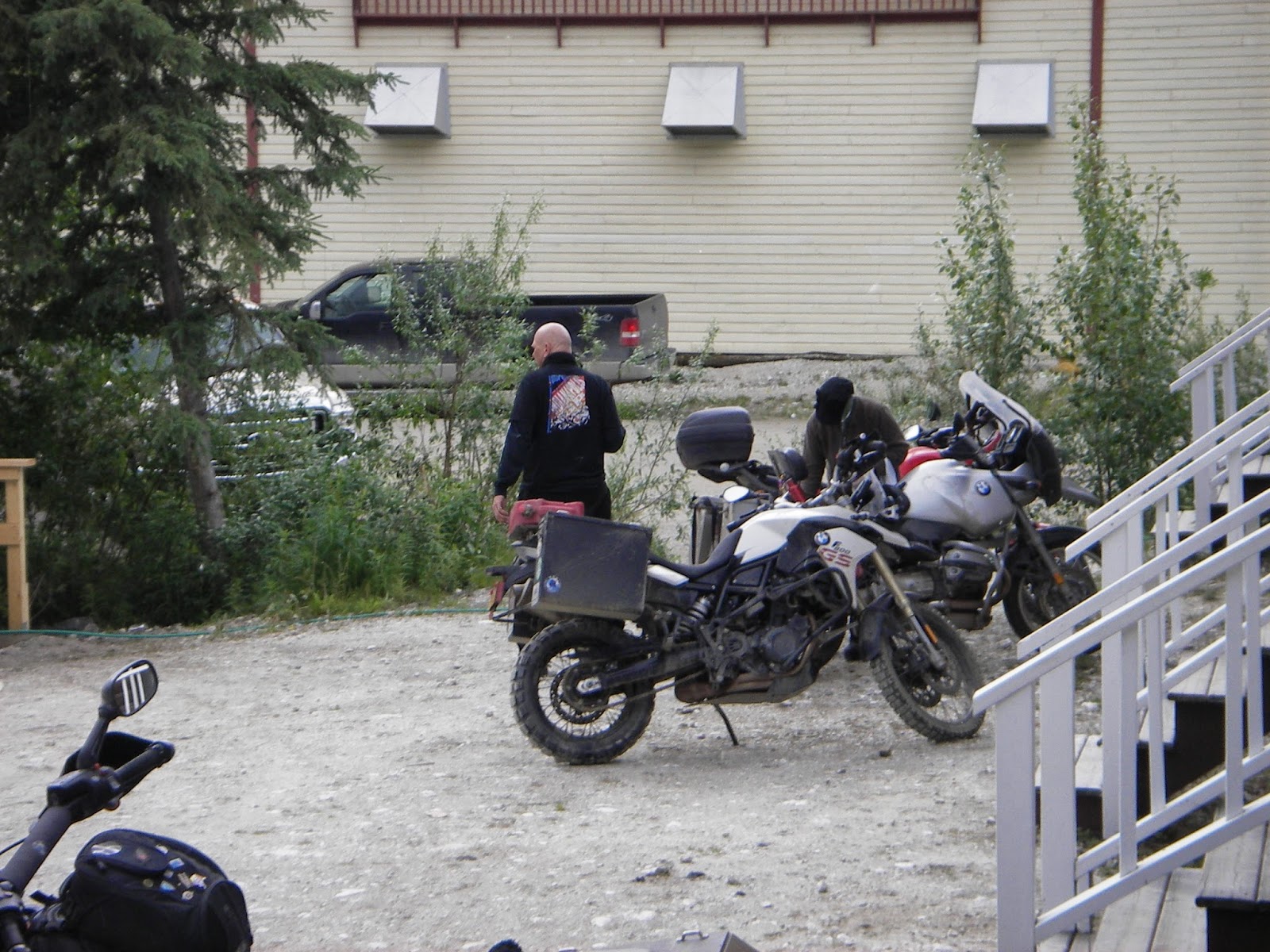 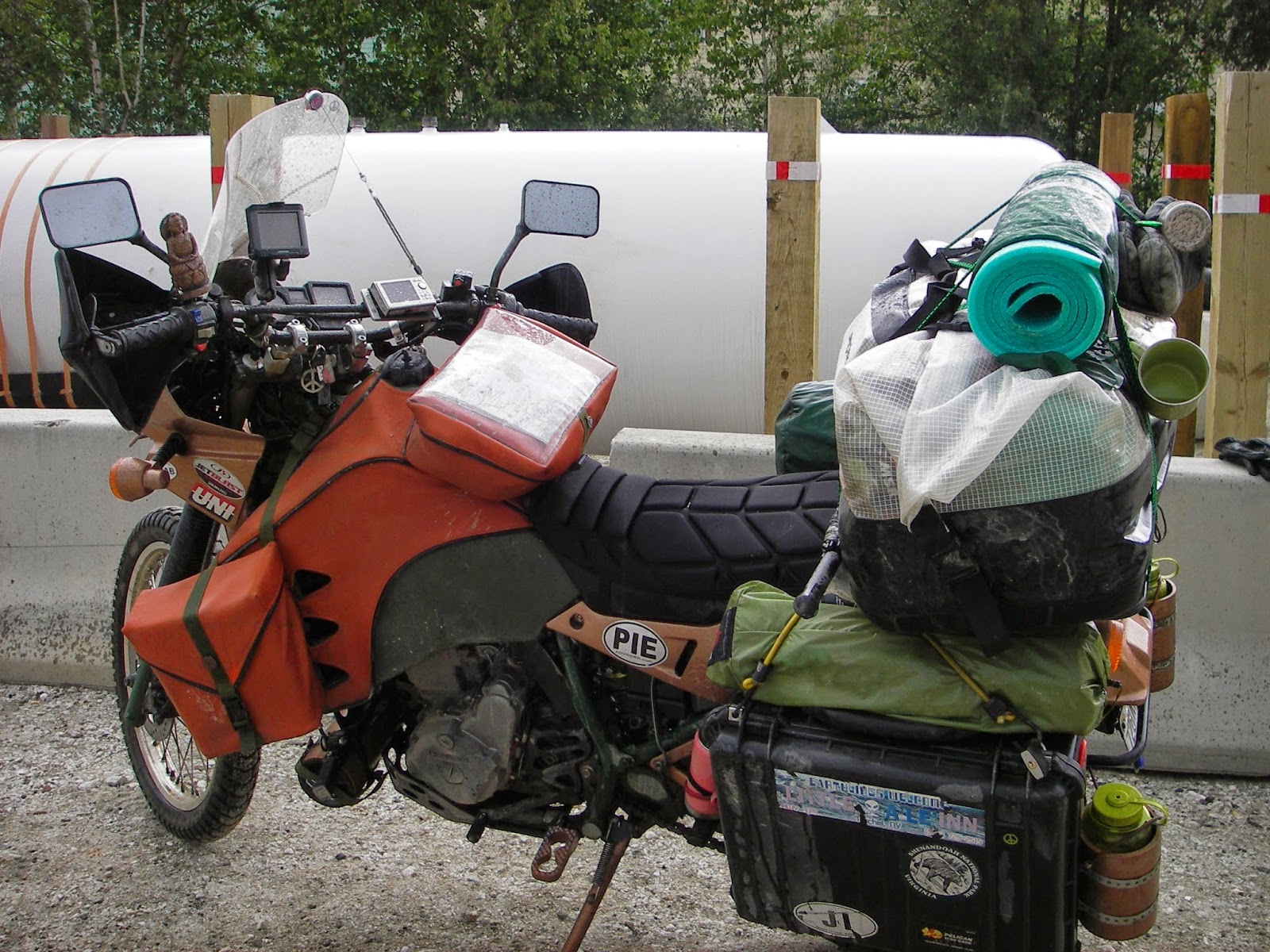 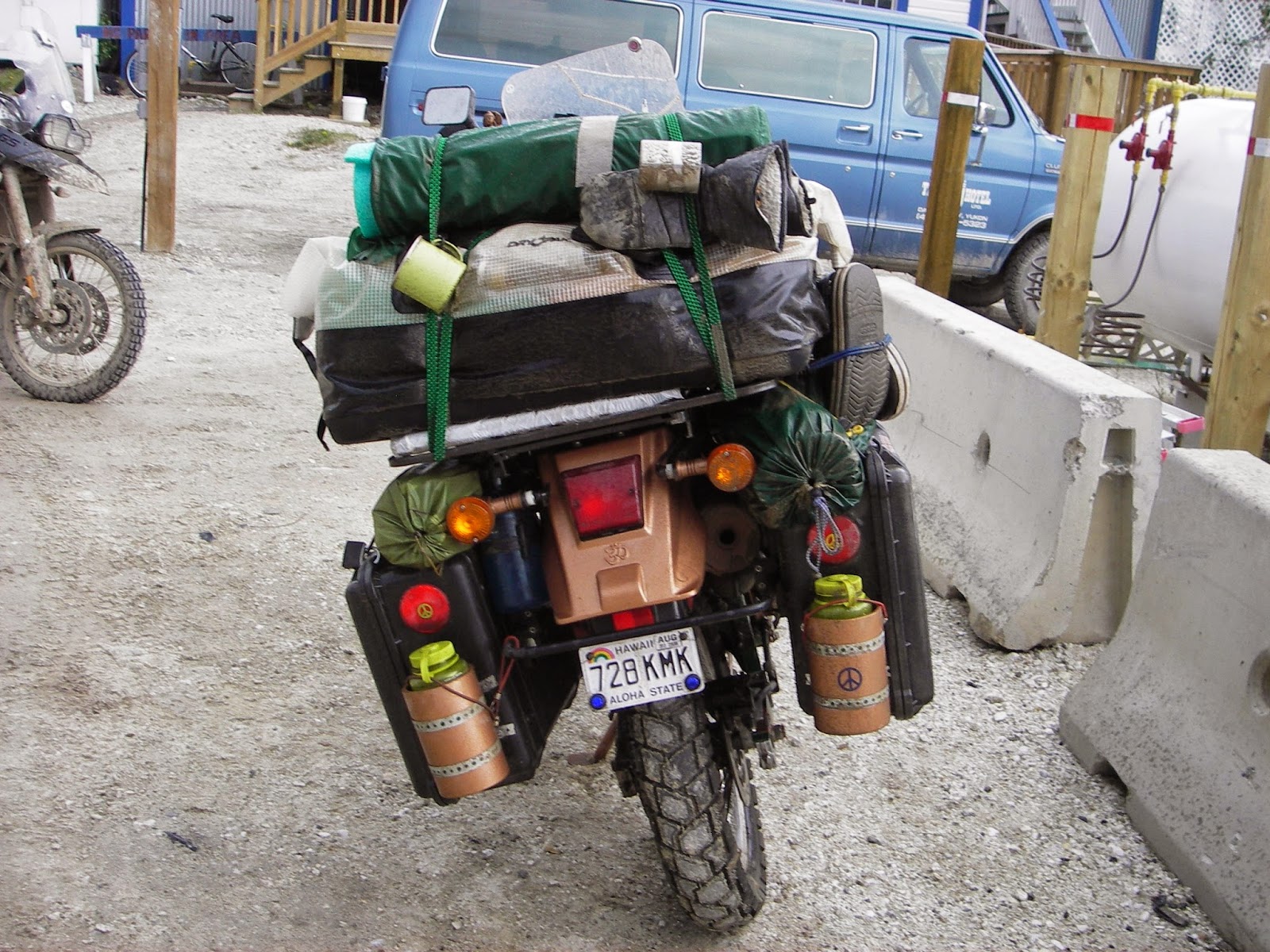 So, after all the talk of the ToW Hiway and how treacherous it was today, I'm freaking out!!!  I'm praying for dry and sunny the next couple of days.  Keep your fingers crossed for me because the alternative is to ride over 750 miles the long way and I really don't want to do that!

It rained here in Dawson City this afternoon and the streets turned to mud.  We're going to spend tomorrow being tourists and check out all the historic sites around town.  There is a poker run tomorrow but we're not participating.  In the evening they will have bike games like slow races, slaloms, bucket ball, bite the weenie, etc. and we will have fun with that.  Also a banquet with a raffle drawing and at midnight, all the bikes gather in front for a group photo and a Dust 2 Dawson Sticker!!!!

Looking forward to the fun tomorrow.