Before leaving our lovely cabin in the woods at Tok, we had a great breakfast provided by the Caribou Cabins.  This was an utterly delightful place to stay.  The cabin was cozy, the surroundings peaceful and the hosts wonderful.  I would stay here again in a heartbeat! 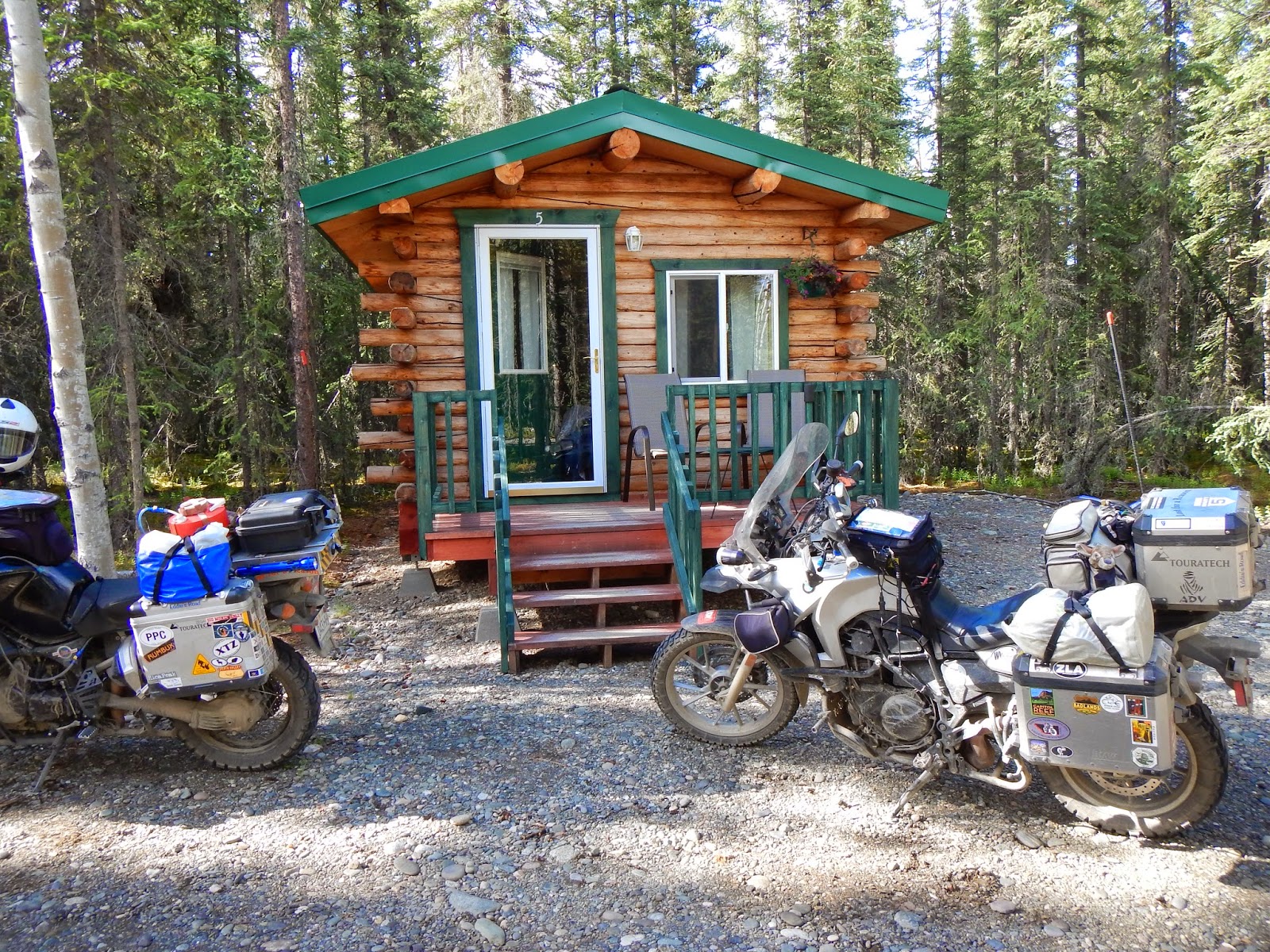 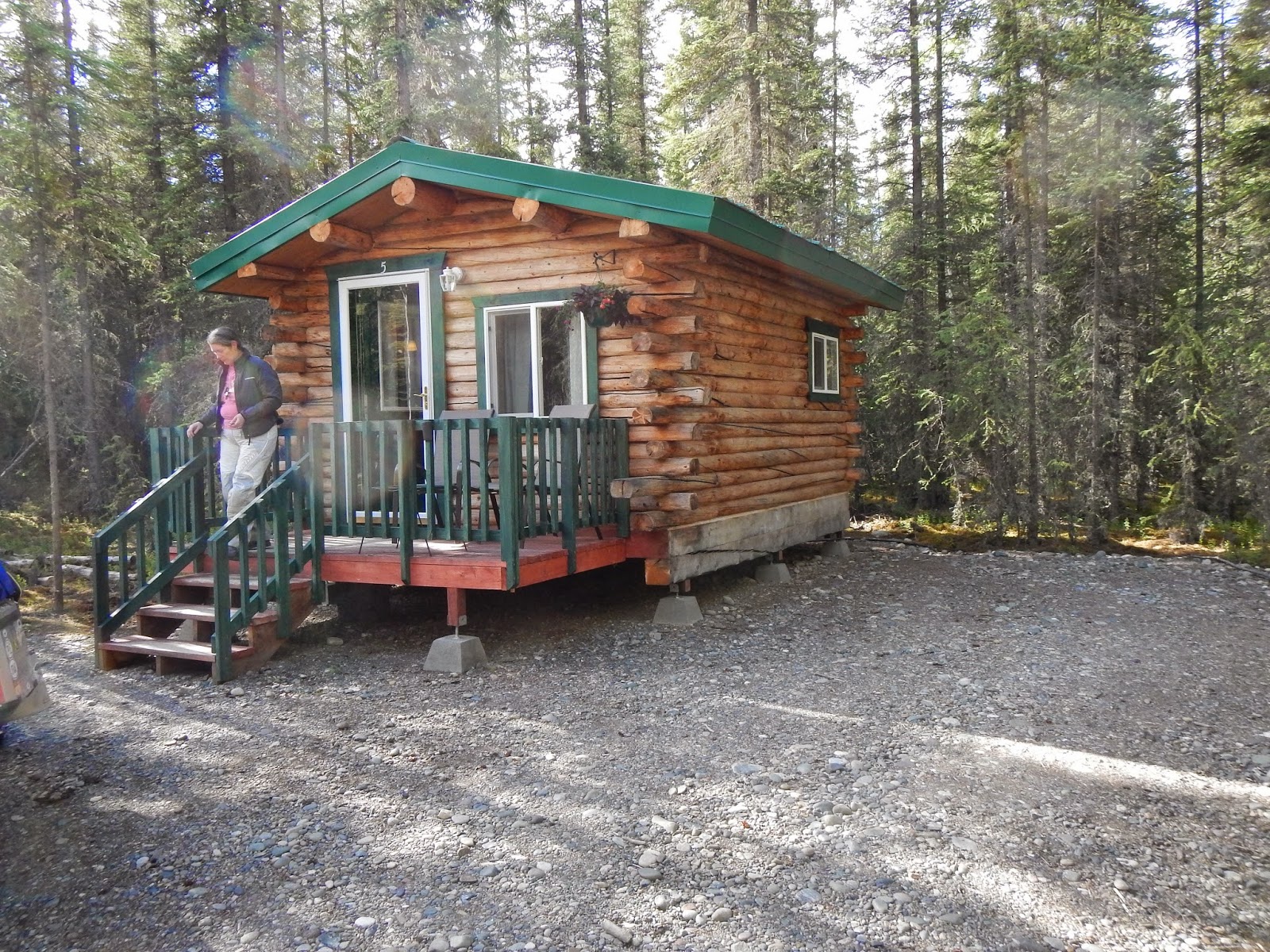 We took our time as we only had about 350 miles to ride today.  The sky was blue and clear.  Joy!!!  We finally departed around 9 am and headed toward Fairbanks.  The ride was uneventful but the scenery was lovely and traffic was very light.  We made good time and made several rest stops.   At one rest stop, the air was full and I mean full of fluff dancing on the wind.  It almost looked like snow.  These trees were the culprit.  Man that stuff was thick! 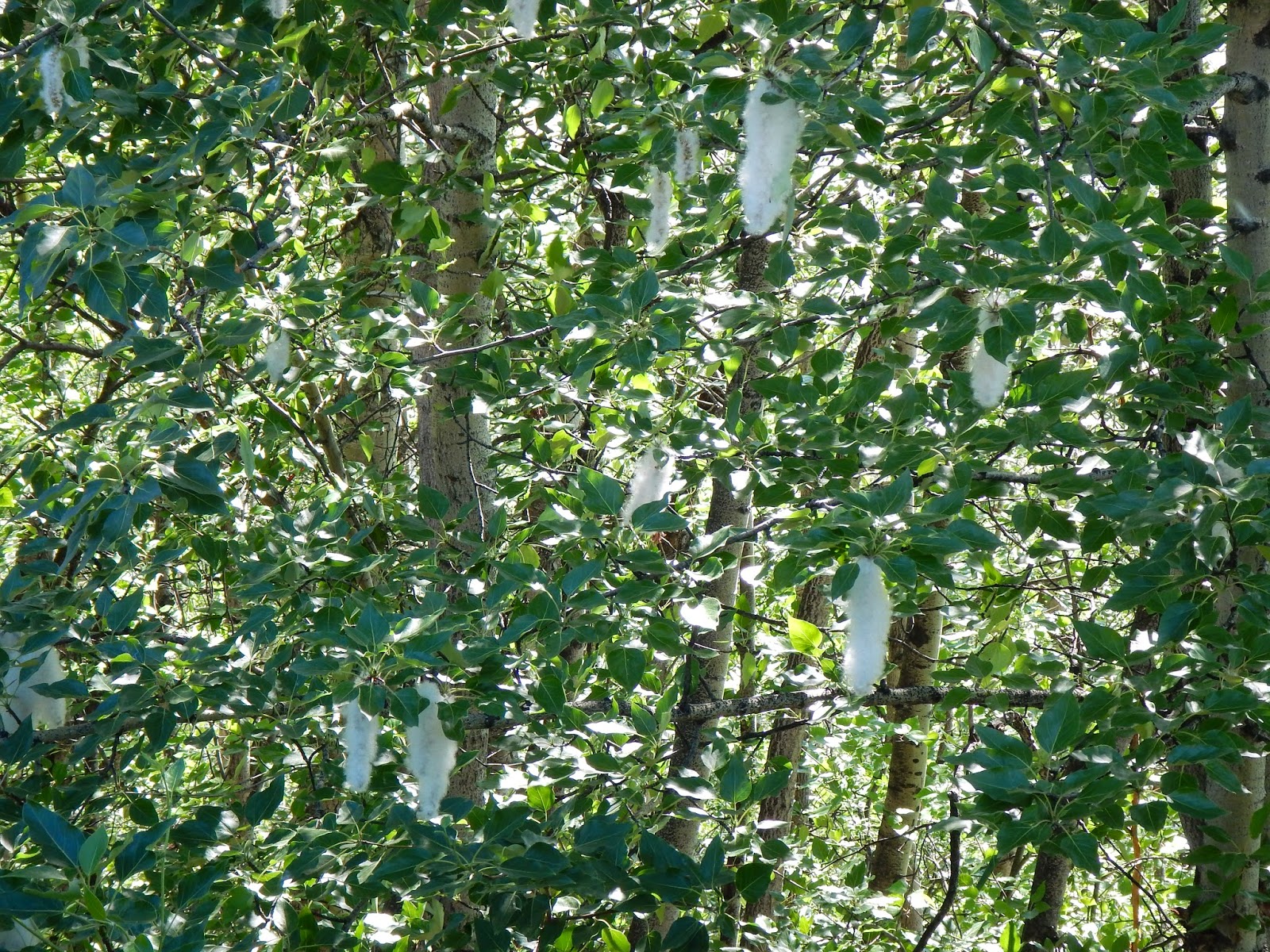 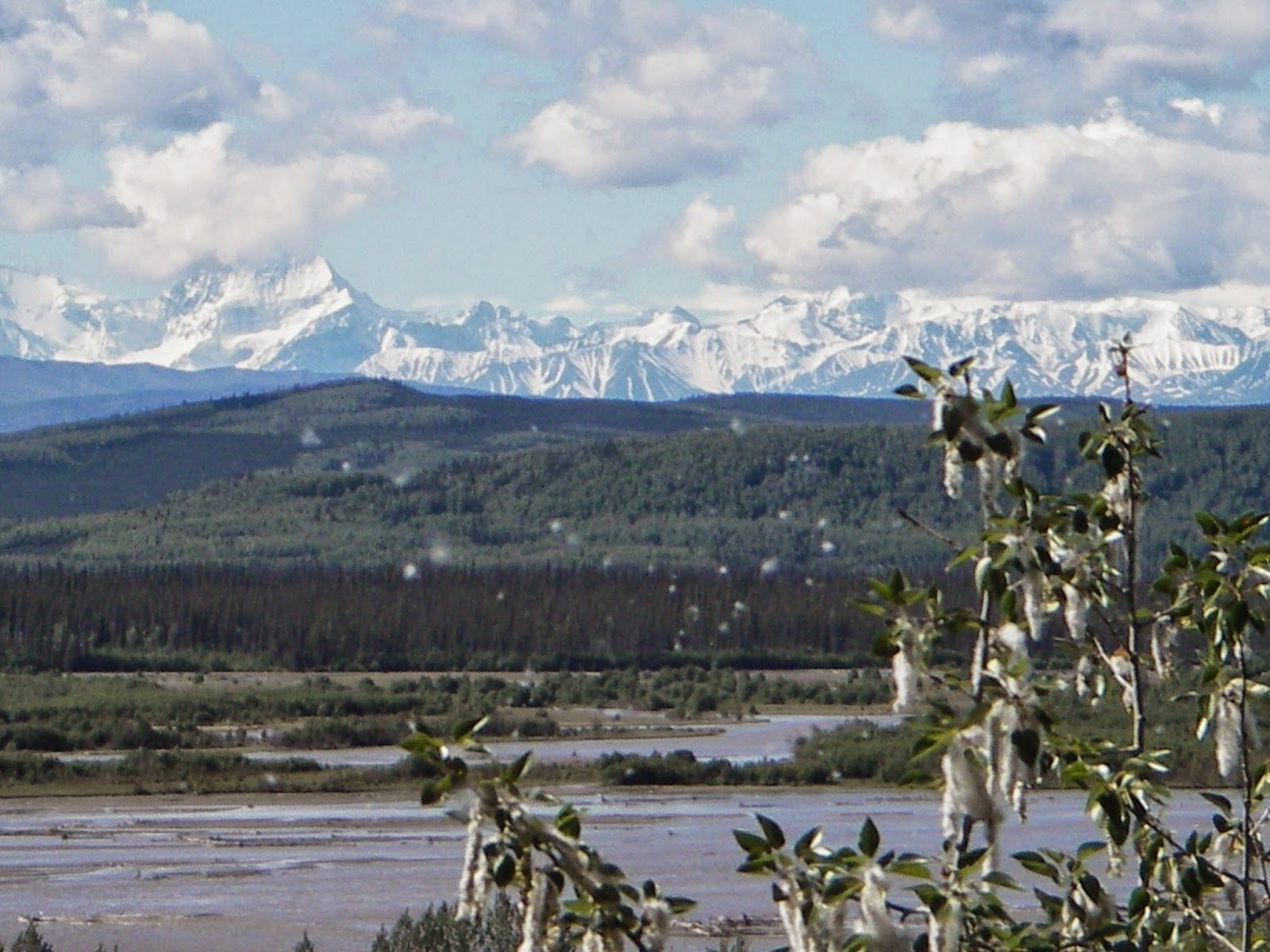 You couldn't hardly take a breath without the fluff filling your nose!

We motored on a very nice stretch of road.  The pavement was smooth, traffic light to non-existent and all was good in the world :-) 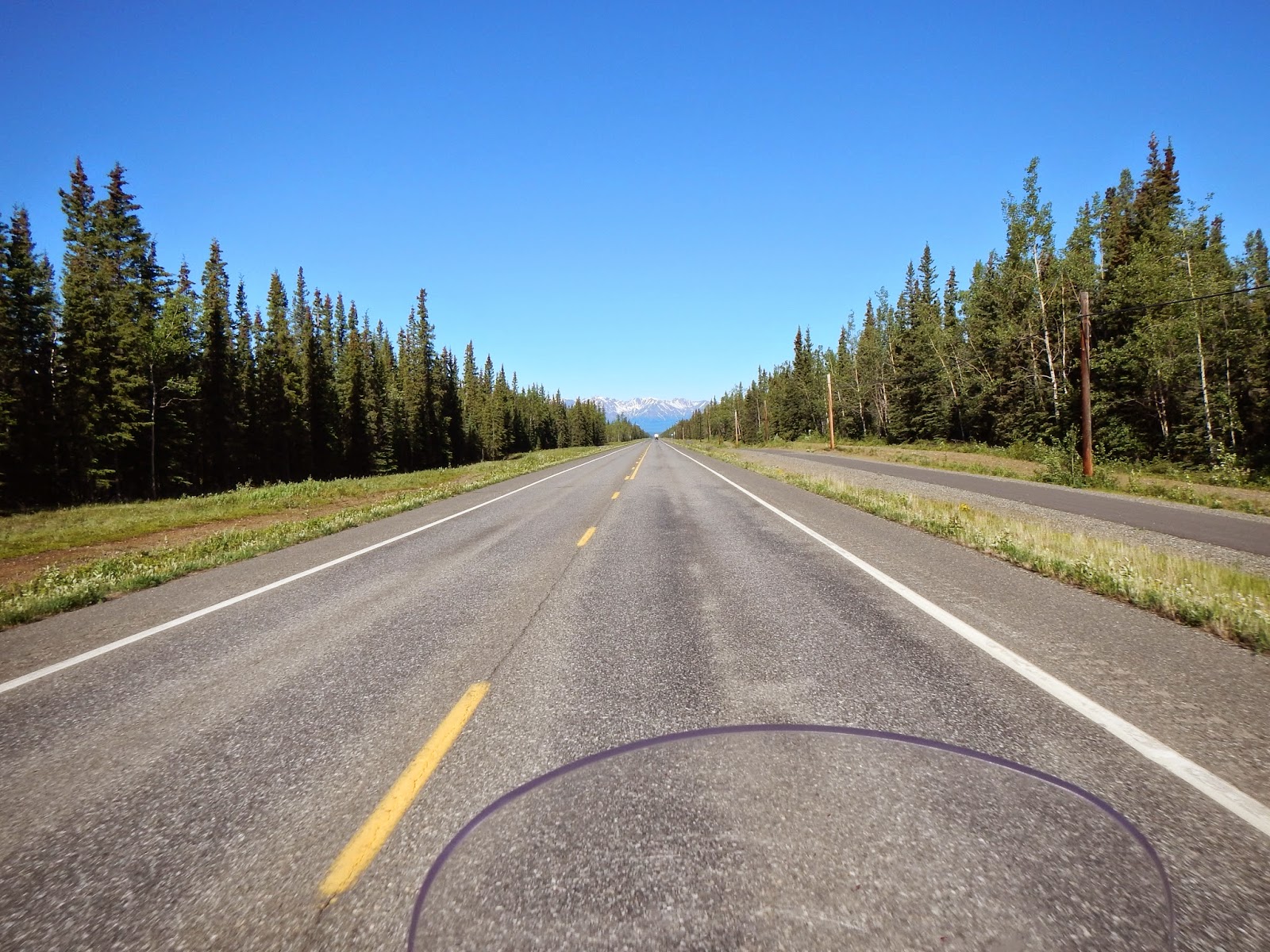 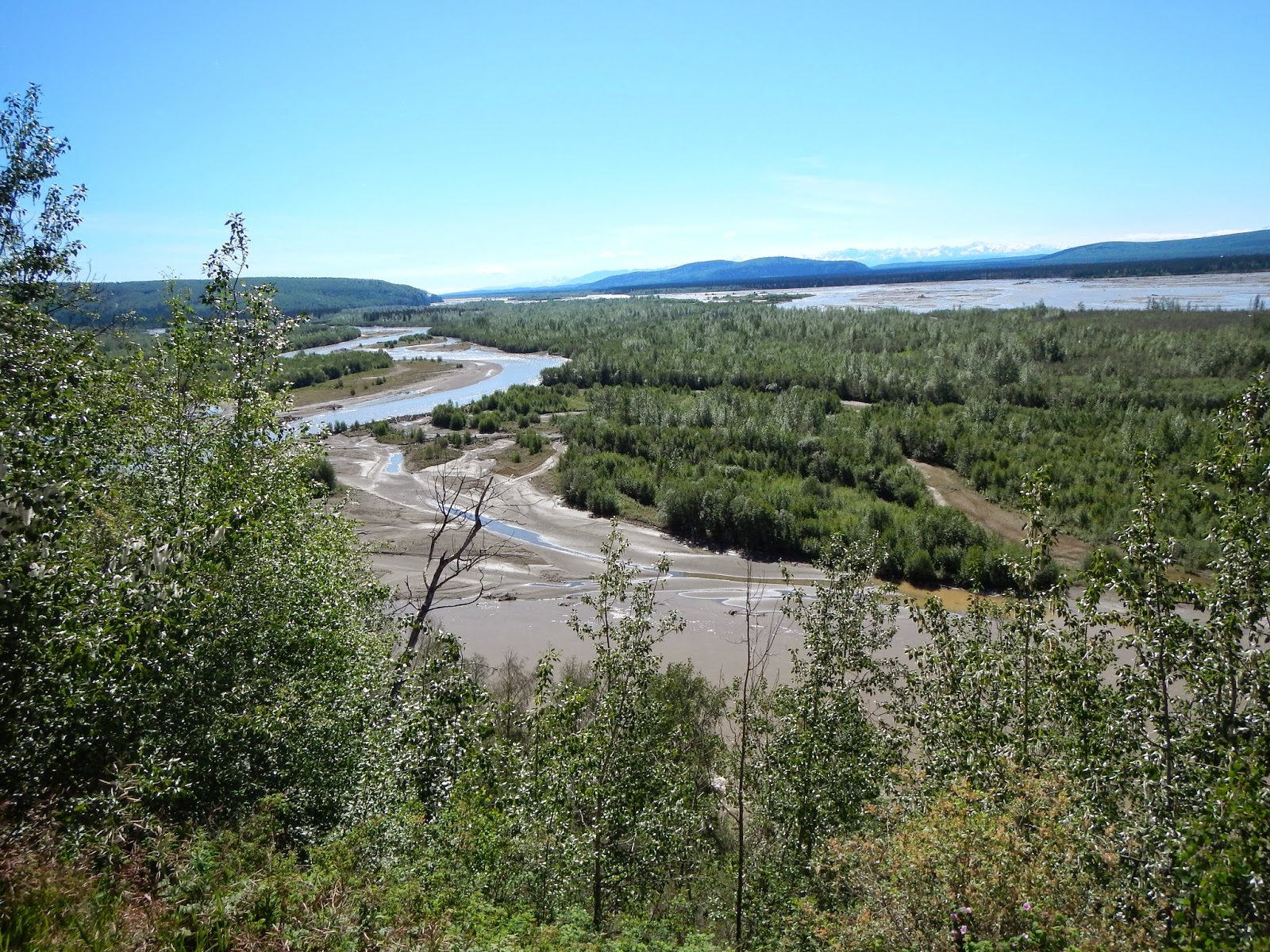 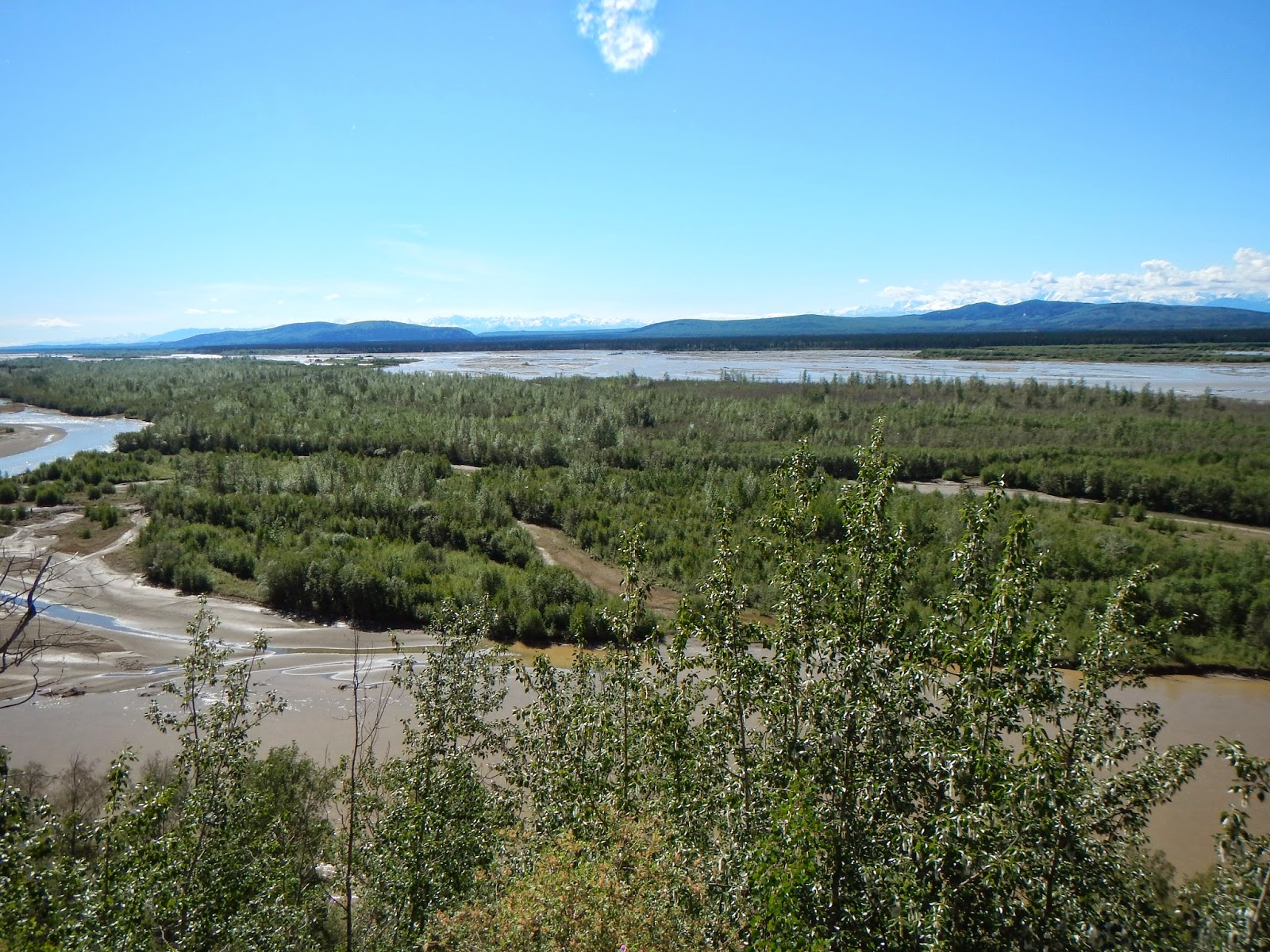 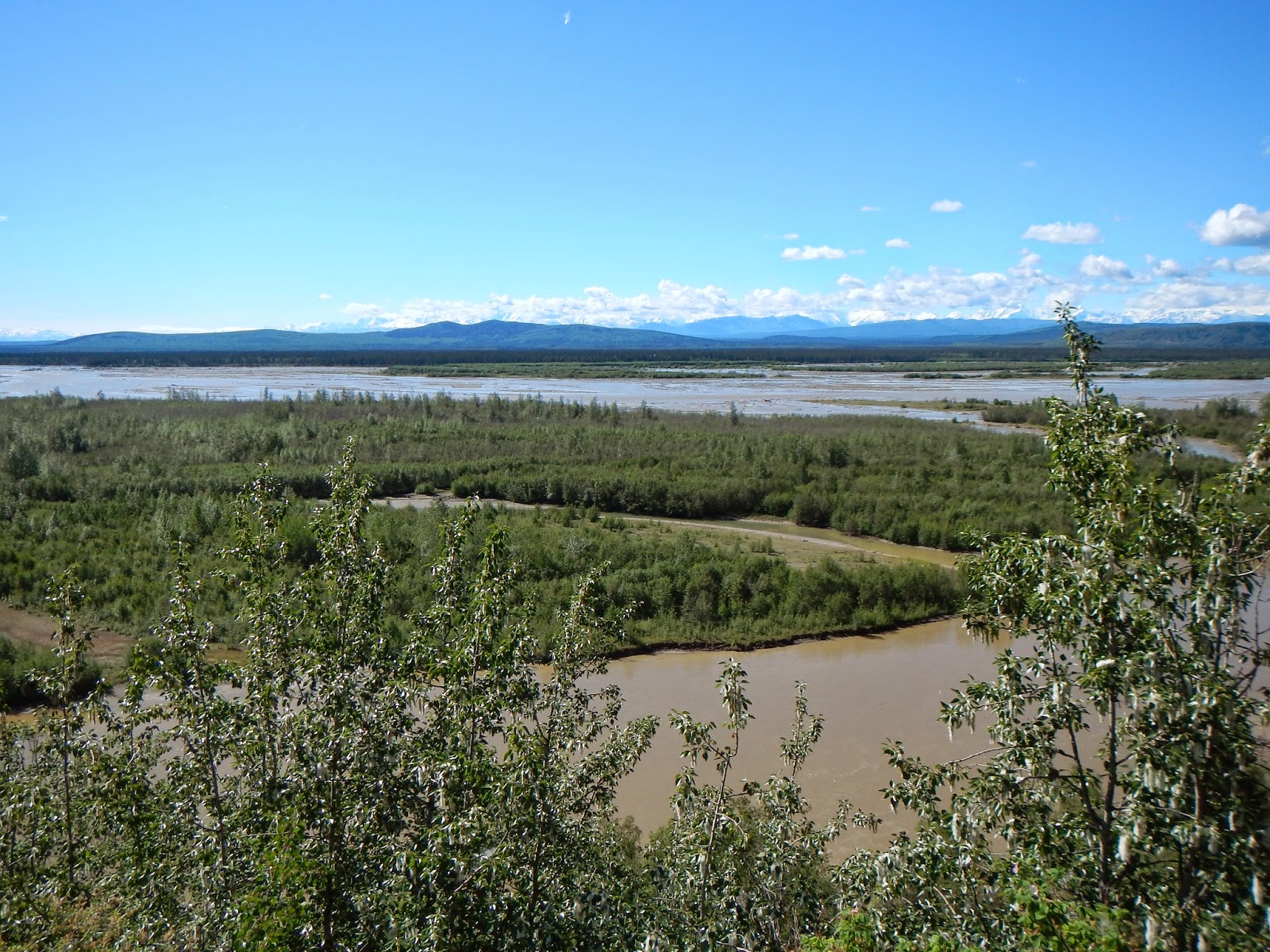 We rode on and finally got to the North Pole!!!!   We had to stop here to take a few pictures and have a late lunch. 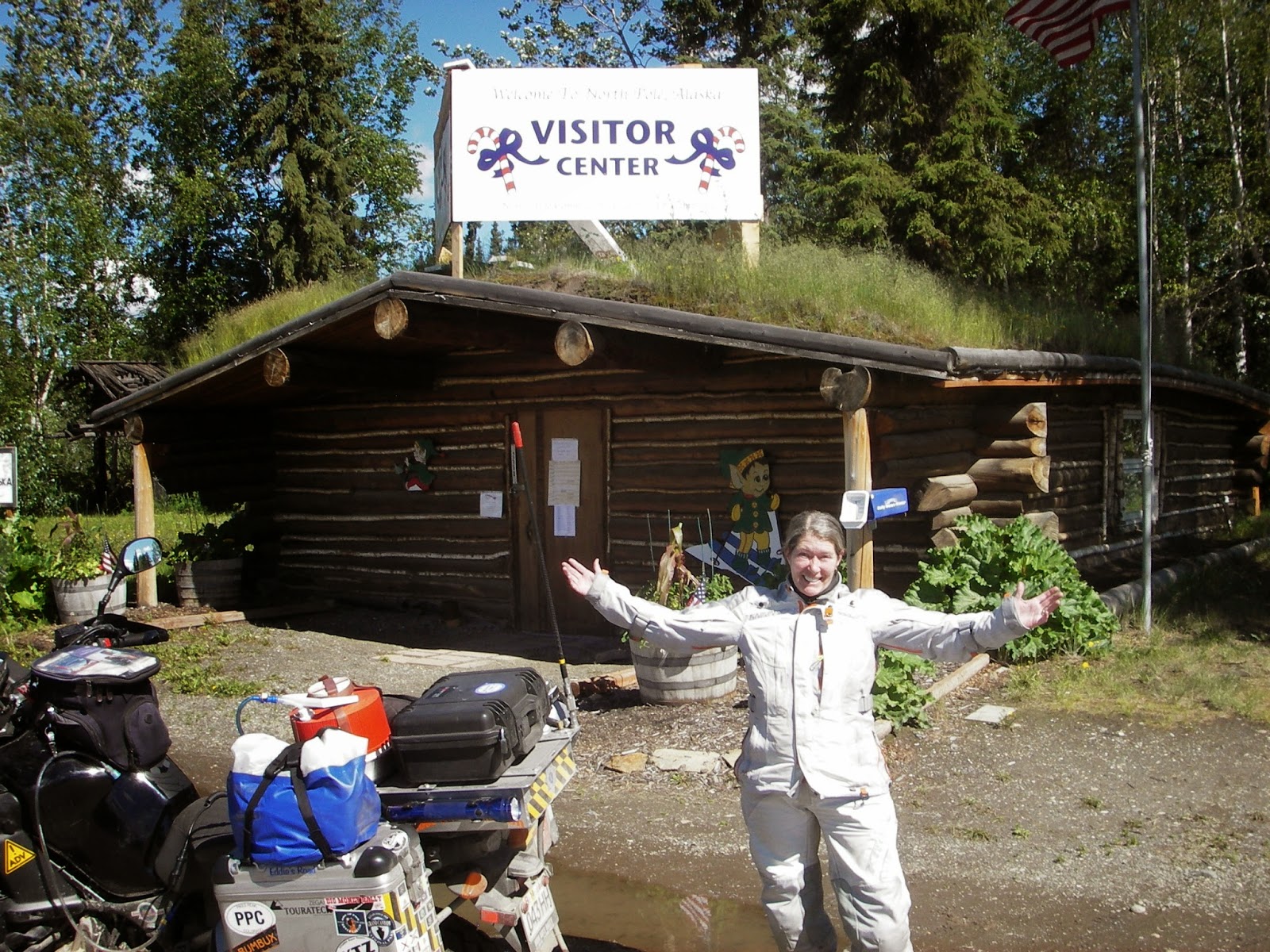 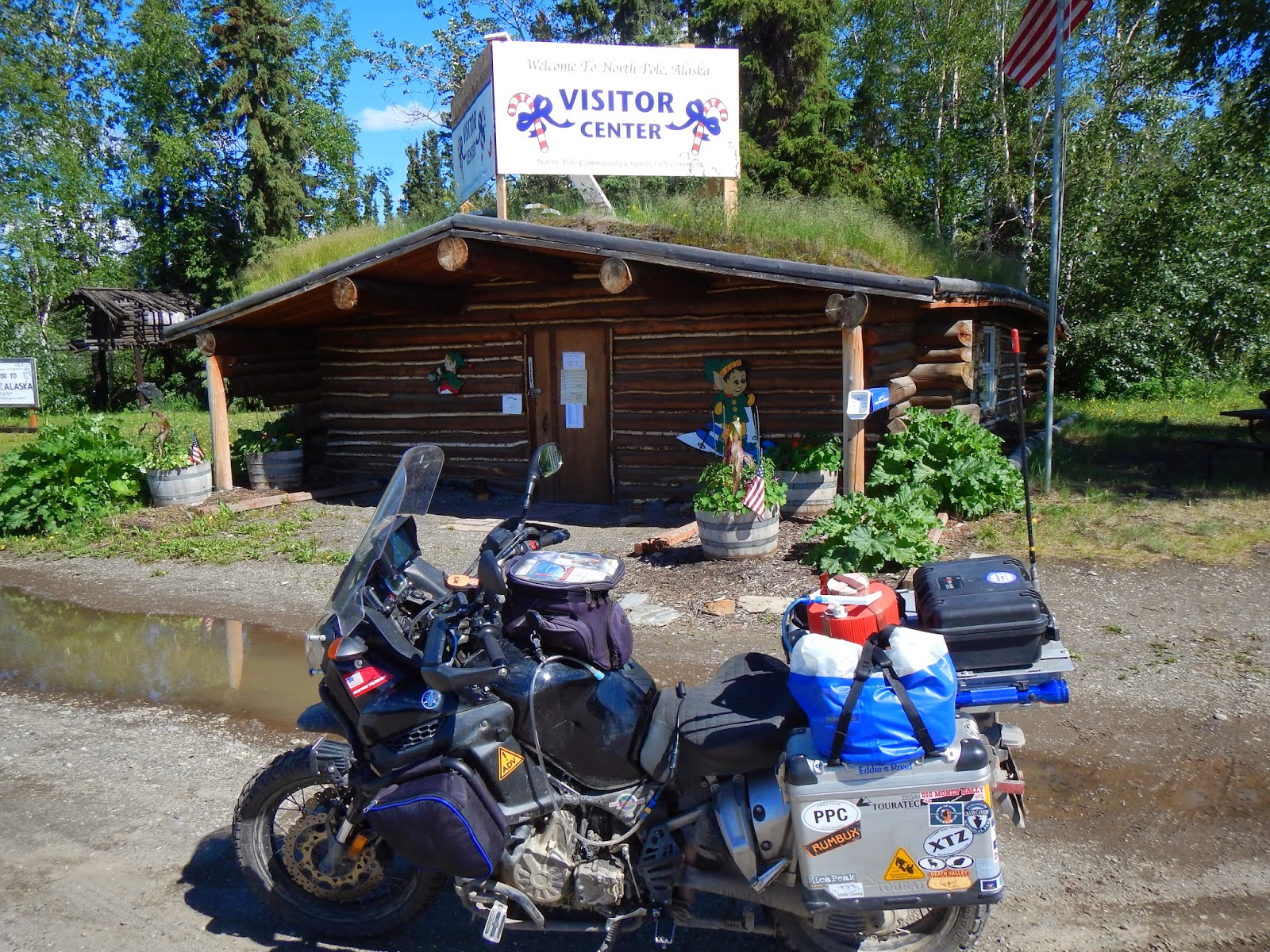 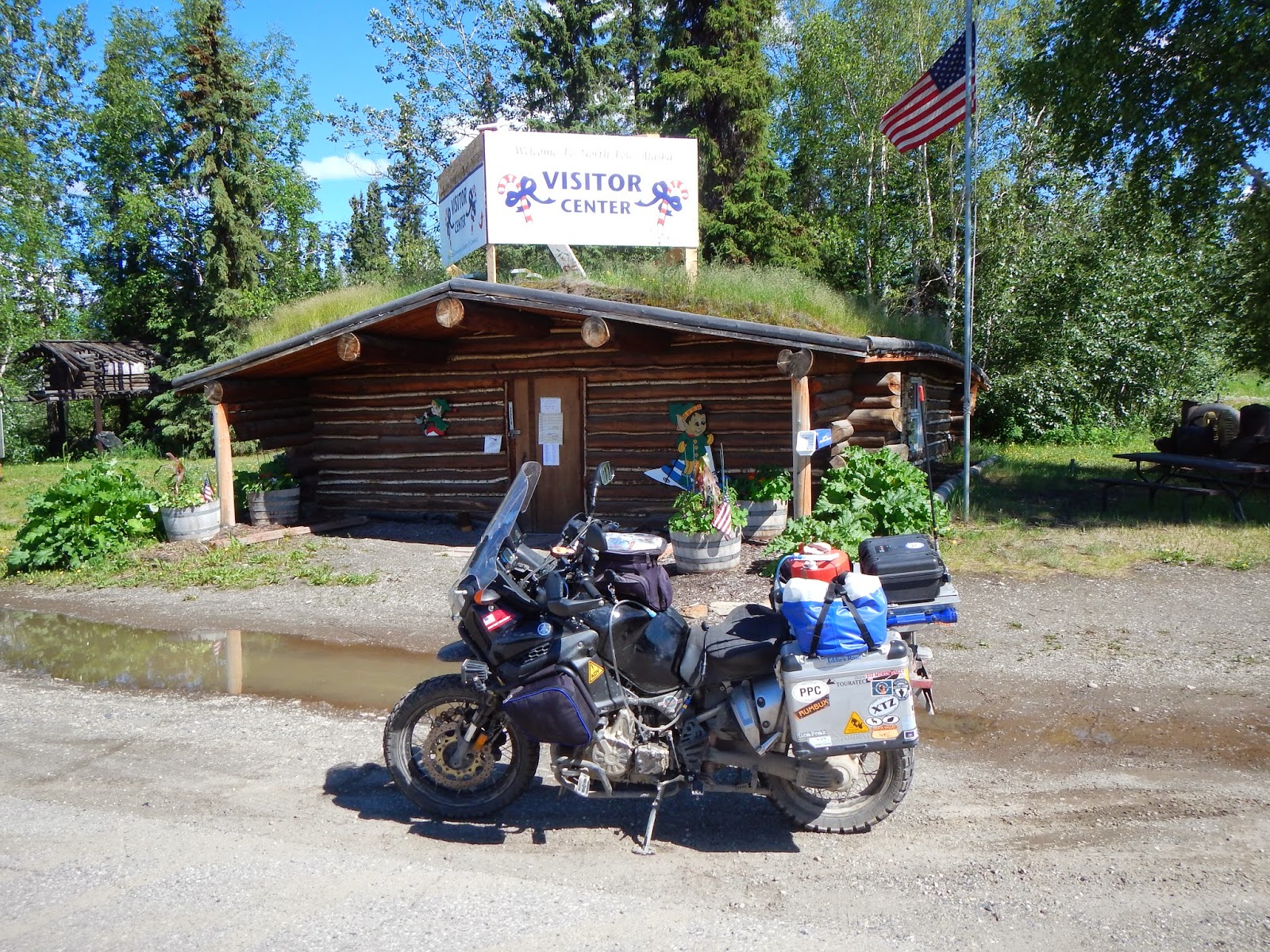 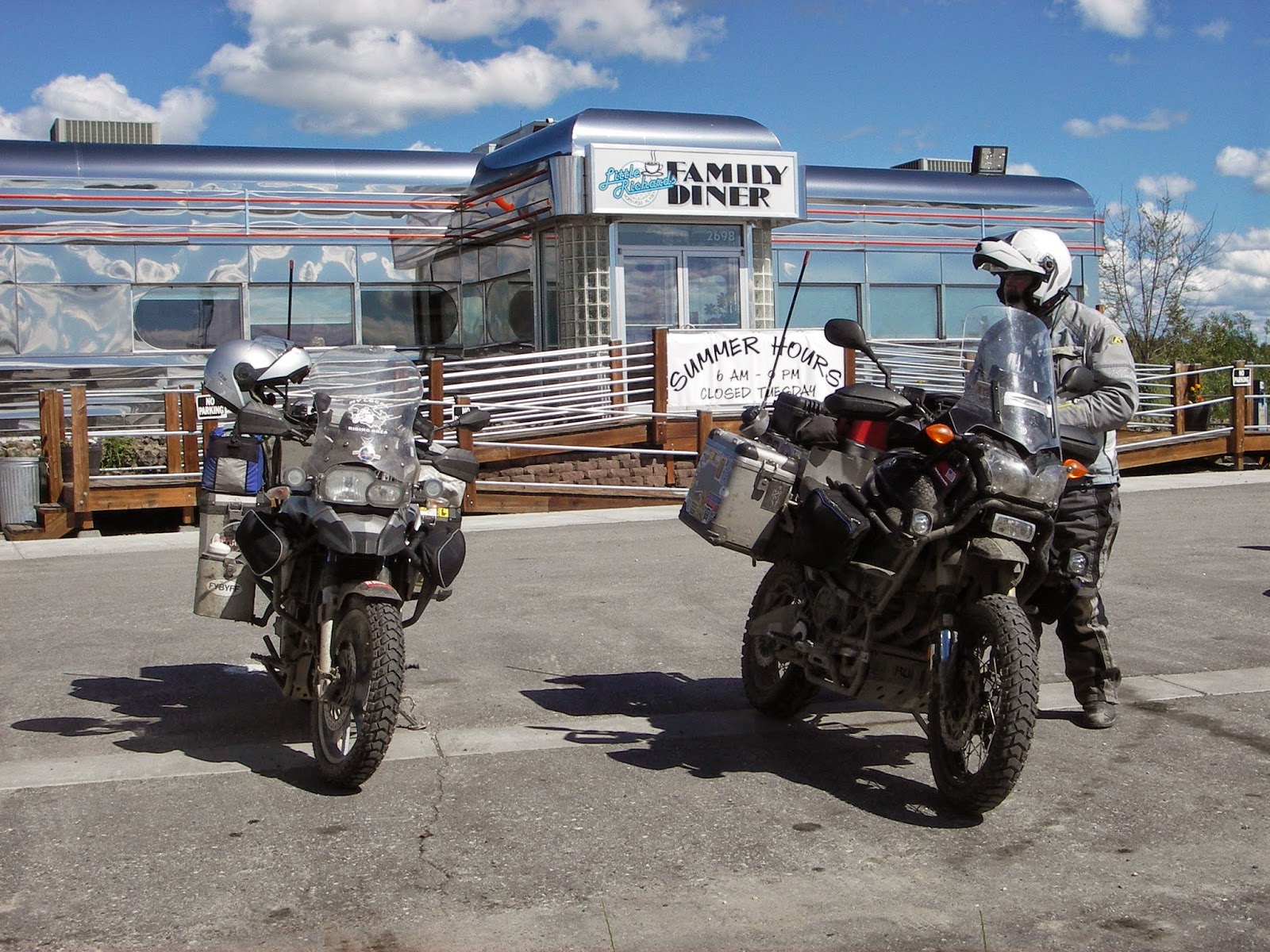 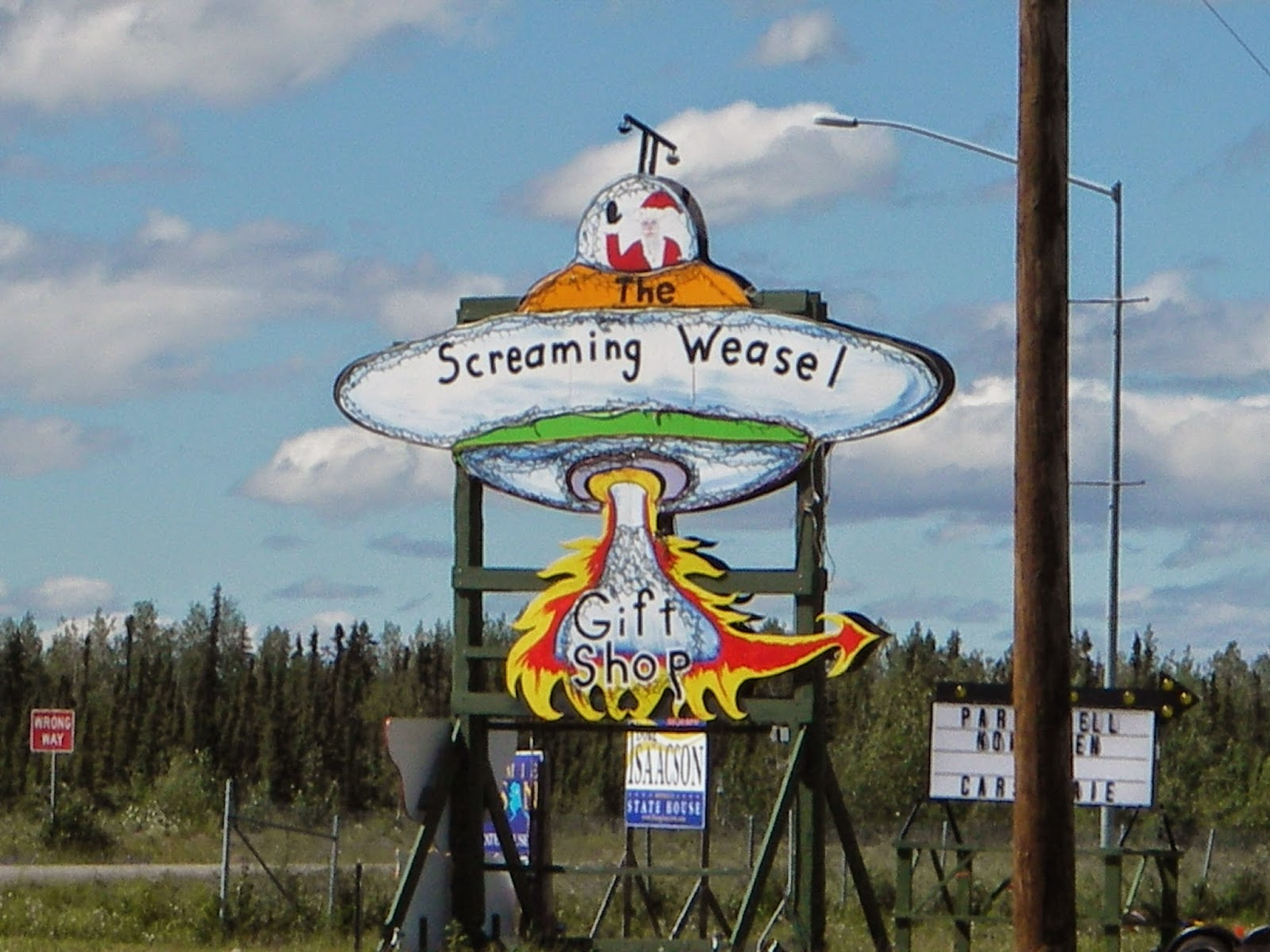 At this point I finally took off my heated jacket liner as the temperatures were in the mid-60’s.  Very pleasant.  We took off again and headed toward Denali which was our goal for the night.  Traffic picked up a bit but nothing too crazy.  Well, the ding-a-ling RV drivers who would go 45 mph and brake at every turn in the road were kind of irritating.   We quickly got past the worst of them only to encounter road construction.  For mile after mile after mile.  We would hit a patch of gravel then pavement then gravel then pavement.  Sometimes the gravel patches were only a few hundred yards and other times it went on for quite a long distance.  And it was rough, filled with potholes, then deep gravel.  Not really pleasant but after my trip over the Top of the World Hiway, I was ready for it J

We stopped for fuel and while I was gassing the GS, a couple asked about the bike.  We spoke for a bit and the fellow said he was an Iron Butt rider!  Wow!  He has done a huge number of certificate rides.  We chatted, they were up in Alaska on vacation sans bikes and having a grand time.  He asked my name and I told him and he laughed and said to his wife, “See, I told you it was her!”    Hahahahahaha.  What are the chances of a meeting like that?  So cool.  I now have two new facebook friends and fellow IBA rider friends.  It’s time like this that make riding all over the place so fulfilling.  I meet new folks with similar interests and just like that, a friendship is born.

Shortly after meeting our new friends, we found our cabin for the next two days.  We’re at the McKinley Creekside Cabins.  We’re staying two days because tomorrow we’re going to play tourist again and go to Denali National Park.  We’ll get our passport stamps and take the on and off shuttle bus through the park.  I’m really hoping the weather is as good tomorrow as it was today.  That would just be perfect!  So, an uneventful riding day with the good fortune of meeting new folks.  All is good and I’m ready to get some dinner and bed.  Looking forward to a stellar day tomorrow. 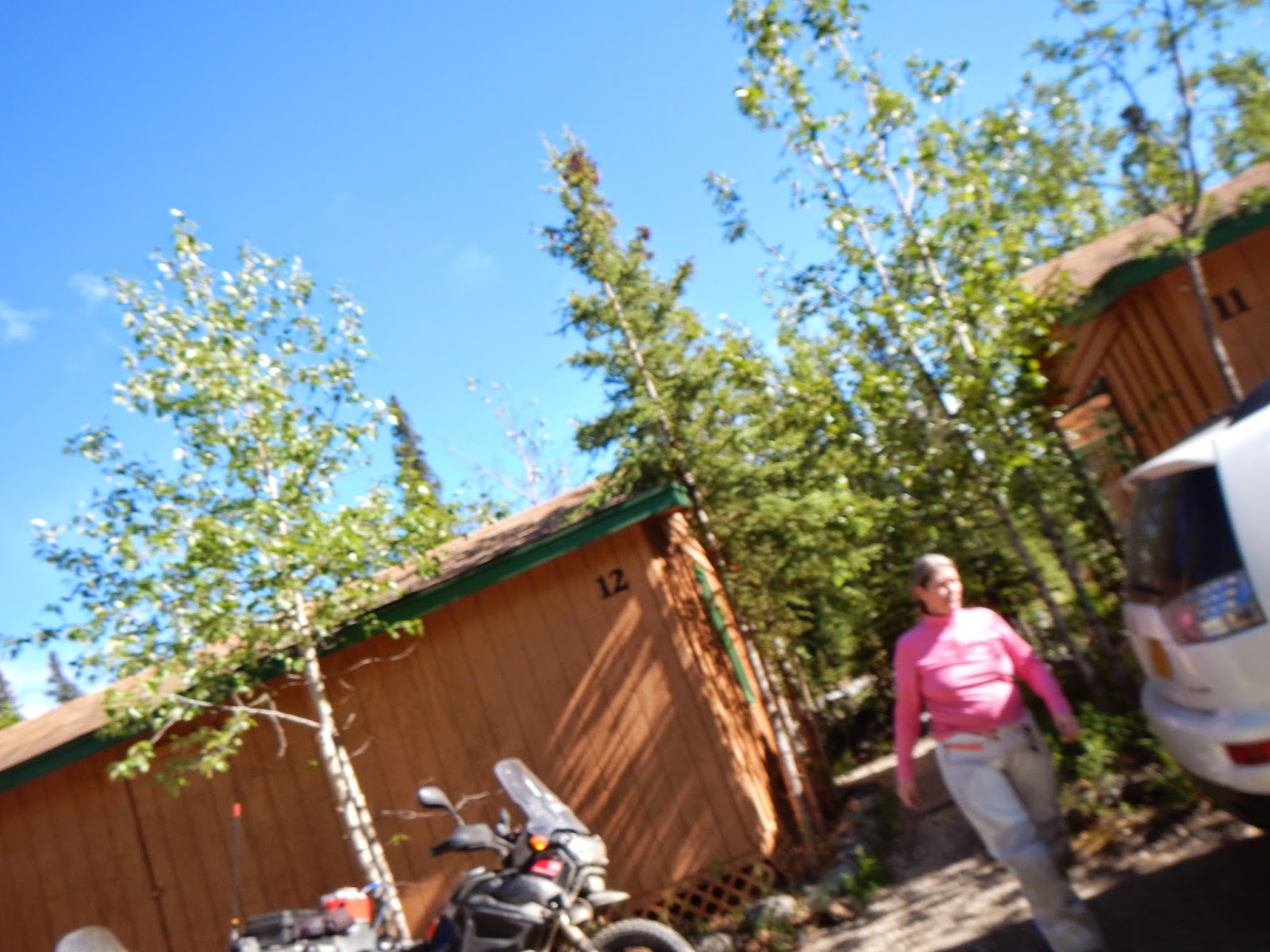 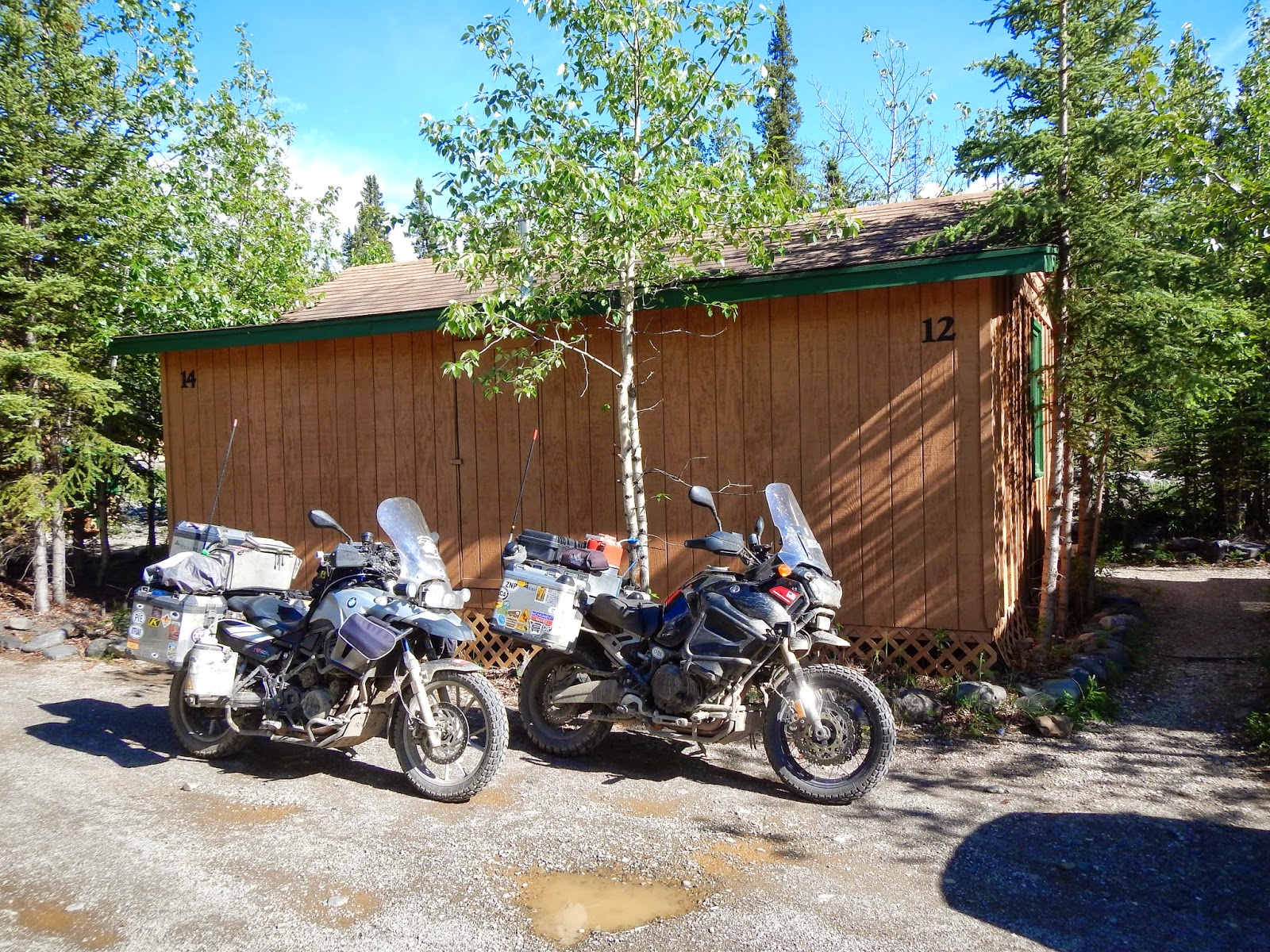 Here are some more random photos we took today. 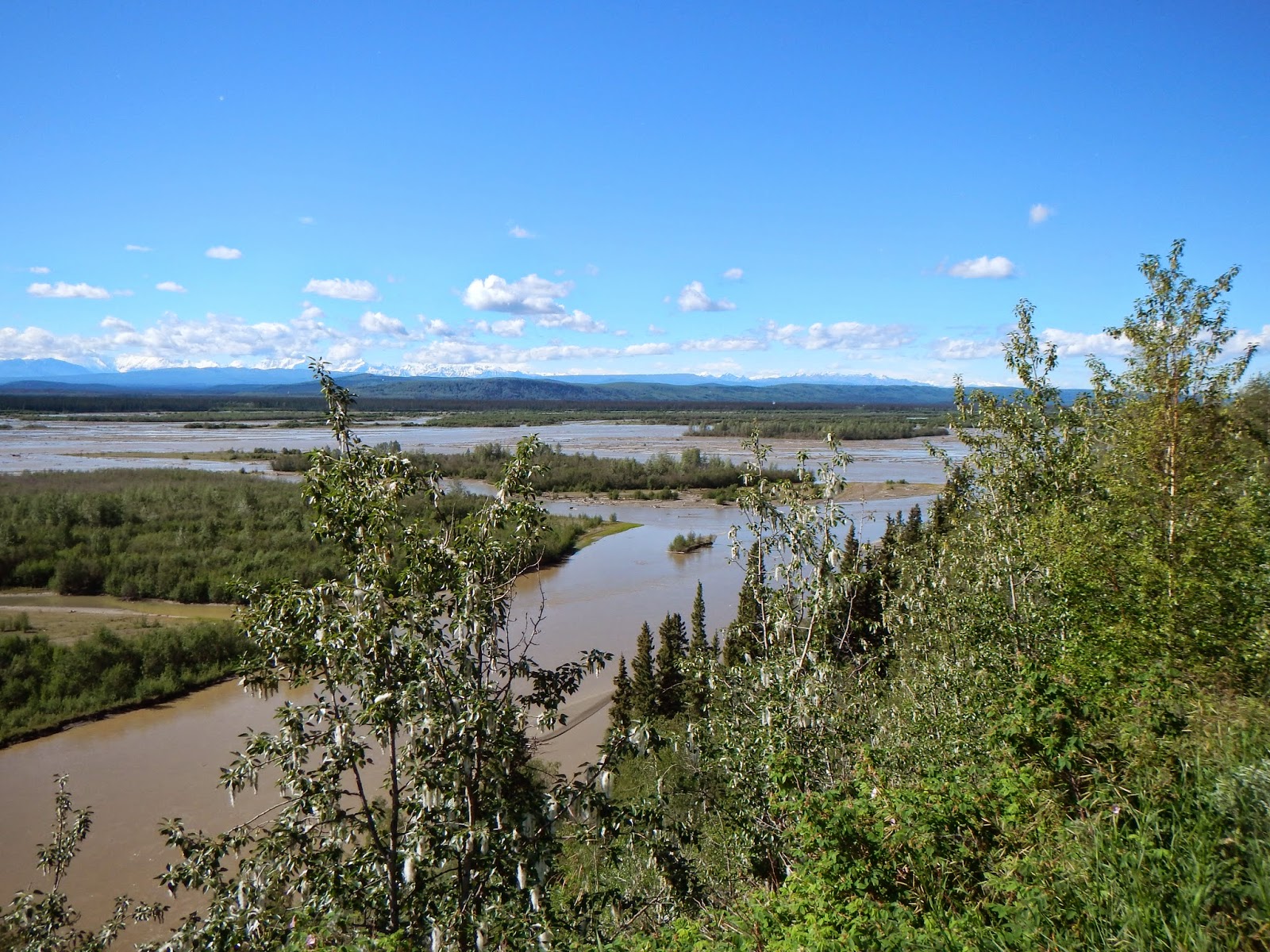 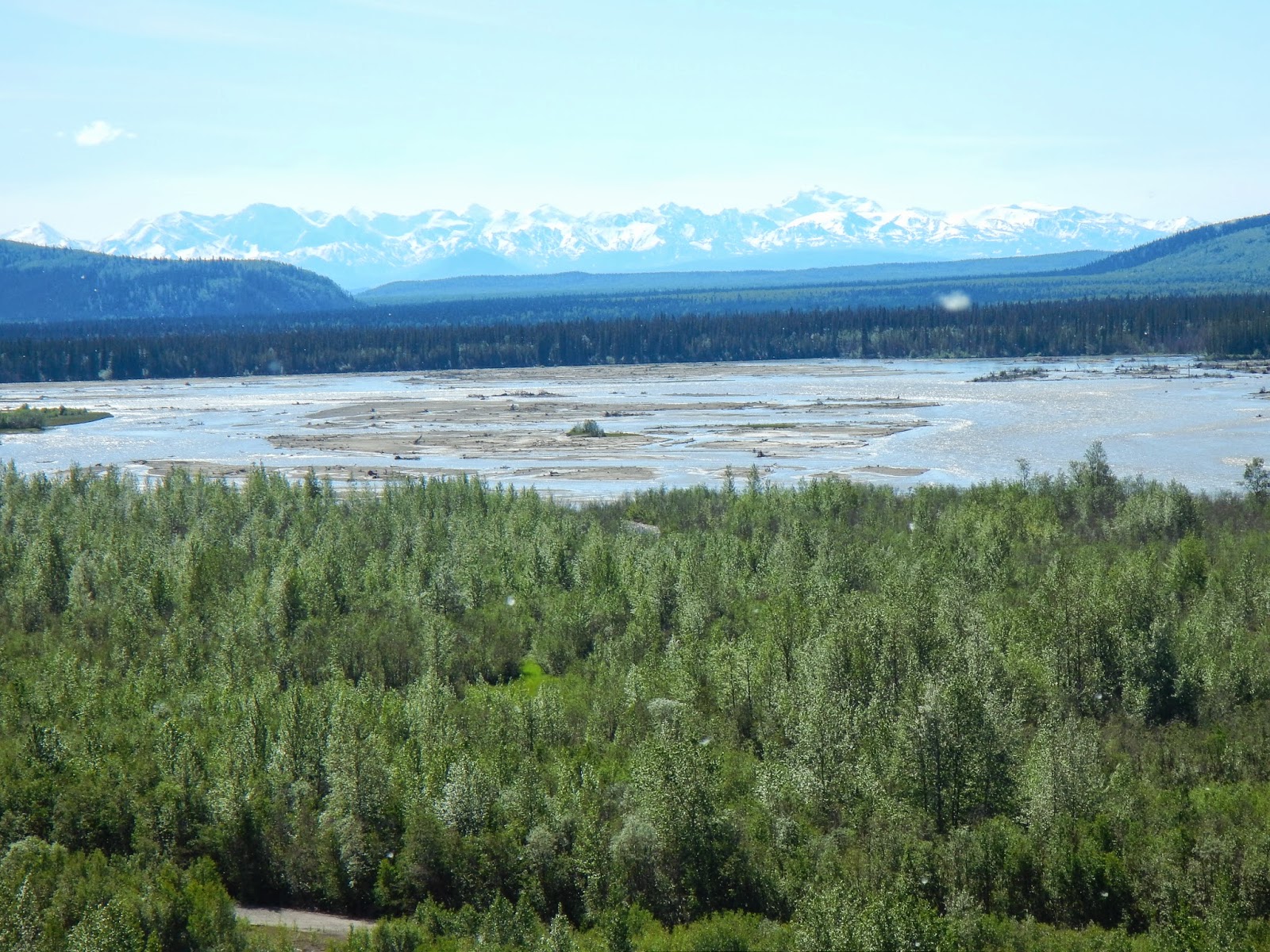 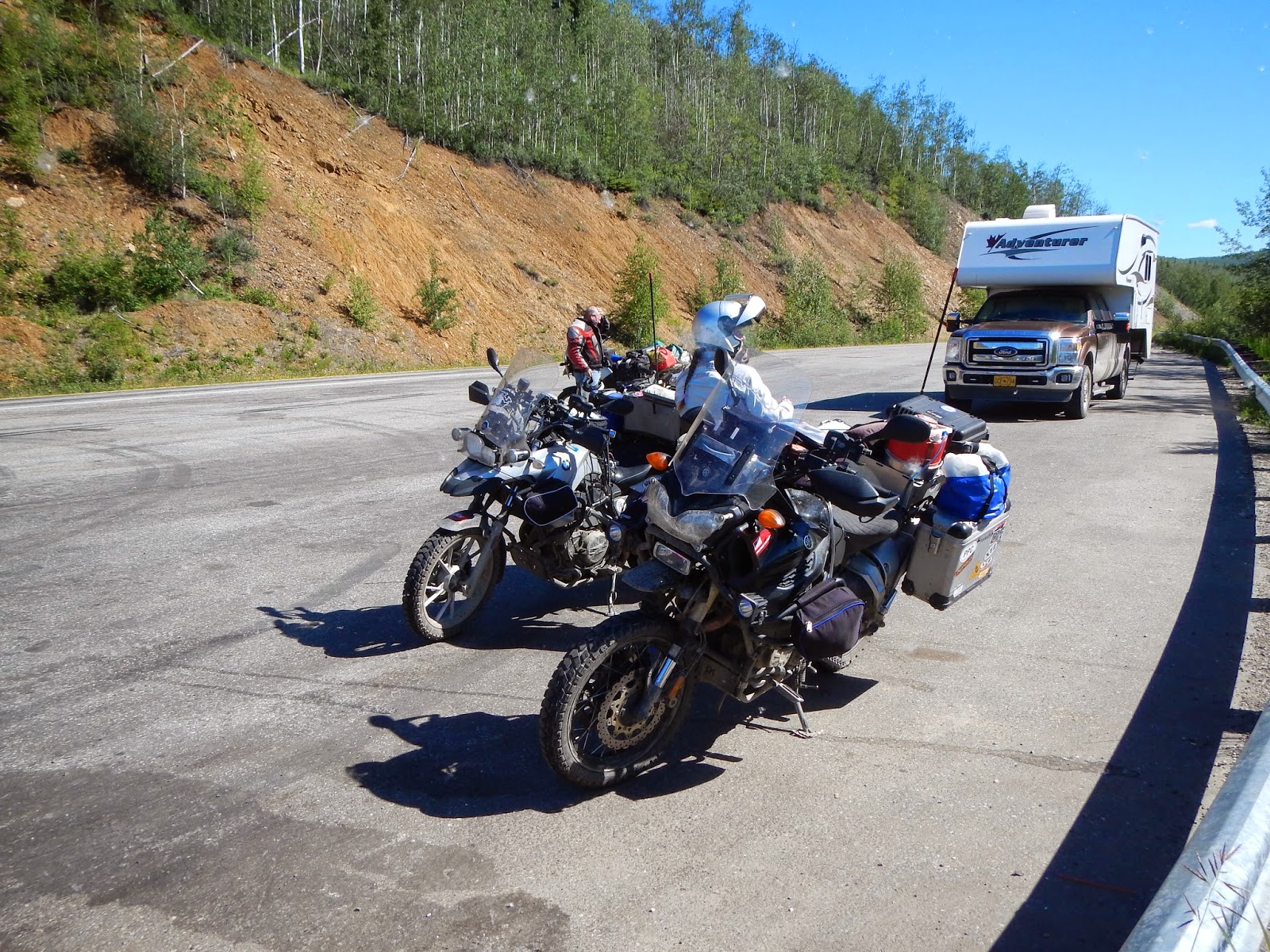 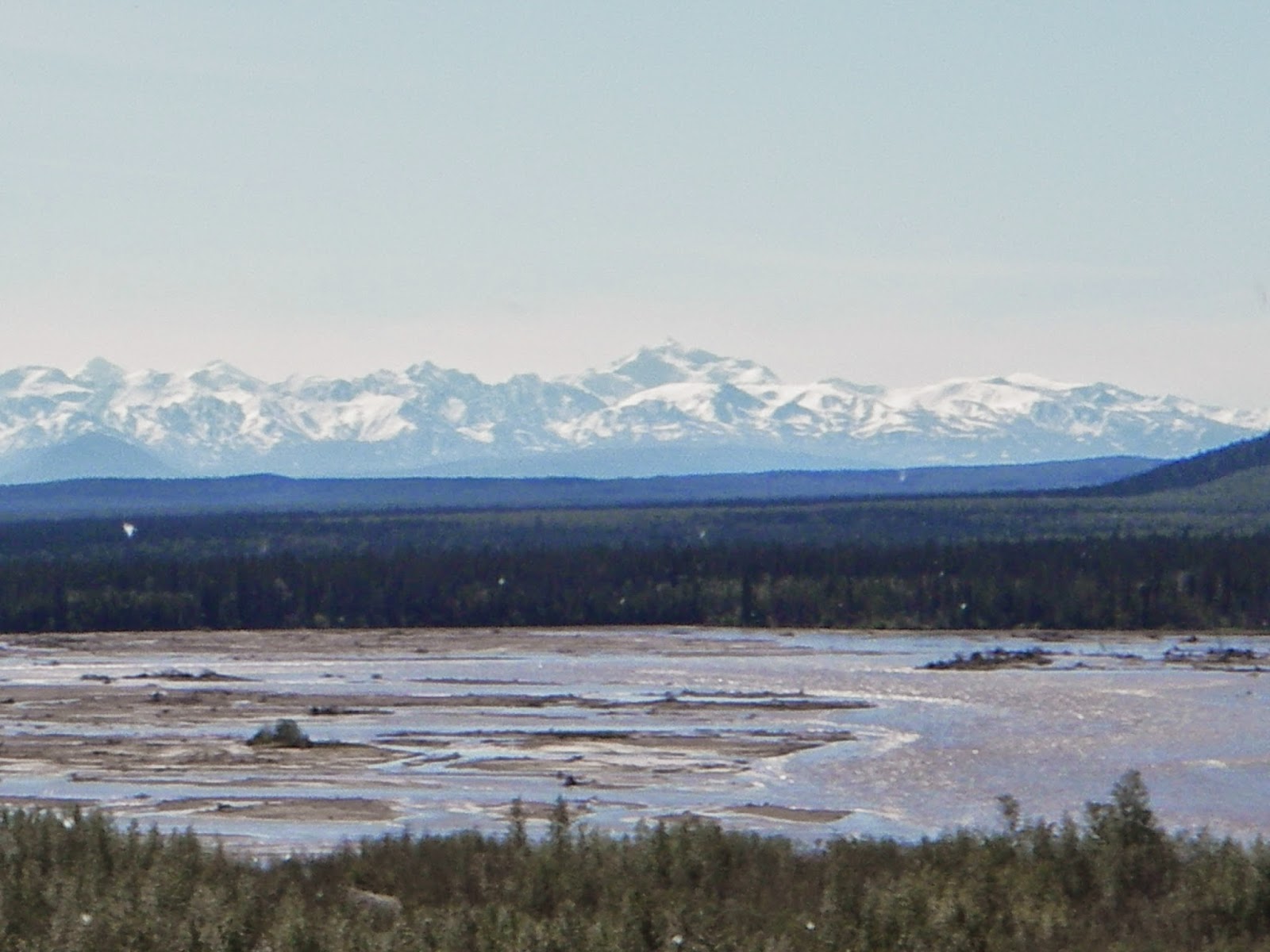 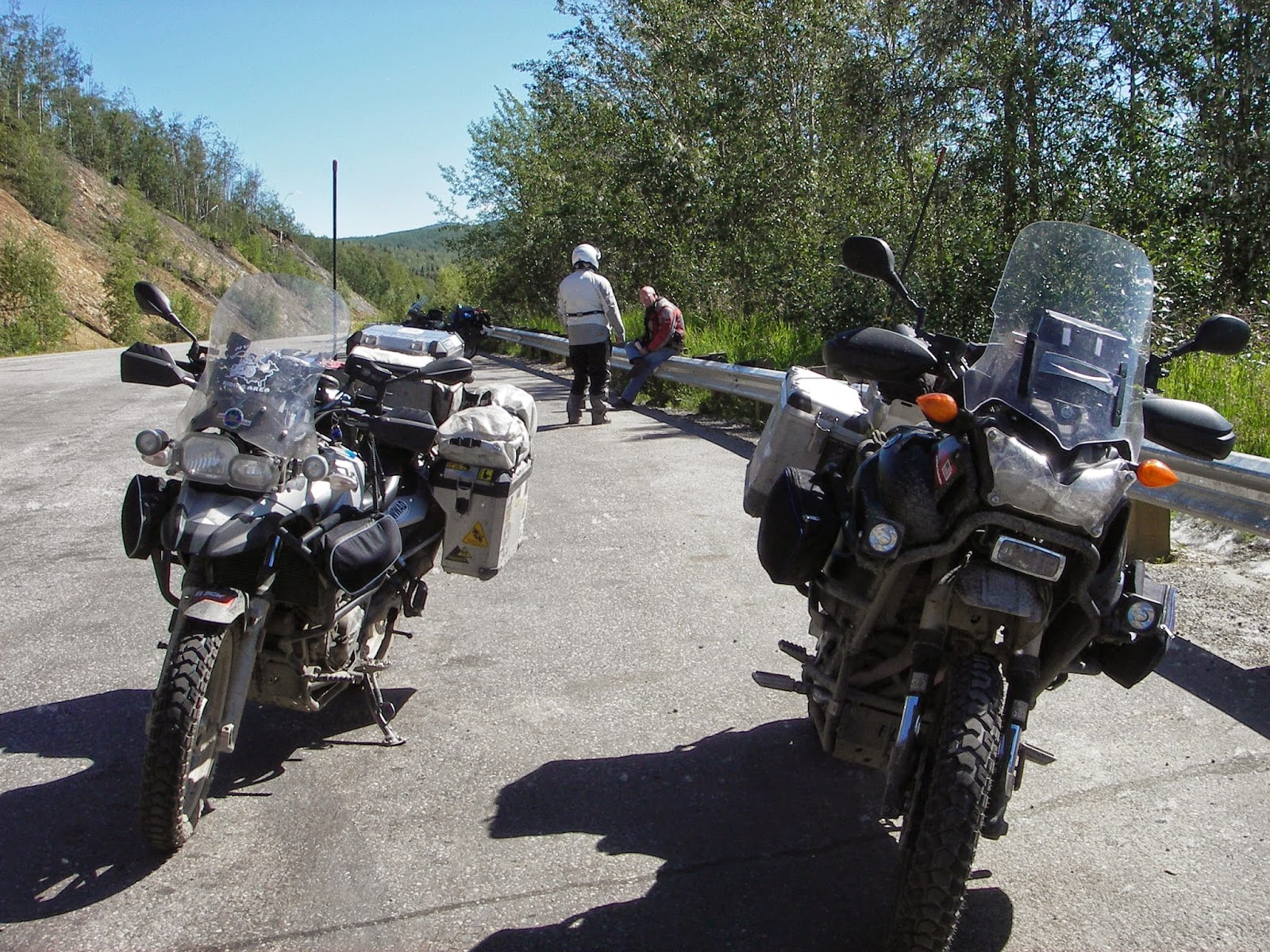 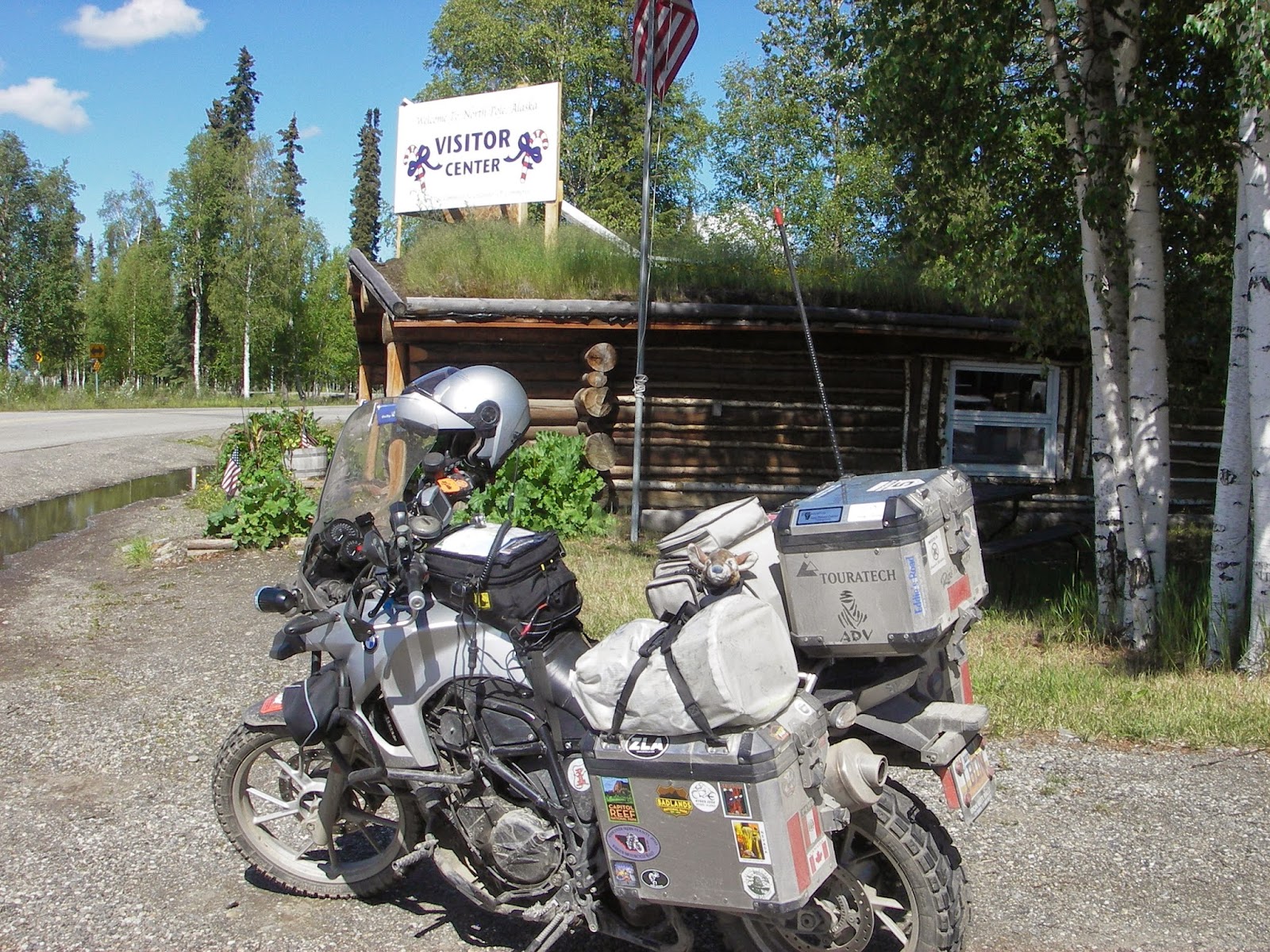